We have been venturing down to the Lakes for a week every month this year and October saw us based in Borrowdale again. It is supposed to be the wettest place in England, so it was chancing it to return when we had had 100% sunshine on our last visit. Surely the law of averages meant we were due for some rain? R had done something to his ankle on our September trip. In our GP practice, you can get a really urgent appointment, but he didn’t even bother going and waving his ankle at the triage nurse, as he knew it wasn’t urgent enough so didn’t see the GP until the day before we came away. GP poked it, said it didn’t seem broken, prescribed ibuprofen gel and said keep walking as much as he could. There are so many blow-by-blow TRs on this area that I have only submitted a sketch to give the flavour of one particular week.

On the first day, we drove as high up as we could before staring the walk. The Honister pass is probably high enough. We followed the path towards Great Gable (1st pic) then veered off towards the mine when it reached a cross-roads( 2nd pic). We waved off a party of Ramblers on a paid walking holiday towards Great Gable. The path led to Honister Crag where we could look down and see part of the Via Ferrata (4 & 5, past a lochan (3) and then to the summit of Fleetwith Pike. (Big pic). Several people came and went while we had our lunch, one couple volunteering to take our photo 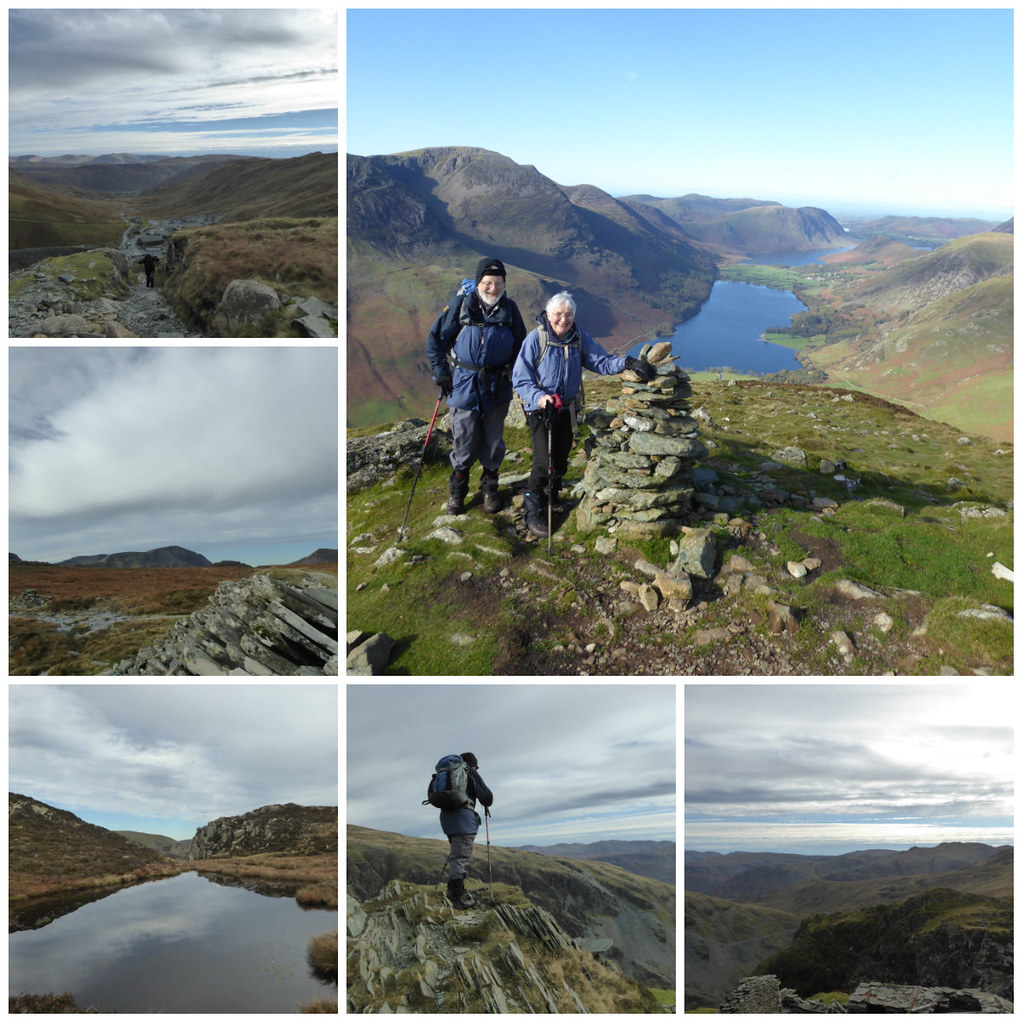 The ankle was OK, but we didn’t want to tempt fate, so went back via the mine. 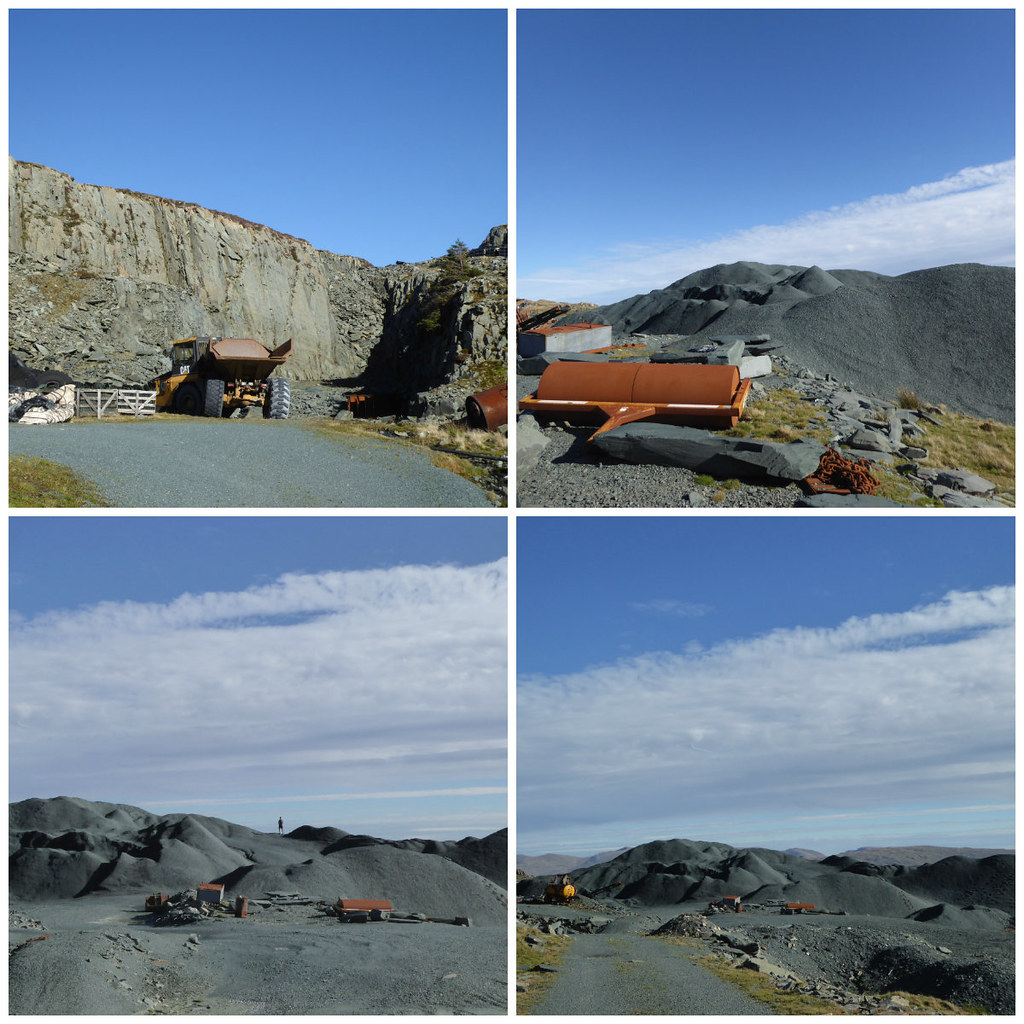 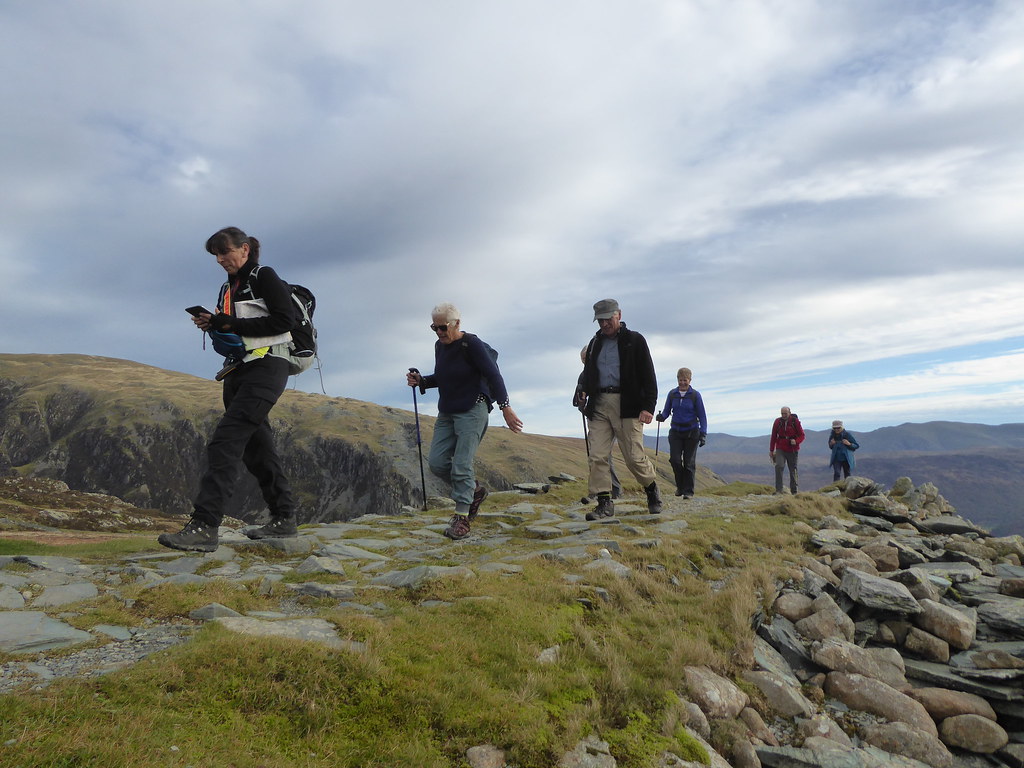 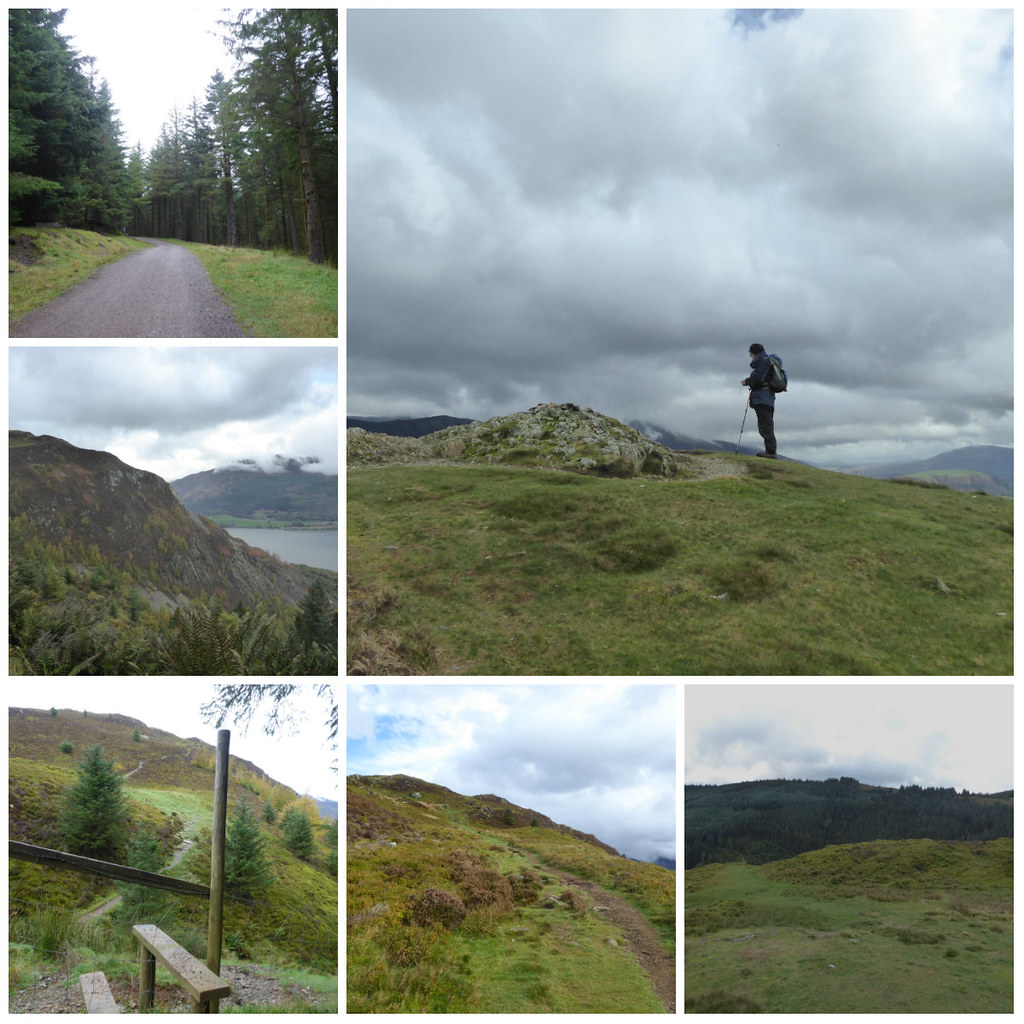 Encouraged by yesterday’s trip, we decided to adopt the same tactics, driving this time to the Whinlatter Pass. They are mending something near the Braithwaite end, and we had to drive all the way round via a meandering diversion that went through Cockermouth and back under the main road. This has been going on since Sept 10th and they plan to continue until the end of November. Apparently, badgers caused the problem.

There is a Forestry Commission Centre at Whinlatter Pass, where teenagers can Go Ape, kids play in a play-ground and mountain-bikers can struggle round trails without getting lost due to their junction numbering scheme. We bought one of their maps so we could get through the forest despite all the new paths and tracks that have appeared since our map was printed. The track took us round an intervening hill (1) until we could see Barf(2). The track dipped down to cross a fence by a stile (3) and then up easy tracks (4 & 5) to the summit. 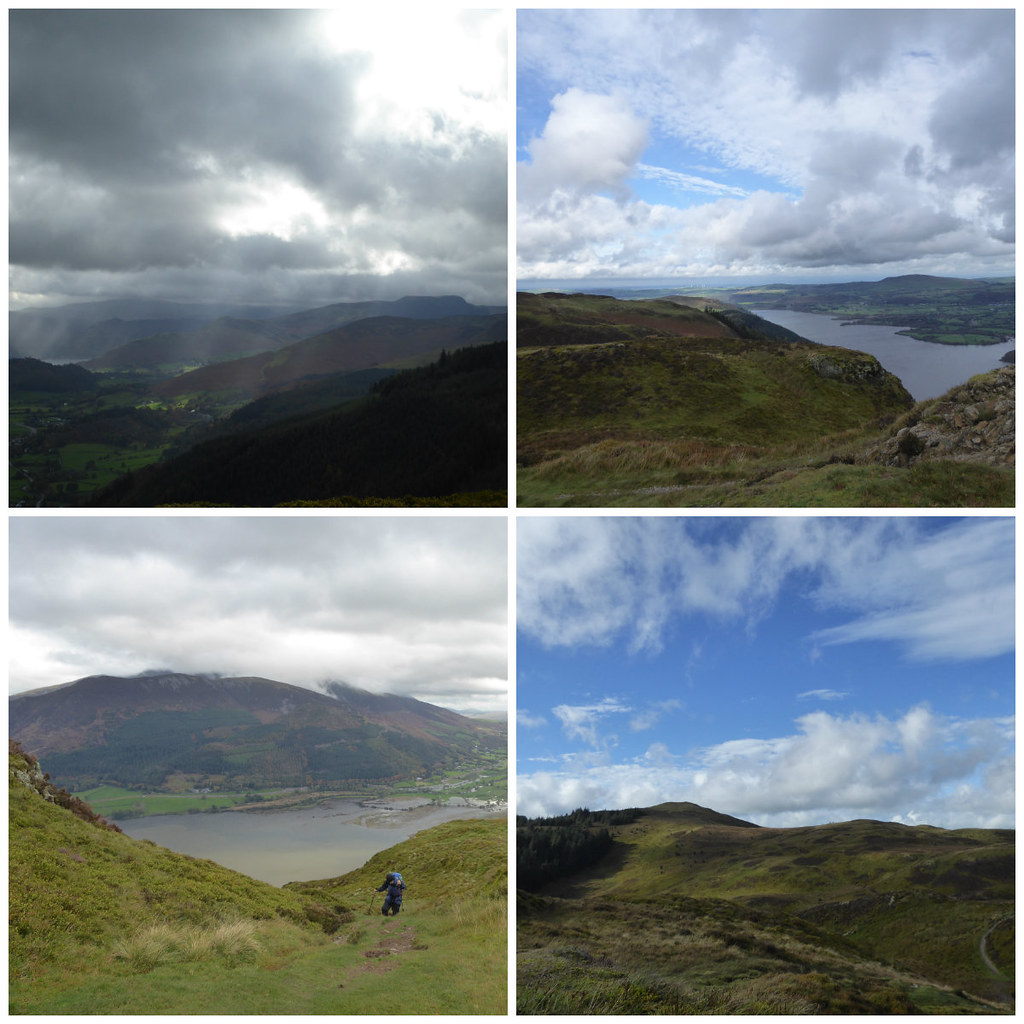 From here we could see that the rain was taking advantage of our absence and falling on Borrowdale, but the view towards Scotland was clear. A couple had come over from Lord’s Seat and told us they had nearly got blown over there, and as we had climbed it as a Marilyn in the past, we decided to return. R’s ankle was still bearing up. 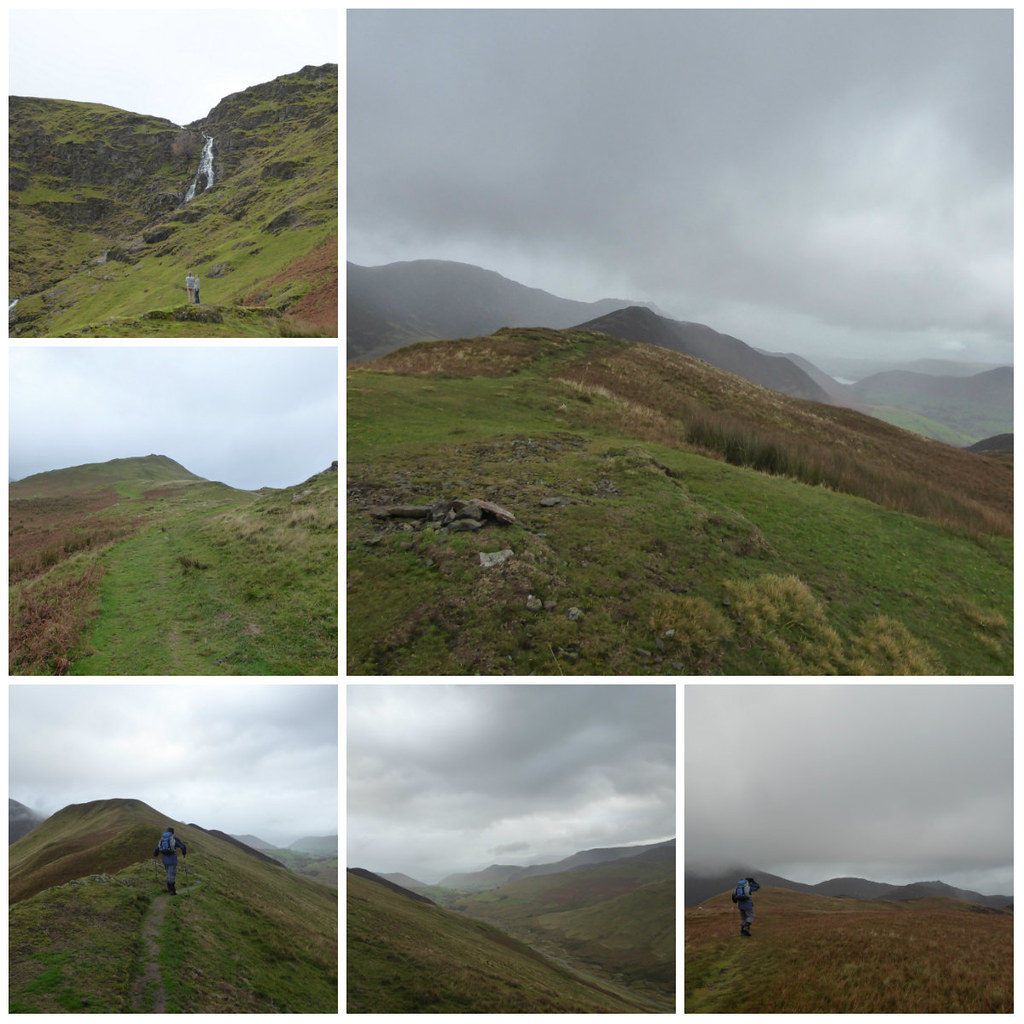 Driving to a high point and then carrying on had suited us so far, so this time we decided to try the Newlands Pass. We had just got into our gear when a car stopped and a guy shouted “Where are you going?”
We pointed uphill, “Jesus!”
“Where do you come from,” we asked on hearing the American accent. “Ohio!”
“Do we know anyone in Ohio?” I asked Realsquiz.
“You do now,” he said “ The Stovers!”
“Oh, I said, we’ll keep an eye open for you in the newspapers.”
His wife leaned out and said “We’ll be the ones protesting Mr. Trump!” and away they drove. (

That man gets EVERYWHERE, but I promise I haven't mentioned Brexit {whoops, I just did}] 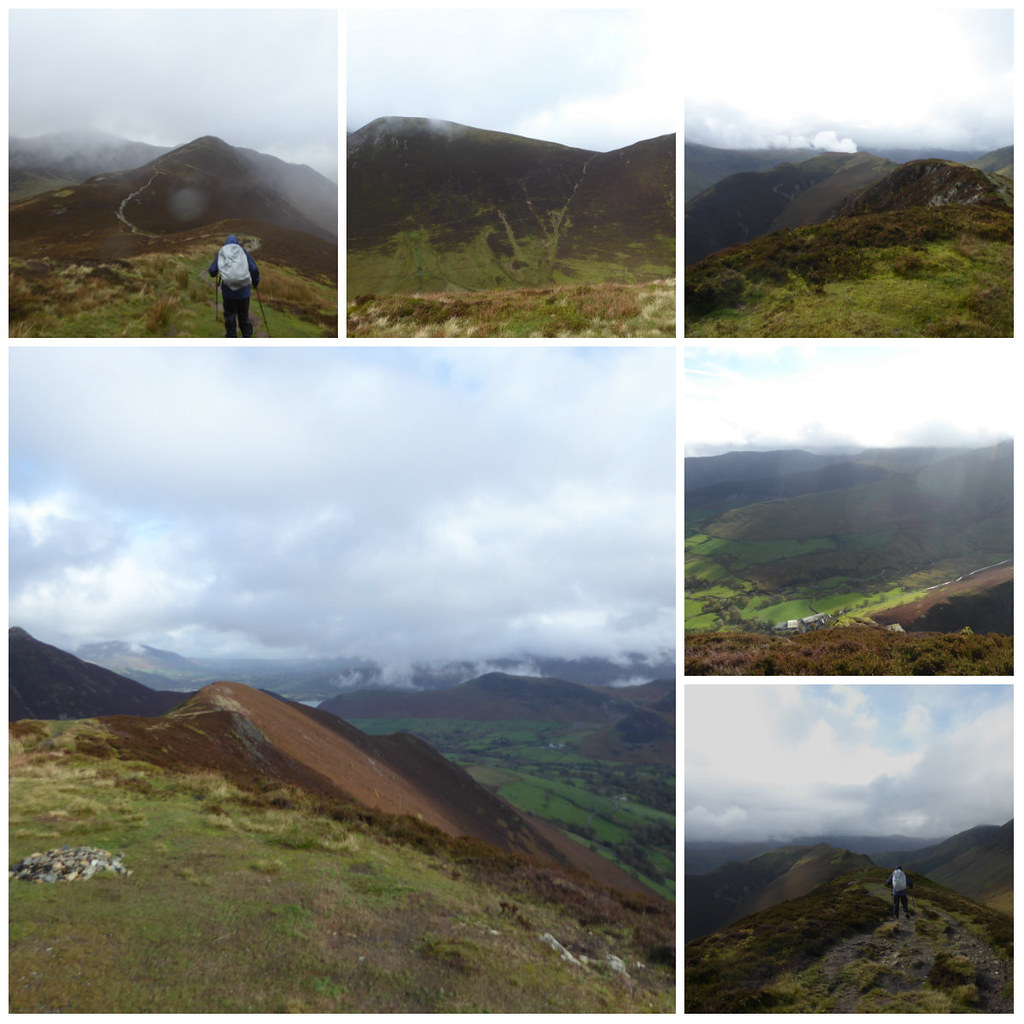 We met 2 guys who had come up from the farm(1). Their friend’s misfortune was their good luck, since it enabled them to do a linear walk. He had twisted a knee and pulled a ligament mis-stepping on a rock. We wandered back again (4,5) 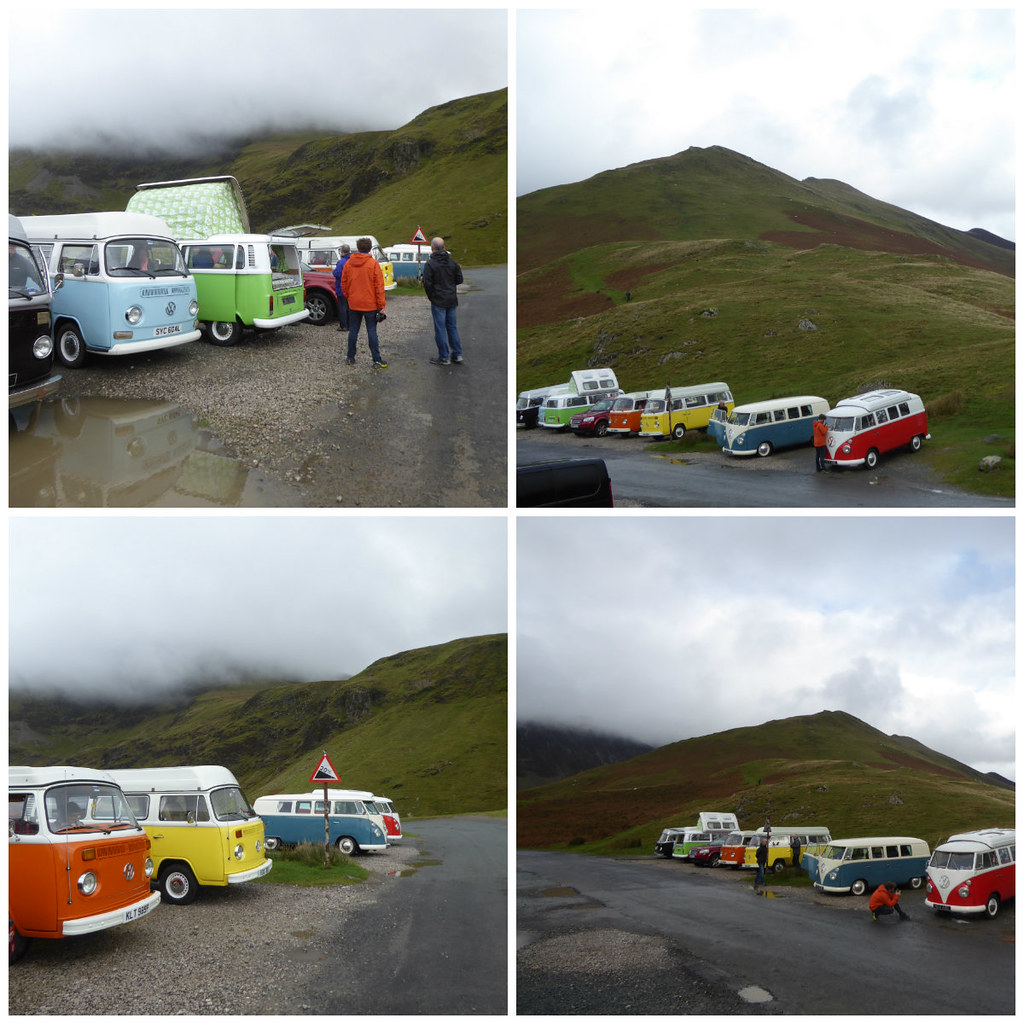 On our return, we found a woman who owned a VW rental firm in Keswick had put out a facebook message asking former customers if they would like to help in a photoshoot. While we were descending they had all been arranged on the steep bit of the pass, but now they were parked up before each in turn had a photo against the waterfall. 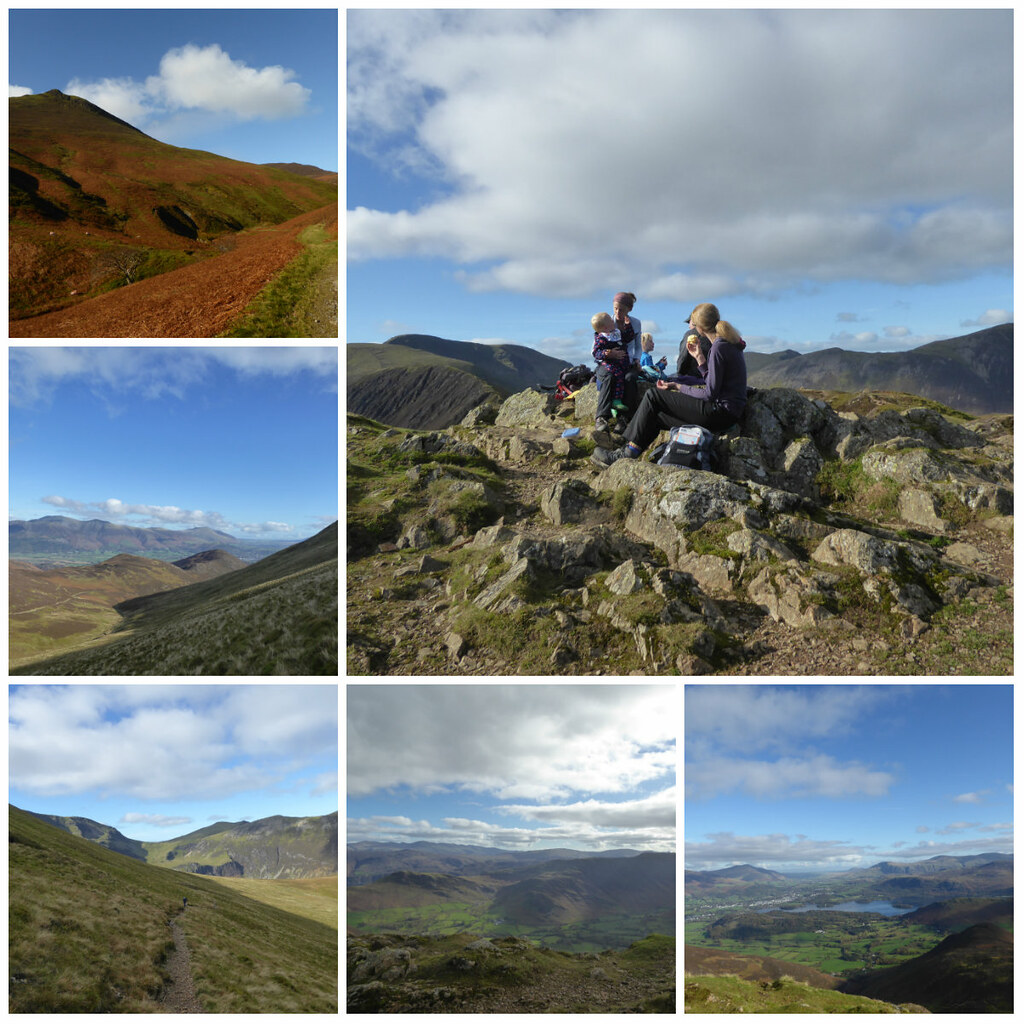 There was a wonderful forecast for today, so we decided to spend it fairly high up and picked Causey Pike. We parked in the car park at the bottom of the miners’ track near Stair and set off up the long trail (1) until we were beyond Outerside (climbed in high wind on our last trip). Here an easy track leads back to the summit(3). We could see to Keswick (2) We were just sitting having our lunch when a small head popped up, followed by larger ones. A girl, who turned out to be four, her Mum, Aunt, Dad and two year old brother in a carrier had climbed up the steep scrambling route (6) Views (4 & 5) 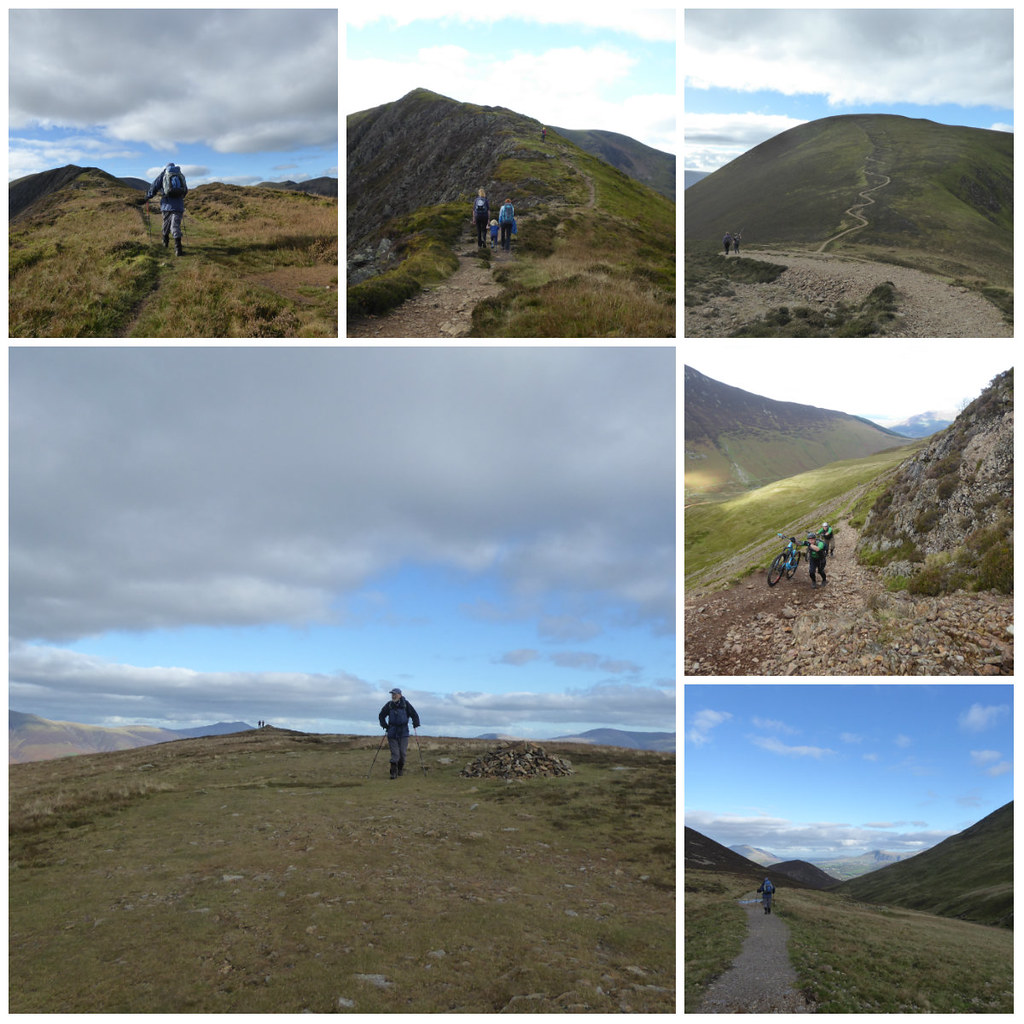 We walked across to claim the half-way point in our Wainwright tally, the rather unexciting Scar Crags (1). But not before being overtaken by the four year old and her family (2) That ankle has a lot to answer for, but R didn’t have two much larger people to hold his hands and swing him along. . We didn’t even stop at the cairn but had walked past it before we realised that must be the summit (6). Some other walkers were carrying on to Sail (3), but we headed down. Here we met some mountain bikers heading up (4) There must be a lot of pushing on this route. Then we set off down the miners’ track again (5) 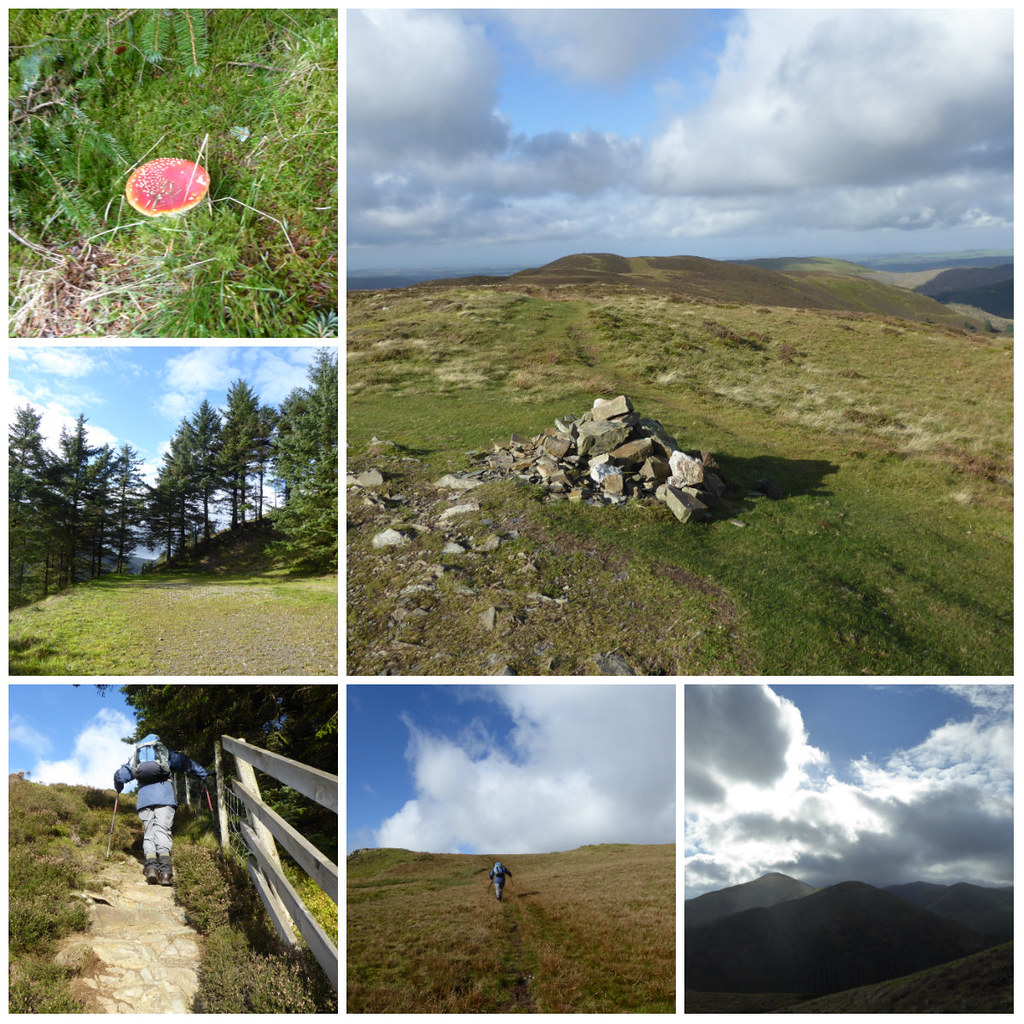 After the long walk of the day before, we decided that either we would have a rest day, or something really easy. Whinlatter fitted the latter specification. On a previous visit I had asked a returning walker which route he had taken, and he replied “Path to the left of the café, pass two squirrels and then turn sharp left.” 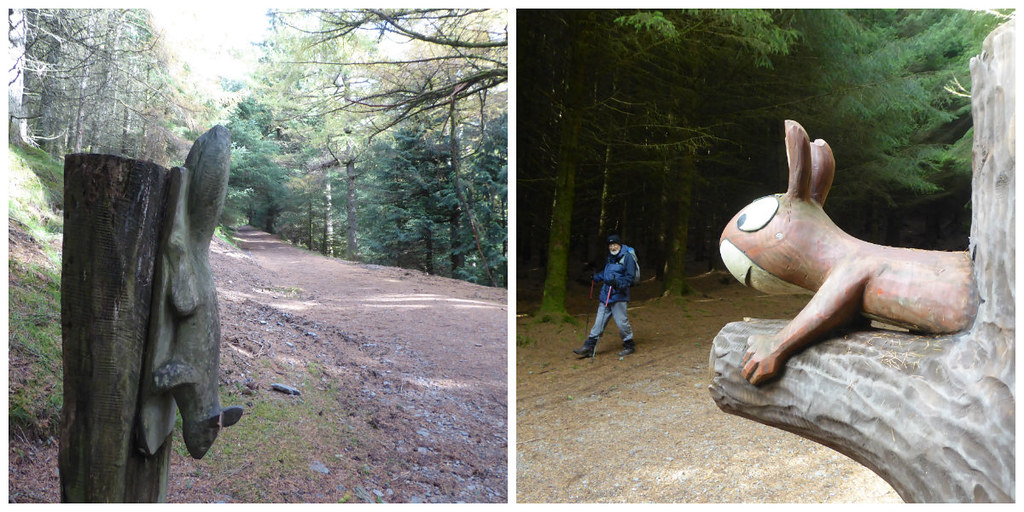 These turned out to be the squirrels, and the rest of the description made sense when we actually did it. Autumn fungus (1) Through the gate onto the open hillside (2) Up the fence and along the path (3 and 4) Summit (6) and Views (5)
We watched various people have hard and soft landings (much like Brexit) at the end of the zip wire, and hope the nation isn’t heading for the sort of landing we witnessed one elderly Dad make, after attempting to twizzle round on the wire once too often. Ouch.
We then left the car park without paying. It is easy to forget. You punch your car number into a machine at the start of your trip, and again when you leave. Luckily, when we returned to pay the next day, the camera hadn’t managed to take a photo of our number plate, so they let us off. When I asked if punching in the number for today’s stay would make it think we had been overnight, they decided it would be easier if they clocked us in as a visitor today, so we needn’t pay for that either. 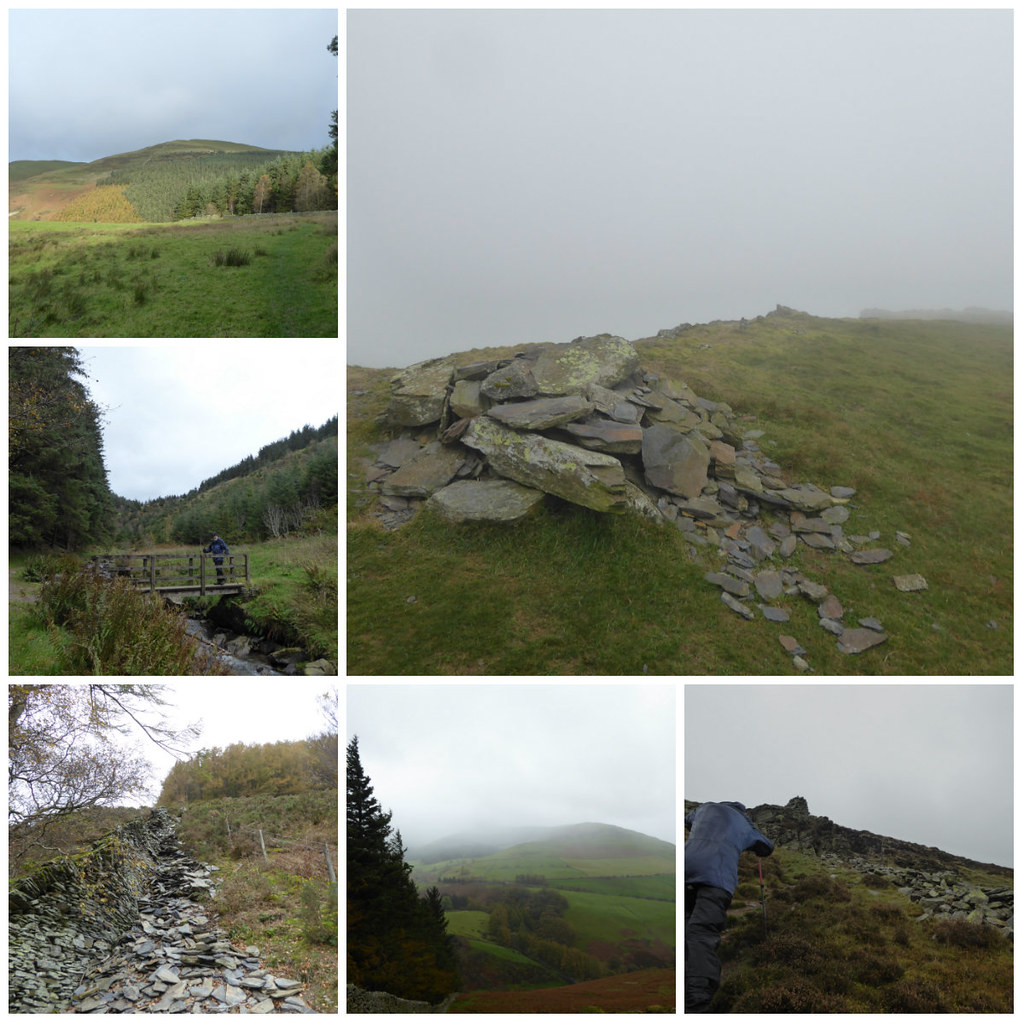 Rain was forecast from fairly early in the day, so we decided to climb another short hill. This was Graystones, and it was short because it was steep. We parked in the car park for Spout Force, and could see the hill from there (1) WE followed a small path downhill to a bridge(2) and then found what we took to be the start up the wall (3). It wasn’t, and had we read Wainwright more carefully, we would have realised we needed to go further along and then slant up to the wall. Looking back, we could see the rain was coming(4), but we were wearing our rain gear already. It was too much to hope that this was the top, it was merely an obstruction (5) We walked along the wall in the rain and clag until a path forked off to the right. This took us to the (possibly) true summit. Back to the wall and we reached the Wainwright summit (6).
On our descent, we spotted a path leading into the forest, and decided to avoid the steepest part of the descent as R’s legs were already quite painful, and walk round the much longer way. However, this lead us to the car park so there was no climbing back up the hill we had descended at the start.
Quite a reasonable bag, and although h R’s ankle has swollen up again, it isn’t as bad as at the end of our last venture to the Lakes. We already have plans for November.
I posted weather watcher pictures every day, but unlike our last trip to Borrowdale, the BBC Editors didn’t wasn’t any. 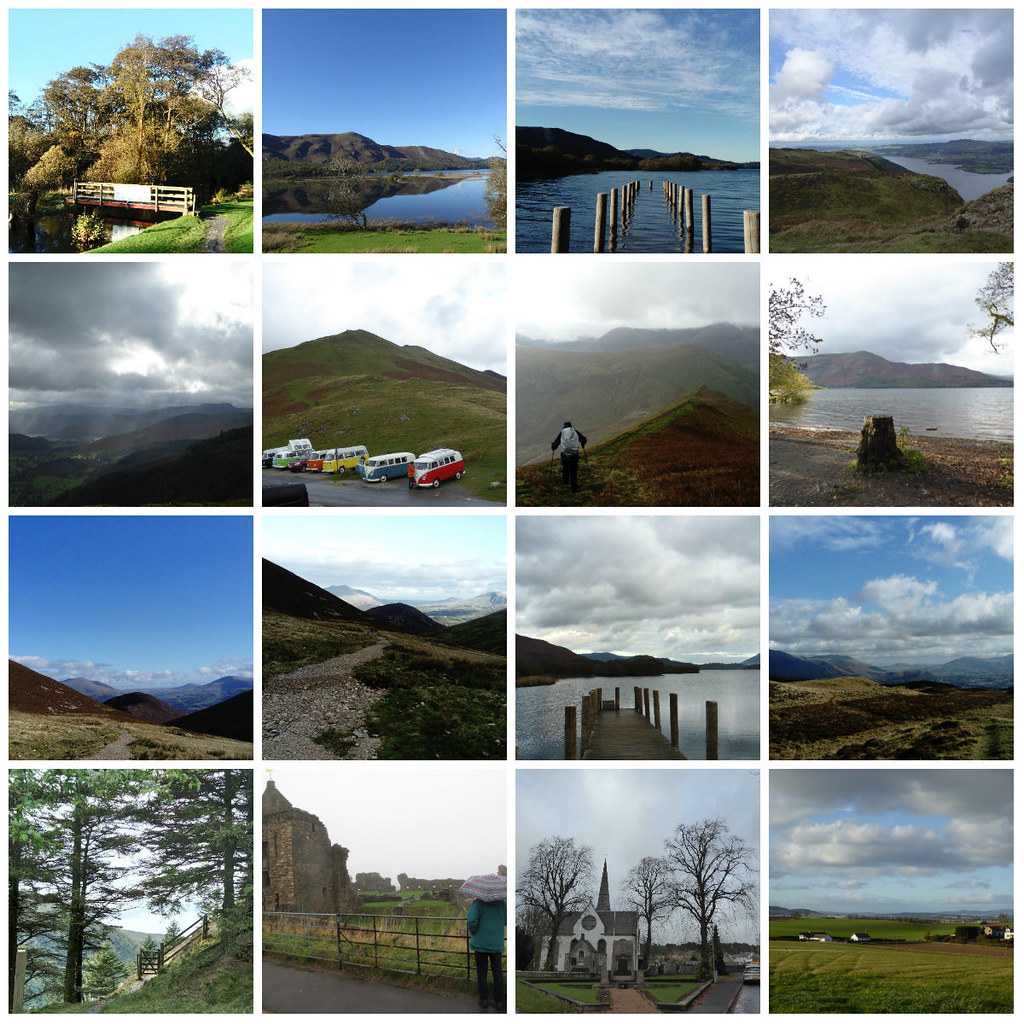 Nice photos, especially the Honister ones. The weather was indeed fantastic on the 14th and 15th (a day earlier there were 70 mph winds and rain). I walked from Keswick to Honister via the Newlands ridge, Robinson and Dale Head, then walked back the next day via High Spy. Will be heading back there this weekend where the forecast is for snow

Looks a fine trip persistent injuries notwithstanding, you certainly picked some very fine view points to make the most of the weather.