The walk started near the junctions of two lanes with the minor road that leaves the A494 north west at Cefn-ddwysarn. There's enough room for two or three cars to park sensibly fairly near to the lane to Pentre-tai-yn-y-cwm. It is marked by a broken slate bearing the word "Pentre".
The walk up the lane beside the stream is very pleasant and the woodland birds were abundant (Goldcrest, Nuthatch, a Woodcock). The path has been re-routed just before the farm, where you turn right up into a field. It is clearly marked and there is no need to go through the farm. The track to be taken is reached on the left over a stile just above and beyond a ruined cottage. Initially, the walk up the track is very pleasant and the woodland birds are quickly replaced by moorland birds (Stonechat, Raven, Buzzard, Skylarks and Meadow Pipits). 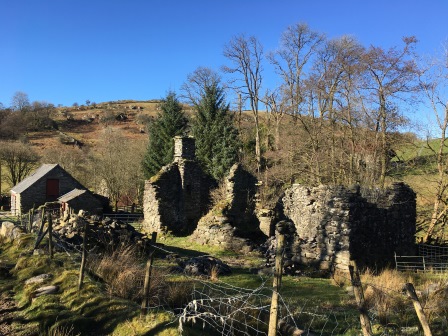 The ruined cottage by the farm 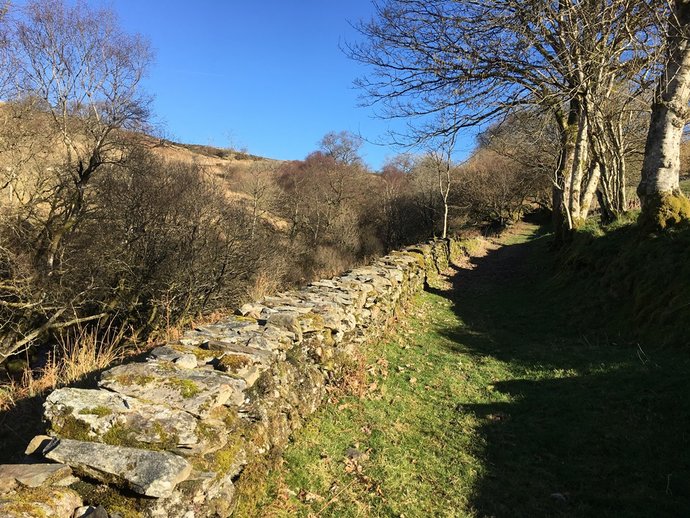 As the track started to get significantly wetter, I encountered a gate that was firmly secured, whilst a clear track started to wend its way up the hillside towards Moel Darren. On the spur of the moment I decided to follow this track to Moel Darren's summit and approach Foel Goch by way of the ridge that links the two. The path soon petered out, but the walking was pretty easy, dry, tussocky grass (although the hillside will have some bracken on it later in the year) and there were ample sheep tracks to ease the way still further. 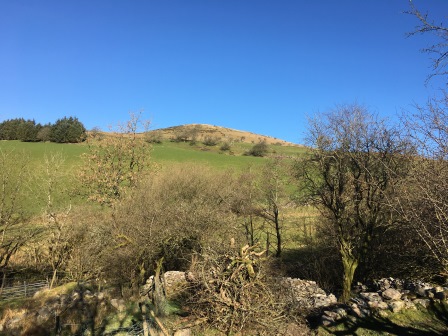 The views are extensive from both summits and the Carneddeau, Glyders and Tryfan (it's East Face buttresses clearly catching the sun), Snowdon, Moelwyns, Arans, Arrenigs and Berwyns could all be picked out. Superb!
I descended via the pass, marked with a boundary stone, however the track was much wetter and far less distinct than I'd expected. Frankly, I was glad I'd not trudged up it both ways. 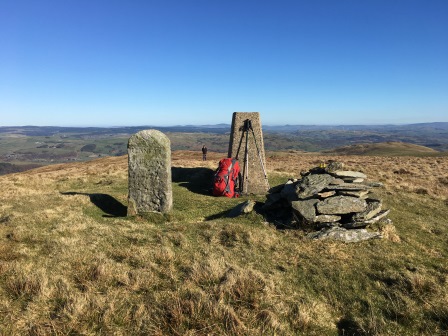 The route that I took was about 4.5 miles/7.5 Kms, and involved about 1250'/380m of ascent/descent. It took me just under three hours, but then I'm nearly 70 and wasn't in a hurry. It made for a very pleasant outing on a phenomenal February day, with clear skies, sunshine, great views and the temperature almost reaching 20 C.