As I am off on a backpacking trip around NW Scotland in June, the time has come to start getting my legs used to doing proper walks, as opposed to the four mile bimbles I normally do with one of my Meetup groups. I decided to do a double figure mileage walk involving a bit of up and down. It is impossible to properly train for a Scottish highland multi-day trek over multiple Munros living in the south of England, but you have to do what you can with what you have available.

I drove down to Findon Valley which is close to where I live, parking up a bit after 9:30am. Set off up the path straight up the hillside to gain the broad ridge which leads to Cissbury Ring. Weather was on the cool side but dry and sunny, and the ground was generally very dry. Once on the ridge the views were extensive, with a good view across Findon Valley and out across Worthing. View of Findon Valley and Worthing from Cissbury Ring.

From Cissbury Ring I headed for Chanctonbury Ring, which is on the north edge of the Downs. I didn't take the direct route but headed NE along the Monarch's way towards Steyning. Looking towards Chanctonbury Ring (circle of trees on horizon) from Cissbury Ring.

The Monarch's Way segment took me alongside a field full of cattle, then dipped down into a valley before rising up the hillside to another broad ridge where it meets the South Downs Way. The climbs so far were easy and I was making good progress on the hard surfaces. No complaining from my legs so far.

I turned towards the NW along the SDW and followed it to Chanctonbury Ring, which is a circle of trees near a local high point on the Downs (238m). I walked around the trees to the north to enjoy the views northward across the Low Weald to the Surrey hills in the distance, and the views east along the Downs towards Devils Dyke. Visibiliity was good and walking easy. View along the Downs ridge toward Devils Dyke. View NW across the Weald towards Surrey, the Surrey hills were visible but may not be in the photo.

From Chanctonbury Ring it was time to begin my descent. The South Downs Way heads down to the A24 where there is a small car park (surprisingly not full given the nice weather), and after crossing the A24 (not difficult) I continued on up the hill on the west side of the valley. It didn't take much height gain for the views to return , this time over Ashington and Storrington. As I reached the next local high spot at 208m, the path continues on to a building then switches back. I couldn't be bothered to walk to the building so looked on the map for a way to cut the corner. I thought a farm track would be suitable but it was one that was clearly denoted as not a right of way, so I continued on for a bit until I got past some woodland, then cut the corner across a grassy area to join the bridleway heading back towards Worthing.

This was a gentle descent with nice views west over farmland to nearby hills, and progress was good. I stopped for lunch at this point and that was when I notice just how chilly it was. Earlier in the walk I had to remove my sweater as I was building up a sweat, but as soon as I had lunch it had clouded over and I had cooled down, so I didn't hang around and set off at a brisk pace to warm up again. I felt temperatures were a bit poor for the south of England in mid April, but it seems to be a feature of Spring these days to take ages to warm up. I think the cool start to April has put the brakes on Spring a bit, as it was noticeable how bare the trees still were when looking across the landscape. 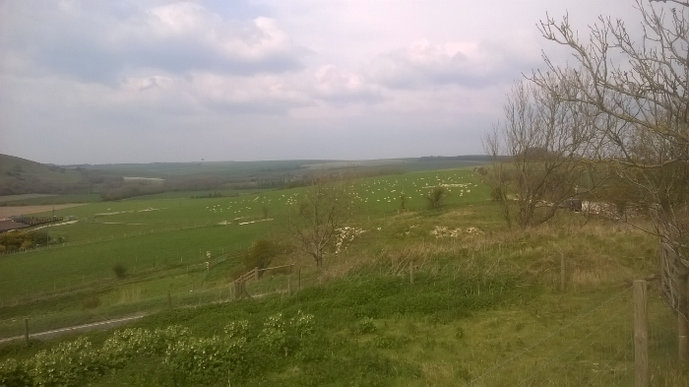 Looking back towards the NW.

It was a case of following this bridleway gently downhill which went on a while but eventually reached the A280 which I had to cross. Ahead of me was an intimidating looking hill (Church hill) which my route partially climbed and circumnavigated, but the climb was trivial, confirming my belief that when climbing hills in Britain, they always look worse from the bottom than they really are when you start hiking up them. Once I got around the hill the views opened out once again and I could look back across to Cissbury Ring and Findon Valley village where I had started. No problem with aching legs (I felt I had the strength and stamina to go round again) but the hard surfaces had taken a toll on my feet, which were sore (are there any ways of limiting foot soreness on a long walk?). View west from the way up and around Church hill looking over the A283, Clapham Wood on the hill on the left. Continued downhill and turned left at a crossroads, which brought me into High Salvington. One minor road to cross then walked along a long open grassy area. Turned left and followed an estate road to the A24, crossed the road and turned right then left into Findon Valley. It was now a case of a little bit more uphill then turn south at the edge of the village to get to the car park at around 14:10.

Lots of dog walkers and mountain bikers out today, but not as busy as expected given it was dry and mostly sunny. Maybe the cool temperatures put some people off. If I tried to do this walk on a warm sunny summer day the car parks I passed would be rammed full.

Sympathise! (I can see my house from your pic - kinda...)