One of the things about not driving is that it often forces more imaginative route planning. The Western Lake District is poorly served by public transport (there aren't any scheduled buses to Wastwater or Ennerdale) but thankfully Eskdale does have public transport of sorts; the Ravenglass and Eskdale Steam Railway, AKA the 'La'al Ratty' - a small gauge railway run by volunteers.

I got the regular train to Ravenglass and bought a 24hr ticket for the Ratty, allowing me to return the next day. Unfortunately I made the mistake of sitting in one of the open sided carriges, which was extremely cold, despite the train barely reaching my average running speed. Still, it ran exactly to schedule (a novelty when travelling by train), arriving at Dale Garth after 40 minutes. 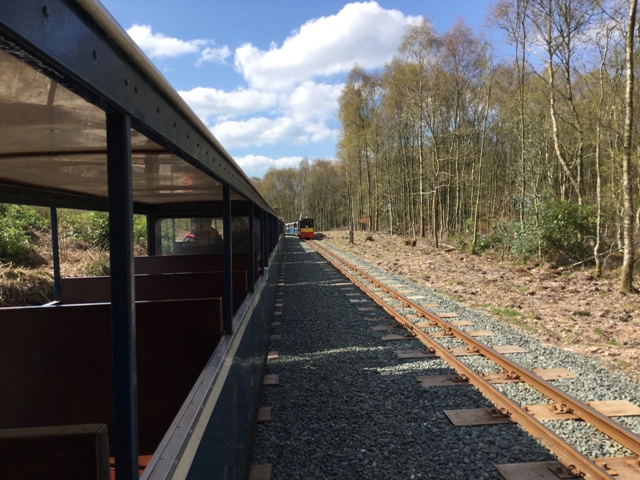 I set off first for Green Crag, via the tourist path to Gill Force. It was pretty busy, but after turning off the main track at Low Birken I was completely alone. Green Crag was fairly unremarkable except for the little scramble at the end. Would be pretty confusing in poor visibility though. 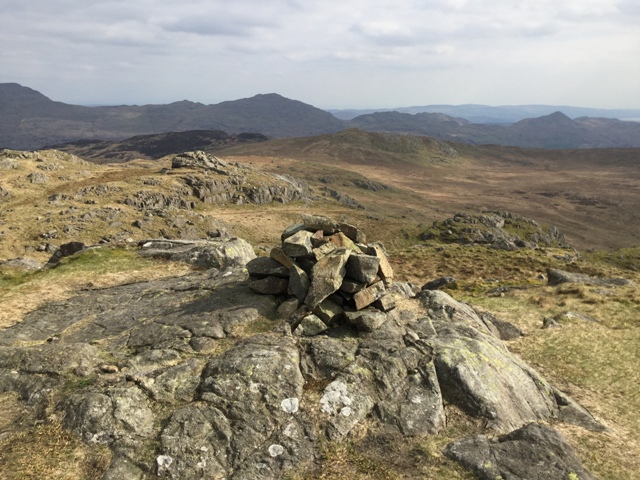 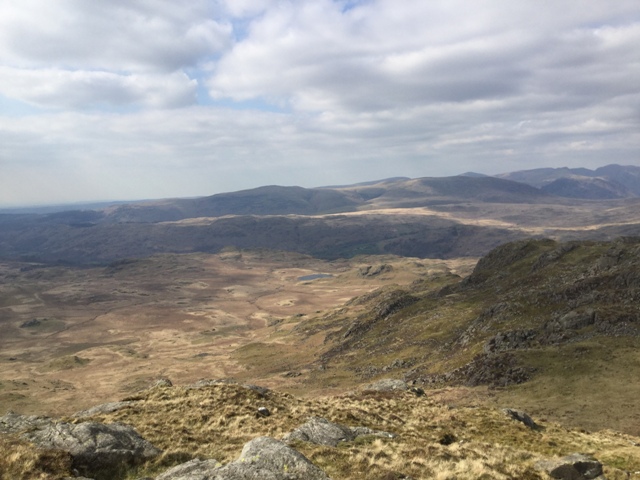 Going from Green Crag to Harter Fell involves crossing a large flat area at the head of Spothow Gill. There are no bog symbols marked on the OS map, alhough this seemed unlikely given how flat the area is. 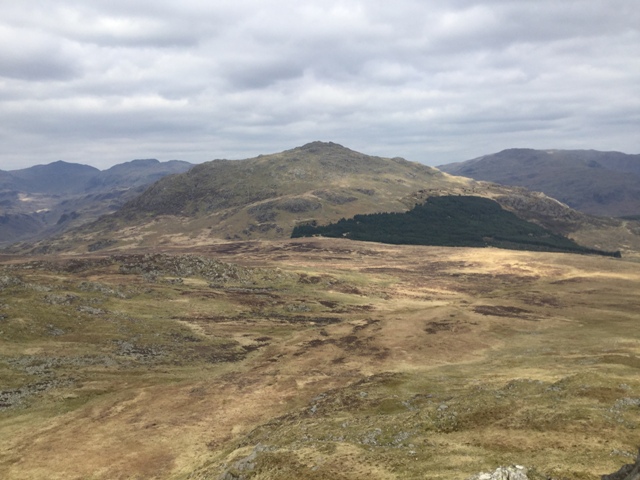 Indeed it was very boggy, though the recent dry weather made things a little easier. Not a route I would recommend, especially after rain. 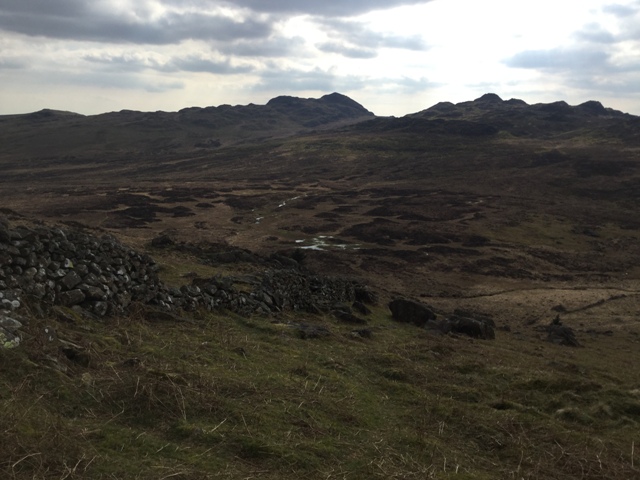 On to the rocky summit of Harter Fell: 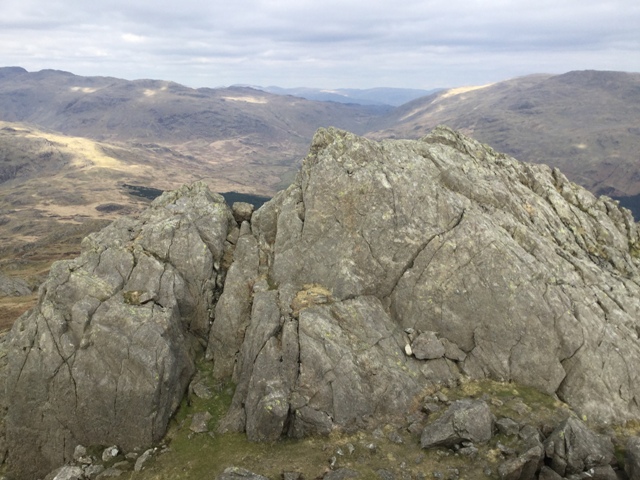 From the summit of Harter Fell I picked my way down through the crags, trying to head as directly as possible to the top of Hard Knott Pass, before climbing to Hard Knott summit. 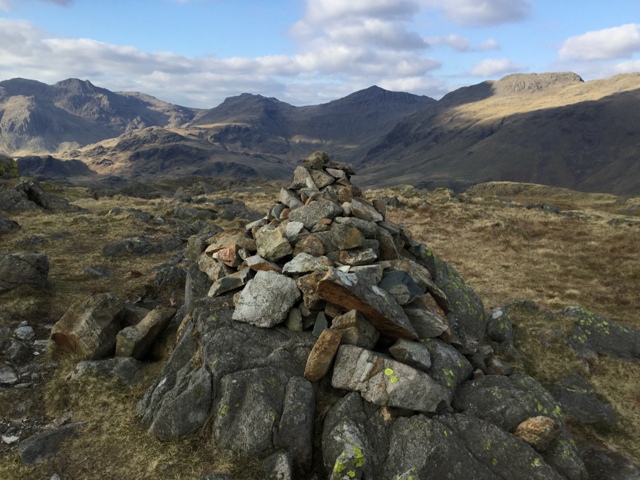 Looking back toward Harter Fell: 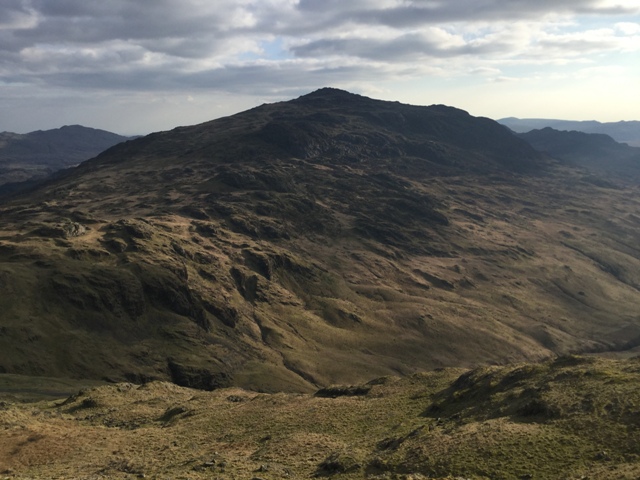 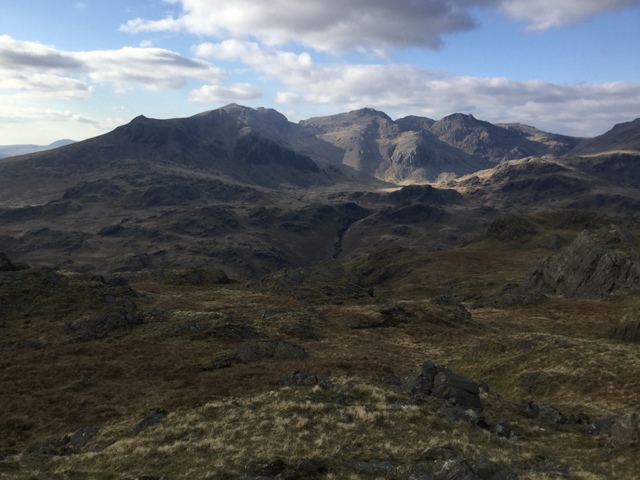 The easiest way down from Hard Knott would be to climb straight down to the River Esk, but I decided to take a detour to visit the Roman fort. The route down through the crags was steep but manageable. 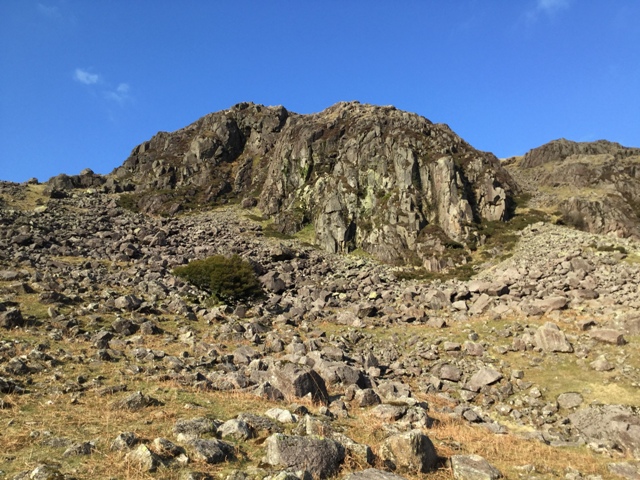 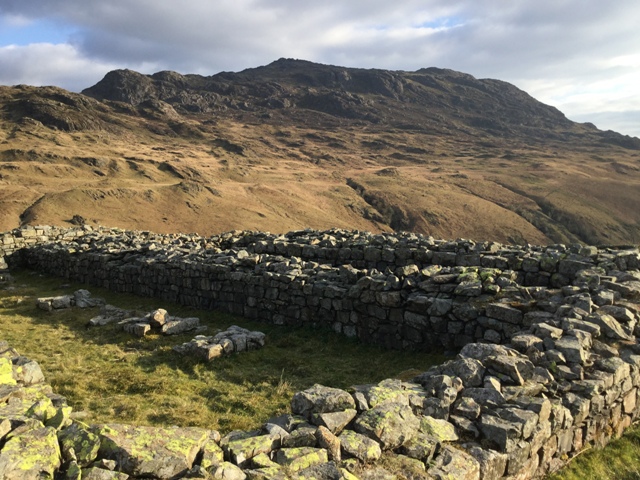 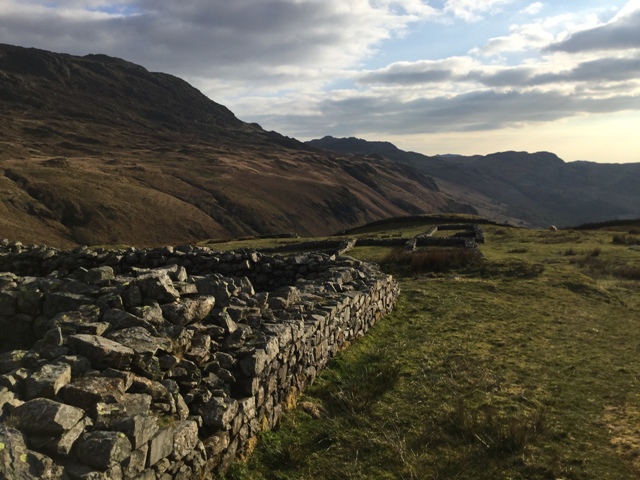 After a surpisingly quiet night in the Youth Hostel, I set off the next day for Slight Side, over another big boggy area: 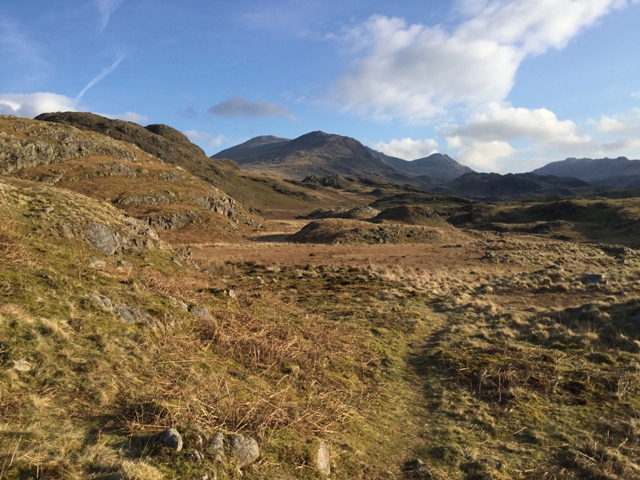 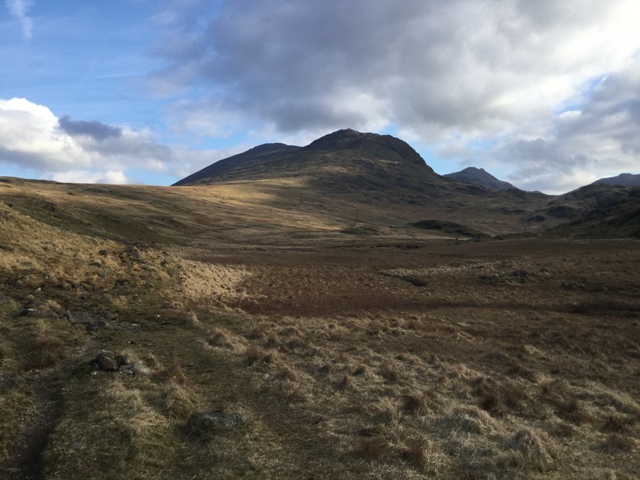 The summit of Slight Side was bitterly cold (this was the week before Easter). I did have vague thoughts of continuing up to the summit of Sca Fell, but it seemed pointless. I'd already climbed Sca Fell by it's most interesting walking route (the West Wall Traverse) over Christmas, so climbing it a second time via an inferior route would've been a waste of time. 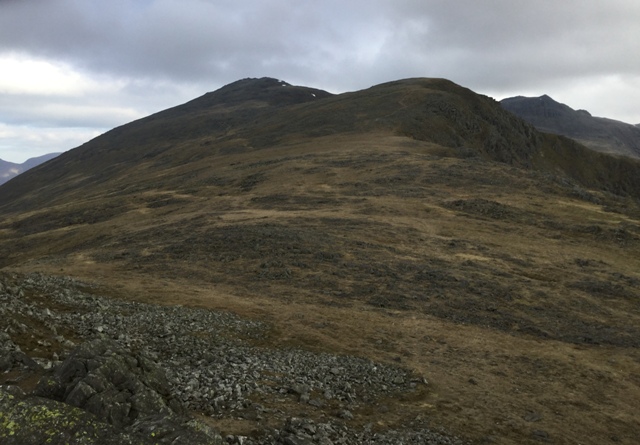 I followed a faint path that took a direct route from Slight Side down towards Boot, passing over a large boggy area (Quagrigg Moss) then passing Stony Tarn and "Peelplace Noddle" then "Little Pie". Clearly someone had fun naming all the features in this area 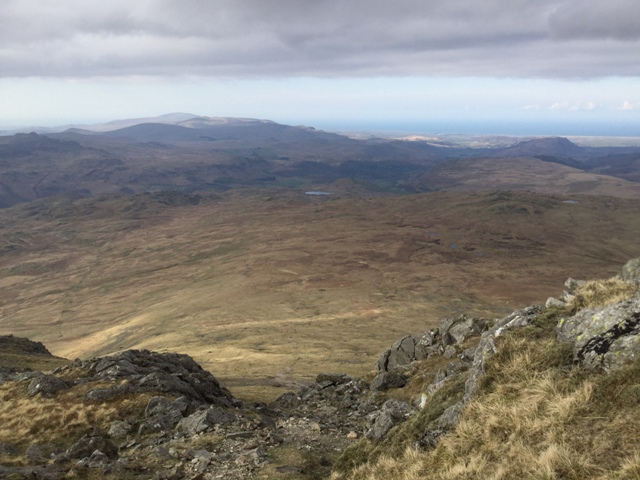 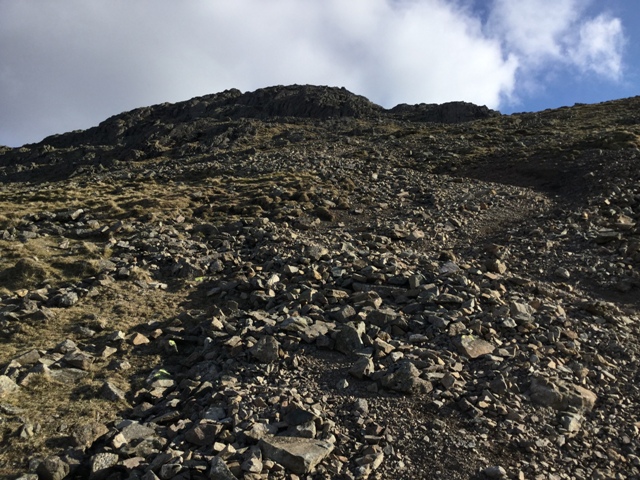 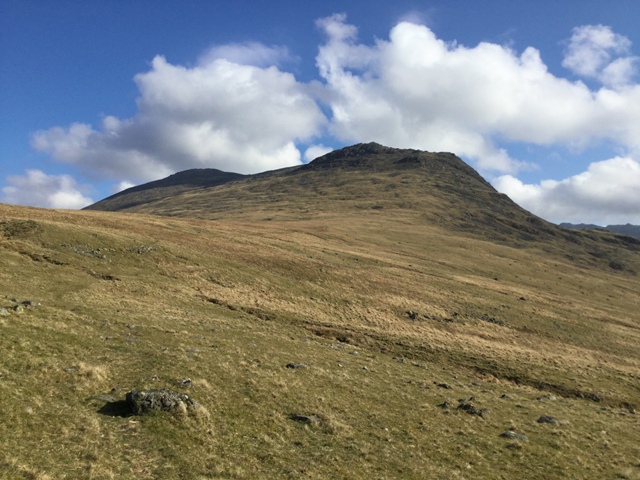 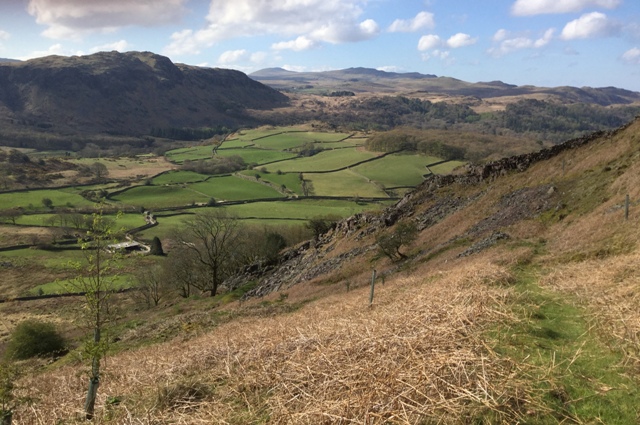 I got the timing of the second day all wrong, getting back to Dale Garth just after the first Ratty departed and needing to wait well over an hour for the next one. The Ratty guard spoke in a curious mix of Scottish and Cumbrian dialect, asking "whereabouts-are-ye-gaan?'. Growing up in both Lakeland and Aberdeen I understood him perfectly, but I could just imagine the look of confusion on the face of foreign tourists