A good forecast encouraged me south to one of the three Donald tops I had still to collect. It is the most easterly Donald and the only one that is not a summit of any kind. It is the highest point on the Scotland/England border - the West Top of Cairn Hill. When I'd been there climbing Windy Gyle the cloud was hiding The Cheviot and getting lower so I'd left it for another day and that day had arrived. A 06:40 start to miss the worst of rush hour on the Edinburgh bypass found me parking in the Harthope valley two hours later. The single track road up the valley is not well-endowed with parking places so early action is desirable as soon as you see an oncoming vehicle. There were already two cars parked by the sheepfold so I parked on the large area to the SE of the track and was joined by another car with solo walker as I was about set off.

After a chat replete with warnings about the peat bogs on my intended route I set off. I soon learned that the paths as shown on both the 1:25,000 OS map from WH and the 1:50,000 OS map on my Garmin were out of date. The track up the Cheviot heads through the first and only gap in the trees on the right and not through a non-existent second. Apart from that it was a untroubled walk in bright sunshine and a cool breeze all the way to the flagstoned path to the summit. Hedgehope Hill over which I intended to return. Looking back at the Harthope Valley. My start point is just beyond the forestry spanning the valley. 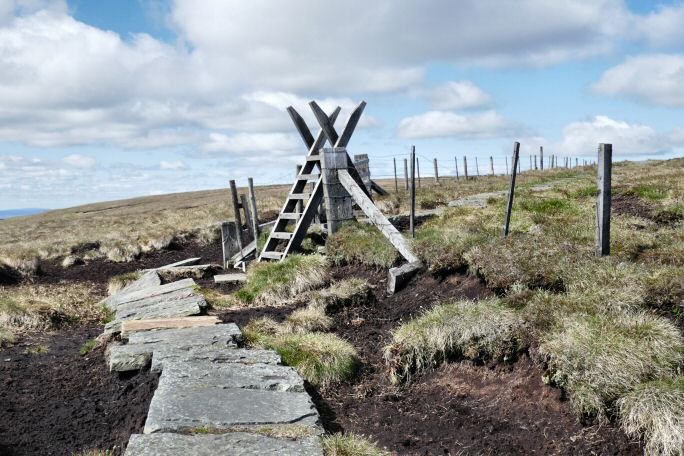 The start of the flagstones with 550m to go to the trig point. Some of the flagstones have moved - I wonder how much work it takes to keep them all in order?

There were a few pheasants strutting on and near the track, many bees scouting for nectar at low level, and a solitary walker coming down as I neared the elevated trig point. The distinctive trig point on The Cheviot.

The Cheviot and some of the other English summits I was visiting used to be in Donald's list. They are in my 1969 and 1984 editions of Munro' Tables, but had disappeared and been replaced by just the West Top of Cairn Hill before the 1997 edition appeared. Cairn Hill summit with Scotsman's Cairn in the distance. Beyond the trig point the flagstones continued almost unbroken to the top of Cairn Hill and Scotsman's Cairn where I stopped for a snack, a drink of water and to put on my jacket after two hours walking. Shortly after setting off for the West Top I was surprised by a couple of fell-runners who overtook me and soon vanished into the distance. It didn't take long to reach the claimed location of the West Top (NT 89572 19300 743m) also called Hangingstone Hill and about 50m from the path. I walked around that location which is about 40m west of the OS 743m spot height on my Garmin's 1:50,000 OS map, though it does correspond with the spot height's location on the 1:25,000 map. I think I'm therefore safe in assuming that I accomplished my primary goal of the day. I retraced my steps for a few metres to a gate and continued along more flagstones to Auchope Cairn (another former Donald) before returning to Scotsman's Cairn. There I chatted to another couple of walkers before I headed steeply downhill for almost 200m. About three-quarters of the way down, the main path swung left to continue beside the Harthope Burn while I turned right to meet the start of the peat hags. They would add spice to the next four kilometres as I started on my way up Comb Fell. It had been fairly dry for some time so the ground was probably firmer than usual. I certainly found no peaty morasses that couldn't be quickly solved by short diversions, and I didn't need to indulge in clambering along the fence as described in another WH report. On the way up Comb Fell

Further on some watery looking patches were bridged by lengths of road crash barrier which did inspire more confidence than the old fence posts lying over other pools. The summit of Comb Fell (another ex-Donald) is not obvious. I afterwards read that it is a turning post in the fence at NT 92414 18732. At the time I visited several pieces of timber either stuck in the ground or lying on it without coming to a conclusion. Looking the record of my track later confirmed that I crossed the fence at that turning post, so another tick in my 1969 issue of Munro's Tables!! From there the path drops almost 100m. Some of the eroded path has been overlaid with perforated plastic to assist regeneration of the vegetation. That appears to have worked, but be warned that bare patches of the plastic can be very slippery. The following climb of 150m arrives at the trig point and surrounding cairn atop Hedgehope Hill. My last summit and ex-Donald of the day. Comb Fell, Cairn HIll and The Cheviot from Hedgehope Hill.

After taking a few photos I started down thinking to follow one of the two paths shown on the 1:25,000 map, but despite a bit of zig-zagging they weren't there. I did eventually see the now single path which runs further to the east and followed it over Long Crags and up to Housey Crags. There the map led me to expect it to descend under the crags, but instead the main route continued behind them to a junction where a left turn took me in the expected downhill direction and soon joined a good track. I followed this for a while expecting an obvious right turn to head for a possible footbridge over the Harhope Burn, but didn't see one and ended up walking an extra kilometre and using the road bridge at Langleeford. A post-walk review of Google Map's aerial view shows the path leaving the track to Langleeford 40m after I joined it and not the 170m I might have expected from the OS maps.

It had been a fine day for a great walk with the only issue being the out-of-date tracks shown on OS maps. I should have studied the aerial view more carefully in advance! For the benefit of others I've taken the 1:25,000 OS map and indicated which routes are no longer there and where the paths are now.