our_route.gpx Open full screen  NB: Walkhighlands is not responsible for the accuracy of gpx files in users posts
I’d been looking forward to this walk for some time now, having seen so many fantastic photos of the escarpment overlooking the blue waters of the lakes below it was now my chance to stand on the top of these superb fans and take in the beauty of the place.

Having parked at the Llyn y Fan Fach car park at the end of the track past the tiny hamlet of Llanddeusant. I was pleased to see the pre-arranged blue skies had also turned up, always good seeing blue skies reflected in the water. On getting out of the car the high top of Picws Du could be seen peeking over the shoulders of the nearby lesser hillsides waiting eagerly to welcome the morning’s visitors. So without further ado, I headed off… in the opposite direction! Crossing the stream by the car park and heading west up the track. 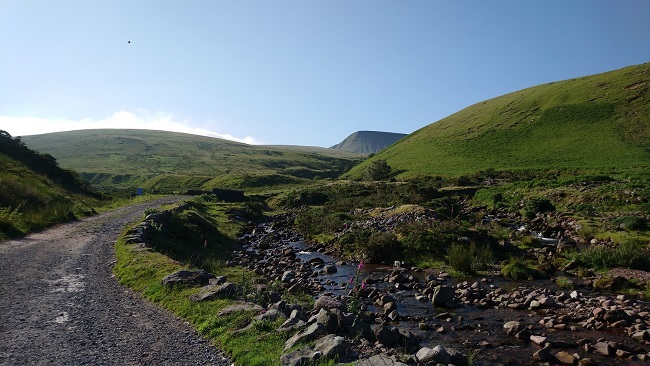 Picws Du from the car park I planned to head up the hill side to the first peak of Waun Lefrith. After less than ½ a mile the path swings left and heads south. Not a steep climb by any stretch of the imagination and in just over an hour and a smidgen less than 2 miles after leaving the car I am at the top of Waun Lefrith. A small cairn marks the spot and gives good views to the west of yesterday’s visit to the pair of giant monster cairns of Garreg Las, good views they are however they’re firmly put in their place by the view east. Fifteen yards from the cairn is the edge of the escarpment. Standing on the edge the view is breath-taking, the summit here is 2221ft and the llyn below my feet is about 600ft underneath the air beneath my toes. The wind is doing its best to keep me up on the top, if it were blowing from the west I don’t think I’d be standing so close to the edge. The water below is full of white horses and I certainly wouldn’t have been surprised to see windsurfers skating across the not so smooth surface.

A tiny pond with the escarpment beyond

Cairn at Waun Lefrith with Garreg Las out to the west The path heads anti-clockwise following the edge of the escarpment quite closely, there are a few points here and there which seem to have the remnants of a scree path down to the lakeside, a brave man indeed that attempts it… or fool! If ascending these routes, and I’m sure some people do, then be prepared, these are the type of routes that would involve one step up and perhaps three sliding back down again. 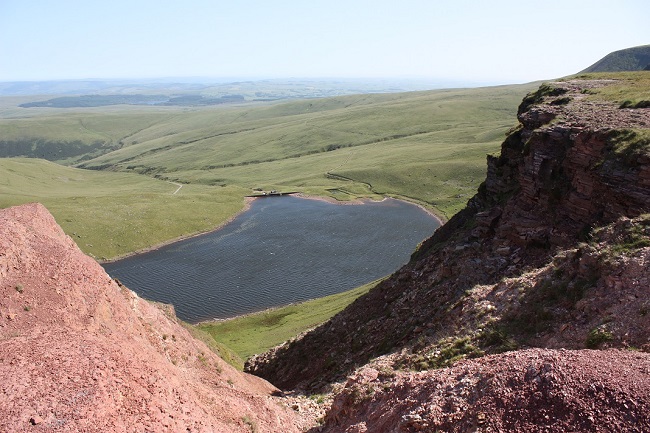 An alternative route up?

Safely on the top of the hill there are fantastic views all the way around the bowl. The progress is slow, although the path is good and only a slight incline, anyone with eyes will be seriously impeded by the majesty of the views, every few steps present a vista where the camera cries out to be used. Height is slowly gained on the way up to the first Hewitt of the day of Picws Du or Bannau Sir Gaer as I understand it’s more formally known. The wind now is raging and I steer a route at least 3 yards south of the obvious path away from the cliff edge as the wind is so strong and I don’t want to be blown to the bottom of the cliff before completing the rest of the route. At the top there is a cairn right on the edge of the escarpment at 2458ft, I’m not brave enough to sit on top of it as I’m sure the gale would throw me clean off the edge. Just to take the obligatory photo of the cairn I have to lay on the ground to hold the camera still. The sun is still blazing away but the hurricane keeping me pinned to the ground still howls. This is a fantastic spot to sit around for a while and watch the world go by, however, I don’t think there’ll be many people having a picnic here today. So it’s off the top I head, east towards a col and a junction of paths. At the col there is final sanctuary from the wind. There is an interesting path that snakes down from here eventually joining up with the lower path which would be my return route. Perhaps on a return visit this would be a path to try out. After recovering from the blasting of the wind it’s time to head on up the path which now climbs again towards the next peak of Fan Foel. It’s a steady climb but not too strenuous even for these old bones. At the top at 2562ft there is a curious arrangement of stones, a couple in the centre sticking up out of the grassy top surrounded by a circle of stones, another one for the mind to ponder, more ancient worshiping and parading on a summer solstice perhaps? 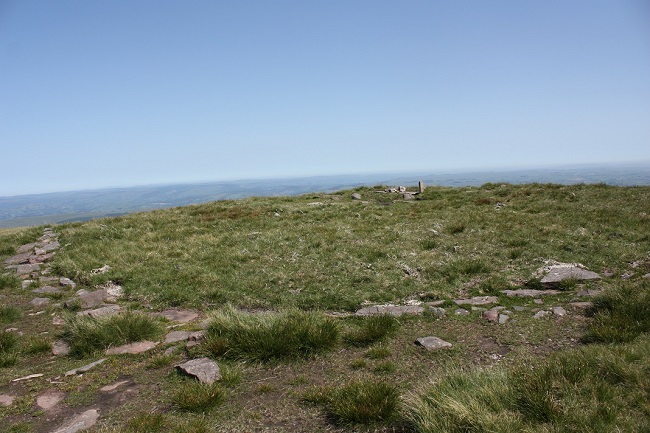 The path now makes an about turn and heads south now clinging to the eastern edge of the escarpment. Another gentle rise and a short distance later and I’m at Fan Brycheiniog which has two summits, this first summit of Twy y Fan Foel is little more than a pile of stones but is apparently the higher of the two by some 3ft and a topping out height of 2633ft making it the second Hewitt of the day. Great views down over Llyn y Fan Fawr and beyond to the Pen y Fan massif. Continuing along the path for another 300 yards brings me to the second summit of Fan Brycheiniog simply known as ‘The Trig Point’, imaginatively named after the trig point I guess! Again great views in all directions from the summit of 2630ft. Although a little higher than the wind blasted Picws Du, the wind here is little more than a stiff breeze, there is a substantial wind shelter here which I imagine gets a fair bit of use, could have done with one of those earlier! 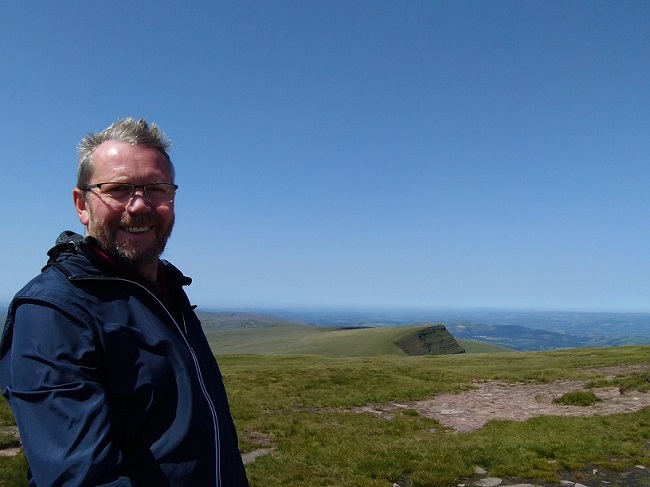 Yours truly at Fan Brycheiniog Heading off the hill, the path heads down to a col before heading up again along the edge of the escarpment to the last hill of the day of Fan Hir. No obvious summit to be found, some stones and rocks in the grass but nothing to formally mark the summit of the day’s third Hewitt at 2493ft. There are a couple of high points to choose from and once on top of those it always seems that the next one, or the last one is higher! Now it’s time for the decent, turning around and re-tracing my steps north for ¼ of a mile back to the col and take the path right, down towards the lake, a little steep in places but not too difficult. At the Southern end of the lake I follow a path heading north keeping the lake to my left. This is a beautiful place, the temptation to stop is far too strong to resist, so it’s time to down pack, have a bite to eat and put my feet up for a while. Picture the scene, sun blazing, wind now a gentle breeze over the blue waters in front of me backed by the 600ft bluff wall of Fan Brycheiniog, not a soul to be seen and the silence is deafening, Shangri-la!! 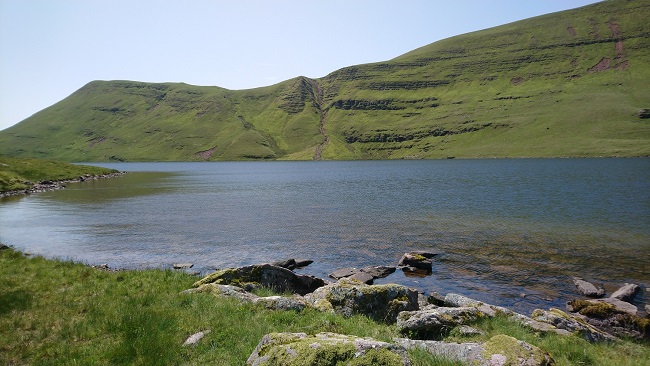 Lunch now devoured, the path back to the car now lay ahead, about 4 miles of easy walking awaits, once past the lake the path heads over a few humps and bumps and bears slightly left. It also becomes a little less obvious. Approaching the lower shoulder of Fan Foel I can see a more distinct path a little higher up and its clear that’s the one I should be on, so it’s a quick re-route onto this more obvious path which initially takes a south and south – east heading before turning west. This path heads all the way back to Llyn y Fan Fach and by and large is level walking and with the exception of the wonderful scenery is fairly uneventful. Once back at Llyn y Fan Fach another opportunity is taken to sit by the lake admiring the towering cliffs looming overhead and tracing the route taken some hours earlier. The last leg of the walk is the final mile back to the car park down a solid track.

Looking up at the route taken

Looking up at the route taken

There are so many beautiful walks in this country, so many that I rarely do the same walk twice, however this is one that does merit a return visit. When venturing out on this walk ensure you book good weather, it would be a shame to do this walk in the clouds and miss out on the stunning views.

Fantastic stuff indeed Davey. Spent a lot of time in there in our younger days.