Alphubel is the 22nd highest major peak in the Alps and the 12th highest summit with over 300 m of height isolation. The sadly departed Martin Moran described Alphubel as resembling an upturned pudding bowl due to its flat top (in contrast to every other peak in the area). Still, it's a huge mountain with a number of good routes, some of which can be done as a day trip from a valley base with no need for a hut stay.

Alphubel as seen from the summit of the Mettelhorn in 2017: 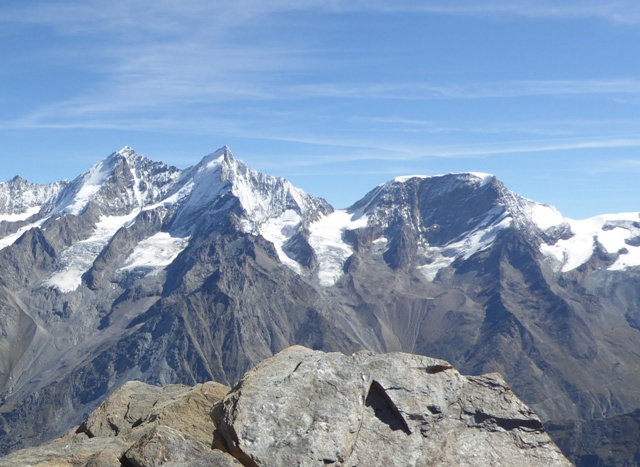 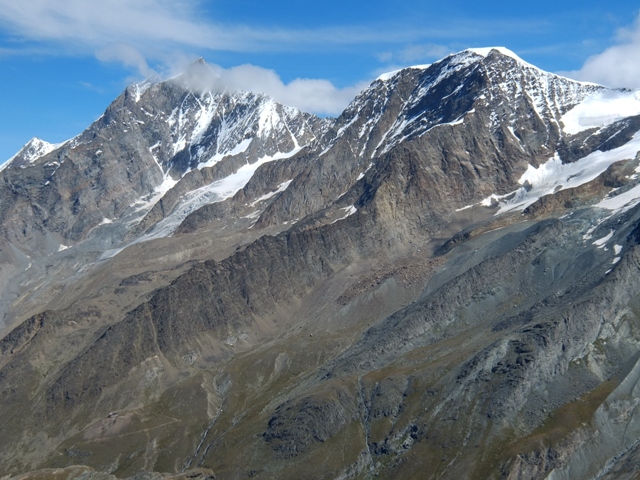 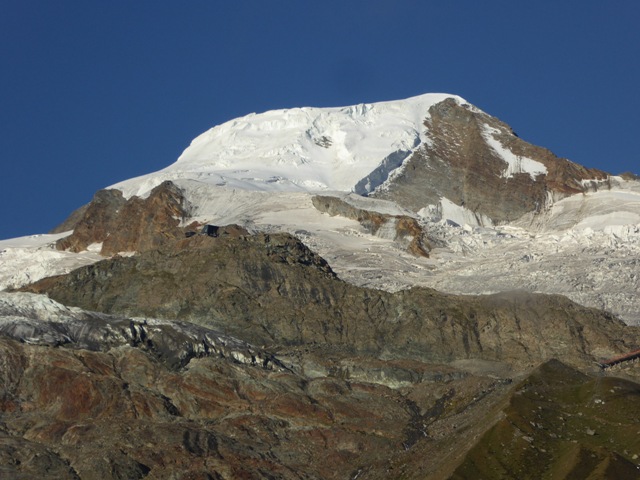 Alphubel is extremely crevassed, meaning climbing it solo was not a sensible option and I needed to hire a guide. I joined up with one other client, Hildegard, to make a team of three. Our guide was Thomas, who with his furry fleece, flat cap, moustache and rope over his shoulders looked like a cross between the classic Swiss bergfuhrer and Don Whillans. Neither was a bad thing!

There are two standard routes up Alphubel from Saas Fee. One is a pure snow/ice route going up the East face from Langflue. The other is a mixed snow/rock route which starts from Mittelallalin and climbs a peak called Feechopf before climbing Alphubel via the SE ridge. Our route was a combination of these two; we climbed over Feechopf then joined the Langflue route for the final ascent to the summit.

After taking the cable car from Saas Fee to Felskinn and then the underground railway to Mittelallalin, the route leads across the ski area to the lower slopes of Allalinhorn. We were joined by literally hundreds of Olympic skiers training on the remaining snow. High levels of seriousness were on display 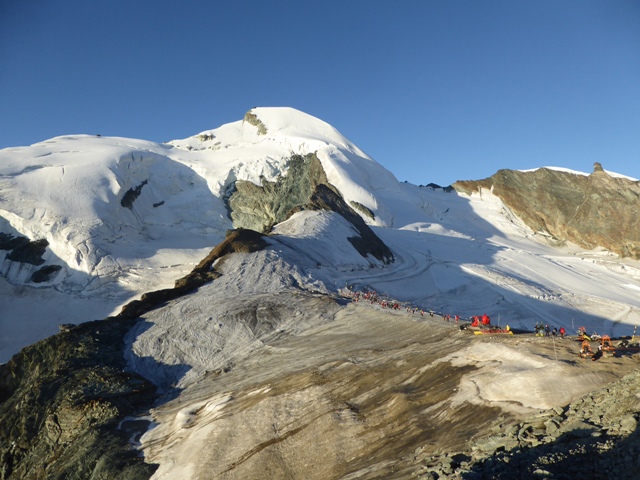 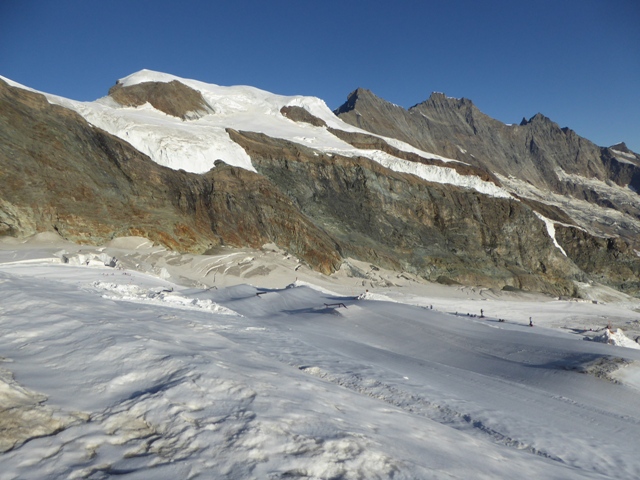 We followed the Allalinhorn route almost to the Feejoch before branching off to the right. 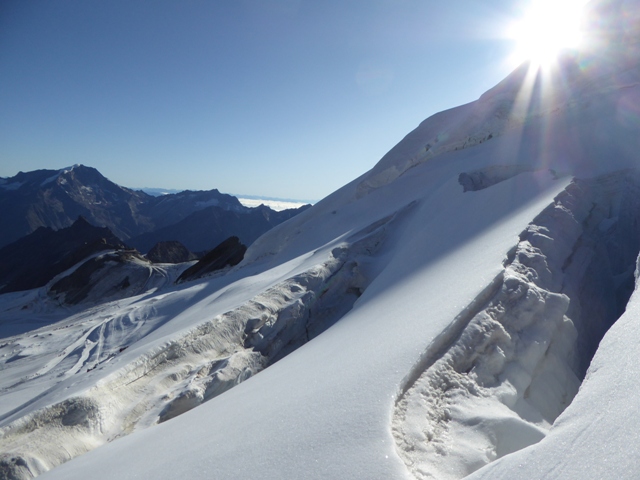 Huge crevasses on the Allalinhorn 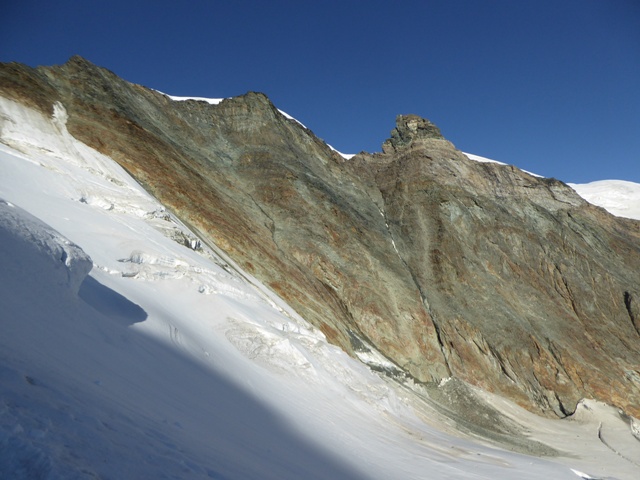 There was an awkward section, just after the point where route splitted off, in which Thomas needed to place a ice screw. Otherwise the going was easy. Up until now, I had little idea how we would get to the summit of Feechopf. As we approached the Feejoch, we had a clear view of the ridge leading NE: 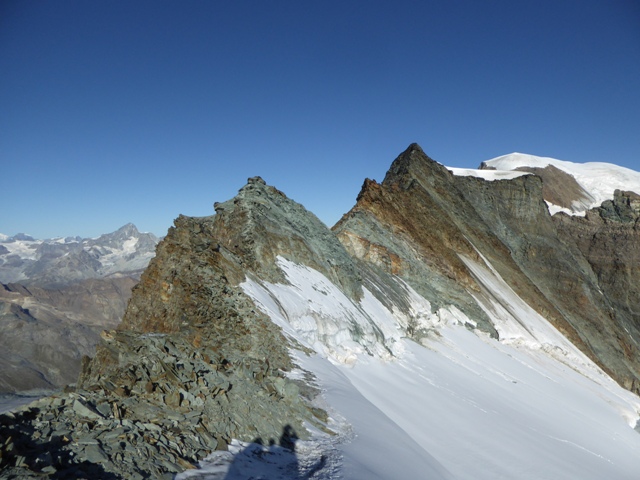 We needed to climb over the ridge, more or less right over the crest, with a couple of sections where it was easier to go slightly to one side. Richard Goedeker's guidebook rates the Feechopf climb as UIAA grade II. Thomas descibed the route as being an 'easy climb'. I remarked that it didn't look easy. He reassured me that it was easier than it looked. Thankfully, he was right. Indeed, the ridge traverse involved a series of excellent, handholds and footholds. Despite appearances, the rock was remarkably stable all the way. 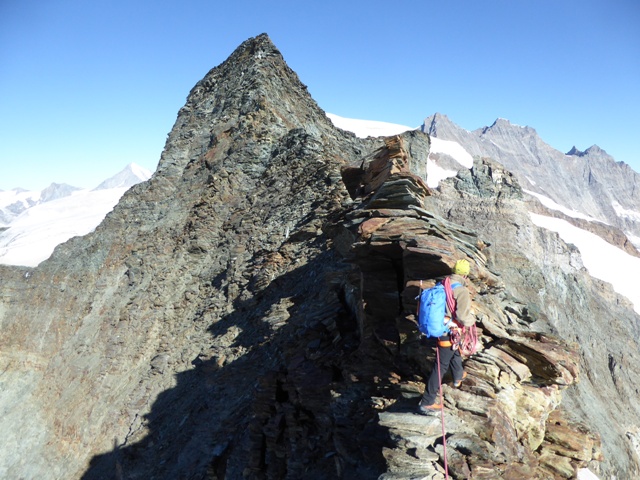 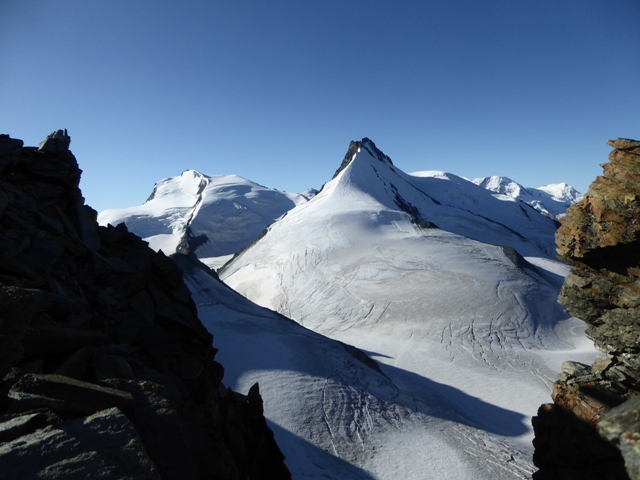 The final tower of the Feechopf ridge: 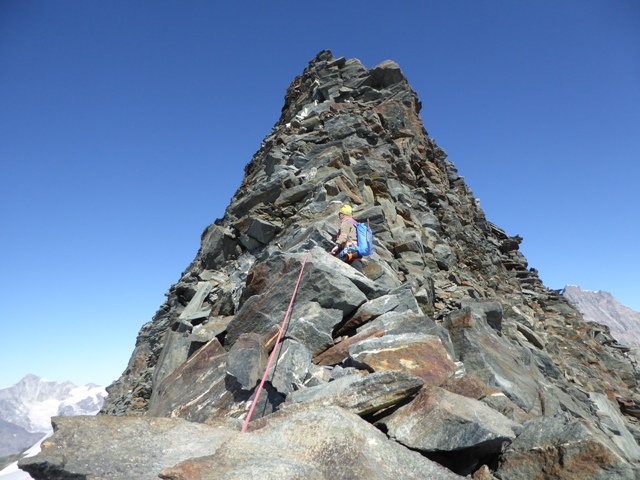 Once this was climbed, the route led over a fairly flat but highly exposed section up to the summit of Feechopf (3888 m). From here, the vertigo inducing rock climbing was over and the way to Alphubel was entirely on snow and ice. Normally, people climbing Alphubel from the Feechopf side go along the obvious SE ridge, which leads over a rock band before climbing the 'Eisnase' (ice nose). Unfortunately, the Eisnase was out of condition and we needed to take the alternative route around the cliffs and seracs on the East face and join the standard route up from Langflue. 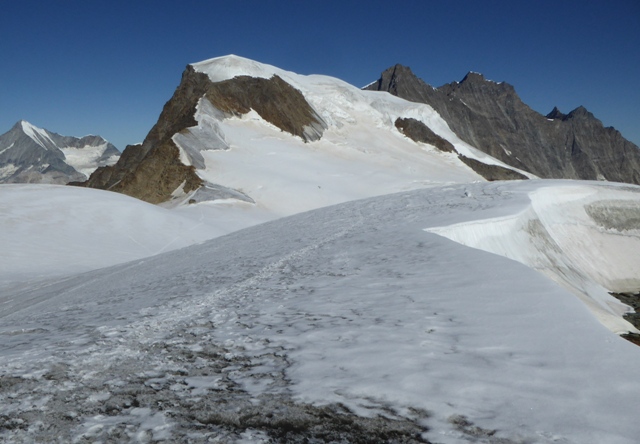 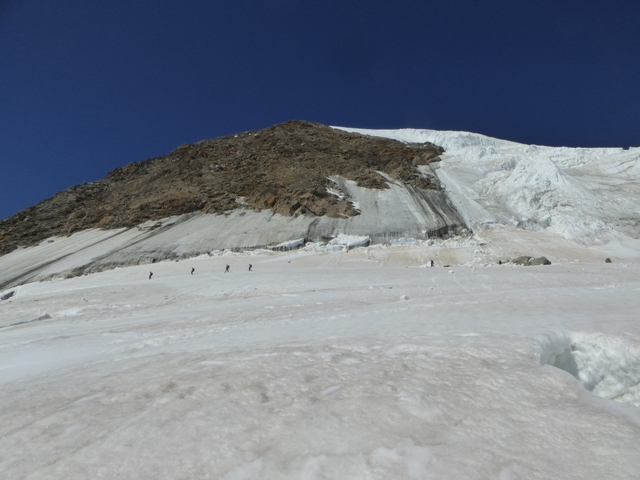 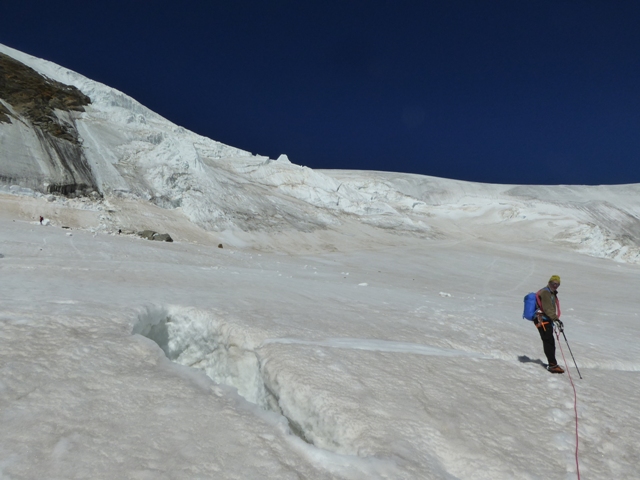 The ascent was a pretty tiring plod up snow slopes. I'm not conviced that climbing the Spechhorn (3189 m) the previous day was sufficient for acclimatisation purposes, but the altitude wasn't too bad. 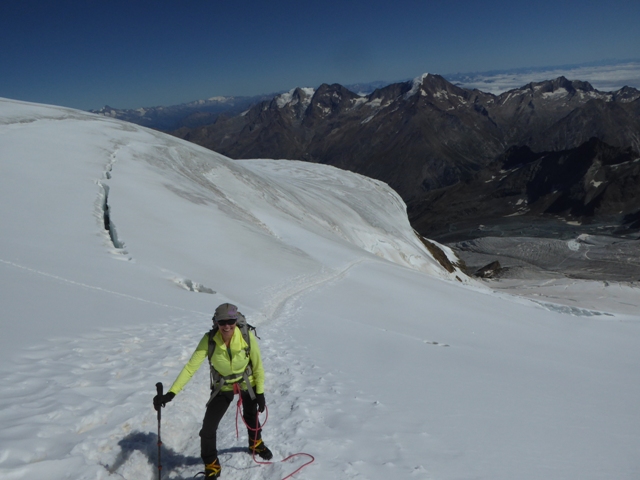 The summit was a huge plateau, larger than a football pitch: 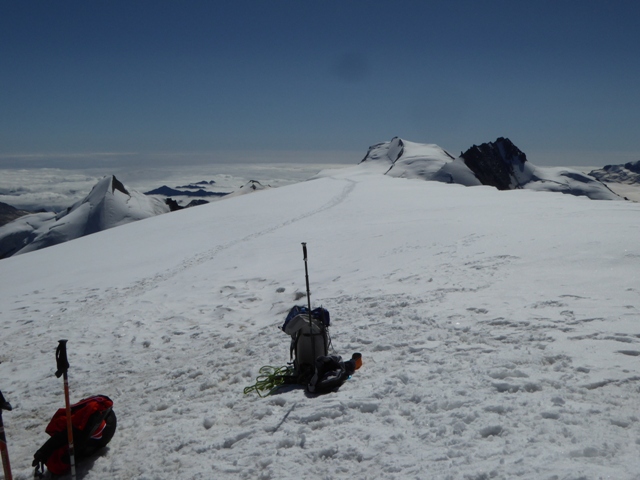 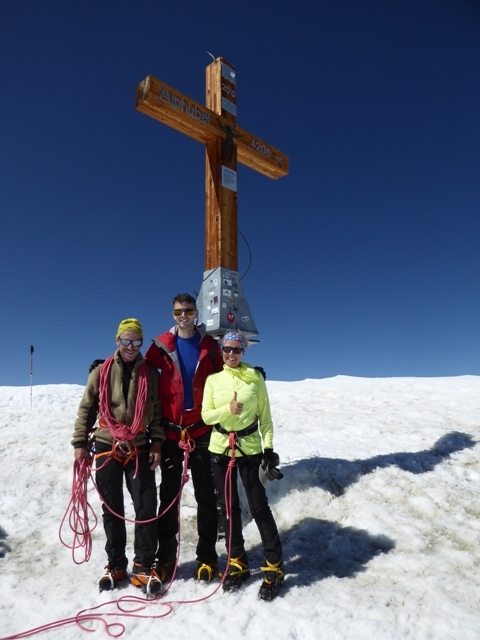 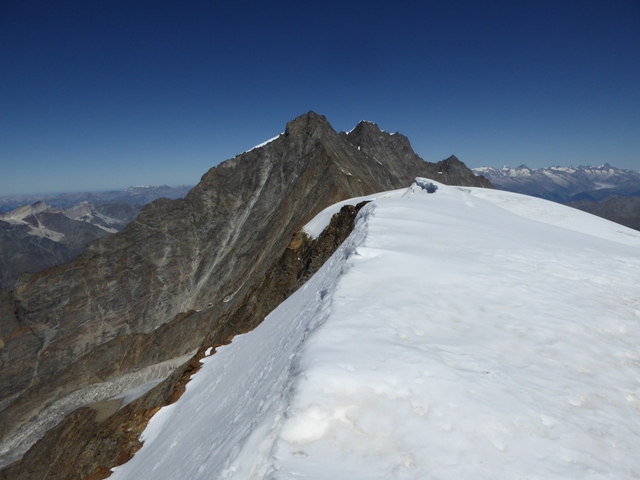 The summit is not corniced, so you can walk right up to the top of the snow crest 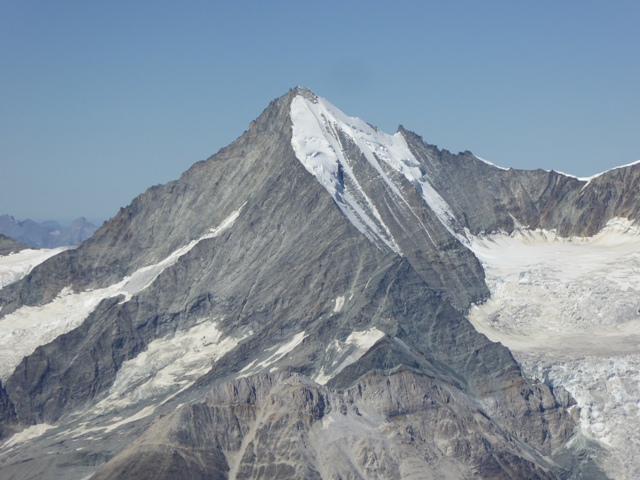 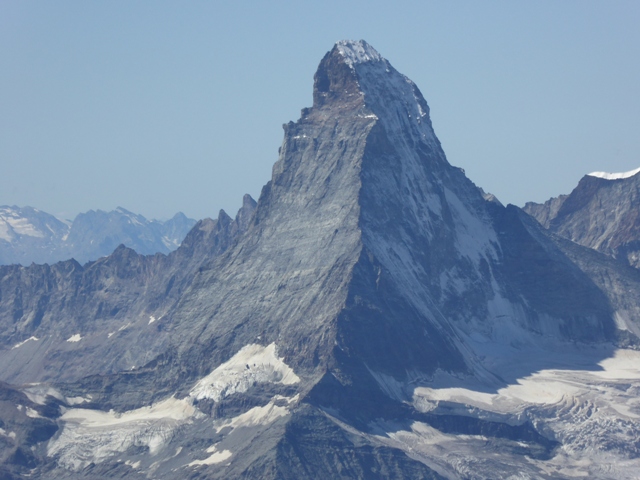 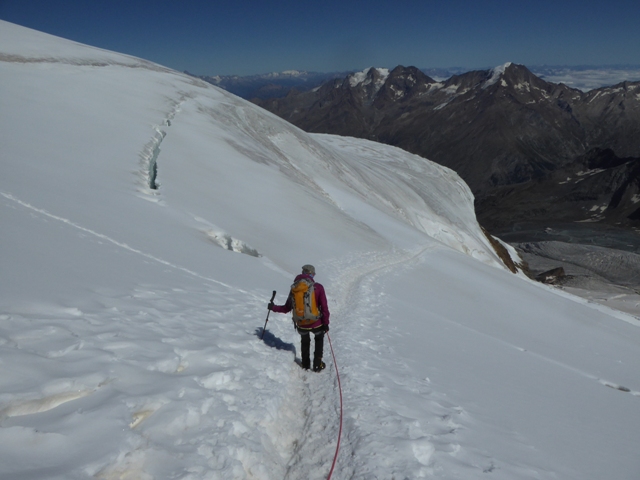 The fun and games were not over yet. About halfway down the descent, the glacier become increasingly crevassed. At this time of the year (early September) the snow bridges were worryingly thin. 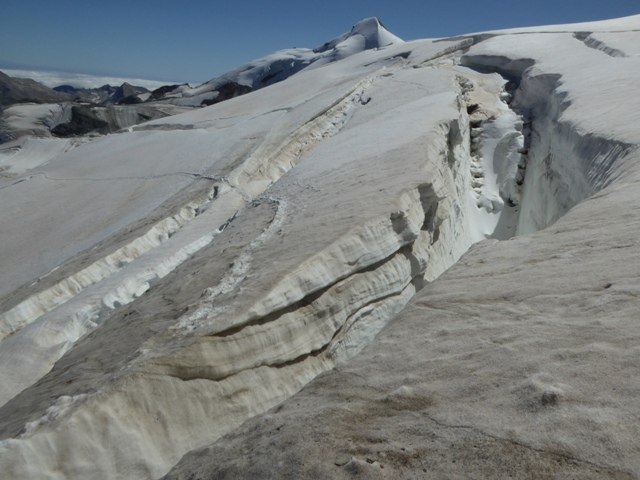 Another very dicey section in which we needed to walk over a snow bridge that was only a few cm thick: 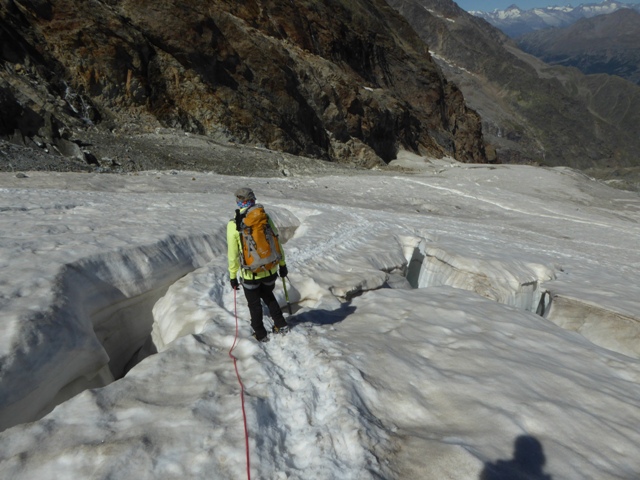 I lost count of the number of apparently bottomless crevasses we jumped over. Towards the end, the glacier was bare ice with no snow cover, making it easier to see and avoid crevasses. The final few hundred metres were over slushy melting ice. Apparently the glacier was much further down the valley this time last year 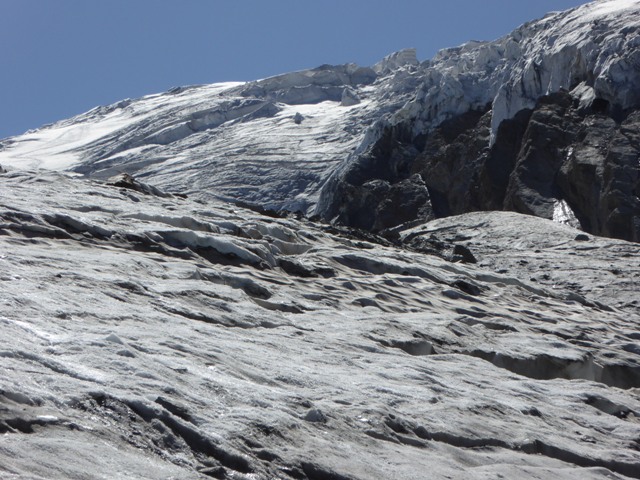 Finally we made it back down to Langflue for a quick beer before catching the last cable car back down to Saas Fee. Overall, a tiring but highly rewarding day out on one of Europe's big peaks. I'd certainly recommend the Feehopf route of ascent over the glacier plod from Langflue.

Thanks to Thomas and Hildegard for a great day out

Wow - you sure did choose an exciting/scary way down

Thanks mate. The descent isn't so bad and preferable to downclimbing the Feechopf. I really wouldn't recommend both climbing and descending from Langflue though.

Pointless Parasite wrote:Thanks mate. The descent isn't so bad and preferable to downclimbing the Feechopf. I really wouldn't recommend both climbing and descending from Langflue though.

Yes but I think I'd do the reverse - climbing in the early morning when it's cold and the snow bridges are at their strongest.
when I climbed my Swiss 4000nders, the night freezing level was always well below 4000m now it can be above 5000

. I never thought of taking a waterproof - rain was unheard of, and any snow brushed easily off a pertex windproof

Looks an impressively glaciated mountain; I can see why you'd want to be roped to a guide with all those crevasses to be negotiated/avoided. The rock ridge looks spectacular too. Nice one