Wed 11 Sep
Alison had been at a conference in Manchester; I was to pick her up in Carlisle, and from there, we’d drive to the Sill Youth Hostel, in the teensy (don’t blink or you’ll miss it) but fantastically cool-named village of Twice Brewed, not far from the Sycamore Gap on Hadrian’s Wall. All in Northumberland.

I drove south a few hours early, thinking that the “Historic Carlisle” that I’d never visited might be a good place to do some exploring. I was sorely disappointed, in much the same fashion that I thought—a few years ago now—that Campbeltown was worth visiting. I did have a walk around the town centre, but like so many high streets these days, it was full of “closing down sale” and “to let” signs, a few charity shops, and precious little else. After I’d gathered a few supplies, I gathered Alison too, from the station, and we made our way to the hostel, arriving just as darkness was falling.

We shared our room with two others this night, sisters, I think, that we never actually talked to or saw; they were already in bed when we returned to the room after having dinner, and they were still in bed when we set off the following morning. It wasn’t a restful night, as there were several trips made to the loo (before midnight!) by neither Alison nor myself, followed by a phone announcement of imminent precipitation in the area, followed by long, loud, and proud snoring.

We set off early, as prolonged rain was due by late morning. Leaving from the hostel, we crossed the B6318 and made our way up the minor road until we reached the signpost for Steel Rigg. 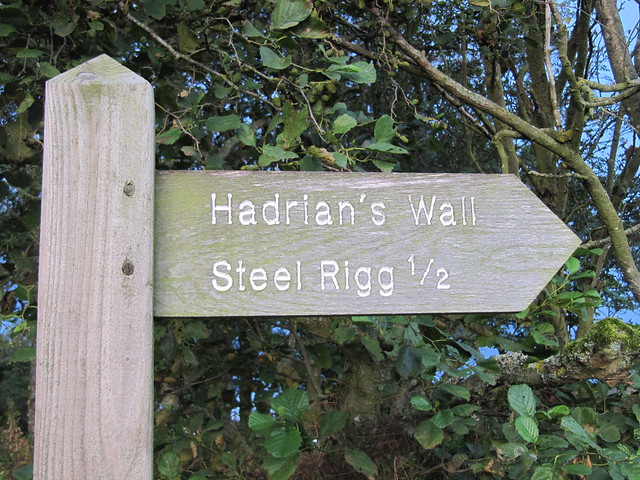 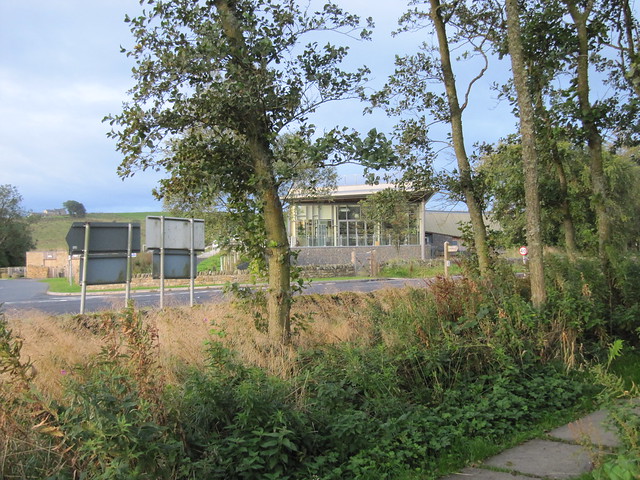 looking back through the trees at the hostel / visitors centre

After a short but stiff climb up to the Rigg (Scottish for “ridge” apparently, based on later research), we headed east, and up down up down up down across various escarpments, spending a lot of time taking photos at Sycamore Gap, and wandering around Housesteads Fort (not yet open for the day). The scenery was quite dramatic; wide open skies the like of which you don’t often see in Scotland. 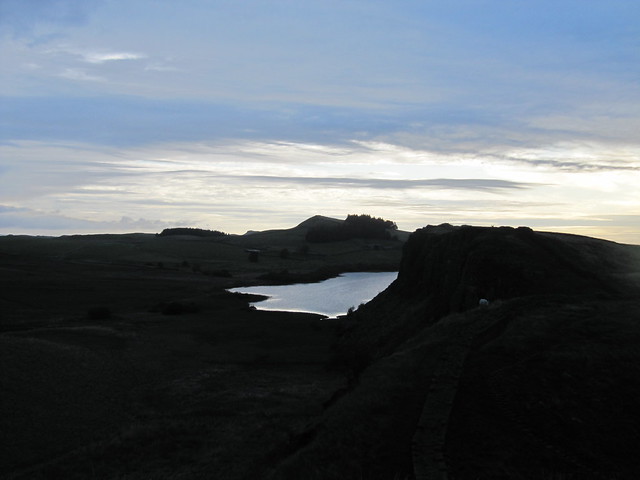 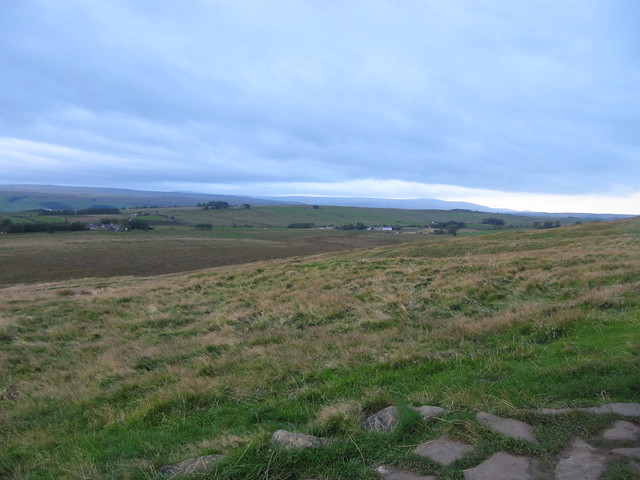 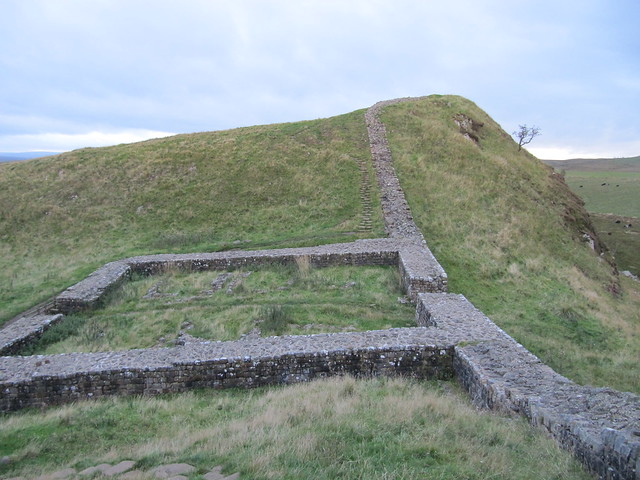 a milecastle, or maybe it's a turret 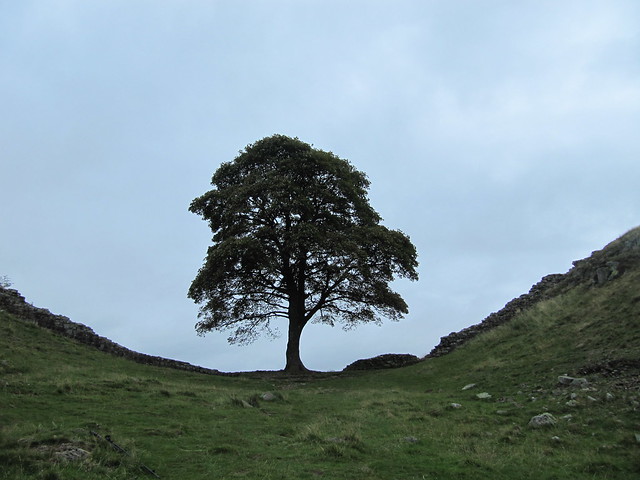 Sycamore Gap; I daresay a highlight of the route (certainly today's route, anyway) 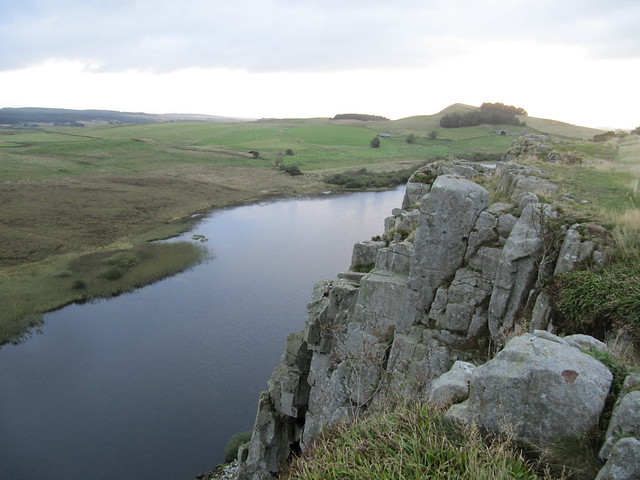 some impressive escarpments and crags 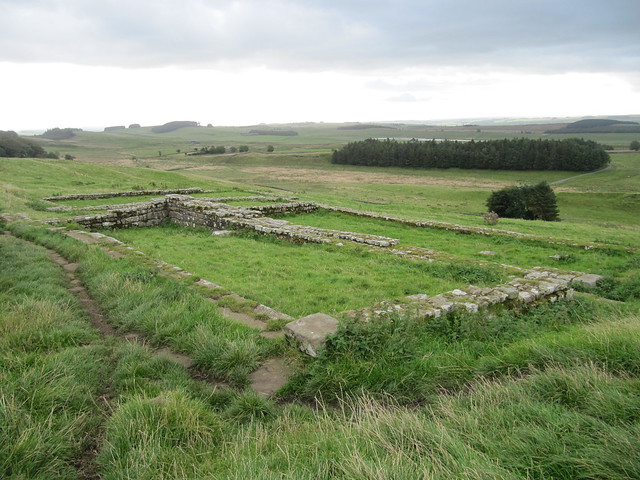 The clouds gathered, and the rain began soon after we started making our way back toward the hostel, on a route slightly to the north of the wall, which let us marvel at all the engineering works and escarpments from their “other” side, and from a distance. We made a lengthy detour around a bull in a field that was eyeing us up suspiciously, and didn’t seem inclined to move out of our way, and possibly inclined to move toward us. 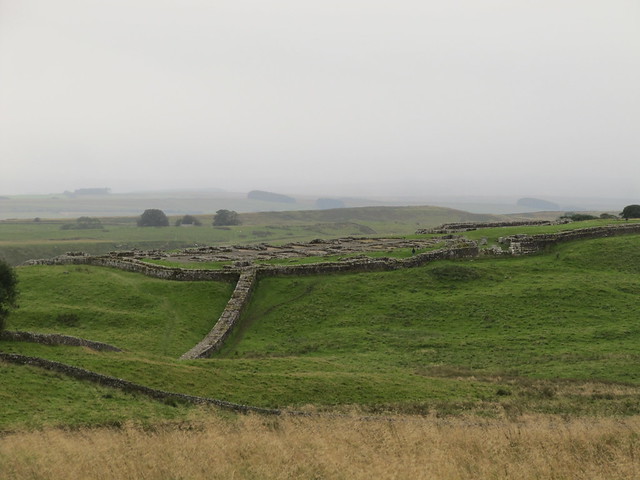 looking back over Housesteads; rain imminent...

The rain, although not heavy, was of the ilk that eventually drenched us, and it was two drowned rats that returned to the hostel in the early afternoon. We’d already decided that there were worse things than spending an afternoon reading, drinking tea, and eating biscuits, and we did just that.

A fun fact about Hadrian's Wall: it was built in only SIX YEARS!

Today, we headed in the opposite direction along the Wall than we’d walked yesterday; that is, west. We didn’t really have a plan, or, actually, we had various loose-y goose-y plans—we’d see how we felt later in the day before deciding how far to go, or which route to follow back to the hostel. 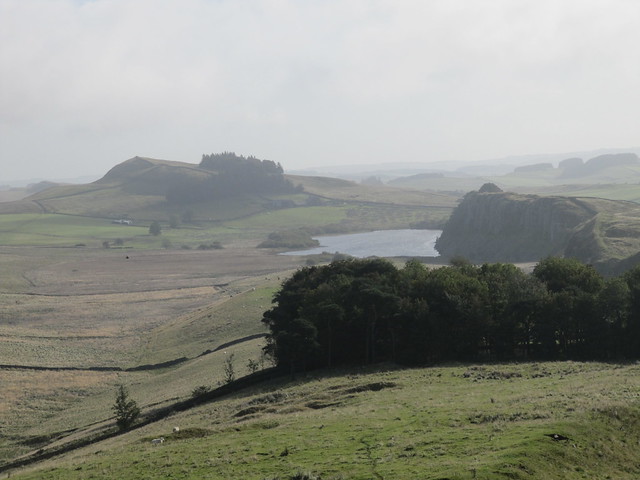 looking back over part of yesterday's route 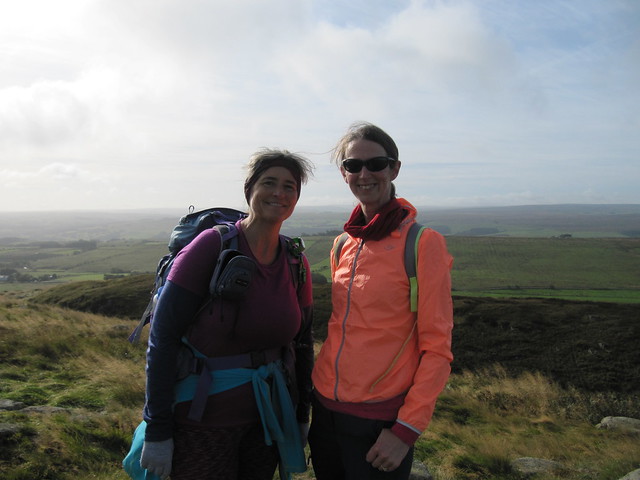 at the high point of Hadrian's Wall (Winshield Crags; 345m) 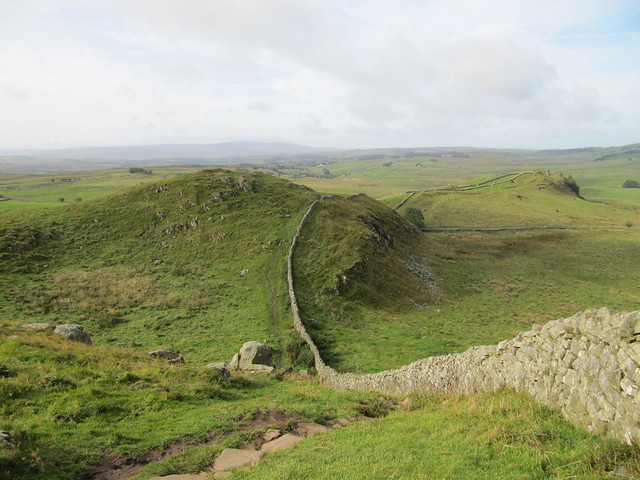 more up and down ahead, but the crags eventually smoothed out into more rolling hills 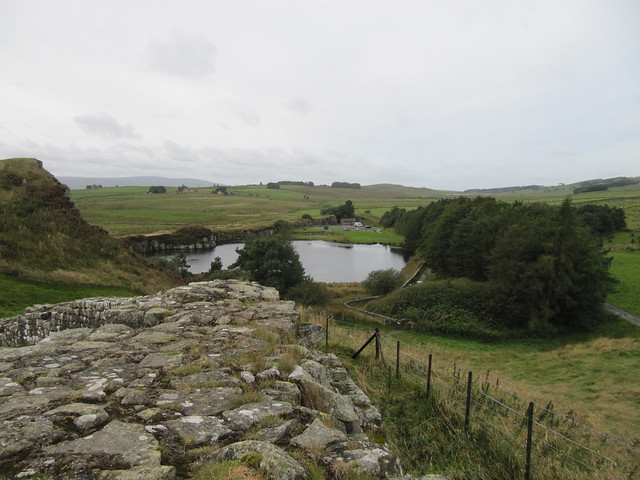 looking down onto the disused quarry (near Cawfield Crags), where we stopped for lunch

Well. Best-laid (no) plans, and all that. We walked along the wall as far as Turret 45A, near Walltown Crags. From here, we descended down to a minor road that took us along a cycle track that paralleled a short section of the busy B6318. 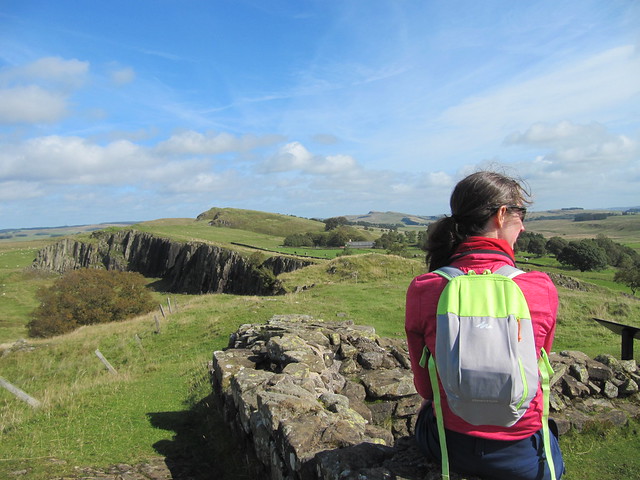 Alison at Turret 45A, where we left the wall and headed toward Haltwhistle

Another minor road (Cycle Route 72) took us into Haltwhistle, where we had a (second) late lunch, and discussed the various options for returning to the hostel. We were reluctant to retrace our steps back up to the wall; we were also reluctant to do a long stretch along the B6318. We’d already learned the hard way that “paths” on the map didn’t necessarily correspond to “paths” in reality, so preferred to stick to quiet minor roads and “official” paths. Cue the River Tyne Trail, which appeared prominently on the print version of OL43, but inexplicably didn’t appear as prominently (or at all) on the OS version that was on my phone.

We crossed the South Tyne via the Alston Arches viaduct, and carried on along the Trail until we’d nearly reached the end of the minor road. We’d been looking for a place to cross back over the river *before* we reached the “Stepping Stones” clearly marked on the map, but we’d not found a bridge, in spite of the fact that the map indicated several crossing points well before then. Long story short, we spoke with a local woman we met along the road, who informed us that the nearest bridge was at Bardon Mill, still a fair distance away, and that it was very rough going once the road ended. She said there’d been no bridge along this stretch for at least 10 years, and that the river was far too deep and dangerous to be crossed at the stepping stones.

We resigned ourselves to the long walk back into Haltwhistle, where we were hoping we’d still be able to catch a bus to the hostel. Nope. By this time, it was after 6pm, and after a bit more dithering and discussion, and realizing that it was a good 4 miles back to the hostel, we decided to call a taxi, and paid the exorbitant price of £15.50 – nearly £4 per mile!!

With hindsight, we regretted not questioning the amount at the time.

We had a late start, taking our time packing up, having a wee mooch in the shop, and sitting in the sun on the rooftop garden. It felt strange to be driving again, after walking on the previous two days directly from the hostel.

We drove through Bardon Mill, and carried on a short distance toward Ridley. We walked for a good distance along the River Allen; on the east bank on the outward route, and the west bank on the return. 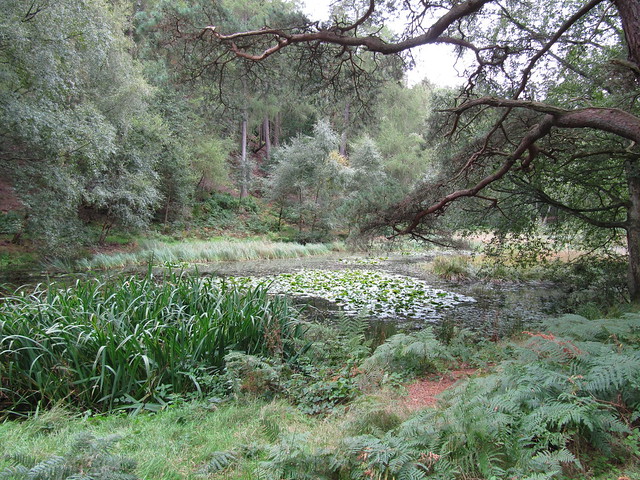 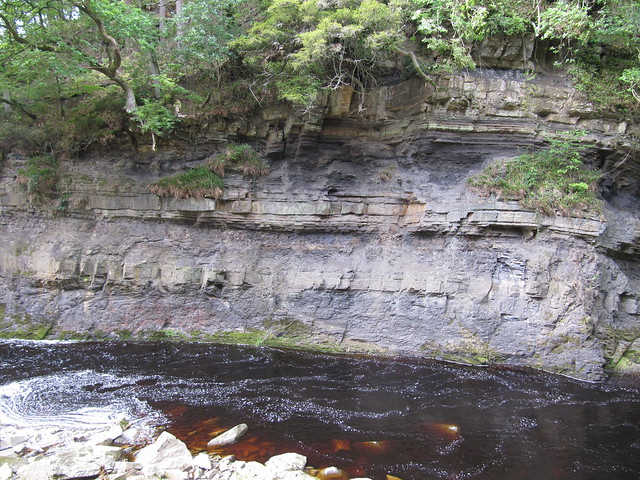 a wee "gorge" along the way 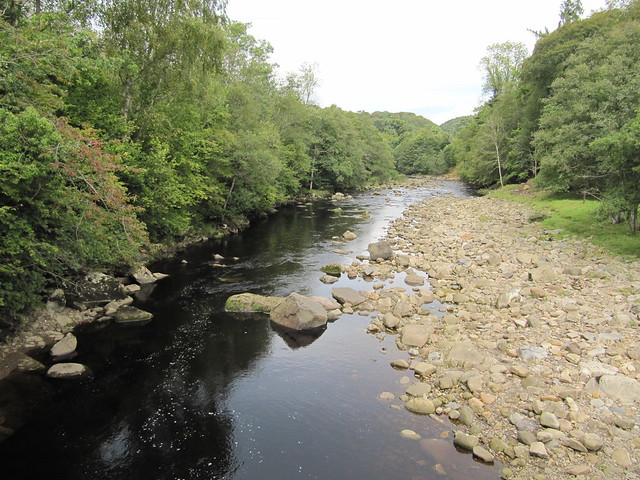 plenty of pastoral river views along the way

It reminded me very much of the walk along the River Clyde, at New Lanark. We stopped for lunch near Plankey Mill (on the return), and dipped our toes in water that felt cold enough to be snowmelt! We wondered how it could possibly be that cold.

From there, it was back to the car, to head home. What lovely country, company, and walking. An unbridled success!