After a few cloudy and cool days, the weather turned much warmer and sunnier! Unfortunately this brought out the local insect life with a vengeance: we were plagued by flies and clegs for much of the way. Apart from that, this was a great day in the hills: varied and interesting, but not difficult, walking with terrific views.

The route starts from the shore of Grovfjorden - there is enough space for a couple of cars on the side of the road and a wooden sign marks the start of the path. This is initially a bit overgrown, but is well marked and improves as the the vegetation gets shorter, higher up in the trees. Skorvetinden look impressively steep and jagged from this side. Eventually, after a steady climb the path comes out of the woods and fades out: the paint marks continue towards a small knoll at 589m, but just before this you need to turn right and make your way up some grassy shelves to another knoll at 694m. From here a very bouldery ridge rises ahead: the first part of this is best avoided by following a stream to its left, before climbing out right to meet the ridge higher up. The ridge leads up to a cairn on the edge of a gravelly plateau. From here we turned right to follow the edge of the cliffs up onto the top of Skorvetinden: the rear side os thankfully a lot less steep than the front, but the summit cairn is in a spectacular location right on the edge.

After our lunch we headed back down more directly to the col, making use of a big snow patch to avoid the worst bouldery bits. Finally there was enough breeze to keep the flies away! On the far side of the col, the way up Keipen turned out to be easier and less steep than it looked, soon landing us on its broad summit, with superb views north-west to the islands off the coast.

The west ridge gave a simple descent to another col, and then some slightly steeper but still pleasant terrain took us down to and across a stream. On the far side, sheep tracks led us back round the side of the 694m knoll and connected us to the upward route, where the insect onslaught duly resumed as we regained the trees. 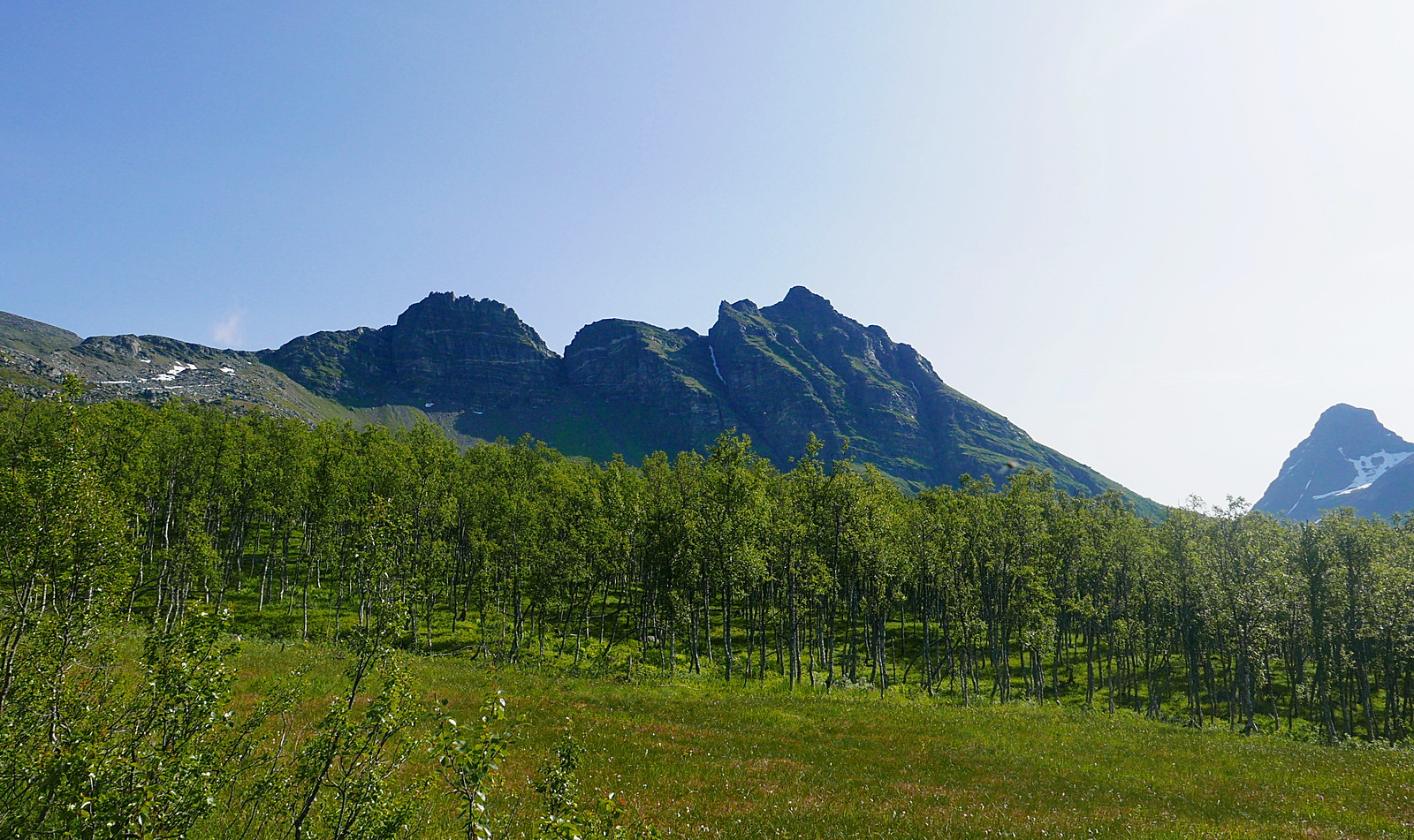 Emerging form the trees: Skorvetinden on the left 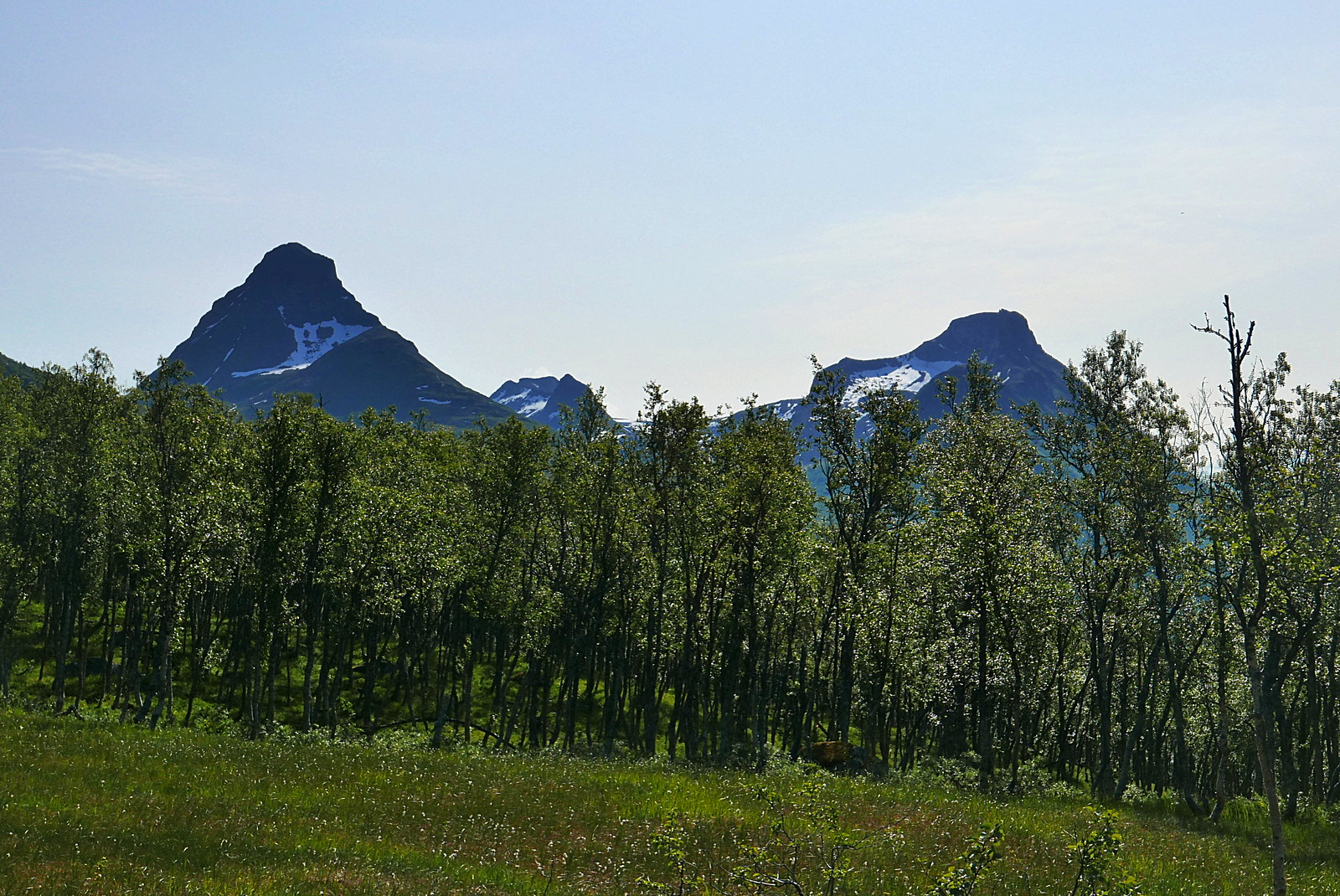 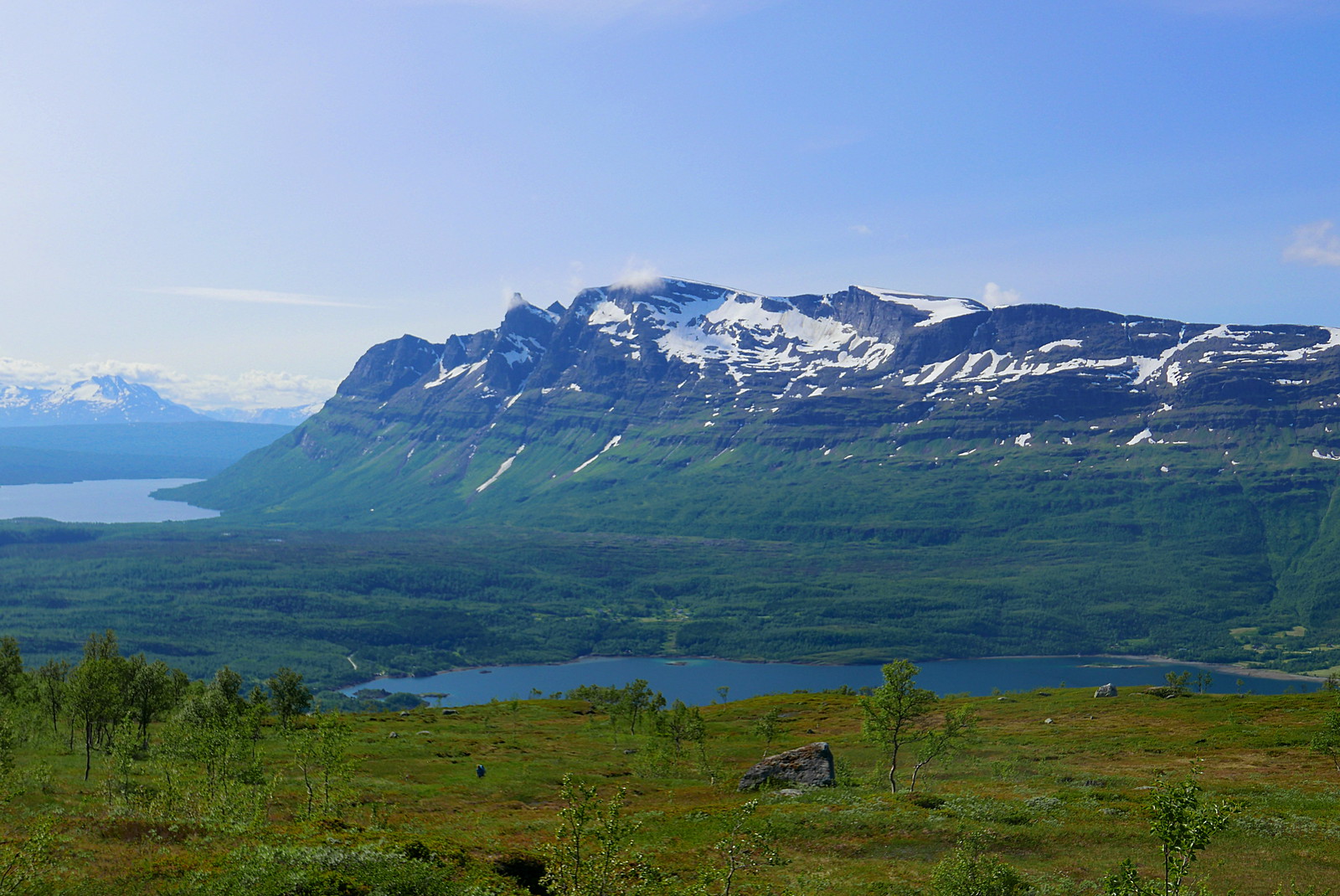 Across the fjord to Novafjellet 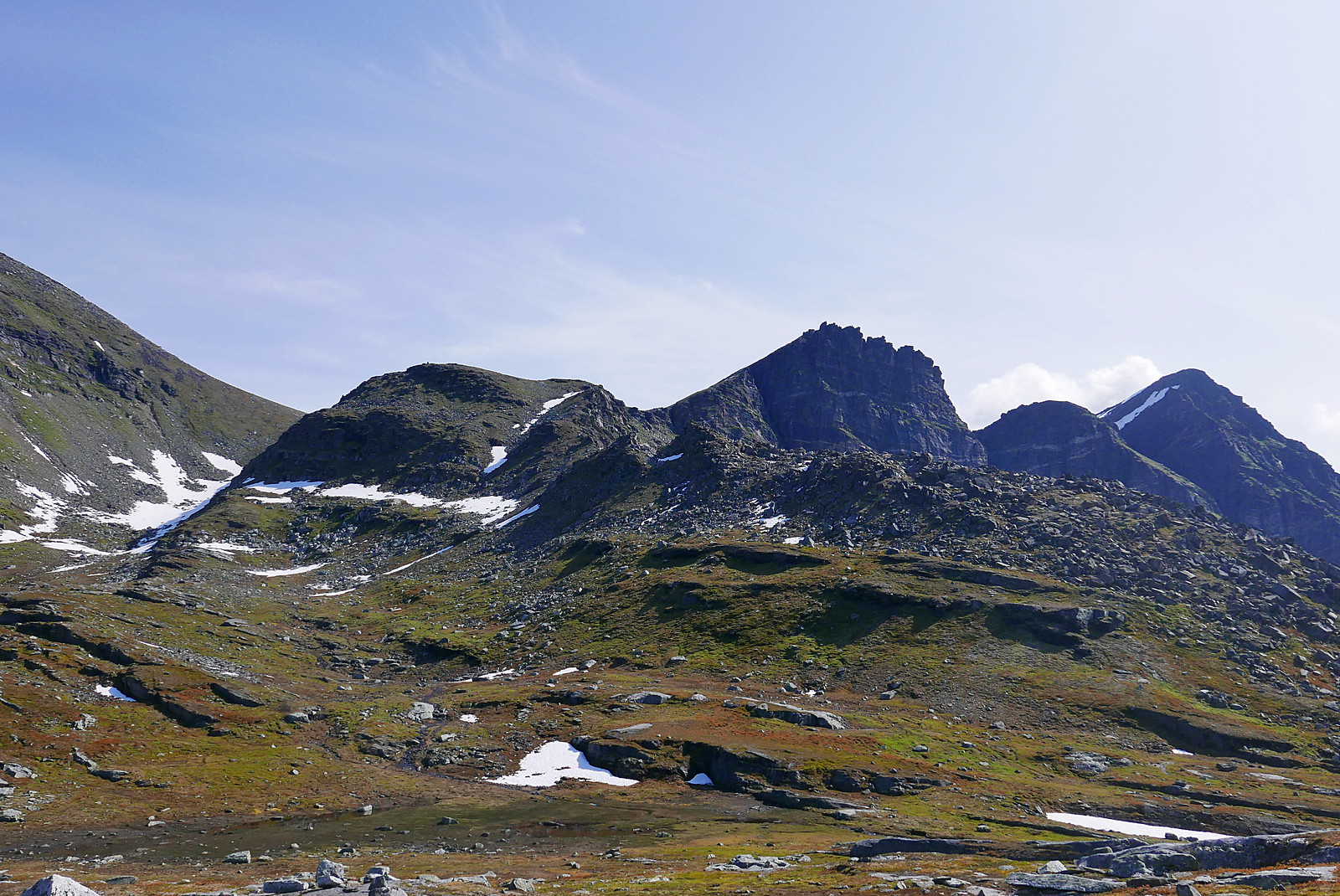 Skorvetinden from the 694m knoll 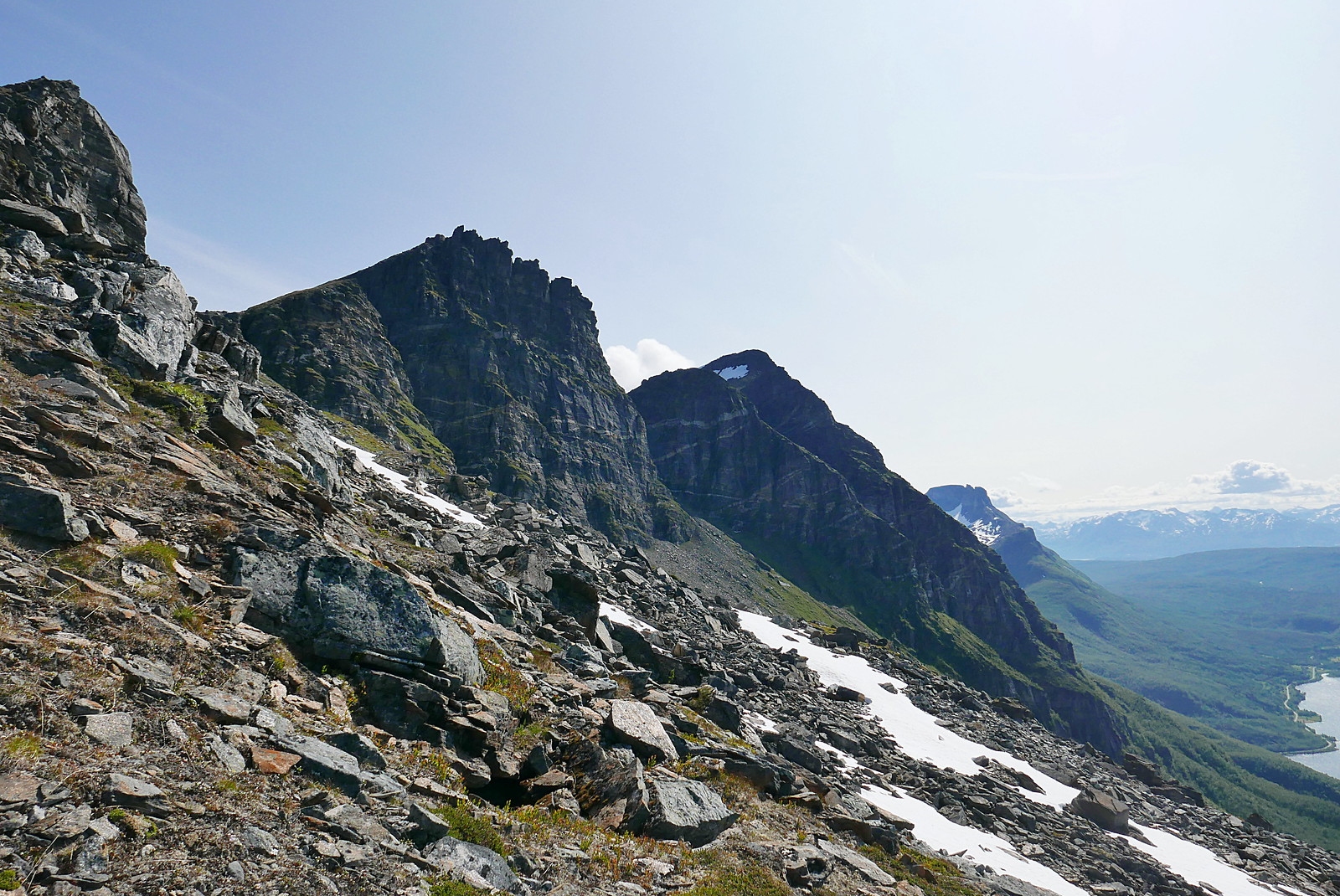 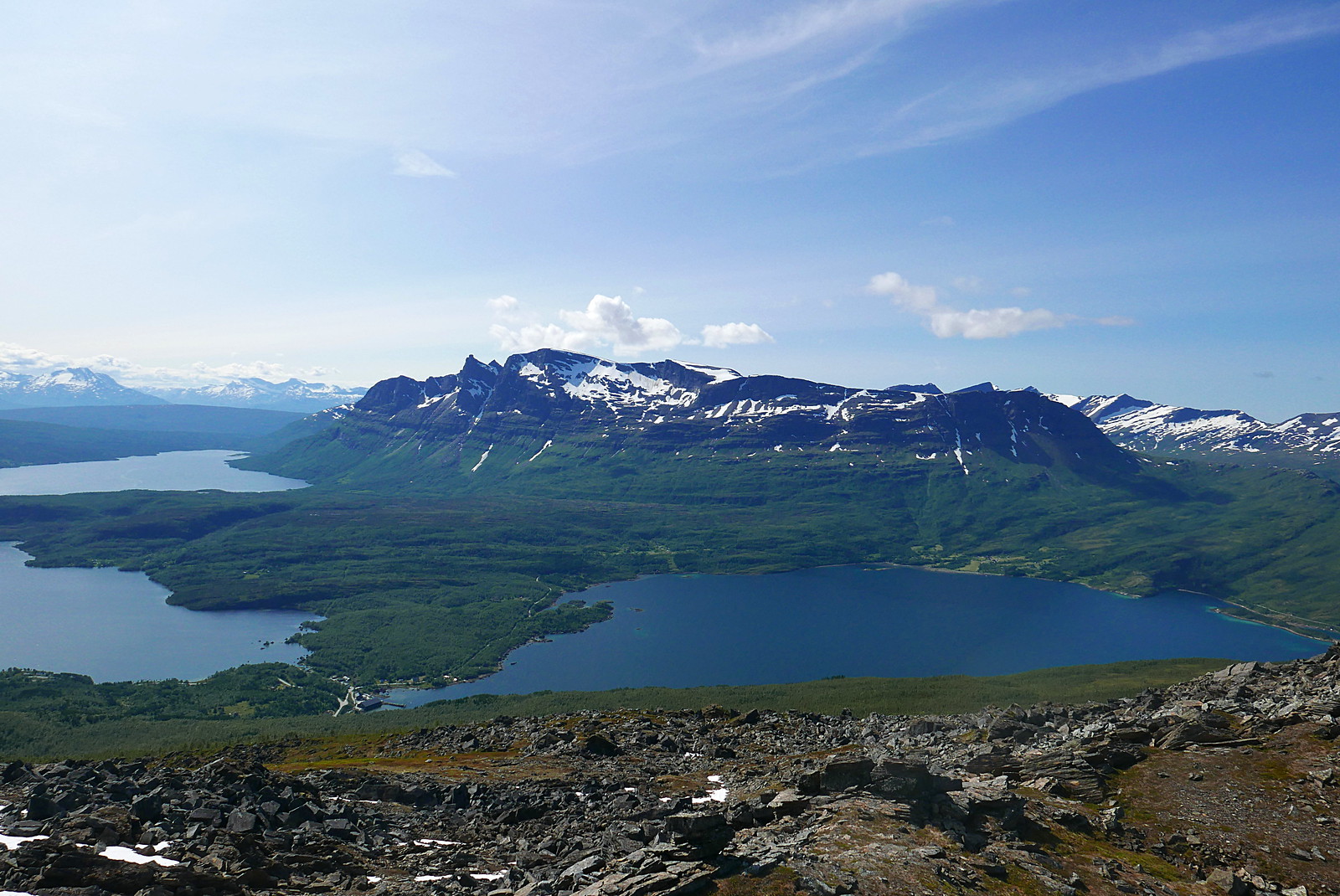 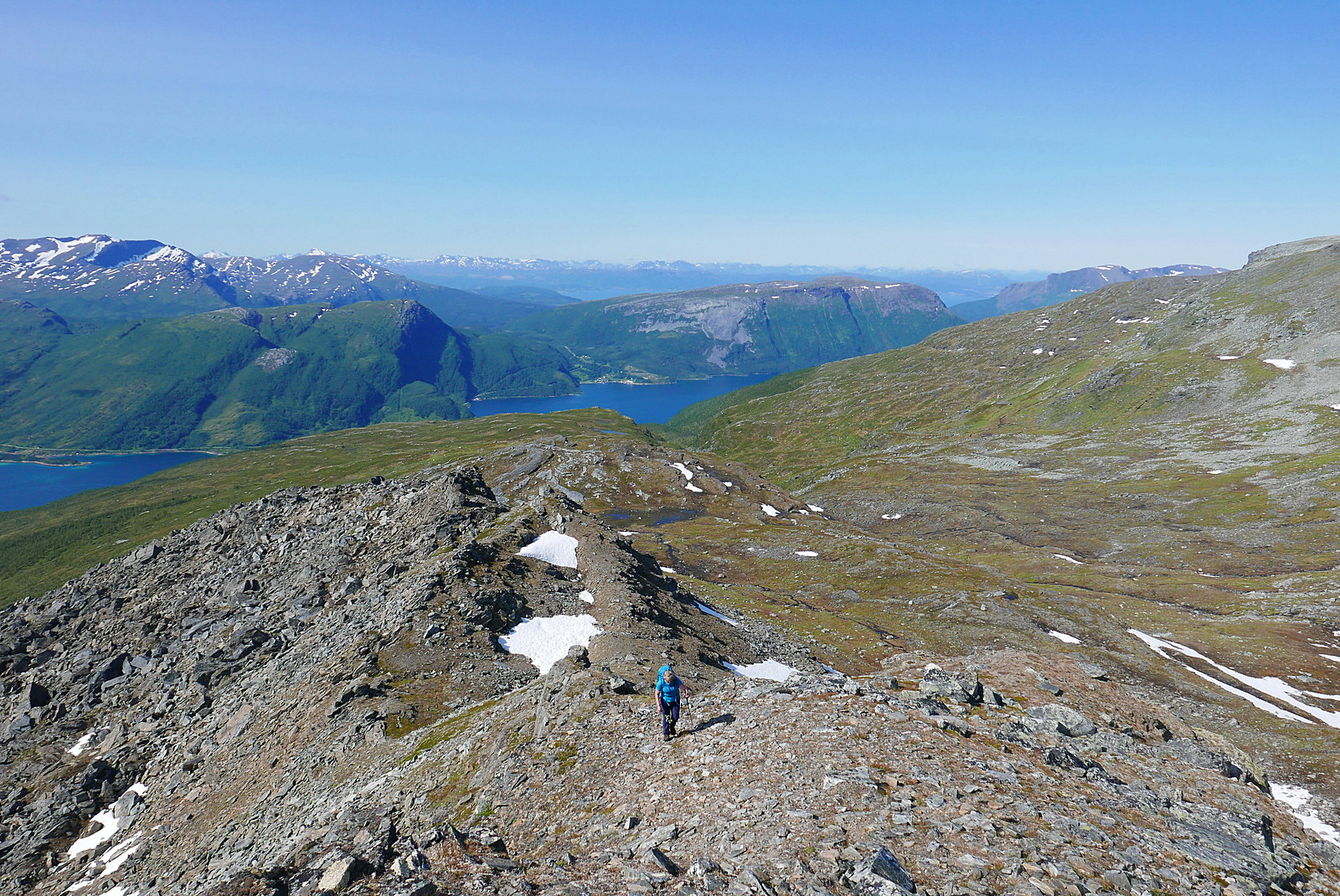 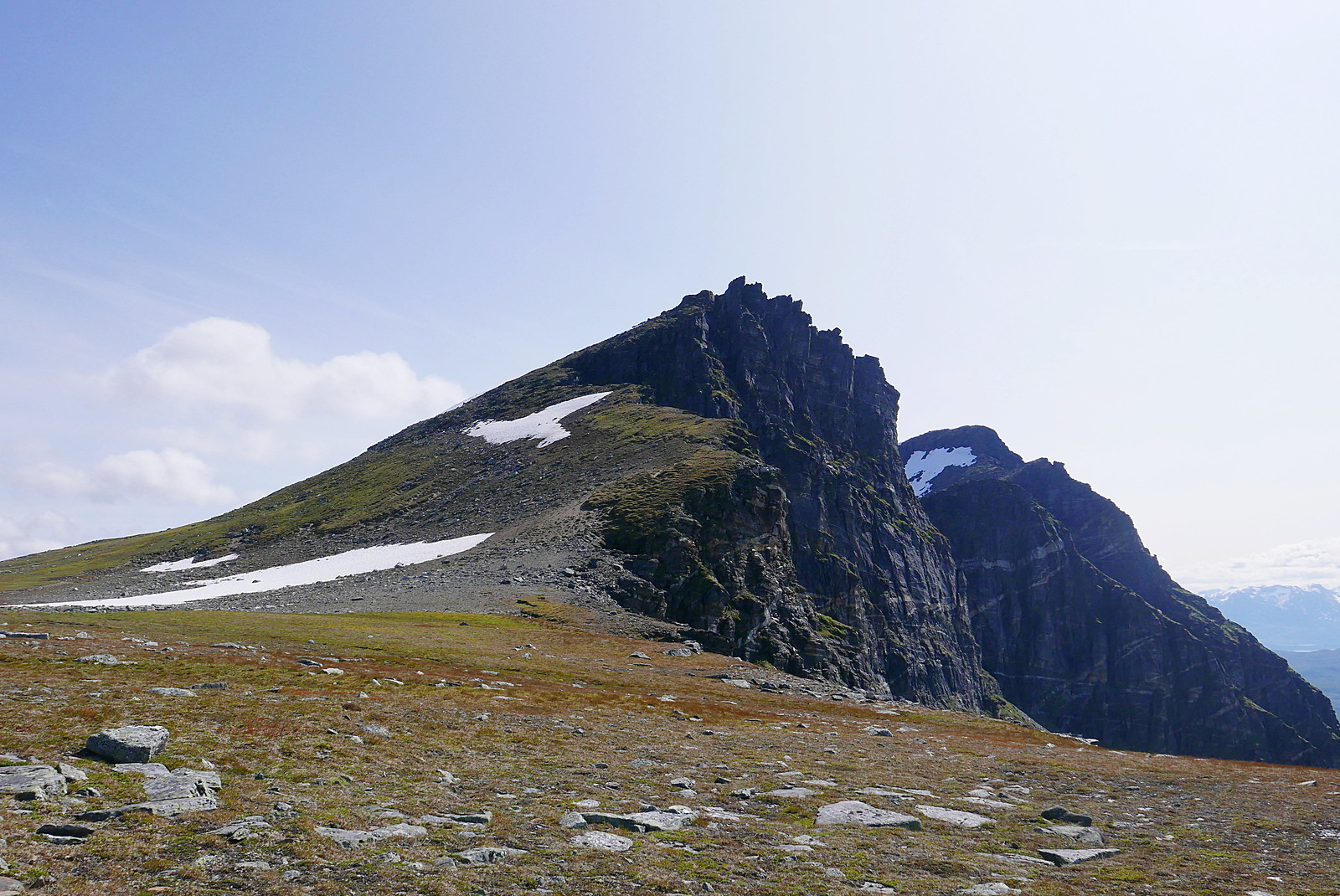 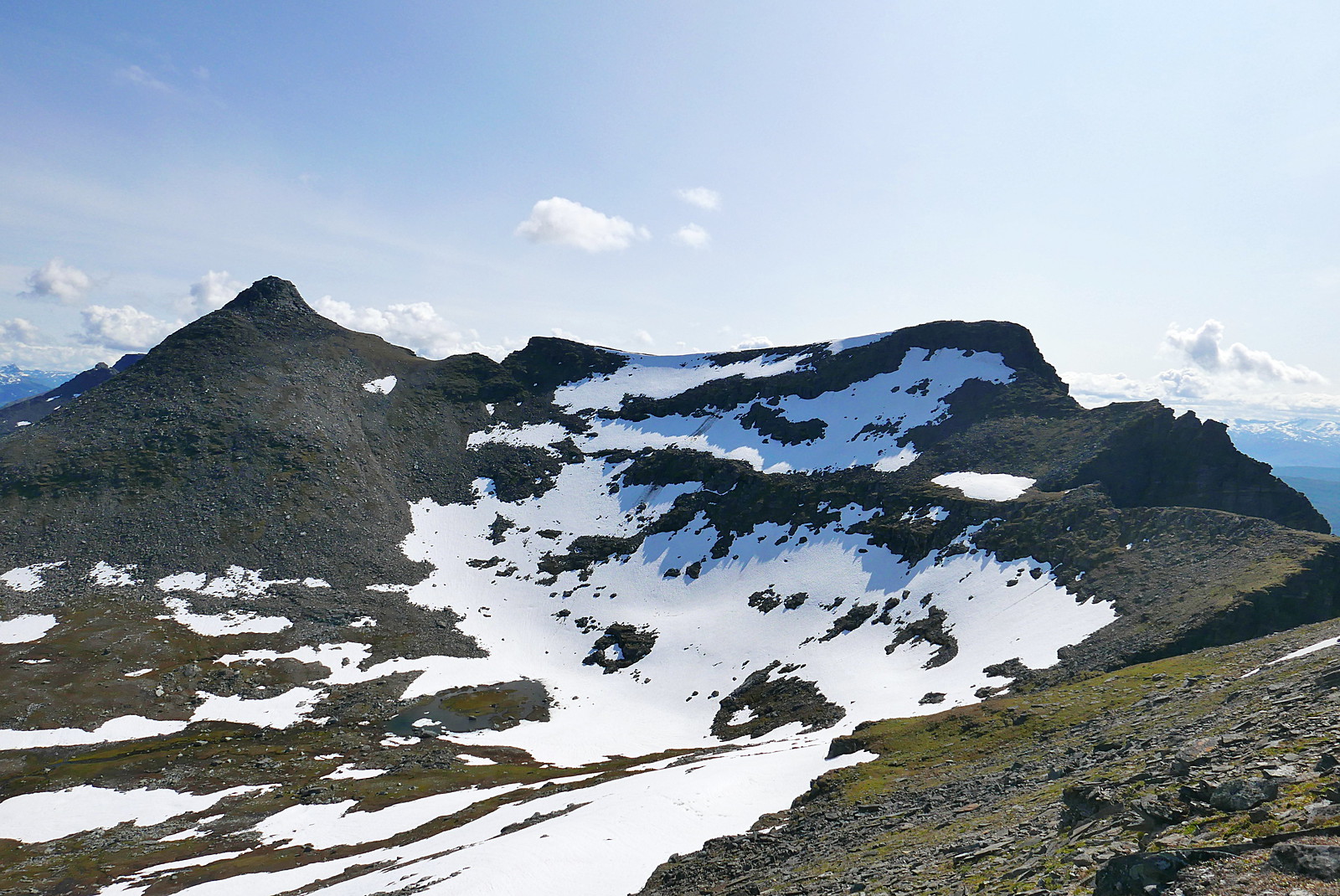 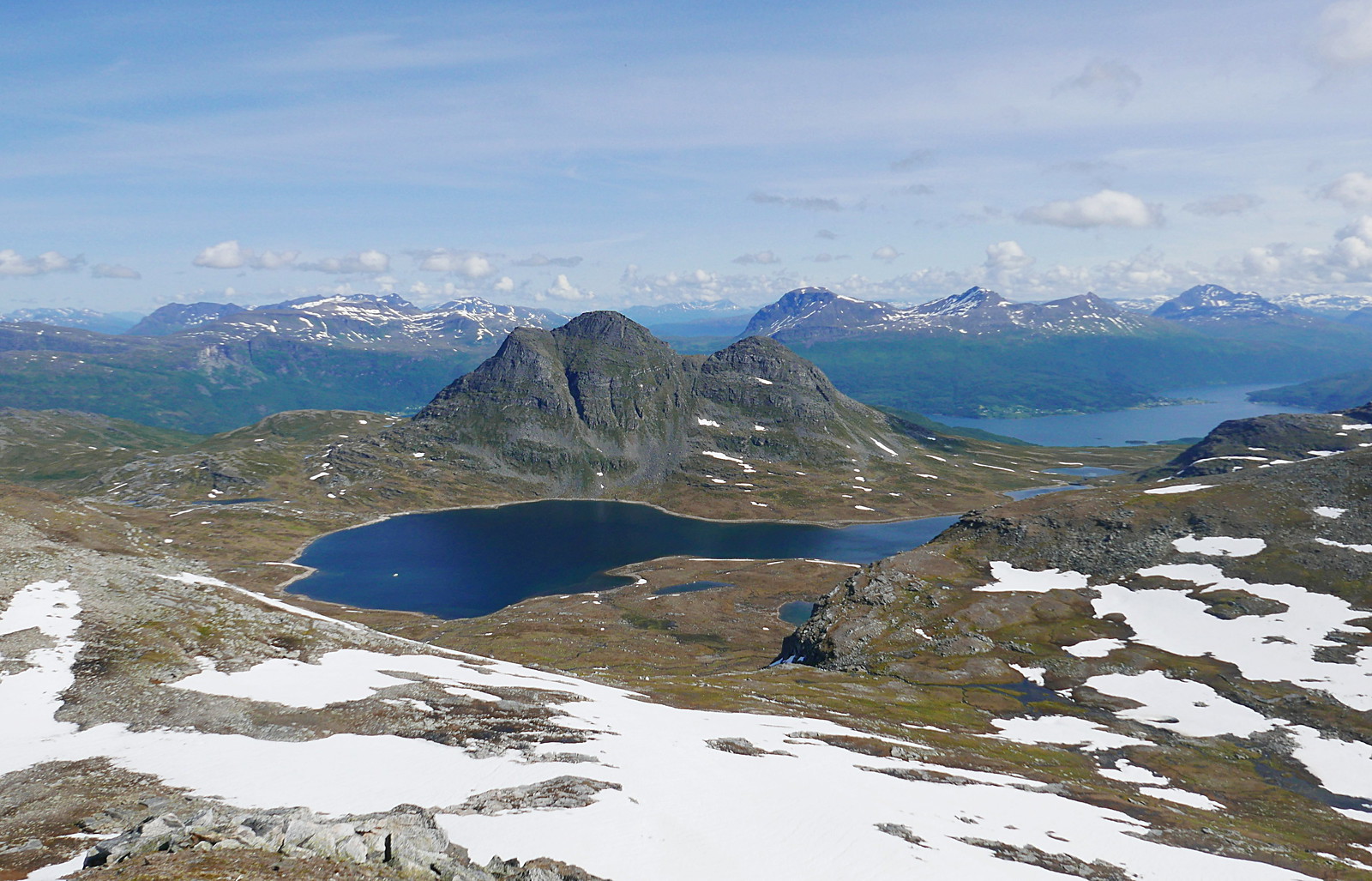 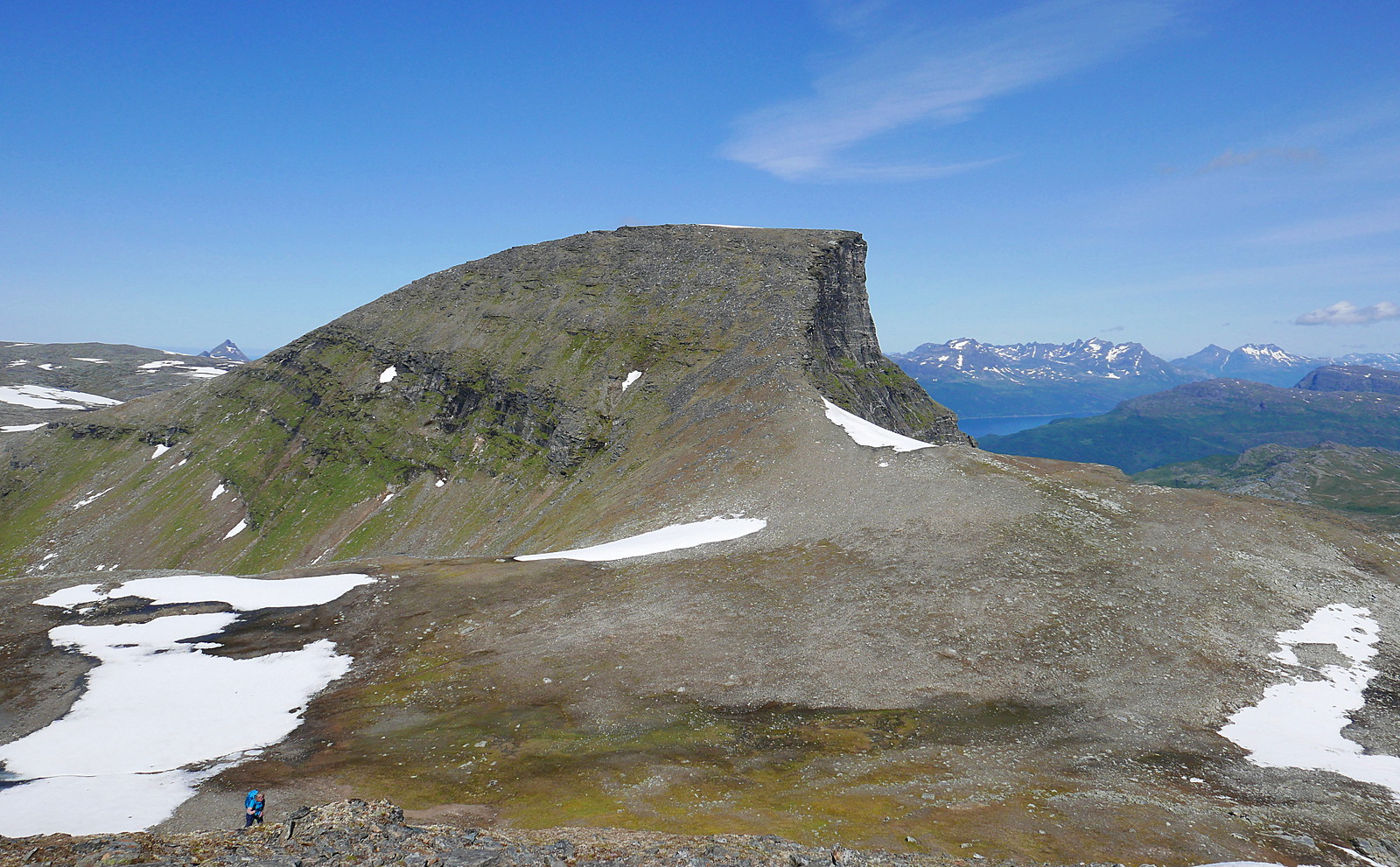 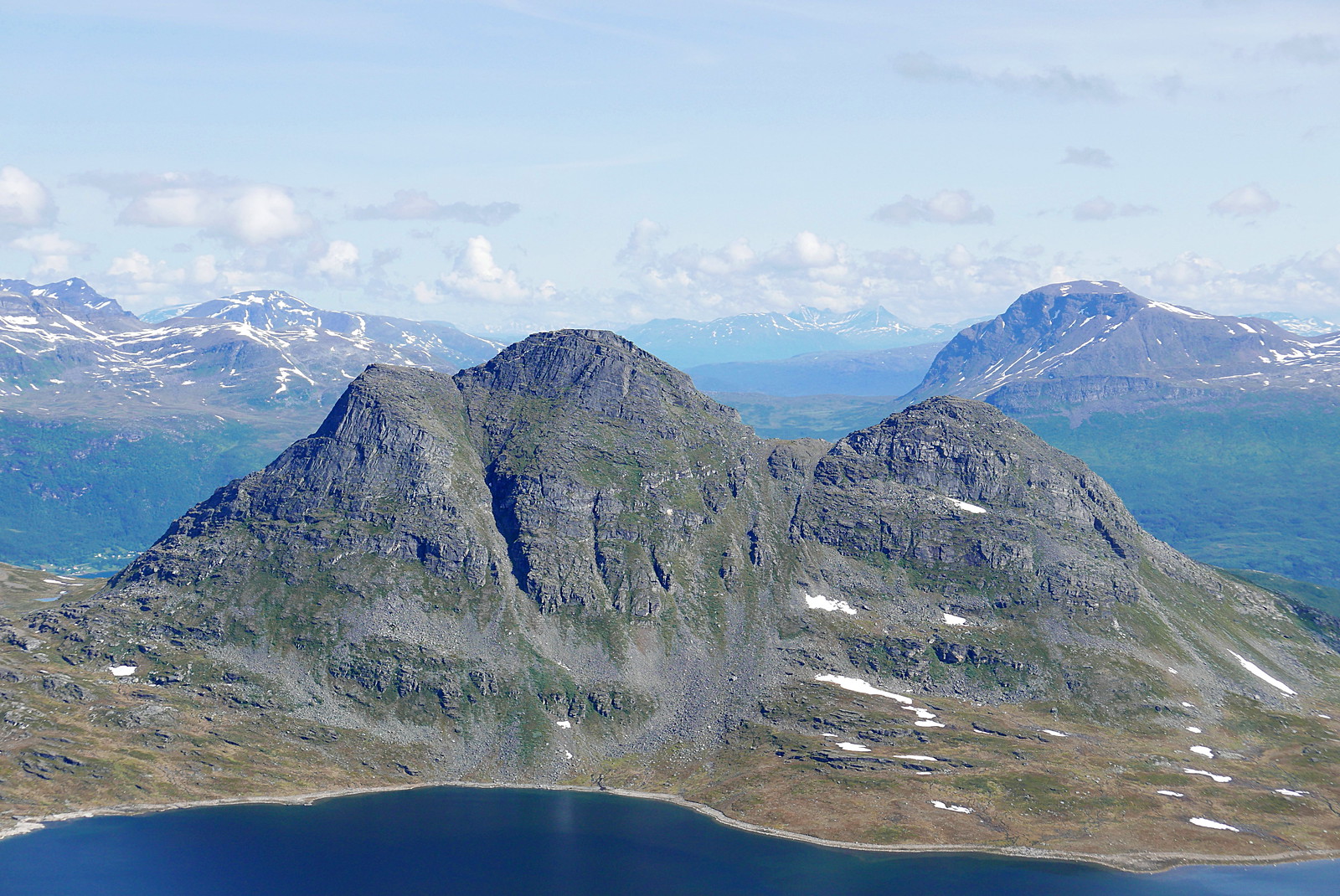 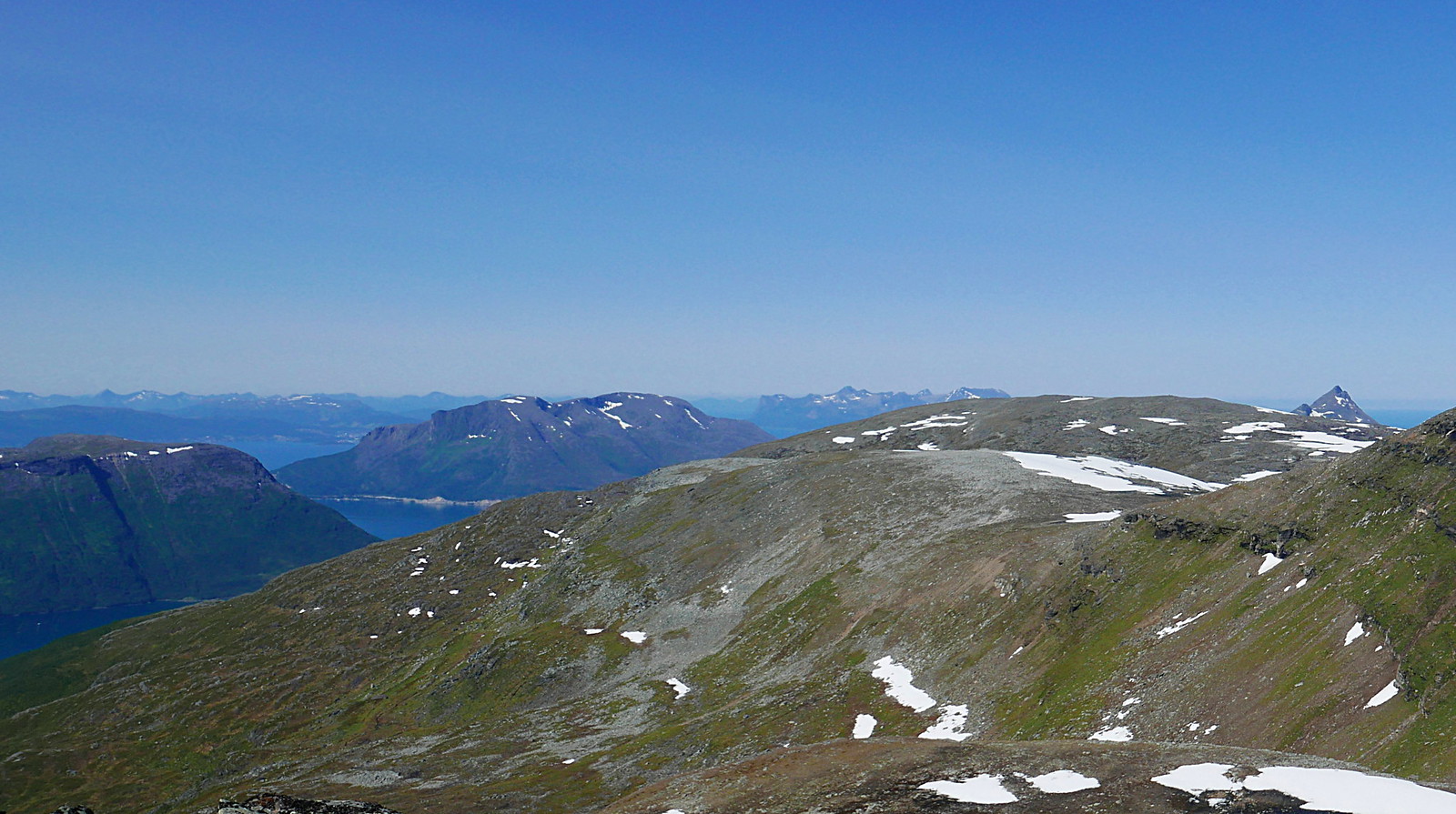 North-west to the islands 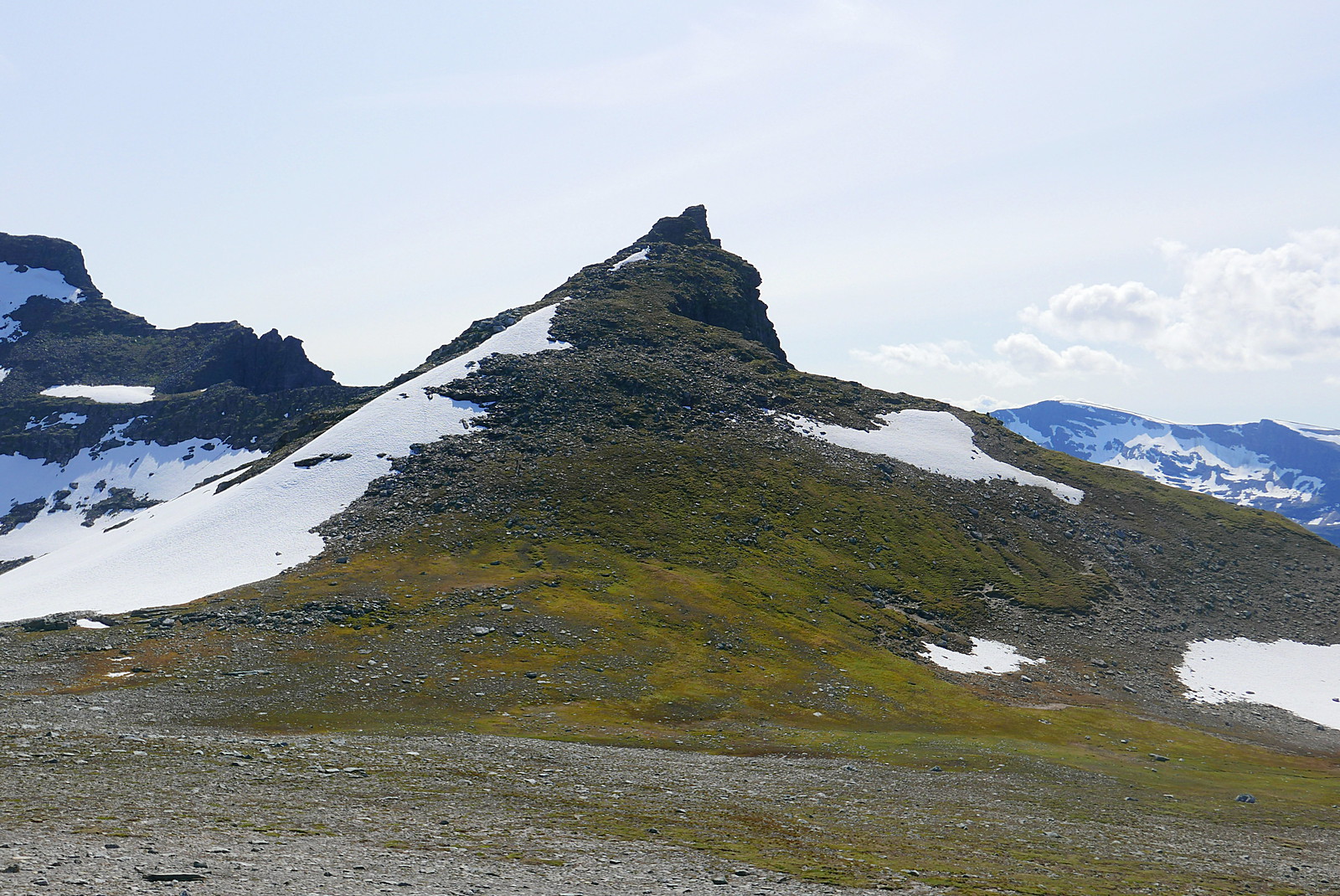 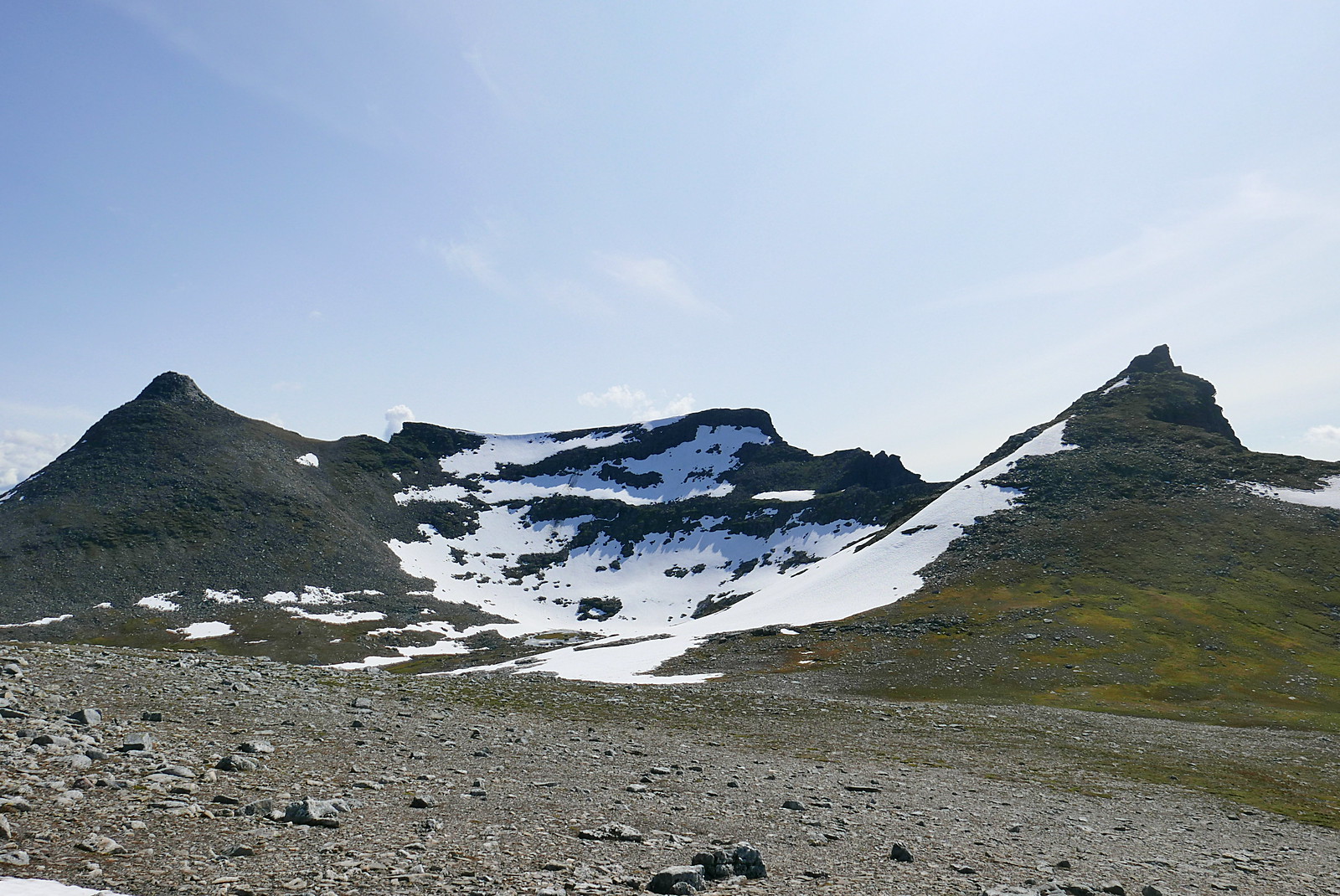 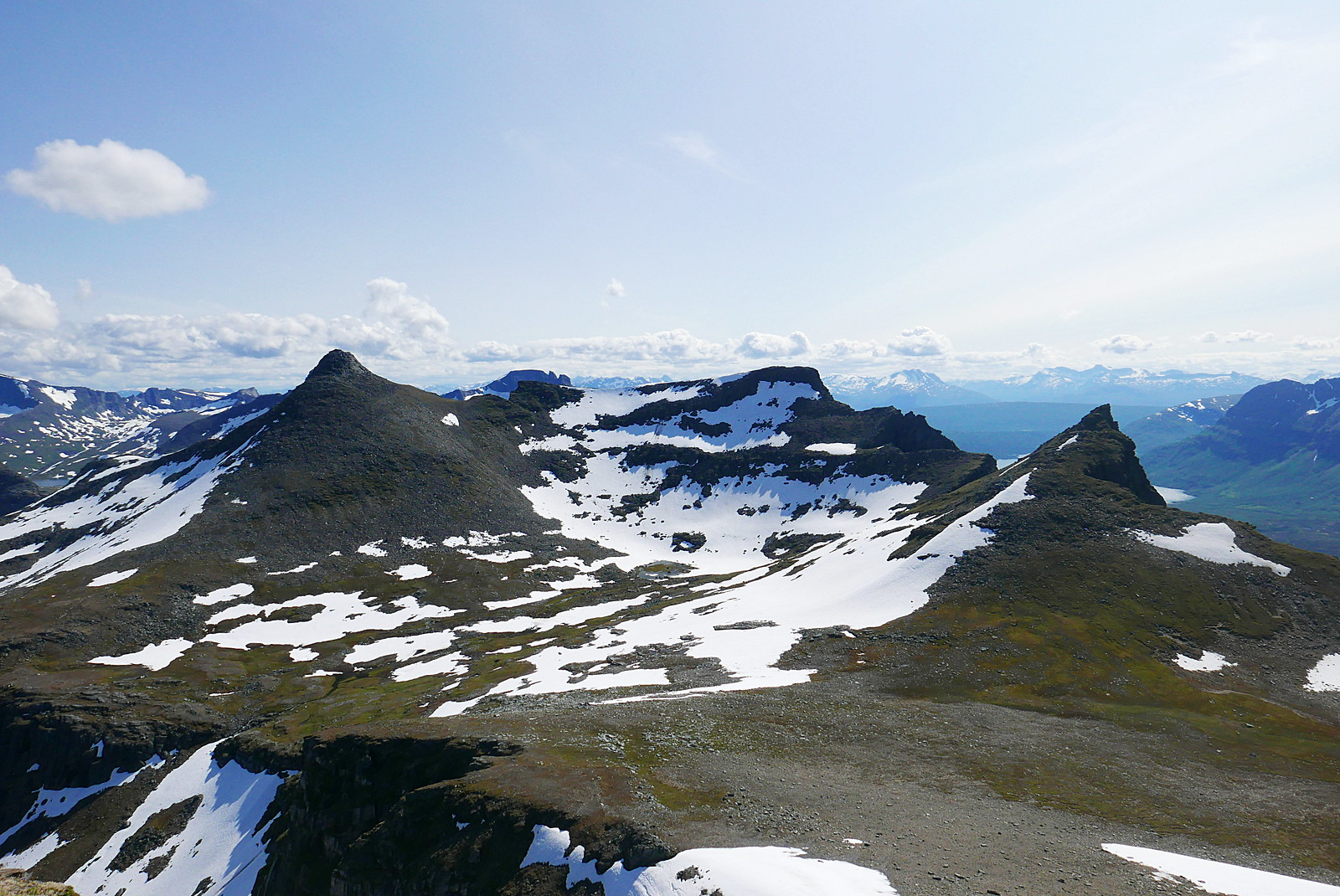 ...and again from higher up on Keipen 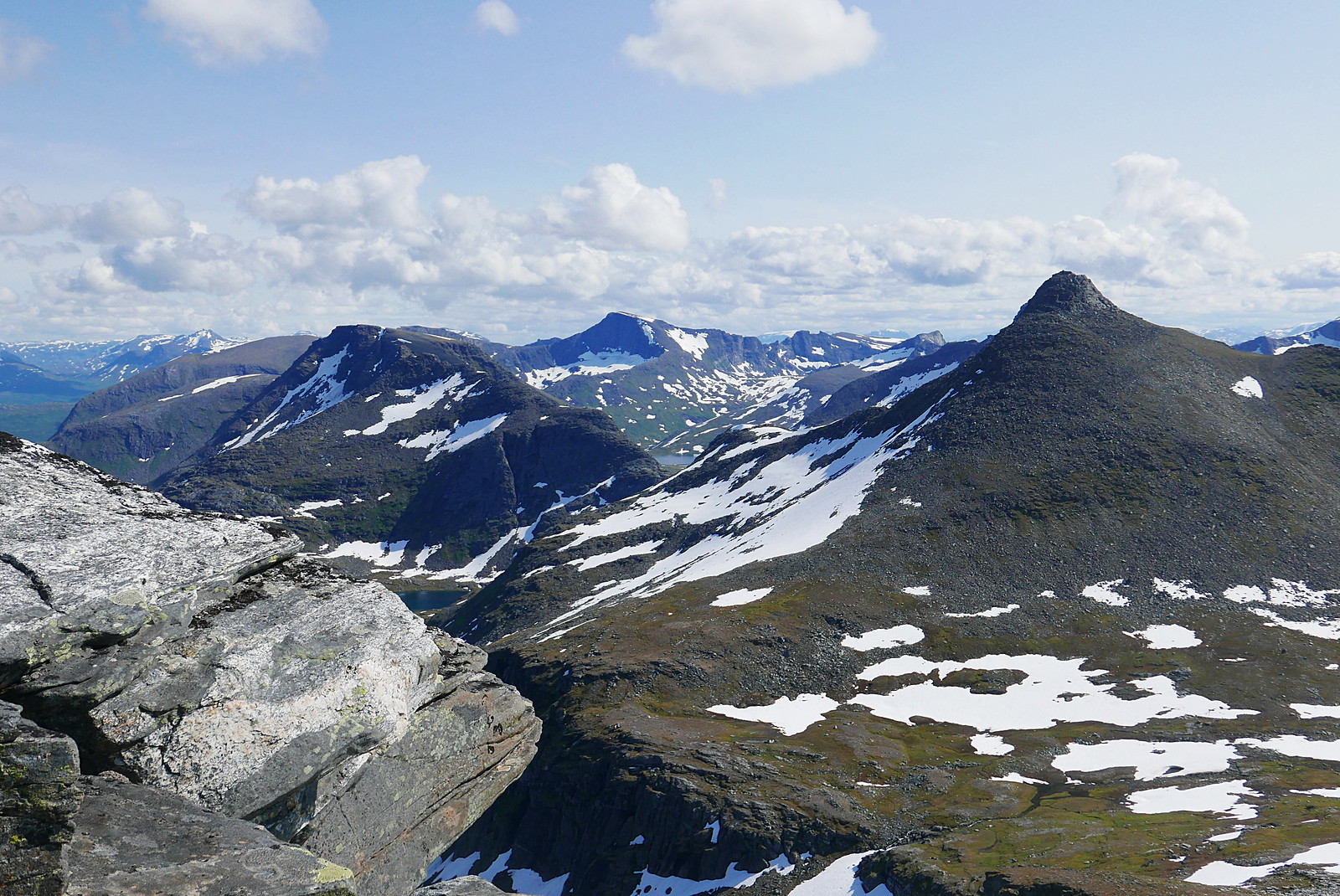 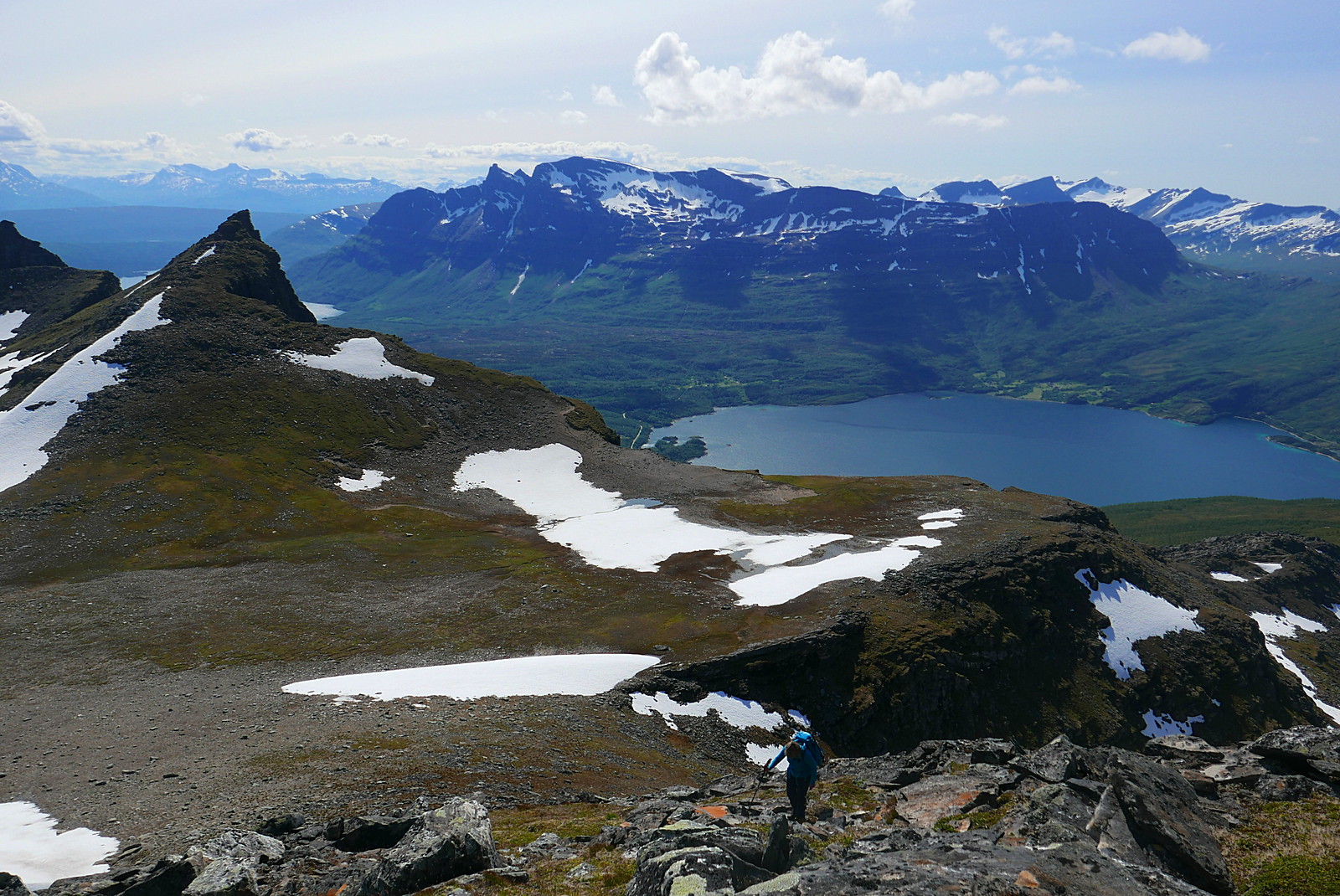 Nearing the top of Keipen 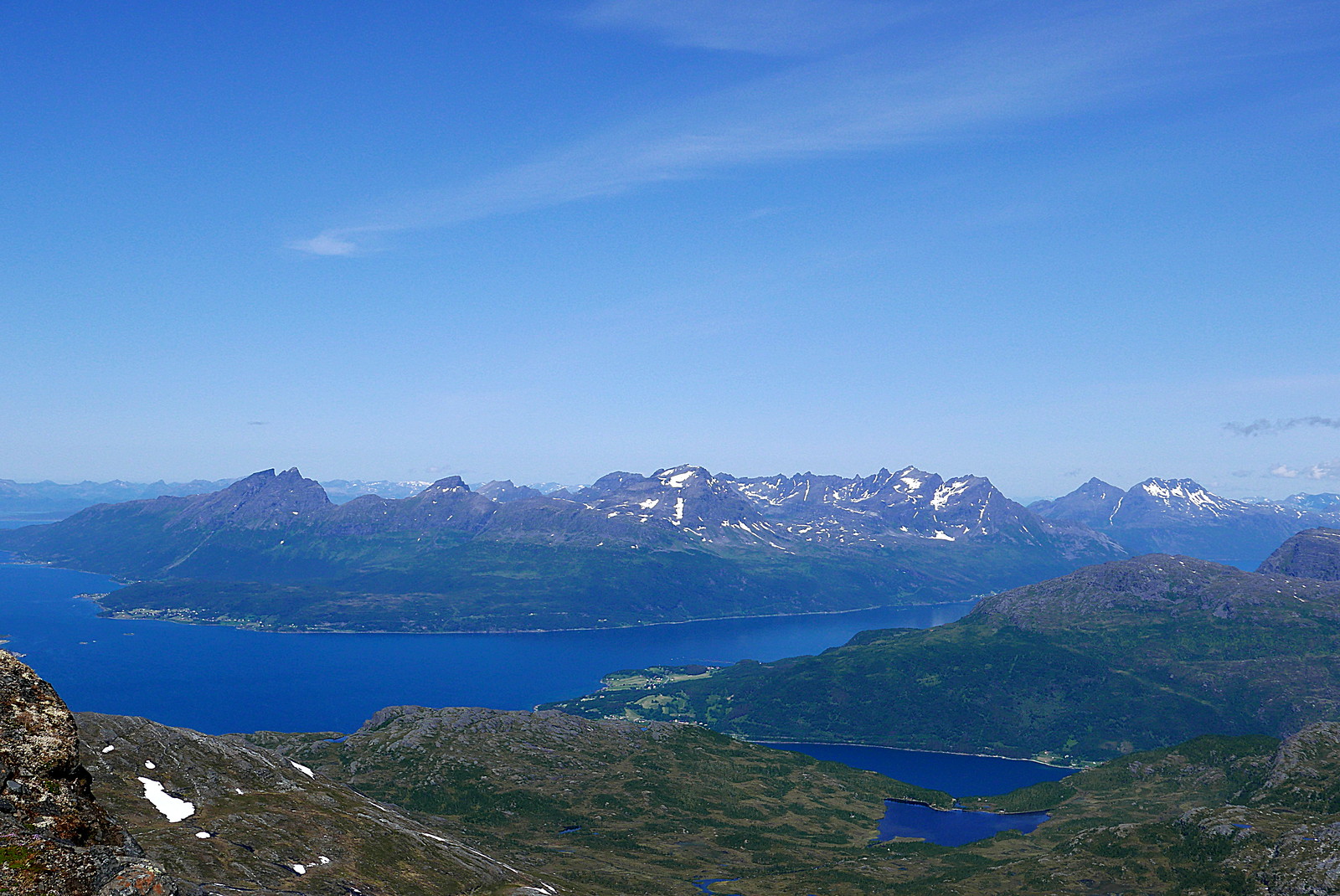 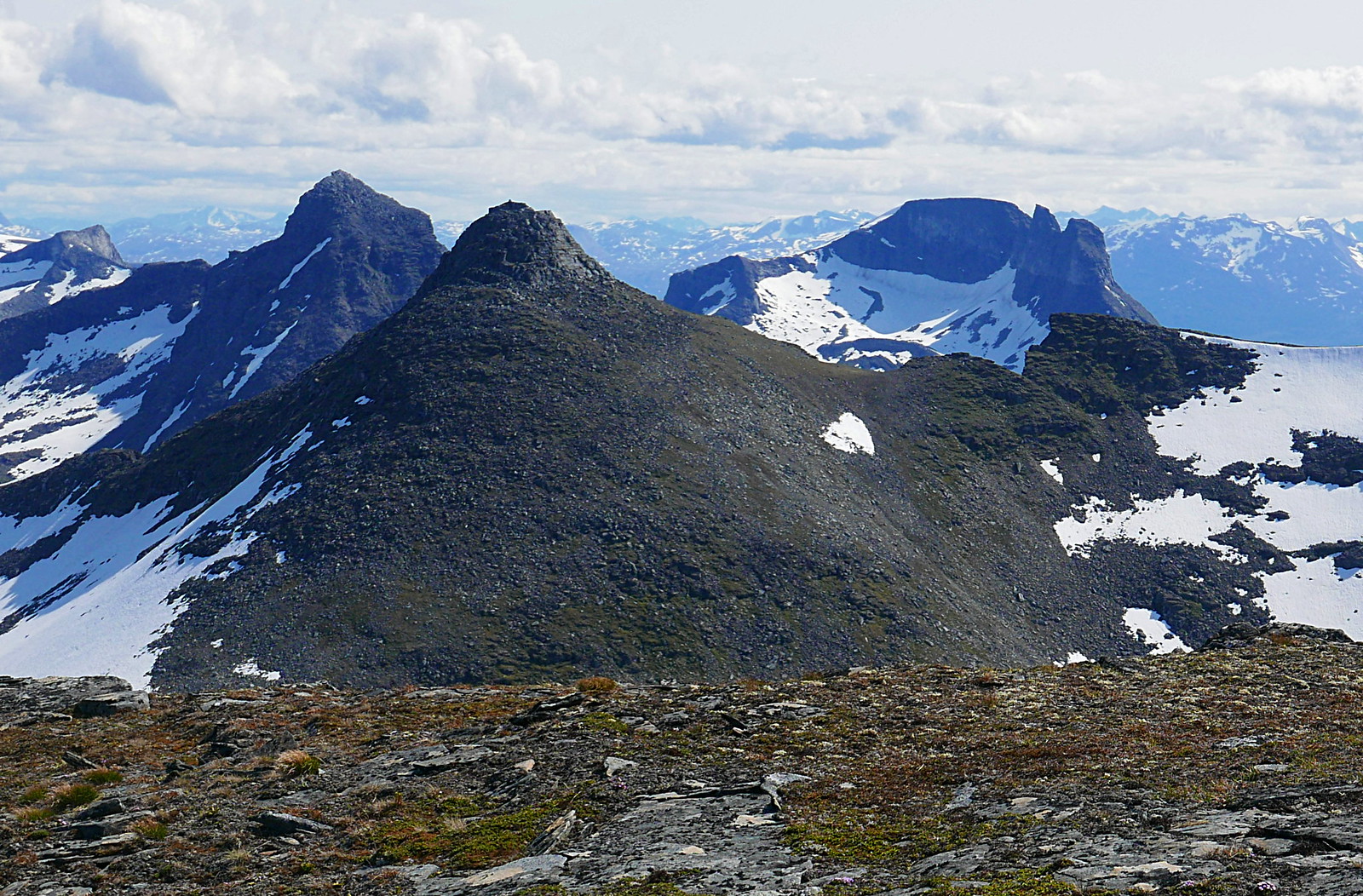 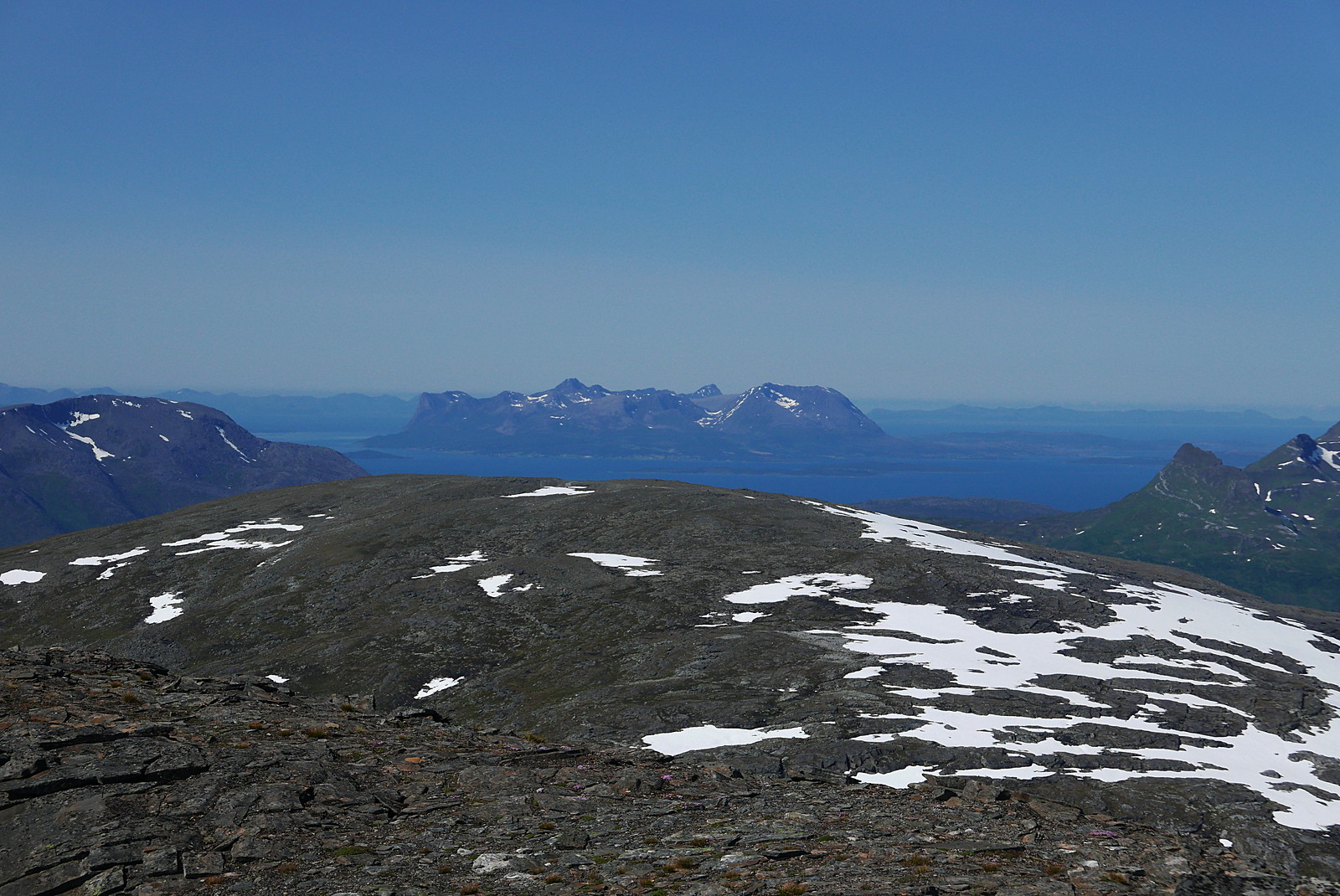 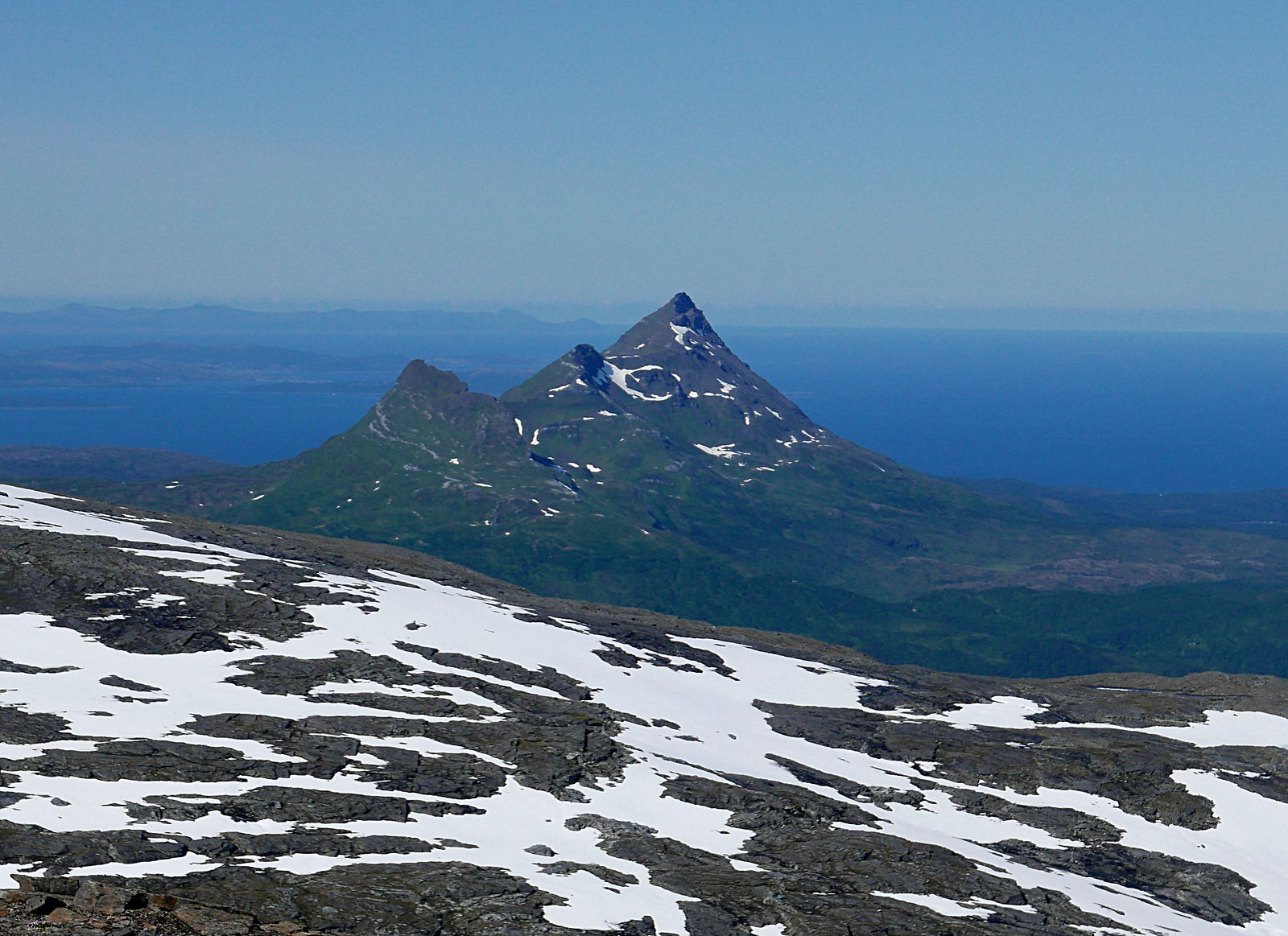 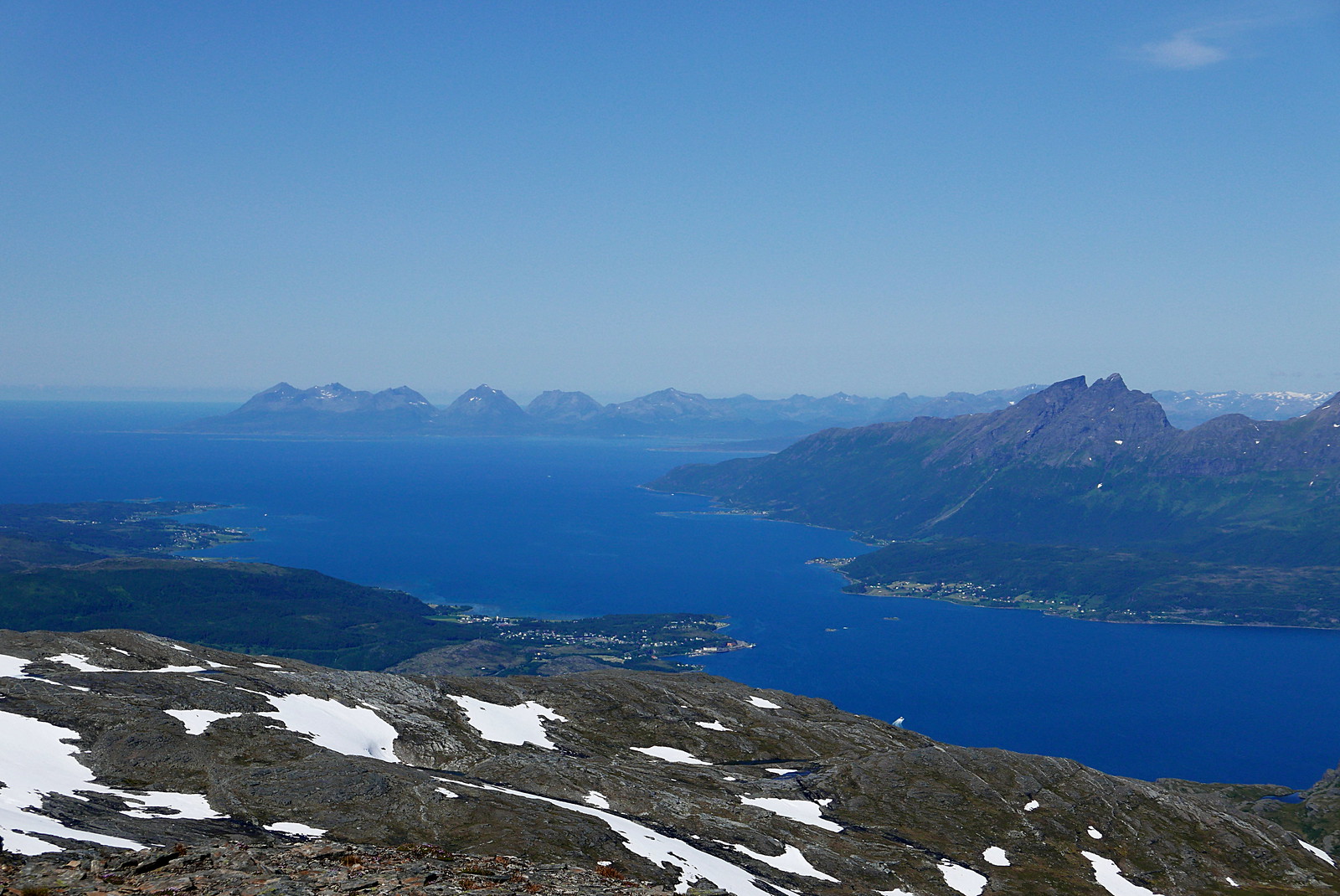 Senja (in the distance) 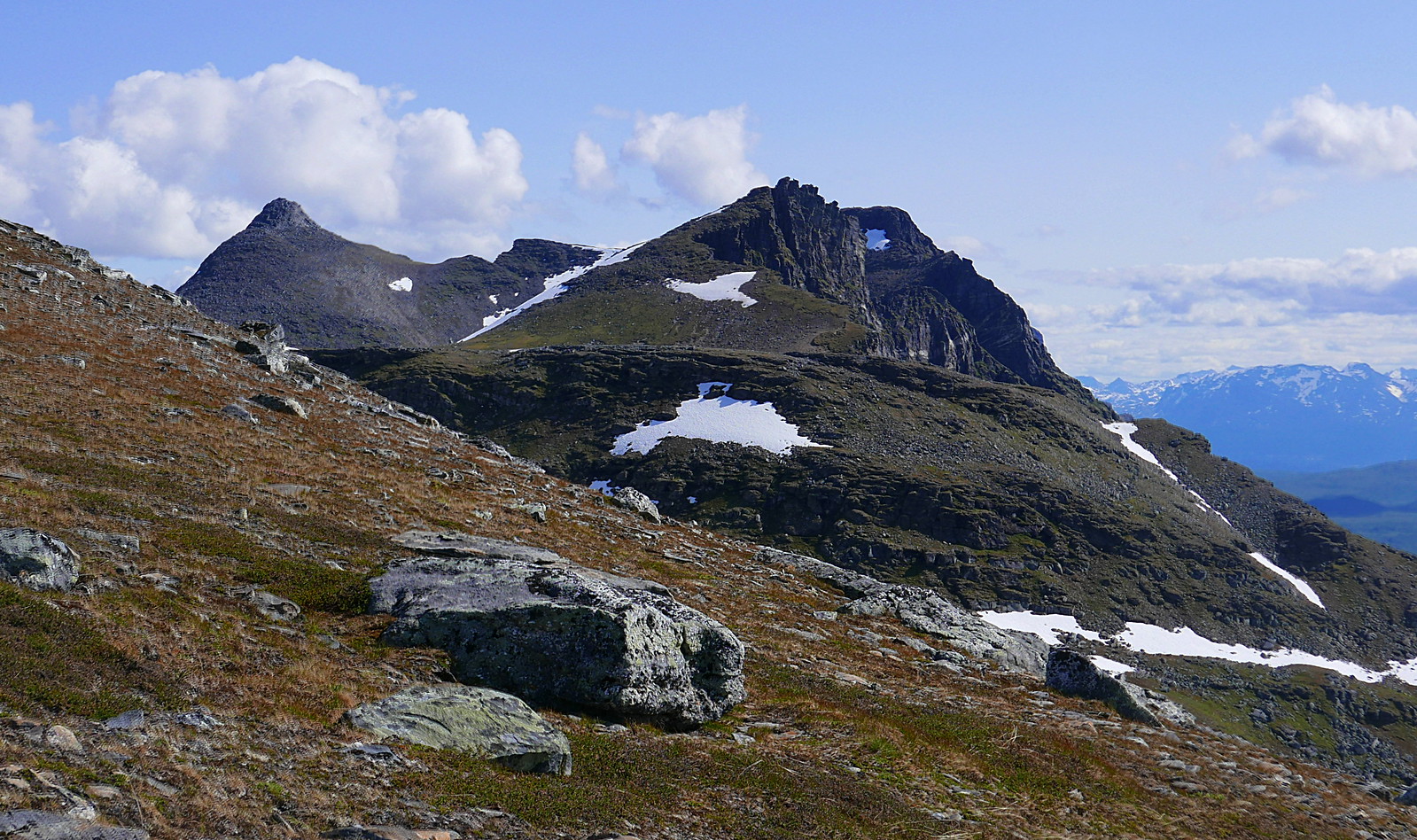 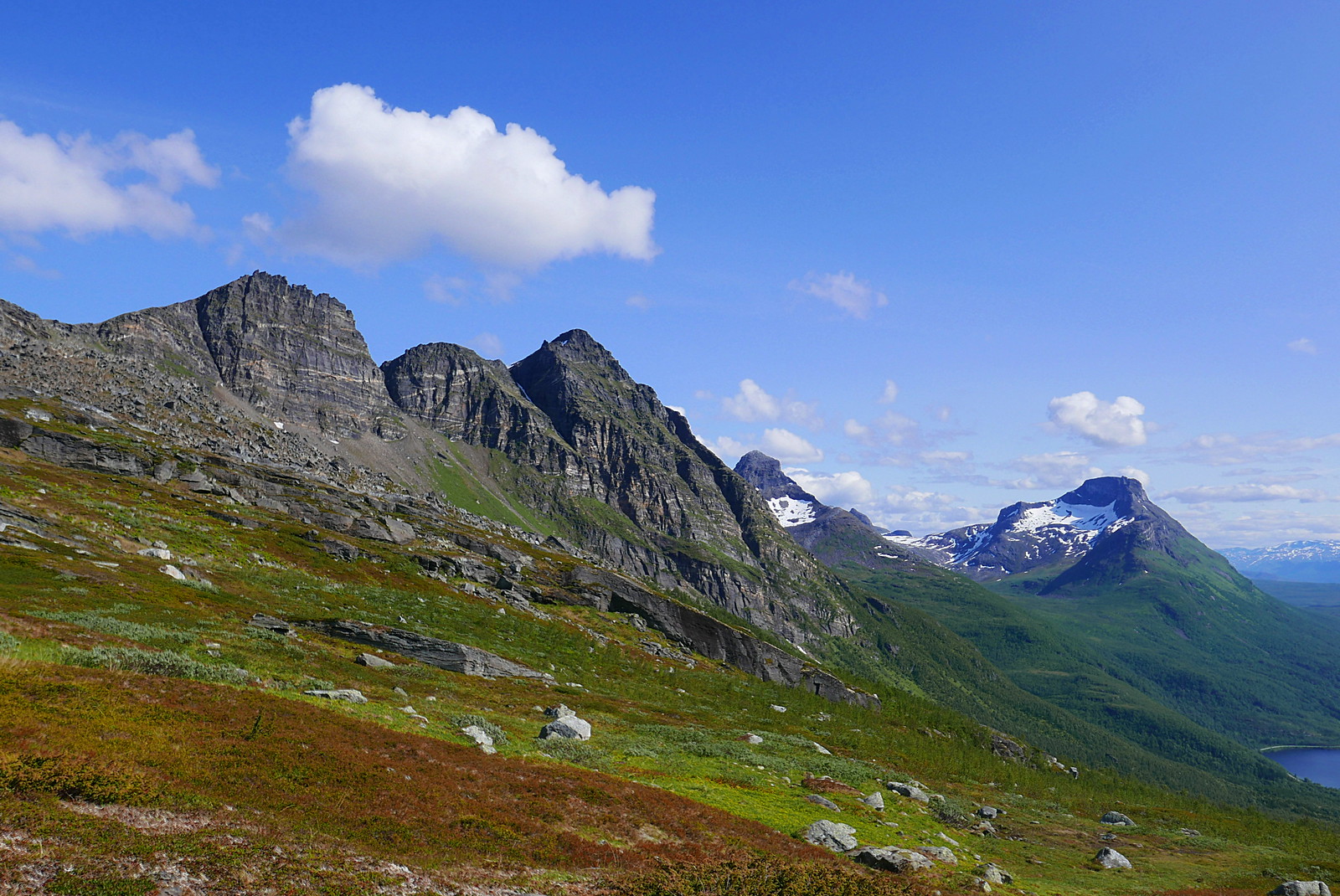 Could barely bring myself to read these reports, as I knew I would turn green with envy. Husband went to Norway as a 6th former in the late 50s and they trekked from hut to hut, so any suggestion that we go to Norway was met with "Why don't we go somewhere NEITHER of us has been?" So we kept on going to places neither of us had been....and very nice too. In fact it seems ungracious to keep saying "What about Norway?"


However, your reports make it seem beyond our now capabilities, so am very glad just to enjoy Norway vicariously. Thanks.

Sgurr wrote:However, your reports make it seem beyond our now capabilities, so am very glad just to enjoy Norway vicariously. Thanks.

You are very welcome! However, there are increasing numbers of shorter/easier walks being created in parts of Norway. Many local districts publish a tick list every year (often called Ti på Topp, which translates as Top Ten, but there are often more than ten!) of local walks which usually have a path (of some sort) and waymarking. These vary from very short and easy, though moderate hills, up to the slightly more challenging stuff that we tend to go for, with 1000m+ of ascent and maybe some easy scrambling: there's an example of such a list here: http://www.trimpoeng.no/i/30trimmen/uteposter/ (in Norwegian, but Google translate does a reasonable job).

So based on your recent trip reports, I think there would be no shortage of things for you to do and enjoy!

Thanks. Something to think about.

A feast for the eyes.
I have a wish list of Norwegian hills but I see I might have to extend it a bit! Probably will stay a wish list forever but I'd like to think I'll make it back there one day.

Good list! I do fancy another trip to Senja: have done some ice-climbing there but not any of the hills.