Having concentrated our efforts so far on the north side of Ofotfjorden, we decided on a change of scenery and took the E6 heading south-west from Narvik. Rånkeipen is a prominent peak overlooking the fjord, whereas its higher neighbours inland are more hidden from the road.

Finding the start of the route proved tricky: there are several plausible looking tracks but no signs here, despite the route being well waymarked higher up. Initially we set up off the wrong track, to be put kindly right by the occupant of one of the houses!

The route starts off as a tractor track winding up through the woods, before becoming a narrower path. There is a "postbox" higher up with a log book, and as the gradient levels out you pass a wooden sign at a junction. Keeping straight on, eventually the waymarking begins, pointing the way across the stream and up the hillside beyond. Now above the trees, the path makes a rising traverse across the hillside using a series of shelves. The ground is quite barren here, with various different coloured rocks - there must be some mineral content which discourages vegetation. Eventually the path reaches the main shoulder of the mountain, with fine views opening up to the west. The path climbs some steeper ground towards the summit, up a final bouldery section to the large summit cairn.

We were blessed again with superb views from the top, and spend some time over our sandwiches. There is a dramatic drop on the north side of the summit: if you wander a little way along the edge, you realise you have actually been standing on a two-metre thick slab of rock with thin air beneath it!

We returned by the same route, having an interesting chat with a local couple on the way down, and then meeting an amazing older man who appeared to have fused knee but was making remarkable progress on two crutches! 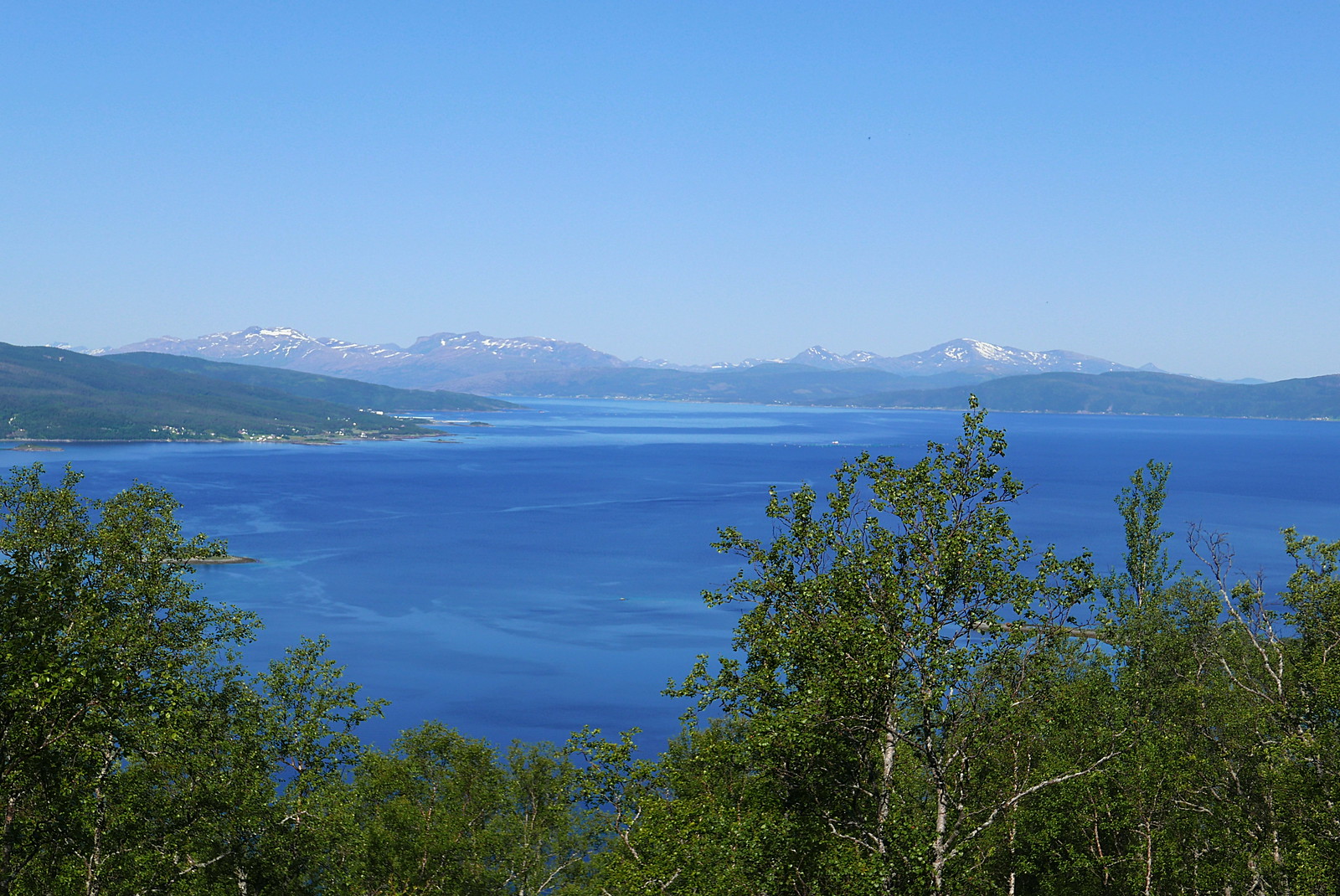 Early views across the fjord 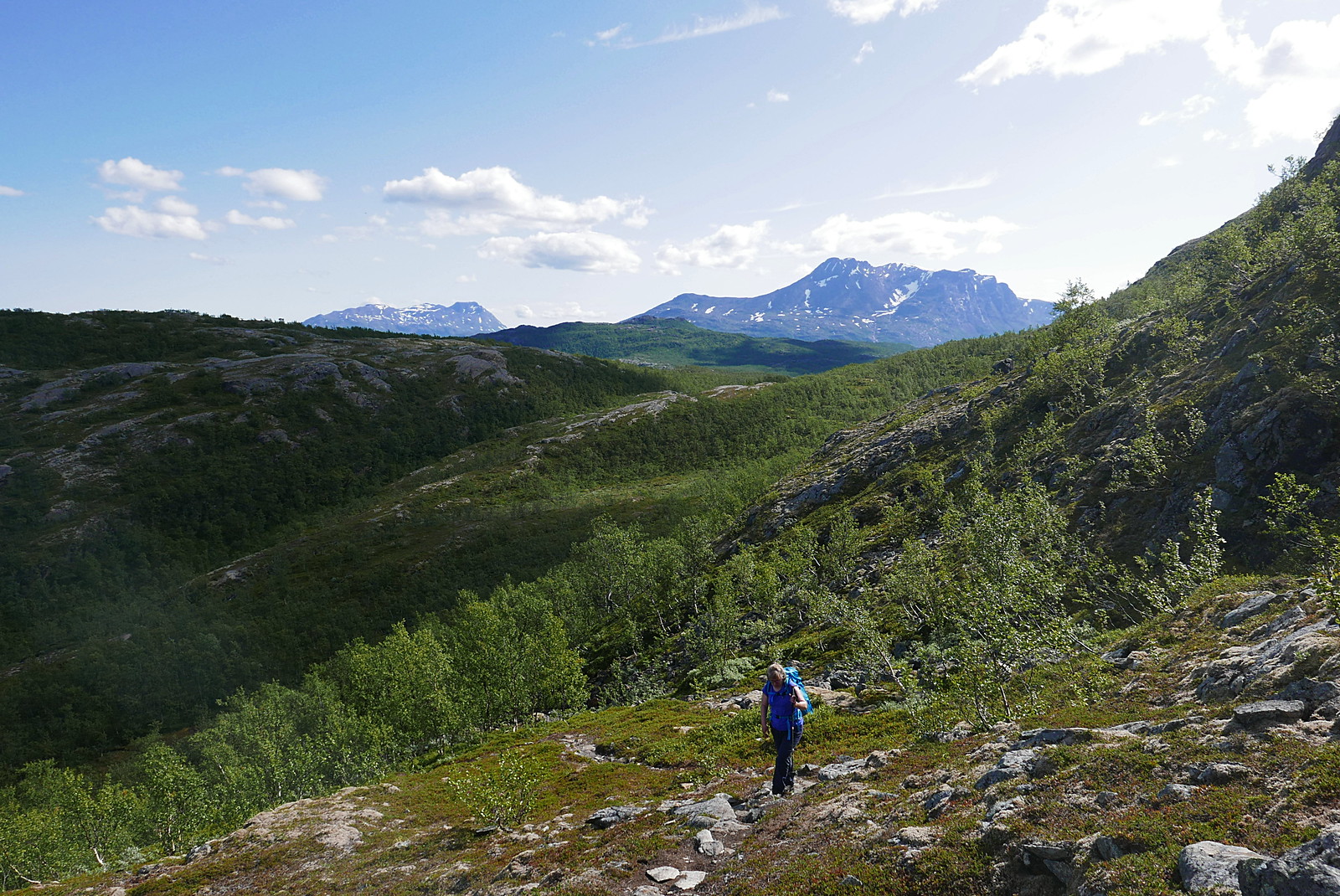 At the top of the trees 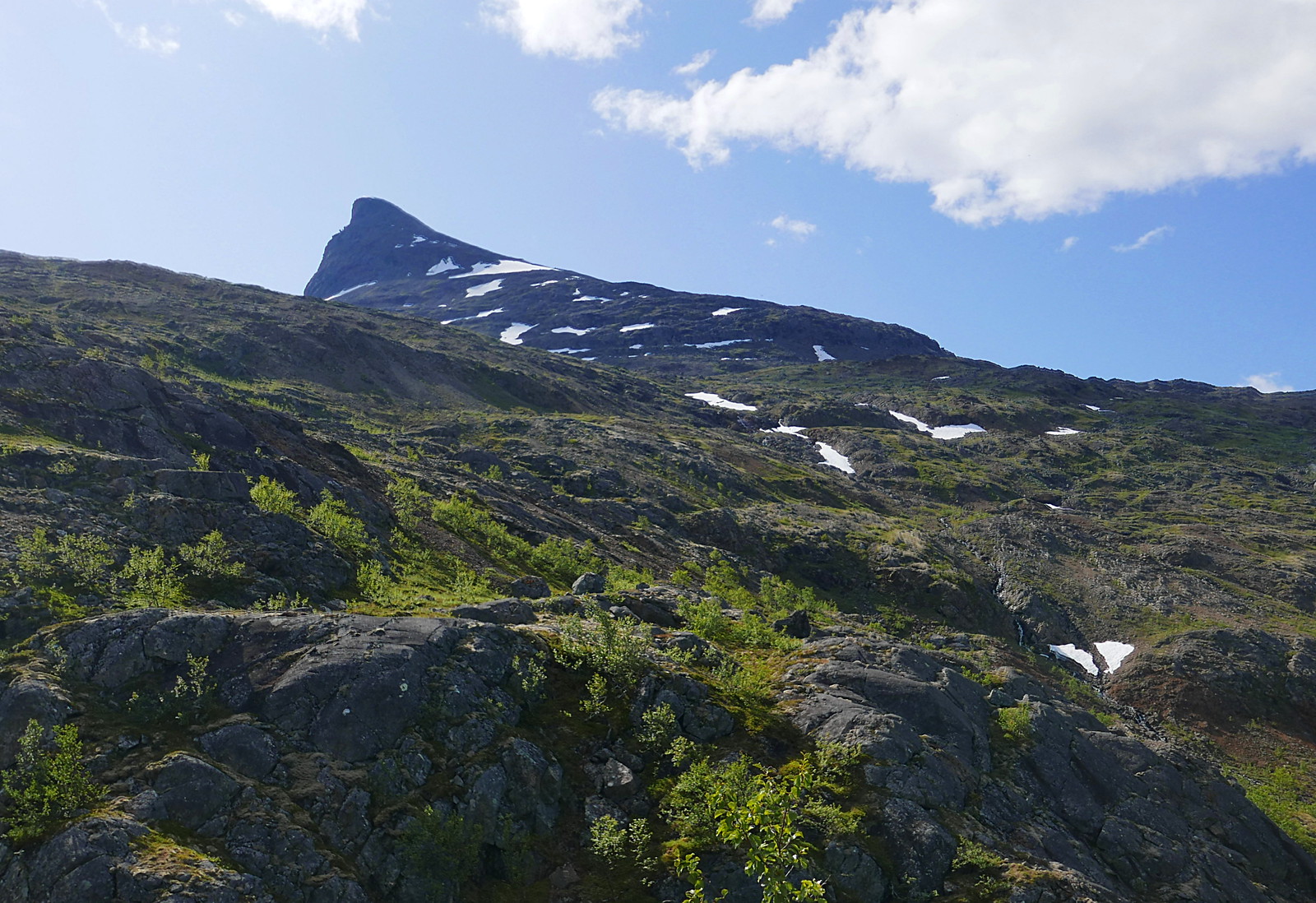 Looking up to the summit: the route joins and then follows the right-hand skyline 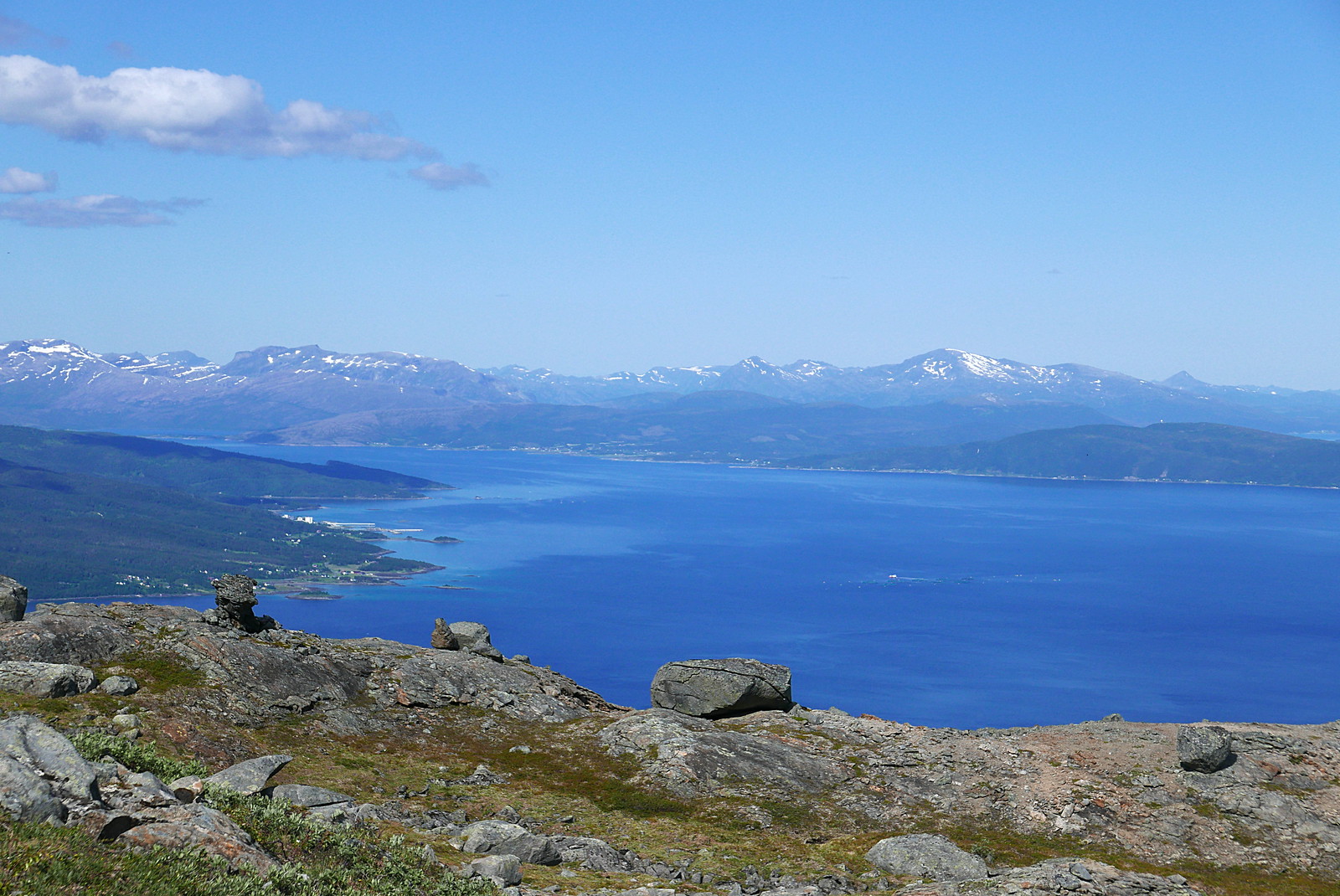 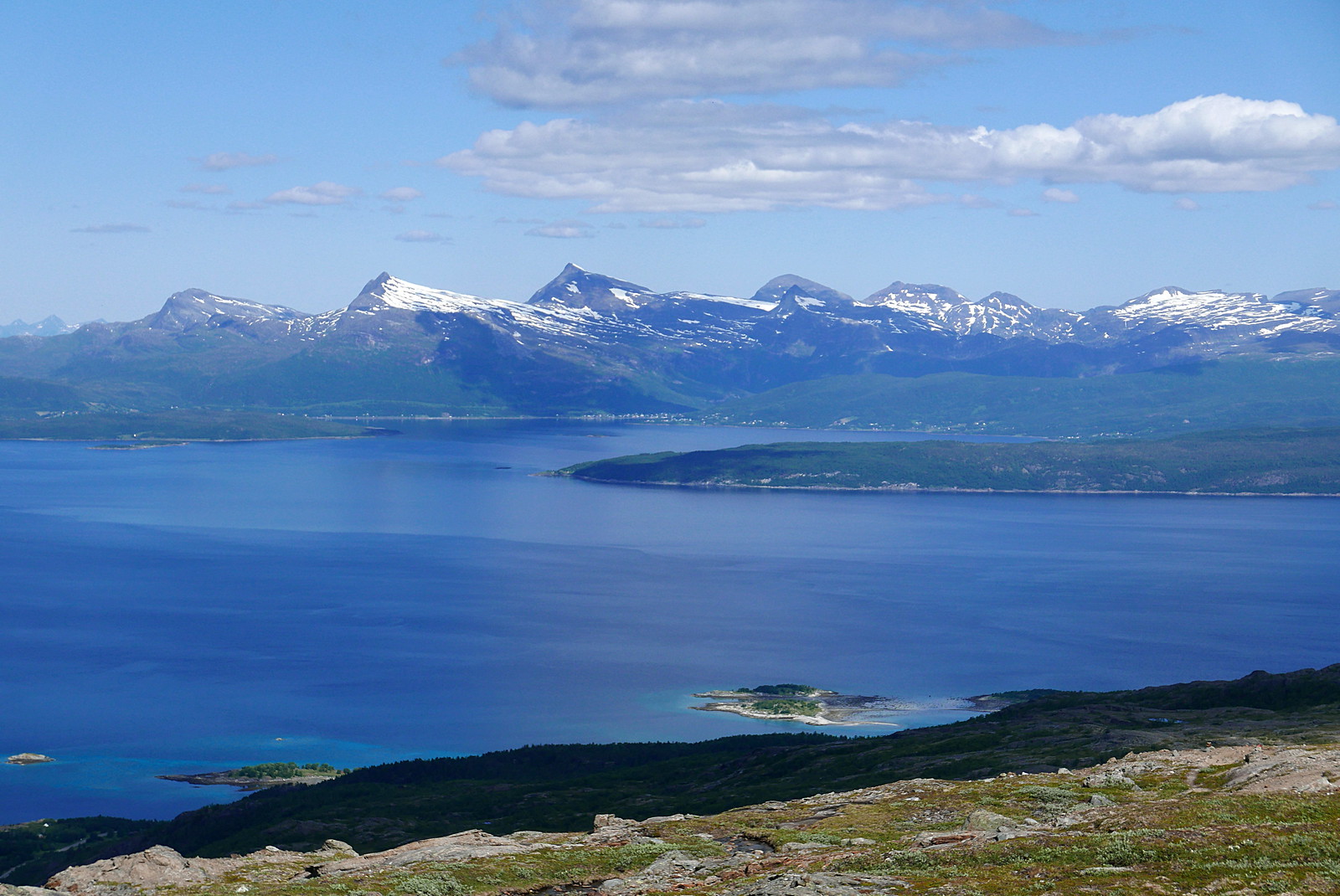 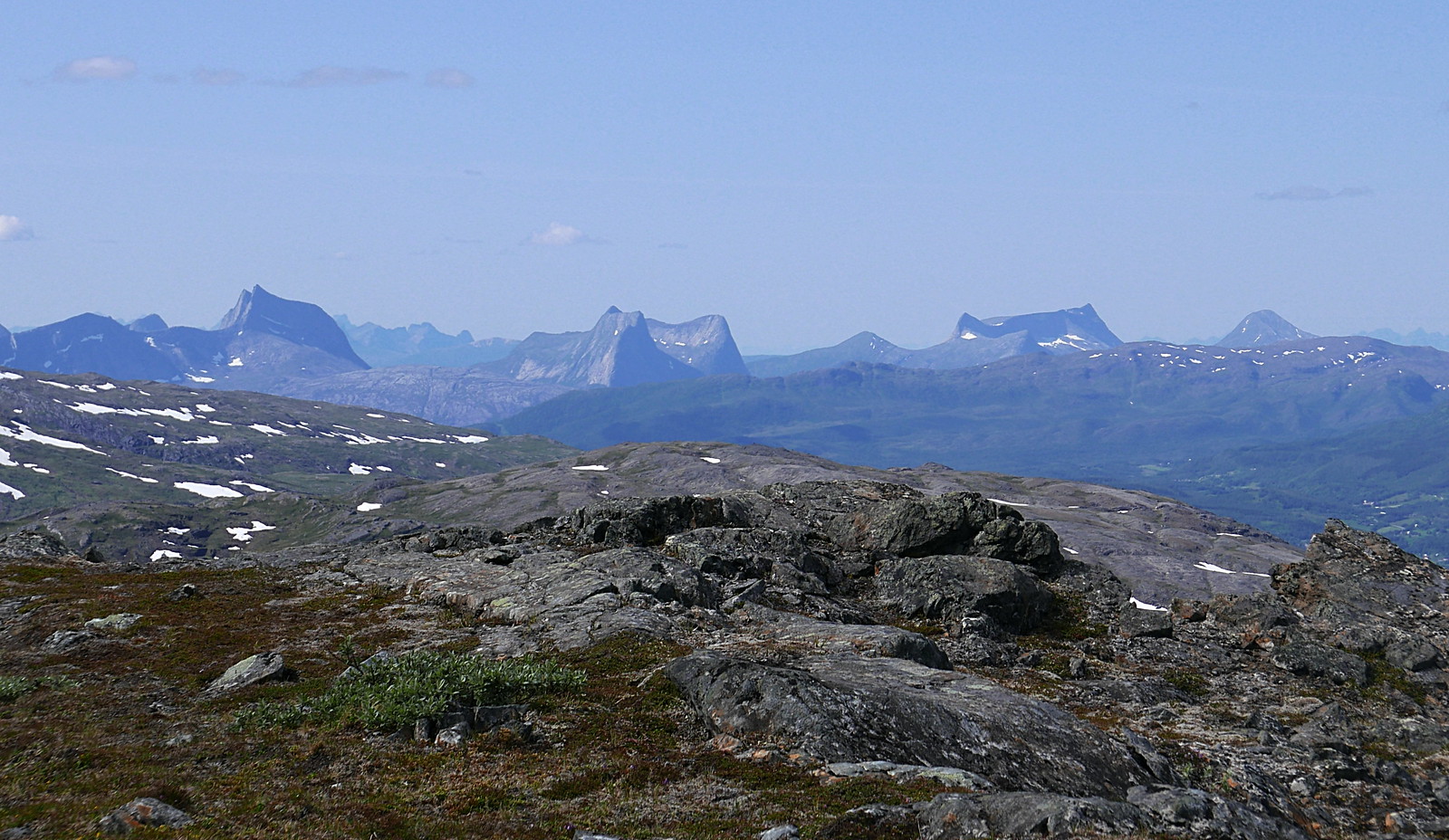 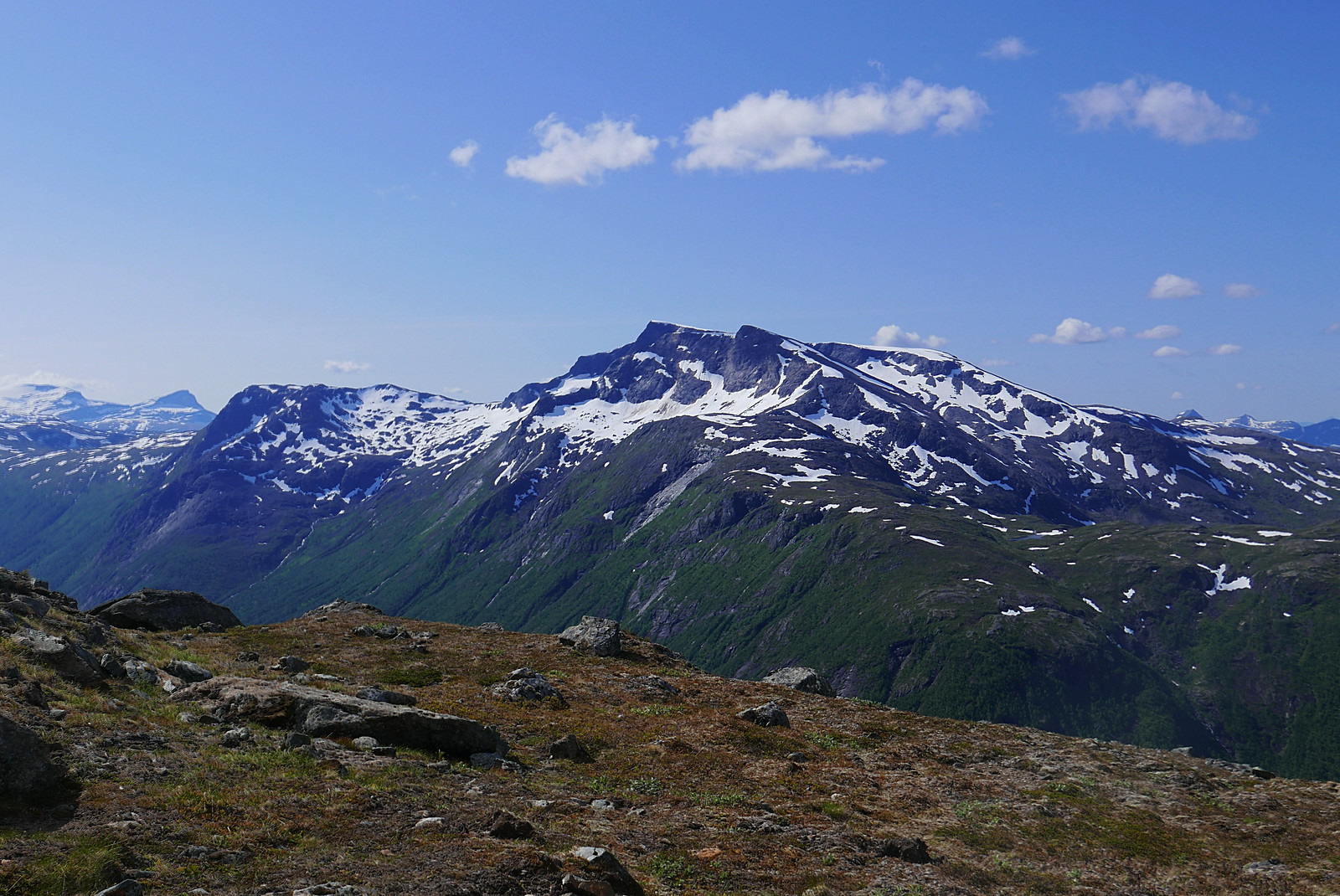 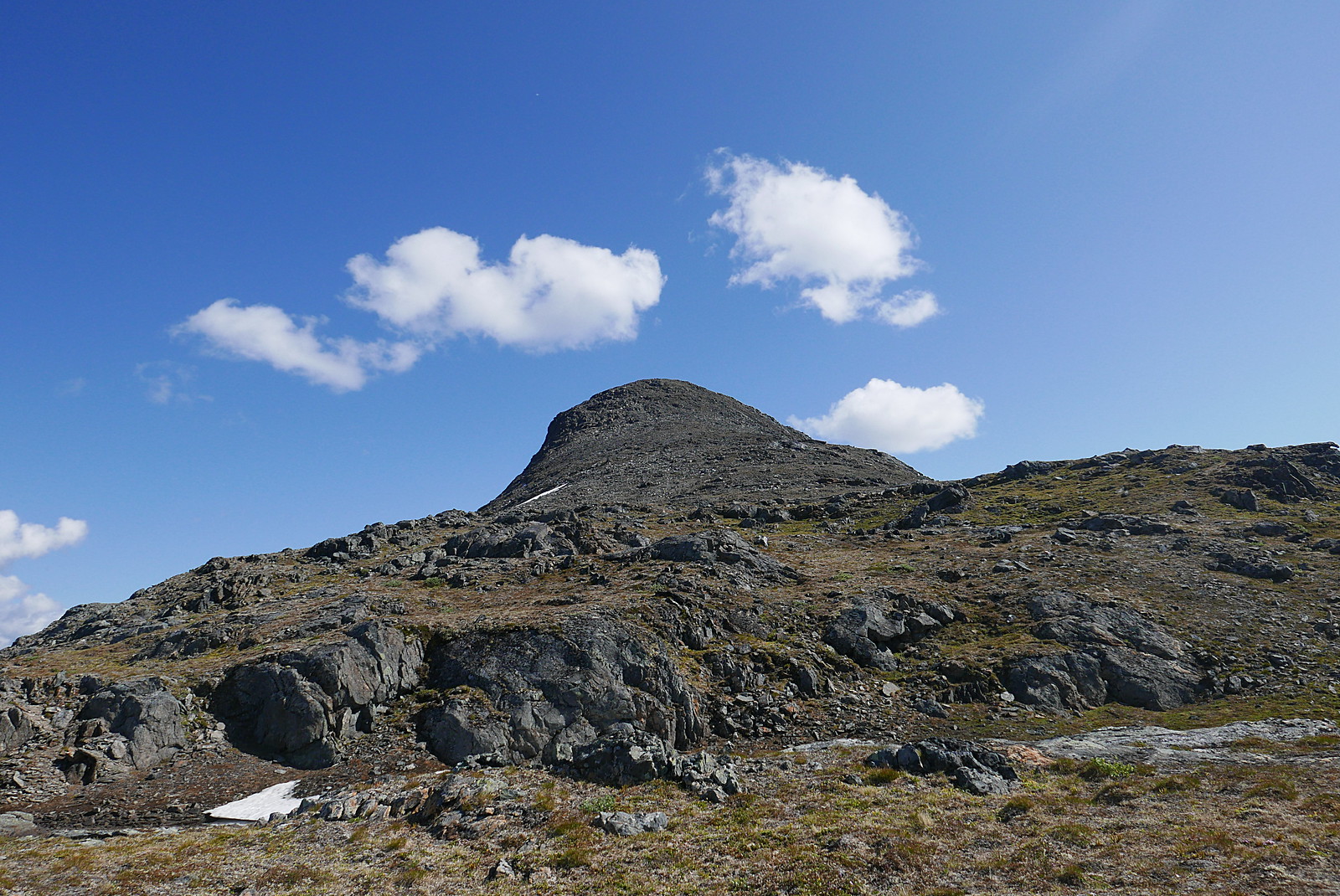 Last section to the summit 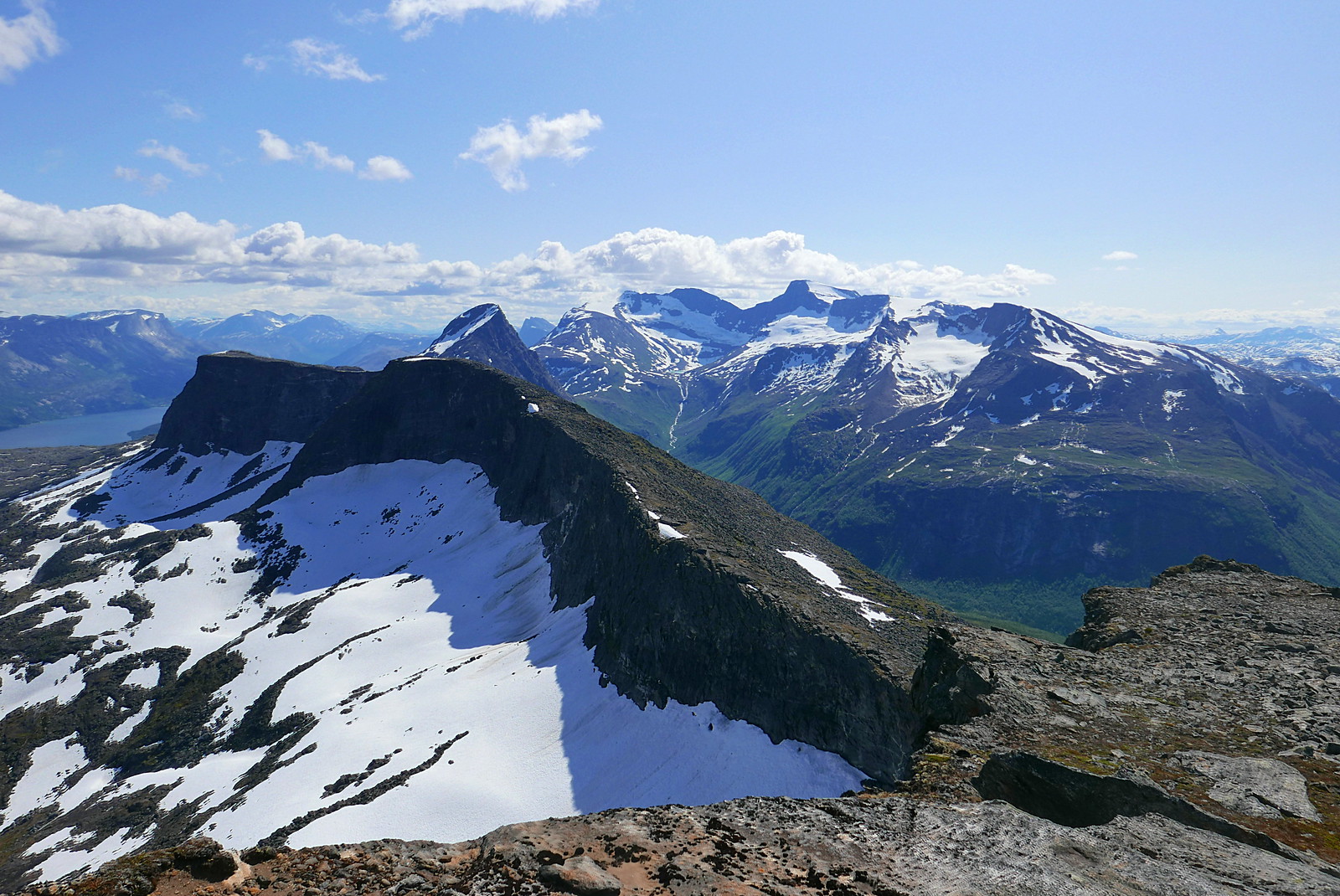 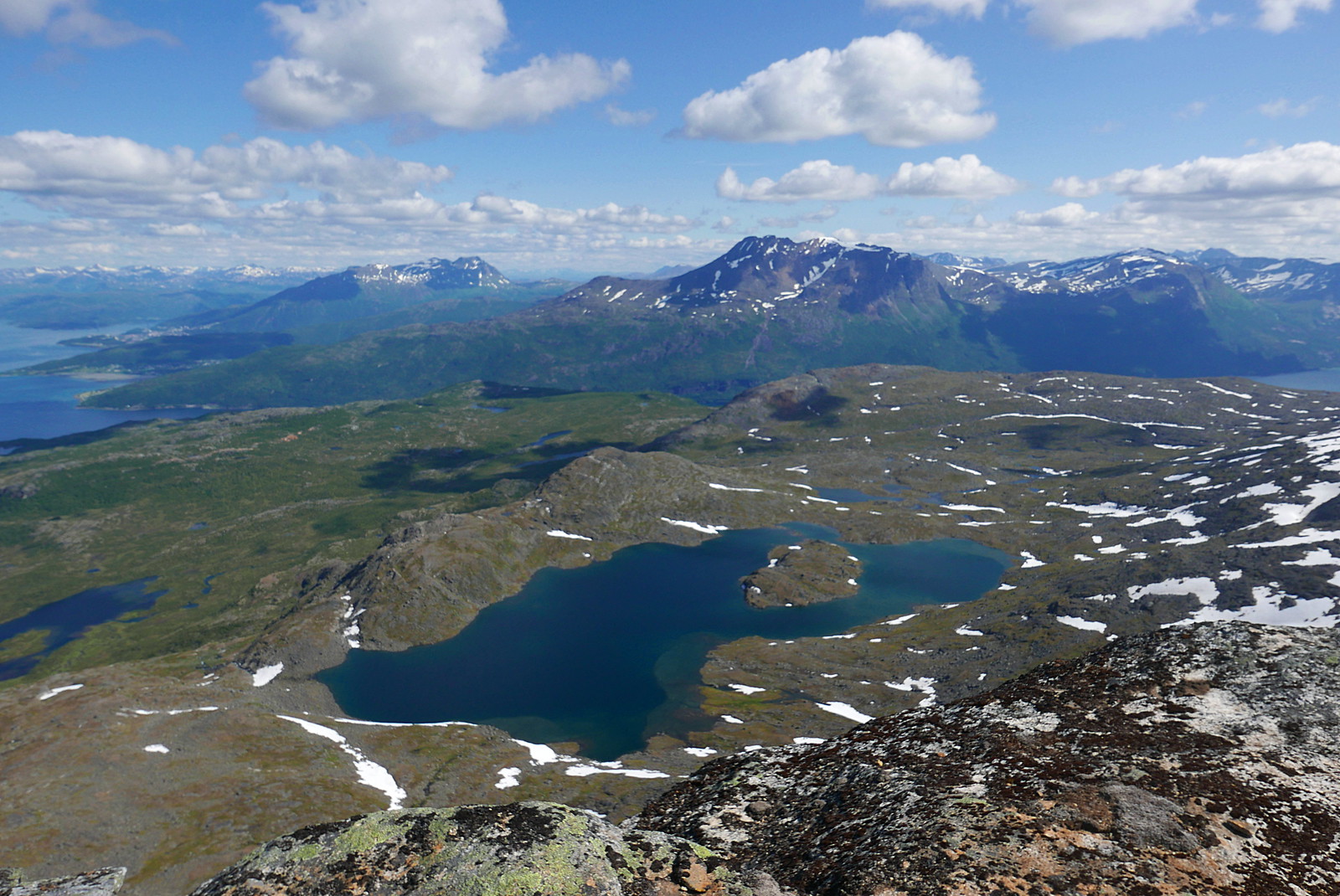 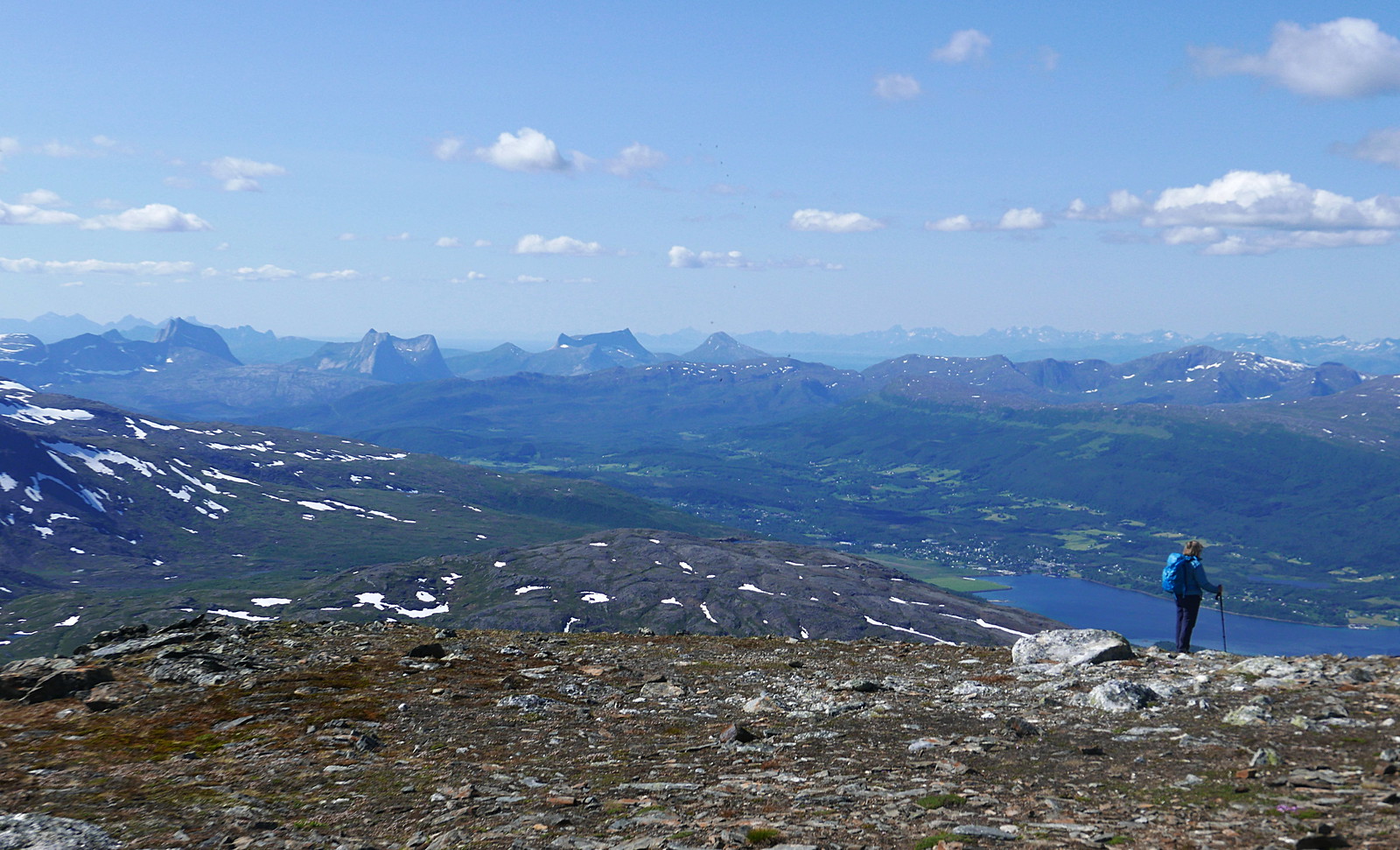