This is an account of the trekking part of a week's holiday based in Monachil, a small hill town, 8km east of Granada. The nearest suitable airport is at Malaga 145km to the SW on good roads. Monachil lies in the western foothills of the Sierra Nevada and allows easy access to a variety of trekking routes both direct from the village or via relatively short drives. There is a regular bus service to Granada.

This is a good introductory walk which starts at the east end of the village with several hanging bridges, a tunnel and a dramatic gorge through which runs an irrigation channel. There is not much headroom in sections of the gorge due to the rock walls bulging over the river. There are metal staples in several places to assist passage. The route leaves the gorge after about 5km and winds uphill on a good track over a shoulder and then descends past some farms. The Sierra Nevada road is soon joined which leads past a restaurant and back into Monachil. 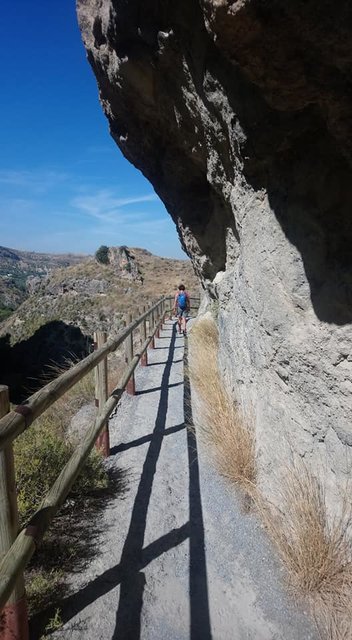 Optional walkway off the main trail leading to viewpoint. 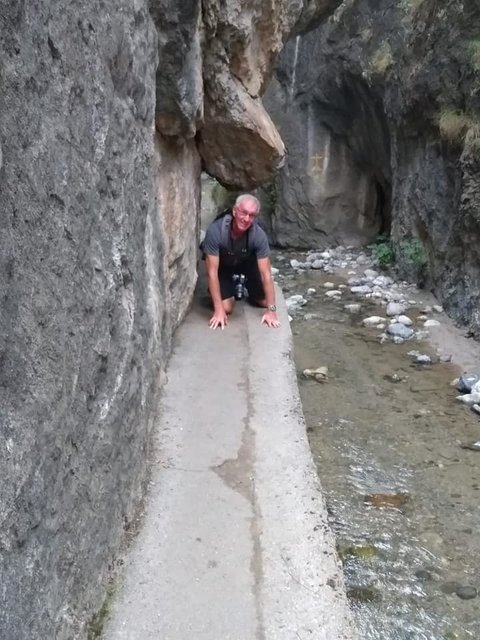 The walk starts from the Barranco de San Juan, upriver from the village of Güéjar Sierra, along the route of the old Sierra Nevada tram. Just driving to the trailhead itself down into the steep valley of the Genil river beyond Güéjar Sierra is a bit of a challenge along narrow twisting roads perched above the gorge and then a series of dark narrow tunnels and bridges to negotiate before eventually arriving at the car park. This route involves a fair amount of climbing and we found it hard going in the heat but it sticks to good paths and is relatively easy to follow. However, the guide articles rave about this circular walk and the views to Mulhacein, but to be honest about 40% of it is a bit of a trudge especially the 2nd and final quarter stages. Also the various descriptions state that it's from 15 - 16 km long whereas in fact it's nearly 18km! 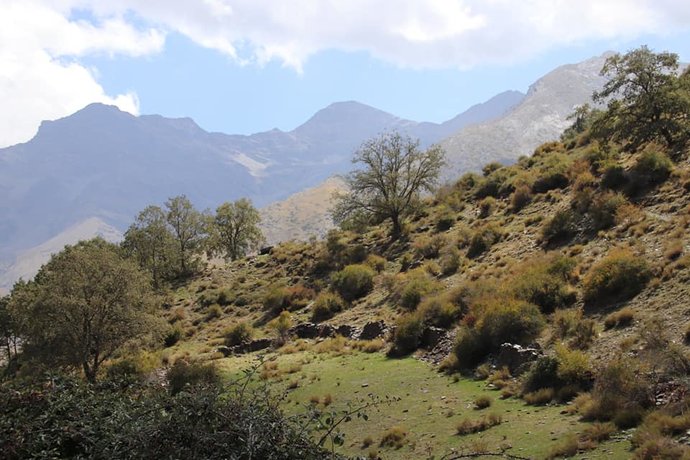 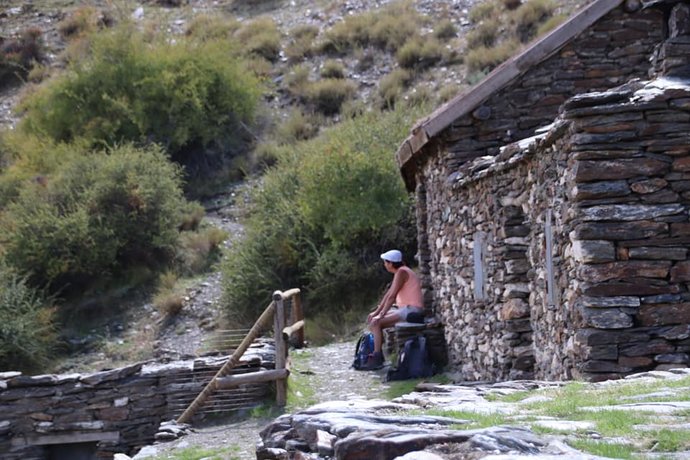 This trail winds up through a forest on a good track with several turn-offs following a sturdy new fence, before traversing the hillside high above the Genil River (this was the least interesting part of the walk) before arriving at the Cortijo del Hornillo, an old summer farm in the mountains. We had to negotiate herds of cattle strung out along the narrow path as we neared the farm, some of them with pretty menacing looking horns! The path became indistinct here and it's easy to traverse lower than intended but we came across several signposts directing us uphill to the Cortijo. The views suddenly open out here of the highest peaks of the Sierra Nevada which look awesome. Beyond the buildings the trail descends steeply through a dark forest passing at one point an impressive rock spur viewpoint. As we descended groups of wild boar scuttled away below us. Emerging from the forest the track joins the Vereda de la Estrella cut into the south side of the gorge again at a viewpoint. This last 6km or so back westwards is impressively perched above the river with another viewpoint of the high peaks. 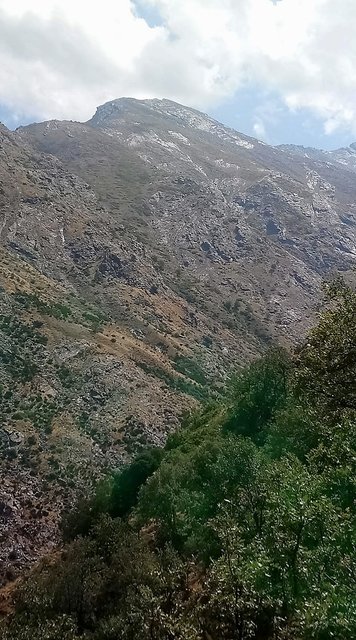 We drove 10km or so roughly south via the outskirts of La Zubia to the Canal de la Espartera nature area and parking lot from where a number of trails lead off into the Cumbres Verdes. We were headed on a 10km out and back trek to Cerro del Trevenque, a 2083m peak with a steep and serrated summit ridge. The geology in this area is mostly limestone which makes for very broken and gravel walking. Trevenque looks impressive and is graded moderate by most guides which downplay the difficulties but I had heard this was undergraded since the final 150m or so has become severely eroded. 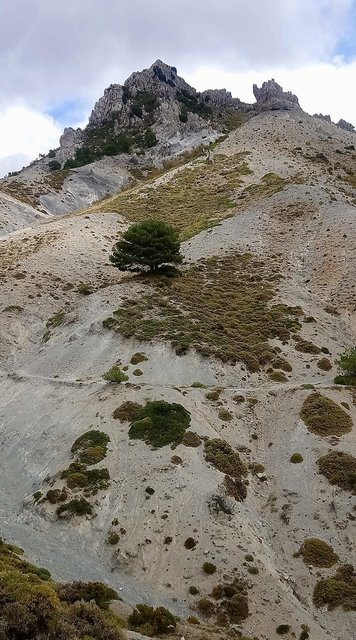 The serrated summit showing the steep and eroded approach. 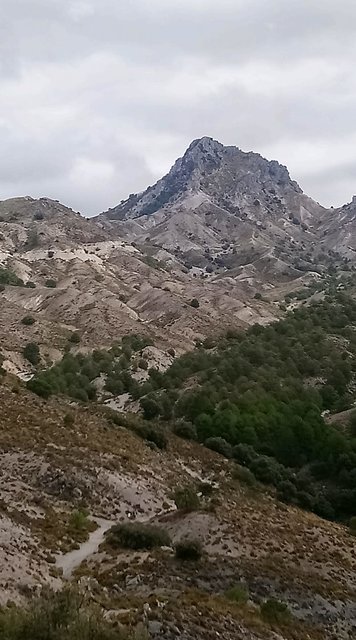 Trevenque from the approach trail.

We climbed gradually on well signposted trails for the first 2km until reaching a junction at a Mirador with views of the peak and another trail continuing down the valley. We headed off left on a broad rising ridge which approached the peak from the west. Generally the path was about a metre wide but in many places at gullies the path had been washed away or badly eroded. There were two couples ahead of us one of whom had overtaken us. About 300m out from the summit a steep broken ridge rose up before us with the path clearly snaking up this and through a series of nasty looking gravel gullies. We stopped for some lunch and to spectate how the others tackled this. The lead couple who had overtaken us took quite a time to surmount the loose disjointed gullies and stopped several times. Eventually they succeeded and entered from a distance what looked like a smooth slot-like path above. As they did so another couple appeared from above them and began to descend. In the meantime,the second couple below had started up the first shallow gully but after a few minutes began to retreat.

With some trepidation we continued up to the retreating couple and the base of the first chute. They looked alarmed and said it was too dangerous to continue up the loose broken gravel with smooth slippery rock beneath. What made it worse was the friable rock on either side which broke off and offered no real handholds. Looking up this gully I was inclined to agree, but then the first couple had made it albeit with difficulty. The couple who were descending above had now stopped on a sloping ledge between the 2nd and 3rd gully about 30m above us. We decided to give it a go and after a lot of backsliding, expletives and some unconventional moves we made it to the narrow smooth rock slot. Some of the gullies had been swept clear of gravel which made for some tricky friction moves. We stopped to catch our breath and watched the quartet descend with difficulty below us. I said to Glenys that these gullies might actually be easier to descend because you could do a controlled slide or tread the gravel a bit like scree running.

The way now led steeply upwards from left to right along a narrow ridge and then across a broken terraced slope towards the summit rock towers which appeared to bar the way. To our surprise we came across the first couple sitting on one of these terraces. They looked to be holding a council meeting after the difficulties encountered below. We left them. From here the final rock towers looked to involve climbing rather than scrambling but the path led to a stepped break in the rock band which actually crossed the summit ridge and hence easy access to the summit itself. We were exhilarated to have made it. We briefly considered going down the other side of the mountain onto the SE ridge but the broken slopes below were terribly loose and steep so we just reversed our ascent route. I wouldn't recommend crossing the mountain and down the SE ridge without a guide or prior knowledge. The descent proved easier than expected and as I guessed we treaded down the gravel chutes. On our way back we caught up with yet another couple who had retreated from the gravel chutes while we were on the summit. The serious nature and loose ground conditions of the last 200m or so is overlooked or downplayed in almost all the online descriptions. I would rate this climb as Difficult not Moderate.

We had intended to link all the major summits, including, Pico de Carne (1809m), Cerro Gordo (1889m) and Cerro Huenes (1802m) in a big circular walk from Monachil but ended up doing a lower route because of the heat and forest cover. We took a signposted trail south from the centre of Monachil which was in the shade for the first 2km or so before it broke out onto high olive groves and vineyards. Here we encountered a surprising number of trails far more than expected. Even my GPS didn't show them all. Eventually after a few diversions we picked up the narrow sendero leading up Cerro Huenes. This day was very hot 30 deg and we were suffering from a late night plus we entered thick forest again. By the time we had slogged up to the Fuente Fria we decided to traverse south on the path rather than continue uphill. After 6km or so this brought us to the Canal de la Espartera car park where we had been a few days before. After some refreshments we took various paths north past the Cumbres Verdes resort and joined a vehicle track on the plateau above the escarpment that we had seen earlier across the valley from the Huenes path. In 4km this led through the unexpectedly built up village of Los Llanos with two hotels and so back to Monachil.

Looks great. The Sierra Nevada range is near the top of my to do list. What's the public transport like in this area? I was looking for bus services from Granada to the ski resort but struggled to find anything.

Hi. The public transport in this area is good but mainly centred on Granada. There is not really a central bus station but various termini from where the buses operate. I think there are services beyond Guejar Sierra and Trevelez to the ski resorts.