Rombakstøtta, also know by the locals as Tøttatoppen, is very much Narvik's mountain: it's not the highest of the group of hills that overlook the city, but it's certainly the most eyecatching. We had a superb view of it across the fjord from our rented holiday cabin, and our next door neighbours, a lovely retired local couple, kept asking if we had climbed it yet, so we just had to give it a go!

The route starts from a car park at the Taraldsvik waterworks, and follows a wide track to a lovely little lake (Førstevannet) with a dramatic view of the summit, that looks completely impossible from this direction. From here, there a well worn path contours the hillside with increasingly fine views, leading to another lake, but before you reach that, there is a branch off to the right which climbs through the woods, and then rounds the hillside above. The path then follows a line of pylons across the outflow from a pair of lakes, and then crosses another stream through increasingly rocky ground to a knoll overlooking the impressive corrie containing Isvatnet. The route now continues through a chaos of boulders, first downhill and then up the other side. Beyond the boulders there is a wide shelf composed of huge slabs: the hillside ahead looks impregnable, but the path makes a long rising traverse to meet the skyline ridge well to the east of the summit.

Here the terrain becomes entirely composed of rock, and there are several very deep cracks in the broad ridge: at some point in the future a large chunk of hillside could be heading for the fjord! The ridge to the summit has a series of steps, each of which has to be turned by some scrambling on the left hand side, but none of them are really exposed. The first step is quite easy (Grade 1), the second is the hardest (Grade 2/3) with some awkward moves up a corner crack, and the last, immediately below the summit block, soon eases after an initial big step up (Grade 1/2).

The summit is in a spectacular position, right on the edge of a dizzying drop down to the railway and fjord over 1000m below. The weather had turned rather cloudy, and on the way down, just after we had reversed the scrambling sections, we were caught in a shower. This turned the slabby shelf really slippery, so we edged down it very carefully. By the time we reached the boulder chaos, the rocks had started to dry out a bit: as we descended further the sun came out again, and we made it back to the car just before another heavy shower came through. 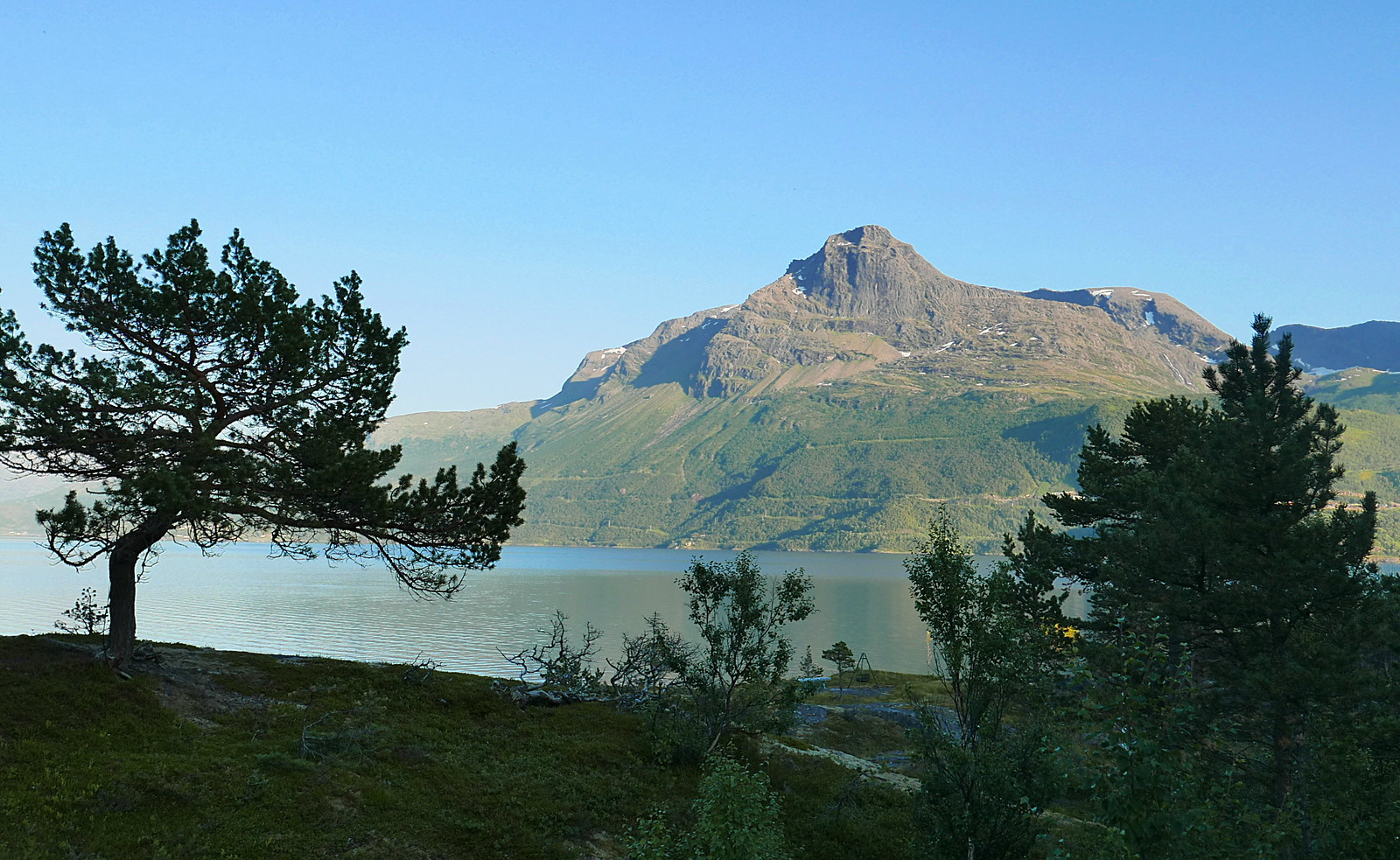 Rombakstøtta from our holiday cabin 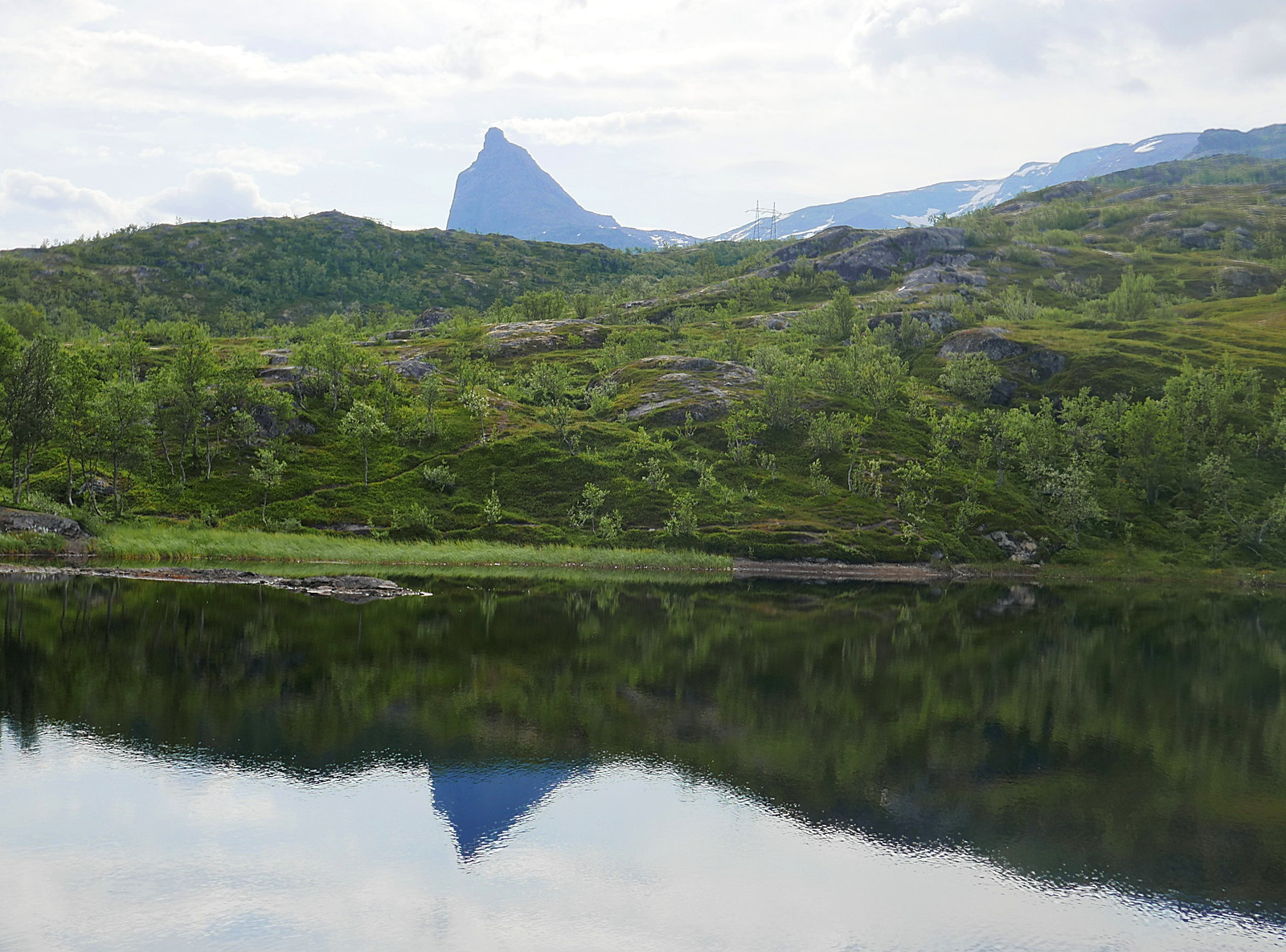 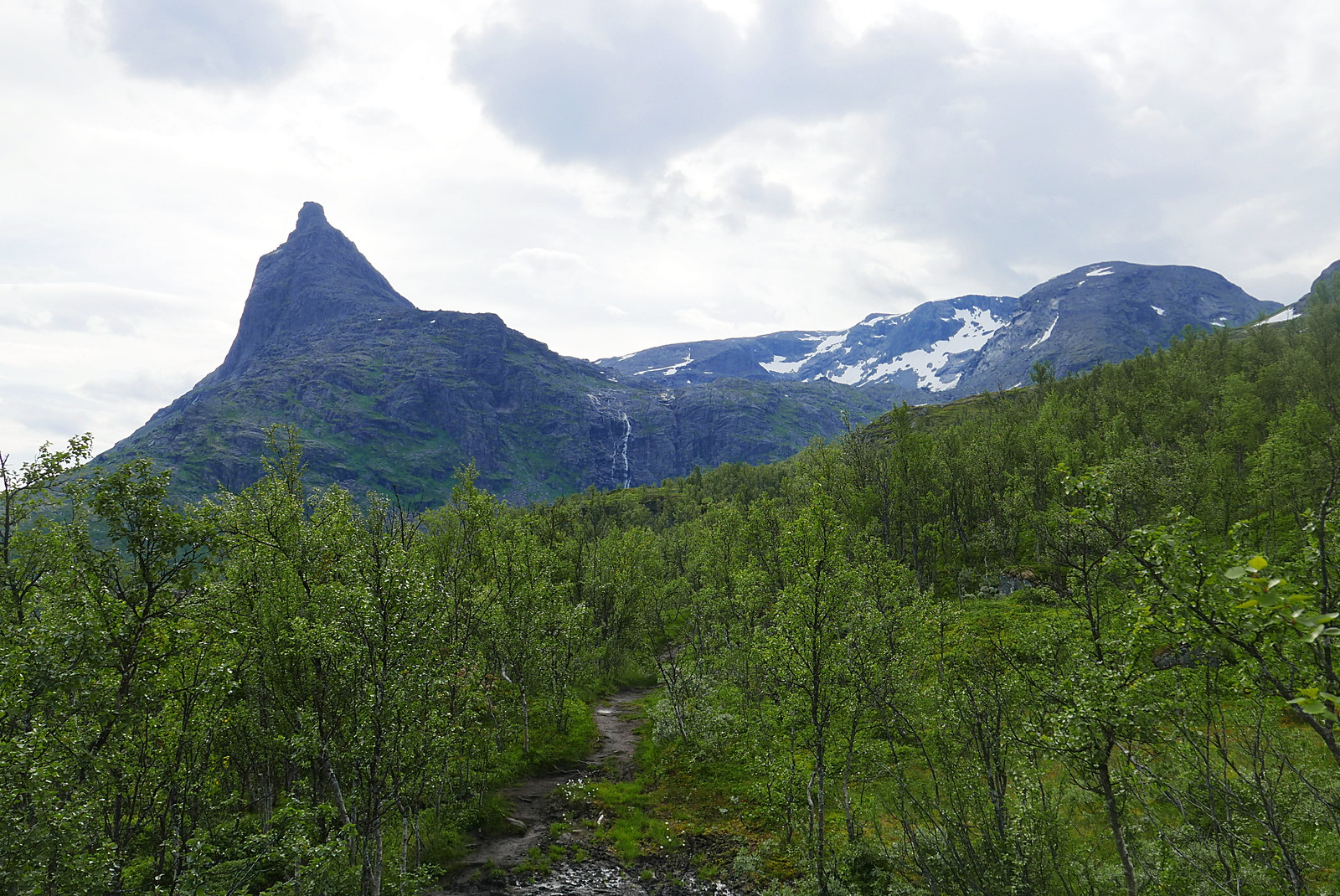 Heading up through woods 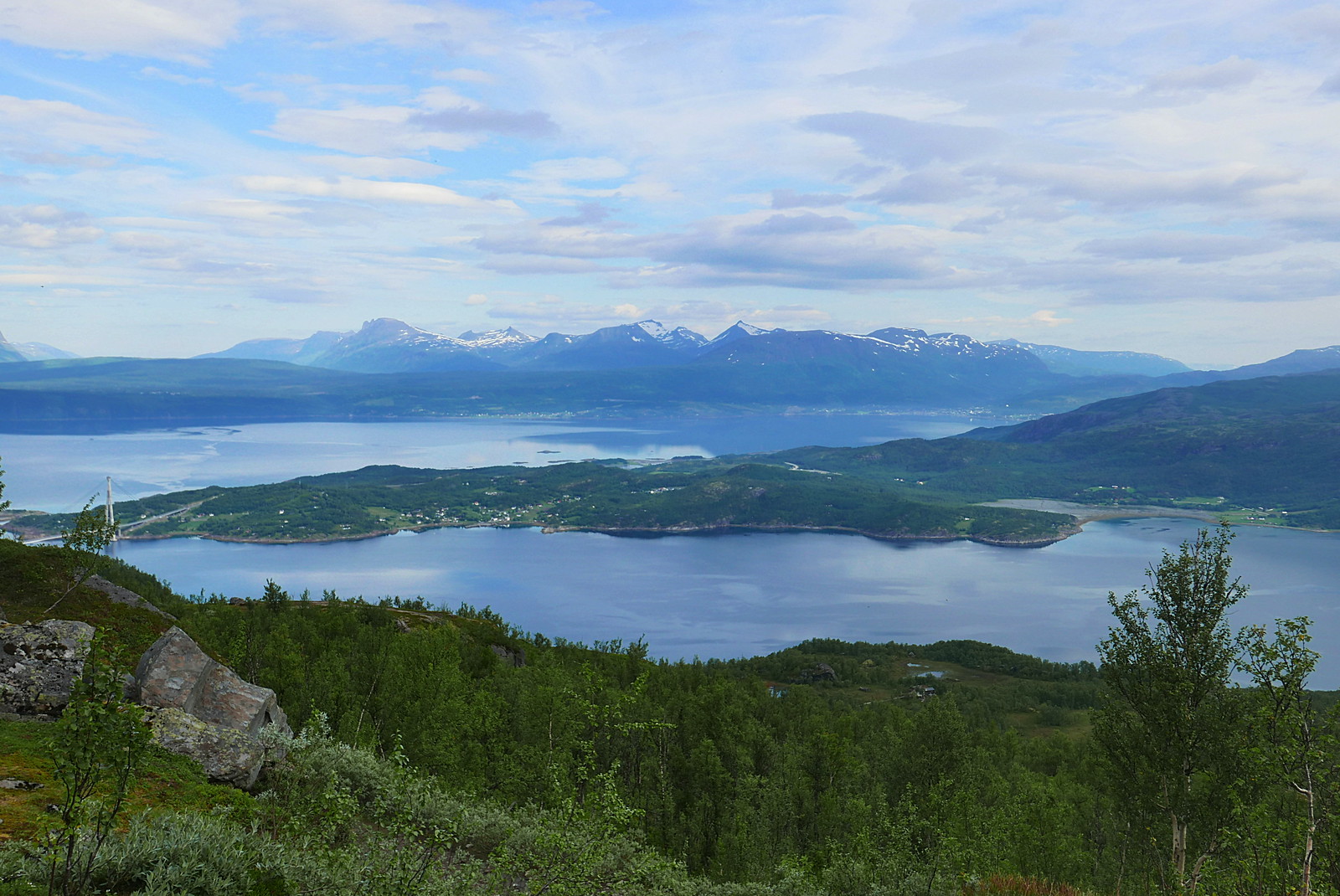 Views to the north 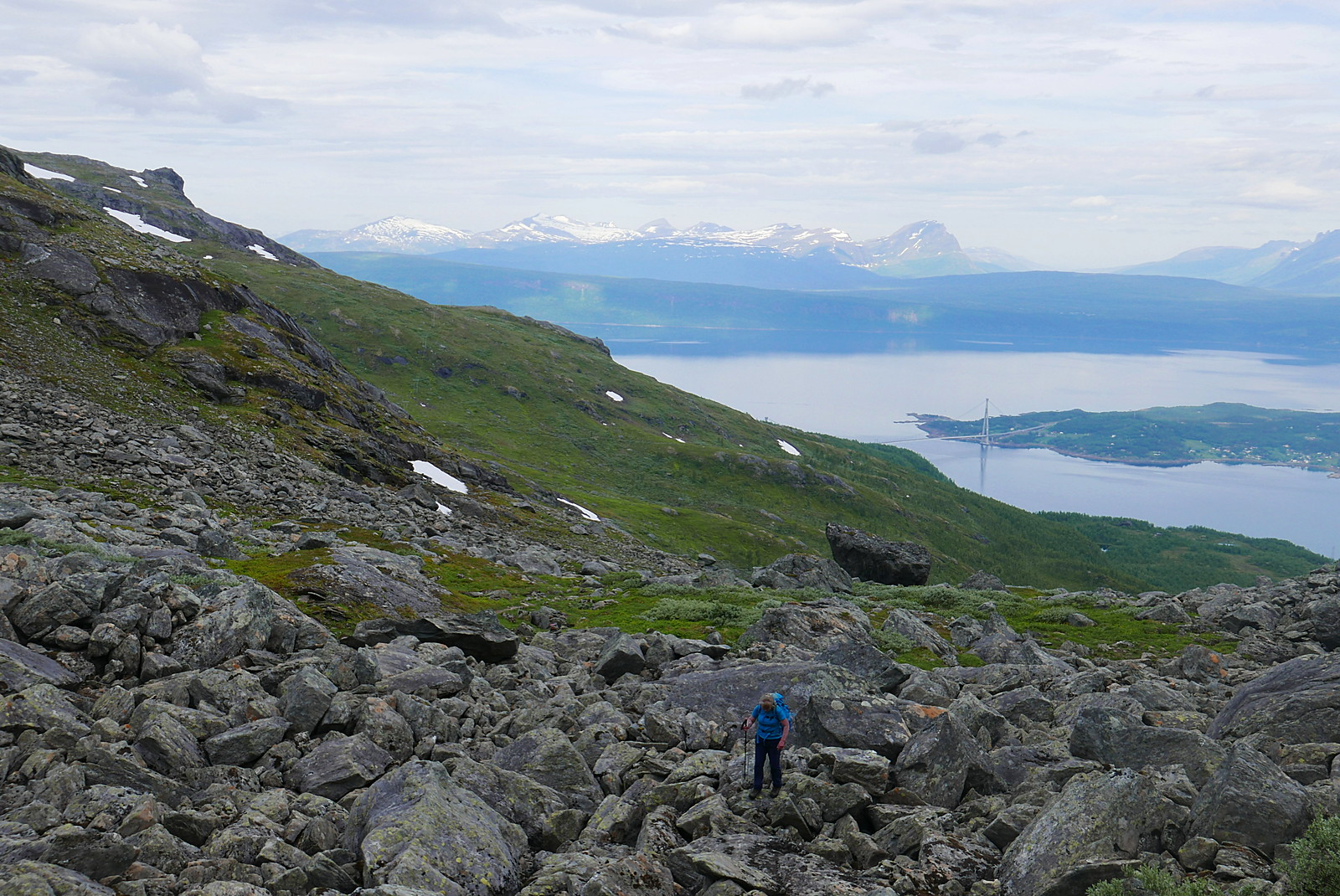 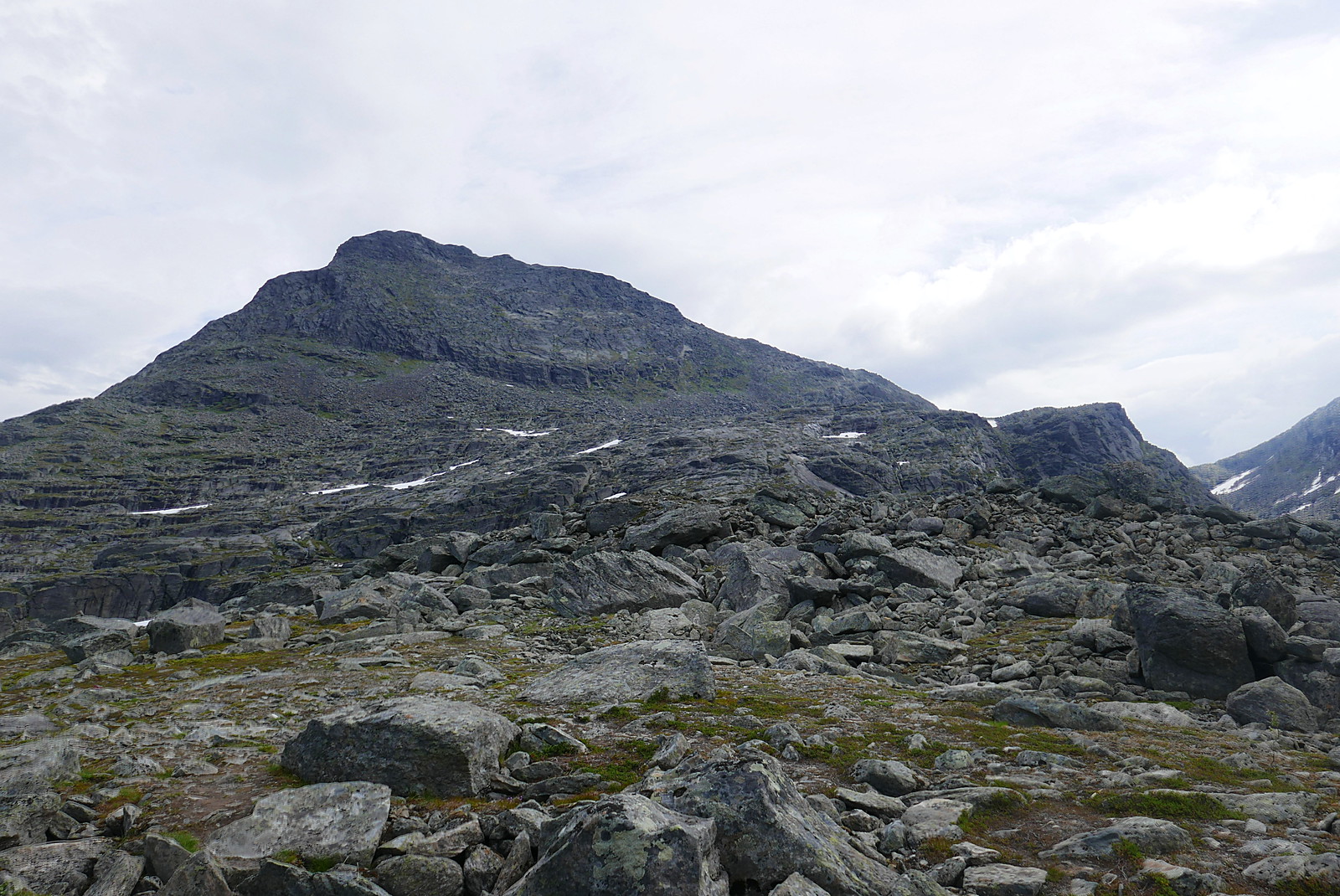 Looks a bit less ridiculous from this angle! 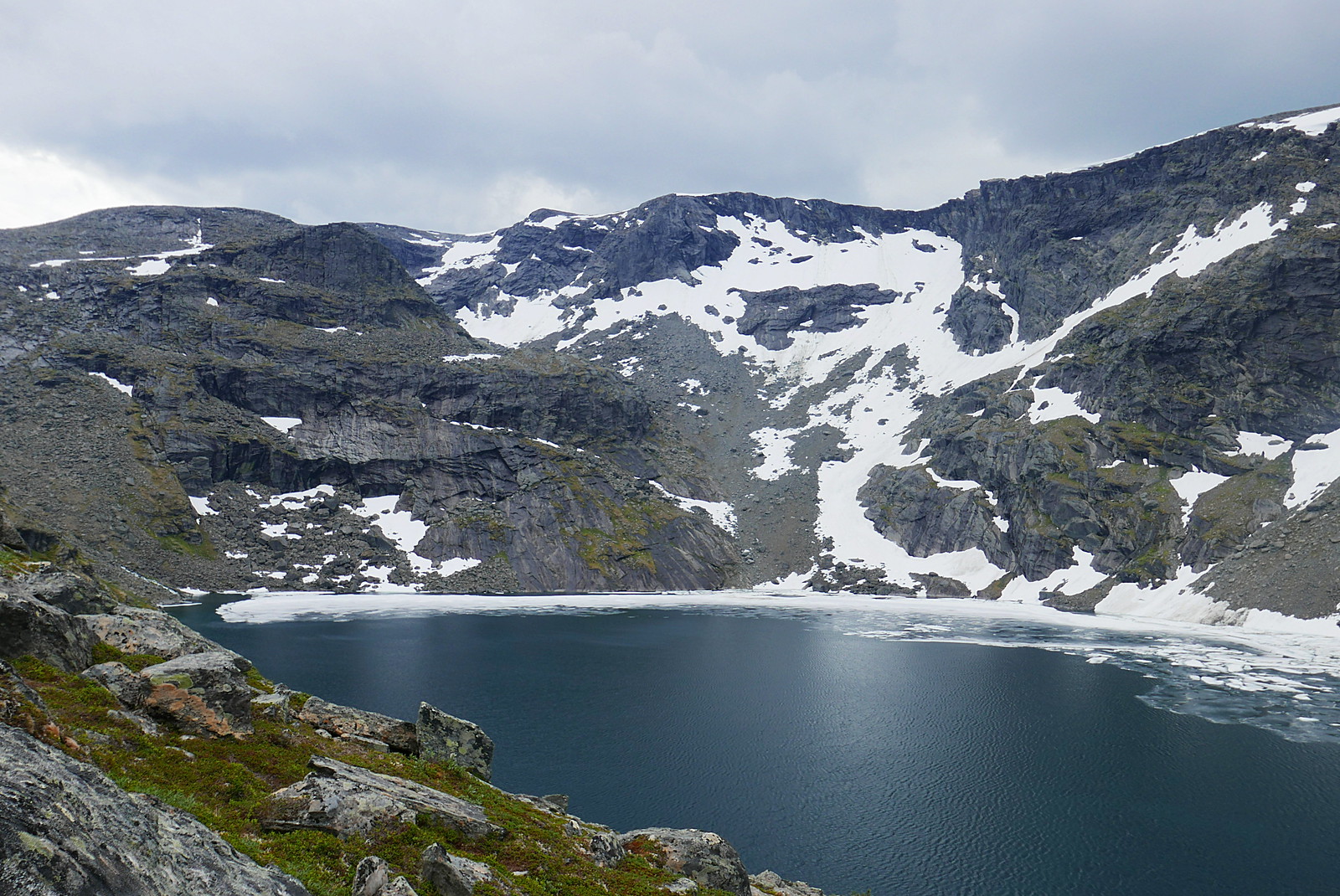 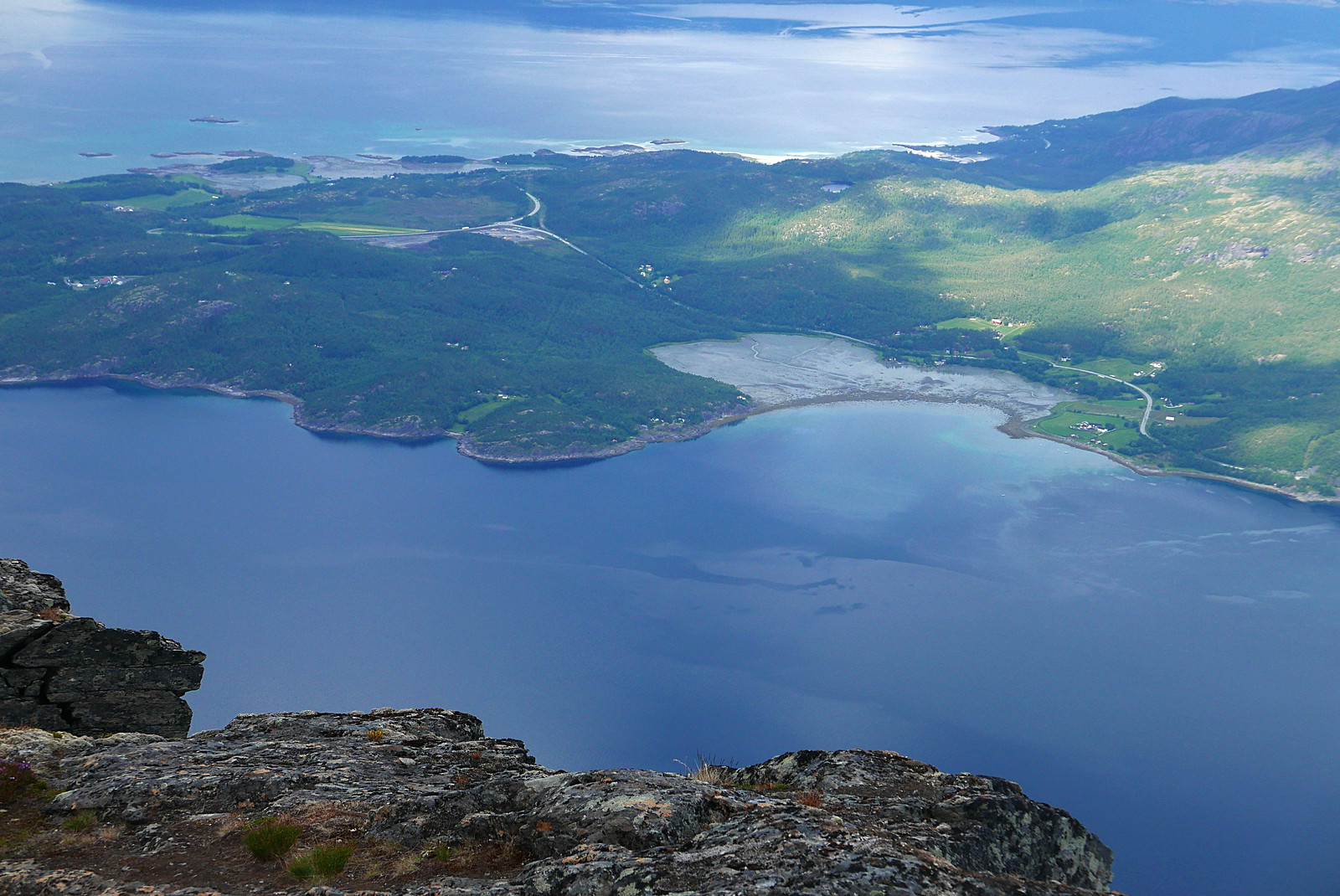 Looking down from the summit: our holiday cabin in the centre of the shot 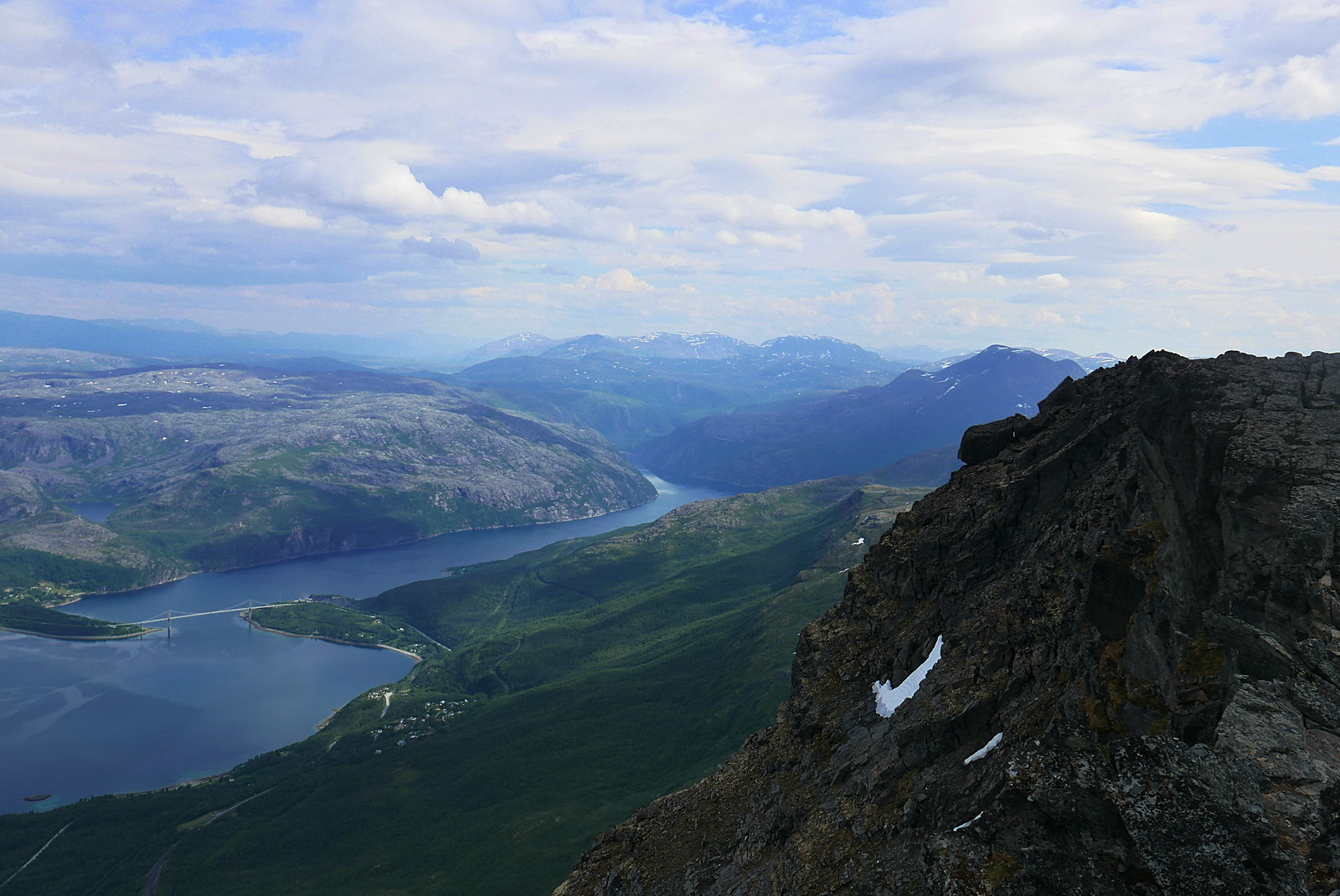 Looking east towards the Swedish border 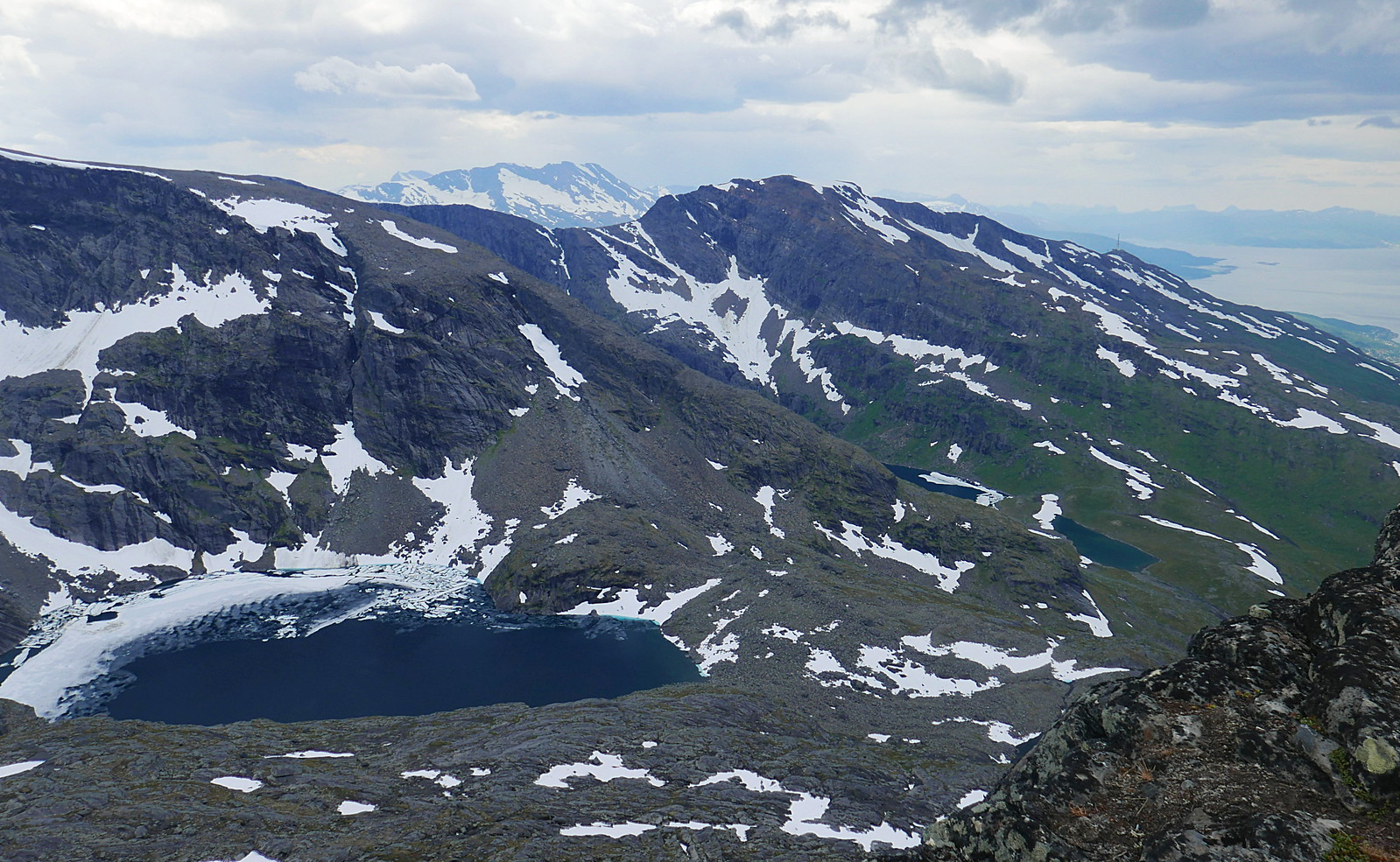 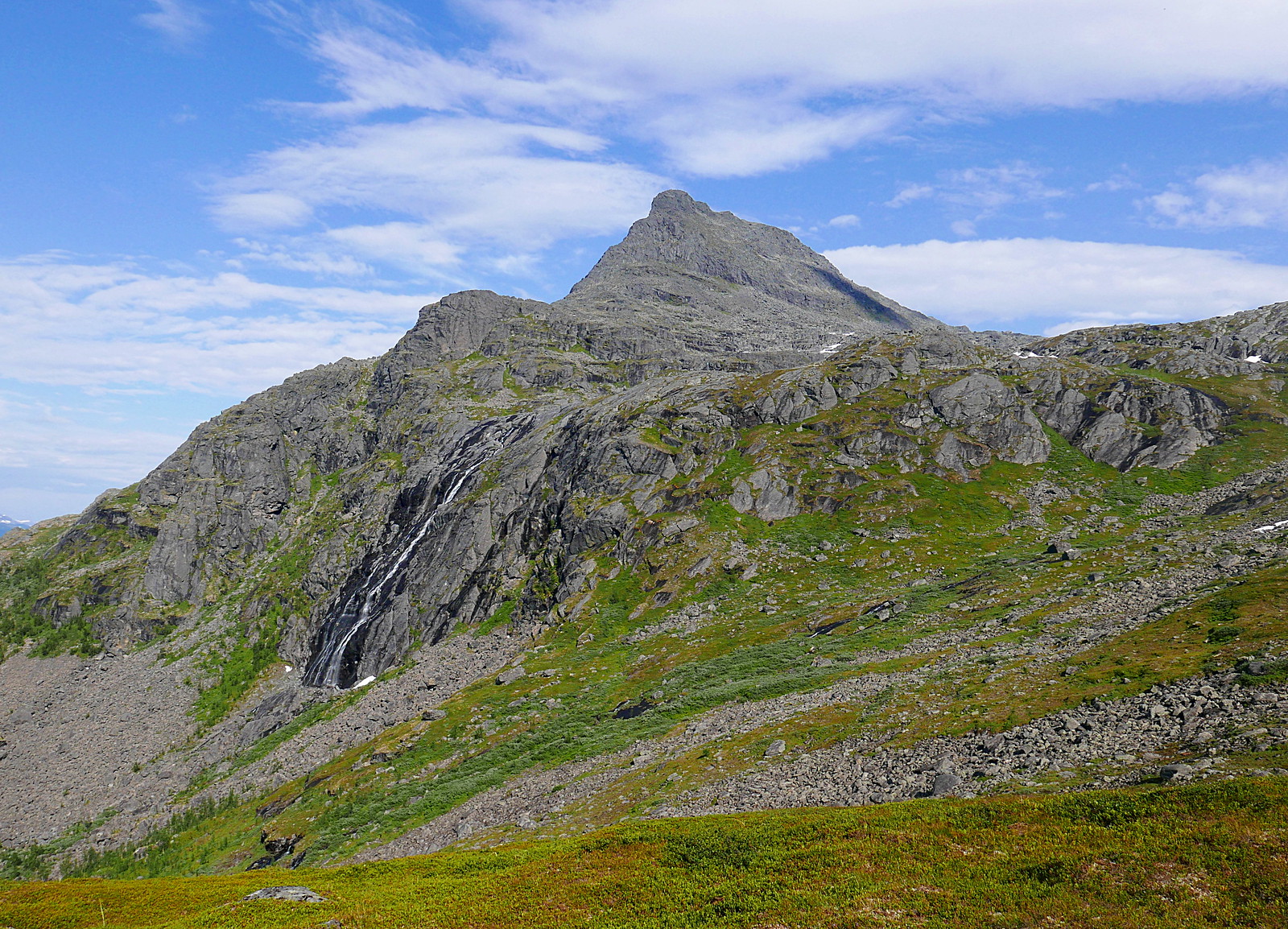 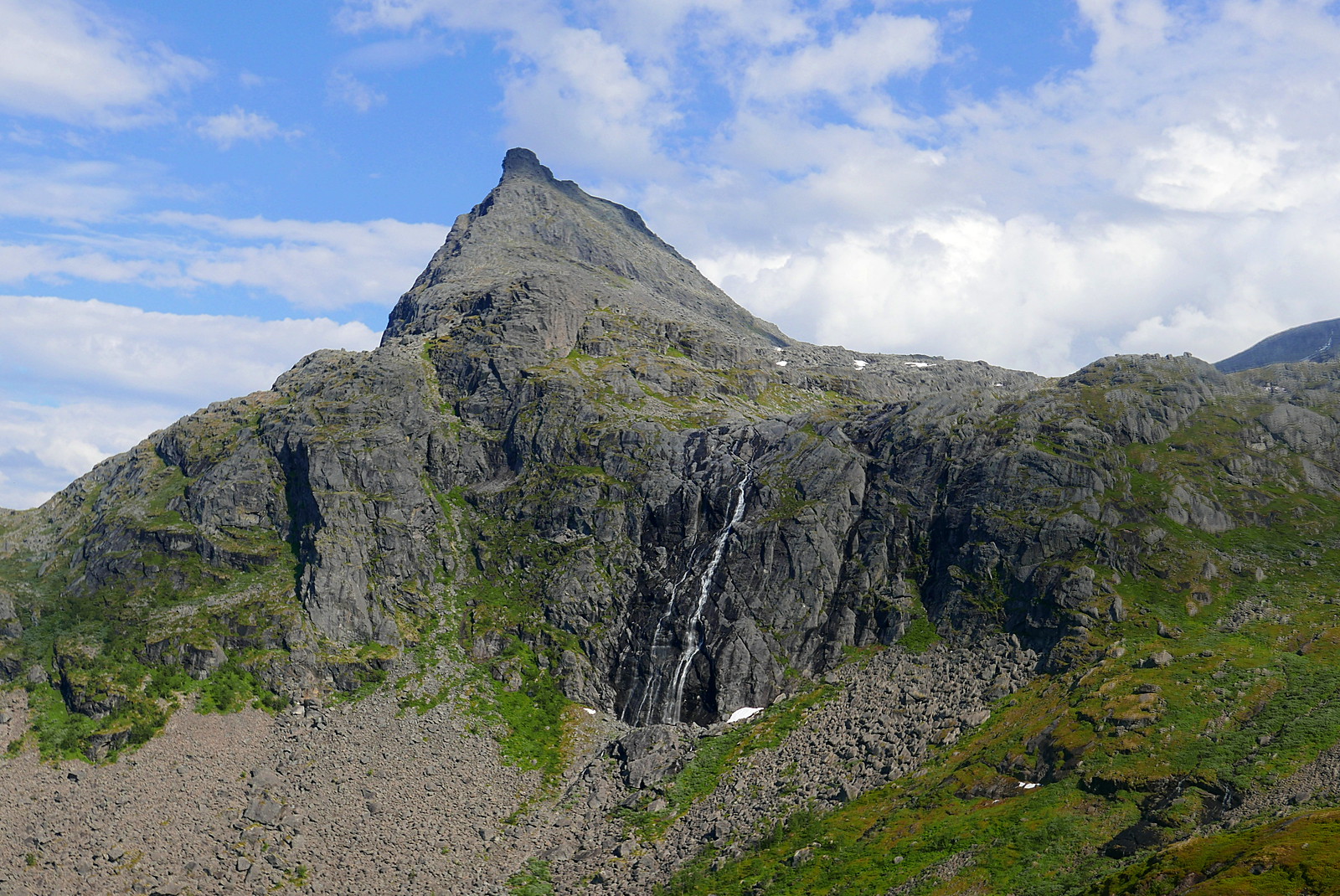 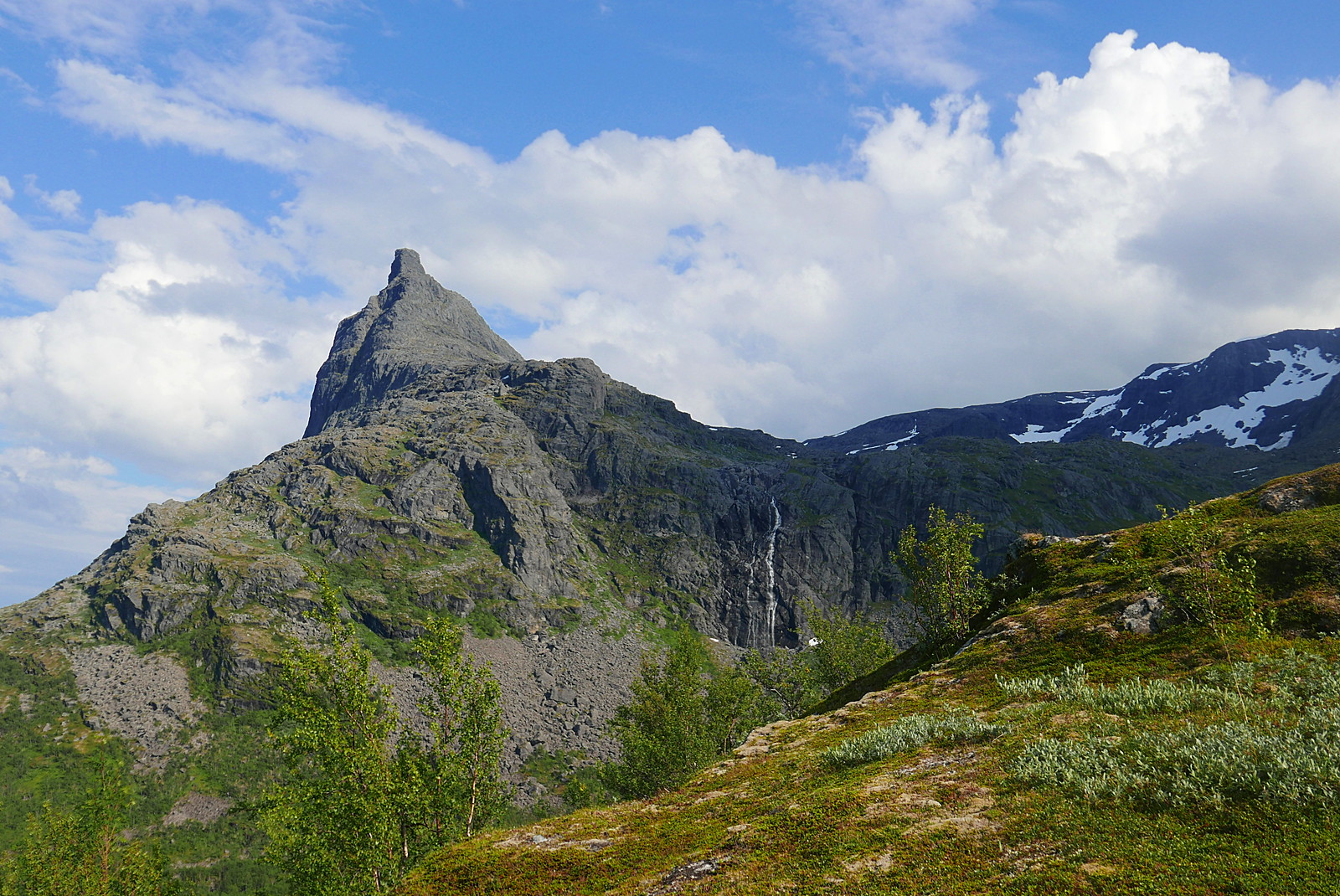 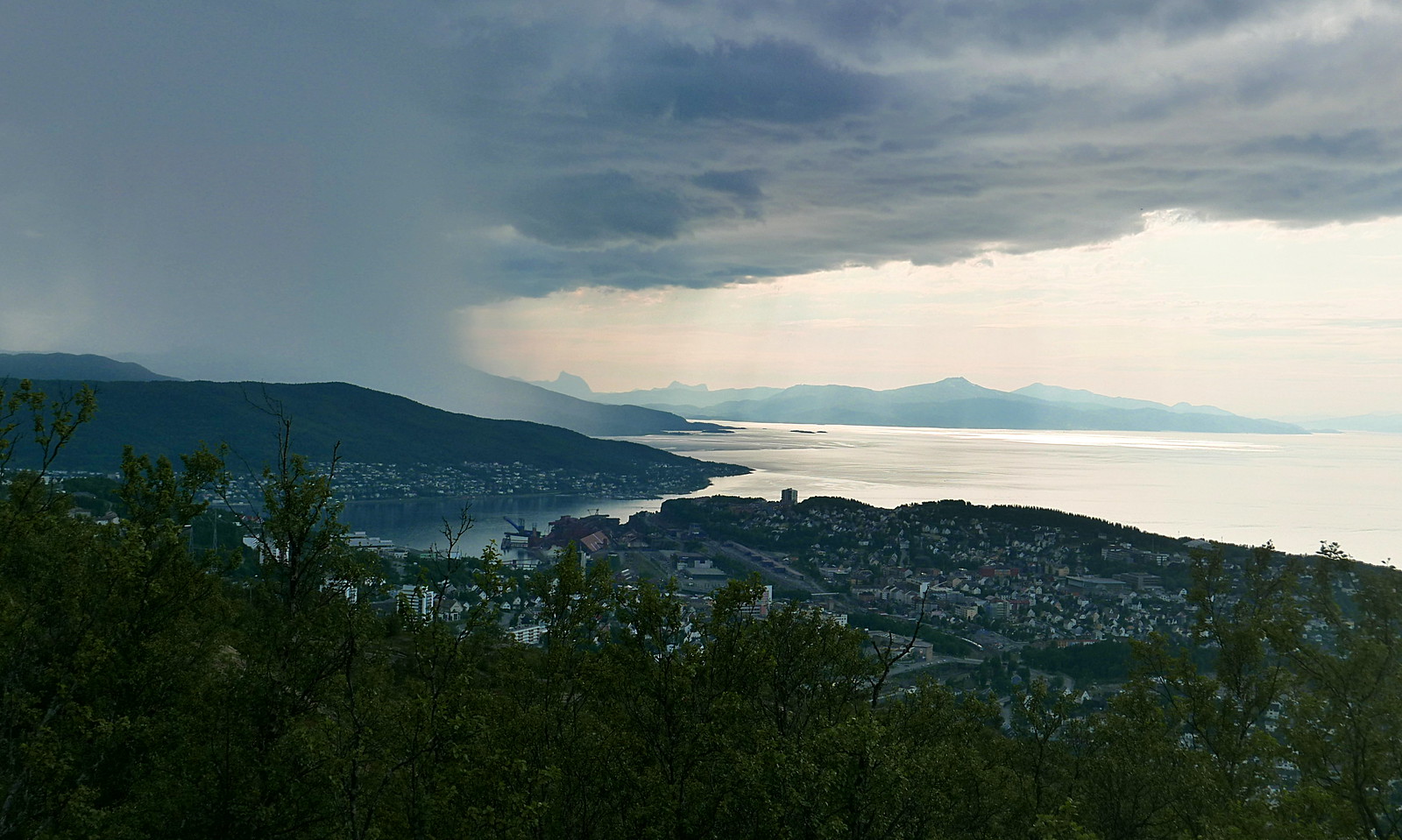 That summit looks terrifying from some angles. I always have to repeat to myself "There must be an easier back door," as R marches me towards some impossible shark fin.