Almost two years ago I climbed Pillar for the first time, as part of a traverse from Honister to Kinniside. It was horrible. A wet, windy and claggy ordeal over what I considered a dull route, up the East side from Black Sail Pass. I suppose the weather didn't help but I became really sick of the repeated false summits and lack of views of Pillar's most interesting features. Since finishing all 214 Wainwrights, I've been re-climbing some of the better hills by more interesting routes. The first time I climbed Blencathra was 'round the back', via Scales Fell, in atrocious conditions. So I repeated it via Sharp Edge in, well, equally atrocious conditions, but still!

The mountain I really wanted to repeat was Pillar, ideally via a route around Pillar Rock. I was staying with my parents in Ennerdale, so decided to take advantage of a window of perfect weather to climb Pillar from the North, then go over Scoat Fell, Haycock, Caw Fell and Iron Crag back to Ennerdale.

The forecast was for snow so I brought my ice axe and crampons. From the lake, the Ennerdale fells looks completely snow free though, so I decided to leave the winter gear in the car. I started at the outlet end of the lake at 9.30, following the coast-to-coast route along the lake, via Angler's Crag: 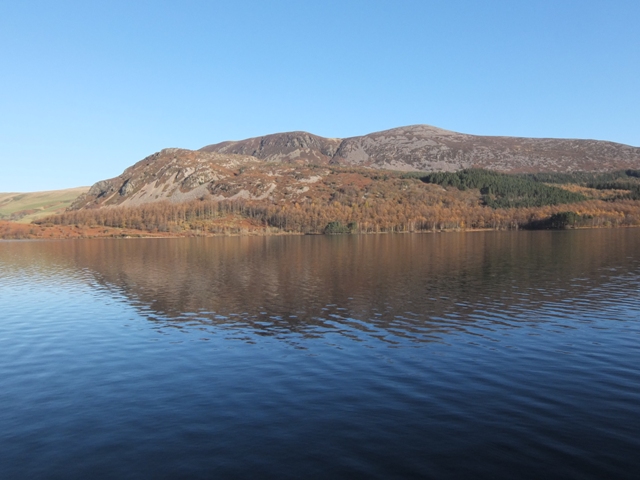 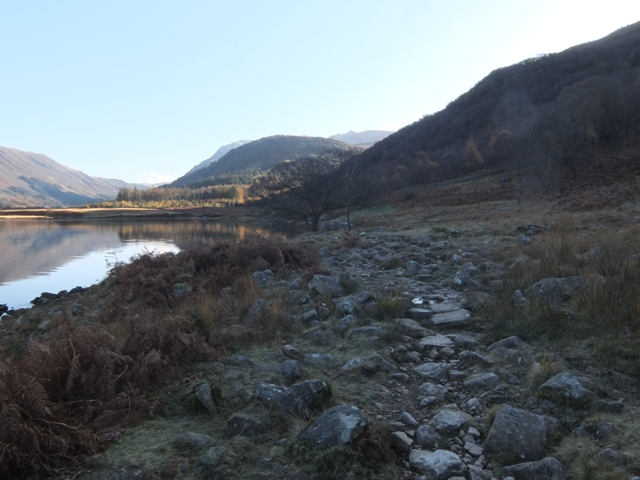 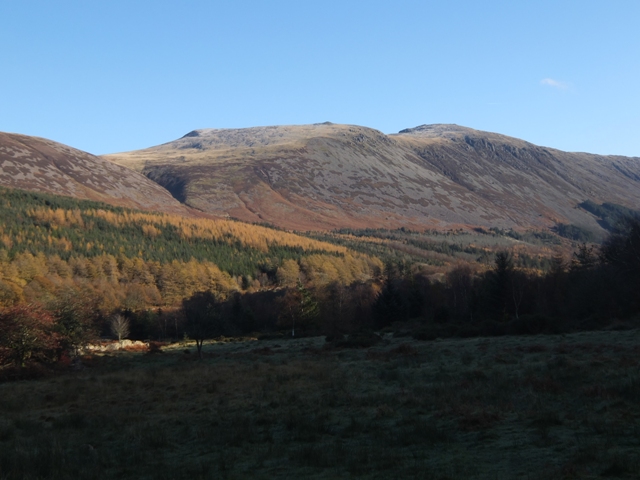 Moss Dub brought back memories. Many years ago I went on a mountain bike trip around the lake district, starting at Ennerdale. After cycling to the end of the lake I got a series of punctures, all within about a mile, until I had no repair patches left. In a fit of petulant frustration I picked my bike up and threw it away without looking. Unfortunately I happened to throw the bike right into a huge patch of waist deep nettles. Wearing football shorts, I took an age to slowly trample down the nettles until I could reach the rotten dammed bike and wheel it all the way to Honister Hause. That was the day I realised mountain biking wasn't for me. 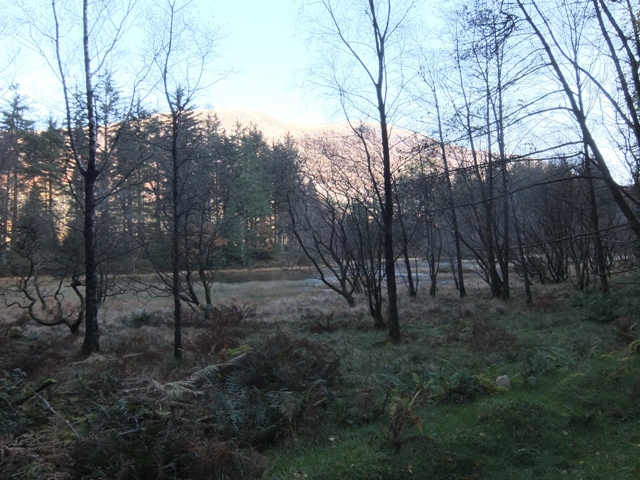 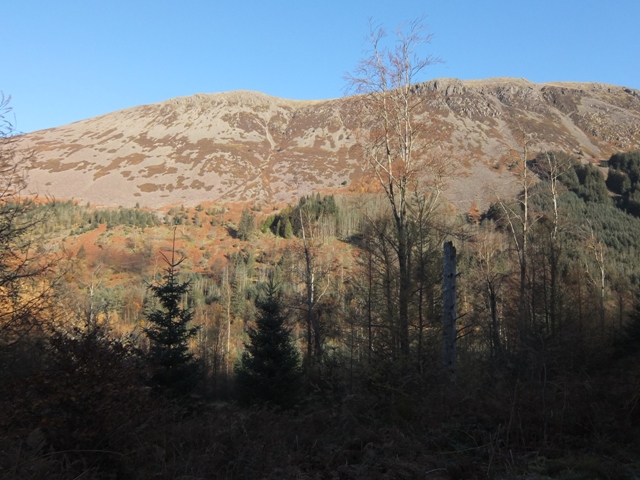 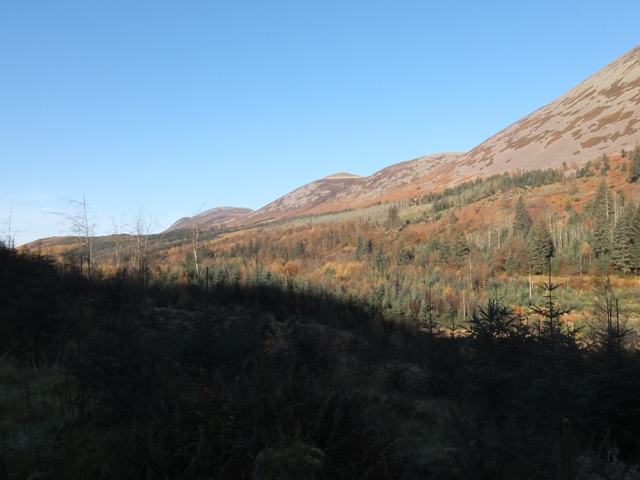 Shortly after reaching the High Level bridge (not the footbridge further up), there is a faint path marked by a post leading South East up towards Pillar. This starts off quite boggy and indistinct before turning left through an obvious gap through the trees. The route passes over another forestry road before a final section leading out onto the open fell, below Pillar rock. 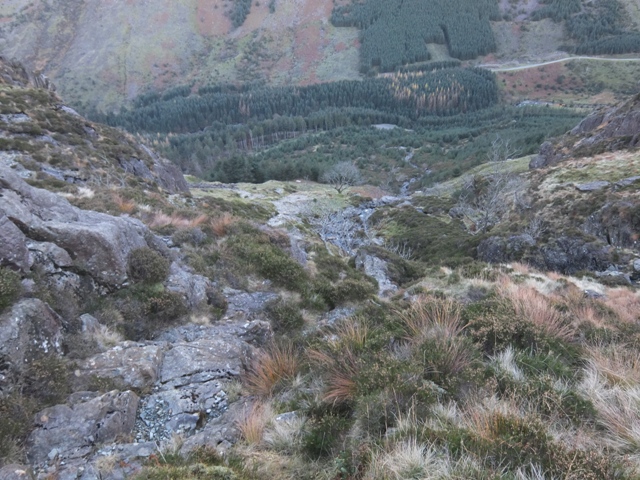 After an initial steep climb, the ground levels off and opens out into a vast amphitheatre with Pillar Rock in the centre. The main route goes up the left hand side of the rock. It is apparently possible to climb up the right hand side, although this is more of a scrambling route. 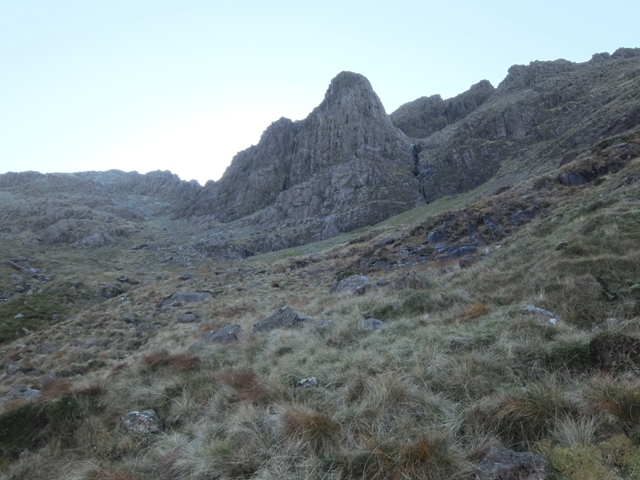 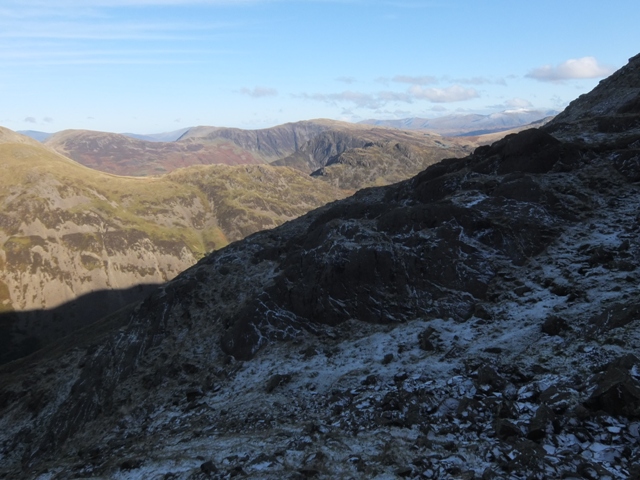 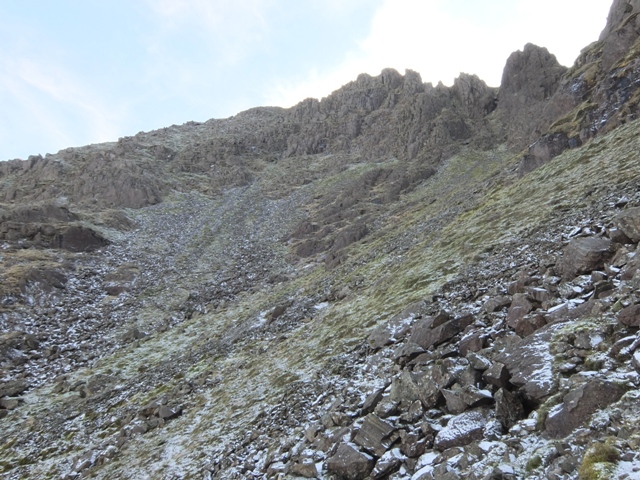 About halfway up, the ground became frosted, though not icy. Eventually I reached a point where the path appeared to split. One route appeared to climb further up the mountain, while the other made a traverse around the corner: 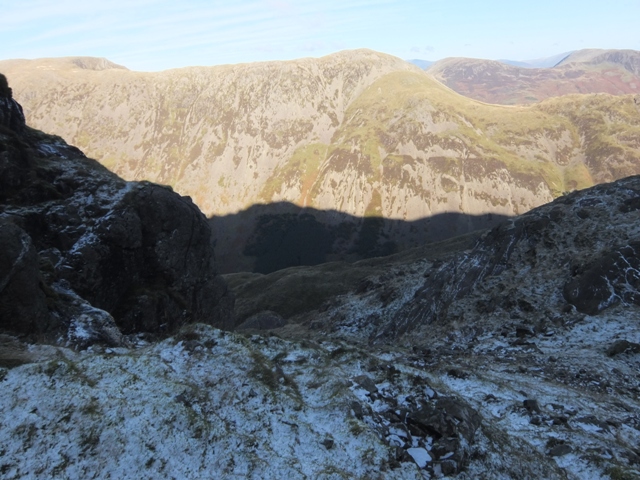 I couldn't work out from the map which route led behind Pillar Rock. I set out to follow the traverse, which involved crossing a few icy slabs above the crags. There were a few 'slip-and-die' sections in which I seriously regretted leaving my crampons behind. The route led round a corner but I could not get a clear view of what was coming next without stepping out onto the ice. I still wasn't 100% sure this was the correct route and was concerned I may be following a climber's path. So I decided to backtrack, re-crossing the 'slip-and-die' sections, to where the track split. 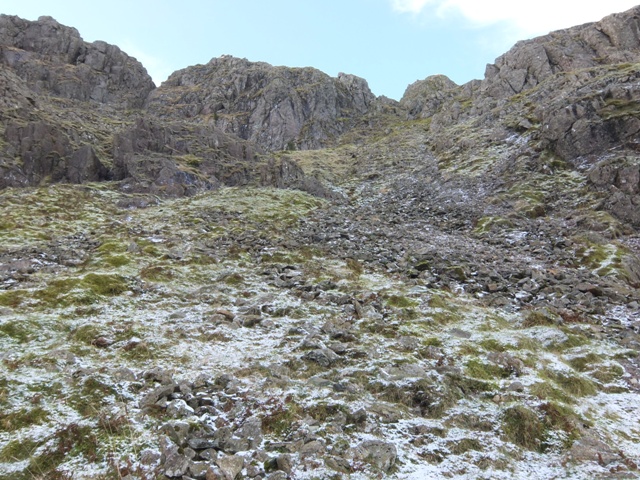 The other path was less distinct and after a while I lost it completely. After climbing 100 m or so I found another faint path traversing back over towards Pillar Rock. Following this, I eventually joined the proper route climbing up from the rock. It appeared the first route I took was the correct one after all. OK, so 'Pillar done properly' might not be such an appropriate report title, but 'Pillar done mainly properly except for a section where I got lost' doesn't sound so good 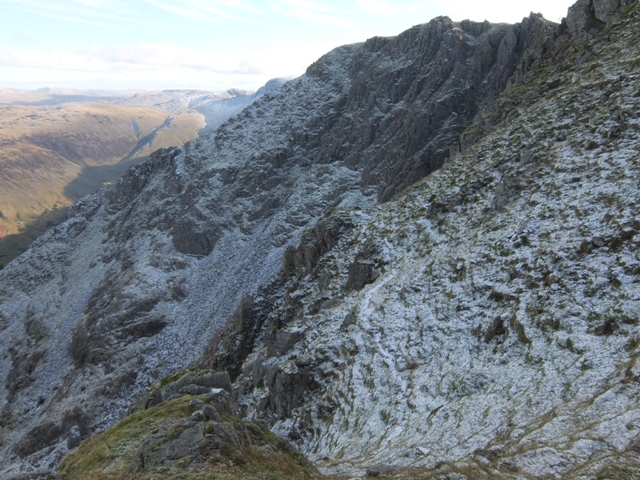 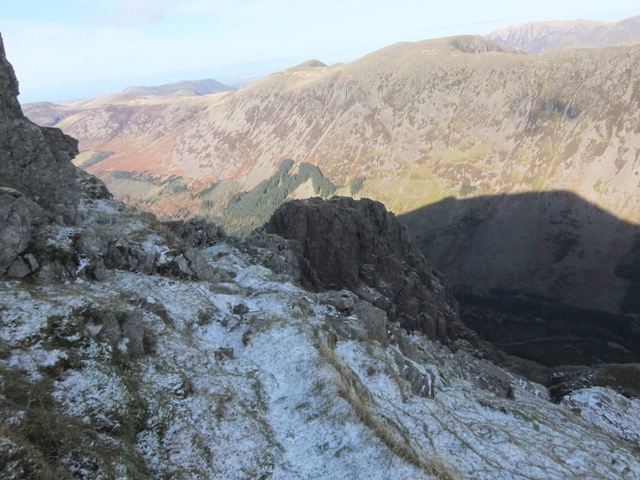 After that, I climbed the remainder of the mountain, doing my best to follow the faint path. 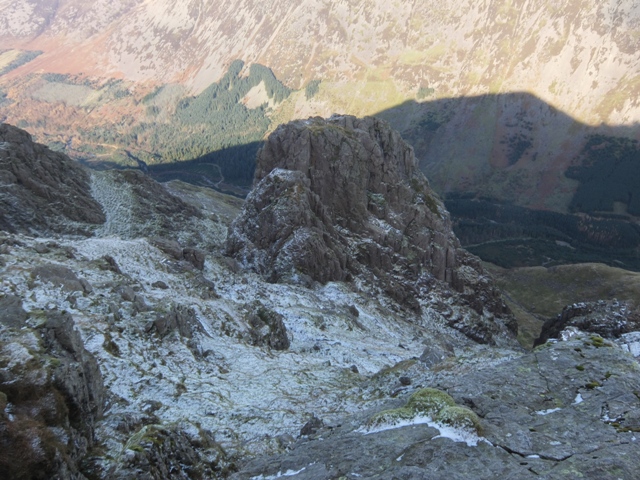 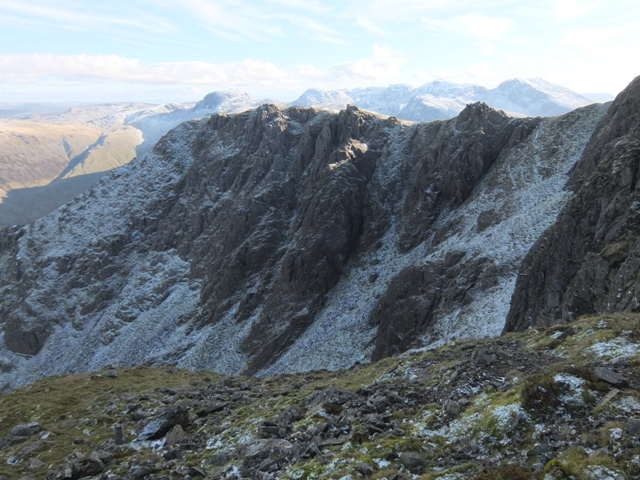 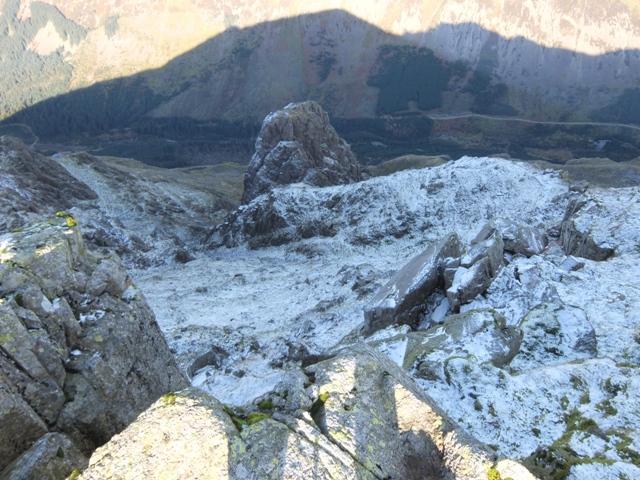 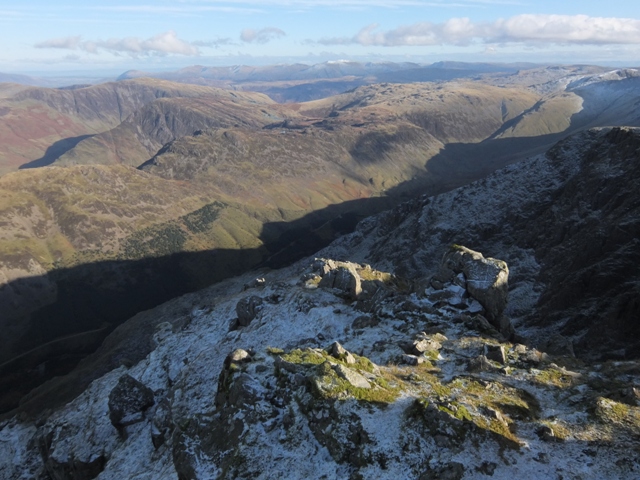 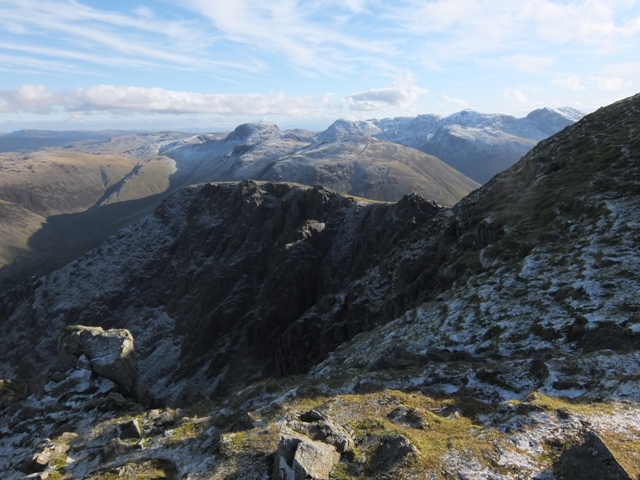 The summit of Pillar: 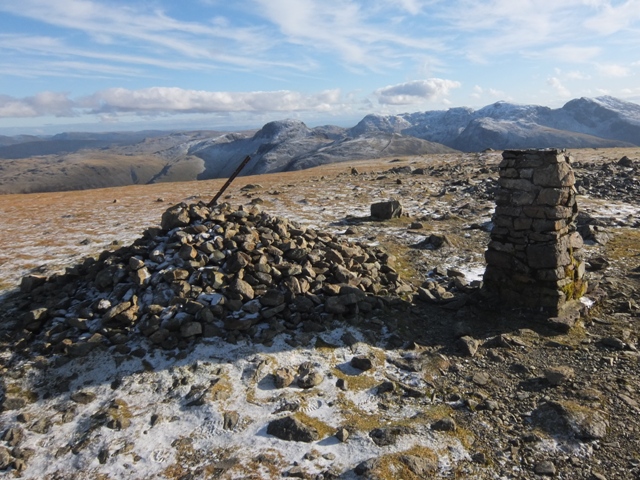 The start of the long plod home along familiar ground: 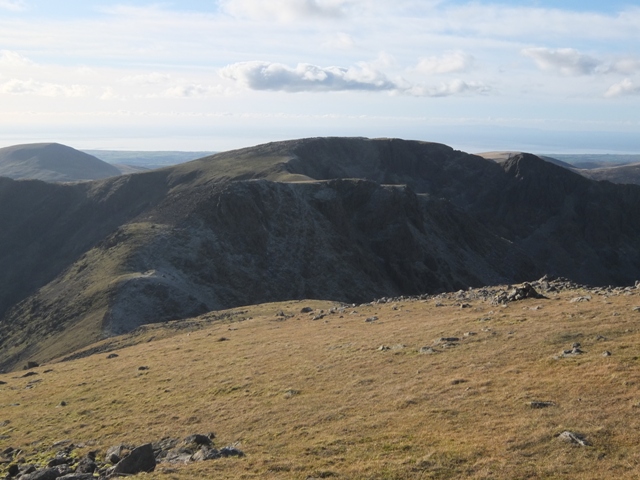 I noticed this very defiant tree near Wind Gap the last time I was here and was delighted to see it's still managing to survive: 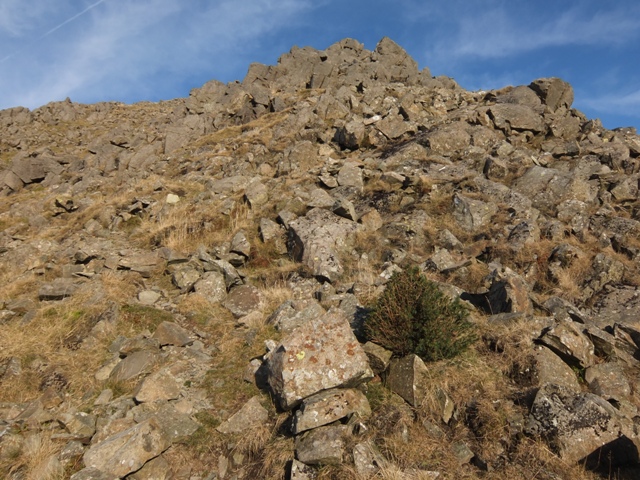 I won't bore anyone with details of the remainder of the route. Get to the wall on Scoat fell, follow it all the way (taking a 10 minute diversion to climb Steeple again). That's it

Pillar section of the route:

it is indeed a fine way up Pillar, one of my favourite routes that I've done. The shamrock traverse does deserve a little respect if the slabs are in any way slippy. Sunday was a beautiful day, if a little chilly early on. I was wandering around Middle Fell and Seatallan enjoying the views I missed last time I was there.

Ah yes - the Shamrock traverse. In about 1990 Norman and I started from Honister, went all under Gable (Moses Trod) and Kirkfell to Black Sail: then High level route to Robinsons cairn, up Pillar via Shamrock traverse, back down ridge to Black Sail, into the valley, up Loft Beck and back to Honister. Firm neve most of the way - crampons on for seven hours and last three hours in the dark: final descent to honister a mass of water ice and we'd taken off the crampons by then

. One of the best winter outings I 've ever had in the lakes

- we just don't get snow like that any more

Yes indeed, it seems a shame that so many people walk the usual Black Sail route up Pillar and never see the Rock. And going directly up from Ennerdale gives the best view of the Rock IMO - it looks like a proper column towering up, as your photo so well shows.

Last time I went there was last summer when Karl & me did North-West Climb from the Green Ledge up the front of Low Man. We had intended scrambling down from there to the foot of High Man west face to do Rib and Slab, but the clag was coming in, it was chilly and time was running short, so we just scrambled up the upper part of the Old West route to the top of the Rock then abseiled into Jordan Gap and walked up to the top of the Fell. A good day, but it was a shame to miss out on Rib & Slab; we'll have to go back for that one.

Nice report & pics. In the frosty conditions perhaps Microspikes would have been useful, rather than crampons?

Yes the 'microspikes compromise' would have been a better option, I think!

I've just had a look through Wainwright's Western Fells book and wish that I'd had this with me instead of the OS map. There's a drawing showing the start of the traverse that's very similar to my photo and confirms I was on the correct path to begin with

The route I took was OK, but I really regret not doing the full traverse and seeing Pillar Rock up close.

Crampons....I seem to recall that you have some trouble keeping both of them attached to your boots.

gaffr wrote:Crampons....I seem to recall that you have some trouble keeping both of them attached to your boots.

- but modern crampons with plastic front and rear sections and a single strap are so much easier. i've got Grivels and they are a really joy

I think gaffr is referring to this:

Pointless Parasite wrote:I think gaffr is referring to this:

Surely once you've got the straps tightened on your feet you should cut off most of the excess straps, and heat seal the ends. I agree they are no use in soft snow - UNLESS there is icy bog beneath it - not a problem you get in tthe alps

All sorted now...on the Forum for helpful advise.