Swiss 4000nders 9A The Gross Grunhorn

Swiss 4000nders 9A The Gross Grunhorn


On account of problems with google photos and the maximum no. of attachments allowed by WH I have had to reissue this report which originally formed part of a longer one Including the Fiescherhorner and Finsteraarhorn Traverse from the Finsteraarhorn hut over the Gross Grunhorn to the Monchsjoch hut
The route (SE face) climbs into the snow coombe SE of the summit, crosses the SW ridge near point 3585 and ascends a steep snow couloir to the rocks. The upper half of the route Early morning view of the Finsteraarhorn: the hut lies near the narrow snow ribbon leading up from the glacier. the route climbs this trending L and crosses the ridge about half way up to reach the big snow slope well above the Icefall Sunrise over the Walliser Fiescherhorner Higher on the face looking SW across the ridge to the Valais
The rock climbing was again pleasant and easy ( II - III) on good rock and we moved together most of the time. The route is graded D (difficile) but in my experience of the lower alpine grades it is the conditions rather than the grade that determine the difficulty - and today's were perfect West from the just below the Summit: the big glacier area is called the Grosser Aletsch firn, and the pass at the end the Lötchenlücke Another view of our first day descent - on the extreme R of the icefall in the lower L of the picture. The steep ice gully we ran beneath is directly below the Schreckhorn Klaus on the summit
We descended south to the col before the Grünegghorn and then made quite a complicated descent through various icefalls to reach the Ewigschneefeld. The ground was quite crevassed, but the crevasses were very obvious and it was just a matter of manoevring round them. The Finsteraarhorn through a notch in the South Ridge Descending the S ridge towards the Grünegghorn
Once on the level Schneefeld it was jus a flat 5Km walk back to the Mönchjoch. The glacier surface then was completely smooth whereas today I imagine it would be highly scalloped and much more tiring 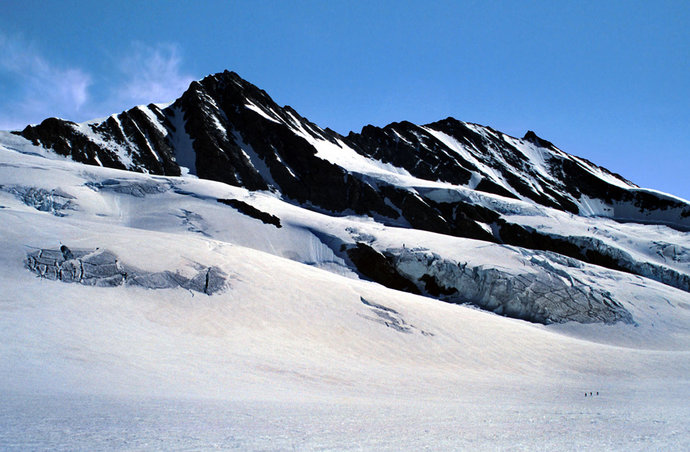 You walk for half an hour and the view doesn't seem to change at all: but eventually we made it back to the Mönchjoch hut

Incredible. Must be one of the most remote of the 4000ers in the Alps. This was the mountain the great Swiss climber Erhard Loretan was killed on in 2011.

Pointless Parasite wrote:Incredible. Must be one of the most remote of the 4000ers in the Alps. This was the mountain the great Swiss climber Erhard Loretan was killed on in 2011.

I suppose in a way it is remote, but if you're at the Finsteraarhorn hut and on your way back to the Jungfrau joch it's right in line

Wow, thanks for those pictures, what a cracking mountain. Well done.