We slept well, but were woken at about 4.30am by early climbers from the hut crunching past, so we had breakfast and set off about 5.00. There was a big track across the glacier, but the snow in the gully was unconsolidated and we moved to the rock ridge on the L as soon as possible. and reached the shoulder at about 6.30am 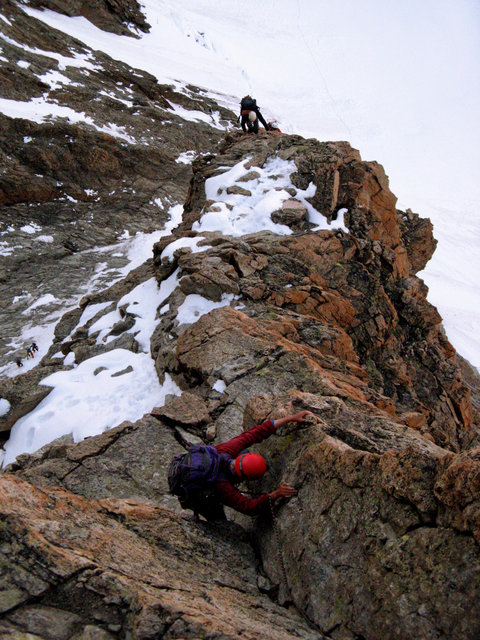 Climbing the rock ridge to the shoulder 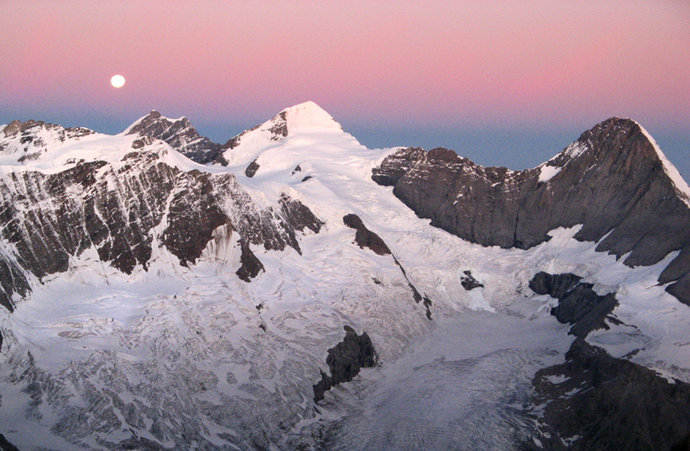 Full Moon over the Jungfrau, Mönch and Eiger 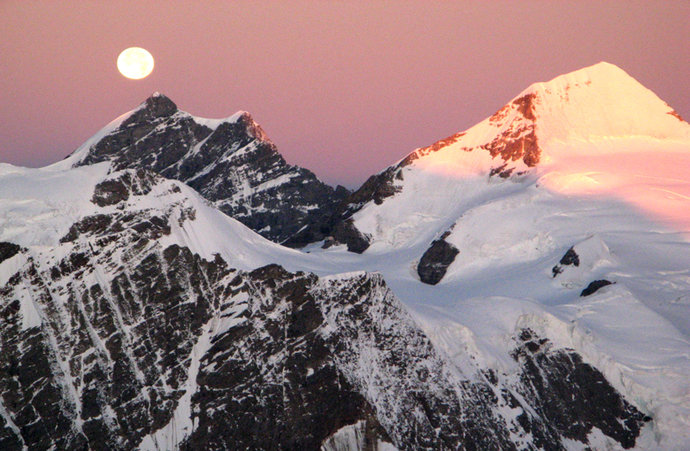 Sunrise and moon on the Eiger 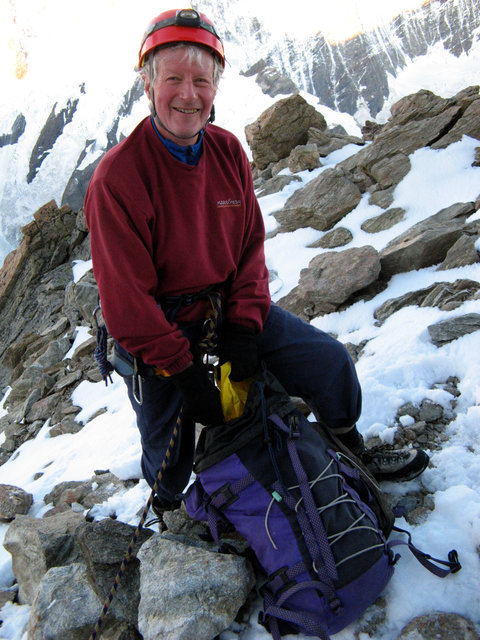 At the shoulder - I don't often wear one, but with all these people on a rock peak a helmet is essential

Early morning views from the Shoulder 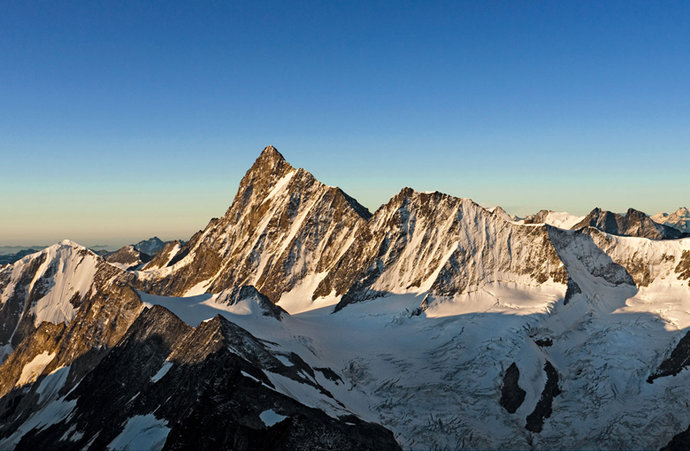 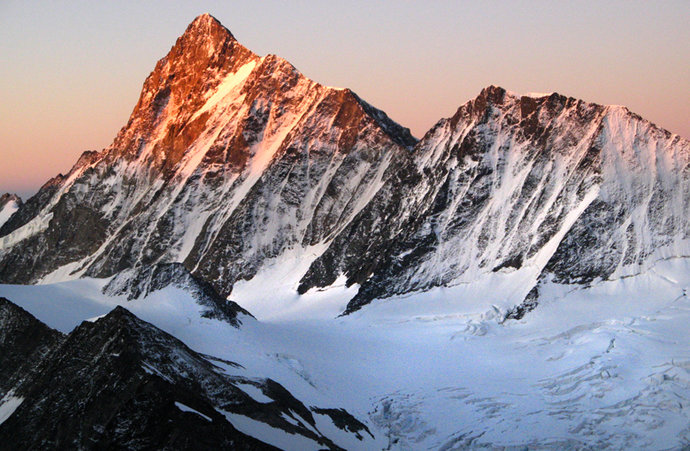 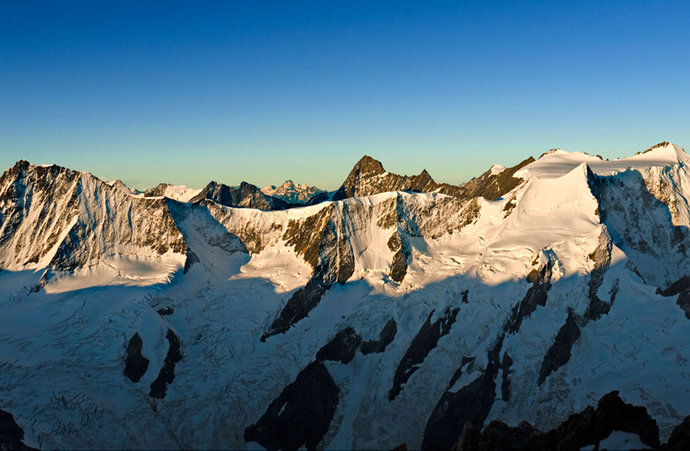 The Grünhorner appear over the ridge 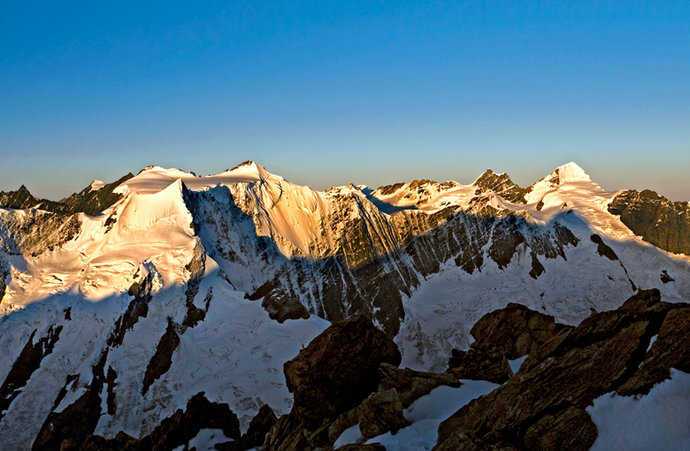 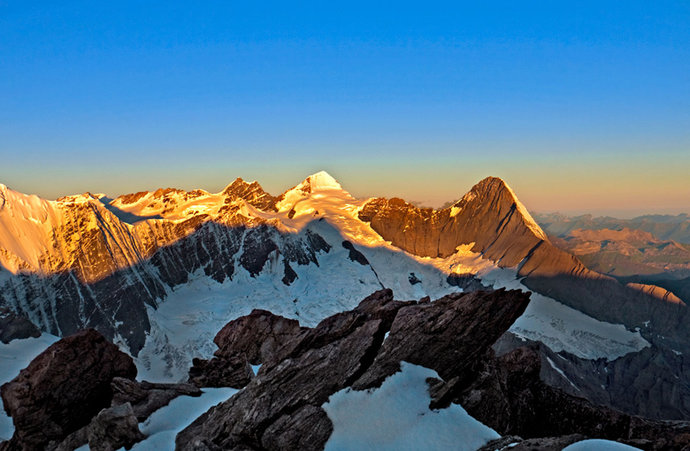 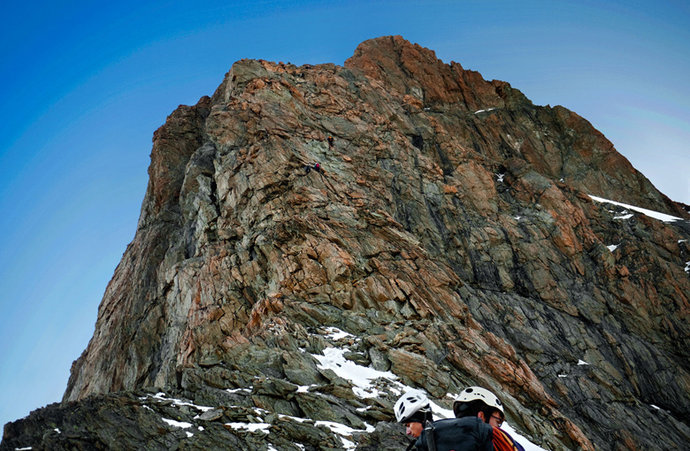 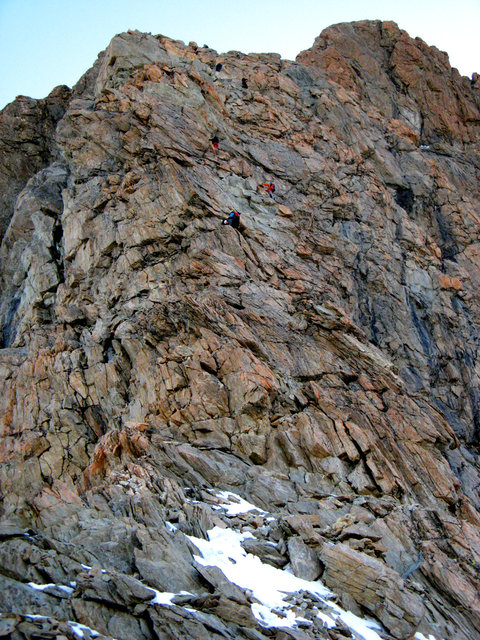 Looking up from the shoulder - there are already a lot of climbers on the face
The climb looks quite dramatic, but the Schreckhorn is composed of a compact red Gneiss absolutely plastered with holds and it's no more than a (rather exposed) grade 3 scramble. Speaking about it later to a fellow club member she said " Oh yes - we took the rope off" I can't remember exactly how we did it, but with so many other climbers there was quite a lot of waiting. 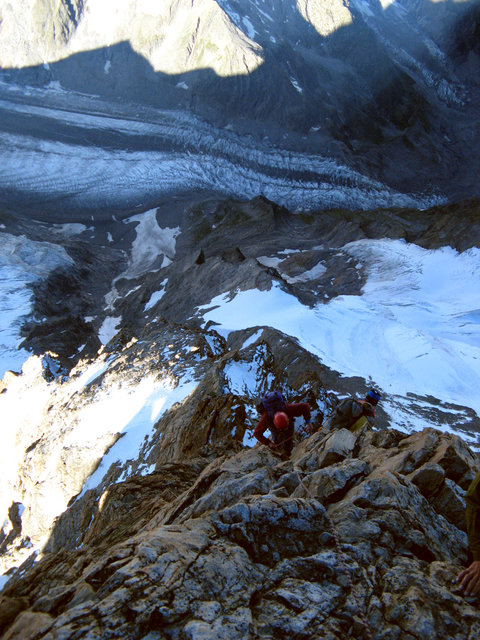 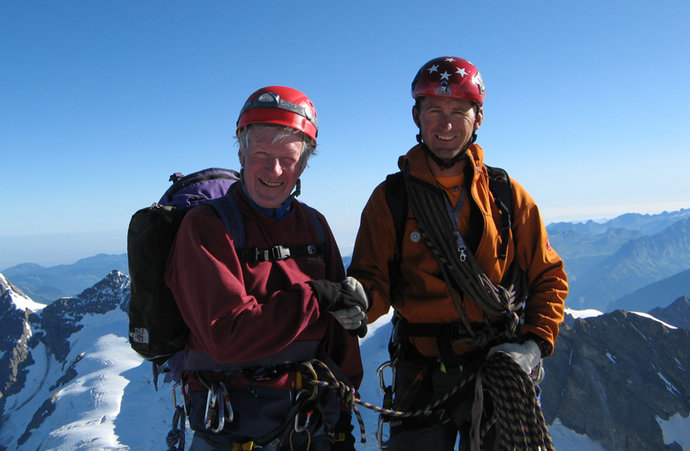 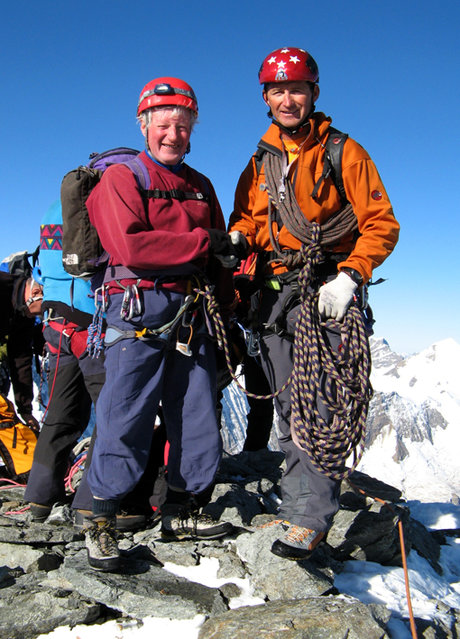 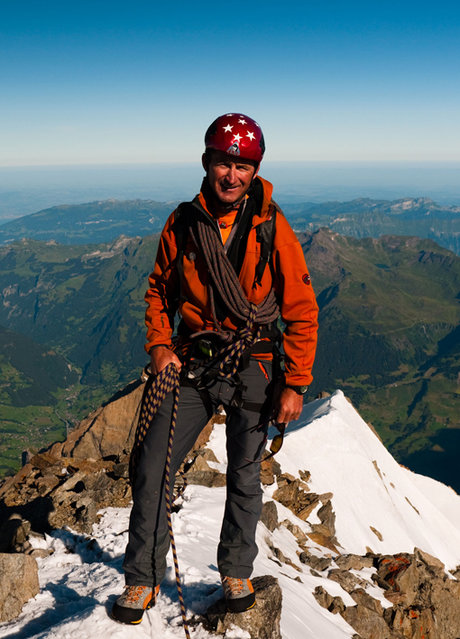 Double celebration - both Klaus and I were completing the Swiss 4000nders

The top was very crowded but the views were superb - may be the clearest I've ever had in the Alps. I'm showing them clockwise - starting in the East, but I've had to airbrush out one or two stray heads that got in the way 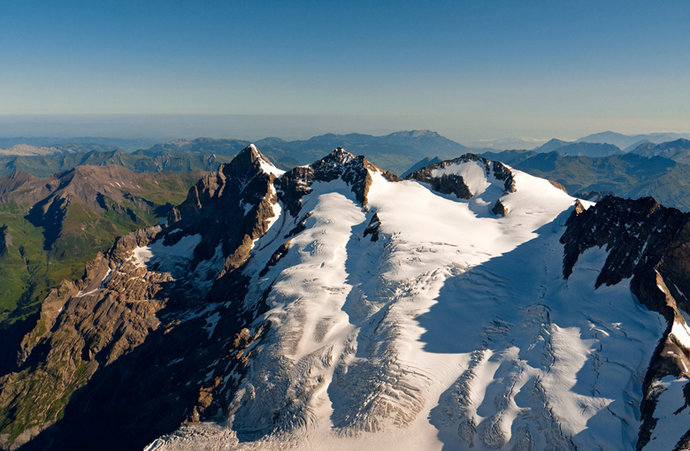 Looking East to the Wetterhorn 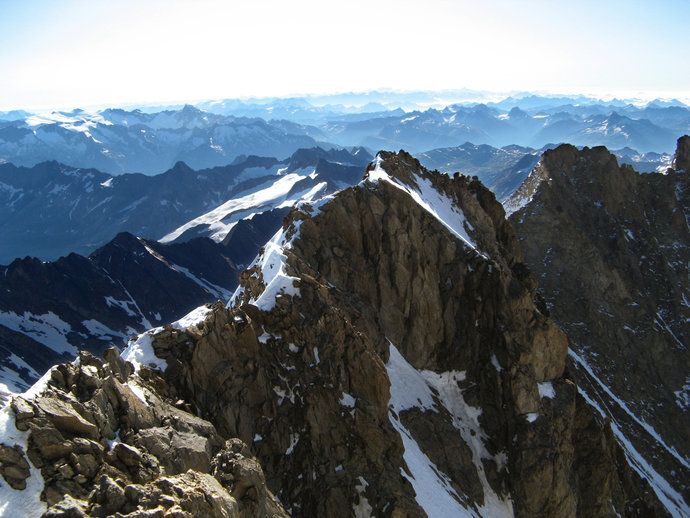 The ridge towards the Lauteraarhorn 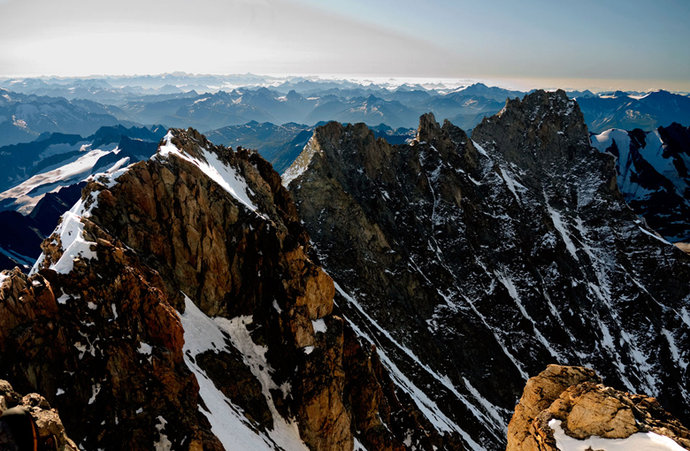 The first section of the ridge 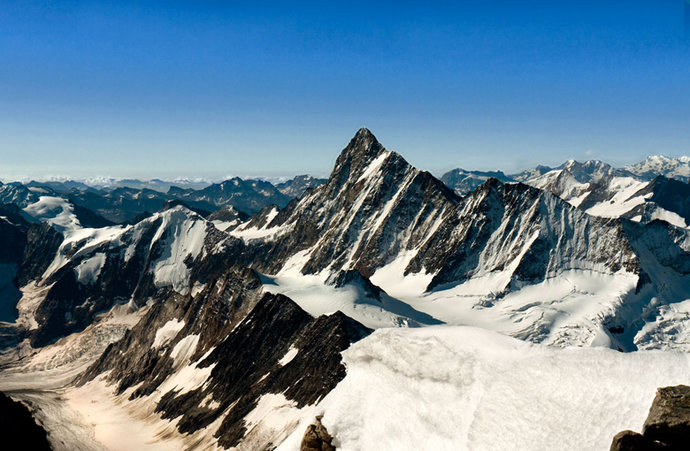 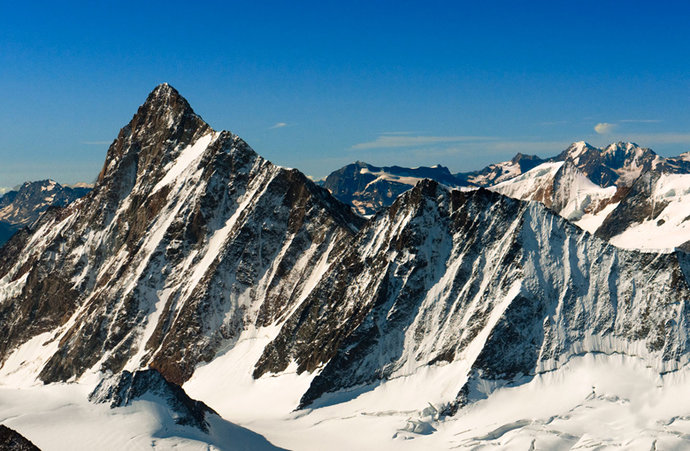 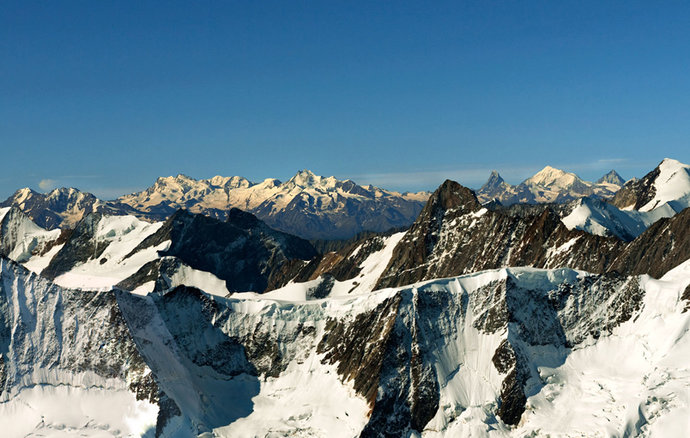 All the peaks of the Valais -

Enlarged from the last photo - Monte Rosa , Liskamm, Alphubel and the Mischabel 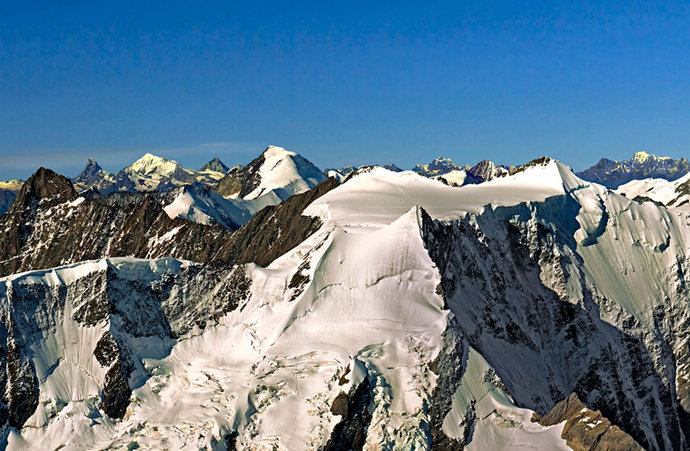 Looking over the Fiescherhorner: L of The Aletschhorn, the Matterhorn, Weisshorn and Dent Blanche stand out 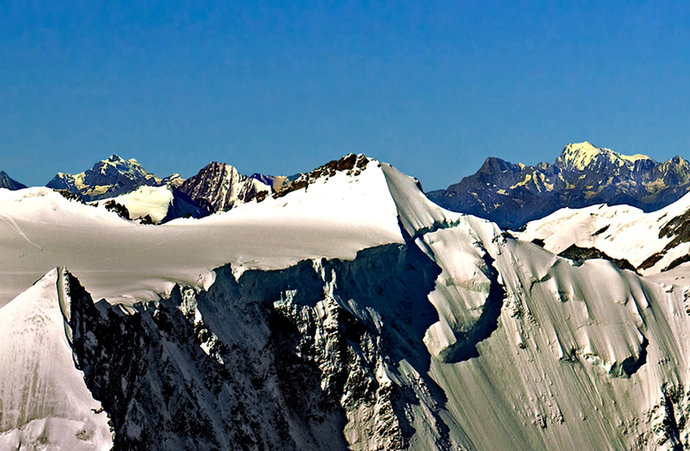 Another enlargement: Further R - The Grand Combin L - Grand Jorasses and Mont Blanc R : Mont Blanc is over 110 km away 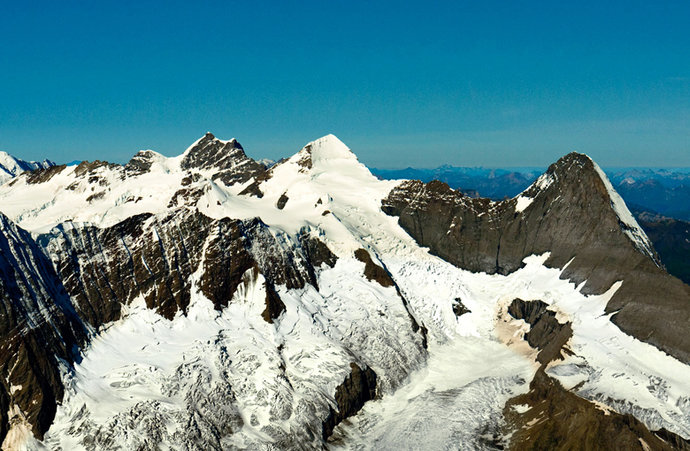 A final view of Jungfrau, Mönch and Eiger
Then it was back down: it is of course quicker, but the trouble with being lowered on the rope is that you're not in control and swing all over the place bashing your knees and elbows

This is the sort of rock that you want to climb on all day .
At the shoulder we took one or two more photos 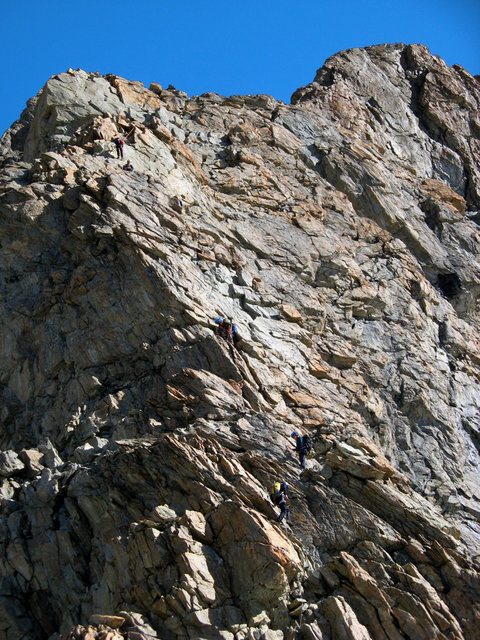 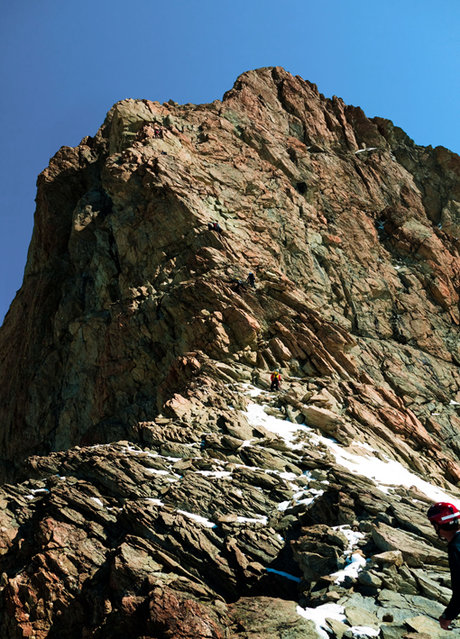 Looking back up - other climbers going both up and down From the shoulder, looking across the North West (Anderson ) ridge - another way up the mountain 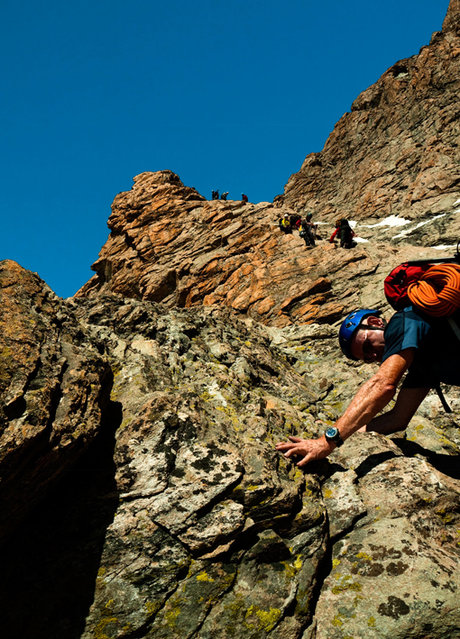 Then it was back to the camp where we repacked the barrels, Klaus phoned Air Glacier to come and retrieve them, and we then walked all the way back to Grindelwald

What a grand way with which to complete the high Swiss mountains....a quite remote peak.

My own rather minor connection with the area was on a fine walk in from the Grimsel Pass with an overnight at the Aarbiwak with a showing of alpine cushion plants amidst grand mountain/glacier terrain....up to the Stralegg pass for an ascent of the Stralegghorn.
What I recall of the massive Shreckhorn was a diagonal, icy looking, ramp up to a rocky ridge but with an obvious difficult looking schrund to enable the ramp to be reached.?
However the ridge up Stralegghorn enabled us to see the 'other side' from the way we ascended the Finsteraarhorn as is illustrated in your images. Overnight at the Shreckhorn hutte and then down to Grindelwald.
Days out in the Alps are always memorable.

That's really got me pining for the Alps. The Schreckhorn looks very tasty indeed! From your splendid photos it's hard to credit that the face leading up to the summit from the shoulder goes at mere grade 3 scramble (ish?); it looks proper climbing terrain - fantastically exposed in your pic of the downward view. The Finsteraarhorn looks amazing too.

Wow what an area.

Love the translation of the name 'scary horn'. That must have been fantastic! To get your stuff up by helicopter is brilliant. Amazing photos as well. Congratulations completing 4000 nders of Switzerland

Thanks all
Gaffr
Yes I've done that magic traverse https://www.walkhighlands.co.uk/Forum/viewtopic.php?f=16&t=69914 and the amazing thing is that you can get down to Grindelwald mid morning and be back at the Grimsel by bus in the afternoon - only in Switzerland

Dave
It's a rough and very solid red gneiss - like - the Nadelgrat - just plastered in holds. And not really that steep. Lets face it , when you look down a double black ski runyou think it's near vertical - even though it's only 35 degrees or so.

If you look at the last pic I think everyone is climbing down
Mountainlove
Thanks You've done some pretty exciting stuff too.

I love seeing the big Swiss hills in any report after I first looked up in awe at the north face of the Eiger, Mattenberg and Wetterhorn from Grindelwald back in 2010. I probably laid eyes on Shrekhorn too!

It looks epic up there and you look like you were loving it, no wonder, proper big mountain fun!

Congrats on your 4000er compleation!

Chris Mac wrote:I love seeing the big Swiss hills in any report after I first looked up in awe at the north face of the Eiger, Mattenberg and Wetterhorn from Grindelwald back in 2010. I probably laid eyes on Shrekhorn too!

It looks epic up there and you look like you were loving it, no wonder, proper big mountain fun!

Congrats on your 4000er compleation!