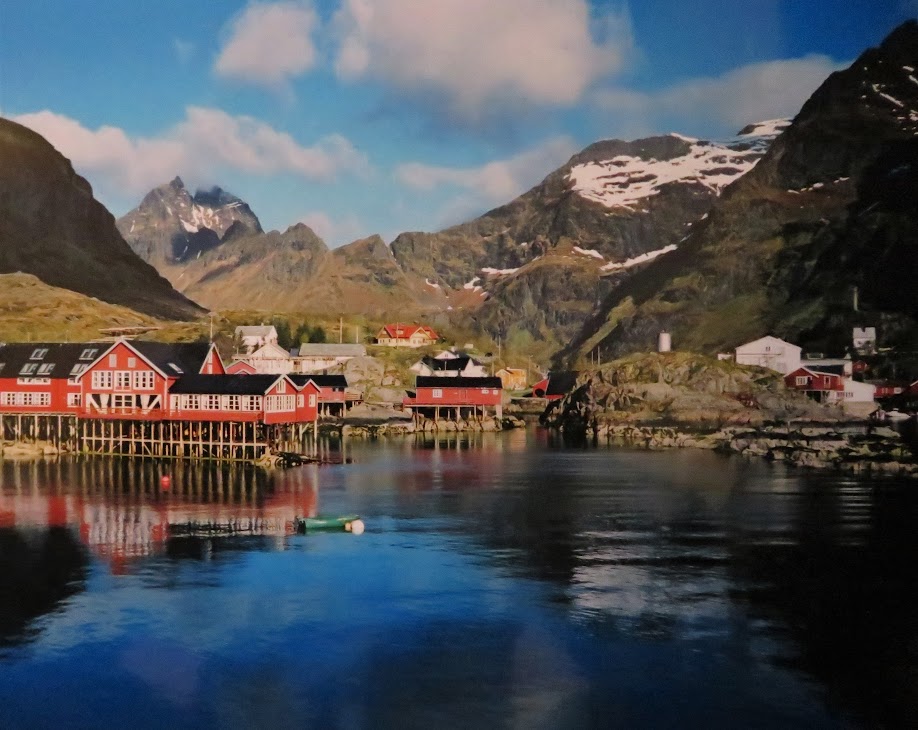 The view of A that really did make me go "ooh". That's the pub on the left. 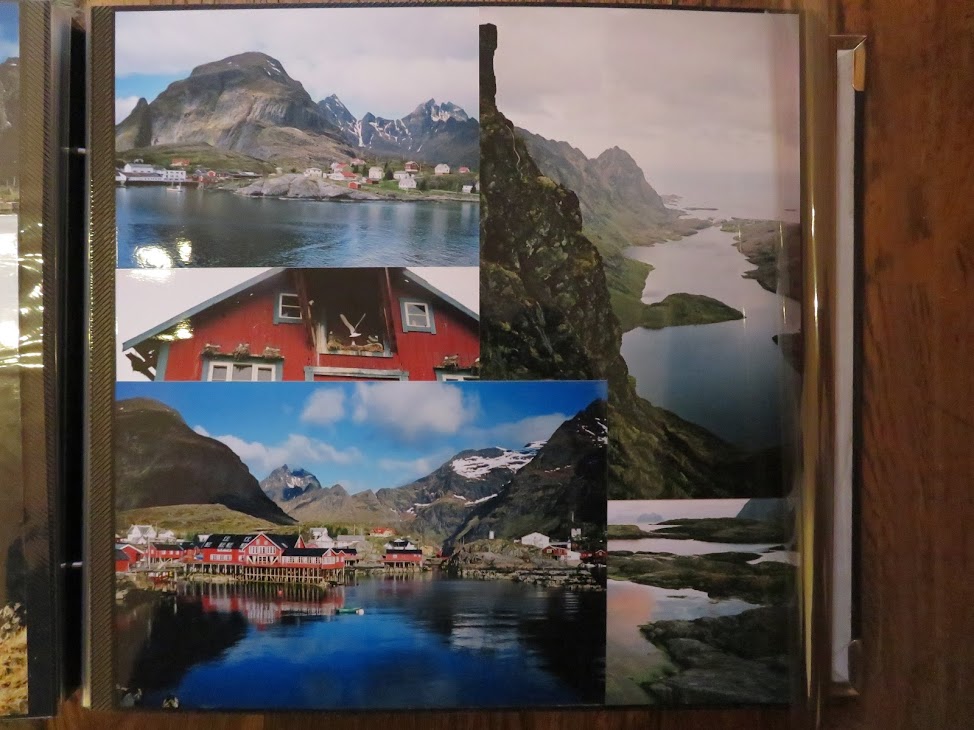 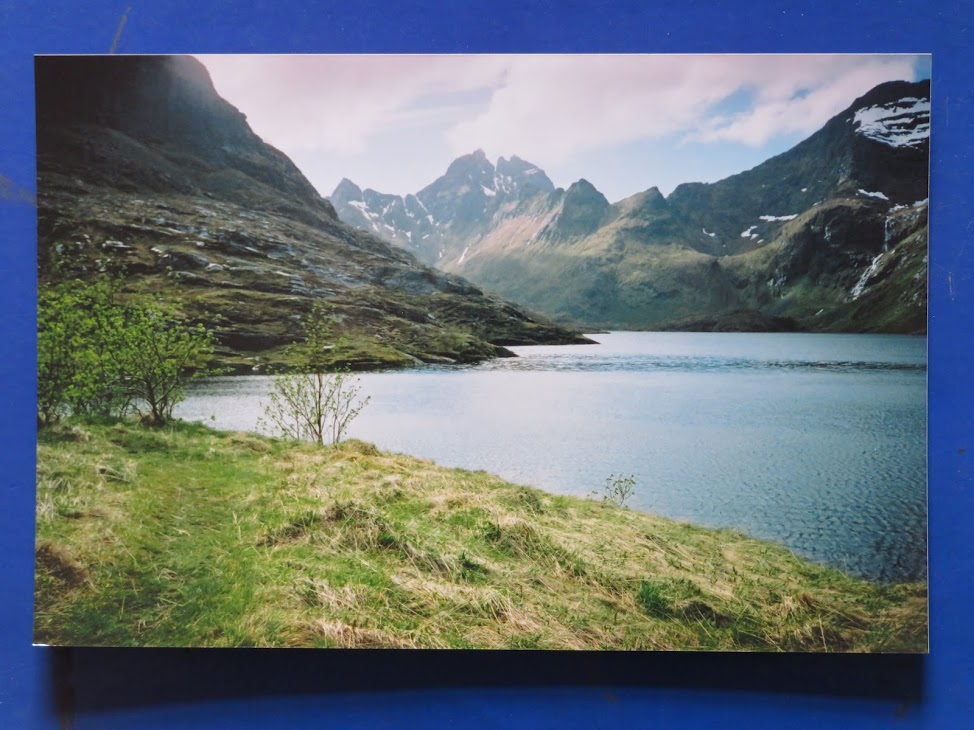 A good path beside Agvatnet but it gets quite adventurous along the way. 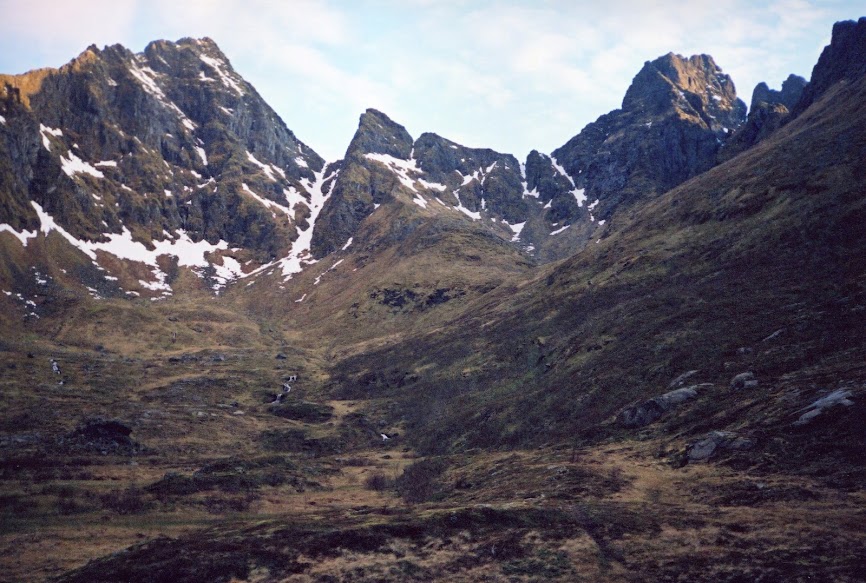 Mannen (left) and Gjertindan to the south west. 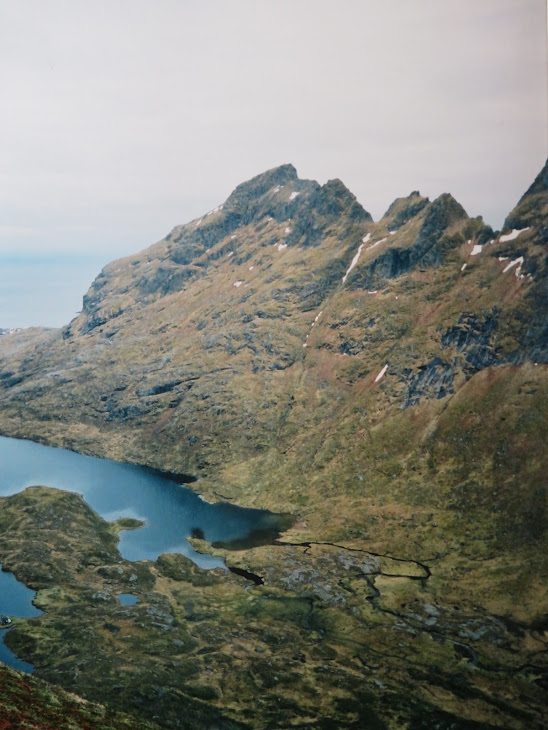 On the way up the zig-zags to the bealach or whatever that is in Norwegian. 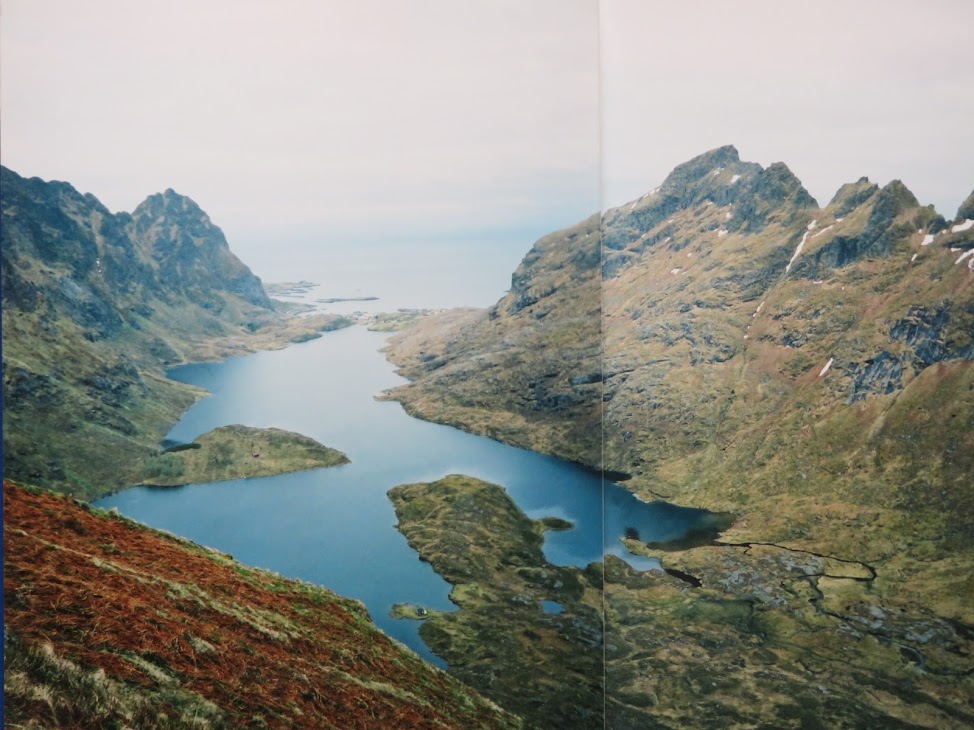 The village of A (pronounced "ooh", not "ah") at the head of the loch. Ah, I hear you say. Or possibly not. 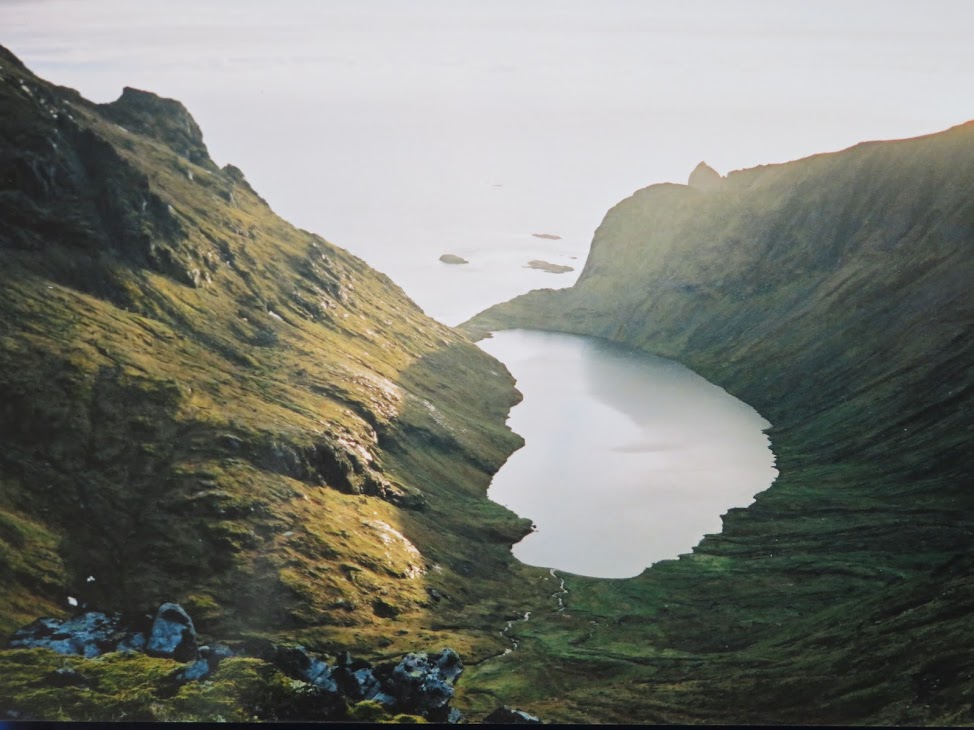 View to the west coast. From here I could look up the south ridge of Mengelsdalstinden (will add photo when I find it -in an album somewhere) BUT I got really unnerved about ascending after going just a short distance. It was steep and exposed and wet grass without a path there. Later I discovered that someone had died there the week before. A bullet dodged I wonder. It's the right hand ridge line on the first pic. Doesn't look much but a slip either side and you are not going to stop very easily. 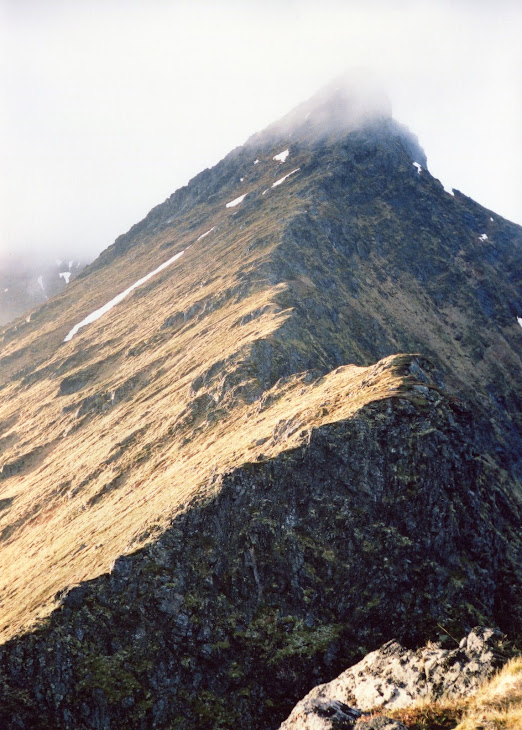 The uninviting (to me) ridge. 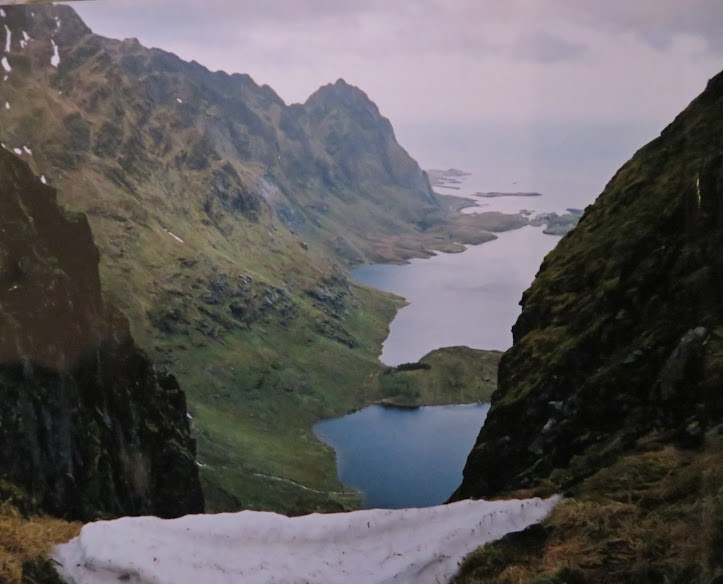 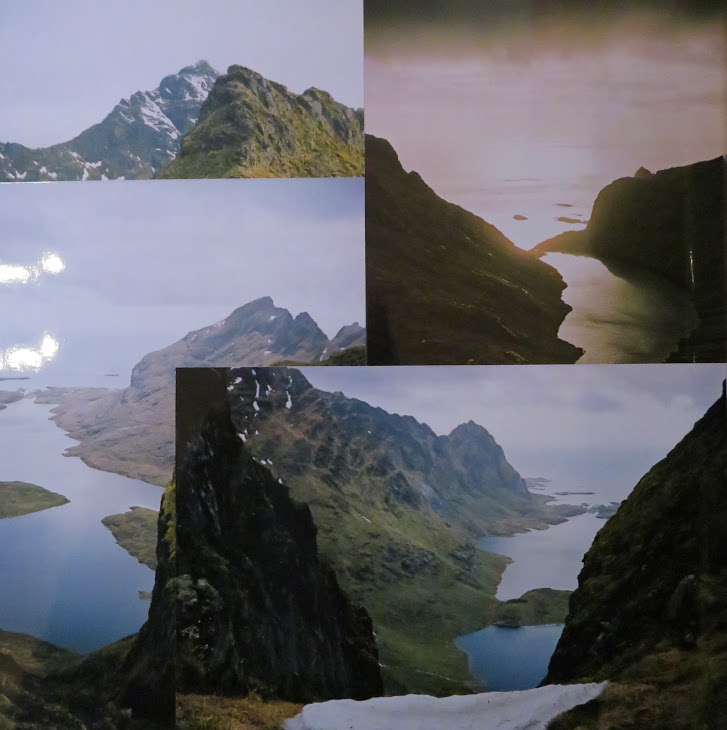 map -if you go south a bit.

Now that I've looked at the map again that ridge to Mengelsdalstinden seems even more off-putting as it is labelled skytefelt, apparently meaning artillery range. I also recall remarking to someone after I got back from this ten day trip that it was never very relaxing on the hill tops as there is such a high proportion of steep ground compared to Scottish hills.

I thought I recognised the first photo! We camped at A (pronounced Ooh!), many many years ago

Nice! Have you been watching Twin on BBC4? Reine, Svolvaer and Unstad beach all feature heavily.

I've not seen it but thanks for pointing it out. Now I have to reconnect my catch up tv but I can't get the wps button to work, I don't have an ethernet cable and I probably can't remember what I reset the broadband password to. So it may take some time.

HalfManHalfTitanium wrote:I thought I recognised the first photo! We camped at A (pronounced Ooh!), many many years ago

Do any walking from there?
I have a better photo of the same scene but with the pub and fishing huts in front.
Also just remembered that I discovered A to be a bit feudal. The guy who ran the A hostel back then, or possibly one of his serfs, pointed out that he owned most of the village too.

Added a bit. Found the photo of A I was looking for but had to take a photo of it as I'd have to peel it out of its album if I wanted to scan it which would basically ruin the photo so I guess it's stuck in there for good. I do have hundreds of unsorted negatives so that would give me something else to do.

Twin was great but disappointed that no-one climbed any hills.

I somehow missed this first time around, but now I've looked at it, it was all "ooh" and "ah". Absolutely stunning!

PS I think your care with long steep wet grassy slopes is well founded - at least, I share your concern about the potential for long, unplanned, rapidly accelerating journeys!!

Alteknacker wrote:I somehow missed this first time around, but now I've looked at it, it was all "ooh" and "ah". Absolutely stunning!

PS I think your care with long steep wet grassy slopes is well founded - at least, I share your concern about the potential for long, unplanned, rapidly accelerating journeys!!

Scrambler's paradise. When dry, of course!