After more than two months of lockdown here in Brussels I am seriously missing the hills. Back in February, Covid 19 was just on the horizon and I still hoped that I might get some proper winter days in either Scotland or the Alps. As we all know now, ‘twas not to be. In retrospect, winter 2019/2020 has been my least active in a long time. Towards the end of November 2019 I visited my folks in North Worcestershire and managed a day in the Berwyns, ticking off my last two Hewits in that range. In mid-February this year, I was back at my folks again for several days – this time with Mrs Riverman as well. I had hoped to get up to Scotland for a few days but storms were lashing the land so I settled instead for a quick jaunt on the Long Mynd, together with Mrs R and (though we didn’t know it at the time) a third climber too

At the northern end of the Berwyns, Moel Fferna and Moel yr Henfaes were my last two Hewitts in the range. Most reports are unflattering and to be honest I had been putting off this pair. On paper, their only real virtue seemed to be proximity to my parents house. I parked behind the pub and shops in Cynwyd and followed the route in the Nuttalls book. It was fairly misty on the hill and once I broke out of the forestry onto open hillside, the most obvious track (which I mistakenly followed) climbed north to a small top. Realising my error, I retraced my steps and continued eastwards. The top of Moel Fferna is unremarkable and even more so on such a grey day. Bleak doesn’t even begin to describe it. 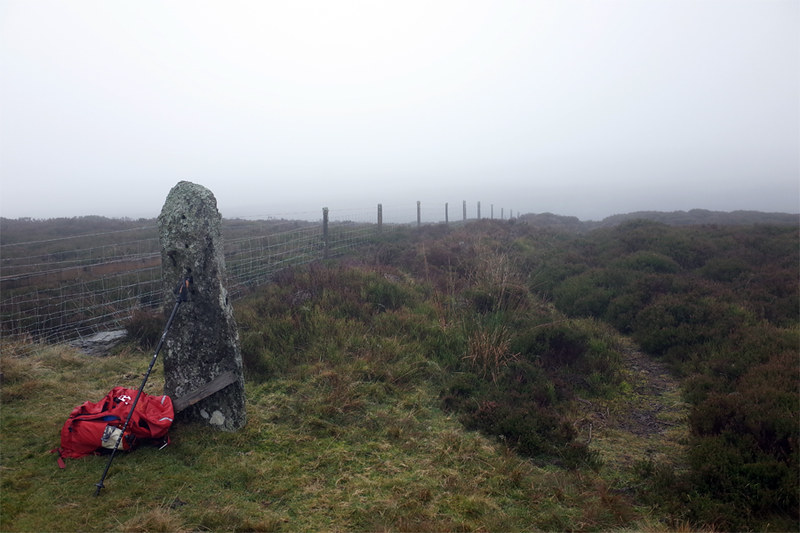 Near the top of Moel Fferna

Not wishing to hang around, I tacked south, easily following the boundary line towards the second top. This was actually a fairly pleasant section of the walk, and not nearly as boggy as I had been led to expect. Shortly after crossing Pen Bwlch Llandrillo Top I found my way to the track that would lead me all the way back to the car. I did not detour to the Wayfarers memorial just to the south east of the summit. On the way back to Cynwyd the sky brightened a little and put a spring in my step. Over the entire six hour walk I had not encountered a single soul. This has often been my experience in this part of Wales. If you’re looking for some post-lockdown social distancing, I’d highly recommend the Berwyns! It’s easy to dismiss them as boring hills but every time I’ve been, I’ve enjoyed the quiet and solitude as much as any day in Scotland or the Alps. 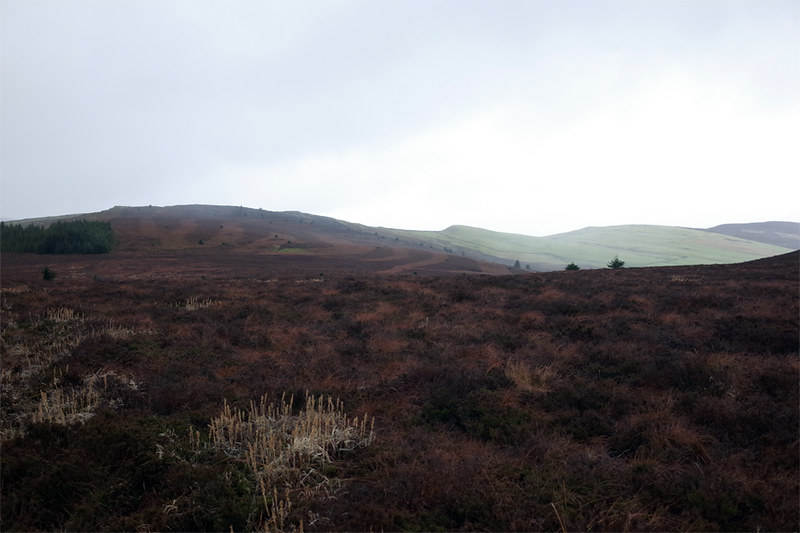 The Berwyns were made for social distancing! 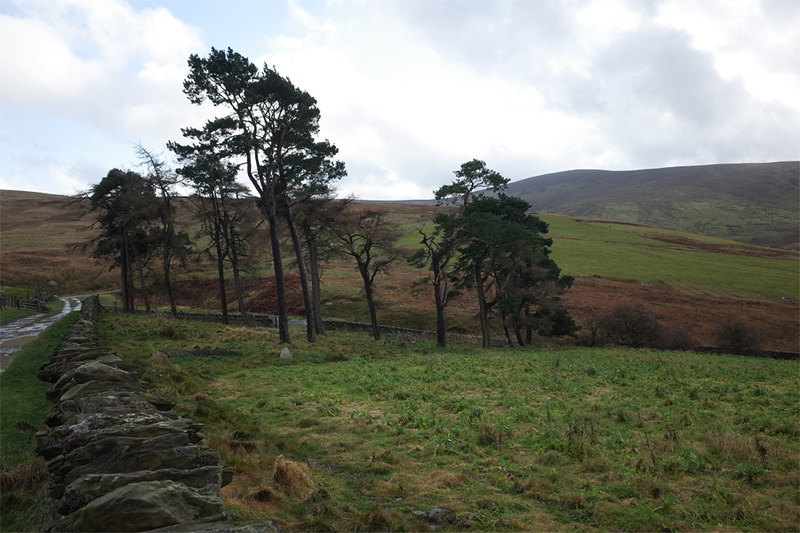 Looking back up the hill on the way back to Cynwyd 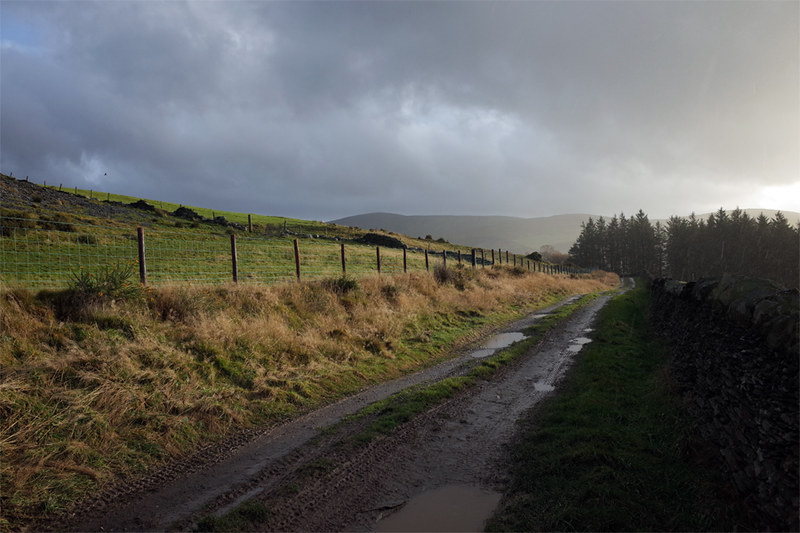 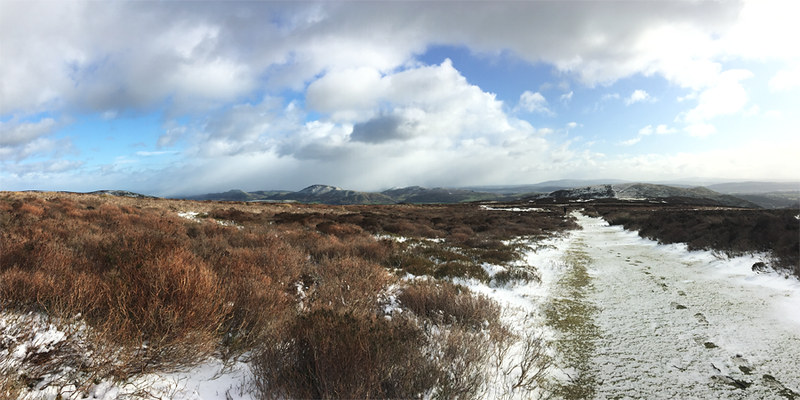 Womb with a view!

In early February my wife and I travelled from Belgium to visit family in the Midlands. The main purpose of the trip was to meet my niece, who was born a few days before Christmas. With a week to play with, I had also hoped to get up to Scotland for a few days but as the departure date approached, much of the UK was being lashed by storms. Also, crunching the numbers on Birmingham to Inverness flights and car rental I realised that even to put myself in Scotland for a few days would cost several hundred pounds. Amidst such uncertain conditions it just didn’t seem worth it.

So instead, on 11 February, my mum drove my wife and I out to Church Stretton from where we could get onto the Long Mynd. Mum dropped us off at the Carding Mill valley car park and agreed to meet us in three hours. My wife and I bounded off up the valley and onto the hillside in a bitterly cold breeze. Mrs Riverman hadn’t brought her hiking gear from Belgium and so was clad only in her winter running kit and a long overcoat borrowed from my Mum.

I think the last time I had been on the Long Mynd was probably in the mid-1990s when, for my GCSE Geography, I had had to complete a piece of coursework on hill-farming. It’s beautiful countryside and easy to see why it became a favourite place of escape for folk living in the industrial West Midlands. Today it was particularly scenic, with a light dusting of snow on the top and splendid views over to Caer Caradoc and the Wrekin.

We made good time and were back at the Carding Mill valley car park in well under three hours. Fortunately, mum had arrived early so we could immediately get into the car and escape the chill. During the walk Mrs Riverman had been feeling nauseous. At the time, she put it down to the early wake up and rushed breakfast. We know now that it was in fact her first bout of morning sickness! Later that week, while overnighting in London before our return to Brussels, a Boots pregnancy test confirmed it! I’m pleased that our first child has already been up a hill, and a quality one at that!

And so, with the exception of a Wallonian hike with the Belgium Alpine Club in early January, that’s really the sum of my winter adventures this season. It doesn’t really compare with previous years but in retrospect was extremely precious all the same. A last taste of the outdoors before lockdown hit. Who knows when we’ll be able to get out again? Hopefully not before too long! I don’t know about you but I need my time on the hill.


Northernberwyns.GPX Open full screen  NB: Walkhighlands is not responsible for the accuracy of gpx files in users posts

Now with GPS track for the Northern Berwyns

Congratulations on the coming addition to the Riverman family!

Alteknacker wrote:Congratulations on the coming addition to the Riverman family!

Thanks AK! Hope you're well. Still thinking about a trip to the Alps? If not this year then next?