From the 29th August until the 2nd September I was up in Snowdonia on a mountaineering course covering more advanced (grade 2 and 3) scrambling. I was hoping this would give me the confidence and techniques to tackle at least grade 2 terrain on my own, and increase my choice of routes up some of the UK hills/mountains.

It didn't quite live up to expectation.

I arrived there Friday evening in rain, pitched my tent at a campsite near Capel Curig which I found out had been underwater the week before (hence why the ground went squelch under my feet), which didn't surprise me as I knew it had been very wet up there. This was an opportunity to try out my new lightweight camping gear:

Even though I hadn't tried pitching the tent at home, I had no problem because it pitched exactly the same way as my old Zephyrox 2 man tent. This gear is a significant improvement on my old gear in terms of weight, very noticeable how much lighter the backpack felt with it all in.

Saturday morning was for first day of the course, meet at a nearby cafe then off to Ogwen valley to take a route up the east side of Tryfan. Weather dry with sunny intervals. First thing I learnt was how to improve my walking technique. I tend to go too fast at the beginning, and it is better to go at a steady pace and minimise stoppages, which is a more efficient way of moving. The instructor had us (there was one other on the course) put two stones on the top of our hands and the aim was to walk so that the stones didn't fall off. This was an exercise in balance, planning where to put your feet on rough ground, and putting your nose over your toes before pushing up when ascending.

We eventually walked up to the beginning of a gully where the scrambling started. We had to get tied in, which meant me trying to tie knots I had practiced in the comfort of my lounge, but somehow couldn't get to grips with in the field, so the instructor ended up tieing me in. The format was the instructor leads, climbs to a place where he can secure the rope, puts these wires with chunck bits of metal into cracks in the rock en-route, which stop anyone falling if they slip, one of us it tied on the end with a figure of eight rethreaded, and one is tied a few meters from the end with a couple of overhand knots. The first move required having to get up a rock a couple of meters high with rocks either side, and the only way I could see to do it was to jam feet onto the sides and try to vertically walk up a short distance, then find a handhold and foothold to lift myself up. The instructor and the lady managed, I was shite, and had to take an alternative route to get up. This kind of set the tone, when I was climbing the instructor was forever telling my to breathe deeply. This was because I was shaking on the ascents, and the fear was causing me to try and desperately scrabble up rocks instead of looking for the holds, which is a ten times harder way of climbing. The route we took eventually brought us onto the north face route just below the tower, we didn't carry on to the summit, at this point we headed back down.

Sunday: Headed back to the Ogwen valley, this time a grade 2 scramble starting near the south end of Llyn Iowal. I initially didn't feel any effects from the previous days exhertion but it became apparent on the walk in that I was physically weaker than the prevoius day, and I didn't feel 100% well, I had feelings of an upset stomach. I did think about bailing out but decided to push on a]nd do my best. This again involved rope work and during the scramble we were taught belaying. I didn't have any fails on this route other than I need to control my breathing and slow down so the instructor can keep tension in the rope. When I feel a tug on the rope my instinct was to move faster, which is exactly the wrong thing to do, because then the leader has to move faster to keep the tension, and a horrible positive feedback can occur. I'm still not grasping the knots or tieing in so was feeling a bit stupid at this stage. In the evening I had a bout of diarrhea, so I evidently had picked up a bug somewhere. I did manage to get a decent meal down me.

Monday: This was an easier day physically. We went to little Tryfan which is like a minature version of Tryfan with a slam of rock at a steep angle ideal for climbing. There were tons of other people there (bank holiday, sunny weather, what else?). We did a grade 3 route up the slab to a ledge, then abseiled back down. We took another route to the top of the ridge and made it to the summit before taking a walking route back down.

Tuesday, and another beautiful sunny start to the day. How lucky that this course has coincided exactly with fouir consecutive days of decent weather. This day consisted of a grade 2 scramble along a shoulder which leads up to the summit of Y Garn (947m). The most difficult move was at the beginning having to go up, then swing to the side using solidified gas bubbles (an interesting geological feature) on the rock as holds before continuing up. I didn't find this move too difficult (i.e. I managed it), but the roughness of the rock gave me confidence which helped. This was similar rope work and scrambling as the previous days, and we made it to the ridge and walked to the summit from where there are fine views of the Ogwen valley, the coast, and Snowdon.

Wednesday marked a change in the weather to frontal rain coming in and lasting most of the day, and this was the last day, so we did a half day scramble on a grade 1 route near Penmaenmawr. The route started at a caravan site at Dwygyflch and followed a rocky ridge most of the way. As the rock is limestone and thus gets slippery when wet, we were roped up even though this was technically an easier scramble. No real problems getting up, apart from my waterproof jacket giving up so I got very wet, fortunately it was mild rain, not cold rain. It took about three hours to do this scramble and get back down to the car. It was at the end of this scramble that it finally clicked in my head how we all get tied in and how the safety proceedures work, so I can now visualise in my head how three people rope up and move. That was the end of the course, so I headed to Salford to stay with my father for a few days.

The course was excellent, the instructor was brilliant, very patient with me despite being the idiot in the group. The whole experience has said to me that I have no business doing anything other than walkers or grade 1 routes up hills, as I found it nervewracking enough with a rope to stop me falling, I can't imagine ever doing those grade 2 routes solo with just my hands and feet. If I do anything like that again, I will need to get some better boots. My boot soles were very flexible, which makes it harder to put a toe in a foothold, the sole flexes and myt foot slips out of the hold.

I can confirm my kit worked very well. It kept the rain off me and I was warm enough despite temperatures dropping well down into single figures overnight. I had a bit of condensation in the tent but that is to be expected when there is mist early morning and a heavy dew on the grass. 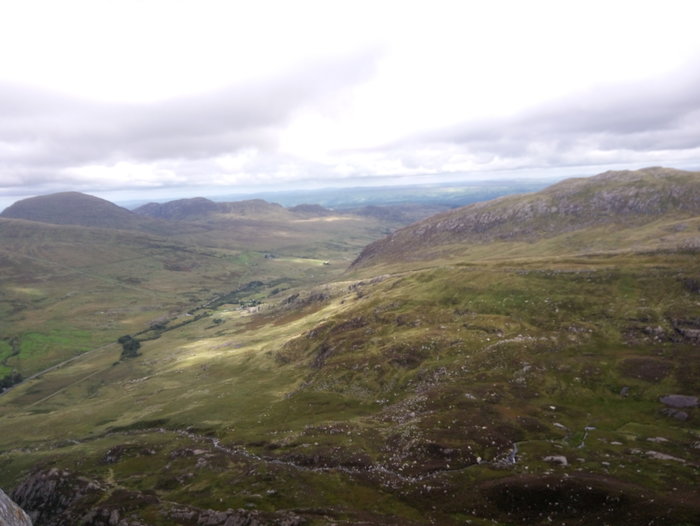 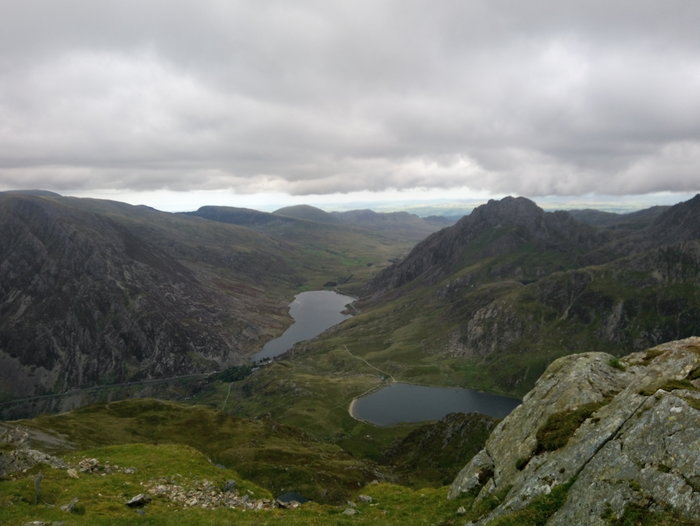 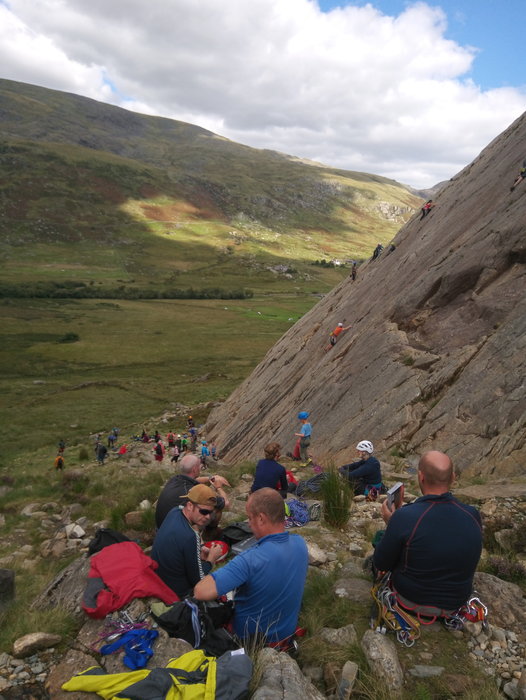 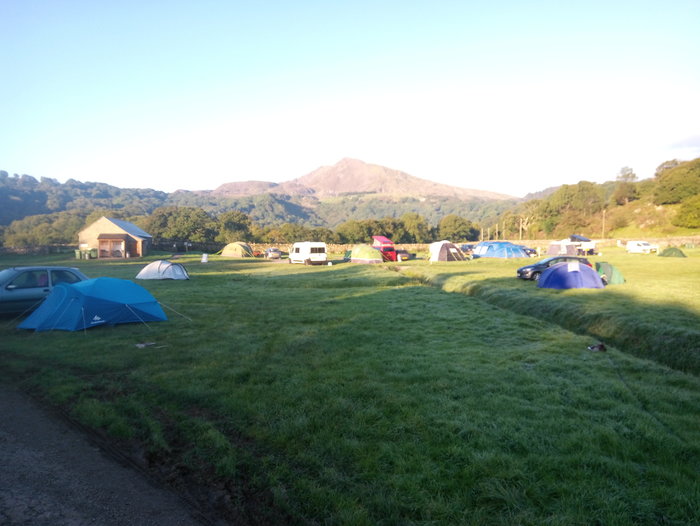 Nice report. I was waiting for the bit where you justify calling yourself an 'idiot' but it never came. Sounds like you did everything right

Pointless Parasite wrote:Nice report. I was waiting for the bit where you justify calling yourself an 'idiot' but it never came. Sounds like you did everything right

I felt like an idiot for the first three days because I struggled to pick up the knots and the tieing in, plus I periodically was panic scrambling due to the perception of danger (which isn't there because I am tied in, but sometimes overriding perception with logic is difficult). The lady I was with picked it up much quicker than me. It reminded me of Karl Pilkington when he got thrown out of his comfort zone and looked completely lost at times in overseas countries being put in difficult/awkward situations (An Idiot Abroad).

The instructor was very good and patient with me. He said it is a case of unfamiliarity, and to get over my difficulties I just have to keep doing it, and it is like trying anything you've never done before.

Great report! I think we all have an inner Carl Pilkington, he just comes out in different situations. For me, it was ice climbing, but I stuck at over a few years and ended up as OK on easier routes.

I also think your approach is very sensible. Many many years ago, as soon as I could drive, I would take off to North Wales whenever I got the chance and try an “interesting” route on Tryfan, Cwm Glas, Glyders etc. Solo, no rope or protection, no training, and some seriously scary (but admittedly awe-inspiring) places. Thinking back, I am lucky to be still alive.

Since then I have done big stuff abroad - and now, with an artificial knee, I mostly just have the odd week in Scotland.

One thing I have found over that past few years is that the technical difficult of the easiest ways to the mainland Scottish peaks (subject of course to weather!) is easier than I expected.

There are far more knowledgeable people than me - but my personal impression is that most mainland peaks have at least one way to the top that is a walk or at most a grade 1 scramble - comparable to say Striding Edge, but easier than Crib Goch. For example the two Aonach Eagach summits can be reached separately, by walking routes. I think the Scottish hills are perfect for those of us who don’t want to risk life and limb any more!