Add reviews of outdoor gear and equipment here... or simply chat about gear and ask for recommendations
Post a reply
4 posts • Page 1 of 1

I bought this tent at the beginning of the summer, have now spent the best part of a month with it, and think I have enough experience with it to provide some opinions. I've worn out a lot of tents over the course of my life, starting with a Saunders Jetpacker (remember those?!). I also have a Vaude Taurus 2-person tent, bought during happier, more optimistic times and now pretty much a summer tent (good tent, and one that withstood a lot of weather; lousy customer service) and the Terra Nova Voyager 2 I bought to replace it (great, but better suited to trekking with a companion, which I no longer have).

So, the Terra Nova Laser Competition 1.

This is a one-person tent, weighing just under a kilo, rated for three-season use. TN claim that it can sleep two, but I would say that you would need to love each other deeply for this to be viable. It has a hydrostatic head of 5000mm. The 5-minute pitching estimate from TN is, in my experience, pretty accurate, although I've done it in less in bad weather/predation (midge!) conditions. It retails for something in the region of £280 (some retailers charge considerably more: be cautious!).

Aside from some odd days here and there, I have carried it from Pitlochry to Forres via the Cairngorms and the Dava Way (in June; 5 nights), the entire length of the Outer Hebrides (in July; 15 nights counting an overnight in a backpackers and the return) and from Milngavie to Pitlochry via the Rob Roy Way (in November; 5 nights, allowing one night under a roof in Callander).

I like this tent for its tiny ground profile (100cm high, 220 cm long, 143cm wide). Its small packed size means you can sort your rucksack before you take the tent down. I carry it strapped to the outside of the rucksack. I've pitched it on woodbanks and in ravines that would simply not have been able to accommodate the Voyager. 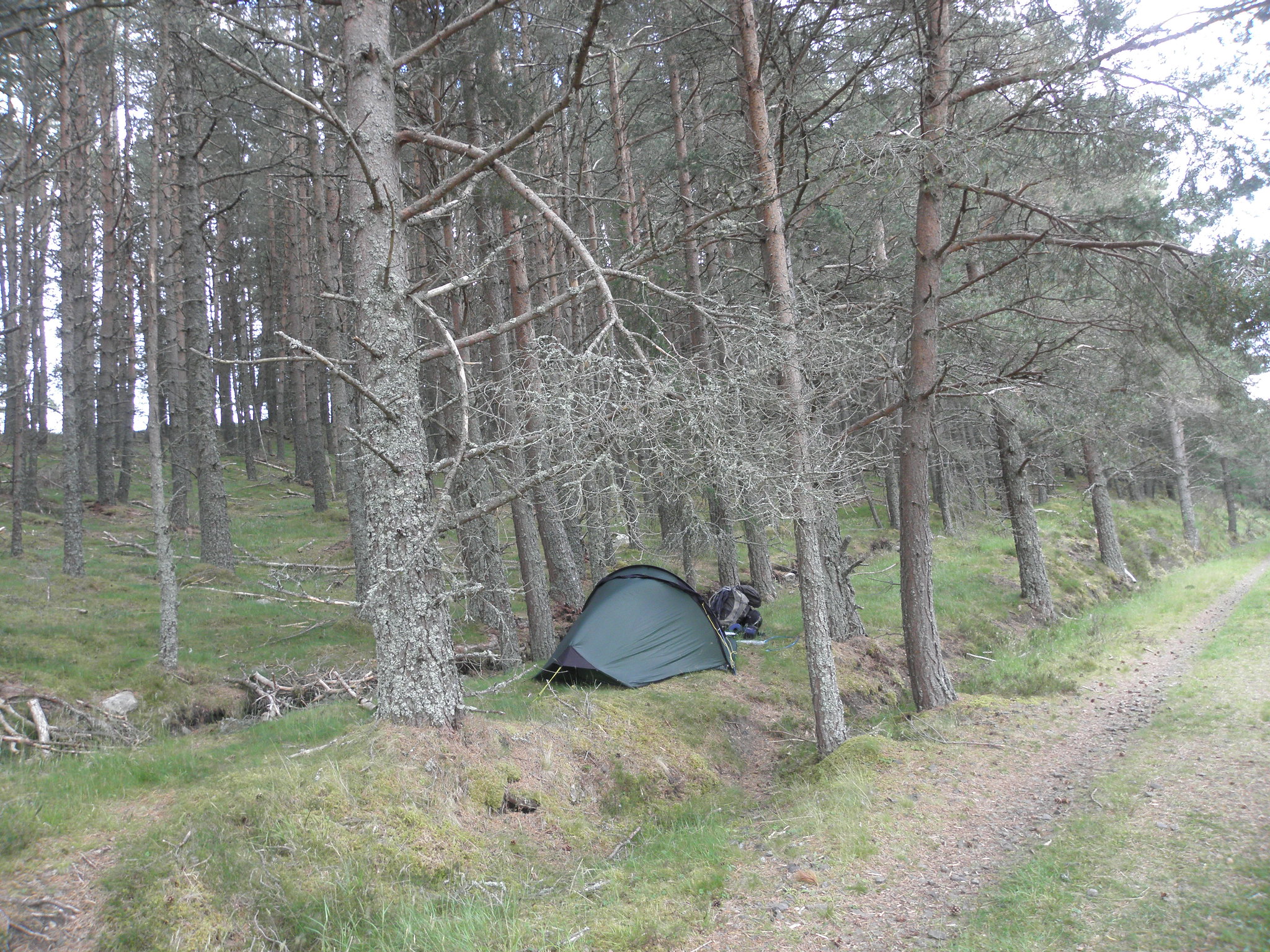 Stuck on a woodbank on the Dava Way. 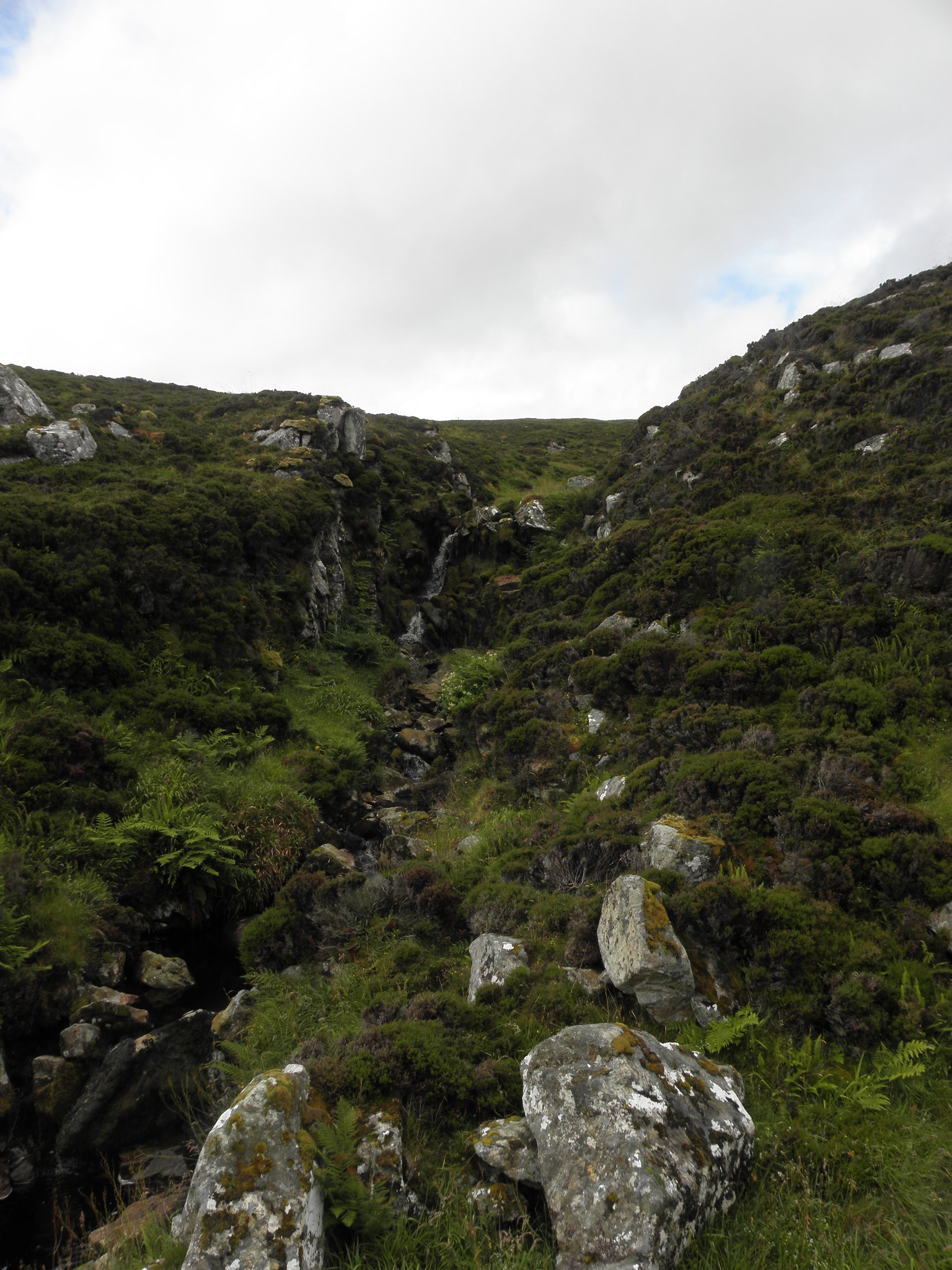 I did have the tent pitched for shelter in this ravine on the north end of Lewis. There was no way it would have accommodated the Voyager.

There are two aspects to the other side of that coin. One is that some might consider it downright claustrophobic. I'm pretty short (164cm), and anyone much taller than me would have their head squeezed right up against the very low (40cm) end of the tent. The other problem is the huge condensation profile. There are ventilation panels (with midge-netting) at each end but, unless it's breezy, even with these vents open condensation builds up very fast. My experience is that the drip point is directly above your face. I've stayed considerably dryer on wet, breezy nights than on humid still ones.

A reasonable porch area means that I've been able to stow the rucksack while using the natural gas stove under shelter, although I wouldn't want to risk doing the initial priming of my liquid-fuel stove here.

Unlike the Voyager, this tent pitches outer first, so can be pitched in one go.

The tent comes with three poles, of which the two end ones can be left in place, which assists with rolling. The end guy lines present a surmountable problem. Plastic clips seem to be intended to hold the guys taught, but they have a tendency to slip in any more than a light breeze, allowing the inner and outer to touch, with inevitable consequences. My solution to this has been to tighten the line, check the skins are not in contact, then tie the line off round the peg. At that point, the rain stays out.

The centre arch cannot be seam-sealed, so a sleeve protects this from rain. Three tie points connect this to the tent, and it's then guyed out. These tie points are definitely weak, and I've had to repair the sleeve once already.

With all the pegs in place, the tent is pretty stable in even a high wind, as I found one night at the southern entrance to the Lairig Ghru. One peg did pull out in a strong gust, but it was poorly inserted in what felt like glacial till. The tent coped with this – not well, but it did stay up. 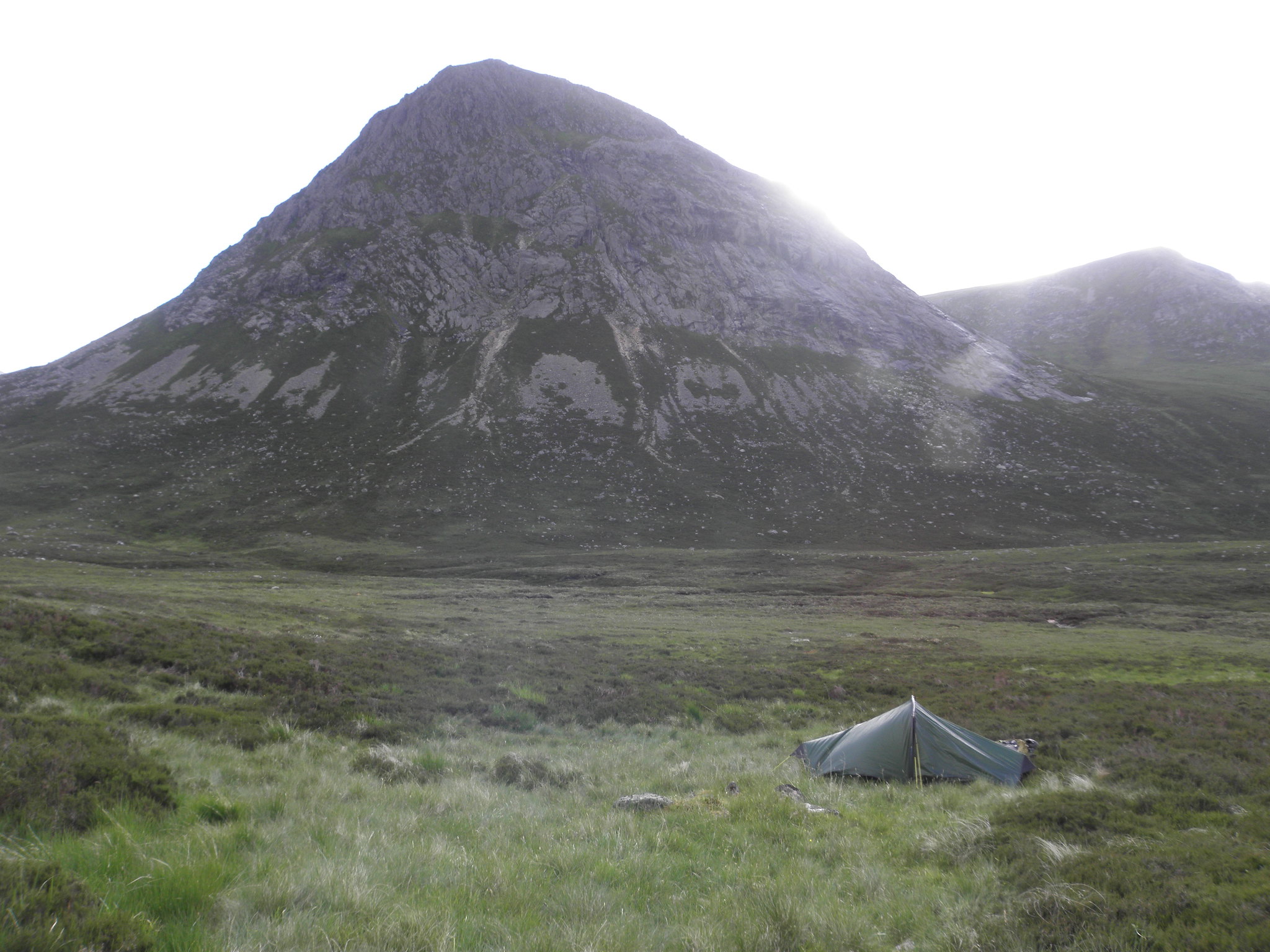 A somewhat exposed site on the De'il's Ba's.

In conclusion, this is a good tent for one person while hiking. It is not a great tent, the main problem being condensation. There probably are better one-person tents on the market, with similar ground profiles and greater storm resistance, but they're in a much higher price bracket. I also think that low-level hiking in November is probably a limit. It did stand up to some unpleasant conditions in the Cairngorms, but it's not bombproof.

The laser comp is a good tent with a great rep, and it has it's uses.

I've heard that at trail running meets its just fields full of of laser comps, dozens of them, as that's what the runners use. for the absolute minimalist it's ok, if your packing a 30L bag for an overnighter and you're just basically looking for somewhere weatherproof to sleep, then the laser comp is bang on.

But comfier tents are available at similar weights, and if your going on a multi-day trip then comfyness can be important for keeping up morale. Sitting out a downpour in a laser comp would be really tedious imo, whilst I wouldn't really mind that in a 2man MSR elixar, and it's about 1.6k which is comparible with the real packed weight of the laser comp.

The elixar is just one example of a comfier tent in a similar weight class, there is a big market for ultralight backpacking tents so all the big brands do variations on the theme.

I have had the laser comp 1 for 4 years now. Been a good backpacking tent but I concur with the condensation issues. I find it almost impossible, even with all the internal adjustments, to get a good pitch with a bit of space between inner and outer tents and consequently get condensation dripping and find that once getting up unless the inner tent is zipped shut everything gets wet. Mind you I previously owned a MSR Microzoid which was horrendous when damp as your back got soaked when crawling out.

I replaced the pegs and guide lines on mine for more substantial ones.

I had to get the Flysheet zip replaced in April this year at a cost of £60 by Terra Nova. It was bought through sports Direct initially so is not covered by the Terra Nova guarantee. Unfortunately the replaced zip has broken after about 20 nights usage. In my view the zip area is a design flaw. To get the perfect pitch too much strain is placed on the zip. Once repaired again I intend to put in a band to the bottom of the zip area and peg it out and let the peg take the strain.

Incidentally for the second repair I have bought a heavy duty zip and taken it to a local seamstress, who has repaired tents before and who described the Terra Nova repair zip as the flimsiest, cheapest zip she had seen in a while. I haven't spoken to Terra Nova about it, ill just get it repaired at a cost far cheaper than a Terra Nova repair

I have recently bought a Force 10 Helium 2, which I think is very similar to the Laser (I bought a 2 because the weight difference between the 1 and 2 is miniscule, and there just isn't enough room for my liking in 1-man tents). I paid about £180 for it, if I remember correctly. I chose it after a pretty long period of research.

I've used it a few times, and my main complaint has been the difficulty of setting it so that it doesn't flap. Checking this out on various forums, it seems that there's quite an art to getting it right, which I clearly have not yet cracked! I need to spend a bit of time practicing on the back lawn, not in the dark when I'm just desperate to get to bed!!

I haven't found condensation any worse than other tents, but then I haven't used it in still humid conditions. It does have a number of very desirable features, like being a pitch-in-one design (and therefore pitchable in the rain), very quick to pitch (I agree with the 5 minutes estimate) and weighing only 1.1kg (measured by me). I took the view that the materials would all be lightweight and only moderately robust, so I'm treating it with care in the hope that nothing will give too soon!

I wouldn't like to try it in high wind, but then I'm not sure any really lightweight tent would manage high winds.