Thursday- arrival at Dunbar
As the trains were so expensive we decided to drive to Dunbar after work and leave the car there while we cycled back. We stayed the night at the Dolphin Inn which is highly recommended. Unfortunately we arrived quite late so just had time for a quick evening stroll around Dunbar.

Friday - Helensburgh to Falkirk
We got up early and caught the 7am train to Helensburgh. The trains were quiet even passing through Edinburgh at rush hour. Must have been due to Covid but it made it easier to negotiate the bikes. It started raining just as we were arriving in Helensburgh. We made it out from the station and went to the seafront to take the obligatory setting off photo then it was a cycle off up the hill to get us warmed up! The route to Loch Lomond was easy enough. Although we were in main roads it didn’t feel like it due to the well designed cycle track and pleasant views. The only problem was there had obviously been some very heavy rain in the night and there were times where we were soaked by inconsiderate car drivers! 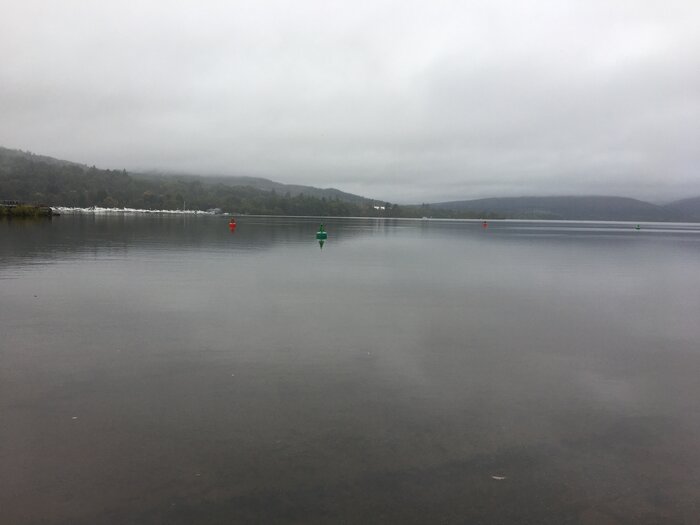 It felt good to arrive at Loch Lomond, first waypoint checked off. We stopped for a second breakfast in a cheap cafe and admired the views as we tootled along the Loch side. We then went up a surprisingly steep path past Balloch castle and then along a lovely section on quiet lanes with nice views. The weather picked up at this point as well. We then started out along the west highland way and cycled past a lot of tired looking walkers with big backpacks walking the opposite direction . This section would have been really nice had it not been raining so much. The track was incredibly muddy and for some reason the massive puddles had been filled with black bin bags one of which got caught around my wheel causing me to fall off into a very muddy puddle and land in the stinging nettles! Luckily it was more humiliating rather than painful although it was rather embarrassing going into a cafe for lunch. Luckily there were seats outside! After more muddy tracks we entered a woody section which was lovely but then it got very steep and we ended up pushing out bikes for a while. This was hard work and while the views were wonderful it tired us out. When we reached strathblane we felt a bit demoralised when we realised how much further we had to go and were both thinking we had overestimated our fitness. Luckily the next section was on a disused railway line and was very easy going. This enabled us to make up some time and by the time we reached the canal at kirkintilloch we were back on schedule. The canal section was pleasant but we couldn’t help thinking it would be a bit tedious if we were walking. It was exciting to arrive at the Falkirk wheel. Here we took some photos and looked around before heading into Falkirk where we stayed at the premier inn. We were glad we had made it there before dark! A good first day. After a shower and a meal in the pub we were ready for an early night. 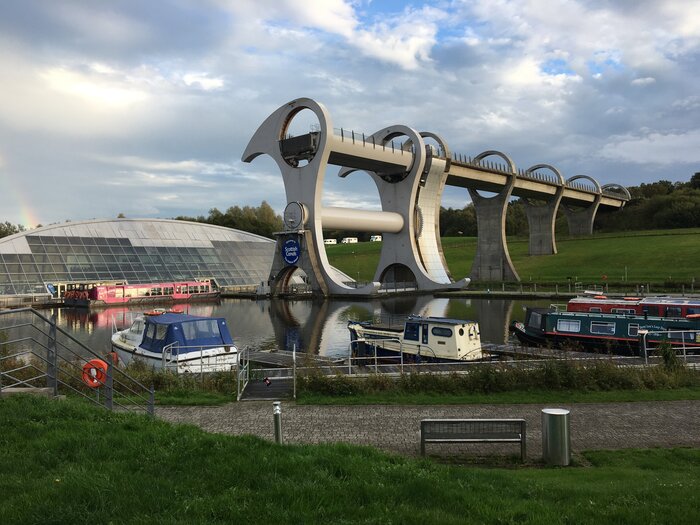 Saturday- Falkirk to Aberlady
After a quick breakfast of cereal bars and coffee we cycled through Falkirk and back onto the canal. We stopped at a handy tesco for breakfast. A few miles in we passed over an aqueduct which spanned a beautiful valley. A good opportunity for some snacks and a photo. 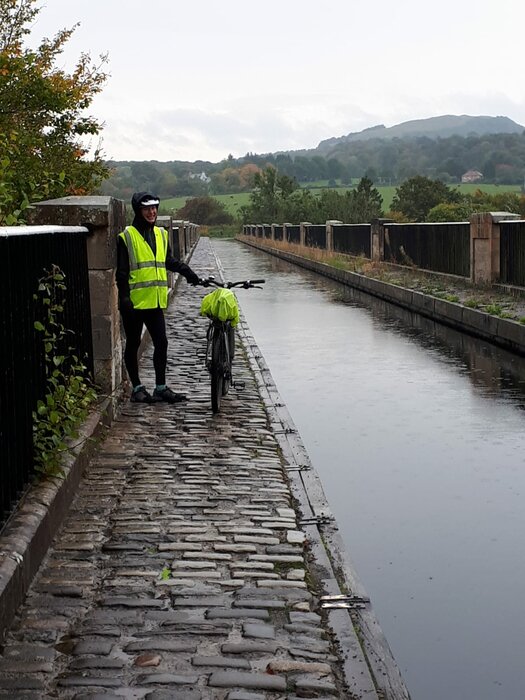 We came off the canal at Linlithgow and looking at the map it looked like there was a museum and part of the Antonine wall to stop at in Bo’ness. We hadn’t really seen any of the Roman remains so were very disappointed the museum was closed and there weren’t any walls to be seen. The rain was getting quite heavy now and Bo’ness was uninspiring. There didn’t seem to be anywhere to stop so we pushed on to Blackness castle. This was also closed although we snuck in for a quick photo. As we were too early for the pub to open we had a few snacks and cycled on. 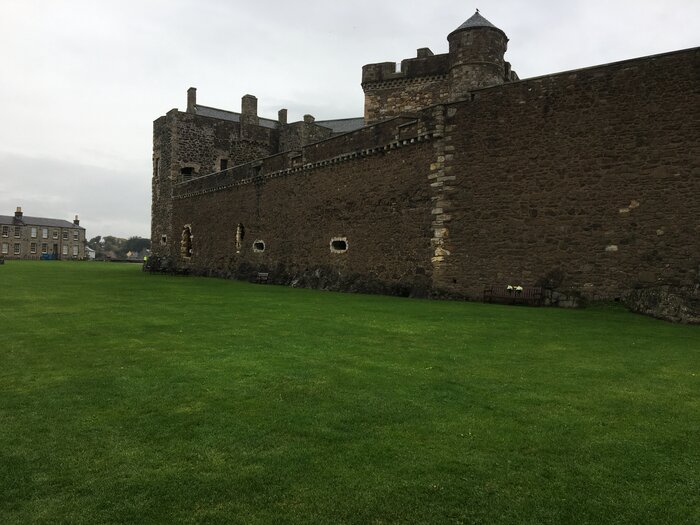 The section through the estate at Hopetoun House was very pretty but we were wet and hungry by this point. Fortunately Queensferry turned out to be a bit of a lifeline. We stopped at the first cafe looking a bit sorry for ourselves but the owner was wonderful. He refilled our bottles and we warmed ourselves up with hot soup and rolls in a little park overlooking the bridges. Further into the town we were pleased to find toilets and gorgeous views of the railway bridge. The sun even came out for us! 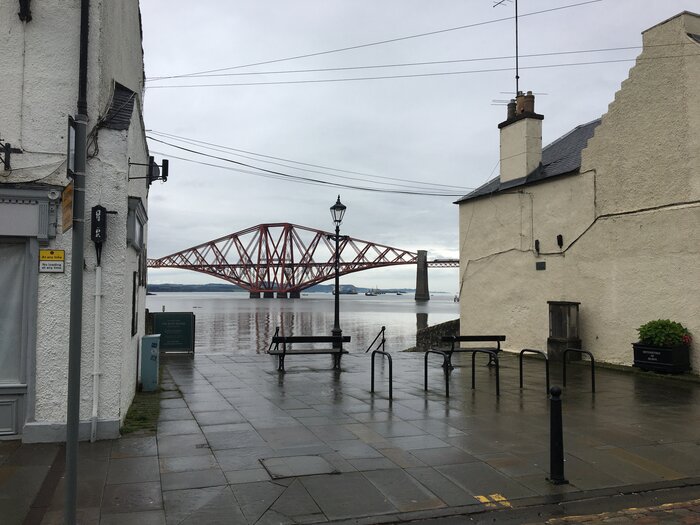 Feeling recharged we enjoyed the section through the Dalmeny estate and had a stop at one of the many small beaches. Then there was Edinburgh. I had been really looking forward to Edinburgh. We came off the official route as we wanted to see the centre so we followed route 1 into town. To be honest it was a bit of a shock dealing with so many people when we were tired and covered in mud but it was good to see the castle and the Royal mile. However it took a long time to negotiate the city and we lost the route on the way out. We managed to rejoin the trail at Musselburgh which was uninspiring or perhaps our enthusiasm was waning. We were starting to feel like we’d had enough at this point although the section along the coast road around gosforth sands was very beautiful. Looking back towards Edinburgh with the sun setting was very pretty. 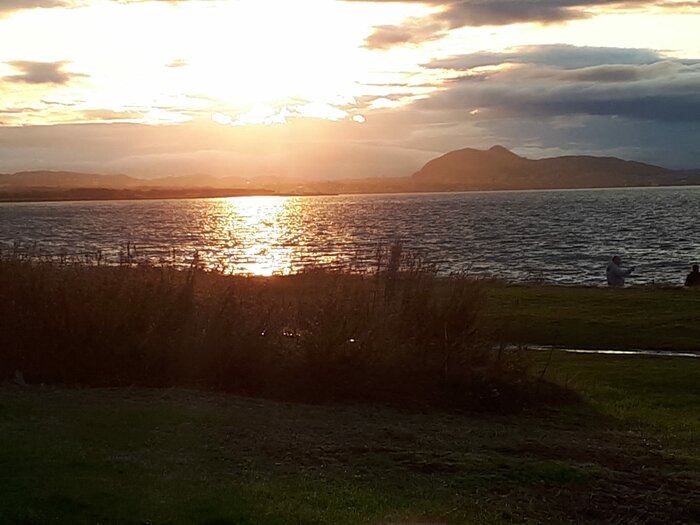 We arrived at the campsite at aberlady just after dark feeling pretty exhausted and a bit worried where we were going to eat as we couldn’t face the thought of walking back to the village. Luckily the local takeaway did delivery! The campsite was well set up with a little bothy to eat in and our camping pod was cozy and comfortable. We both slept very well! 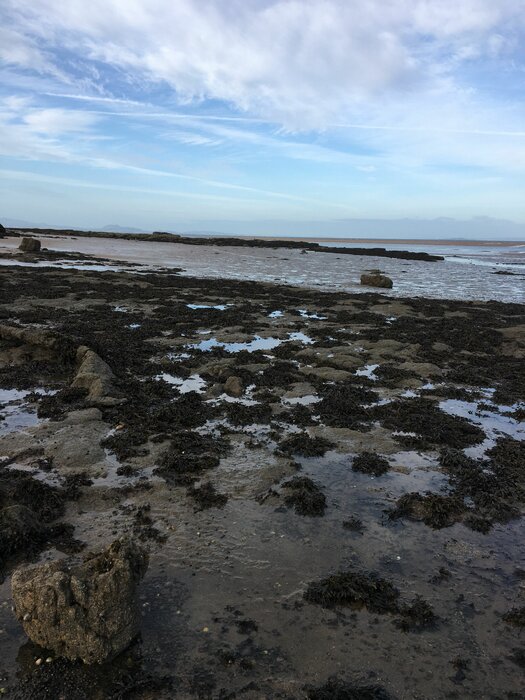 The fossil beach at aberlady

Sunday- aberlady to Dunbar
We only had just over 20 miles left to do so we knew today would be much easier and we would be able to take our time. We cycled back into aberlady and followed the road to the golf course. We left our bikes on the beach and did a bit of fossil hunting- what a success! We found loads of fossilised corals and loaded our bikes with even more weight so we had a few souvenirs! Then it was back on the road to North Berwick. What a gem! There were loads of cafes and I was excited to be able to get a full vegan breakfast which we ate on the seafront. Gorgeous views. After a quick detour to the seabird centre we were back on the trail for the last few miles back to Dunbar. We felt obliged to visit John Muirs birthplace and were delighted to realise we could get a certificate. Happy days! After a quick look round it was back to the car for the drive home. Well done us!!

Top tip- the rucksack readers book was good for inspiration but the A-Z map book was great to use on the actual ride.

Re: John Muir way by bike

Hi - I live in Bo'ness and am sorry this author found the town "uninspiring". Perhaps the wet weather didn't help.

Many others walking the John Muir Way have been impressed by Bo'ness and the route through the area. The author says there "weren't any (Roman) Walls to be seen". The Antonine Wall was made of turf and has been flattened out in places. However, just a short detour from the Way at Kinneil, Bo'ness, you'll find the remains of a Roman fortlet. It's signposted off the John Muir Way, but maybe the cyclist didn't see that. Kinneil also boasts the A-listed Kinneil House, a cottage used by inventor James Watt (right beside the Way) and the ruins of a medieval church. And, yes, a Museum.

Also just off the Way, at Bridgeness, Bo'ness, is an impressive Roman Distance Slab replica. The Time Team programme called the original one of the best Roman finds in Britain. It recently featured on a Royal Mail stamp. There's also a nice conservation area town centre, with cafes and restaurants.

Bo'ness has lots to offer walkers and cyclists, even if our Museum is closed (it's actually open every day, except Tuesdays, but only in the afternoons).

Anyway, walkers and cyclists might like to download a free map showing all the things you can see in Bo'ness. Hopefully you'll find it a more inspiring. Search for "Unlock Bo'ness" on Google or "VisitFalkirk".

Re: John Muir way by bike

You are correct the weather was getting us down a bit! No offense was meant here. I think the walking route of the JMW passes more of the Roman remains than the cycle route and it is easier to miss things on a bike. Thanks for sharing the info here, I’m sure it will be very useful to people. More local advice on the JMW would be great.