My partner and I had decided that we would like to do a long distance walking holiday. The issue became where, and over how long, did we carry everything etc.........
Eventually we settled on the Speyside Way for October, and going from Buckie to Aviemore as we could get to Buckie on the Friday after she had finished work. We organised a baggage transfer company to take our bags, leaving us to walk with rucksacks with waterproofs (Scotland in October, surely they wouldn't be needed!), extra tops, food, drinks etc.

The B&B we stayed in, was right by the start of the walk, so no need to rush off in the morning having enjoyed a big breakfast.

After the ceremonial start we headed off. Unsurprisingly, most of the initial section is close to the road and some of the signposting was in need of sorting out, as it either hadn't been finished or someone enjoyed a prank Leaving Portgordon on the old railway line, and heading through the woods by the golf course brought us to Spey bay, and a coffee (and Scone) stop and the Wildlife Centre. Heading upstream you don't see much of the actual river due to all the tress, and a built up bank which I assume is to stop the Spey flooding into farmers fields. We did detour onto the Spey Viaduct for the views Before continuing onto Fochabers.

This initial section on the road was uninspiring and underwhelming. I don't mind road walking where I have to, and fortunately it was a quiet road (only 2 cars passed us) taking in the viewpoint detour to the Earth Pillars. 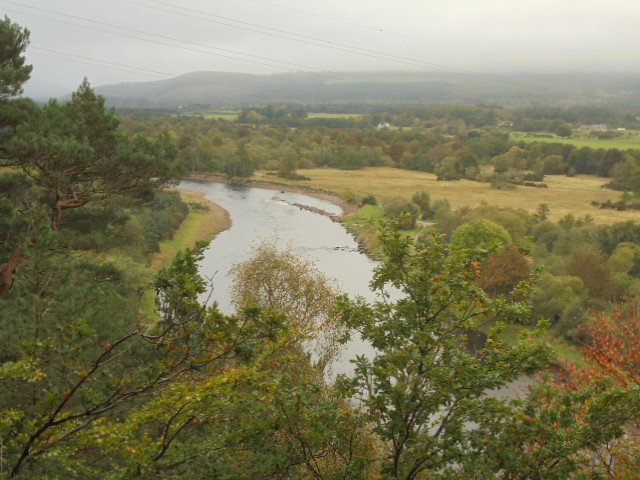 While the view onto the Spey was nice, the actual Earth Pillars are beneath you, so you can't actually see them. We finally left the road at Boat o'Brig and began heading up to the woods. There was quite a bit of gunfire coming from ahead of us, which my partner commented on, but I assured her as we were on a way marked path we would be OK (Honest guv!, What could possibly go wrong!). The route actually skirts the Speyside Full-bore gun club range (dilemma solved) and becomes initially quite boggy, but as you begin to gain height the path improves, and it began to feel like a 'proper' walk through the forest. We had read on the Walkhighlands route description at the end of stage 4 there was a picnic table - so that was planned to be our lunch stop.
Unfortunately, said picnic table wasn't there, so we decided to keep going to another picnic table mentioned on a slight detour. Literally right by the path we found a picnic bench (some detour we thought!) and stopped to eat.
Once walking again, literally within 2 minutes, we found the slight detour at the Red Sheugh burn with another picnic table!. I can only think the initial one we expected, has been moved.
The descent out of the forest was pleasant, and then you are back on a minor country road, passing Arndilly House, and continuing down into Craigellachie. While this road was also very quiet, (1 car and a procession of @12 motorbikes) it again was uninspiring to be back on a road. and continuing along past the old railway station of Aberlour and along side the river with many good views. The walk all the way to Carron was enjoyable, although with low cloud and a bit of drizzle at times. Having crossed over the river at Carron and skirted the distillery we came across workmen repairing the next section of the path. The top layer had been removed, and lots of new stones were being laid and flattened to give a new hard surface. While this will undoubtedly be an improvement once the new surface 'settles in' it was still 'raw' and not the best walking experience. The rain was now beginning to make it's presence felt, so waterproofs were donned. The planned lunch stop at the Tamdhu distillery was abandoned as it was now too wet to sit and enjoy our snacks. The old station at Tamdhu has been nicely restored, and would have made a great place to sit for a while 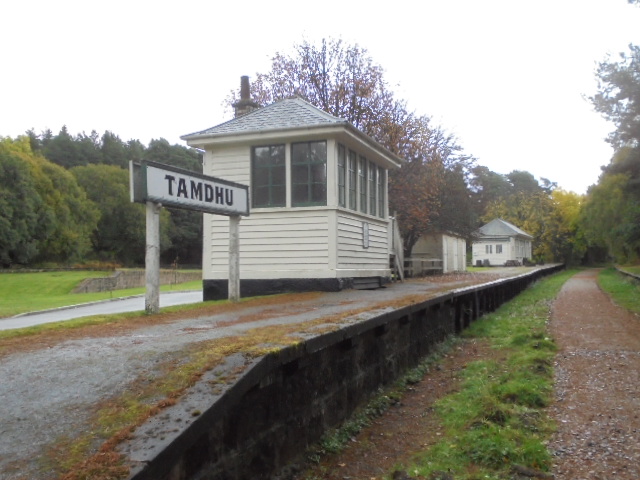 Pushing on, the views were still good, and plenty of old railway architecture still to be seen 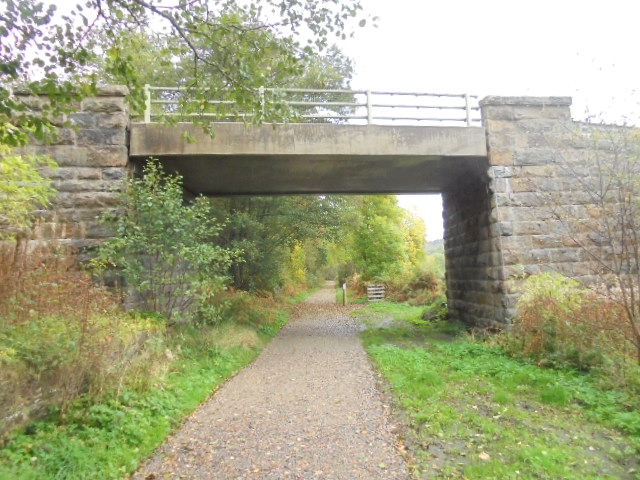 It had rained heavily the previous day, and was forecasted to do the same for the morning. However, once another fantastic breakfast was finished it had stopped raining but was very wet underfoot so no waterproofs were needed, but the gators came into their own. Back on the railway line initially, before you turn left and head up to the A95. The board walks and stepping stones were slippery underfoot, so care was taken. We passed through a couple of chain gates (not realising how much we would be cursing these things by the end of the day!), and after crossing the A95 followed the route up into the woods.
This was more like it! A decent forest track, and at the signpost you head steeply down the hill in order to cross the Burn of Ardvie. Over the new footbridge we went, and between the 2 fences but at this point the terrain in front of us didn't match the route description. The ground was sodden and heavily trampled by cattle and there is the remains of a fence on the ground to the left, so we just headed up towards the wood hoping to rejoin the 'proper' route once there.
Once back on the route, having gone through what we thought was a few chain link gates, the Woods of Knockfrink were lovely to walk through, and once out there was a good view over the valley This was the point at which the chain link gates came into their own. I doubt you could get lost on this part of the route, as you just go through chain link gate after chain link gate. While the land owners have fenced in the path, so you are 'led' in the right direction, the path often seems to be on tumbledown stone walls (so is land of no use to the farmer) and seems to have a never ending supply of the (by now hated) gates eventually bringing you to the Tom an Uird Wood.
This leads eventually back to the old railway line, having to cross the A95 again, and past the restored railway station at Cromdale. 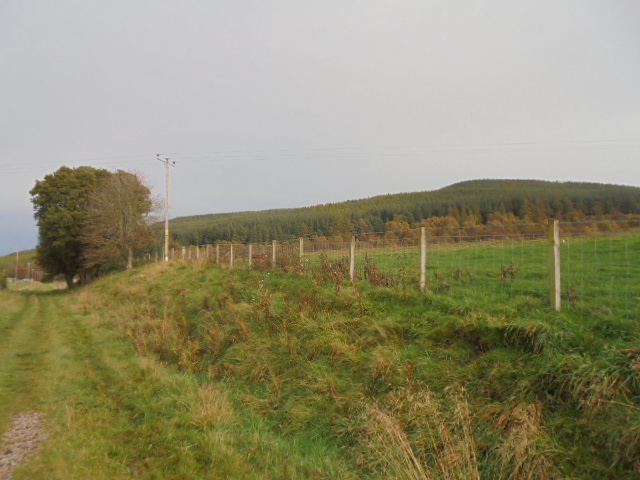 Crossing the Spey again leads you into the community Anagach Woods 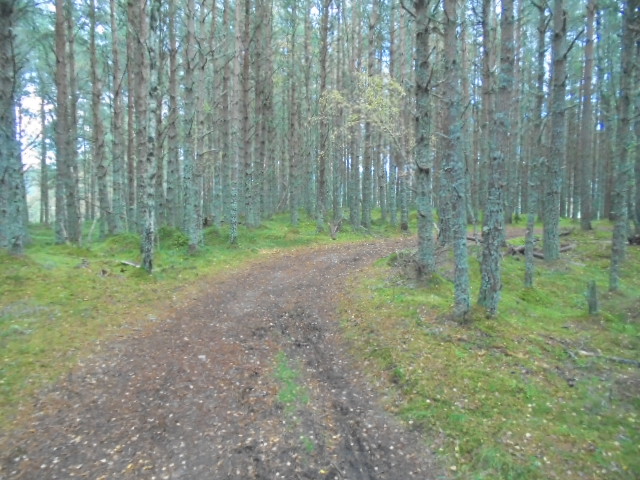 Once out of Grantown, we were back on the old railway line with good views out over the countryside 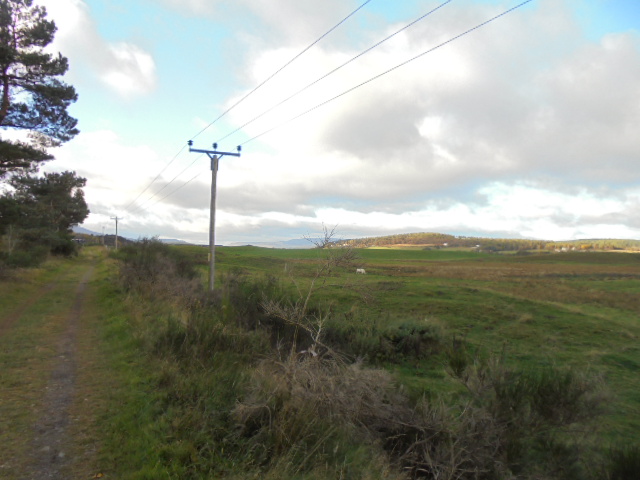 you head past an archery range (complete with warning signs) with views down over the Spey. This was a good walk to Nethy Bridge passing the remains of castle Roy 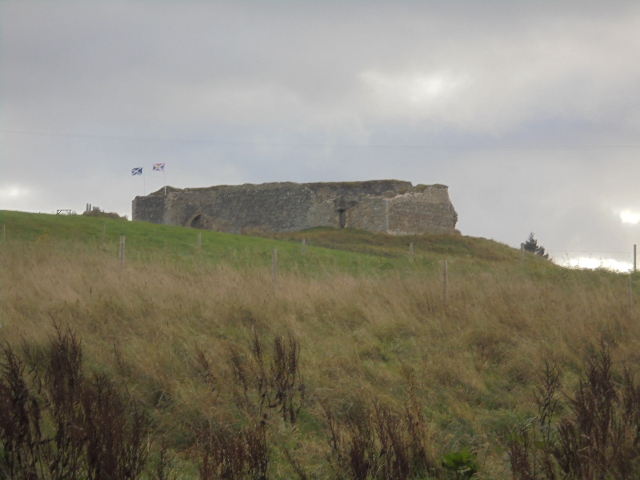 and heading into the Abernethy Forest before dropping down into Boat of Garten where lunch was had on picnic benches near the steam railway platform. The route then into Aviemore leads you through a mix of forest and open heath which gives good views as you progress The loop into, and through Aviemore, felt much longer than it actually was.
The day itself was the best walking of the 5 days, a good mix of scenery and surfaces to walk on.
While the (old?) end point in Aviemore isn't clear, we headed up to the train station, passing a Speyside Way information board, as at the train station, there is a signpost only showing the Speyside Way heading back to Grantown. All that was left to do, was go over the road a celebrate with a few pints of real ale.

Re: Speyside Way, 5 days from Buckie to Aviemore

I did this route in the opposite direction and included the route out to Tomintoul and back.