Hello. Welcome to this record of our walk of the Skye Trail, between May 14-21 2016. I wrote out this report, last day first, on the memo app of my smart phone. It seemed very important to get it down as quickly as possible. For seven days, I walked with my younger daughter who is referred to alternatly as 'The Lambs Sister'*, 'she' 'small' and sometimes 'Simone'. She was amazing, throughout, and i am sure that I owe the completion of this odysee to her. Most of the photo's are hers, and for that too, i she has my thanks. Enjoy.
*older sister is a sometime curly-haired angel referred to by us as 'agnus madre' or the lamblio.

Day 1 Rubha Hanish to Flodigarry
Weather: good, no rain.
Incidents: Although we would have liked to get down to Rubha Hanish from the first lookout, the map and instructions did not seem clear to us. So we stayed up and continued along the ridge . Frances discovers she is afraid of heights. Not sure of how or when we were supposed to cut across the field and had some issues getting back on track. Saw some disturbing lamb behaviour. (non hiking problem. Took a taxi back to Portree for food..thought it was a freebee..leave food store onfoot. Too late for bus back, try unsuccessfully to hitch hike. End up taxiing back - 60£ in added transportation)
Route/Landscape: after an early bus out from Portree, through our first view of some of Skye's beautiful landscape, we strike off. Looking down and out over the water was blood curdeling and breathtaking at the same time (see incidents). Met a nice pair of hikers also doing the trail. They had the full GPS coordinates añd maps. My little book (Skye Trail by Webster's) is looking thin. 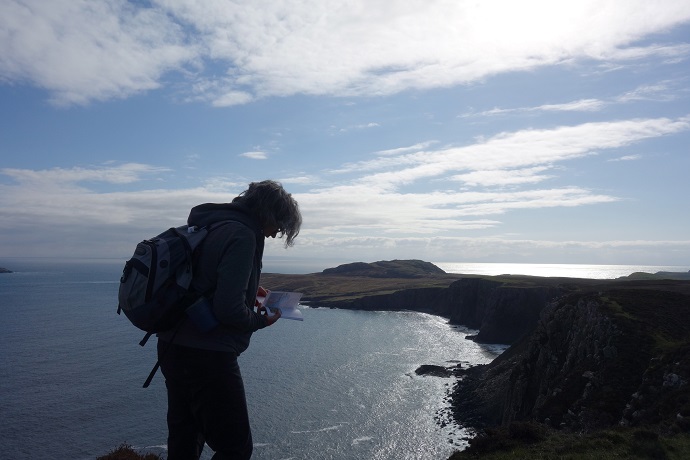 Day 2 Flodigarry to the Storr
Weather: Not raining (thank frek) not too windy (according to the experts).
Incidents: The day, towards the end, felt like one continuous incident. I will elaborate. I carry the pack of a very worn out hiker up the final ascent to Ben Eidra. 18 kg. Meet very fit group of gentlemen who question if we know what's ahead (really,quite fit...). We think we do, but it's twice as many ascents and decents than we were counting on. So eight or nine instead of four, and they were big. finally arrive at the last ridge before storr and I can't see the path down off Havergall and off Storr. Start circling storr, concerned about the time. Small is panicking, I am too, but i believe in the power of mountain rescue. we manage to contact the hostel people, knowing we are late. And finally i make Small text to say we are wandering arouñd Storr, lost. Bryan from Flodigarry Hostel manages to text us simple to follow advice "go down iñto the corrie off Storr and descend until you see a well worn path" we had already turned back around storr and were able to follow his instructions; most.beautiful.well.worn.path.EVER. When we finally are past the old man añd the needle, we mistakenly take the track through the new forestry project. When we can finally see the road...it's dark and we see a car slowly pulling away from the base. Simone illuminates her phone flashlight, waves it around and the car stops and turns around. Bless Gavin for being there. Don't know how we didn't start shrieking and crying. Gavin just chatted to us on the way back like everyone almost always gets stranded on the ridge after a daylong feat of unimaginable personal physical endurance. He too was a godsend. Once back at the hostel, Simone plopped herself on the couch and I brought her bits to eat, finding some comfort in our family roles. We went to bed and both slept badly.
Landscape/Route: there is little I can add to the already extensive descriptions of the beauty of the Trotternish ridge. It is amazing to walk up, to look at from the road and out from it's heights. The Quiraing was another revelation. Mordor, Small called it as we wound through, not yet knowing the quest that lay ahead. I should have known, given the length of the drive from one end to the next. I should have waited to find a real map on that first day and not just relied on Mr. & Mrs. Websters excellent book (Bryan, our saviour, was appalled). Day 3 The Storr to Portree
Weather: no rain! Not warm but no rain
Incidents: Late-ish start After day 2 trauma. Starting off across the moors wet and somewhat confusing. Corrected twice to strike out for ridge (back tracking once, to mount small hillock) than were clear. Small falters, understandable, and I start looking for a way out for her but when we arrive at the first scramble, it is much less daunting than it looked from far (day after trotternish..) so up we go and onwards. Coming down was unclear at the end; looked way too steep, we did a traverse to the right which was still hard but nothing like what was indicated on the map...one more tricky decent and the rest was fine.
Landscape/Route: a beautiful water ridge walk that was barely one third of the previous day. A lot of the day was coloured by day 2 trauma, but we pushed through and prevailed. I don't know if I would have done it without Smalls perseverance. We snacked at the trig point, the highest point on the walk, and I was thrilled with the view to Portree (not Staffin) We were wiped at the end but managed to keep the legs going. A frozen pizza supper from the co-op which was on our way to the hostel up from the harbour. Day 4 Portree to Sligachan
Weather: Started off no rain-gets rainy close to end of road, before path along the Slagachen inlet (bay)
Incidents: just getting down to the water at the start...quite unclear, bashed through the bushes. some issues with finding the bay-side path, but wet and some what "done" by the time we arrive. Small "not feelin'' the bunk house vibe...people are very serious (hiker climber types - with ropes...)
Landscape/Route: somewhat underwhelming. OK by the river, OK along the road some views out to...not sure what. Best part was along the bay with views across to good hills (3 'ladies bits').

Day 5 Sligachan to Elgol
Weather: Started somewhat drizzly but ended up sunny.
Incidents: Alot of path mess so hopping up añd down and over - full soaker early on in the walk. Took a path on the right instead of left right at the outset and it may have dragged us off our mark till we were on the other side of the glen and about to go up a hill when I spotted the first loch...way on the left...had to cross much bog and streams; Simone had to go barefoot to avoid getting wet over the small but deep burn. Also trouble finding the path once at the bay...had to scootch down off a little cliff after spotting a definite track.
Landscape/Route: we were walking through Glen Sligachen in between the red and black Cuillens. Imense mountain chains, craggy peaks añd summits that were not easily visible in the mist at the begining of the walk. The second half was a strange eroded pathway perched just at the edge of straight drops into the bay...scardy cat styling by Frances..saved by Small. Arrive into semi bucolic town of Elgol in time for the first bus! Amazing considering the extra 45 minutes spent to correct our path. Met two german couples, older (not older than me...), who were doing the trail in reverse. Day 6 Elgol to Torrin
Weather: started clear ended up raining.
Incidents: road closure cuz of filming. Boggy walking up through forestry añd across to second forestry. Couldn't eat cuz too wet and cold. This might be the day that Small's iPhone died, sitting in the outter pocket of her rain jacket.

lost a whole wack of pictures...
Landscape/route: started in elgol. Along very small road through rural land to coast. Along a road/ track following the coast through some soft green inhabited landscape; a whole different texture. finally out along an actual road, past Kilmarie and lovely old grave yard. Back along main road, cuttiņg up beside some forestry añd across to the other one which was VERY boggy. We got into the second forestry and Small was wet and uncomfortable...wanted to go back. We actually got to wait inside a warm car and catch a lift with a police officer because of a road closure for filming (secret volvo commercial). Good coffee, apple and fudge cake and carrot corriander soup and hot chocolate for Small and I at the marvelous Blue Shed cafe. Bus back and a power shop at the coop for dinner and lunch stuff. Met french couple who were on a five day skye trail, carrying, one day behind us. Day 7 Torrin to Broadford
Weather: a rainy patch after 1st hour than the sun won!
Incidents: one minor off course that we were aware of leaving second cleared settlement to head inland. Maybe a longer deviation walking higher than intended after we rounded the bend but there were no consequences.
Landscape: Along the road, beside the impressive Ben na Caillich, turning into rolling agricultural land than coming around to the coast. Through two cleared settlements, walking just above and below some small ridges. Moving inland through a high rolling landscape, past a quarry and than down along a former quarry rail bed almost all the way to Broadford. A dram was drunk with an espresso chaser, in honour of our feat (and feet and trotternish thighs). 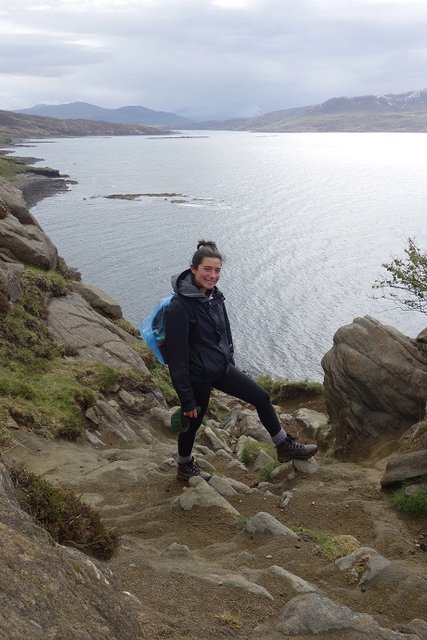 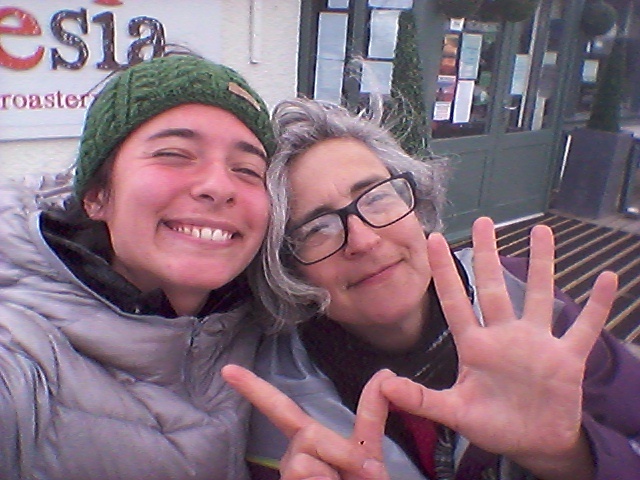