With me having had various knee injuries over the years, and running our own business which requires using a computer at least every couple of days or so, I had thought our days of doing long distance walks on holiday might be over. But the last couple of years have seen my knee improve, and we've now got a more portable mini-computer. After a week walking around the Luberon in Provence whilst using the computer in the evenings, all seemed well, so on August 10th we arrived at Les Houches - just below Chamonix in the Arve valley - to walk the Tour du Mont Blanc - a classic Alpine walk around Europe's highest mountain, passing through France, Italy and Switzerland.

The walk begins with the first climb, up to the Col de Voza. The climb heads up slopes developed for skiing, but looking at the pretty chalets and the view up the Arve is recompense for the development. 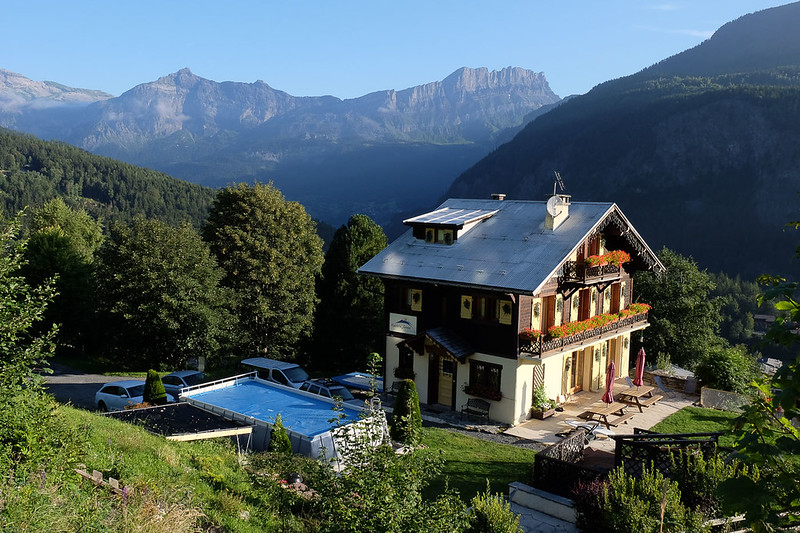 At the top the TMB crosses the Mont Blanc Tramway, and we stop at a wee building serving coffees. A very relaxed beginning. Here a choice must be made - the main TMB goes down to Bionassay for a very short and easy first stage to Les Contamines. We decide to take the more strenous Col de Tricot variant route, which runs along the side of the ridge before descending steeply to a dramatic, airy suspension over the glacial torrent issuing from the Bionassay glacier. 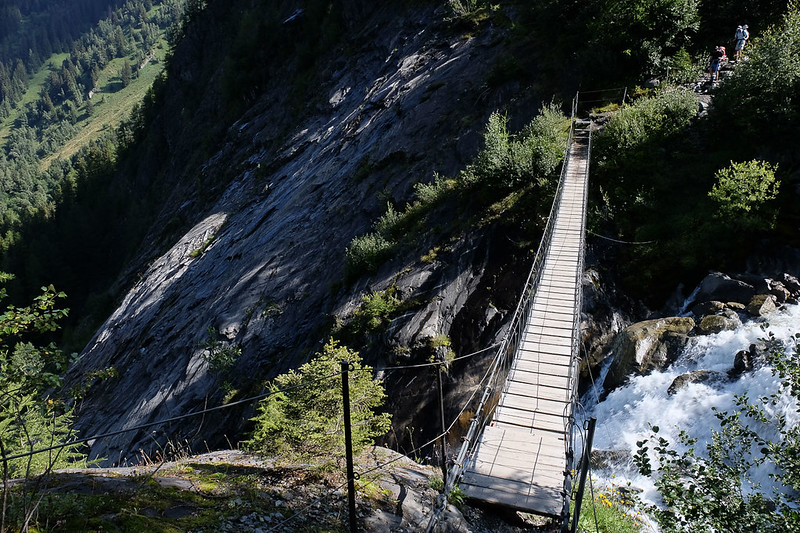 From here the variant climbs again, heading up through a landscape rich in wild flowers and with glimpses through shifting clouds of the high mountains and glaciers above, to reach the grassy Col de Tricot, where we are mugged by a tame sheep and its lamb. The route then descends relentlessly down steep zig-zags to reach the Chalets de Miage - a series of old stone buildings now housing a cafe and refuge, and today hosting crowds of people. 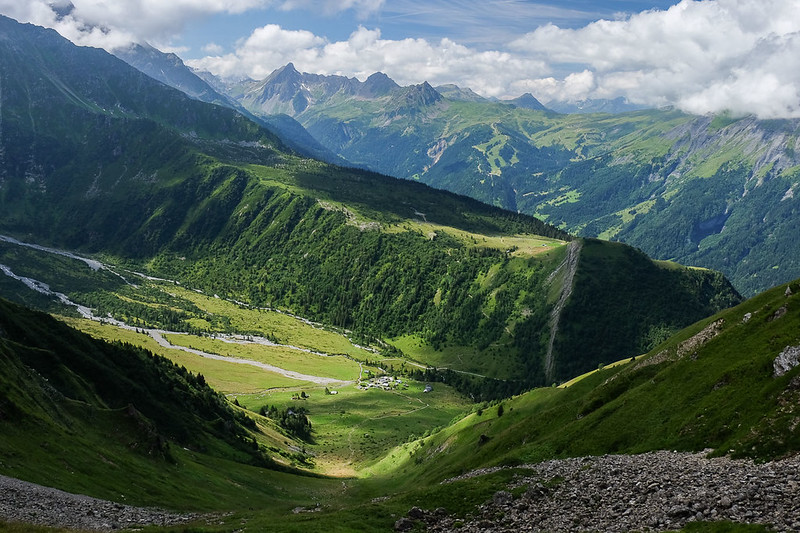 From here the route climbs again, though more briefly this time, to cross the third col of the day, on the Mont Truc ridge. Just beyond the col we stop for another coffee - it's going to become a habit - at another refuge, the Chalets du Truc. 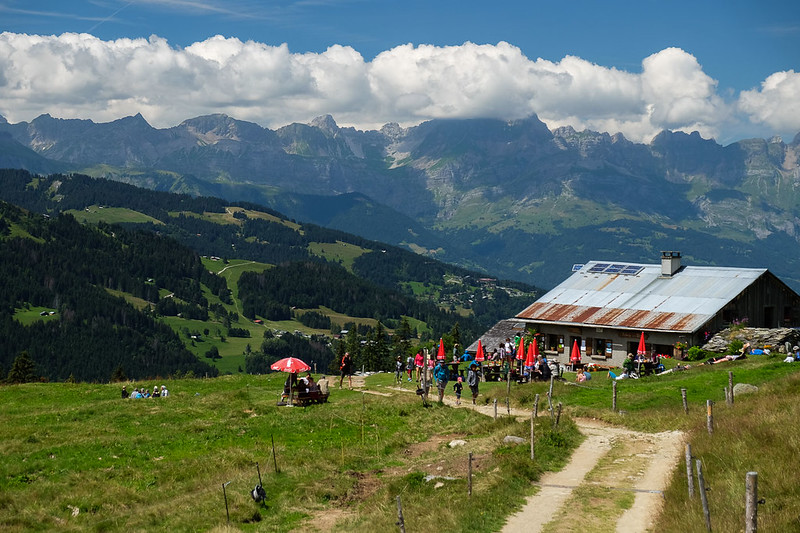 That was the last of the days 1500m of climbs, and from the Chalet the TMB descends through the woods down to the small town of Les Contamines. Here we checked into a chambre d'hote, though after a long hunt for wifi usable for work I end up sitting on the pavement outside a bakery. Les Contamines has many cheap outdoor shops (wicking tops for 5Euro anyone?), a beautiful church, and many places to eat and stay - a great end to the first stage. 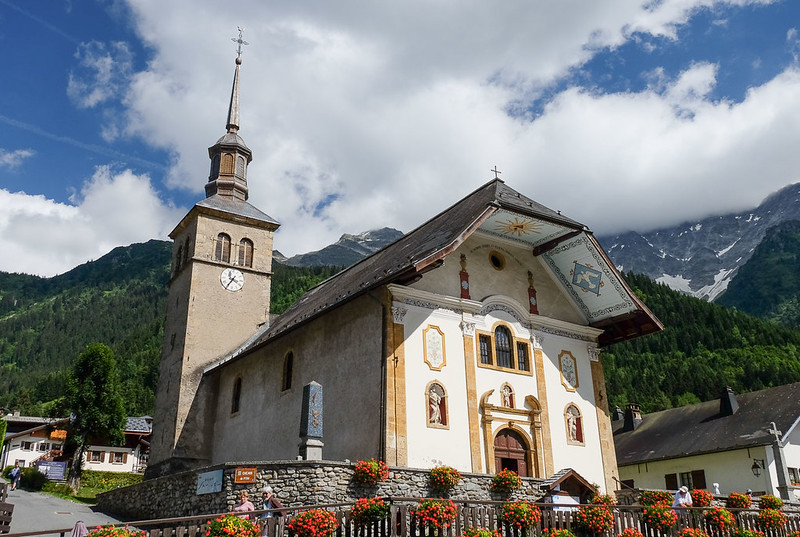 The second day starts with a walk up to the head of the valley, where there is another fine church. It then climbs steeply on what is called a Roman Road, though I think that in France the word Roman can describe many things medieval or older.

The climb leads past the Refuge Nant Borrant, and higher up in the wilder valley, the Refuge de la Balme (more coffee!). Above here the landscape becomes grander, with many wild flowers and some stunning views. 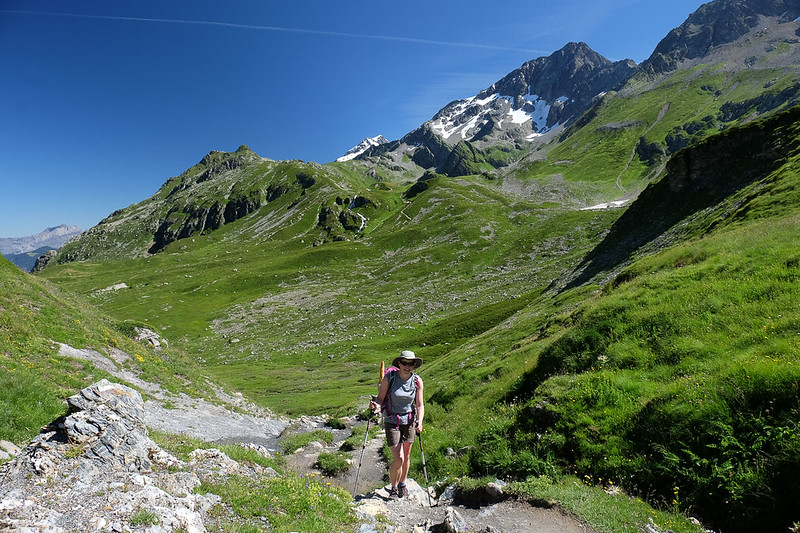 We spot a couple of marmots on the climb up to the Col du Bonhomme, the highest point so far at 2329m. 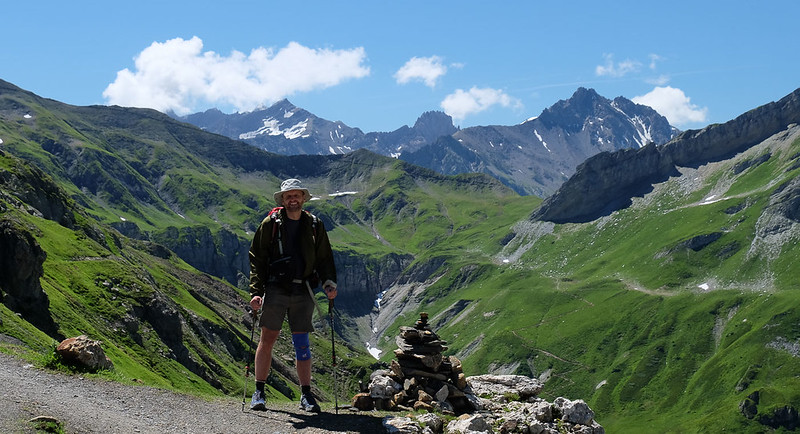 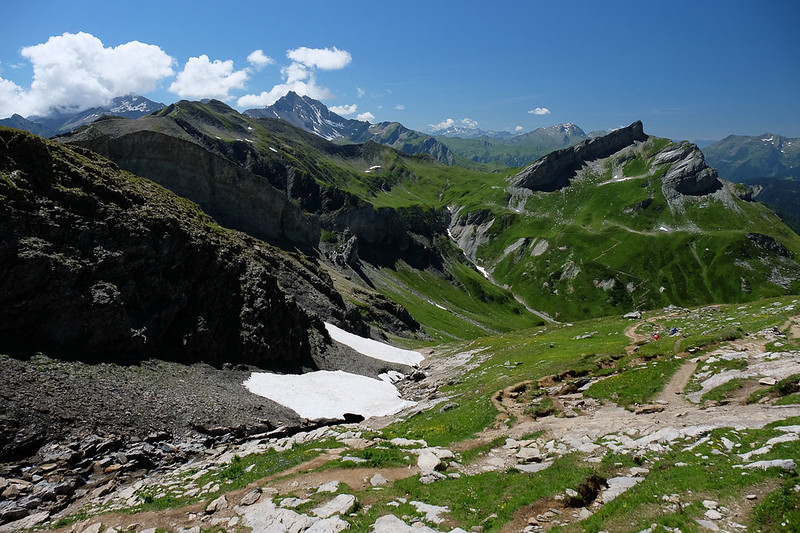 From here there is a short descent to the very large Refuge of the same name. After more cake and coffee (you spotted the trend) there is a lengthy, fairly tiring descent right down to the tiny hamlet of Les Chepieux in the Vallee des Glaciers. 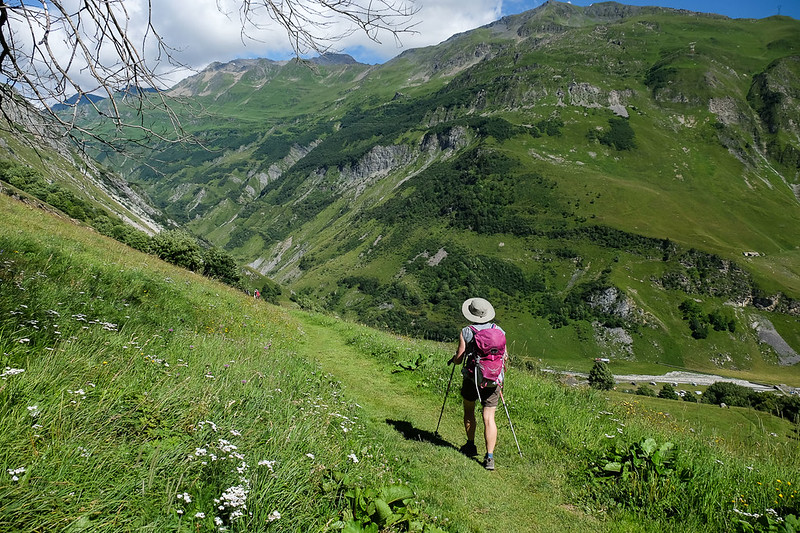 Here we are staying in another chambre d'hote - the Auberge du Soleil, which has private rooms and probably the best communal meal of the whole walk.

After two fairly long days to begin, we have a shorter day today for the crossing from France into Italy. The map and guidebook suggest the TMB heads along the road through the Vallee des Glaciers for the first part, but on the ground it has now been rerouted to follow a fine path that mostly heads up the opposite side of the river. 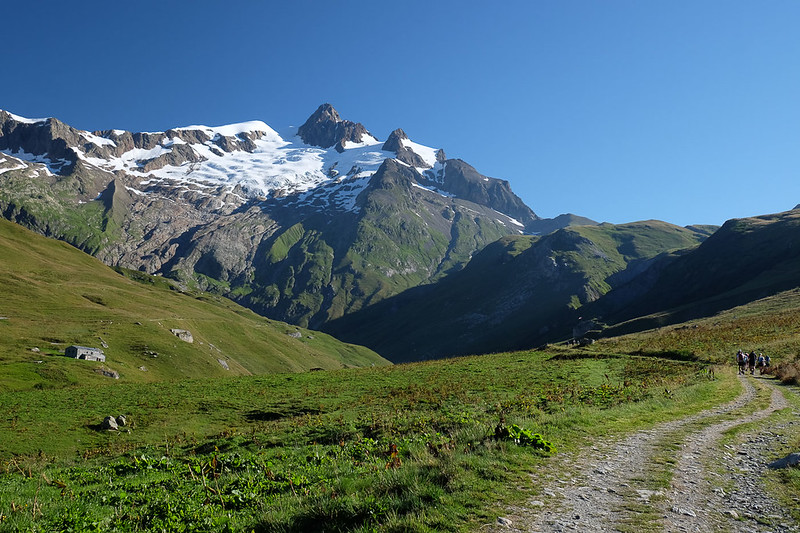 The new and old routes join for the ascent to the Col de la Seigne, the highest of the walk so far at 2516m, but the climb is extremely well-graded. 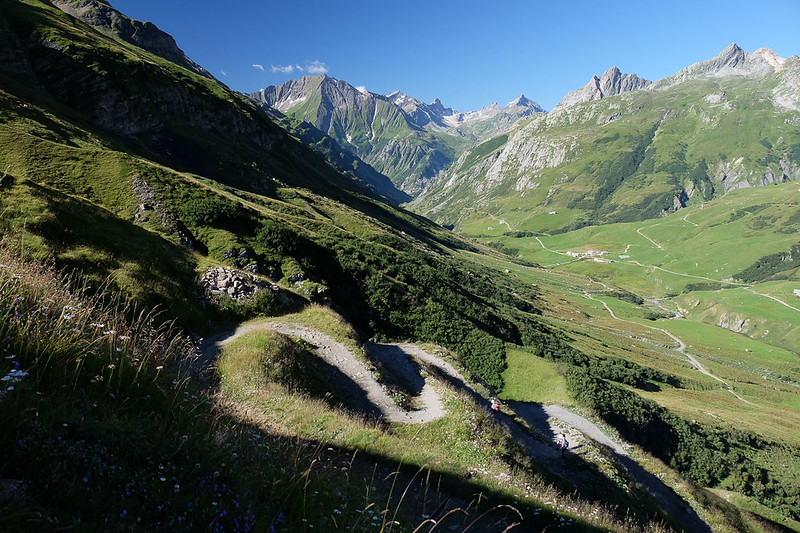 On reaching the col, the view into Italy really does take the breath away, with the whole rugged Mont Blanc range walling in the left side of the Val Veny which extends into the distance ahead, beyond some snow patches which seem set to survive the summer. 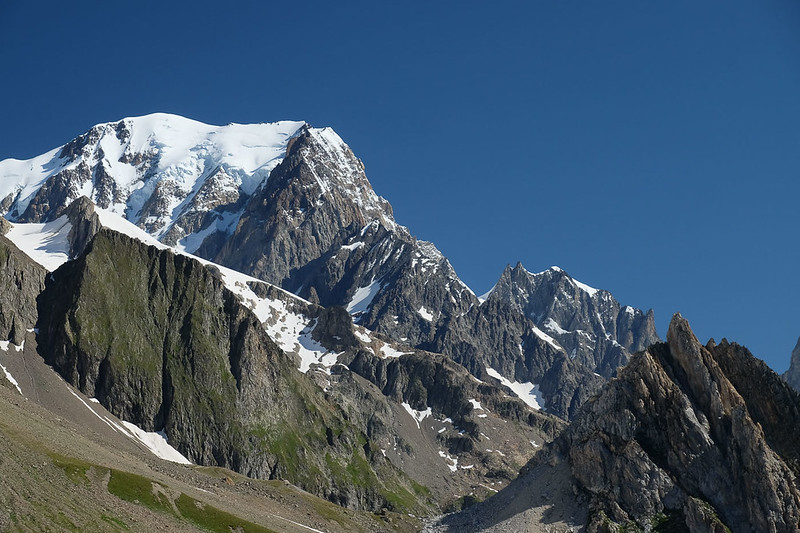 There are many more marmots to be seen on the initial descent, soon passing a building which now houses an information centre but was once a remote customs post. From here the walk continues down the upper part of Val Veny, walled in on the left side by the extremely impressive buttresses, pinnacles and glaciers of the Mont Blanc range. 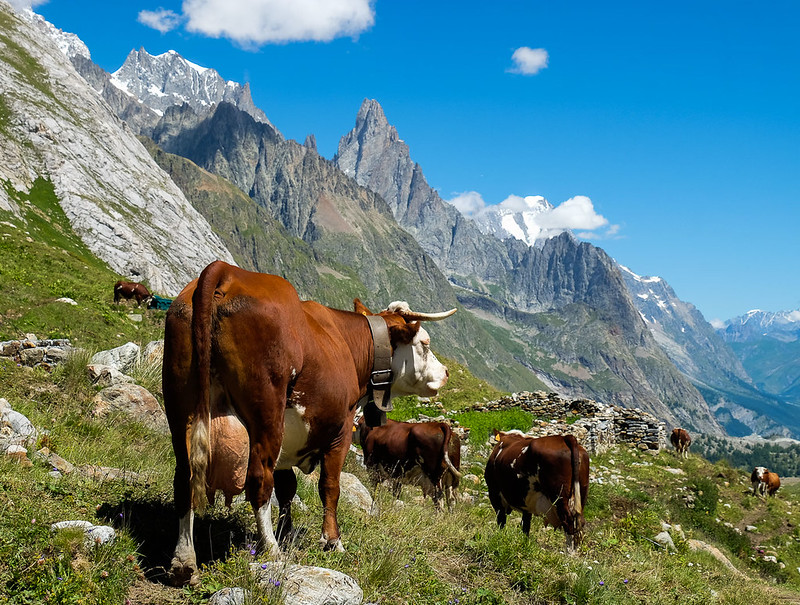 Our objective for the night is the Rifugio Elisabetta, soon seen up to the left. 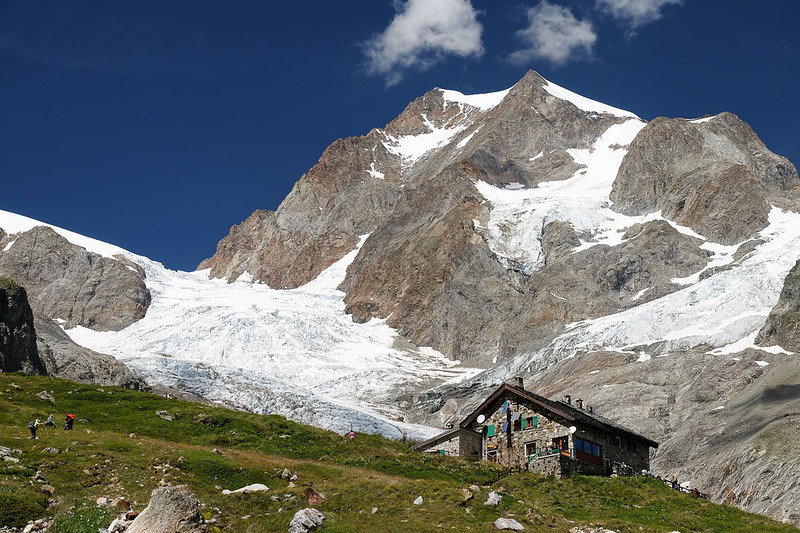 A stunning location in which to enjoy a cold beer. 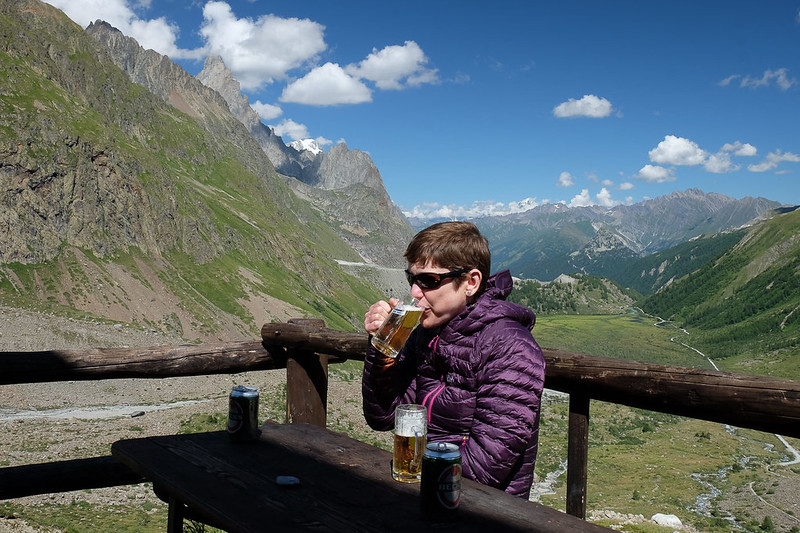 At the hut we have the luxury of a tiny room with just the two bunks. In the middle of the night, time to try out my latest gear purchase - a tiny metal device, with a ball-mount camera head, that affixes to three trekking poles to make a full size tripod. I can't get a decent view including the hut, but take some shots of the Milky Way over the mountains. 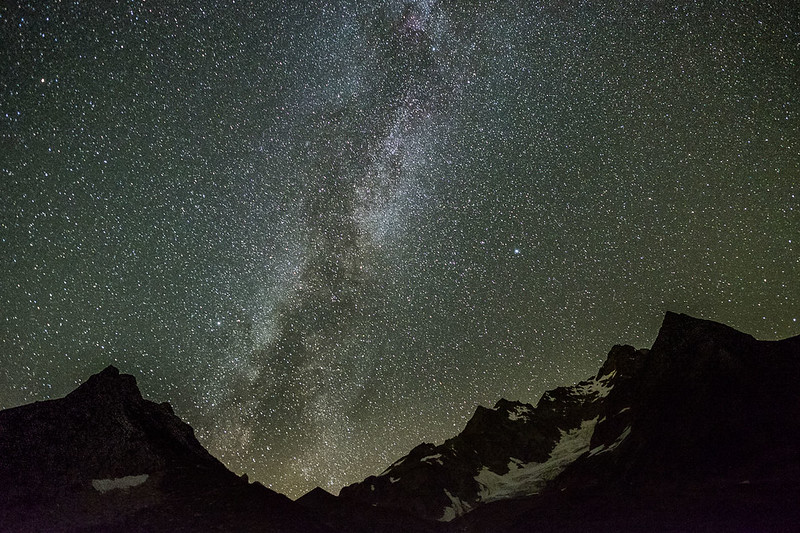 Over breakfast we enjoy a stunning sunrise looking down Val Veny - decorated by wisps of mist - to the distant Grand Combin, another giant of the Alps. 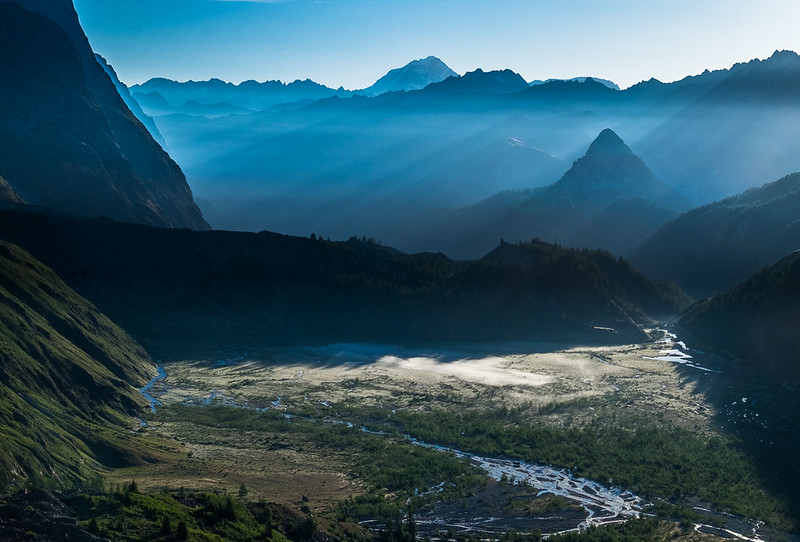 The walk initially leads down Val Veny, with the pinnacles reflected in the meandering waters of the river. 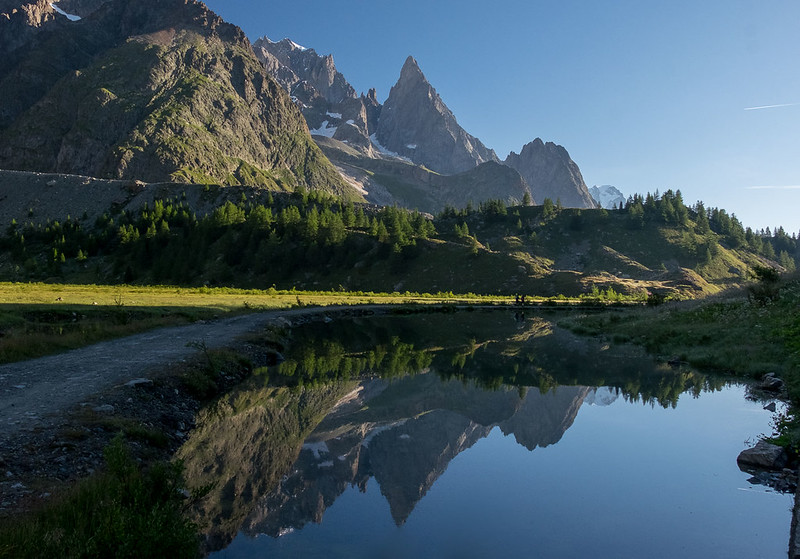 It then climbs up to reach a balcony path offering the most stunning views of the valley and across to the great peaks, from Mont Blanc right across to the Dent du Geant and the Grandes Jorasses. 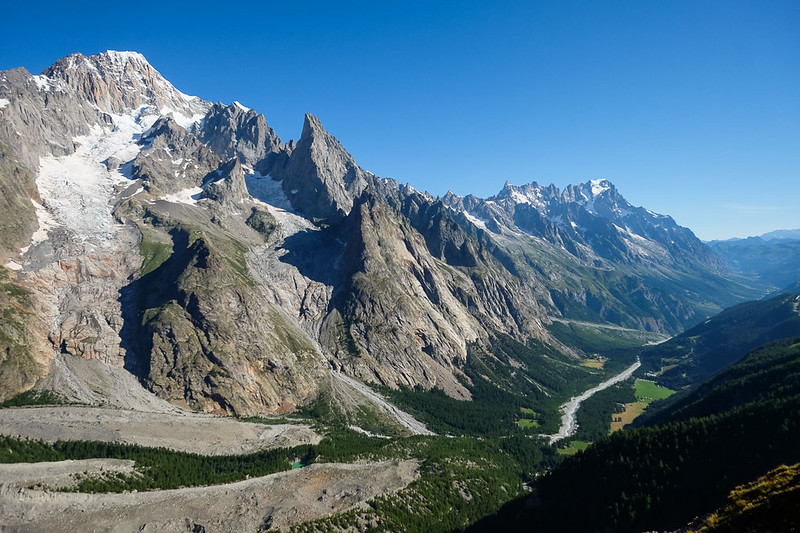 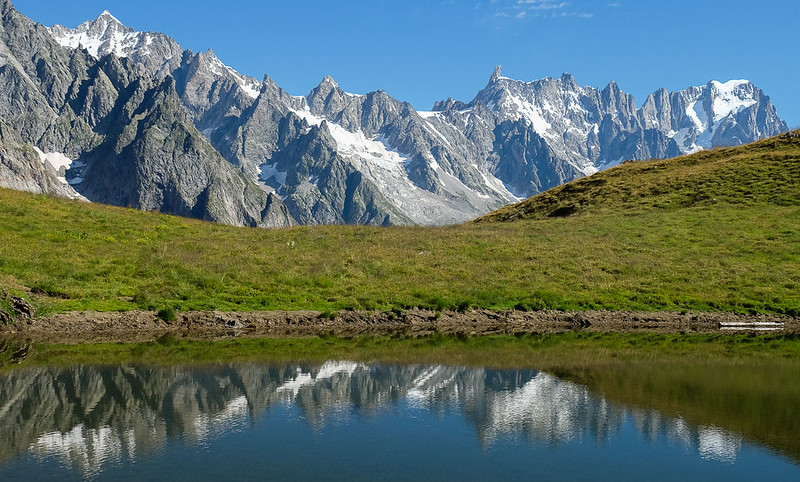 After more marmots and views then you could ever want, the superb balcony path sadly ends at the Refuge Maison Vielle, where many people are sunbathing. We descent past the top of the Courmayeur chairlift systems and a few more houses around another refuge and cafe. 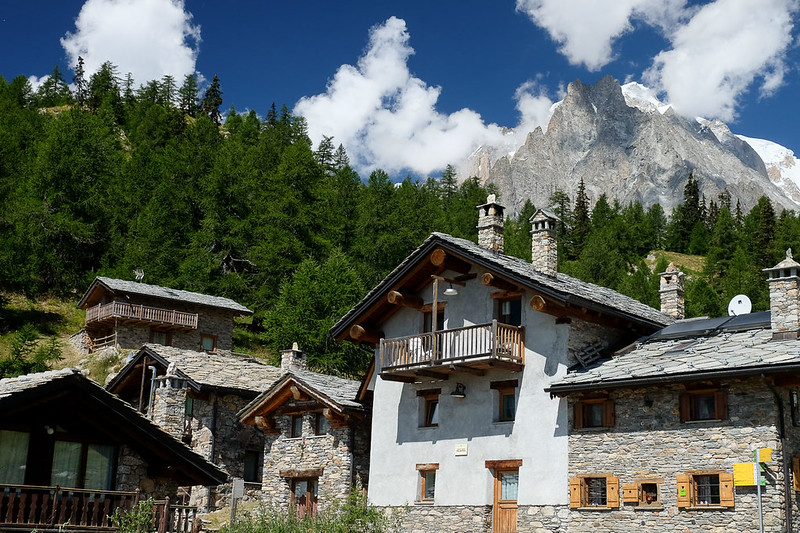 We bypass the final chairlift that some walkers are using to shortcut the route, only to find the final descent down to the valley to be really steep and dusty underfoot, frustrating in the heat when we'd thought the day was done. Eventually the path emerges at the picturesque old village of Dolonne. From here its a short walk to Courmayeur - an attractive mountain resort town and the Italian equivalent of Chamonix.

We'd planned a rest day here and spend it munching massive pizza and riding the spectacular Skyway Mont Blanc cable car up to Pointe Helbronner, where it is possible to access the glacier. 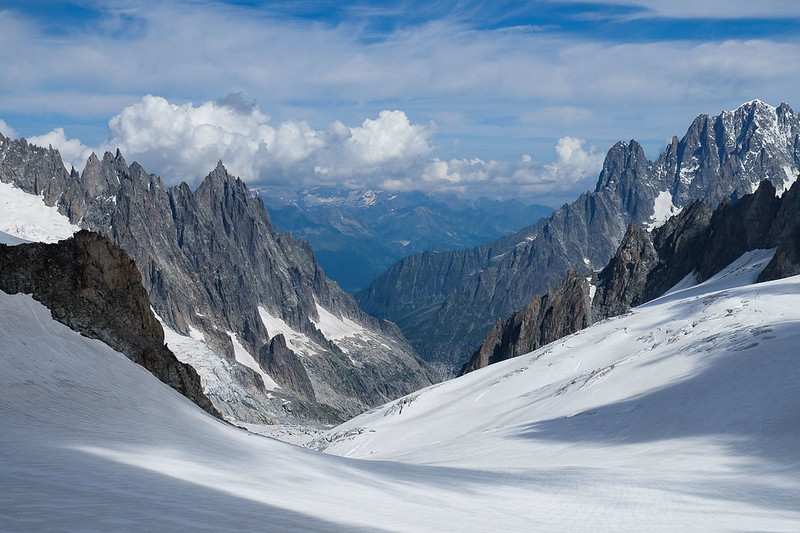 Part 2 of the Tour du Mont Blanc is here.

Great read and fabulous pictures. You were certainly blessed with the weather. My brother often goes to the Alps and as far as I can recall, I've never seen cloud-free peaks on his pics!

Some great pics there.Will read the other parts later. Will get there one day.