Or "The Heb Way" as one elderly local on South Uist pointed out to me! The journey actually started on Tuesday 22nd August with a train ride from a local station up to Edinburgh, across to Glasgow and up to Oban eventually getting there around 4pm in the afternoon. The Castlebay ferry sails at 13.30 but to get trains to connect would have meant leaving in the early hours which I didn't fancy so it was a night in Oban with a stay at the excellent YH booked. Next day Wednesday 23rd August was the sailing ( £14.30 for a foot passenger) so at 13.30hrs it was off from Oban for the near 5 hour crossing to Castlebay on Barra. I was booked into the Dunaad hostel (£20 per night) for the night so finding accommodation was not an issue. Arriving on Barra I was itching for a walk so I had a walk around onto Vatersay and took some pictures of the sunset before returning to Castlebay. On the way back over the hill to castlebay I kept an eye out for the marker post where the way leaves the road but couldn't find it so I hoped it wasn't a sign of things to come. 5 OS maps cover the Islands. I didn't buy instead relying on the OS maps in the Cicerone book. 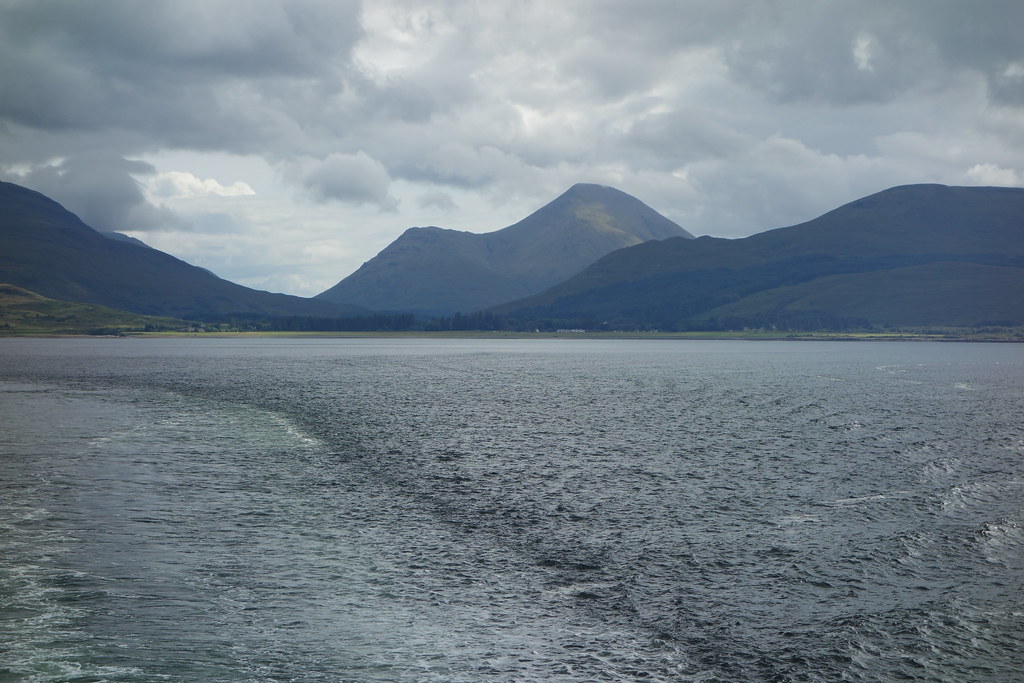 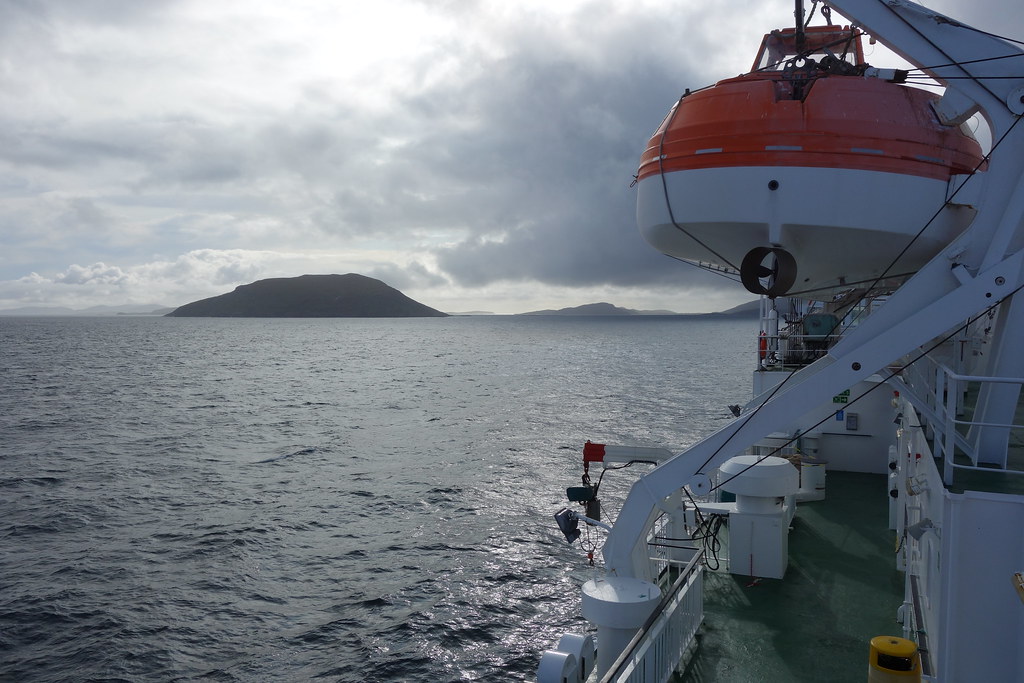 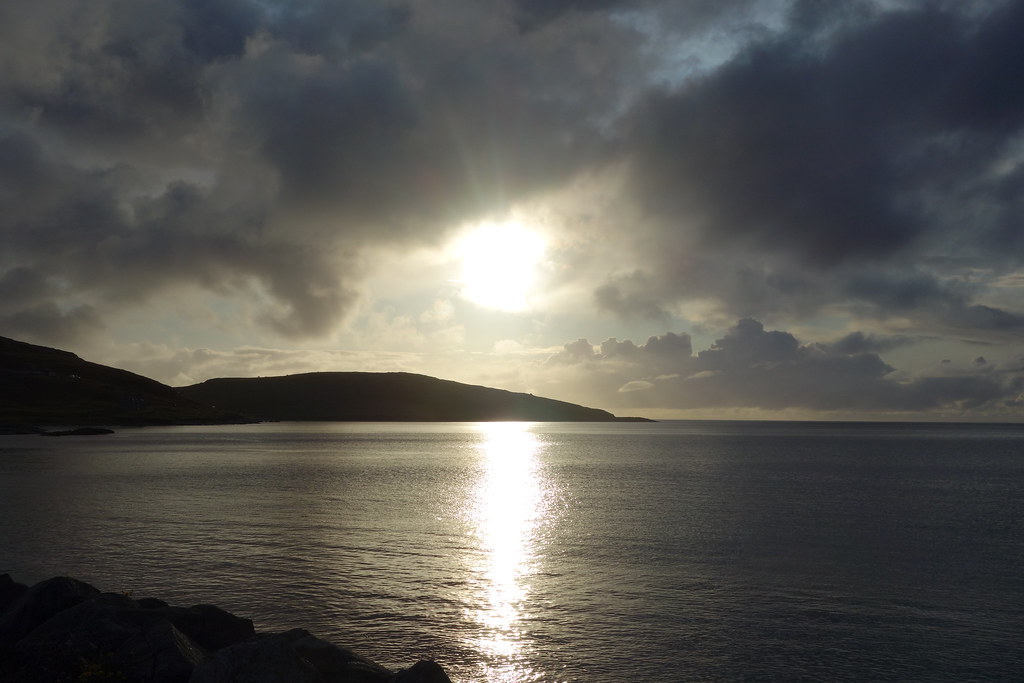 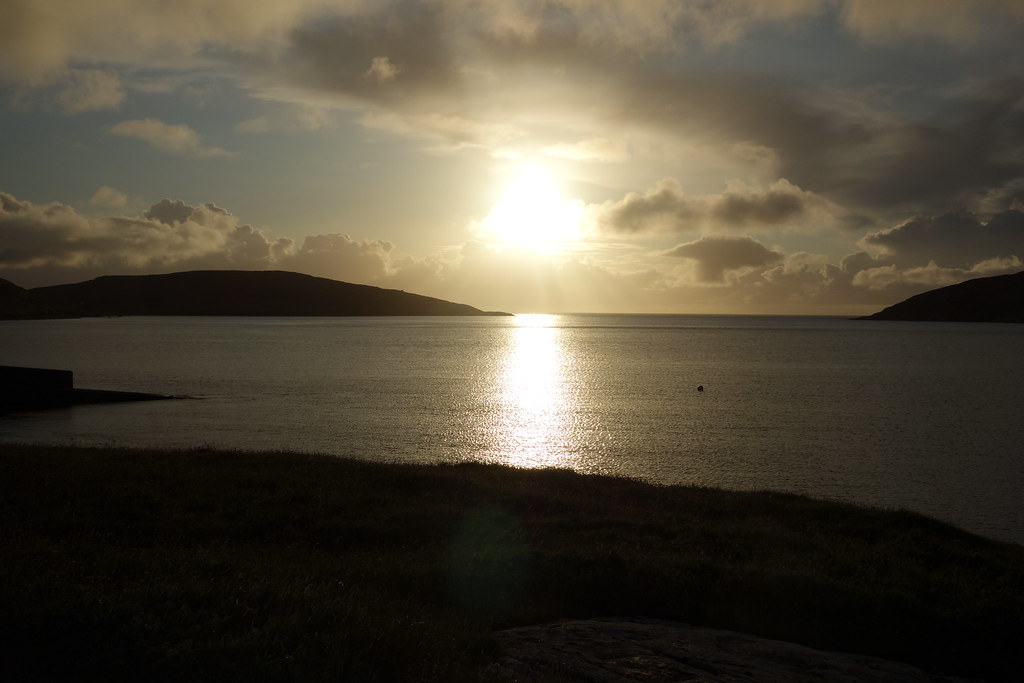 DSC01470
Thursday 24th August. Castlebay to West Kilbride campsite 18 miles.
Never having been further south than Harris on the islands I tried to calculate how much food to take and settled on 3 days. I was carrying all backpacking gear but rather wild camping I intended to use a fair selection of hostels and stock up on food when I could. Having been on Vatersay the night before I opted not to get the bus round to Vatersay and instead started from Castlebay heading up the road towards Tangasdal and then dropping down towards the dunes at Borve. Having had a wander on the beaches you then follow the tarmac road as it winds around the bay passing a good campsite just past the hotel and then after the turn off for Borve take a right turn past the old school on a rising ttrack which is eventually a 4 x 4 gravel track until you come to a metal gate. It was here I saw the first sign. I was beginning to wonder if there were any. After going through the gate the gravel track goes to a single track and climbs up onto the moor. A lot of work has been here on a pathway. Unfortunately the weather has thought otherwise and a whole section of perhaps 20 feet across has been washed away in a mud landslide. Getting across is difficult as the mud is soft and shin deep. From there signposts guide you to the col where you follow the posts over a trackless moor down to the track around Loch an duin and around the waterworks. From there again it is a matter of following guide posts over the moor until you drop down to the road and turn right and walk to the ferry terminal building at Ardmhor. There is a decent waiting room there with water and toilets which people have used overnight. From there I got the 15.45 ferry ( £2.95) to Eriskay. The weather had turned foul and intended to look for Accomodation. Off the ferry the path goes over the beach and then turns into the village which has a general store. I didn't fancy the look of the accommodation so kept walking and started across the 1 1/2 mile causeway across to South Uist. Incredibly at the start of the causeway I was in foul weather but by the end, no more than 1/2 hr I was in brilliant sunshine. From there it was a matter of following the road up to west Kilbride campsite ( £8 to camp). The campsite has excellent facilities and a café which closes at 5pm. 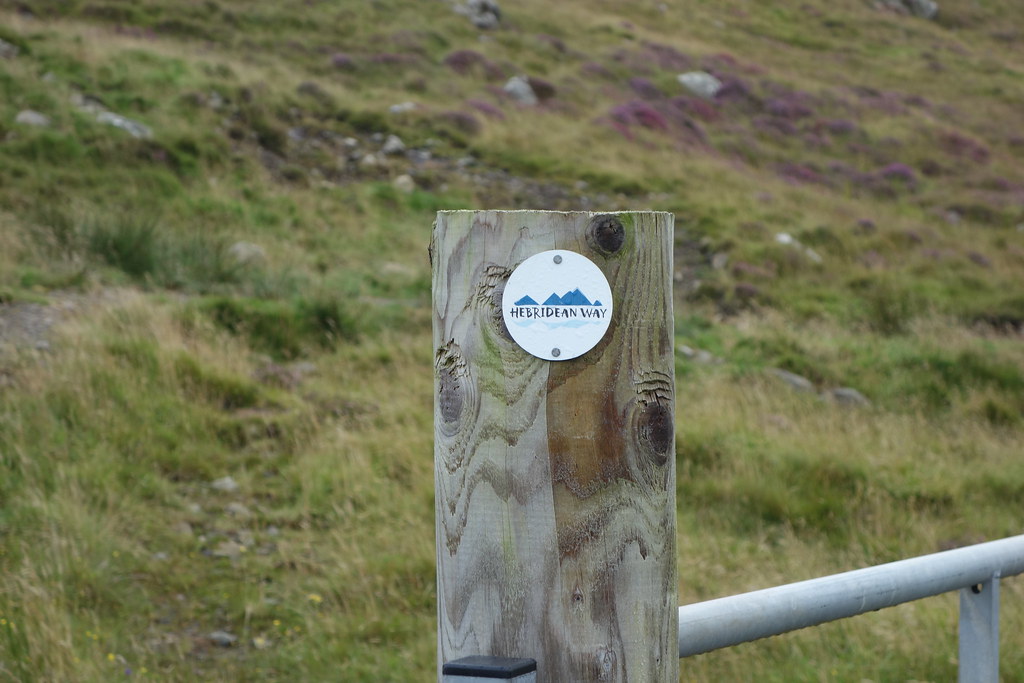 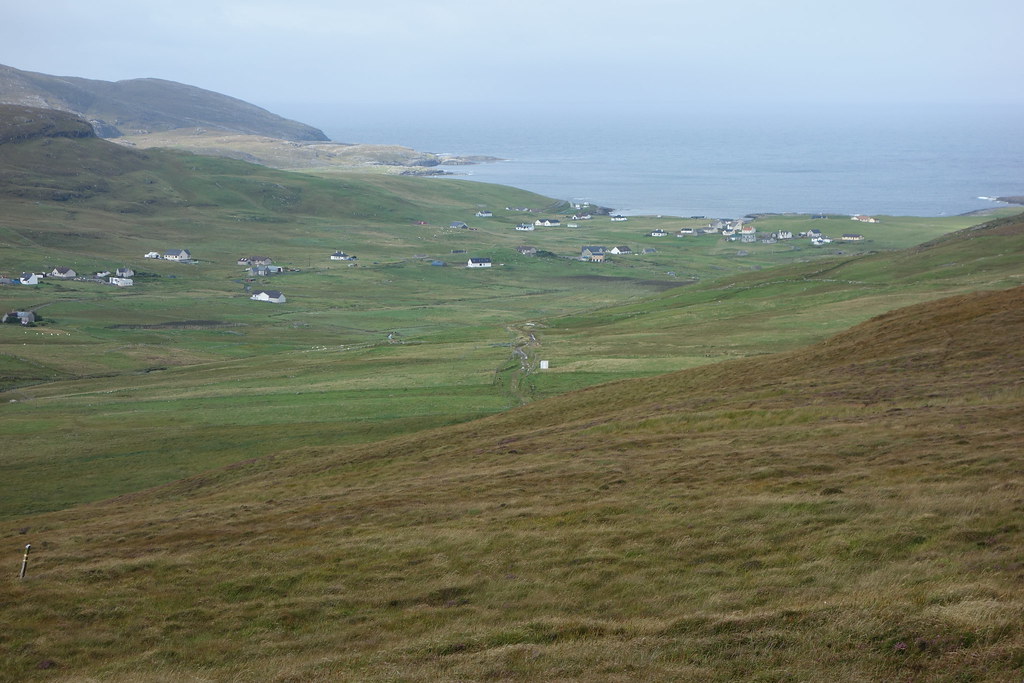 DSC01477
Mudslide on the path over from Borve 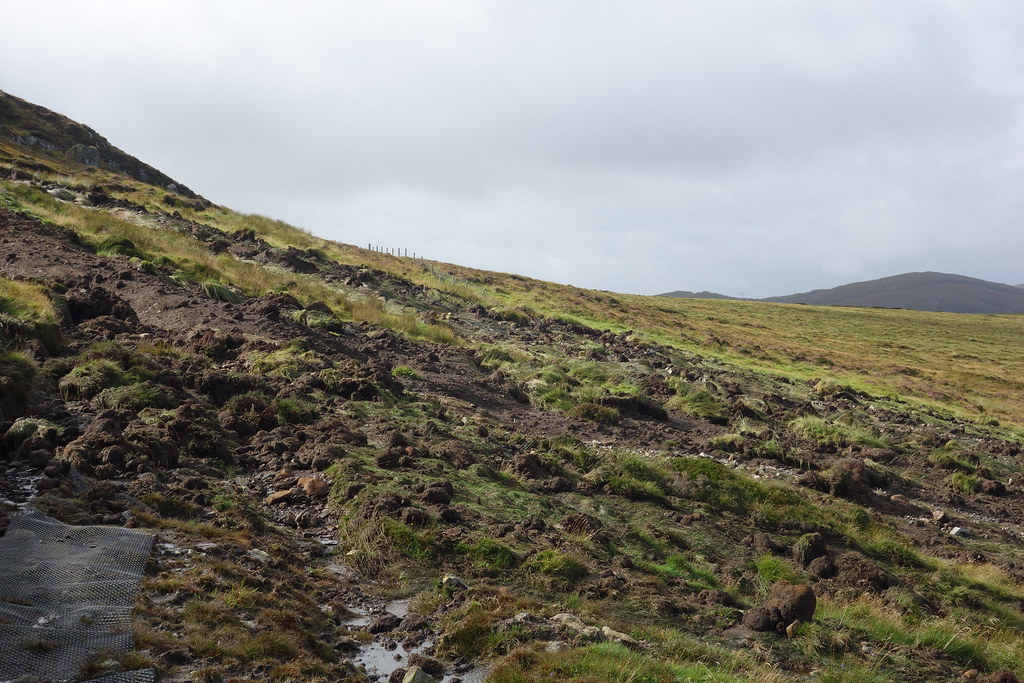 DSC01479
Looking over the sound of Barra 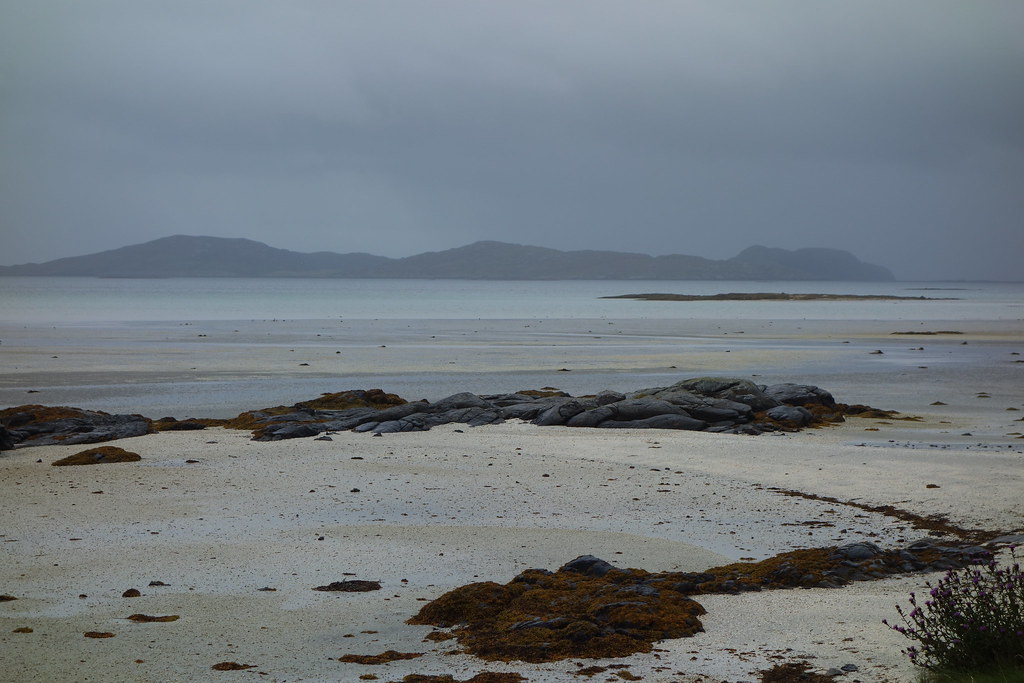 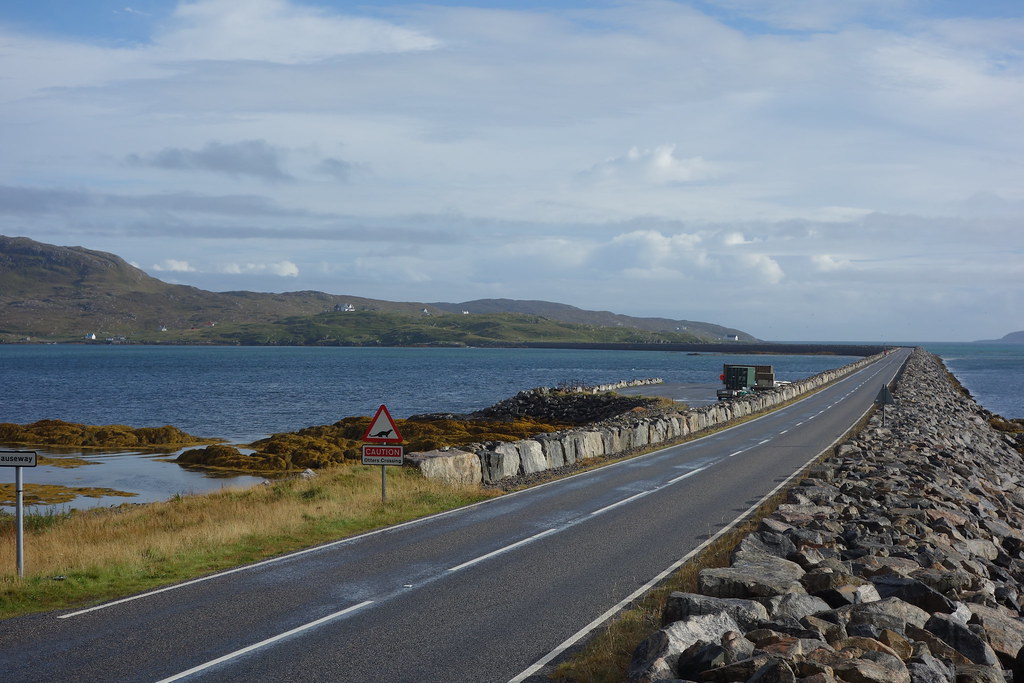 A decent morning and I was off around 8.30am. The tarmac road is followed for about 2 miles until you come to the road down to the Pollachar inn and before that there is a sign for "The Machair Way" which you follow for the next 23km. The path is virtually level for the whole way and is easy walking. Navigation is easy and it a case of following the farm tracks and posts. The sea is always on your left and the sound of waves and birds constant. The track at one stage goes to the left of the golf course and rather than walk along the beach for the entire length I opted to walk the edge of the fairways which did not seem to bother the golfers. Eventually I did walk a section of beach before re-joining the track past the golf course. Along the track from Kildonan a farmer helpfully pointed out to me a stop tap in his field of fresh water. The path continues on good tracks up towards Howmore. One point of annoyance was a barbed wire fence which across the path nr Loch A Mhiol which I had to climb over. After that I opted to use the road up to Howmore getting there around 4pm. The hostel at Howmore (£15 a night) is superb. The buildings are old stone and thatched roof and are managed by the Gatliff trust. One building houses the sleeping area and the other a cooking and sitting area. the facilities are superb and I intend to return here. 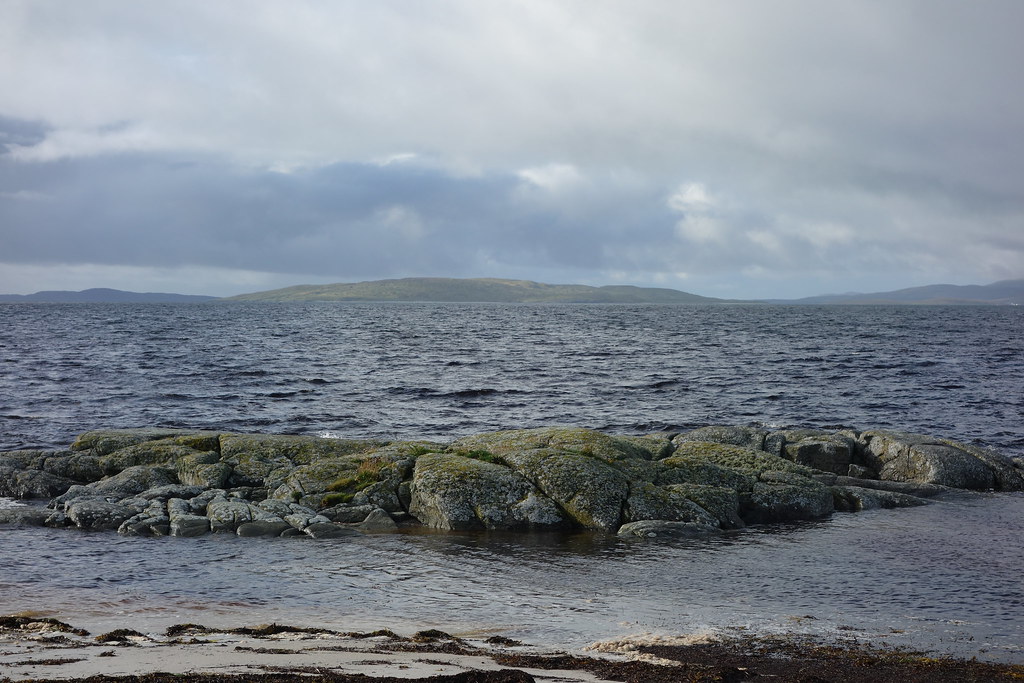 DSC01494
Looking back towards Barra on The Machair Way from Pollochar 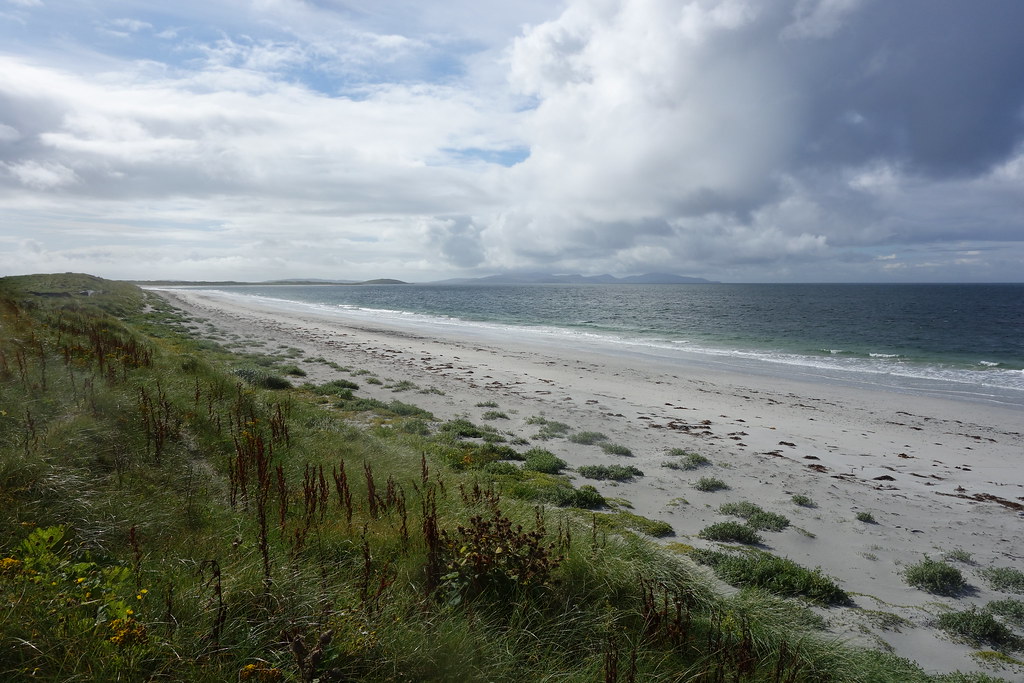 DSC01502
Beach on the approach to Howmore 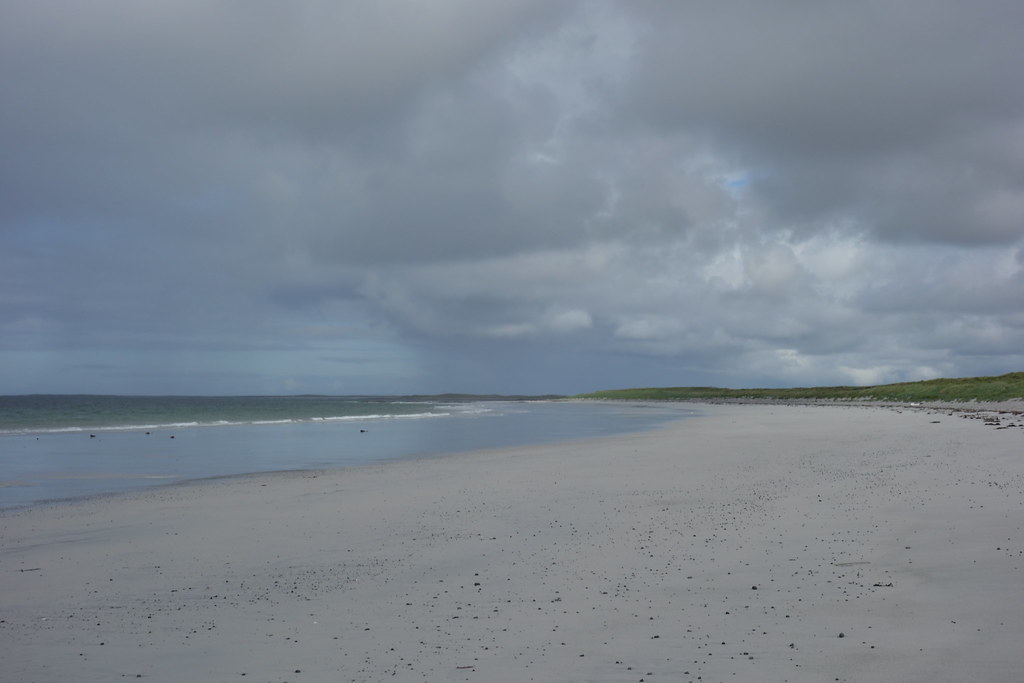 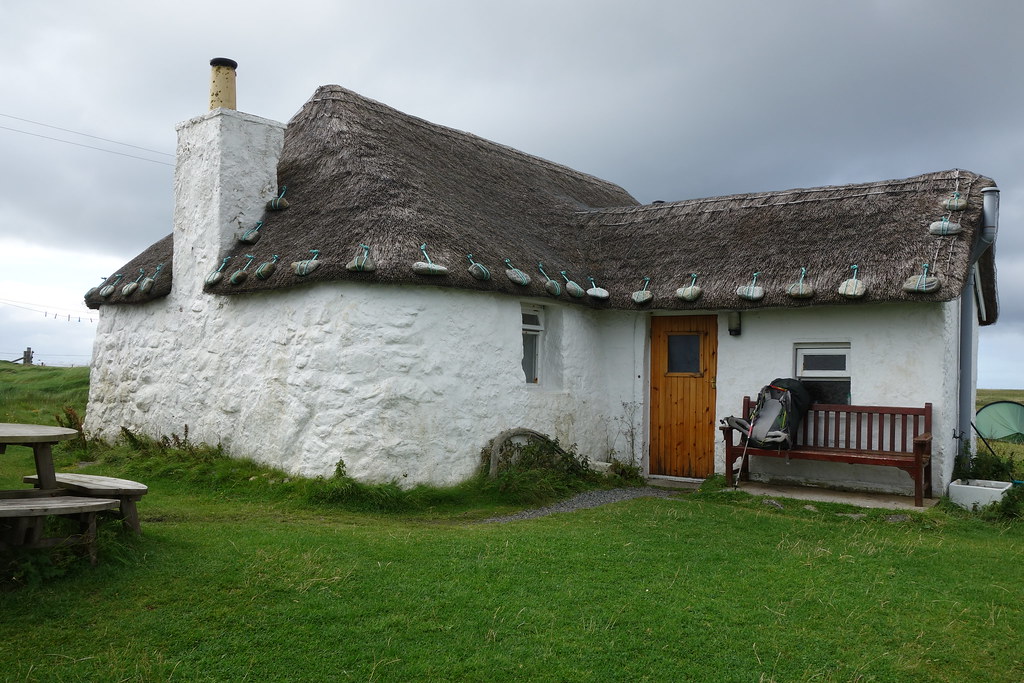 DSC01511
Saturday 26Th August. Howmore to Nunton 21 miles.
A midgy morning, very still and muggy. The track initially cuts back to the coast and heads up to Drimsdale house. I miscalculated here and didn't take the right turn and ended up walking up to Stilligarry. Realising my error I checked the map and saw a path from there to re join the Way.I attempted to walk across the moor from there to re-join the way but after 1/2 mile of bog gave up and re joined the main road and walked up to the path leading to the statue, pausing briefly for photos due to the midges. From there I dropped down and took a gravel path across the moors leading to a small footbridge at Bagh Nam Fiadh. From there, there is a raised section of turf which I mistook for the path but which lead to a large boggy area with no path. I backtracked but could see no other path or markers so took a bearing for the bridge at Ath Cumhang which worked and after that I was on good gravel tracks to the turbines and down to nr Lochcarnan where a road is followed to Ardmore ( store) and over the causeway to Benbecula. Over the causeway is another store and from there I dropped down to the beach and walked the sand to nr Nunton and then followed the road up the Hostel. The hostel ( £25 with breakfast) is superb, very well appointed. I walked into Balivanich that night for a few beers, unfortunately the only restaurant was closed for a private do so it was a pack of sandwiches' from the store and the purchase of more rations
Looking inland from Nr Stilligarry 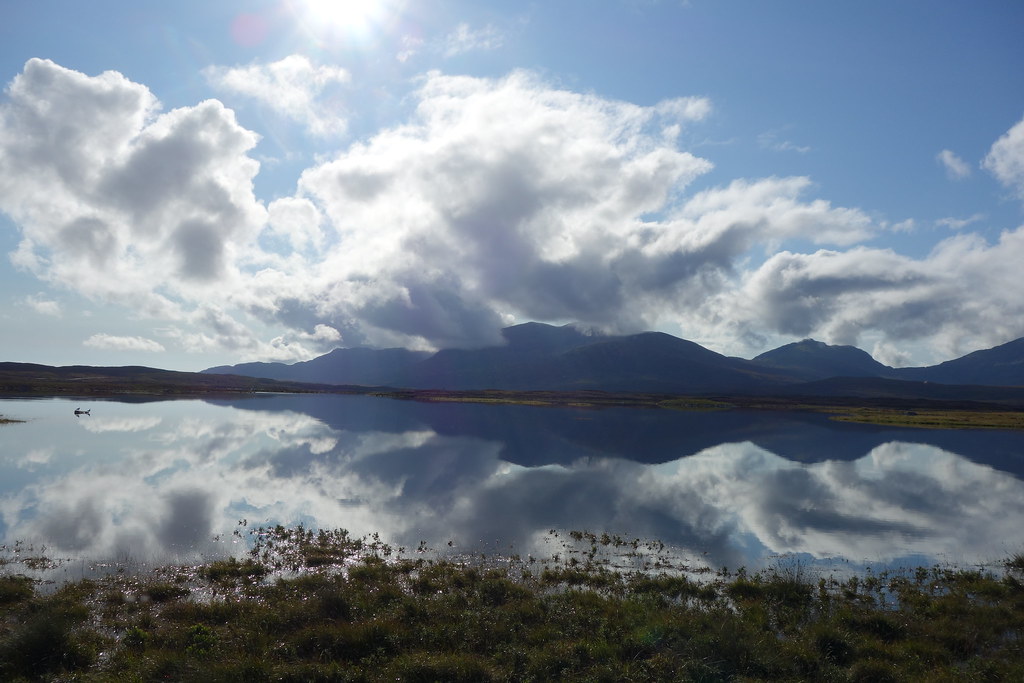 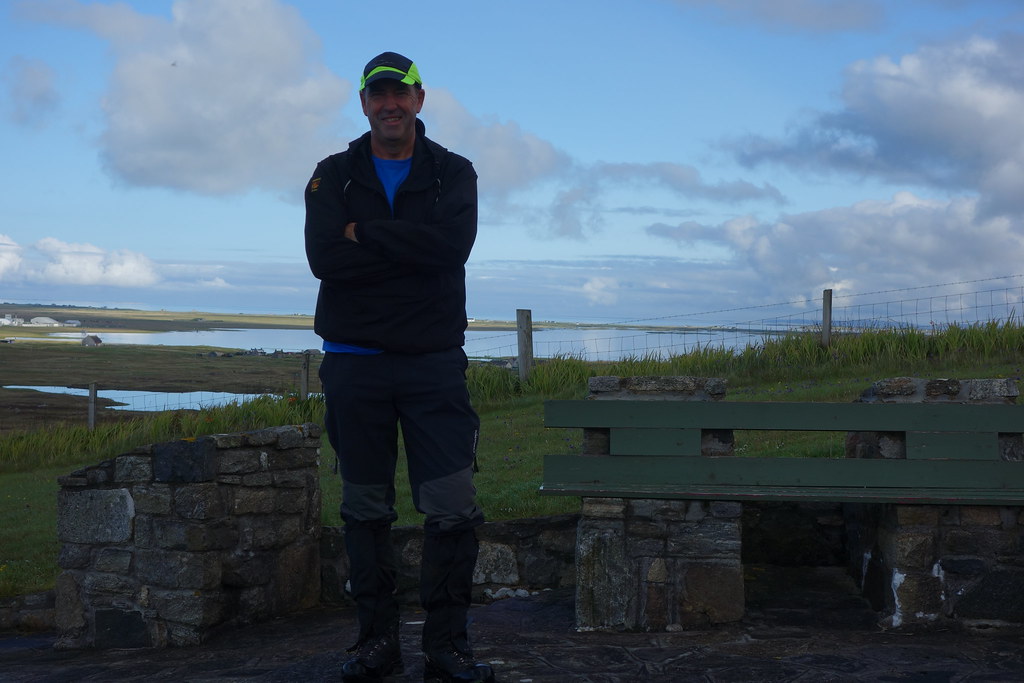 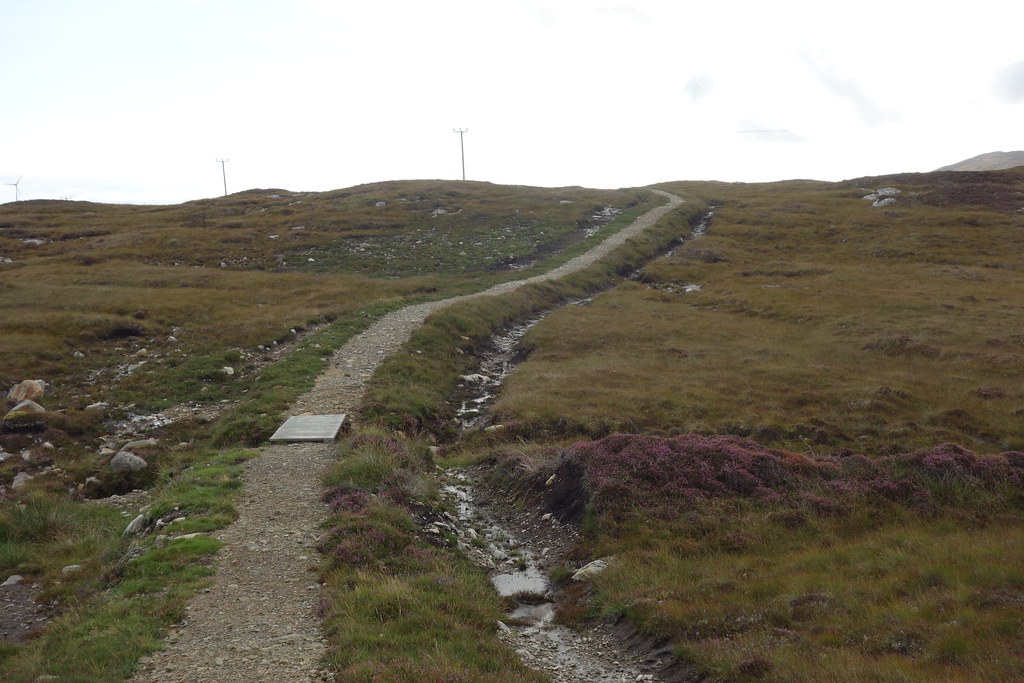 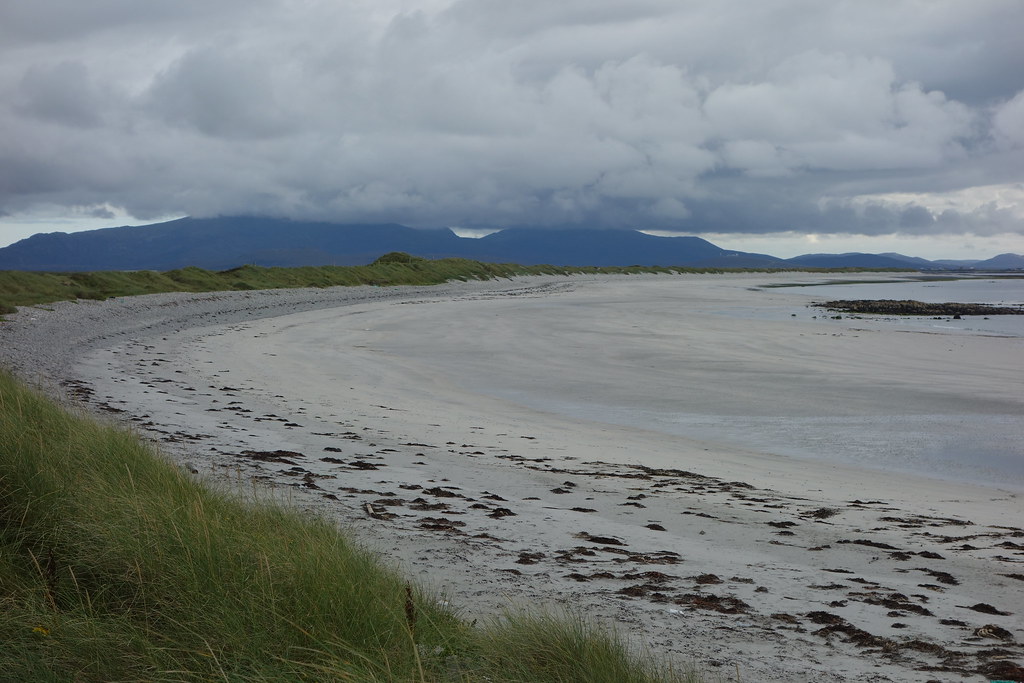 DSC01529
Sunday 27Th August. Nunton to Lochmaddy 22 miles.
The day began wet and windy and didn't change all day. First start was a 4km level tarmac road out of Nunton east. This takes you a gravel track and then you begin the ascent of the 124m hill of Ruabhal which is the high point of the area and gives you a vantage point of the day ahead. The cicerone book states that you follow the marker posts down the gentle ridge north. The ridge itself is easy as is the direction but the marker posts are absent. After a lifetime in the Scottish hills I'm used to making my own path but when the book states there are posts you tend to look for them. Not finding any posts or trace of a path I headed between the lochs to Caolas Fhlodaigh where the book directs you to a thatched cottage but instead the actual path swings to the west from a standing stone. I ended up climbing over another barbed wire fence due to this.. You then turn left and join the main road and then unfortunately walk the tarmac road for the next 7.5km over Grimsay and onto North Uist. Care is required as much of the road is single track with not much pathway. There is a new section of pathway, which is signposted, which takes you off the road about 1/2 mile past the turn off to Cnoc Cuidhein and leads you through a section of woodland and onto open fell and then onto a raised section of turf. I had to check my bearings here as the new section seemed to disorientate me, strangely this happened to other walkers I later met. From there you follow turf sections and gravel paths before you drop down to Loch an lasgaich. At this stage the mist was down low and I didn't get the feeling I was at sea level as I followed the path around the loch up to a hotel, where even though I was desperate for a coffee I didn't go in as it was 3pm and there was a distance to go. You climb through the woodland on good paths and then drop down onto the road where it is 5 hard miles to Lochmaddy. With the mist down and raining it wasn't enjoyable. There are sections of the old road to walk but it is still a hard surface. I had studied the Cicerone book beforehand and it made mention of a hostel in Lochmaddy. There is NO hostel in Lochmaddy and I spent an hour looking for it. It not being a camping night I opted for the hotel. That night I met a couple of other walkers, one of whom had taken 3 weeks to reach this point and another who had started after me and had done 30 mile days to get here. On the plus side there is a village store in Lochmaddy 8am to 5pm.
Views from the top of Ruabhal. 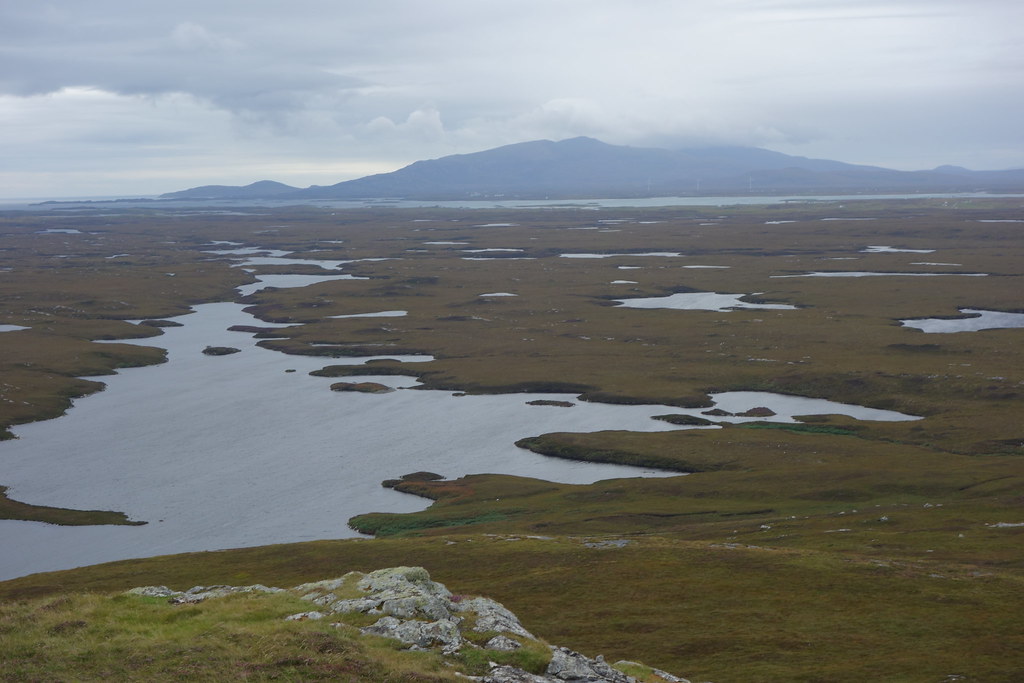 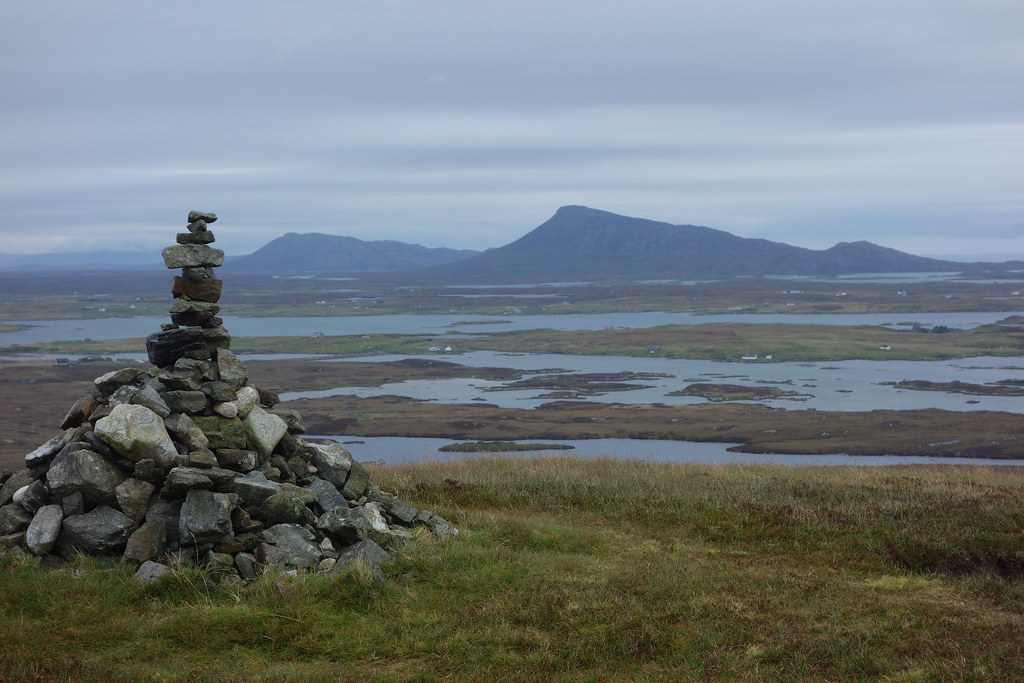 Hello,
Would it be possible to include a map of this route and maybe some words as to where each of the images were taken?

Walkhighlands haven't caught with this route etc. no information around the site unless I have missed it.

Hi done the first one. The map includes the ferry crossing from Barra to Eriskay.

Well done. I think the guide was written before the route was created so there may be some variations.