our_route.gpx Open full screen  NB: Walkhighlands is not responsible for the accuracy of gpx files in users posts
Monday 28Th August. Lochmaddy to Leverburgh. 11 miles.
Feeling very tired from yesterdays efforts with about 14 of the 22 miles being on tarmac I decided to change my plan. Todays initial plan had been to walk to Leverburgh, ferry and then walk onto Horgabost. Made the decision early on to have a later start and to walk 10 miles to the ferry and then stay overnight in the Hostel in Leverburgh. the first stretch out of Lochmaddy is road for 3km where you can leave the road for a section around Blathaisbhal. However on approaching the path I was forewarned by a local that extensive work was taking place, that no diversion was in place and that the road was better. getting to the path section I could see that Scottish water had the whole section fenced off and were blasting rock, so the road it was until just after Aileodair which is 5km in. That led to a quiet road section for another 1km then it was off across the boggy moor following the posts and wooden bridges until you come to a larger bridge. From there a path goes up the hill to the col between Beinn Mor and Beinn Breac and then follows a ruined old wall down to the road and it is then a case of following the road over the causeway to the shelter for the ferry to Leverburgh (£3.45) . There is a good café with a shop attached about 1/2 mile from the terminal. I caught the 4pm ferry over to Leverburgh and stayed overnight in the hostel (£25).There is a restaurant with bar attached on the ferry landing. I had a few beers that night with Mike who I had met the night before in Lochmaddy who was also doing the way albeit quicker than me. 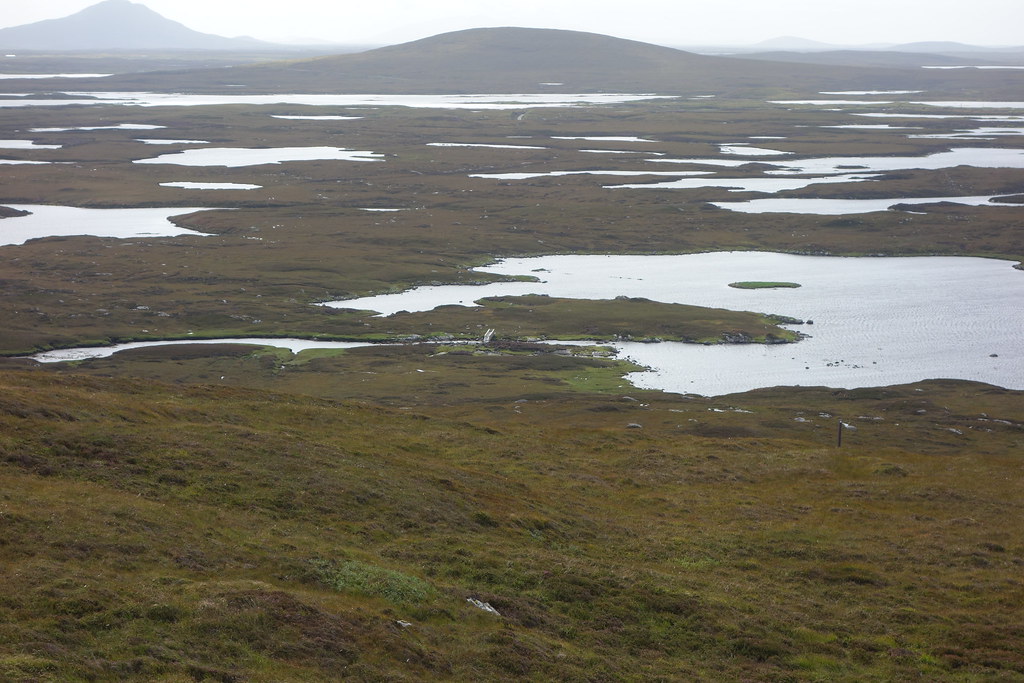 DSC01538
The Causeway across to Berneray 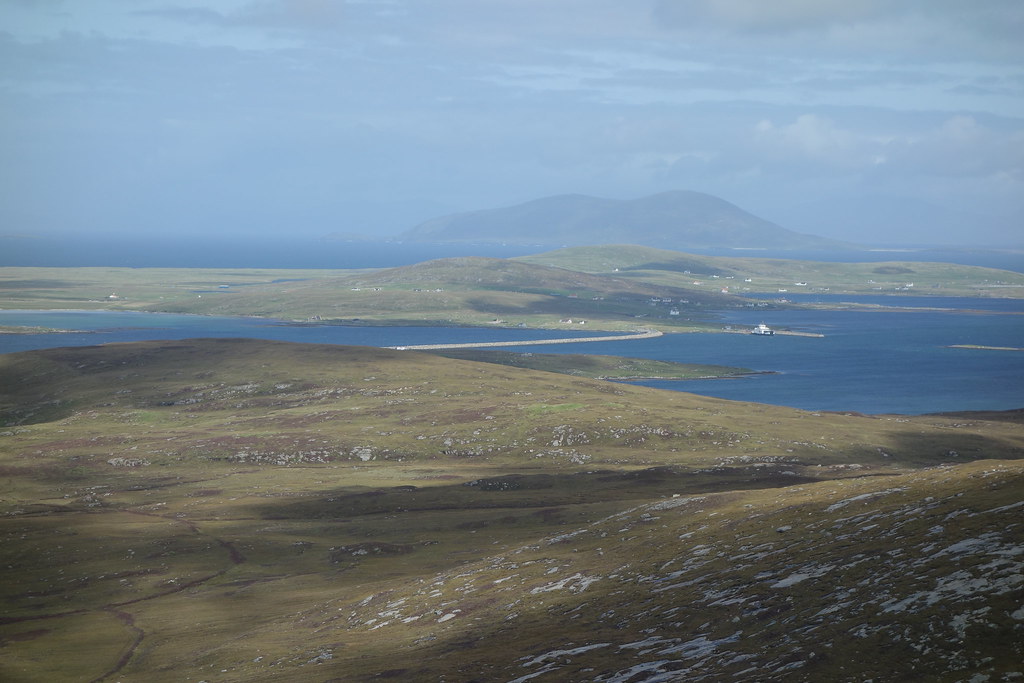 DSC01541
The path down from Beinn Mhor 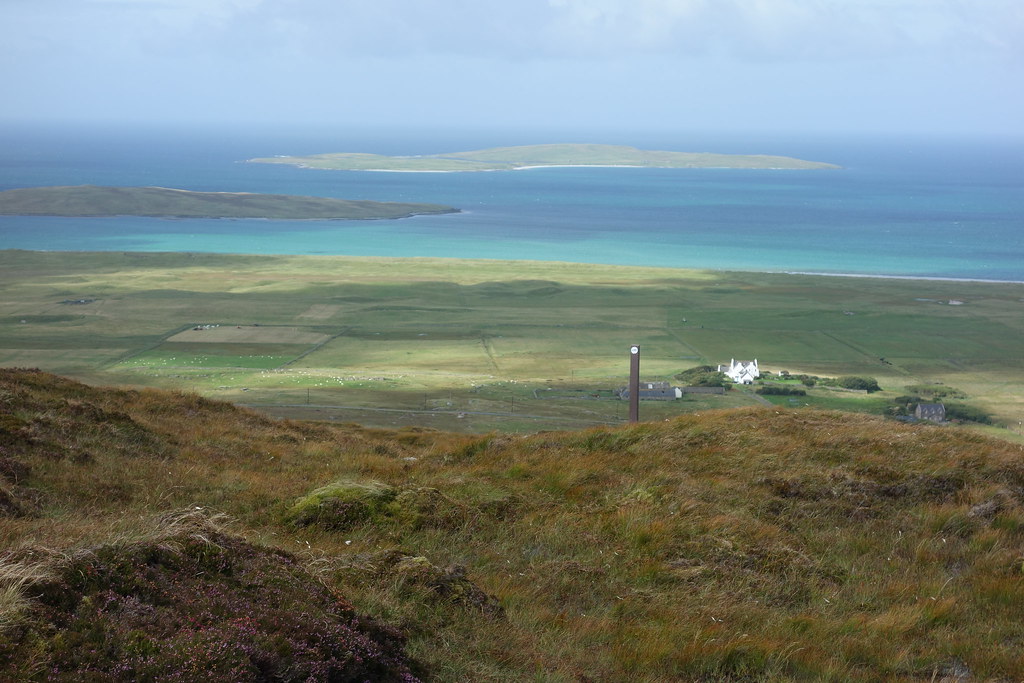 DSC01542
Tuesday 29Th August. Leverburgh to Horgabost 10 miles.
Another late start for a shorter day. Left the hostel around 8.30am and walked down to the jetty where there is a butty van, which is an old coach. Had a second beakfast and was on my way around 9.30am walking the "peat road" to where the way is signposted overlooking Loch na moracha. The first section of the path is gravelled and easy, the next section all the way up to the col is on a raised turf path which had recently been created. This kind of path has lasted well in the Islands but the new sections have not had time to bed in yet. On top of that there are livestock on the moors and they tend to use it as well so more work might be needed if its a wet winter. Dropping down to the road I found to be boggy. Once on the road it was a 2km walk to Scarista house. Feeling tired from the moorland walking I was so tempted just to follow the road around to Horgabost and wished I had. Instead I left the road and began climbing up by the marker posts. Very soon you join the remains of a sunken wall which you cannot walk on and such is the height of plant growth on the down side it hides holes and rocks and is impossible to walk on also. The top side of the wall are usually boggy as they stop drainage. This stretch lasts for about 4 miles and needless to say I didn't enjoy it one bit. getting to the road that would have led to Horgabost I was directed by the resident of the first house to keep walking and to follow the signs. I did shout that I wanted to go down to the beach but was still directed by the posts. The trouble is that the posts are the continuation of the route and don't go down to Horgabost so I ended up walking through fields and climbing gates to get onto the road. I felt frustrated at this but this was quickly dispelled by getting onto Horgabost beach and camping. what a place. I had been here in 2012 in a campervan and it was great to return. 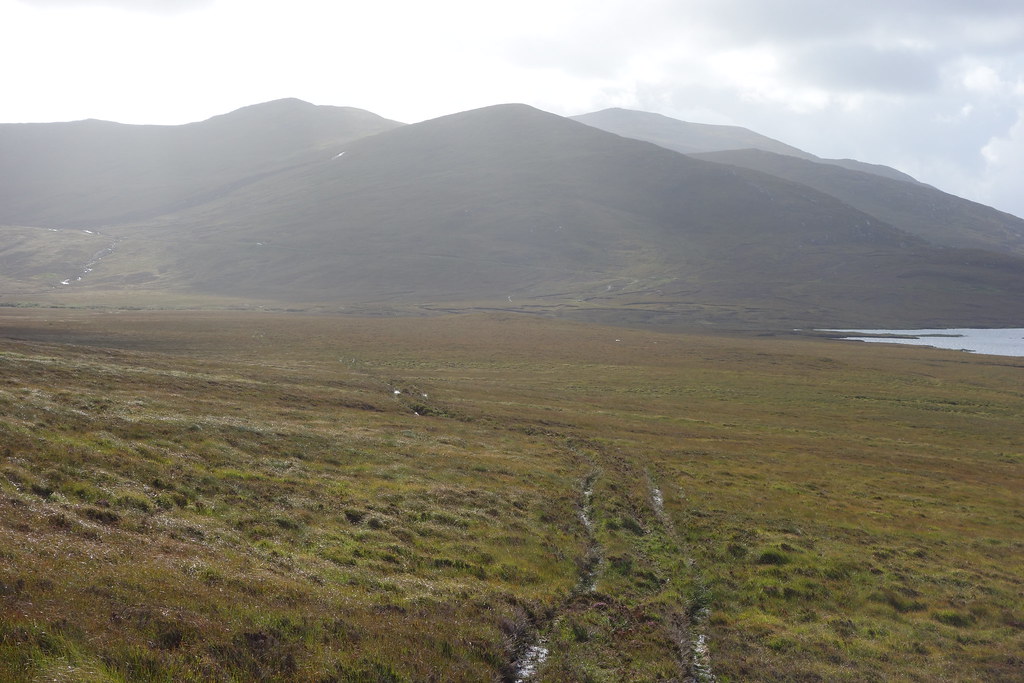 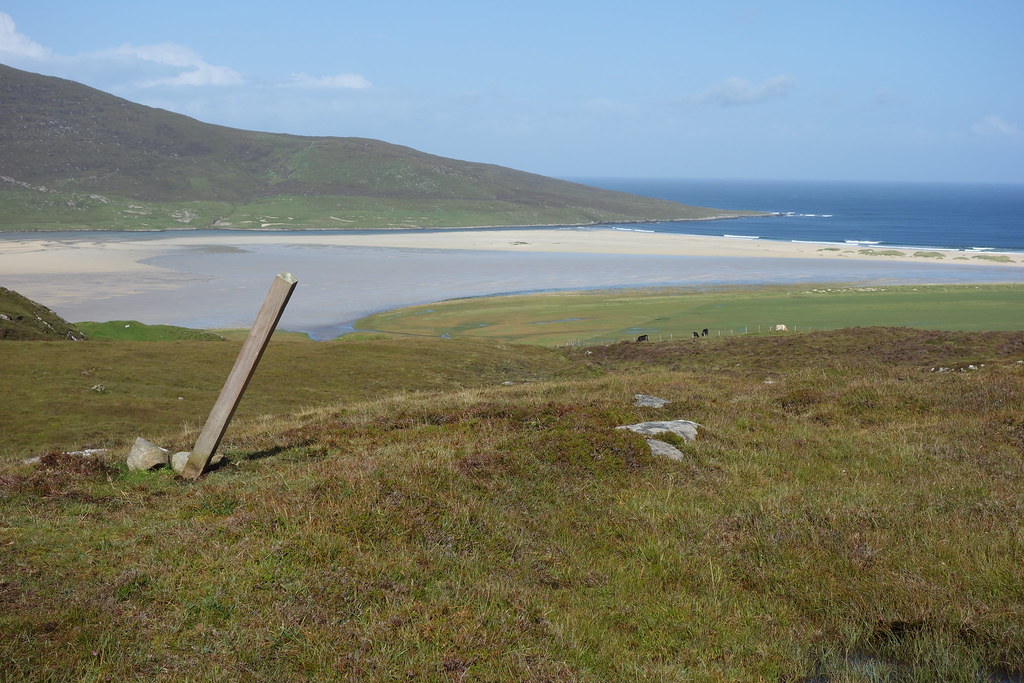 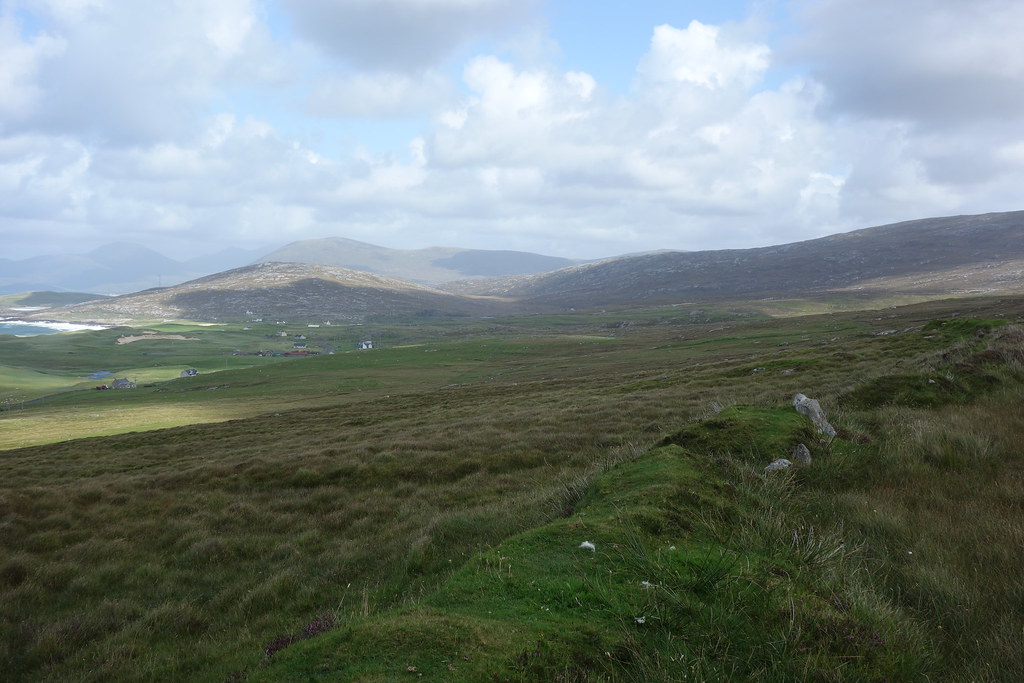 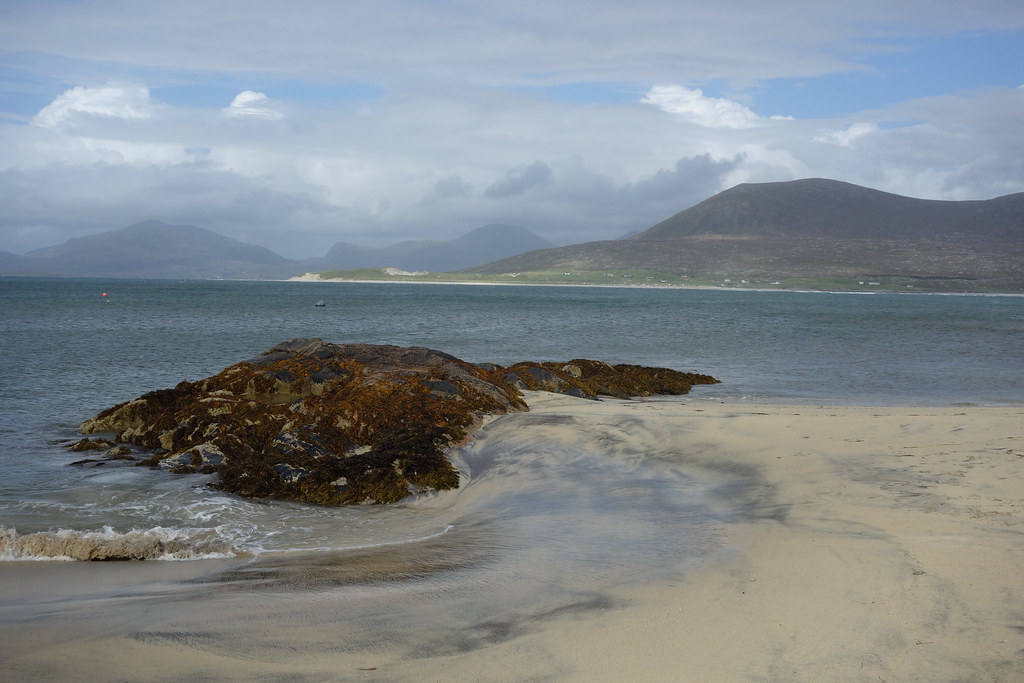 DSC01565
Wednesday 30Th August. Horgabost to Tarbet 17 miles.
This morning I gave the return to the route a miss. Instead I took the road as it wound its way around the bays towards the coffin road. I was onto the coffin road within the hour and began the ascent on decent tracks up to the col where the book states there are 2 benches but I could find neither. The track on decent ground continued over the col down to the road. the path does veer off to the north but I opted for a short road section up to Aird Mhighe. There is a café here but it was shut (11.30am). From the Harris walkway is joined. This is a superb path, built on turf years ago, very well established and level to walk on. The miles passed easily on this stretch and soon I was at Greosabhagh where a 2km road stretch awaited before a further stretch of the walkway takes you to Plocrapool where there is a bunkhouse. You walk 4km on the road before taking the path at Meavag where the path clambers over the shoreline before re-joining the road for the drop into Tarbet. There is a bunkhouse (£20 including breakfast), 2 shops, fast food van and a hotel with public bar all of which I used. 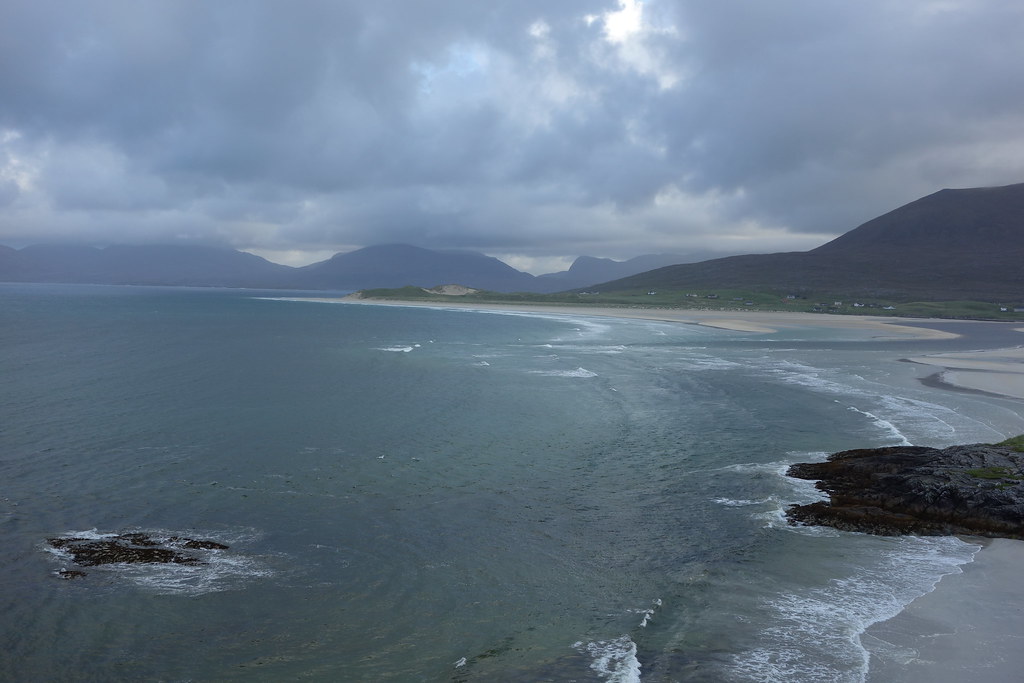 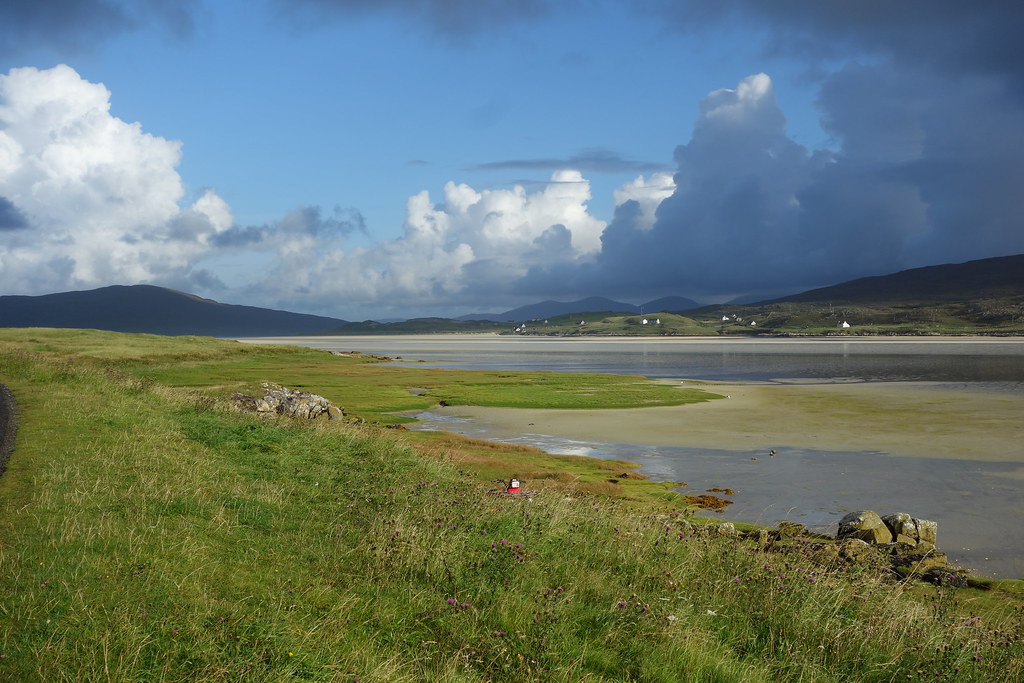 DSC01574
Start of the Coffin Road on the Harris Walkway 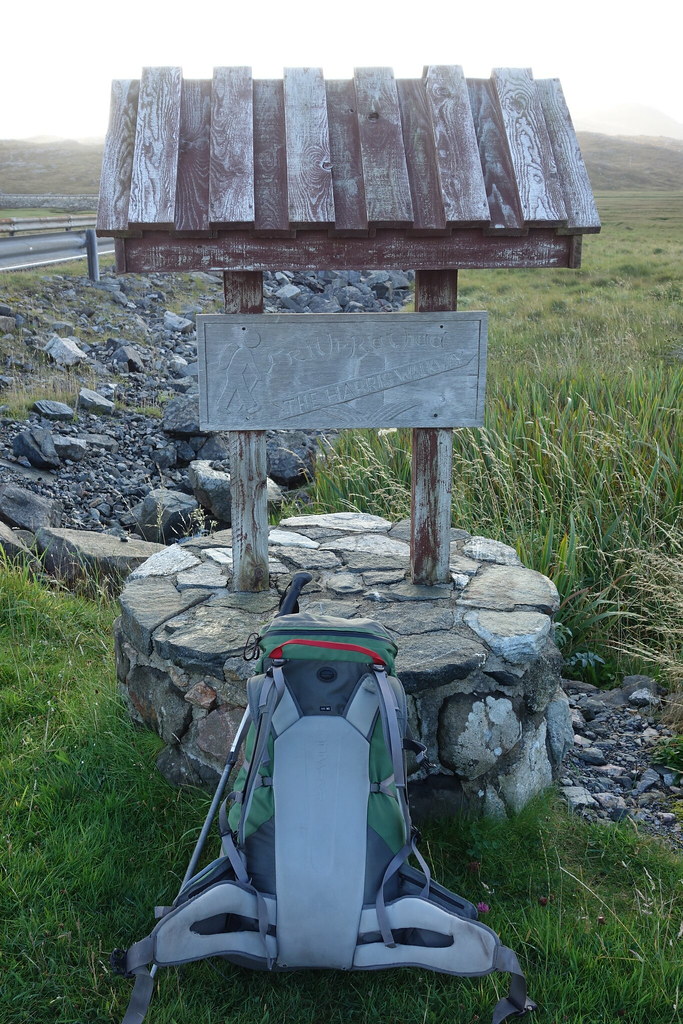 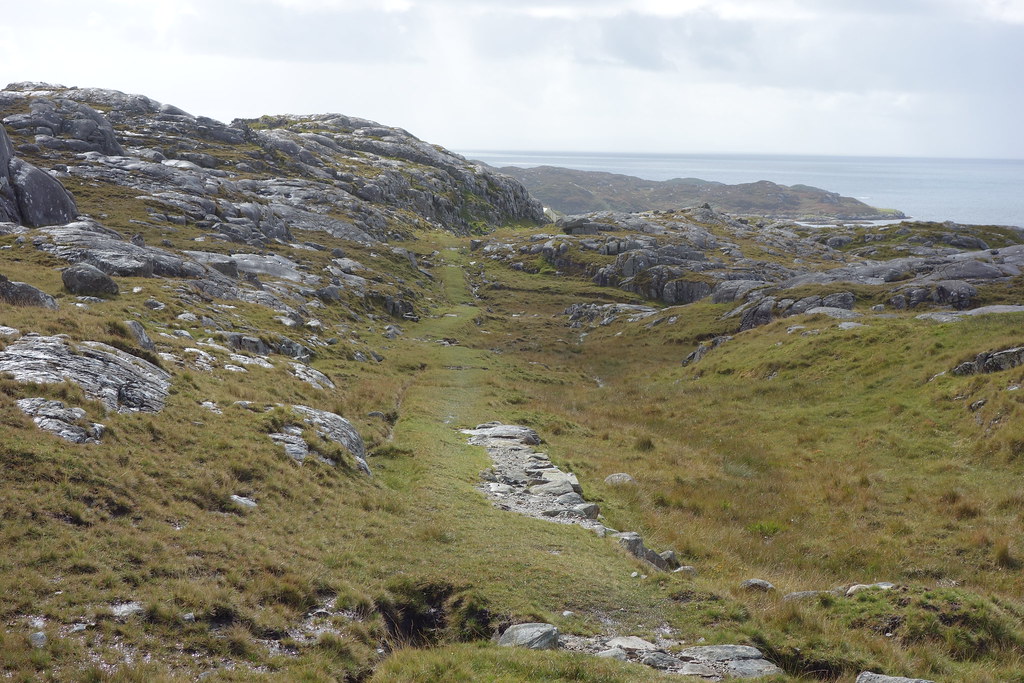 Thursday 31St August. Tarbet to wild camp area Nr Balallan 20 miles.
2 days to go and 40 miles to go so it was a rough split with a wildcamp overnight. The first section is a road walk of 2km to Urgha Beag which leads onto a good path by the west side of Lochannan Lacasdail. The path is well drained and is easy walk. whilst walking I could see several cow pats so I expected to see cattle at some stage. When I did see them they were well off the path so I breathed a sigh of relief as I don't like being near them. Coming around a corner after that was this huge bullock grazing. Being nowhere else to go and no fence to get over I just had to continue. Luckily the bullock paid me no attention. I climbed up the path and was hoping for a view of An Clisham but not today. Rain started heavily and was to stay for another 2 hours. Across the moor and then re-joined the Harris Walkway which was boggy until the descent. On the top were the smashed remains of two benches, not burned just smashed and left. After the Harris Walkway re-joins the road it is a 5km road walk until you head off into the Aline woodland. From there, there is a gravelled footpath up to the top of Griamacleit and then a further gravelled path down to a boardwalk section. That combined with the old road gives fast access to Arivruaich where a path takes you onto the moor. The book states keep the fence to your left but the fence veers off left after a short distance and the actual path from the fence end is more like 2 o clock direction where you pick up a raised turf section which combined with short gravel sections takes you about 7km to the bridge over the Allt a Chorra Chnoic which I found the only raised bit of grass on the moor and camped on it.

Urgha Beag on the route from Tarbet 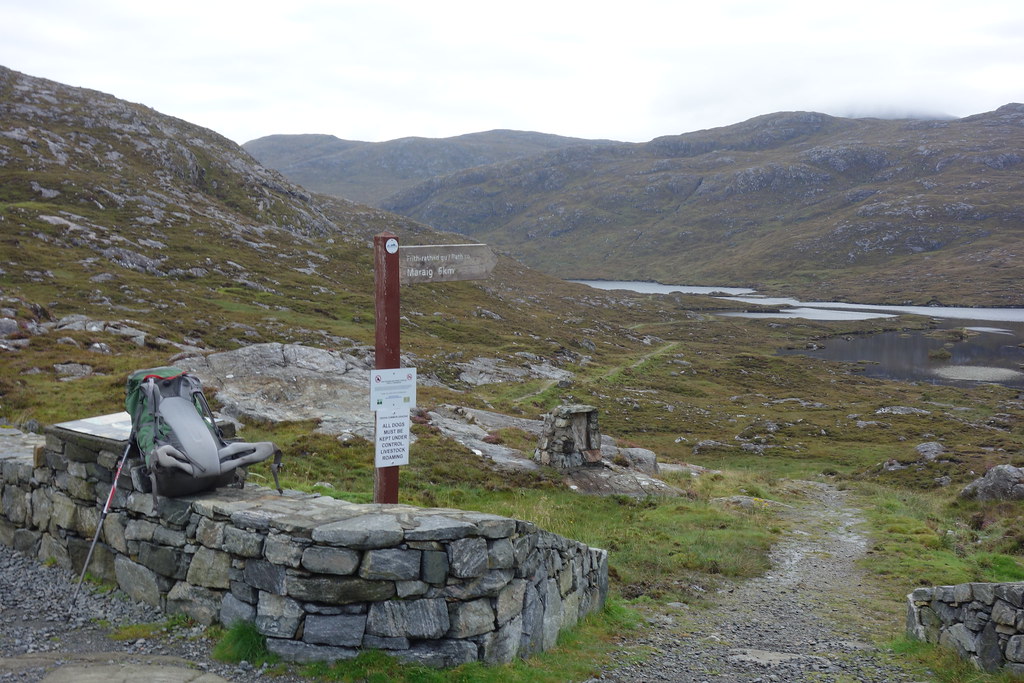 DSC01592
Lokking back to Lochannan Lacasdail. The path is seen to the right 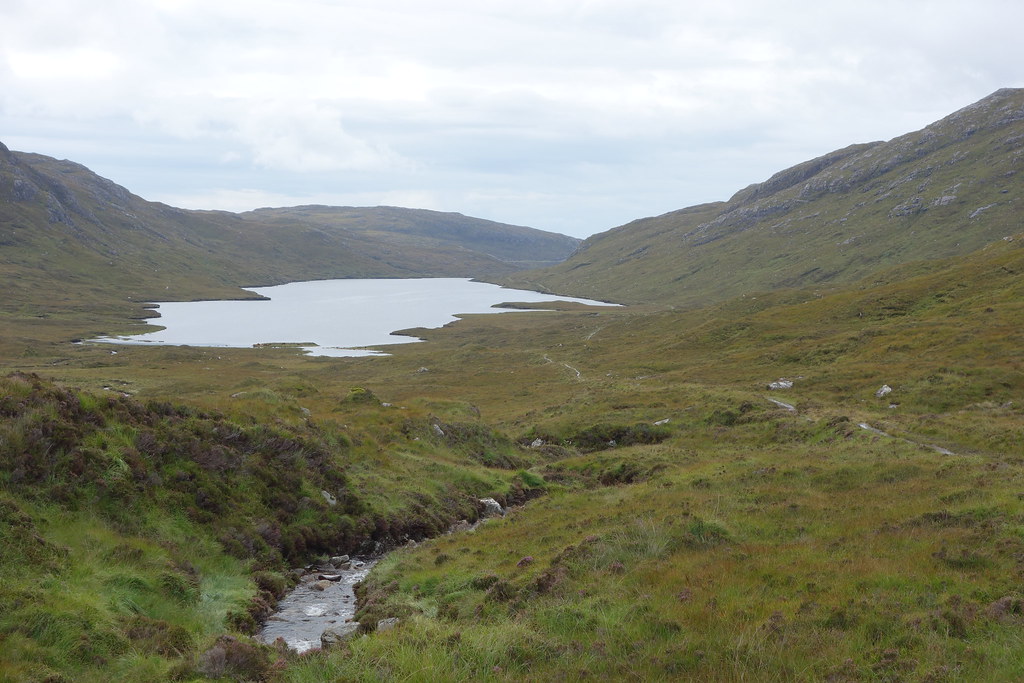 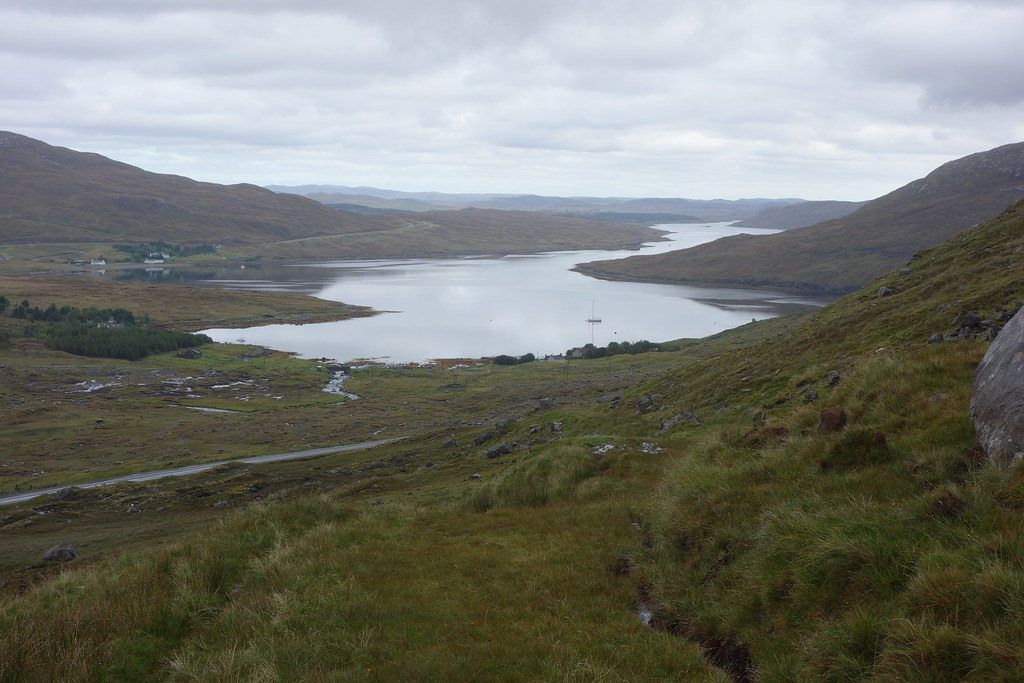 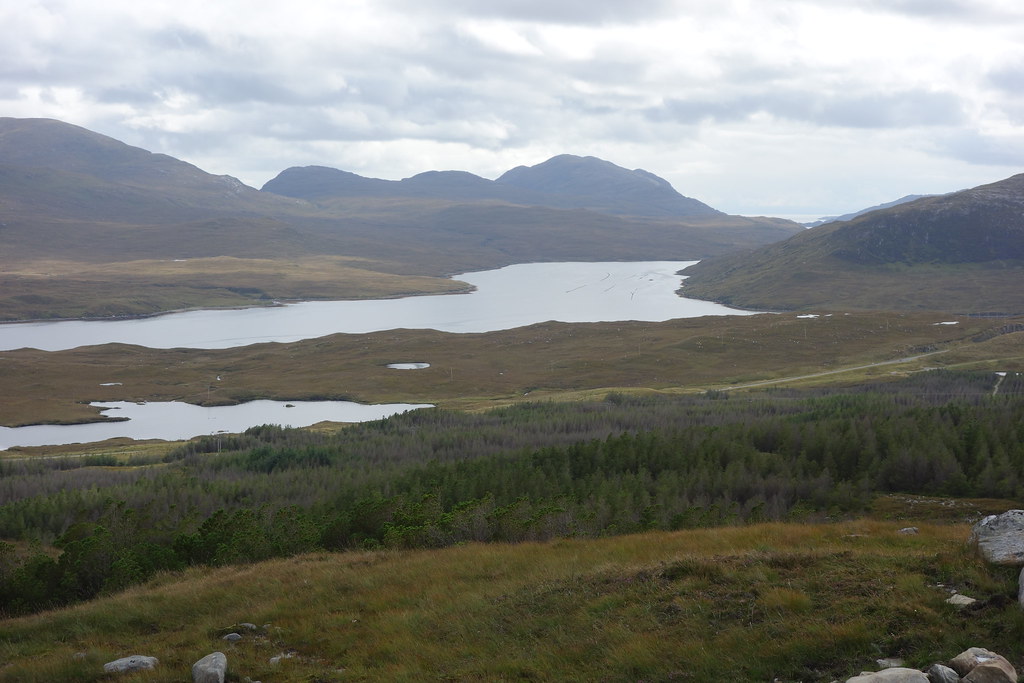 DSC01607
Section of boardwalk which made for fast progress towards Arivruaich 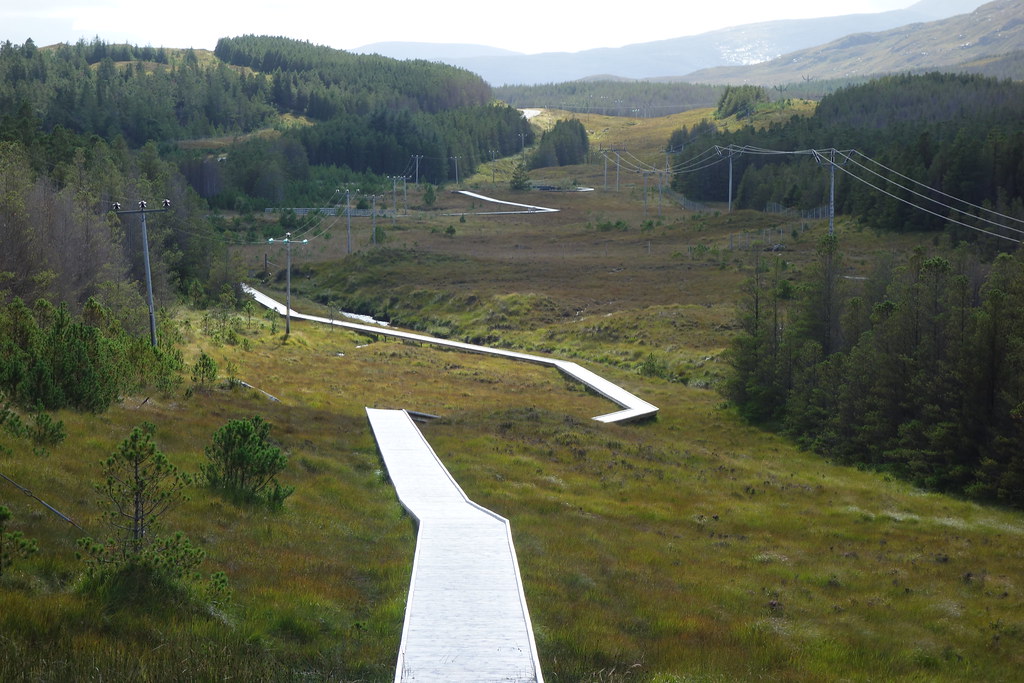 DSC01611
Friday 1St September. Nr Balallan to Stornoway 20 miles.
Awoke to a midge morning and it was the midge net on as I packed my gear. not hanging around I was away at 7.30 taking a photograph of the loch as I left. as it turned out the only photograph I took all day, not because of the weather but I was just getting on it with it. The way meets a track coming from Balallan as you come off the moor, rather than take the 2 deviations onto the moor I just walked straight on through Balallan and kept to the road until I got to the telephone exchange nr Laxey. There is a marker here for "Laxey path" and no way marker. The path follows the gravel track to the loch and when you hit the loch you stick to its shore (no path) until you meet a path on the NE side. From there it is about 6 miles on raised moorland turf track until you meet the road at Achamore. From there the road sign says Stornoway 9 miles, the book states 11km, I don't know which to believe. either way its all tarmac all the way into Stornoway. The path ends in the grounds of Lews castle. I looked for a waymarker for a photograph but couldn't find one so walked into Stornoway to finish. I hadn't booked the hostel as I didn't know what day I would finish and I was informed that the hostel was full. There is a campsite and bunkhouse at Laxdale 1 1/2 miles out of town but I didn't fancy walking further so it was into the County hotel for an overnighter. Next day was the ferry to Ullapool (£9.20) in perfect weather for the onward journey home.

Loch Stranndabhat on the route to Balallan 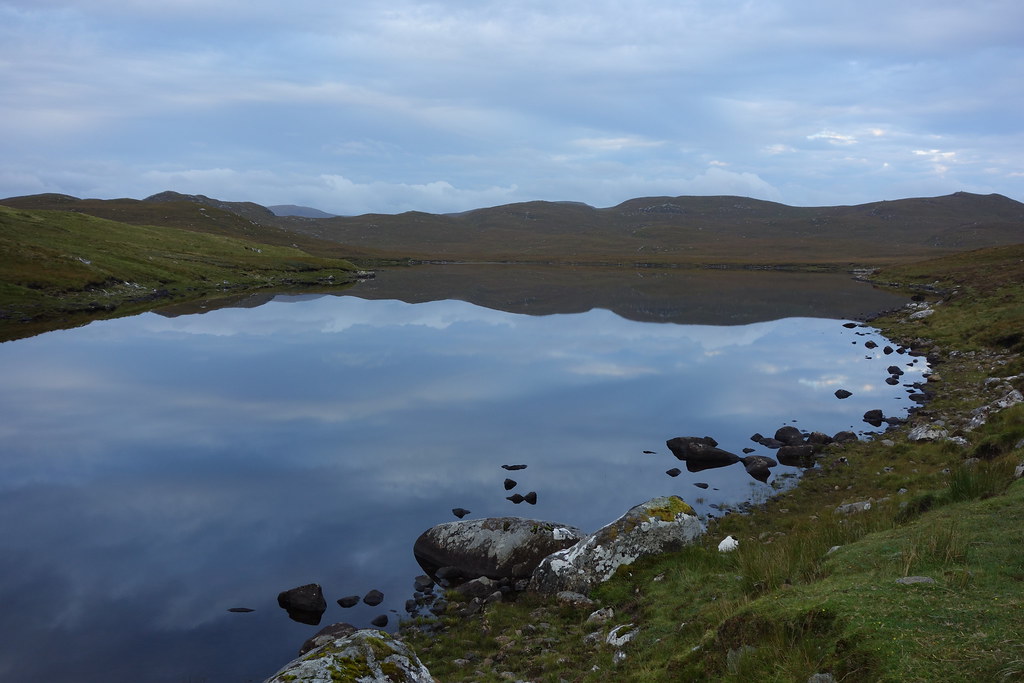 View back onto the mainland on the ferry route back to Ullapool. I think that is An Teallach left of centre? 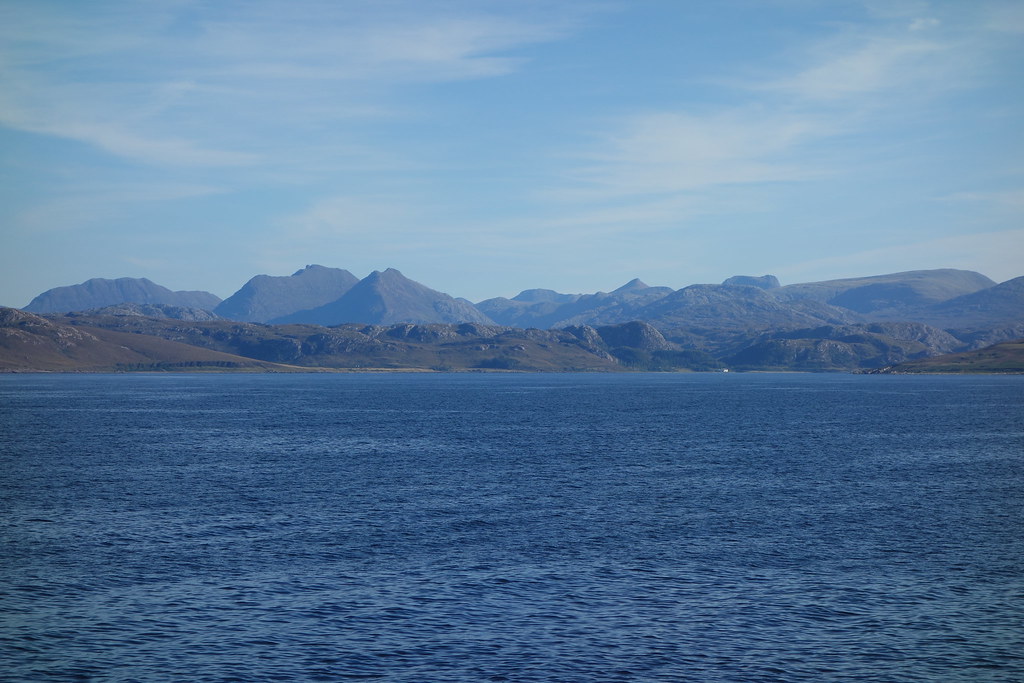 DSC01622
My thoughts on the route? I certainly wouldn't hurry back to do this route. There are some great sections but some awful where marker posts have been stuck in, in the direction you need to travel in and there is no actual track and too much tarmac even though I added to it. Some tarmac sections for instance over Grimsay cant be avoided but where there could be options i,e into Lochmaddy there are no alternatives. The newly constructed sections of raised turf path need to settle down a bit and that will take time. Having said that the islands hold an attraction for me, ferry travel and bunkhouses hold an appeal to me and I certainly will return to some of the areas, might even take a car over to Harris and do some hills