Another pre TGO warm up. I was booked into the WH meet at Braemar YH on the weekend so rather than drive made the decision to book some train journeys and make a Cairngorm round trip of it. The trip didn't go as planned due to the amount of soft snow on higher ground but I was still satisfied with ground covered. First day as usual was the train journey and a half days walk to the first overnight stop at Ryvoan bothy. Got to Aviemore around 1pm and after a few coffees made off up the logging road which on a quick pace can get you up to Glenmore in a couple of hours. I was carrying a full pack, enough food for 4 days and some firelogs for the new stove at Ryvoan which had just been fitted over the weekend. Got to Glenmore in the two hours and after a further coffee made up off towards the bothy passing the green lochan on the way. I was the only one in the bothy. A load of coal had been left by the work party from the weekend so it was on with the fire straightaway. I was joined around 6pm by two women who had been on the neighbouring Corbett Meall A bhuachaille who on descending had seen the chimmey smoke and came into get warm 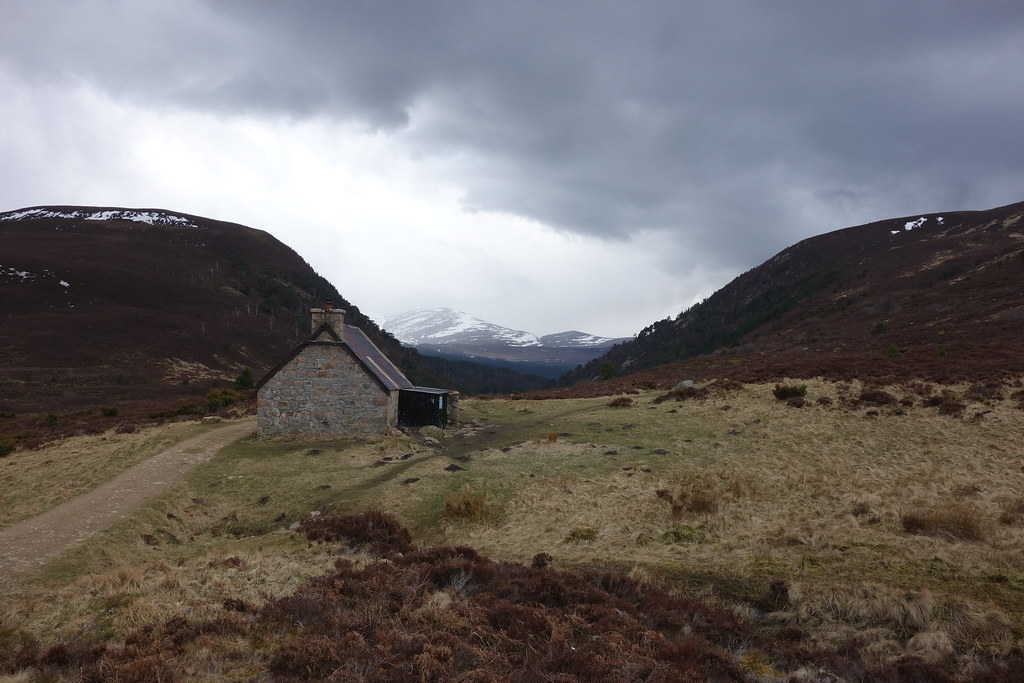 DSC02413
Next morning it was around to the footbridge nr the sight of the former Bynack stables then up onto the shoulder that takes you towards Bynack More. Here I got the first taste of how hard it was to walk in the soft snow that was higher up, the full pack making it harder. Continued on passed the path to Bynack more and then dropped down to the Fords of Avon refuge. I could have stayed here but it was early so I continued on for a few more miles down Glen Avon towards Faindouran bothy. It had started to rain so I had put on waterproofs. As I placed my rucksack on the floor I caught site of my first ever adder lying by the path about 10 feet away. Got to Faindouran wet and cold and again on my own. A study of the bothy book showed there had only been 15 visitors that year to this remote bothy. There was nothing to burn, so after changing and food it was into the sleeping back to get warm 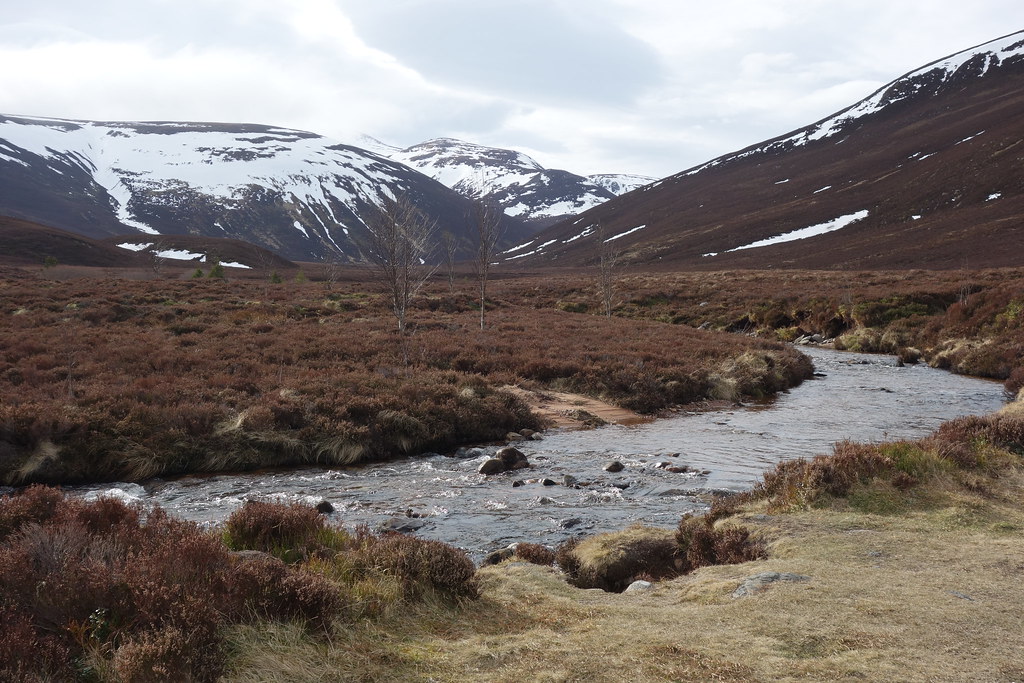 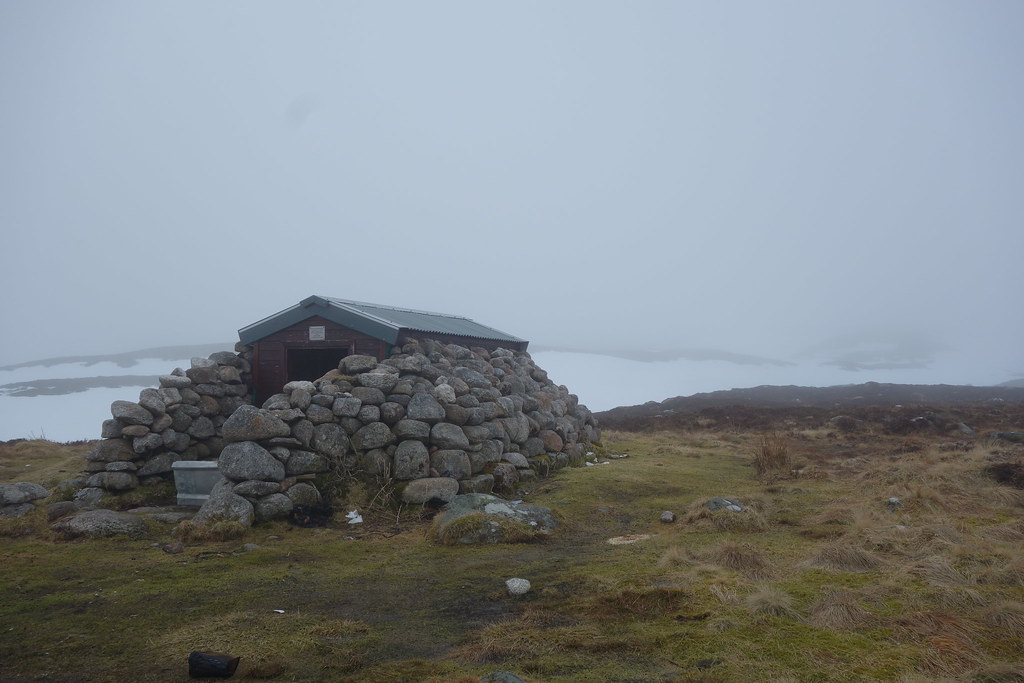 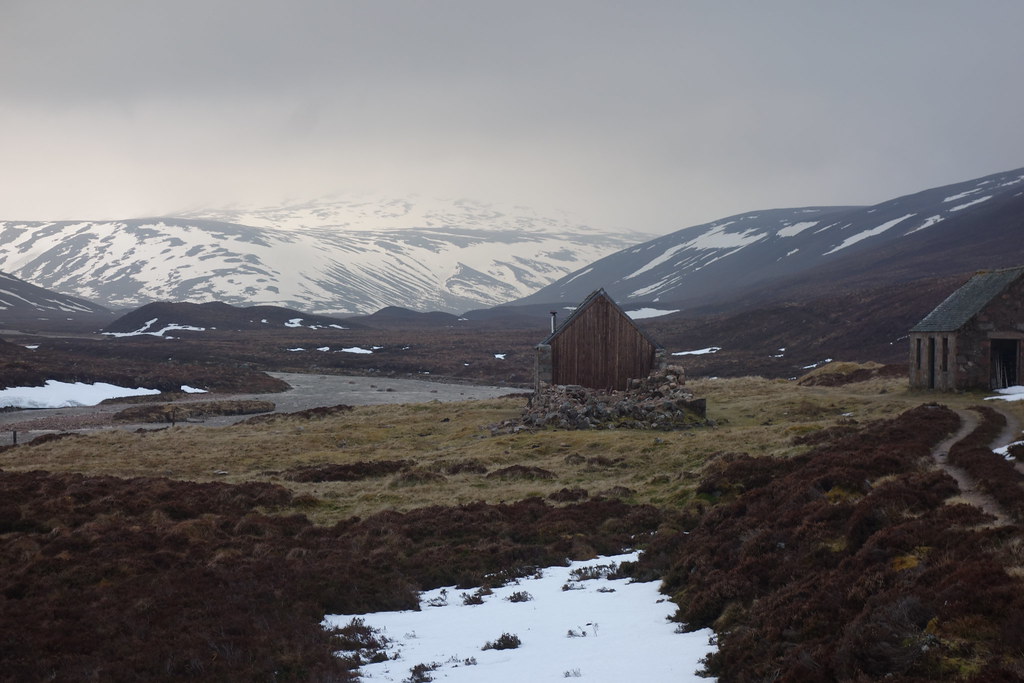 DSC02426
The next morning was dry but cloudy with a strong wind. I had loosely planned to go onto Ben Avon / Bhuird but the soft snow the day before made my mind up so it was a low level walk through Glen Avon all the way down to the Lin of Avon and then up Glen Builg towards Glen Builg. I had though of camping here but I had made good time so had a look at a path on the north side of the River Gairn going towards Gleann an t - Slugain but was disappointed to find a padlocked gate so it was an estate track going up over the shoulder of Culardoch. Any thought of doing this Corbett were swiftly abandoned as even the 4 x 4 track was hard work and I had to walk on the heathery bits on the sides. Once over the top of that it was quick walking to an overnight camping spot in the woods above Invercauld. 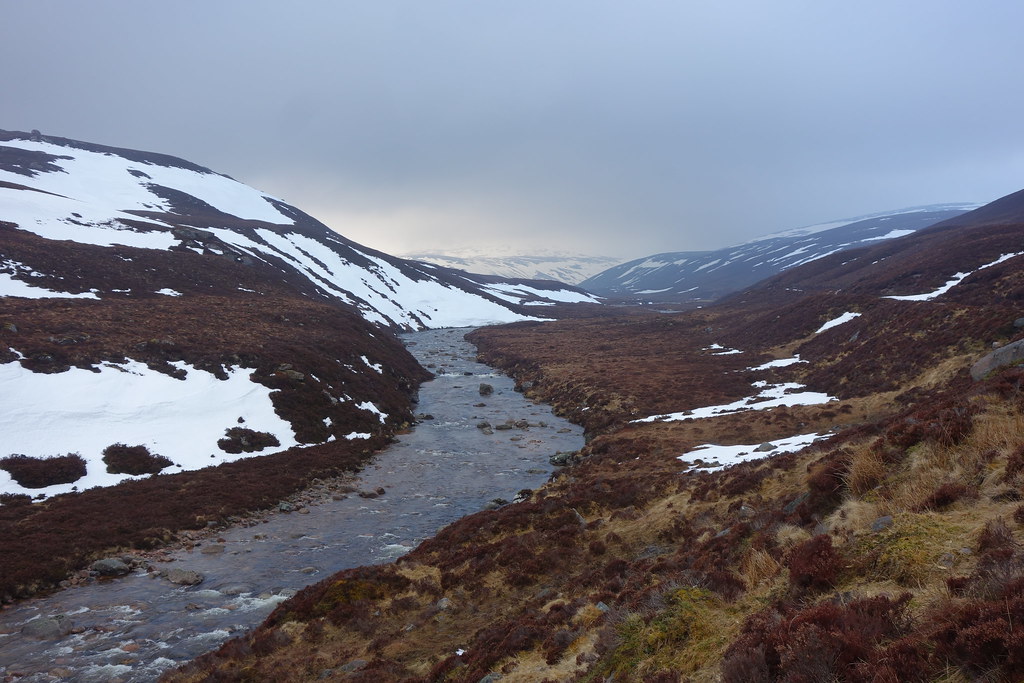 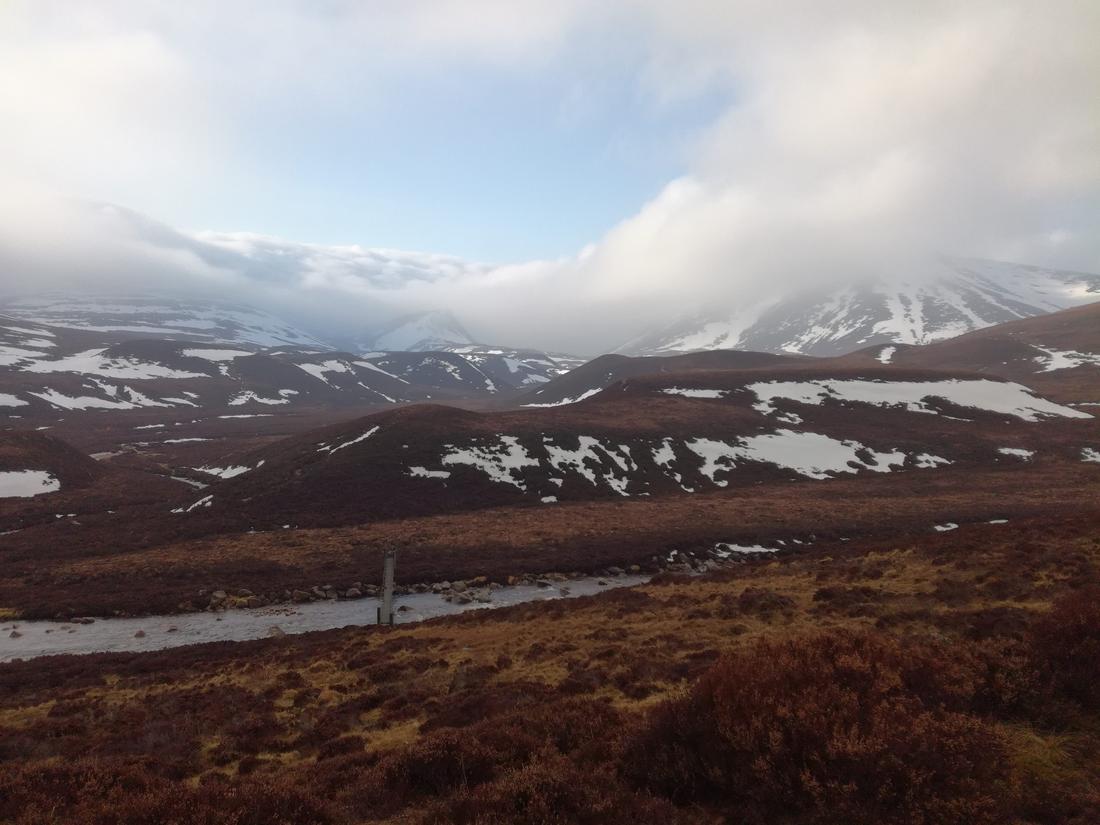 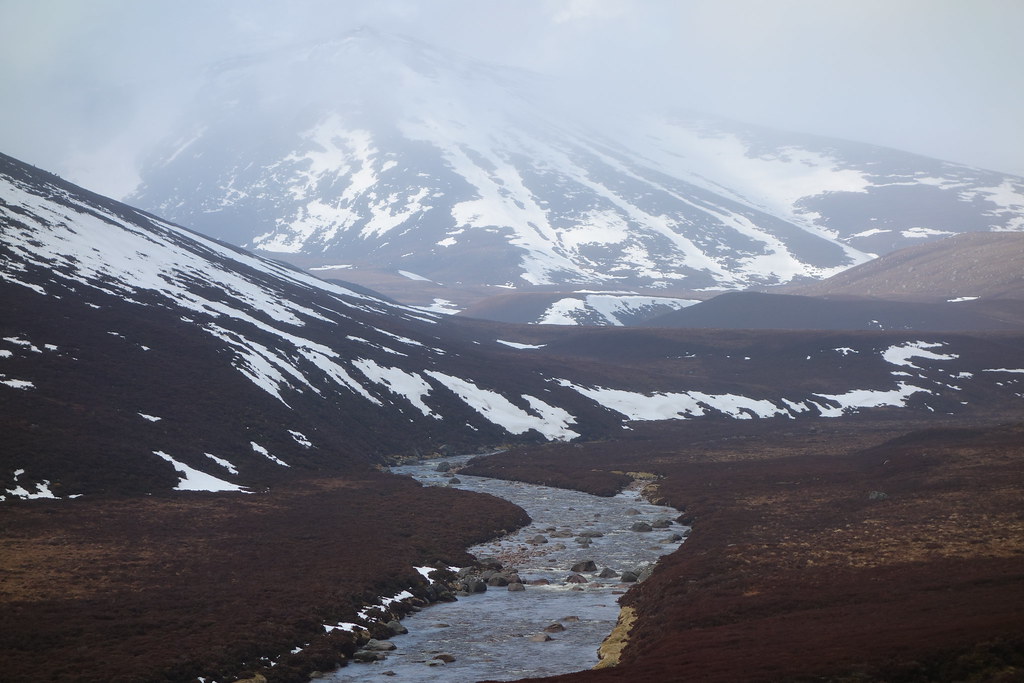 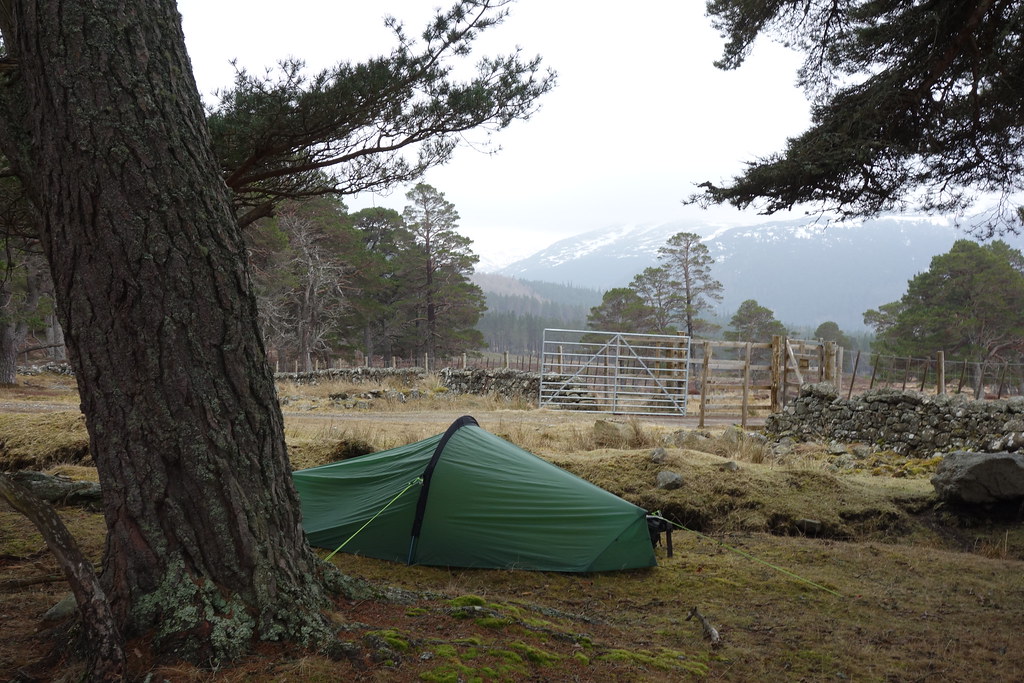 DSC02441
Next morning was a beautiful Cairngorm morning, warm and sunny. quick paths made for good progress down to Invercauld then it was across the road and into Ballochbuie forest where it was easy tracks all the way up Geldie lodge bothy. The views were superb as I walked, initially across to a snow blanketed Ben Avon and the up towards Lochnagar. People were already in the bothy and in true tradition had the stove and kettle on. They were day visitors and left around 6pm ,leaving coal behind. With the refurb of the bothy and the stove on since 3pm it was the warmest bothy night I have had in years. Got a visit from special branch during the evening comically trying to blend in office shirts and ties and outdoor jackets. My plan to go to Breamar had been to drop over to Loch Muick and then over towards Callater but the snow put me off so on the Friday it was a short half day to Braemar going back the way I had walked in. 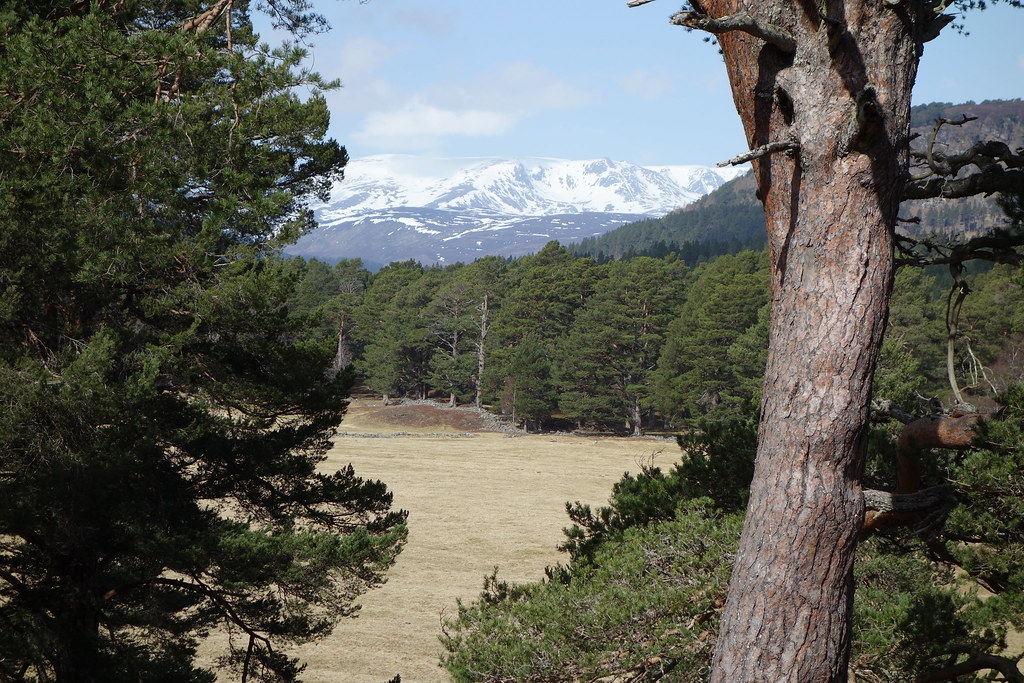 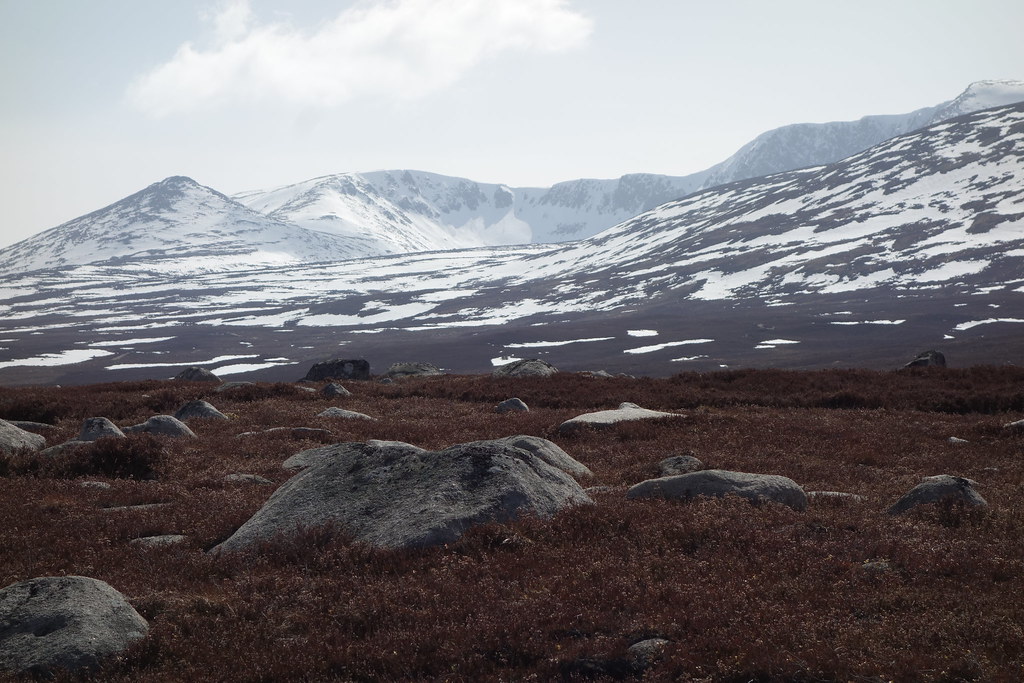 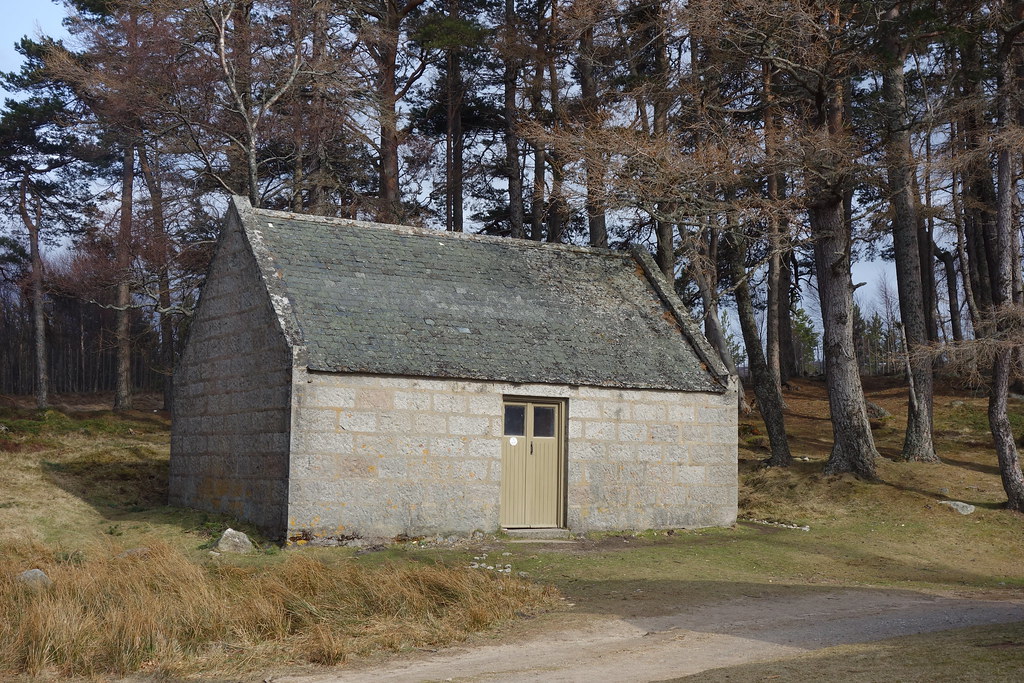 DSC02454
I had initially planned to a day walk at the WH meet on the Saturday and then do a 2 day return to Aviemore over the Lairig Ghru but didn't fancy the high ground over the Lairig due to the snow so ended up altering the plans to leave on the Sat morning and do a 2 1/2 day return via Feshie and Geldie. SAt morning set off and walked the road to the bridge to Mar Lodge estate. Through the estate and then the road to Linn Of Dee. From there it was easy tracks to white bridge and onto the Red house at the confluence of Tilt and Feshie for an overnight camp. 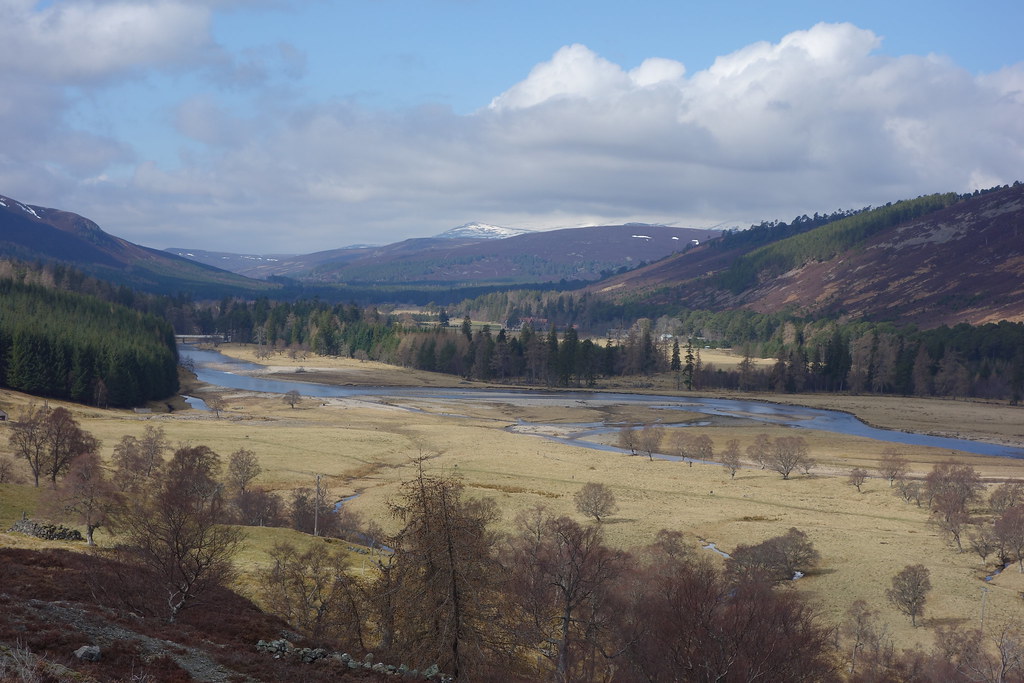 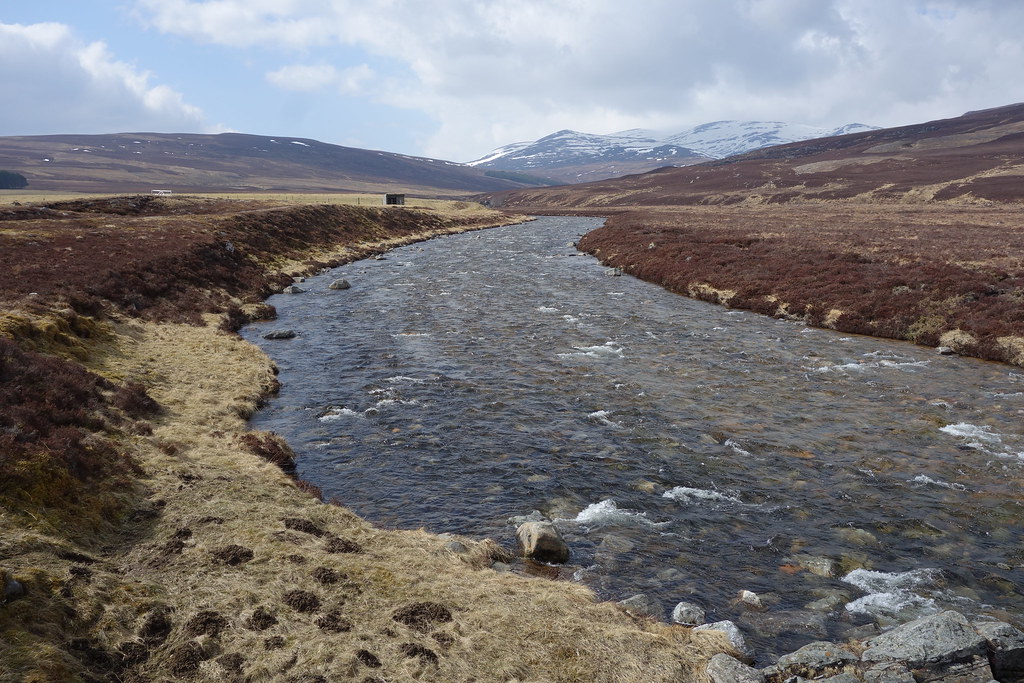 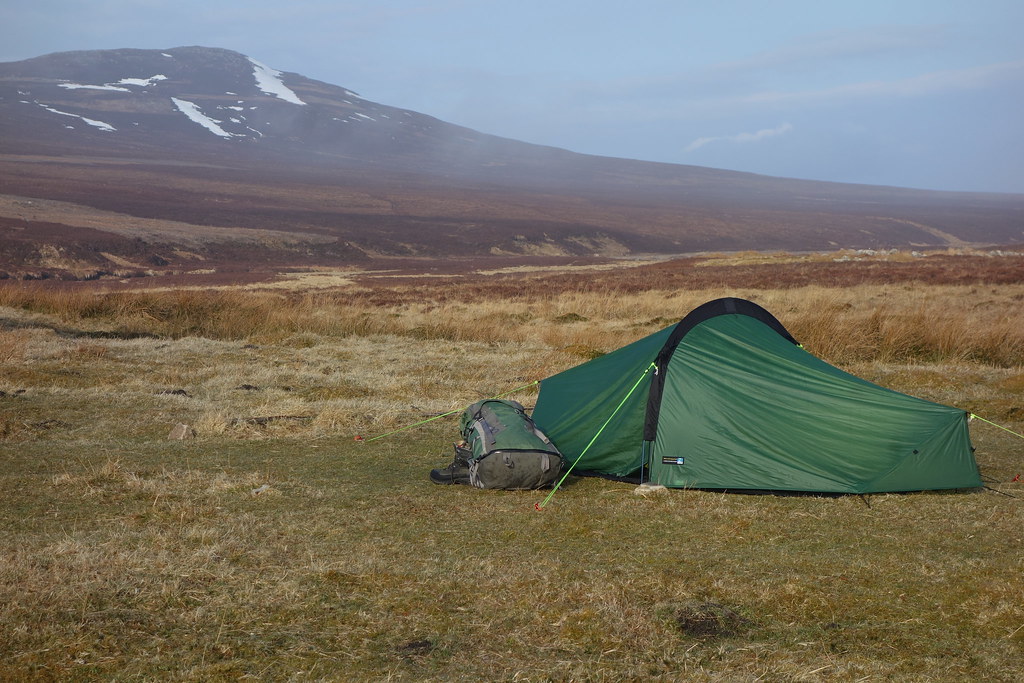 DSC02467
After hanging around for an hour to dry the tent, it was up the Geldie , passing a favourite camping spot at Geldie Lodge and then over the Eidart bridge and down into Glen Feshie. Sitting down taking a break on the drop down into Feshie an adder crawled out between my feet and turned when I let out a few words!I then droped into and got to the refurbished Feshie bothy. Present inside was the MO, Lindsay, who was good company and good with the coffee pot. 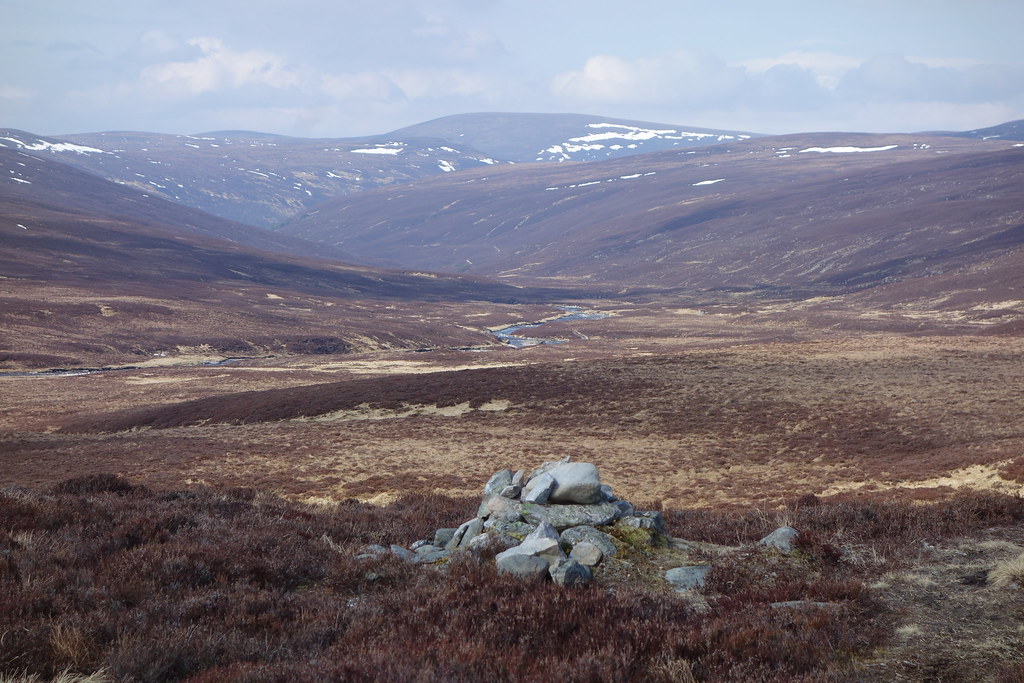 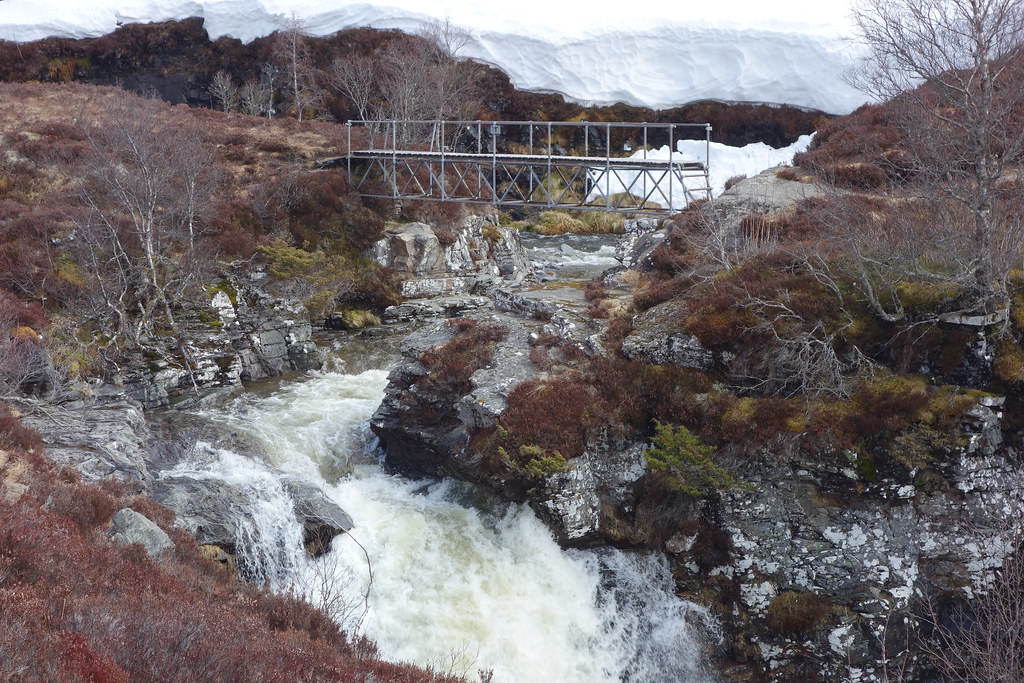 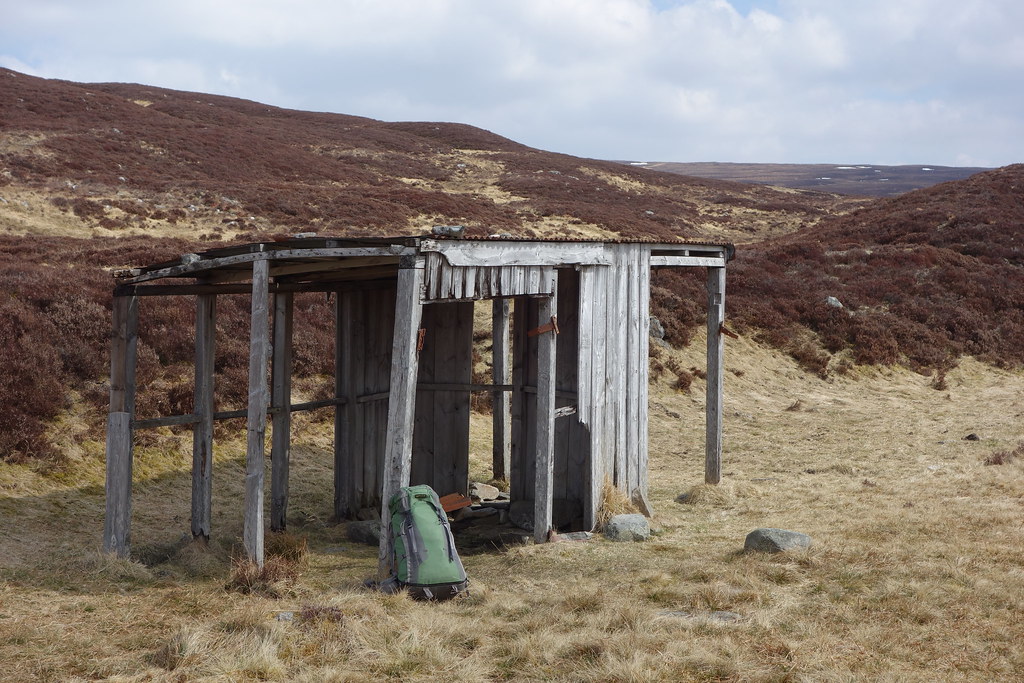 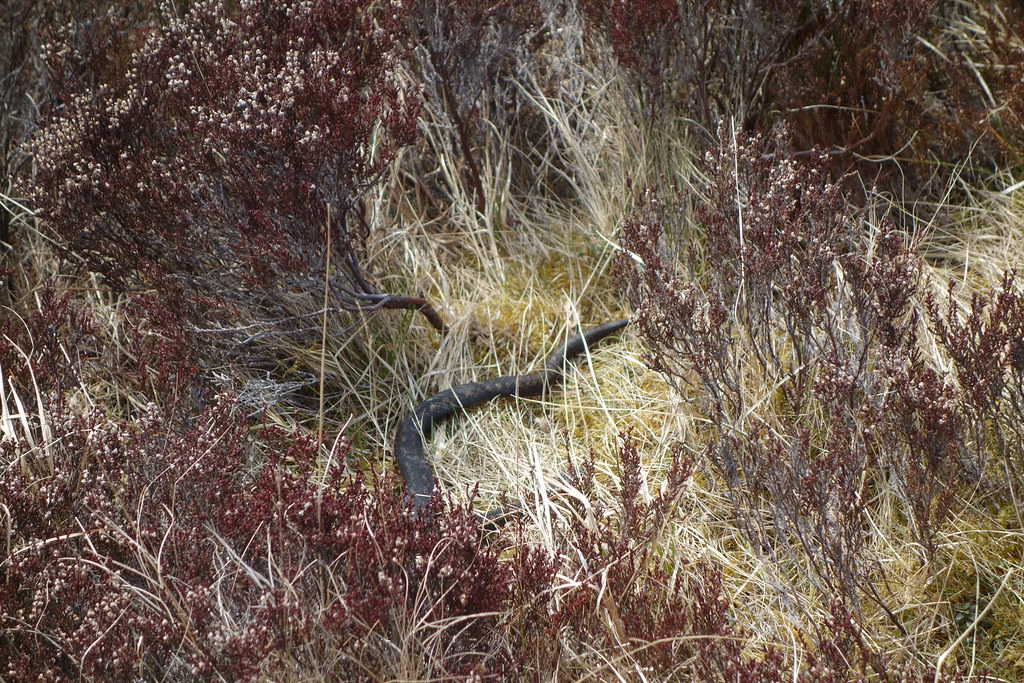 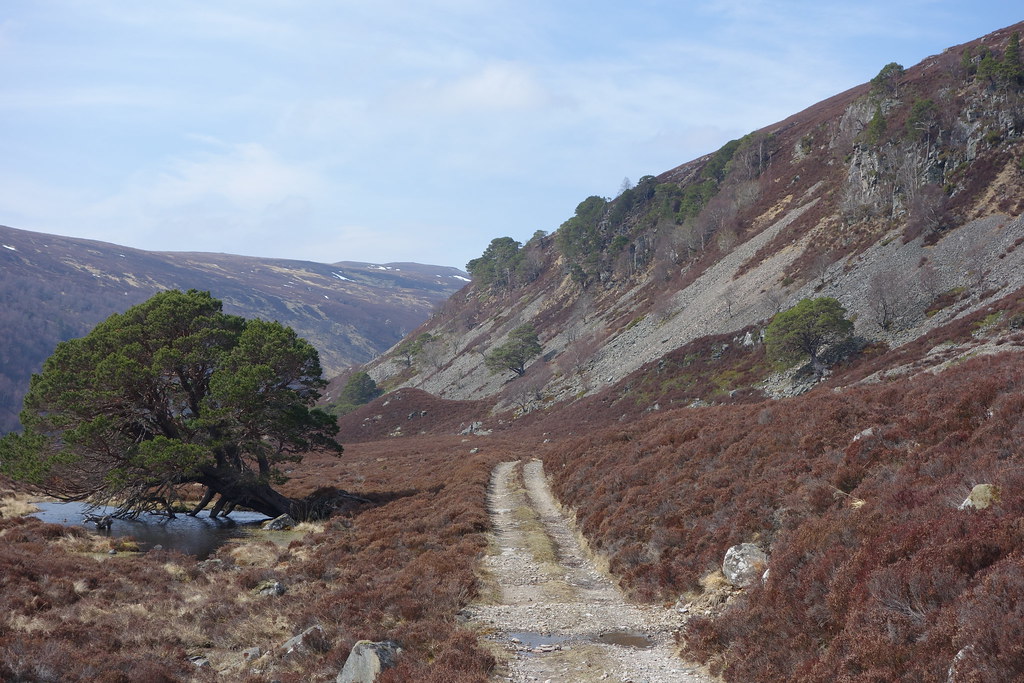 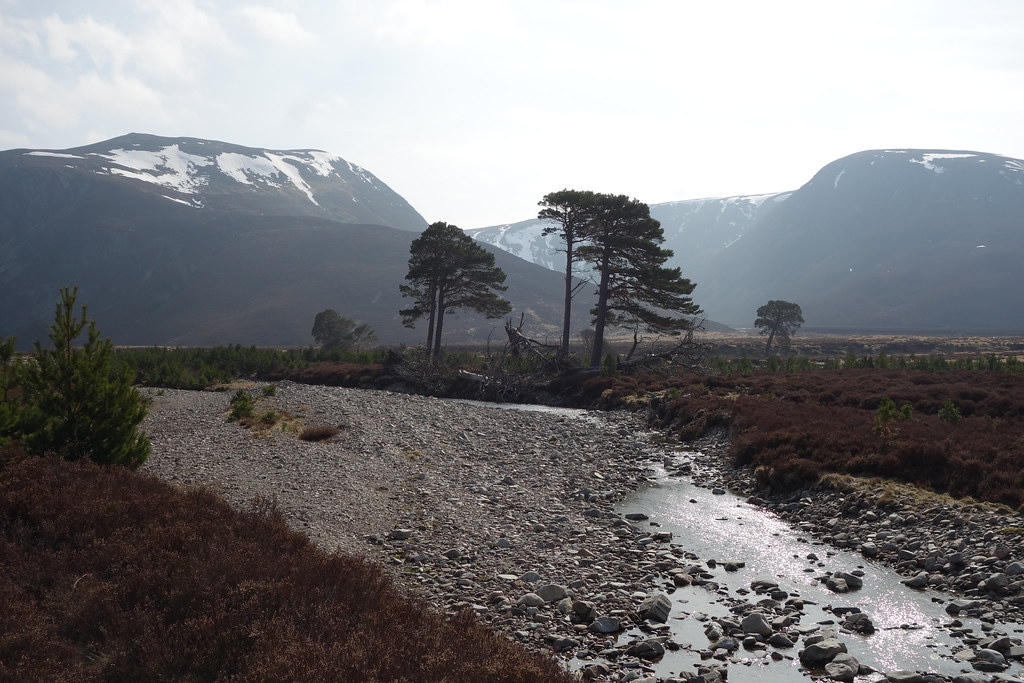 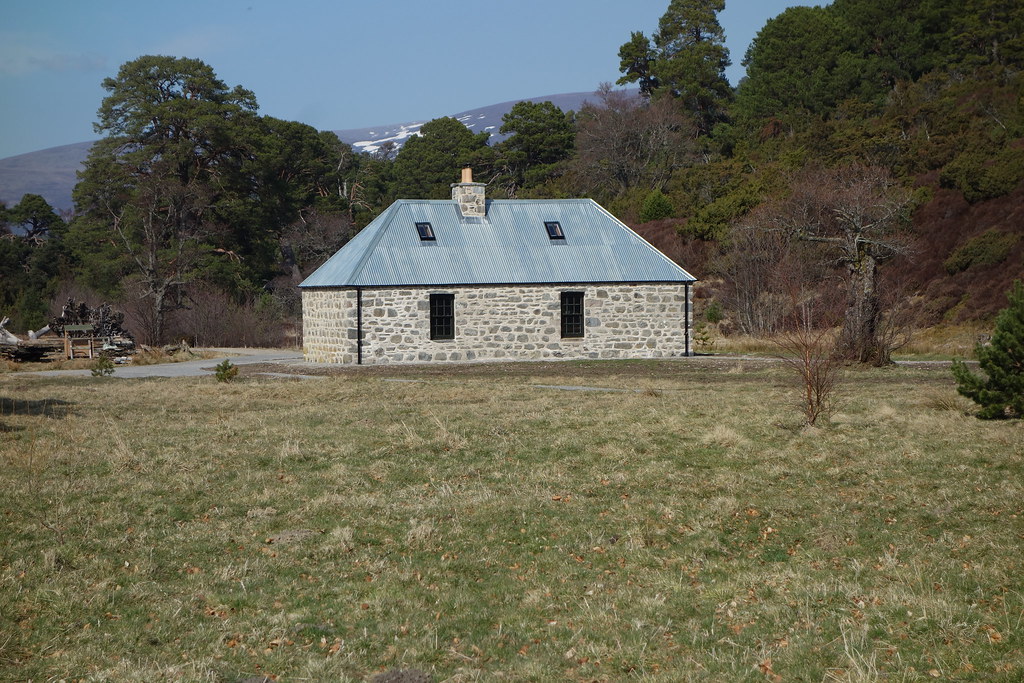 DSC02495
Set off around 8am the next morning for what take 6 to 7 hrs to get to Aviemore where I was booked into the Bunkhouse. Walking up the glen I saw a mountain hare running up the track towards me and passing by me close to my legs. I was wondering why when I saw a fat old fox running about 50 yrds behind it. On seeing me it veered off and when off up the hill, without its food. From Achlean used the road and when I was able to, made my way through the Inshriach forest past the bothy and onto Loch an Eilein. From there it was an easy 2 miles to Aviemore and onto the bunkhouse for a shower and a few beers before the train back the next morning. 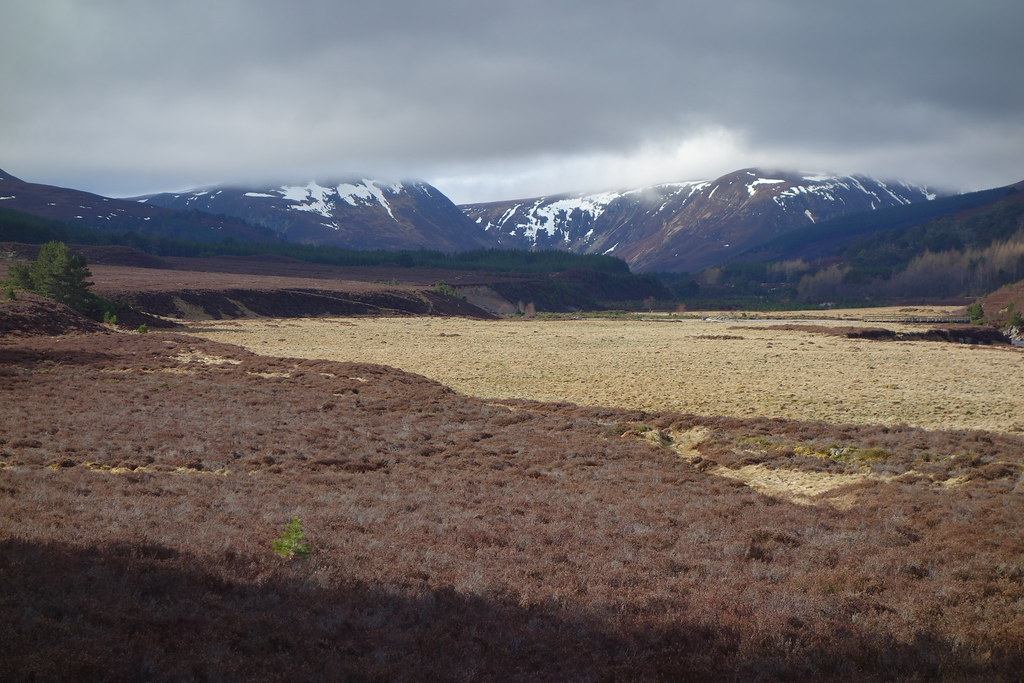 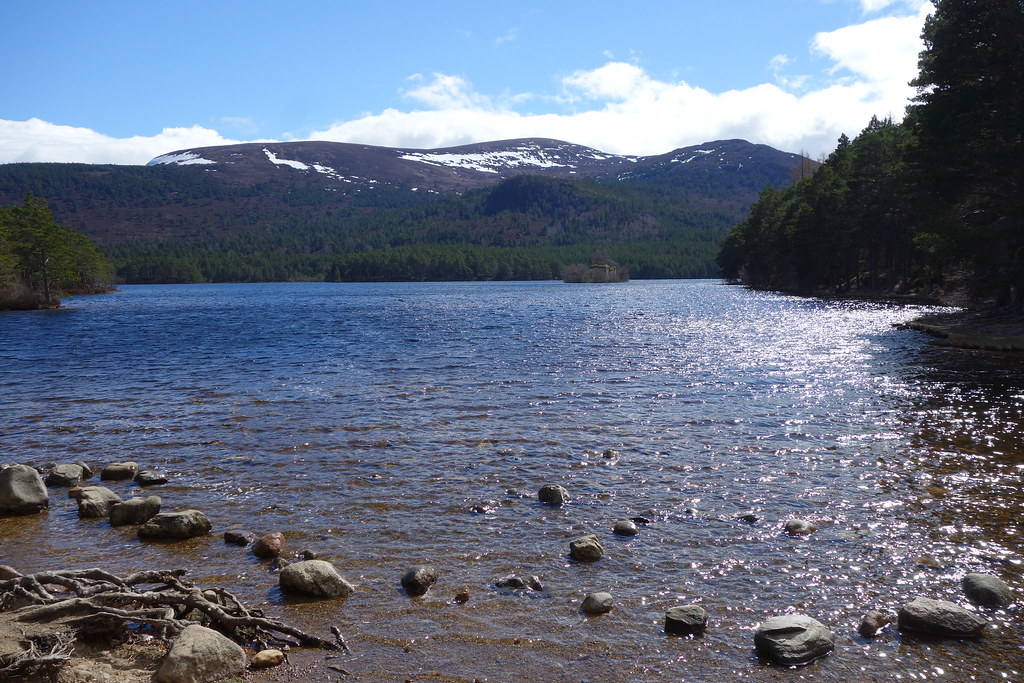