I'm getting there with filling up the gaps in my Scottish coastline - I've got from Berwick to Leith Shore now, and then a start again at Cramond bridge through to Queensferry, where I have only the village and bridge to go to link up with the Fife Coastal Path on the other side. So I'm working a bit backwards to fill in the gap, but I thought I would go down to Granton harbour, which is an interesting looking spot, and work from there, and leave the further part for another day.

One odd thing about the approach to Granton is that you come across a little lighthouse, or leading light, a long way from what is now the sea front - the building apparently once belonged the the Northern Lighthouse Board. 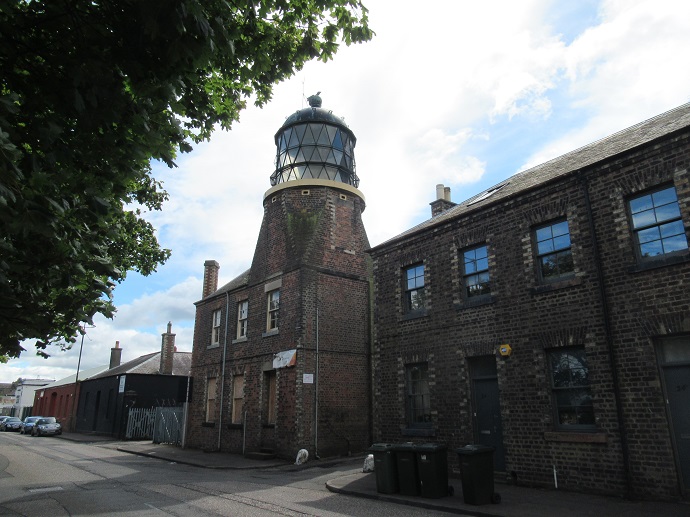 It's actually fairly obvious on the map what is reclaimed land between the two breakwaters, but it's not really so obvious on the ground, where some of it is built over with warehouses and enormous shops - you come quite suddenly on the open eastern side of the harbour, an attractive expanse of water now containing the Royal Forth Yacht Club, and with Leith trying to look like a modern cityscape beyond. 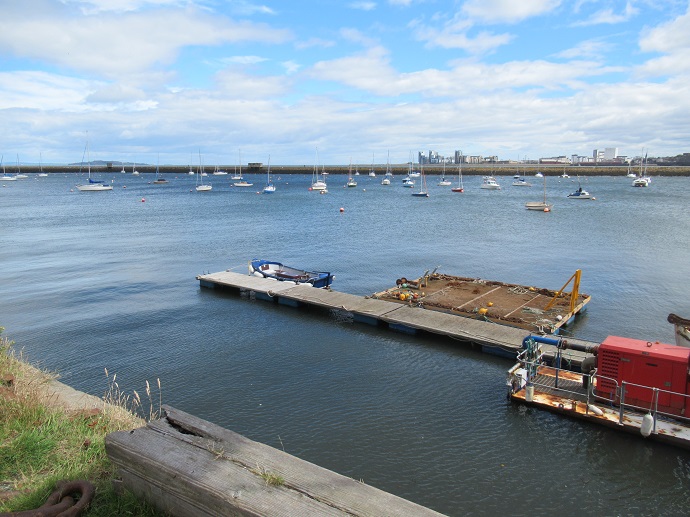 On the other side of the yacht club buildings, behind some waste ground, are the remnants of a far more battered looking harbour. 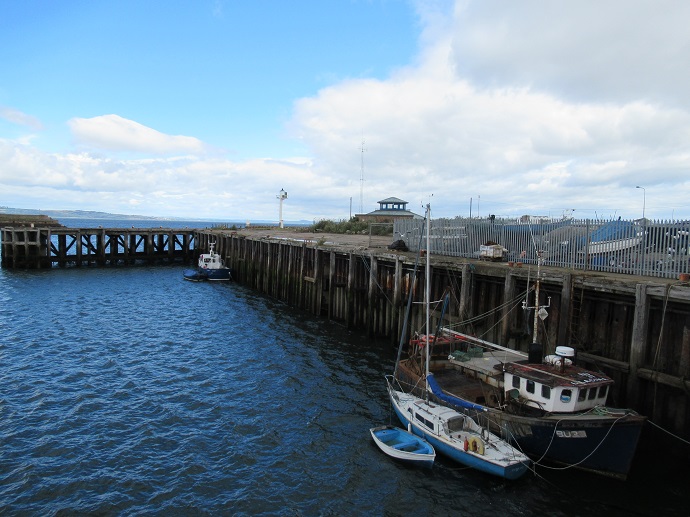 Building works have closed off most of the eastern side of the little pensinsula, where more new flats are going up (built behind a kind of pool of water, in case the sea isn't enough), and I had to turn right back up to the little lighthouse before I could go on along West Harbour Road.

Beyond the new buildings on the old harbour was a stretch of plain industrial road, the first landmark of interest being what were obviously gates of the 17th century Caroline Park, now blocked off. 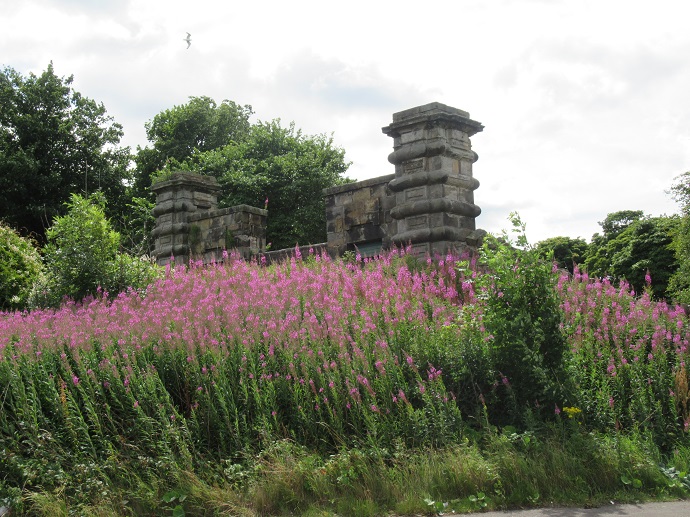 On the other side of the road at much the same point a path turned off behind the buildings to give access to the seafront again. 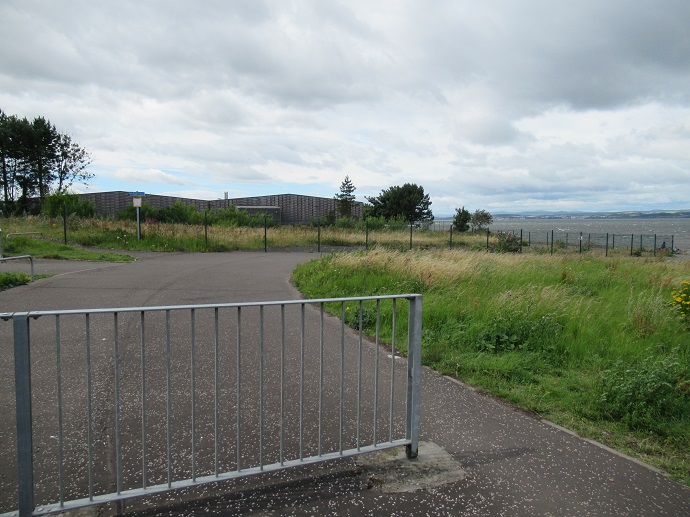 This was the start of the long stretch of promenade, but as it's still running out towards Granton point the bridges are in view, which they aren't really once the coast turns in towards Silverknowes. 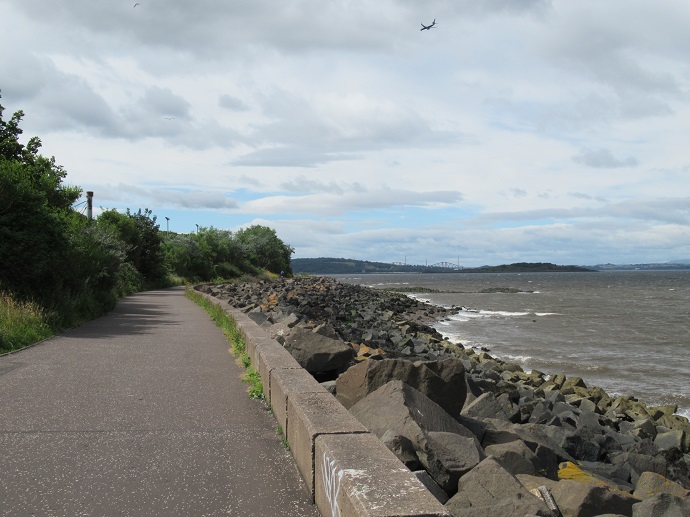 Granton's main landmark isn't particularly in view from nearby - I only really turned by accident at a point where it could be seen through the fence. 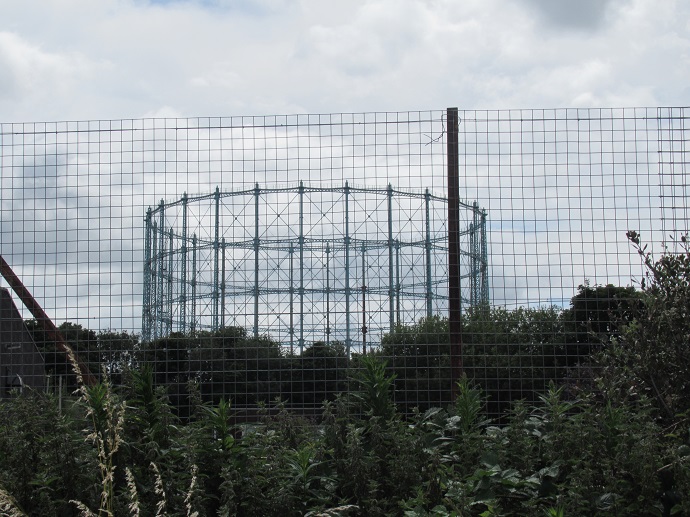 Sometimes the seawall was decorated with little brass rubbing plaques showing local scenes, but I wasn't really sure whether this was art or not, although I liked it. 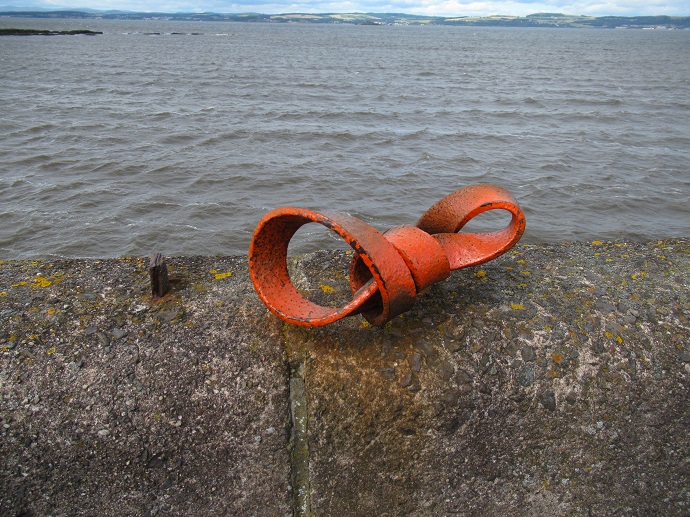 I had never really taken in just how much Edinburgh - as opposed to Leith - turns its back on the sea, or just how suddenly the land rises from the coast, although I know how deep the river is in its valley heading down to Cramond. But once the Granton warehouses were left behind there was nothing in sight except an occasional 'big house' on the hill, first a fairly standard one, and then one a bit like a church tower looking through the trees. 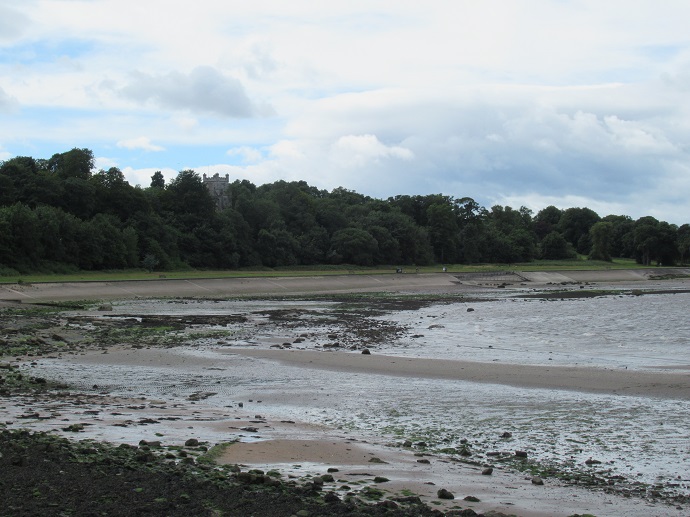 Tower in the trees

At the little bay here the path along the front met another one coming from a kind of park, and it got a bit busier. A scattering of trees beside the path at the corner were very pretty, and looked like they might have once belonged to the grounds of another big house, this one just at the top of a more gentle slope. 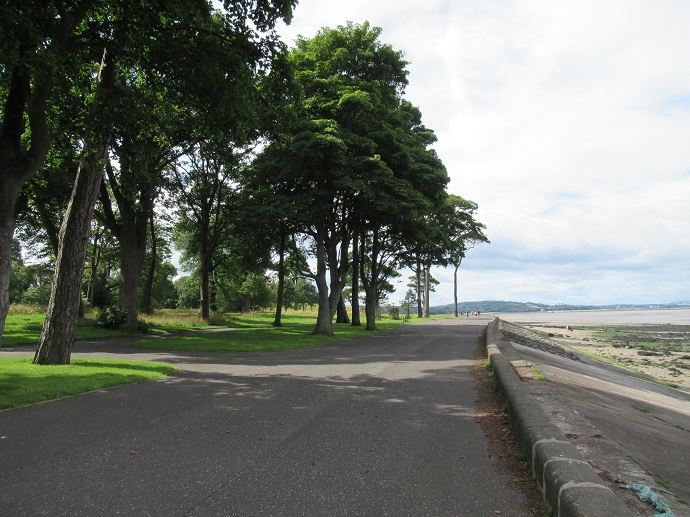 Trees by the path

Round the corner the view was a bit more like the view from above you get from Lauriston House - looking out obliquely to Cramond Island. 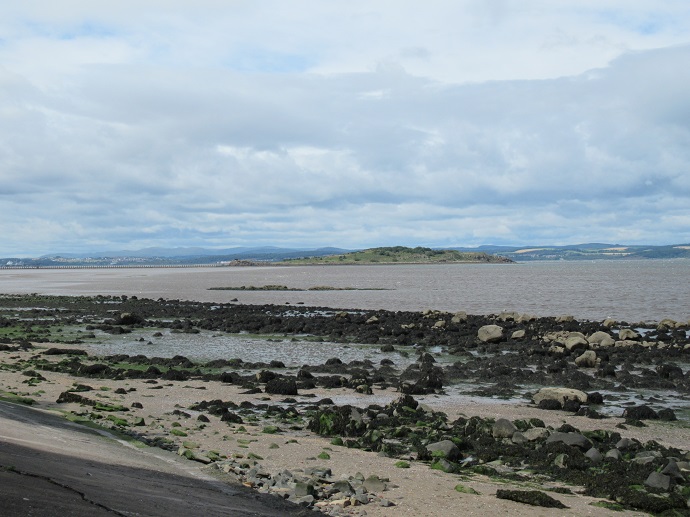 This was definitely the more popular part of the coast - you can park at Silverknowes, and there's a kind of takeaway cafe there. As the coast turned in towards the mouth of the Almond there was more and more sand in sight, and less water - the sands stretch out a long way from Cramond at low tide. 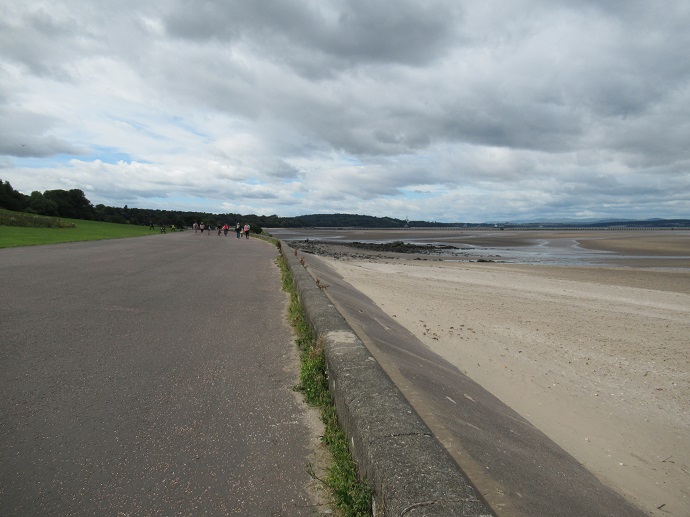 Cramond Island had been closed off ever since some idiots got themselves stranded early in lockdown, but I had noticed further along the promenade that they had put the new tide tables up, and although the barriers were still there when I came to the circle they were now just a zigzag way through with warnings, presumably to make you think twice.

It's a long long time since I was over on the island - I always seem to go to Cramond on a whim, so I don't check the tides beforehand, and I'm never usually lucky, but this time I had about an hour to go before low tide 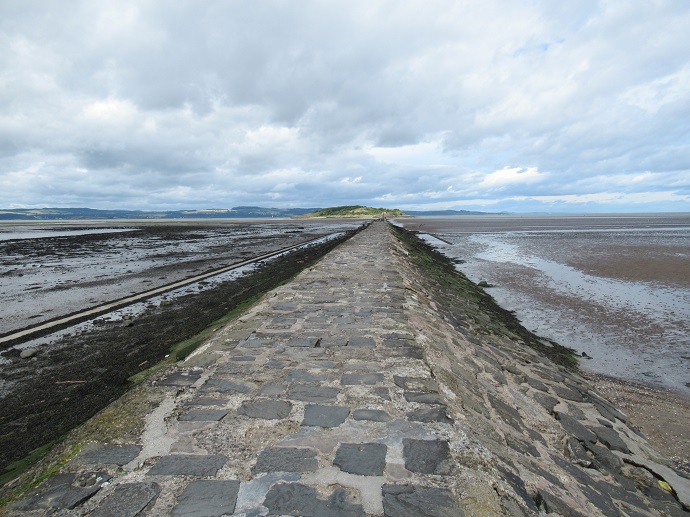 It's quite a long walk out, with the odd triangles beside you, and it was fairly busy - people starting to come back, too. Once on the island, however, most of the people seemed to vanish - there were quite a few around the rocks at the end of the causeway, but by the time I'd followed a little path to the summit of the island I'd left most of them behind. 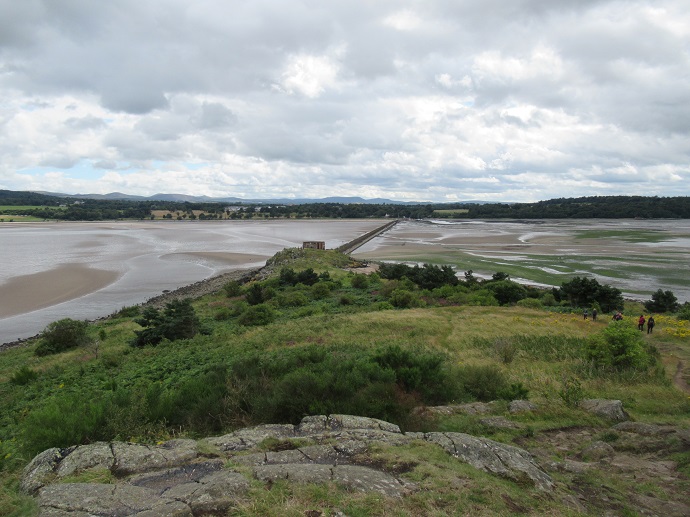 There were places where looking across at the mainland gave me an odd feeling, as if it was the island - something like Mull, with its hills rising behind.

To the west I had the view of the bridges which is hidden from Cramond itself. 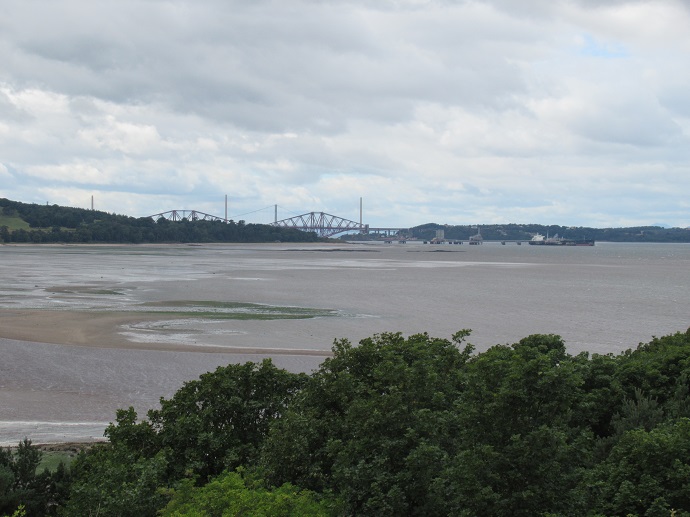 Along to the bridges

A little path wound its way to the back of the island, with all its odd concrete huts. From here you see that Cramond is really just the first of a little string of islands, with more odd war buildings on Inchmickery, and the little Oxcars light. 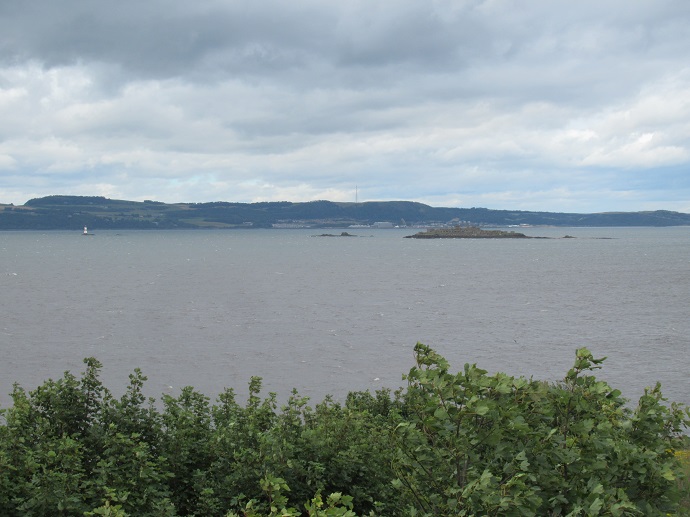 I made my way back round the edge of the island, with its beach and battered stone jetty, and back to the mainland more on the sand than the causeway.

Cramond village is pretty, and full of interesting buildings, but I forgot about taking photos of any of them, and just passed on through - I did take a picture looking across the mouth of the river, but then hurried on up it. 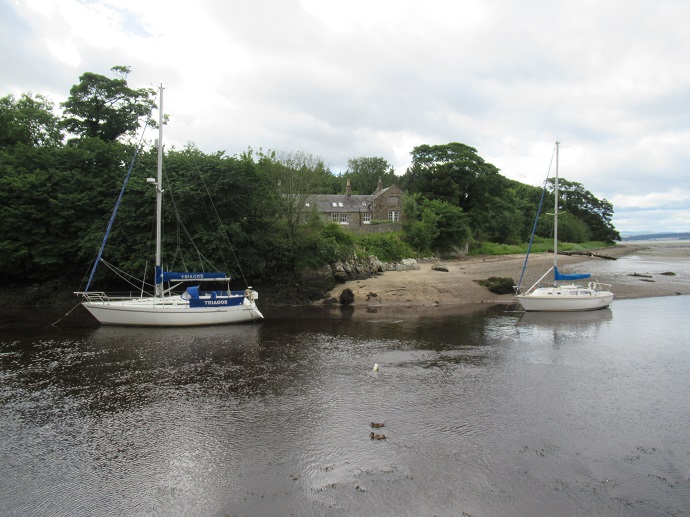 Over the river mouth

The Almond isn't exactly the coast, although it's tidal up to the weir, but it does a good job of blocking the route along it, as the first crossing is the 17th century Old Bridge, more than a mile upstream.

The main landmark on the river path is the ruins of the old Fair-a-Far mill, with its weir - originally a corn mill, but later an 18th century iron works, in the days when plenty of water power was the most important thing that manufacturing could have. 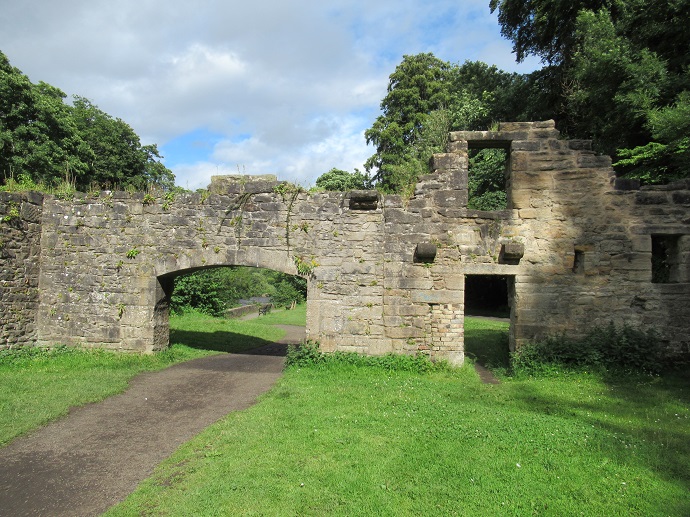 I've seen the water of the Almond turn odd shades of brown before - it's a river that seems to bring down a lot of mud with it - but at the weir it was doing a very odd trick, glowing genuinely red in the sunlight. 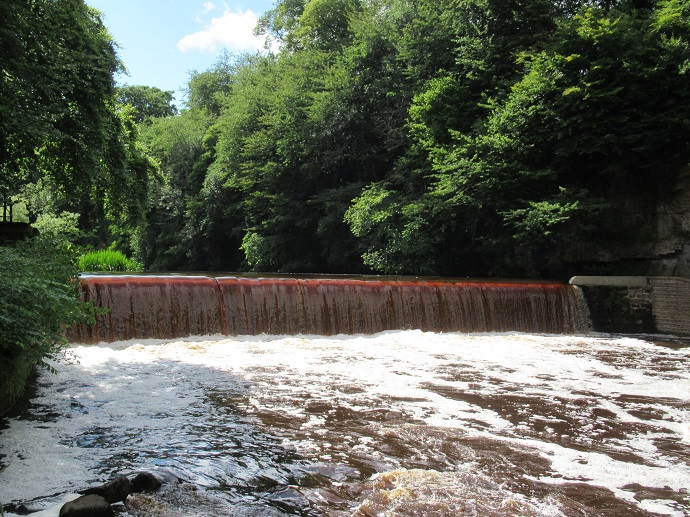 I crossed Cramond Bridge the last time, when I was going on down the other side, so this time I left it behind and headed up towards Cammo and home. 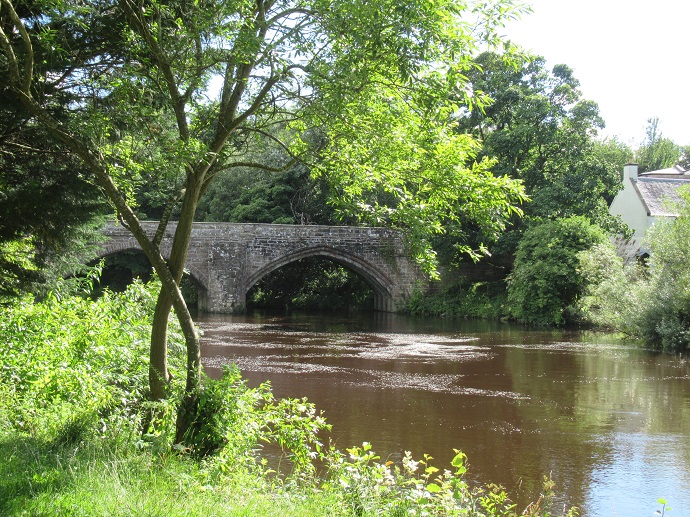