First ever report following my first solo Munro. My normal Munro buddy was back working after Lockdown so it was left to me with little work on to venture out alone. It was a period of high humidity and thunderstorms so I studied the forecasts closely and decided that the ‘Glorious 12th’ was to be my day. It coincided with the second anniversary of my Dad’s passing with dementia so it was actually a good day to be totally alone with my thoughts.

Everything was ready, sandwiches in the fridge, bag packed, bike in the car but when I woke at 5.30 the missus said she didn’t want me to go, did I hear the overnight rain and thunder. I had heard nothing! I looked out, pea-souper, plans in tatters. Hummed and hay’ed over breakfast, re-read the forecast and it was clearing at daybreak apparently. England and Wales still getting more thunderstorms, not my concern! 😂🤔

I convinced the missus it was safe and finally left Dundee at 6.30. By 6.40 I was on my way home again as the extended breakfast had upset my routine and I had forgotten to install my contact lenses. Map reading would be a challenge without them. I carry spare readers in the bag but they are such a faff! Sorted and on my way again by 6.45. At Pitlochry, it was fair, but very low cloud still hung over northern Perthshire.

Arrived at the well signed car park at East Lodge which I knew from previous outings, got the mountain bike ready and headed off about 8.30. As described in other reports I turned right out of the car park and went through the gates on the right of the lodge. From there I followed the yellow way marked posts on a good track keeping the river Tilt on my right. Even without seeing the river I could hear it clearly given the amount of water thundering down after the overnight rain. I crossed over the river to the east side at Cumhann-leum Bridge and continued north. The track was a great surface for my bike and hybrid bikes would easily cope too. It was mostly either flat or uphill with the occasional downhill stretch which dismayed 😩 me greatly as it dawned on me that they would be uphill when I was knackered. Ce la vie I thought as by this time the sun was out and the forecasting on every site I read was spot on - no more thunder.

The important check points for me were to be Marble Lodge first and then Forest Lodge. I reached Marble Lodge at about 4.8 miles from the start. 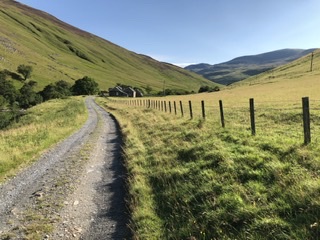 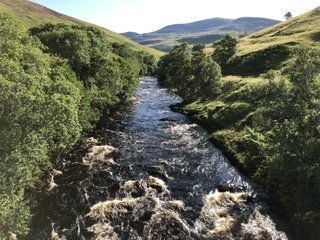 to cross the river once again to continue north up the west side once more. By this time I was expecting to have seen estate vehicles moving about on the track due to the start of the Grouse season but nothing so far. This sign reminded me of my responsibilities to stick to the route I was intending to take. 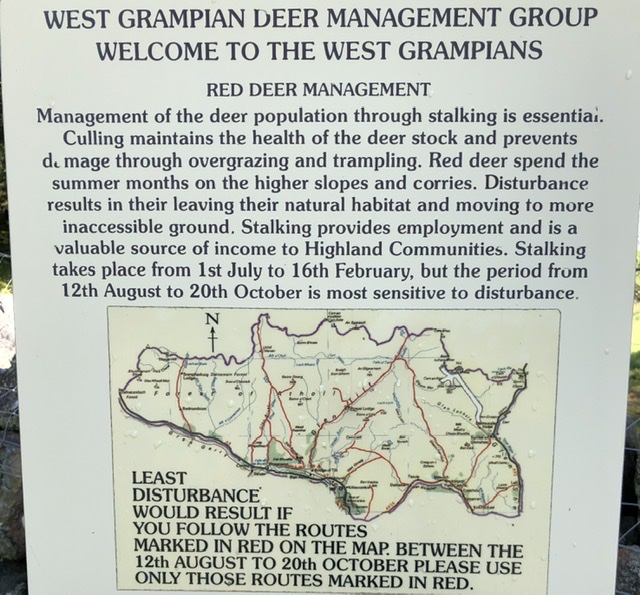 After just over an hour I arrived at Forest Lodge and navigated through 2 gates on the drive at the south and north ends of the lodge’s extensive ‘garden’ area. 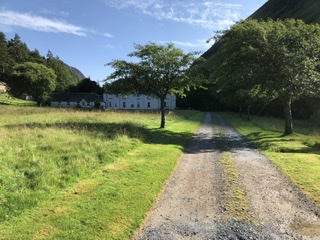 The second gate area is where I secured my bike to a tree and on checking the map found that I should turn immediately left through the gate. I decided to try and take a few photos of the thundering water in the Tilt but got beaten back by midge and an unwillingness to fall into the river while trying to get the best viewpoint. 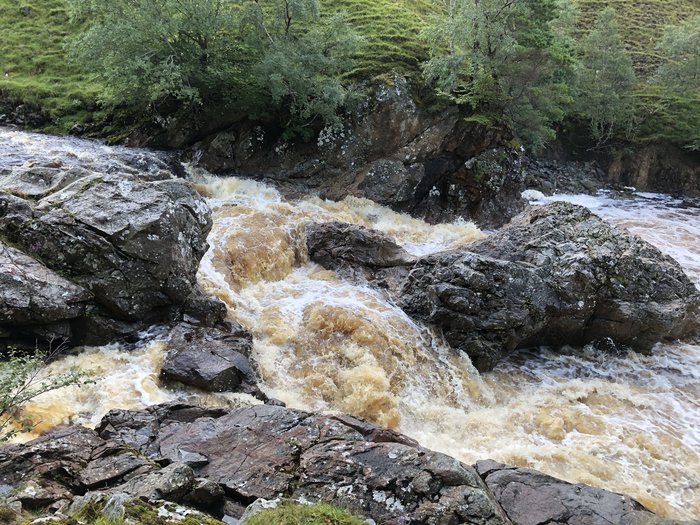 So, 7.5 miles done on the bike and the humidity was intense. Having gone through the big gate, turn left and very quickly find another small gate and immediately turn left when through this. Follow the line of the trees westwards until you come to a fence, head uphill and find a stile which you should cross. 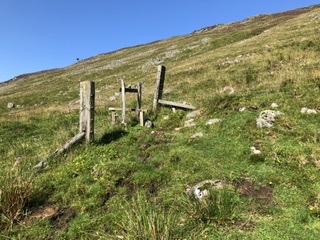 The rough stalkers path zig zags up the hillside and its steep so be grateful for the zig zags. By this time I was pretty hot and the sweat was pouring off me. Everyday is a school day they say and I soon learnt a valuable lesson - do NOT put midge repellant on forehead if liable to sweat. Very soon my eyes were stinging so badly it was rucksack off, relieve the pain with water from many over-flowing burns. I then lost a contact lens but remarkably i found it in the heather, and managed to re-insert! I did stop several times thereafter to wipe my brow and let my heart, lungs and legs rest. Did I mention it was roasting!

It was good to see Forest Lodge disappearing as I made progress uphill. 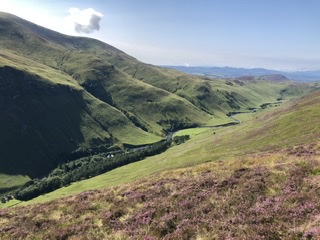 I soon reached the end of zig zags and on checking the map found that the contours were pleasantly wide apart from now on to the summit which appeared in view along with a couple of cairns to keep me on track. 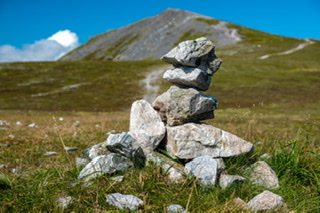 The scree on the west side checked out with the map so I now knew where I was heading. It was a pleasant walk on slightly boggy ground followed by short walk over the scree to the cairn at the summit. The 360 views were outstanding across Perthshire and beyond.

The panorama is taken looking over towards Beinn a‘Ghlo

Given the heat and tired legs it was a 2 hour hike to the summit but so worth it for the scenery. I even had the luxury of leaving my pack at the bottom of the final ascent and that was liberating in the extreme in the conditions. I set off to return by the same route. An important point to note that others have also highlighted is that if you want to collect your bike from where you left it without a 3 mile walk at the end then make sure at the first cairn on the return at NN920756 that you stick to the more faint path on the left and not the double track on the right. That takes you down the route WH describes for walking all the way!

On my approach to Forest Lodge to collect the bike I stopped for a bite of lunch and took the camera out in case another jet flew down the glen as it had earlier and I missed it. Lunch scoffed, no impending arrivals of the Air Force so the camera went back in the bag which went back on my shoulder. You will have guessed where this story is going by now!! I heard a loud rumble and then a Hercules (I think) meandered south in the glen. Panic stations - pack off, camera out, switched on, lens cap off, sun glasses and hat thrown to the floor and I just managed a photo as it headed south. They really should give more warning! 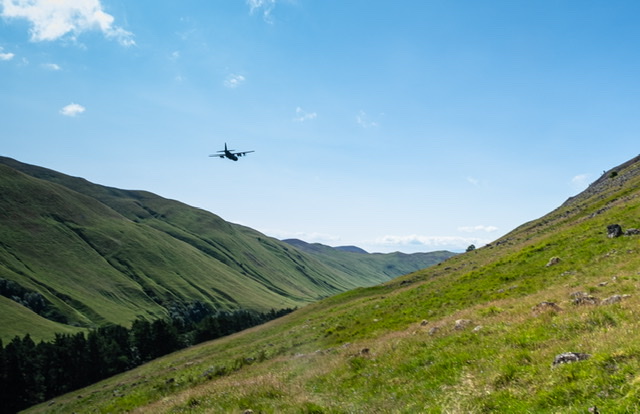 I missed a great opportunity for one of the reasons I sometimes carry a decent camera rather than relying on the phone but hey ho, I’ll be back some day. Back on the bike and it was a pleasant run back down the glen with only slight inclines to tackle. The weather made this a fantastic day which totalled about 5.5 hours but could be done slightly quicker if no stops were made. I had considered doing Beinn Dearg as well but I was too hot and bothered by that time.

A beer and fresh water at the Atholl Arms beer garden was well earned. 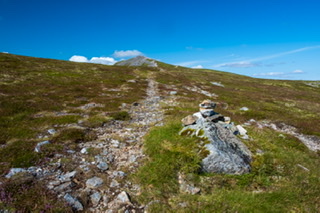 Great first post with fab pictures! I do like Glen Tilt, there is so much to see, including jets! I never got the views from Carn a' Chlamain, so I guess I need to return some day.
Looking forward to reading more trip reports from you.