I’ve finally trodden new ground – and started to reacquaint myself with what was once familiar.

For the first time since September 2019, and two years to the day since scrambling to Am Basteir to compleat my Munros, I explored new territory. Turning left at Bridge of Balgie, into the upper reaches of Glen Lyon, was a new experience.

The concrete brutalism of 1950s hydro-electric architecture wasn’t the most appealing feature at the head of Glen Lyon – I prefer the texture of gritstone or granite block-upon-block and the way it weathers. The grey tones of the Lubreoch Dam melded with the clouds above, standing between me and the two supposedly remote and innocuous Corbetts separating Glen Lyon and Gleann Daimh: Meall Buidhe and Sron a Choire Chnapanaich.

The early start wasn’t without pain, but a pre-packed bag minimised swithering and dithering as things were in the right pouch or pocket. A fortnight earlier I’d faffed and fumbled, even forgetting to lock the car before securing keys and wallet deep in my bag. Then, halfway out of the car park I realised a walking pole remained stuck in the ground, as if it had been paid a shilling to look after the car while I was gone.

I can only hope that routine will return.

Gloom pervaded the glen, threatening to upset the optimistic forecast. Fortunately, anxiety over parking had been dispelled on arrival at the little hamlet of Pubil: this was no honey-pot destination where the local council felt restrictions to be in order. I was grateful for small mercies and pulled in alongside a lone Land Rover by the bridge.

In still air, that could be hooching with midges in a few weeks’ time, clambering up to the nowhere-near-the-lochside path beyond the dam loosened the legs. But, once a stone wall was passed, the more daunting prospect had to be faced: that slope to my right wasn’t going to climb itself. Featureless, other than scratches masquerading as fledgling ravines, it was a case of rhythm, plod, rhythm, plod, breathe and repeat – for an hour. Behind this lump was a bealach – 709m – so I tried not to go too high before contouring round: there’s no point in wasting effort. 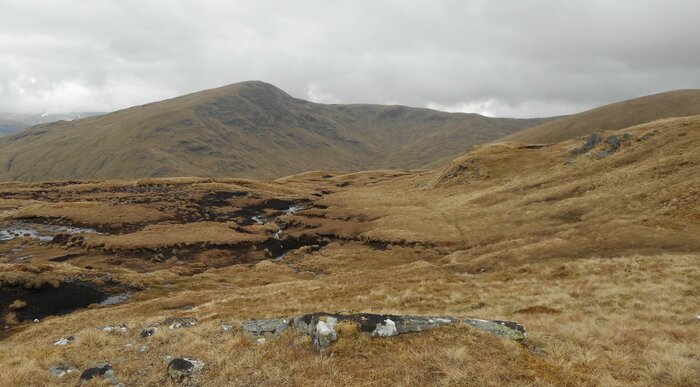 At times there was a vague track, made by sheep, deer, or humans, who knows? The hour was mostly spent tracing the easiest ground before the corner was finally turned. A smooth saddle hove into view and I spooked a herd of deer. Twenty or thirty bolted off in all directions, then stopped, looking back with disdain as if to say, “is that all it was?” before bending to continue their disrupted graze.

From the incongruous gate at the bealach, Meall Buidhe swept up and to the left. It was back to plod-mode, but not as strenuous, before the promised view across Rannoch Moor was revealed. Across the almost Lakeland landscape striding out came as a relief. 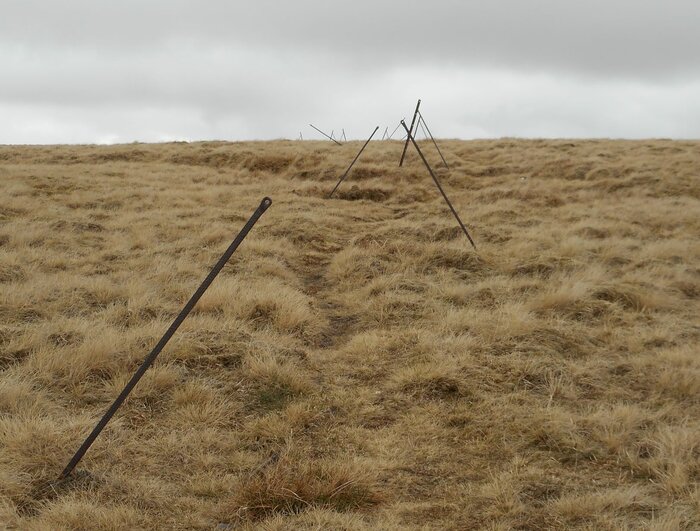 Meall Buidhe’s summit, at 910m, boasts a pole, a loose assortment of stones that may once have been a cairn, and another smaller pile of stones. None were near one another and none appeared eager to claim the highest status. Above, threatening black-bottomed clouds hung listlessly, dangling wisps, as if they had nowhere to go and couldn’t summon up energy to even rain. The atmosphere exuded apathy. With only four metres to go, the only excitement arose from wondering if I threw my GPS far enough up in the air it would register as a Munro. But then I wondered if I could catch it again. I wasn’t minded finding out or lingering; another objective beckoned. North to the Glencoe and Ben Nevis hills from Meall Buidhe

Back at the bealach I unsuccessfully scanned the hillside for the herd of deer before heading north east down the Feich Thalain, crossing to its true right bank when it narrowed and its sides steepened. A further spell of contouring round and I was looking down on a less-than-enticing bealach blanketed in peat hags, to be crossed before the slopes of SaCC could be tackled. Back at the gate - looking down to Sron a Choire Chnapanaich Given the slightly damp May we have experienced, it wasn’t as bad as it could have been. Black mesas and buttes in a peaty Monument Valley

I’d like to have written that, once back in rhythm-and-plod mode, SaCC was dismissed in a flash, a stroll, a wander, a 220metre breeze. Instead, I felt the first pangs of cramp as I saw a shoogly pole sticking out of an underwhelming cairn, and regretted not bringing (no, let’s be truthful, I forgot) my seat mat. Manipulating jacket and bag, I did a dry slump, closed my eyes and obviously fell asleep. I must be of an age when the afternoon nap is obligatory, or it’s an unhealthy habit cultivated over the last year following lingering lunches. Vaguely aware of deciding between a gargling grouse and the gurgling of my stomach, I woke. 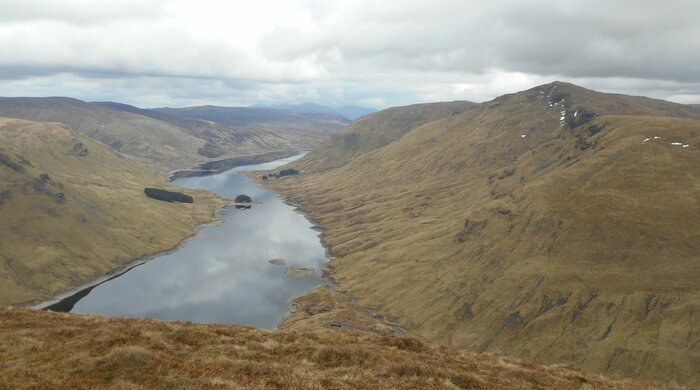 While the two summits (and I use the term loosely) competed in a game that neither seemed to want to win, the reality of the situation sank in. This was more about setting than stature. In one direction, a serrated skyline stretched from Creise and Meall a Bhuiridh to Ben Alder and Beinn Bheoil, with Rannoch Moor stretching out in the foreground. Insignificant lumps in the distance could be pin-pointed that had cost a day of effort and occasionally pain. A pack of re-introduced wolves could be roaming from lochan to lochan. Behind loomed Beinn Heasgarnich and Creag Mhor, their post-winter fringes threadbare and worn. Overturning the perspective, it must be boring on all those big things with just these rounded humps to see.

But time wore on. I’d reactivated the Corbett clicker and two more could be marked off when I got home. It was time to leave.

Striding south down an easy gradient, across yet more pathless ground, I recalled the anxiety of someone I once walked with who’d only ever visited Munros –honey-pot ones at that. On their first Corbett excursion they felt uncomfortable not being on a clear path or track. Yet, as I felt the gentle squish and give of the ground rather than squelch and gloop of an absolute bog-fest, I was reminded that this was what it was all about – what it had been for so long.

Lower down, on the Bealach a Mhaim, spring was struggling to show. Shoots were emerging from the bleached grasses and, as a solar follow-spot illuminated trees then crags across the glen, there was a hint of that lime-green hue of growth. Sun and shadows played across the crags below Meall Ghaordaidh, now seen in a completely different light from the dull slog it presents from the south that most are familiar with.

Back at Pubil the final challenge was more prosaic. 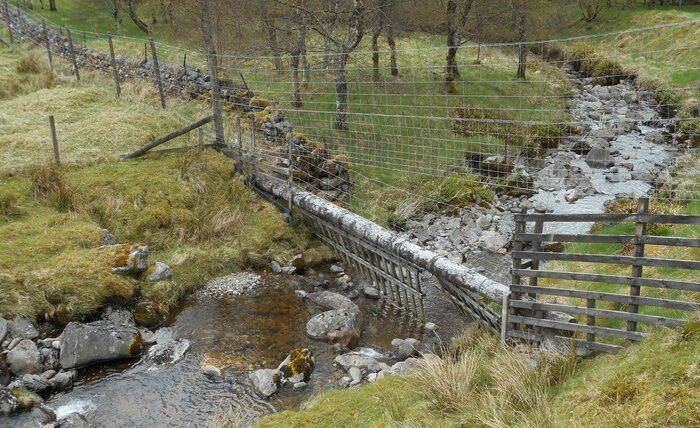 ... with a more interesting alternative

At the car, it was time to watch more of spring’s arrival. A pair of what I think were lapwings swooped back and forth across the road while twin lambs explored the roadside, one nervously clinging to its mother, the other more adventurous and exploring the roadside ditches, and then the effect of gravity – what a shame, it started off so white!

More lambs, put out to grass in the last day or so, provided additional entertainment on the drive out of Glen Lyon. Their ears were still pink and their fleeces immaculate. Completely unaware of danger, some sat in the middle of the road staring and vaguely curious while others waited on the verge until the very last moment, choosing the most perilous option and dashing in front of the car to mum. I’m sure they were just slowing me down so I could enjoy the views.

At the end of a brightening spring day in Glen Lyon

And so the day finished, appetite re-whetted and safe in the knowledge that rediscovering things can be just as satisfying.

Re: Setting over Stature: Meall Buidhe and Sron a Choire Chn

Nigel, you are a poet, sir! "The atmosphere exuded apathy" must be one of the great lines from any TR ever! Seriously though, the title hits the nail on the head. Even I could appreciate this when I did this pair with Kev some years ago on a stinker of a January day. Your prose and your photos have reminded me that I must return soon and hopefully then I will be more blessed by the Weather Gods.