Covid had put a stop to the original plan for Jonny Mitchell to complete his Munros in 2020 and this weekend had been on the calendar for some time now. Thankfully, with restrictions all but gone, the crew got the chance to join the Mitchell clan on Ben More for a fab day. (we were now on the 3rd bottle of whisky we had bought JM as a compleation present,,,,we drank the others!)

We left Glasgow to head for the 12:25 ferry from Oban to Craignure, traffic on the way kept us under 40mph for much of the route and we reached the terminal with the ferry still in situ, but, we had missed check-in and couldn't get on. ( I didn't even know there was a check-in hahaha.) Anyway,,1st on the standby list for the next ferry at 14:15. That went well, everyone turned up and we didn't get on that one either!

How did Calmac let us know??? "Please move your car" Anyway, debating it was futile, boat sailed, we moved to another lane and waited in hope for the 15:55 sailing. (we had been told some cars booked on this had actually gone on earlier ferries so hopeful of a spot.) To burn off some of my raging fury, I stormed round to Tesco for chocolate and beer!!!! my storming then antagonised a calf injury that Id got under control after some strenuous dancing at a wedding last weekend, deep freeze and deep heat added to the beer and chocolate shopping . Wandered back to the car in the drizzly rain, feeling a bit pants

Anyway,,there is a hill at the end of this story lol so here goes.

The Criagnure Bunkhouse is a lovely location, couple of hundred yards from the ferry terminal and next door to the pub whats not to like?
The commandant, sorry, owner checked people in, allocated rooms and proceeded to tell us how to use the shower knob as "it costs £250 to replace and people just don't know how to use a shower" Confident of our showering abilities, off we went. Rooms were what you would expect, bunks, clean, good allocations of sockets/usb and reading lights on every bed. All rooms are en suite also. The bunkhouse had stipulated that anyone not staying in the bunkhouse couldn't come in, so no communal mixing for those of the group camping and in vans across at the campsite. This certainly led to more time in the pub than would possibly normally have happened, but the cooler evening and midgies soon had the residents move indoors lol

Everyone was up and mingling relatively early on Saturday and cars filled up for the drive round to the starting point at Dhiseig. 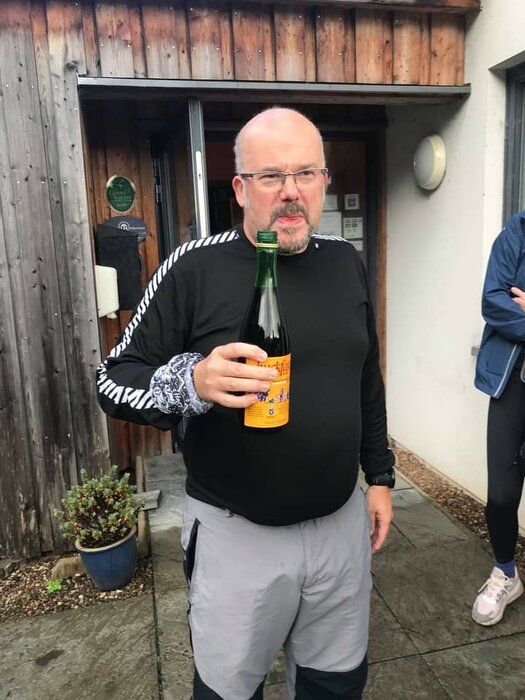 Crowd ready for the off

We eventually started walking around 9:45, not much later than the original plan. 30-40 people all heading off towards the hill, which came in and out of low cloud but with the forecast to clear up by 1pm. The views west to the Creag Brimishgan terraced cliffs to the west were spectacular and the amphitheatre of Gleann Doire Dhubhaig behind shows more subtle terracing of possibly volcanic origin. 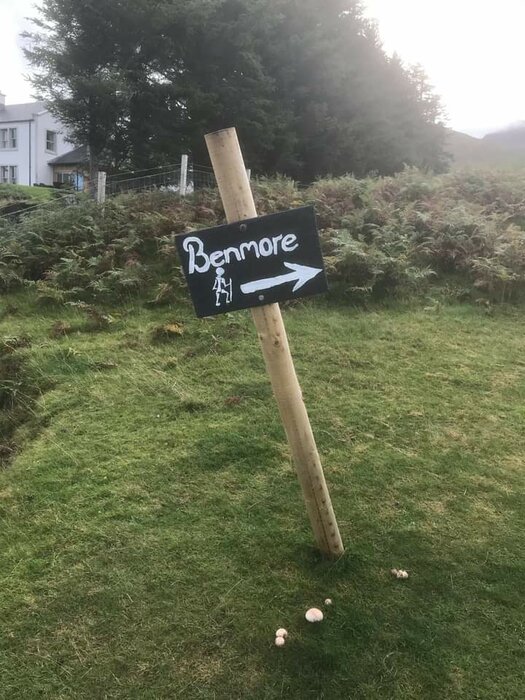 For anyone who's done Ben More, you will know this is a good path from bottom to top. Grassy lower slopes lead up through bracken covered open land. Passed a lovely waterfall which someone was so territorial about, a wire fence line continues straight across the front of it lol. 2 small river crossings didn't cause anyone any issues as the water was pretty low but plenty of people and poles on hand to make sure everyone was over. A few dogs were in the group and they had a splashy time here too. 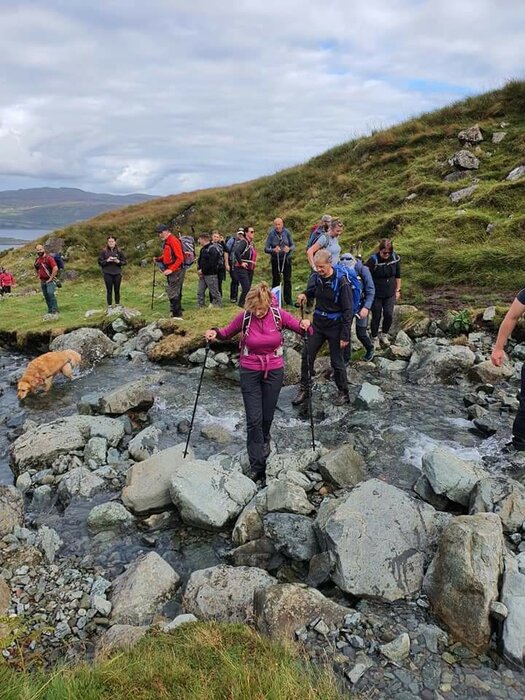 The route steepens over a section under An Gearna and the low cloud was still swirling in and out around and above us. 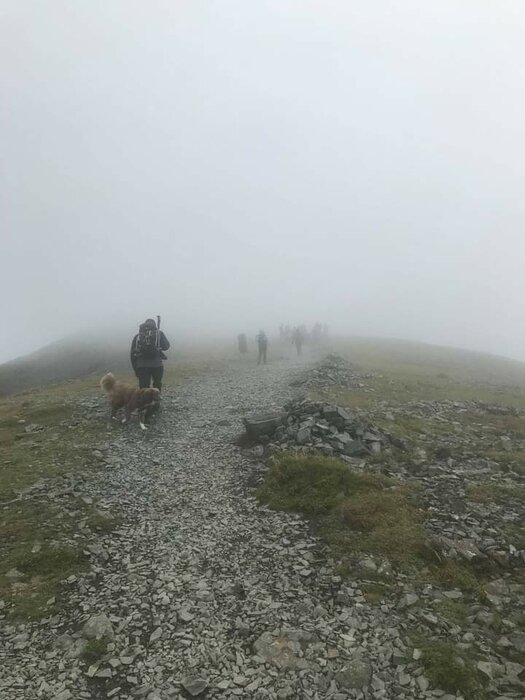 Up into the clouds

As some of us reached the rock strewn gravelly path up the zig zags, we had limited visibility ahead but held out some hope of a clear summit. It started to get quite breezy but I was holding out until the summit before stopping to layer up. The path moves south slightly, away from Coire nam Fuaran and becomes a longish plod up, so, we plodded up.

Gradually the gradient eases a bit and you get a bit of respite as you walk along the corry edge above Lag a Bhasdair. I had seen a sea eagle just here on my last visit but no such luck today.

There were a few people around who were not with our group as we approached the large low shelter cairn on the summit. With Jonny abiding by the tradition of arriving last to your last Munro, we had time to sit down, layer up, have some lunch and wait for the man of the moment to make his appearance. Lots of Jonnys non hill walking family and friends made the climb and enjoyed a wee rest too. The sun made a huge effort at this point and we were getting good views as the clouds skudded past.

A bit of chat with the other hill goers before Jonny appeared on the plateau. 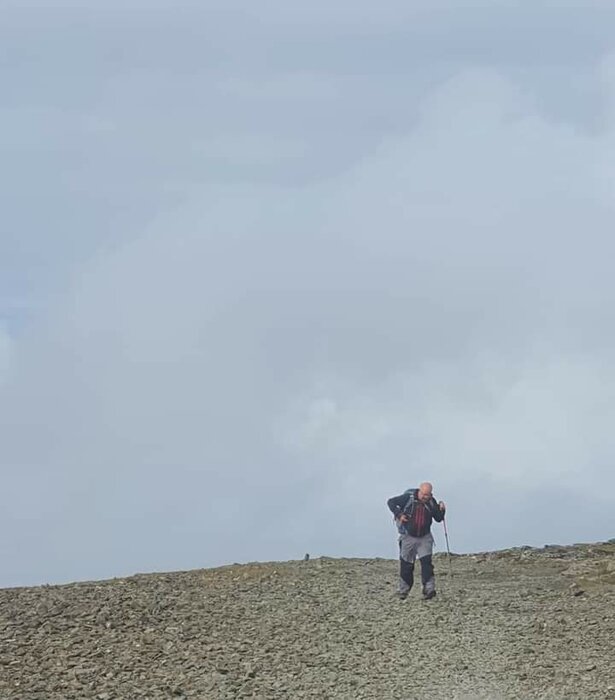 What's that coming over the hill?

A definite burst of sunshine as he approached our raised guard of honour with walking poles to lead him to his final summit. Well done that man! 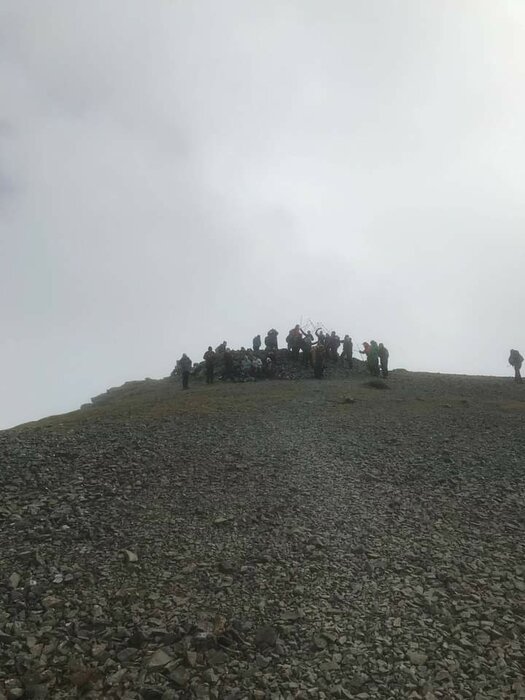 Jonnys eye view of the summit 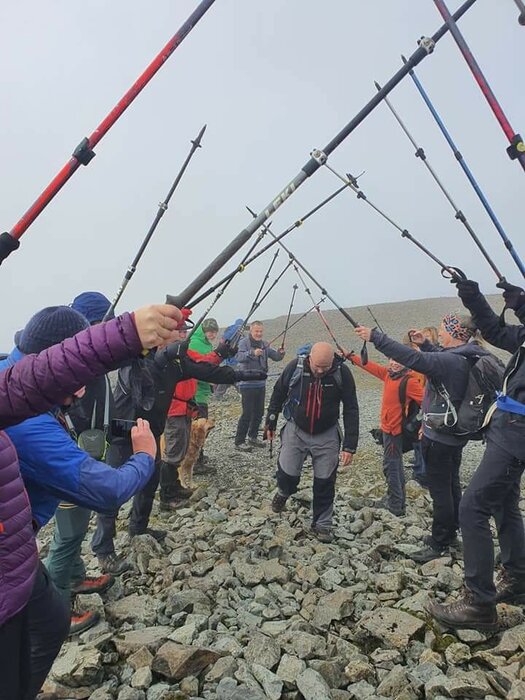 Making his way to the cairn 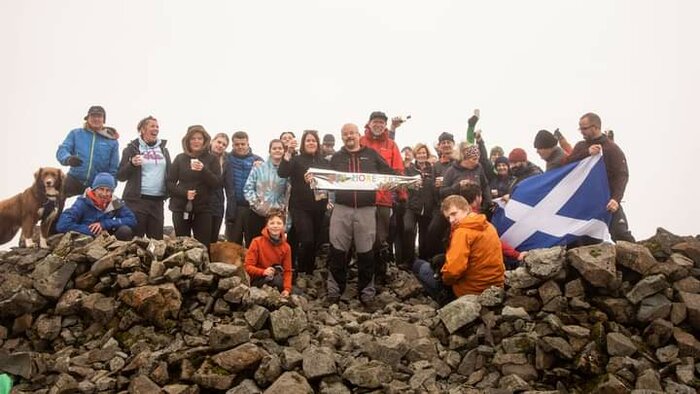 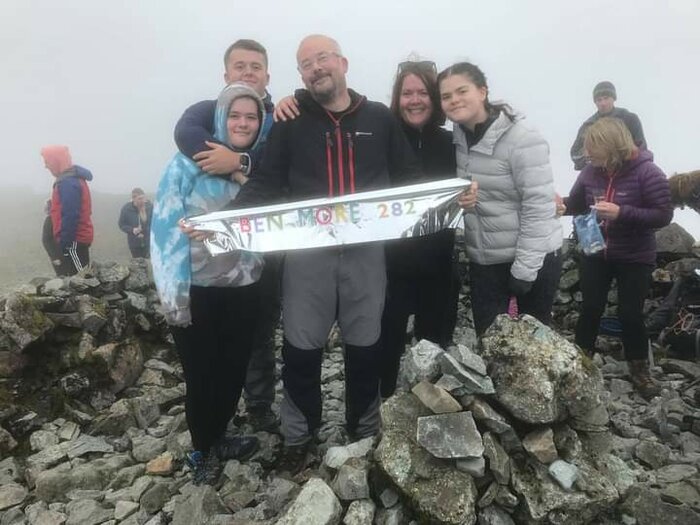 Time now for opening bottles of prosecco, passing round the malt, hip flasks, passion fruit sourz etc and generally getting very merry. Banners given, pics taken, we had a 200th Munro celebration too with Colin L and several Munro 1st timers. Lots of compleatists there too and happily our compleatist pic now included an extra one. 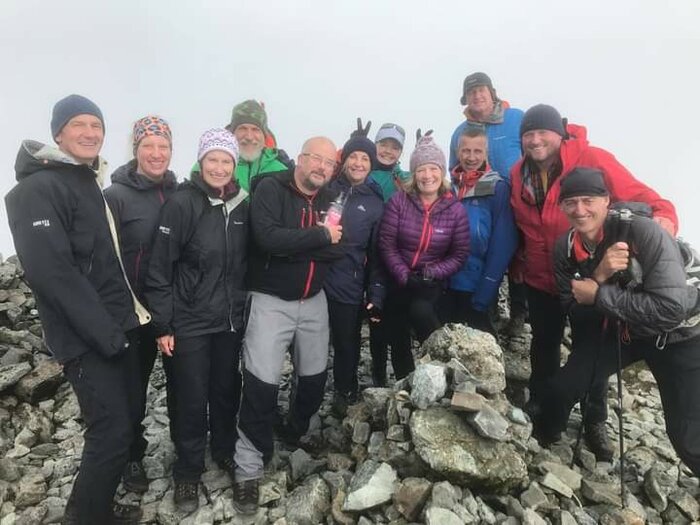 A new batch of compleat baggers 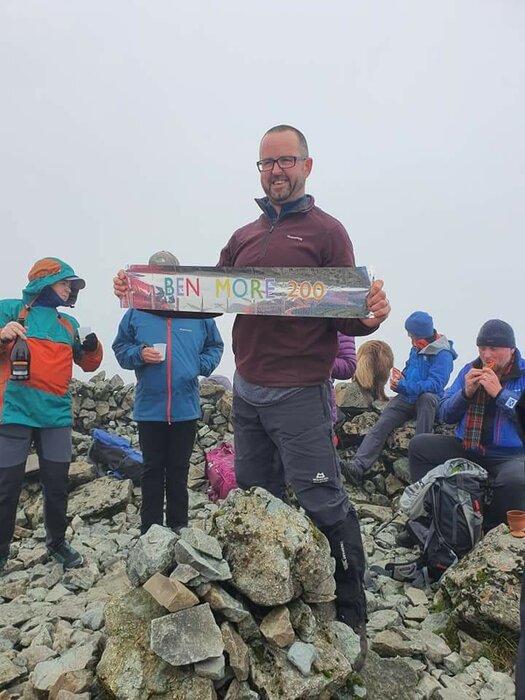 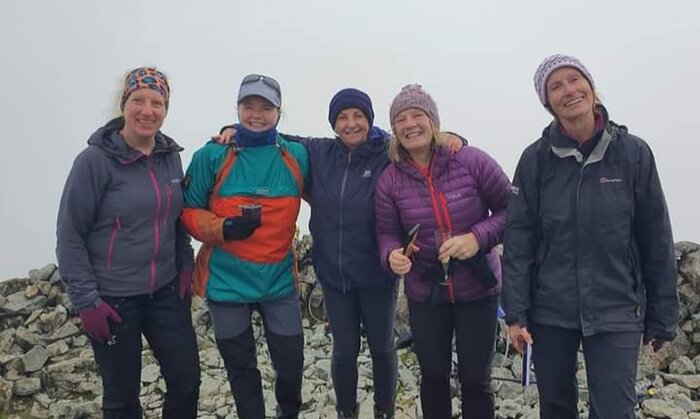 Prob spent almost an hour on the summit before we started heading off down to the cars at the beach.

Enjoying the views as we headed back down 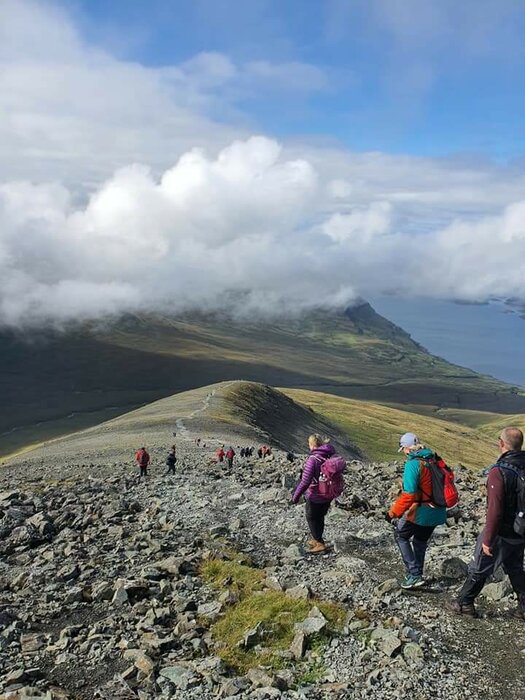 Spent some time here, sitting on the rocks, washing muddy boots in the sea and just chatting before heading back to Craignure. 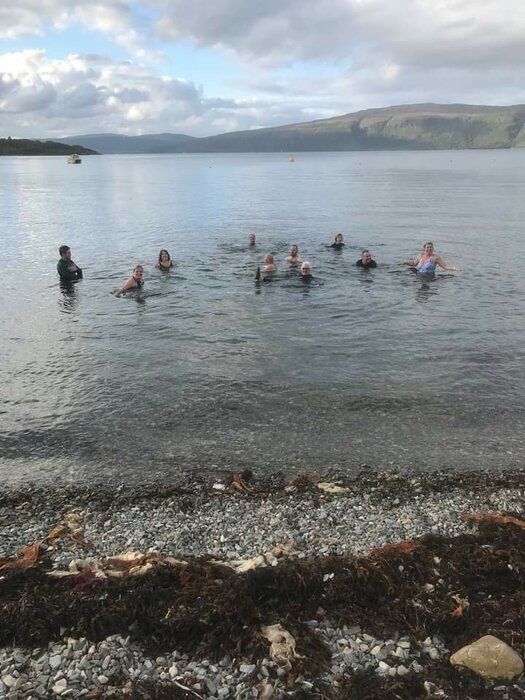 A post hill swim for some back at Craignure

In order to get us all together for a post hill get together, we were luckily able to meet up at a wee cottage over by the campsite where some of Jonnys family were staying, camp chairs on hand, used the wee back garden to its fullest, overlooking the sea as it got dark. Fab curry and desserts provided by the Mitchell mob before heading back to the bunkhouse. 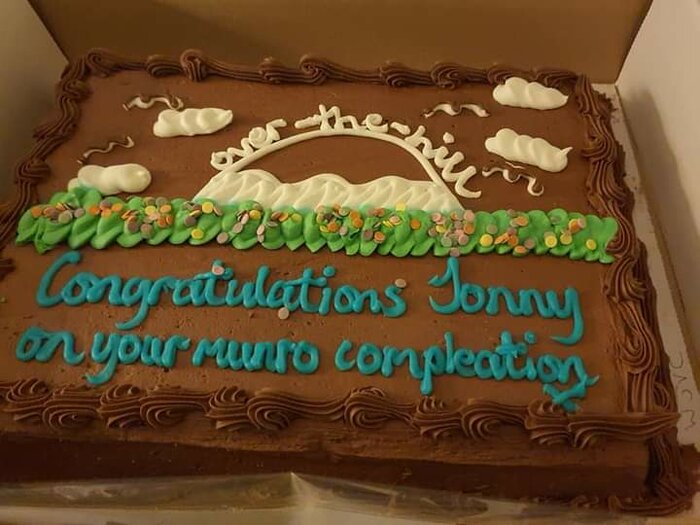 Well done to Jonny on his big day, it was a pleasure to be invited and to share the day with you and yours.

Thanks to JM and Theresa for some of the pics.

Thanks for doing this Gill. Great weekend.

No worries , hope it fills the remit

Excellent report Gill, and sums up the wonderful spirit of the weekend nicely.
A final tally on the weekend's whisky consumption would have been interesting, but one does have to support the local economy in these difficult times.

Huge congratulations my good friend, it's been my pleasure to accompany you on many of your adventures, I'm so glad you're big day finally arrived, I was bursting with pride with all the family around you at the summit.

No worries , hope it fills the remit

2manyYorkies wrote:Excellent report Gill, and sums up the wonderful spirit of the weekend nicely.
A final tally on the weekend's whisky consumption would have been interesting, but one does have to support the local economy in these difficult times.

Not sure about the total tally, but three bottles consumed on the hill!

gammy leg walker wrote:Huge congratulations my good friend, it's been my pleasure to accompany you on many of your adventures, I'm so glad you're big day finally arrived, I was bursting with pride with all the family around you at the summit.

Cheers, likewise many more adventures to come. It was emotional with the family there. I could feel your pride, not to mention if it wasn't for you I literally would not have been there!

2manyYorkies wrote:Excellent report Gill, and sums up the wonderful spirit of the weekend nicely.
A final tally on the weekend's whisky consumption would have been interesting, but one does have to support the local economy in these difficult times.

I bought a bottle on the way back from the hill.....it didn't see the morning lol

Such a wonderful and special day for Jonny, family and friends. Graced with near perfect conditions on the mountain and by the sea

Bod wrote:Such a wonderful and special day for Jonny, family and friends. Graced with near perfect conditions on the mountain and by the sea

Cheers Bod, it was a great day and night (coughs)

It was a wonderful weekend and memorable for so many reasons

Thank you Alison for feeding my boys...the Curry and I quote here was the "best"

Jonny, I do hope you will not give up on the Munros, or even Corbetts, Tops or Grahams, your company on the few we have walked together have kept Lady Tenor shareholders very happy! The Meanderers Meanders need to continue...not least until I finish anyway

It was so good to "finally" catch up with so many friends, it was a long time in coming...

Congratulations Jonny! It was exactly 10 years ago I met you with your daughter at the foot of Beinn Ime (her on her first Munro) and so much has happened since then, not least you climbing quite a lot of hills! It's lovely to see the photo of your family with you at your final summit. Well done them too!

It was a great weekend Graeme, and also the weekend that kept on giving, in s slightly different way!