Good day to tackle Fisherfield area from Poolewe.
I started MTB ride from Poolewe to Kernsary Lodge as usual... This was the 4th time of this route to the Lodge.
From the lodge, I continued MTB but heading south.
However, I passed through the start point of hill walking and had a downhill appx 50m, so I had to uphill to go back. Good view from the road, but I did not realize this was the point to finish my MTB riding. Now I started my hill walking. The path is very clear to follow, so I did not find any difficulty at the beginning.
The path became steeper gradually after met a river, and the triangle mountain shape impressed me. After reached a short flat section, I suddenly lost my way, so I decided to scramble up towards to the triangle peak The view to East while scrambling.

I thought I reached the top, but actually it was Spidean nan Clach and a group of Mountain goats was there to wait for me (?) ( Actually, there were 20-30 Mountain goats were there... )
They did not move when they saw me at the begining, but eventually, they walked away from my walk direction.

Now I finally realized where to conquer, and the view was great !!! The view from there was SUPERB !!! 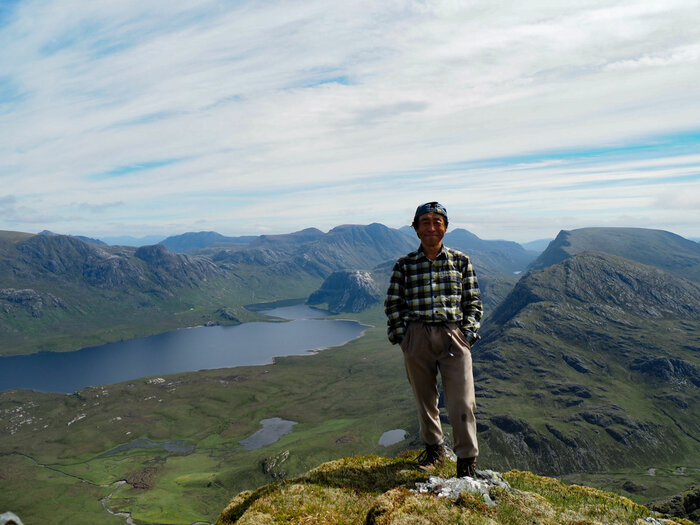 On my way to return was very simple and easy.
I just followed the faint path, and finally realized where I missed such a clear path.

I got another nice day to tackle to the remote and beautiful place !!!

You're right about the view from Bain Airigh Charr, The view from all the summits round Fionn Loch are brilliant, but this is my favourite (only ever been up A'Mhaighdean with fleeting views, so maybe that would win)

Sgurr wrote:You're right about the view from Bain Airigh Charr, The view from all the summits round Fionn Loch are brilliant, but this is my favourite (only ever been up A'Mhaighdean with fleeting views, so maybe that would win)

Thanks.
I also got a great day to see beautiful view from Beinn Liar last year... So, I was lucky to tackle those.

When I tried A'Mhaighdean, it was a nice weather but a little bit hazy. I have to do again.