Dalmally Munros – the long way round

Dalmally Munros – the long way round


Sometimes logistics conspire to ensure a spot of creativity is required on route planning. I was on the way home from a friend’s final Munro gathering on Mull, and on the train. Well, I would have been except Scotrail decided on strike action that day, and with my ferry being not until lunchtime, options were limited. With the forecast being reasonable, and the camping stuff in the backpack, I looked at the map and reckoned there was an interesting way to go round to Glen Noe and use the long north-west ridge of Beinn a’Chochuill as a camp site, with a view to going over the Munros the following day and back on the train from Loch Awe the following lunchtime. 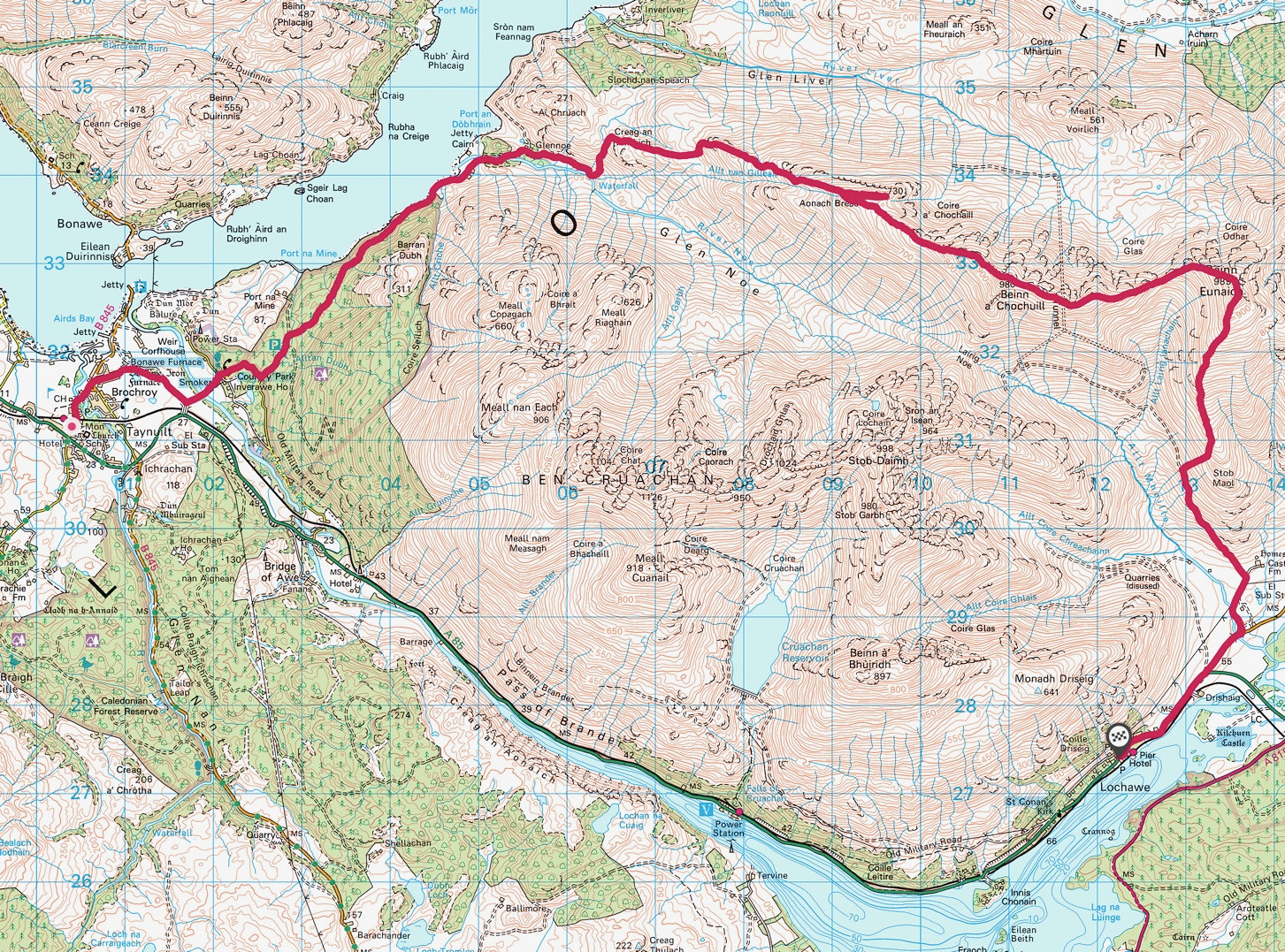 The legend that is Gammy Leg Walker kindly gave me a lift to Taynuilt, and I started from the station there, working my way through the village, across the wibbly footbridge to Inverawe, and into the forest for few kilometres, to take me down almost to the shores of Loch Etive. Wibbly bridge, River Awe and Iverawe House: 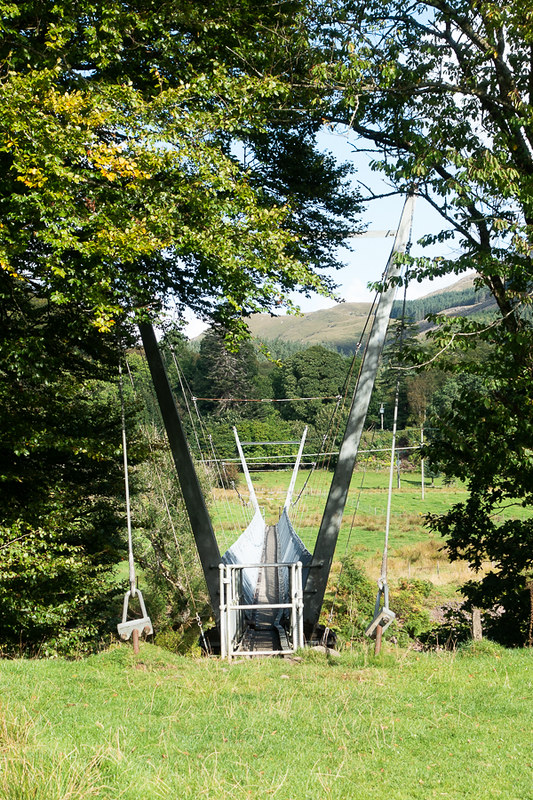 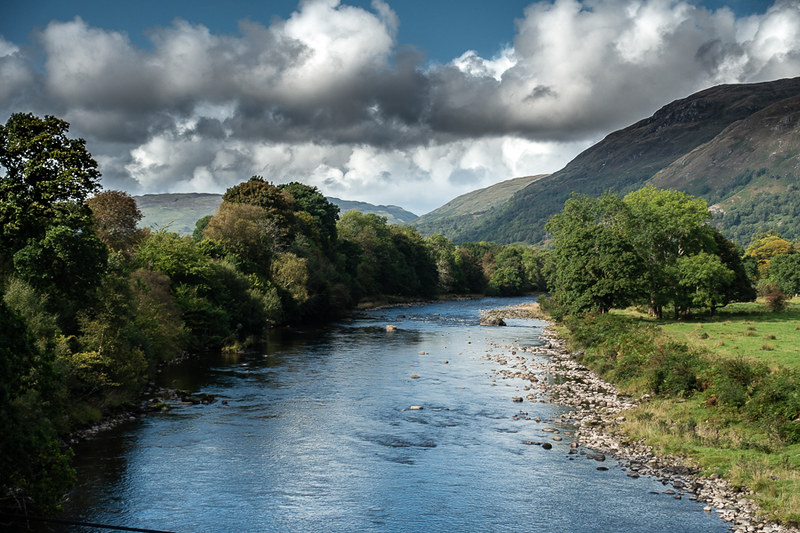 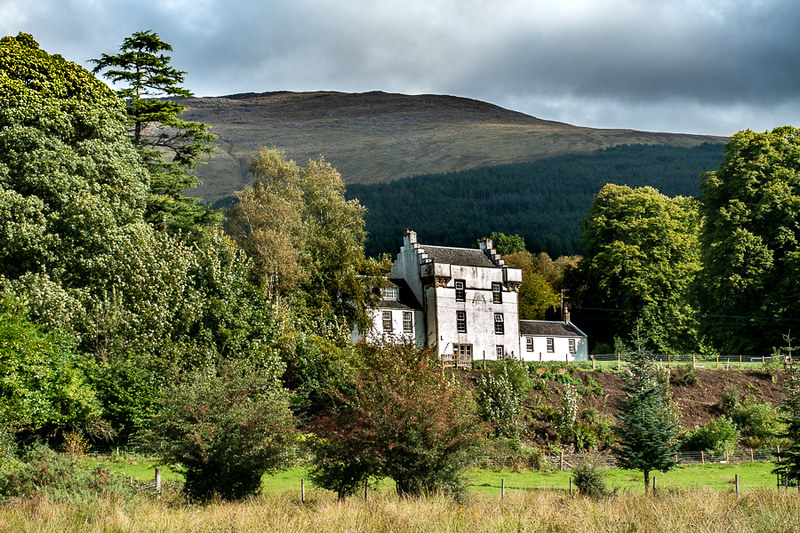 The weather Gods were being very kind and the loch was looking pretty fine (apart from the fish farms and quarries ...). Etive hills were coming into view, but mostly with a cap of cloud. Beinn Trilleachan (I think): 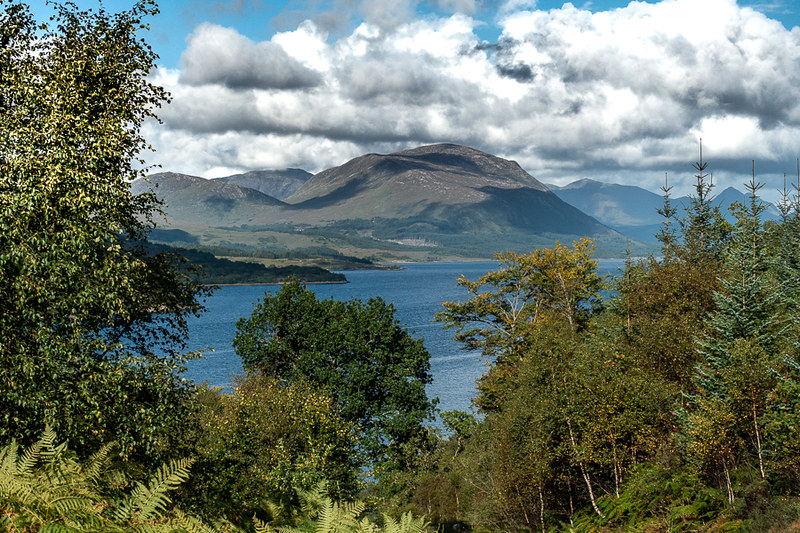 Beinn Sgulaird lurking in the distance: 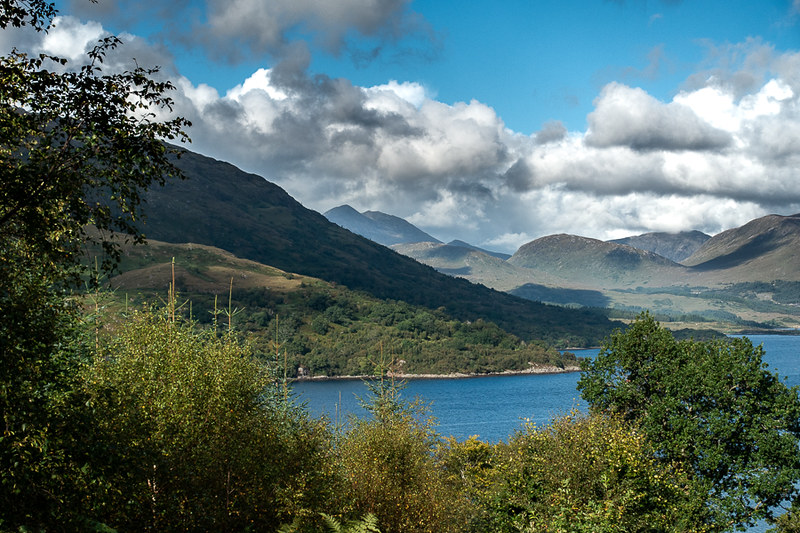 After what seemed like no time at all the plantation ran out and I was in Glen Noe, in a delightful small patch of west coast rainforest, pleasantly bereft of rain.

Turning up into the glen I worked my way past farm buildings, still on a decent track, up until reaching an old walled sheep pen. I headed out the gate, round the fence to the left (north) then the climbing started, up by the side of the burn, and onto the tussocky grass above Creag an Fhithich. 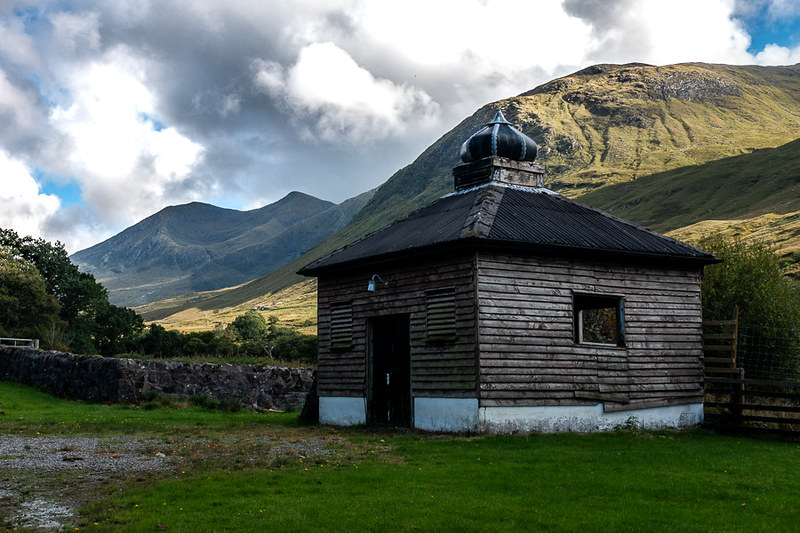 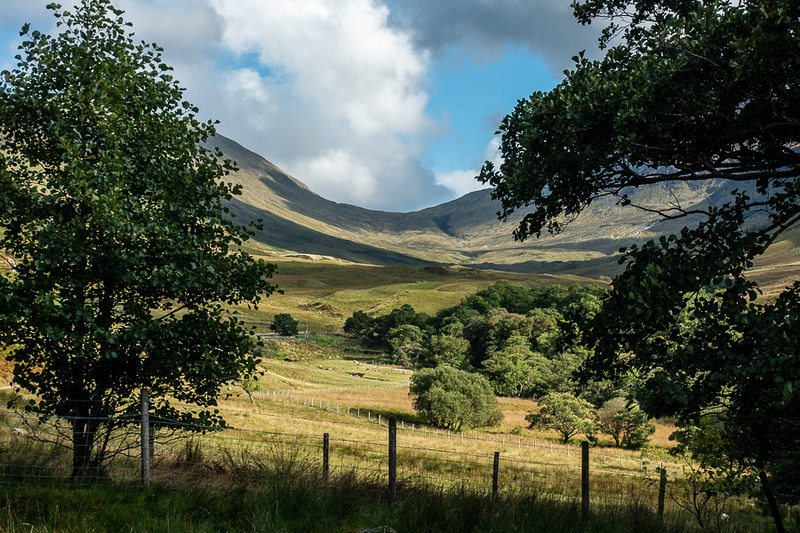 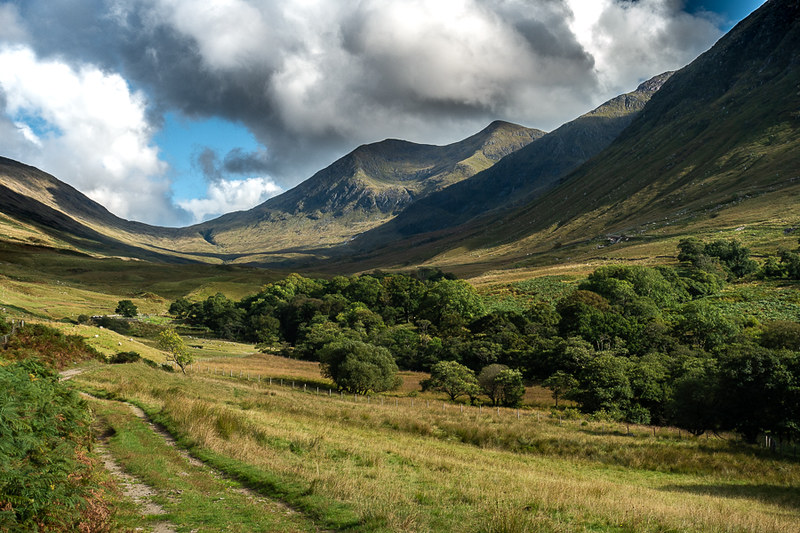 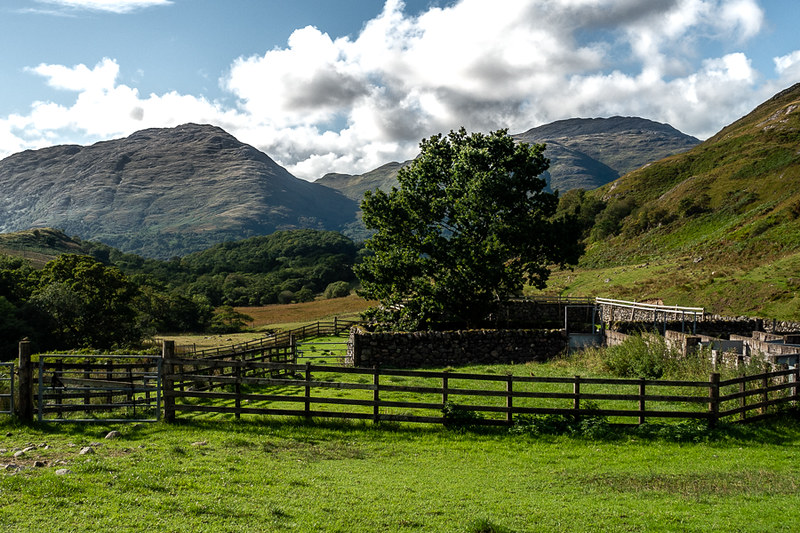 Etive hills to the north:

The going got quite tough from here on, a mixture of some bog with deep tussocky grass, not much potential for striding out - not with these little legs anyway! Looking back to Etive from the climb:

Knowing the way ahead was pathless it was time to choose my route. The ridge ahead was split by the deep re-entrant containing the Allt nan Gillean. The obvious route up the Munro would keep on the spur south of the burn, but I had already identified the outcrop of Aonach Breac, spot height 730 on the map, as a potential camp, so kept to the ridge north of the cleft: 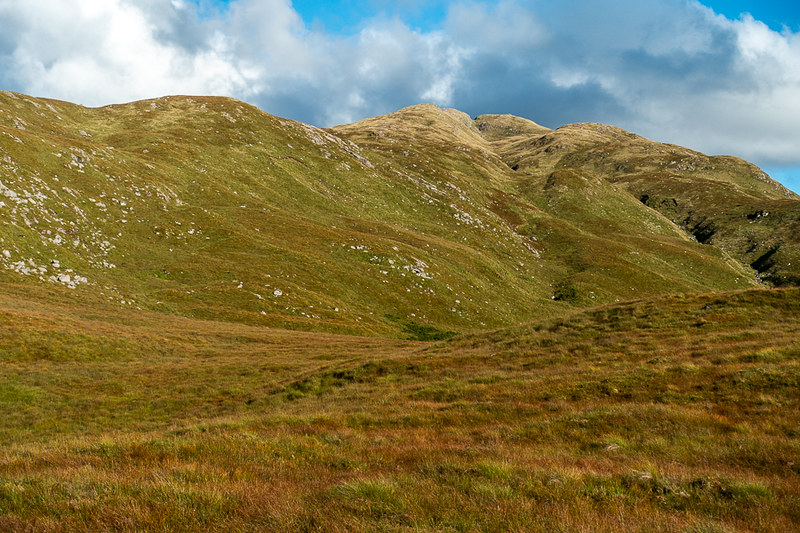 I found a decent spot after I’d been walking for just over 4 hours, some water handily placed. By now the sun was dipping, the wind was picking up and the brass monkeys were looking a bit nervous, so it was time to get the tent up and get something to eat. Looking back to Etive and Beinn Sgulaird: 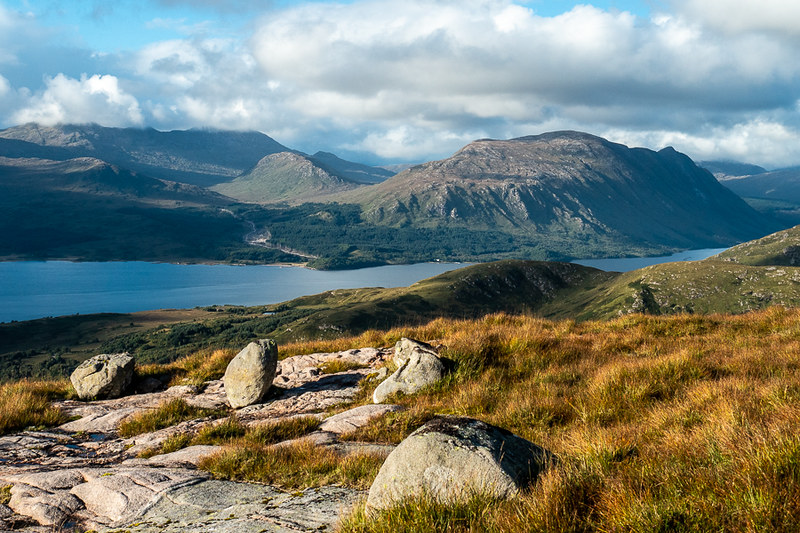 There were some pretty decent views to be had, of the following day’s summits, and of course, the view out to the south-west over the lower reaches of Etive and the Sound of Mull.
The Ben Starav massif to the north: 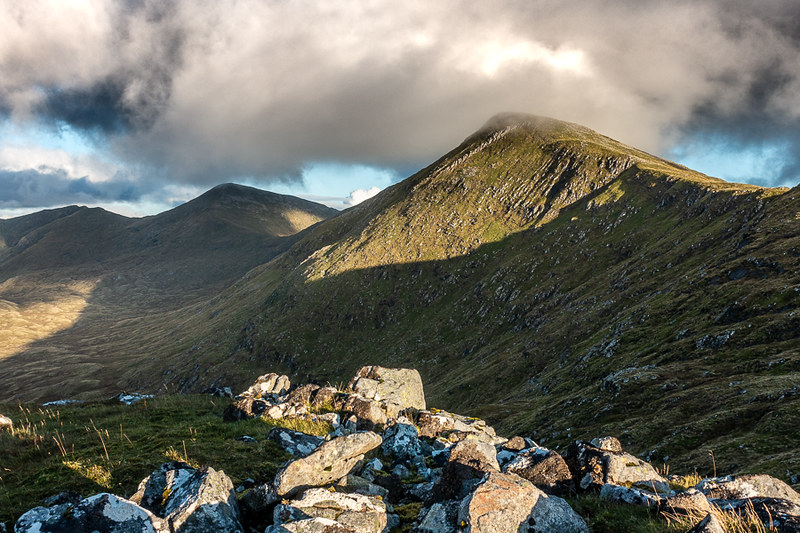 Sunset over the south-west: 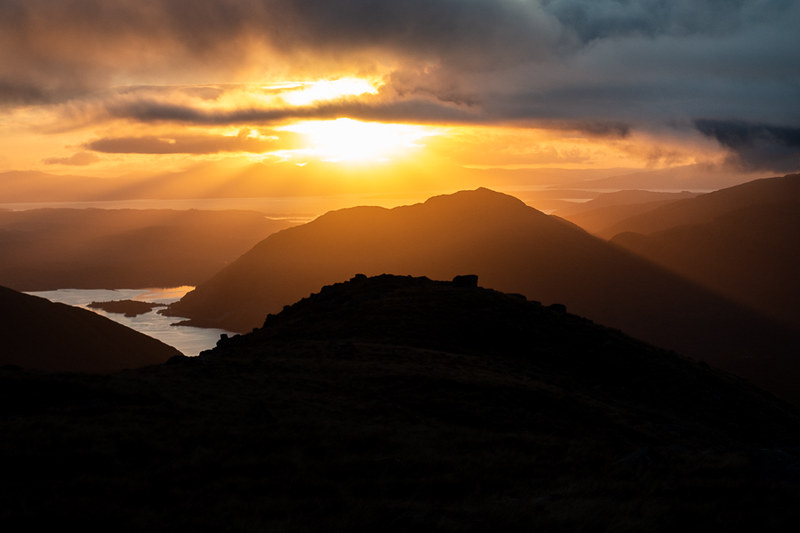 The drop in temperature and early sunset meant it was not to be an evening to be hanging around though, and I was grateful to crash in the tent, especially after a couple of bunkhouse nights of fruitless sleeping. Despite that, I didn’t have the best of nights rest, initially being woken by a bright light shining into my tent, which turned out to be the nearly full-moon rising above the peaks, incredibly bright without any other light pollution. In addition the wind picked up, making further attempts at kipping none too successful, and a glum portent of the morning to come.

Cutting my losses, I was up and about early, all packed up and ready to leave by 7 am. First task was to get back across the cleft to the ridge that led to the summit of Beinn a’Chochuill, and this involved a small back track until a non-ankle-turning gradient was reached.

Looking back to the spur where I camped:

From there it was more pathless plodding up hill, on fairly gentle slopes until the clagged-in summit was reached. 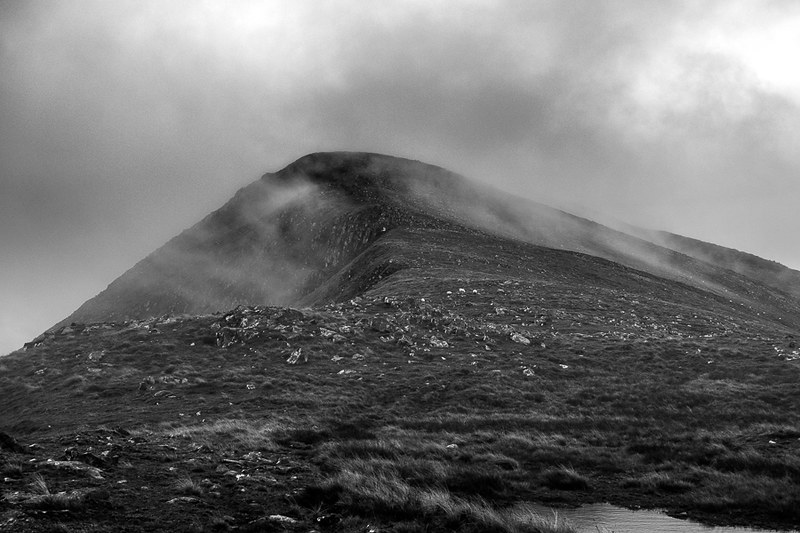 Not surprisingly I had it to myself. Replenishing myself with morning cheese and biscuits I traversed the long ridge to point 896, during which phase the rain started to come in hard, you know, that point where you realise it’s not just the moisture of the clag, so on with the waterproofs. It’s a decent trek across to Beinn Eunaich, the second Munro, at least 2.5 km, and a fairly steep pull up onto the summit, again, surprisingly deserted – for 9:30 am: 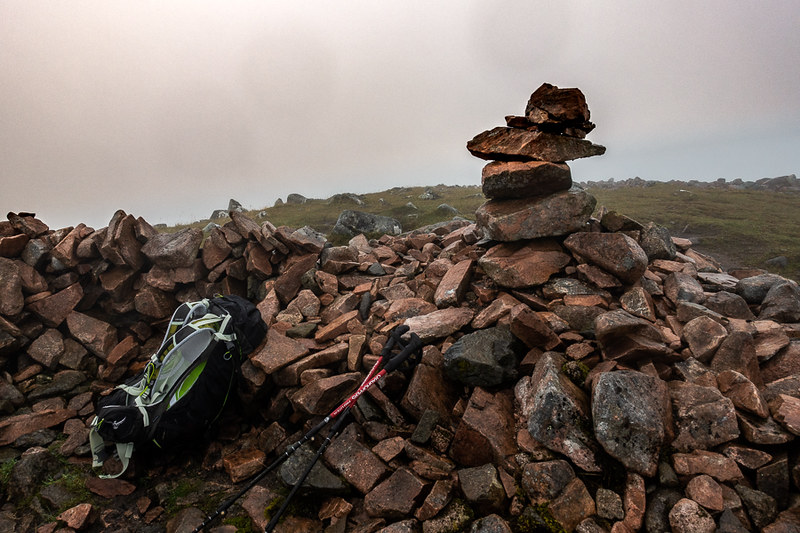 For nearly 2 km the downward path off Beinn Eunaich is gentle but boggy, then rather suddenly it gets steep and eroded, and still boggy, as it turns south-west, down steep grass, to reach the welcome track at the bottom. I hadn’t been relishing the thought of this descent with ancient knees, but in fact it’s only the top part that is really dodgy, the second half is a sensible wee path that zigs and zags modestly down the hill. Nevertheless it was a relief to reach the track that leads down to Castles Farm, and finally to come out of the cloud as well. Views starting to appear: 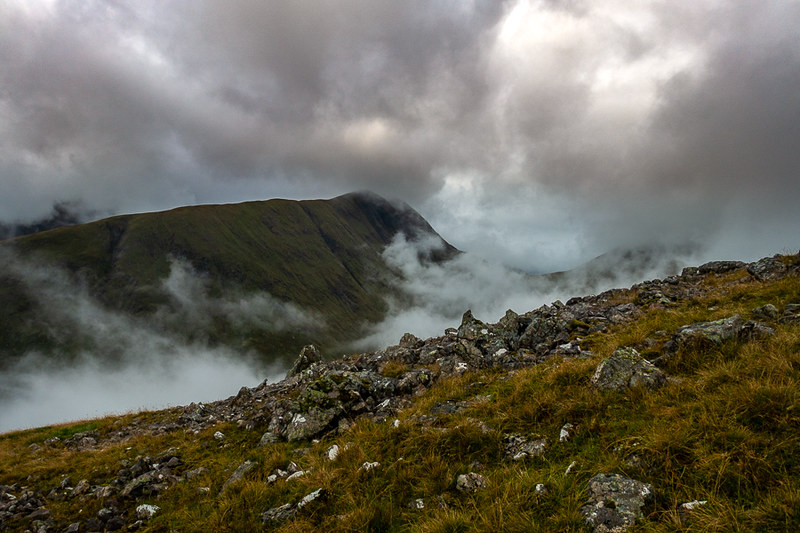 Down through the murk to the glen below:

From the hillside I’d seen a couple of walkers heading up the track, presumably on the standard WH route. Once on the track I bumped into a young lady who was heading for the bealach and then down into Glen Noe, not heading for the tops, probably wise given the weather. Having said that, at that point the rain had stopped so layers were off for the stomp down the glen under moody grey skies. There were no bovine incidents to report, the coos being particularly indifferent as I walked through and down to the main road. A few minutes along the A85 and I was in Loch Awe, with time to spare to grab a sandwich and beer at the Cruachan Inn, before getting the busy 12:50 back to Glasgow and on to home in the shire.

I couldn’t see any previous reports of this route on WH, and whilst circumstances necessitated a night out for me, it’s very do-able in a day, with two cars. The route can be trimmed by leaving the second car in the forest car park at Inverawe, saving a couple of kms. It needs a fine day though!

looks a fab trip Mr Wilson. I was on that lochside path during my secret adventures of the previous week. A few more ups and down than the map suggests

When I did Beinn Eunaich I went over Meall Copagach from the Lairig Dhoireann path, in the hope I could avoid the cows...which I didn't!

Great report there and some cracking route planning. I remember camping with Scouts there in Taynuilt in the field below the big hoose. Lovely photos, keep them coming

Really cracking pics of the first day - pity it didn't stay that way for day 2!

Your report has nonetheless whetted my appetite for these two - not yet visited.

Fine TR sir, this alleged legend was happy to oblige with transport

Glad you managed to fit this in. Not sure why your sleep was fruitless. I slept like a log

jonny616 wrote:Glad you managed to fit this in. Not sure why your sleep was fruitless. I slept like a log

Great photos of this little-seen area! - has whetted my appetite to try this different approach to Beinn a’Chochuill on my next visit.