Highland Scrambles North contains one scramble route for Slioch: a grade 2 or 3 scramble up the north-west buttress (shown in Stuart Clark's/Scoob999's walk report and youtube video from 2016). I'd travelled up to stay in Achnasheen on the evening of 24th August 2021, met up with my friend Pete, and we decided that we would try Slioch's north west ridge on our first day.

The 25th August was supposed to be sunny, but we woke up to unbroken cloud cover sitting at around 500 metres. However, it looked as if the cloud layer may be thin and we hoped it might break up later in the day, so we set out to start our climb around 9ish (a comfortable time). The route starts from the beginning of the usual route up Slioch -- the car park near Incheril in Kinlochewe -- and follows the path towards the north shore of Loch Maree. The path crosses the Abhainn an Fhasaigh over a bridge and the usual path to Slioch goes off shortly afterwards on the right. We took the path that continues straight ahead. It climbs 100 metres over a spur and descends to a flat area with ruined buildings, where two streams come down in waterfalls. The path along the loch apparently disappears. There may be some form of path up to the bealach under the west ridge, but we couldn't see it. In late summer the area is overgrown with bracken.

We clawed our way up the 50-metre bank behind the ruins, grabbing on to roots and dislodging a rain of spiders from a tree. After the steep bank, the route upwards gets a little shallower (although it is still steep), through short grass, heather and a bit of bog. There is around 450 metres of uphill to the bealach. Although that is not that much, I made hard going of it (probably still tired from driving up the night before). Pete was far more sprightly. As the first photos show, the weather was still a bit gloomy. 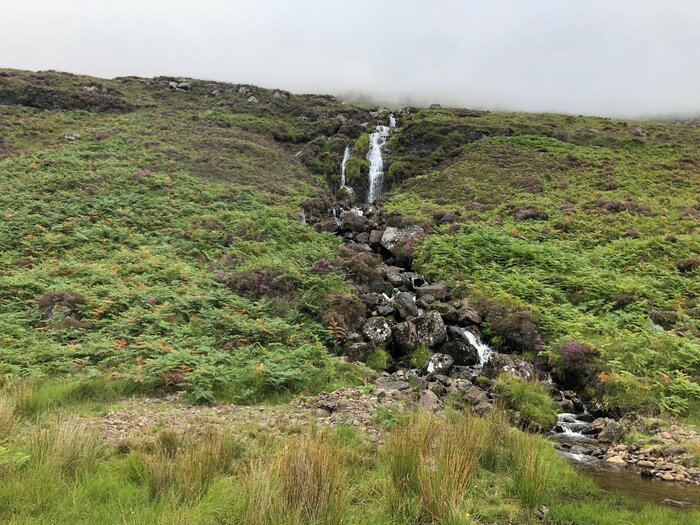 The first waterfall behind the ruins 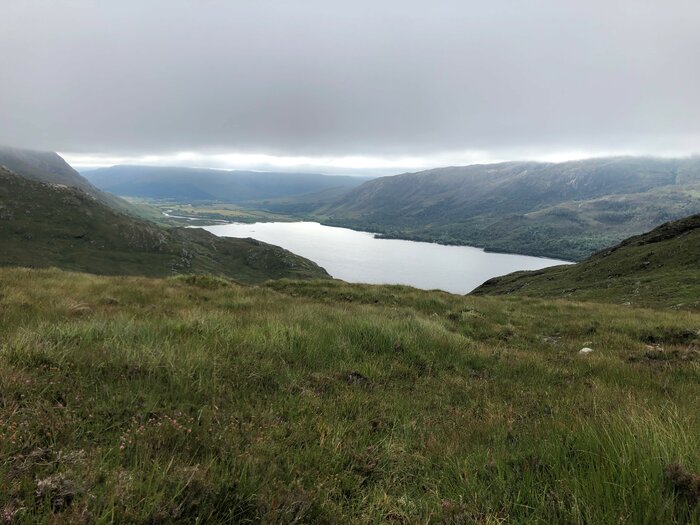 View back down towards Loch Maree

We stopped off at 560 metres below the cliffs of Slioch, although we couldn't see them in the cloud. Rather than try to find the start of the route as described in the book, we simply took a straight line towards the bottom of the north-west ridge. The grass leads steeply up to around 30-40 metres of outcrop. There is meant to by an easier gully that can be climbed (and I think I saw it later a bit further round on the right), but we climbed straight up. I would say the route we took up the initial outcrop was a little above grade 3; it was probably a moderate rock climb, at least for the crux (a full stretch heave up onto a narrow ledge with one good hand hold). Pete and I felt differently about the unexpected difficulty. 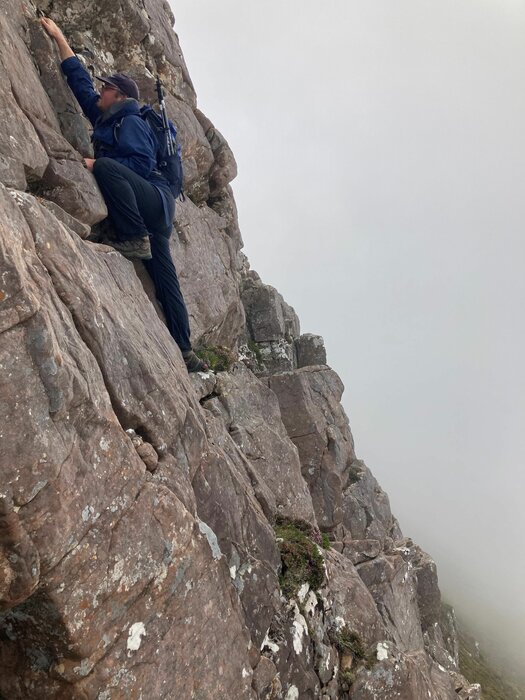 Me, climbing the crux 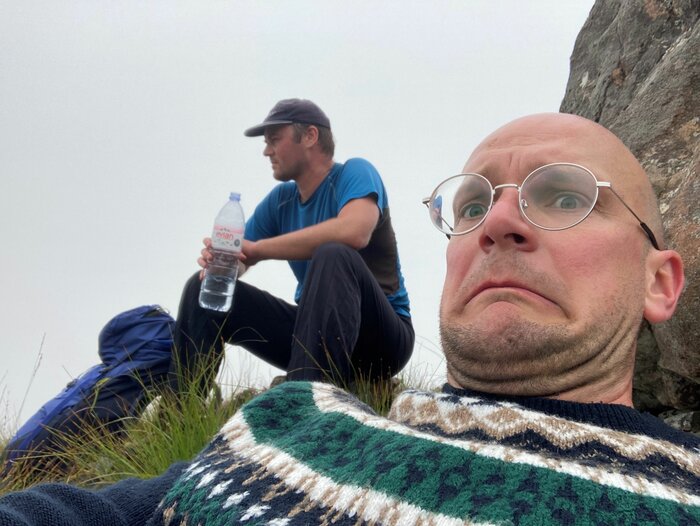 We sent pictures of the climb up the initial cliff to Pete's mother and sister Kate, and soon got a supportive text from Kate ("What the f*** are you doing up there? Get down at once d***head.").

After the initial climb, the ridge is gentler. In fact, it could probably be climbed as a grade 1 scramble. There are a sequence of outcrops that present grade-2-ish scrambling, but each one can be avoided by traversing to the right. We tried to stay on the crest of the ridge all the way up. The rock is generally firm sandstone.

Around 800 metres, it began to get brighter. And then after a few more metres, we suddenly had a view. 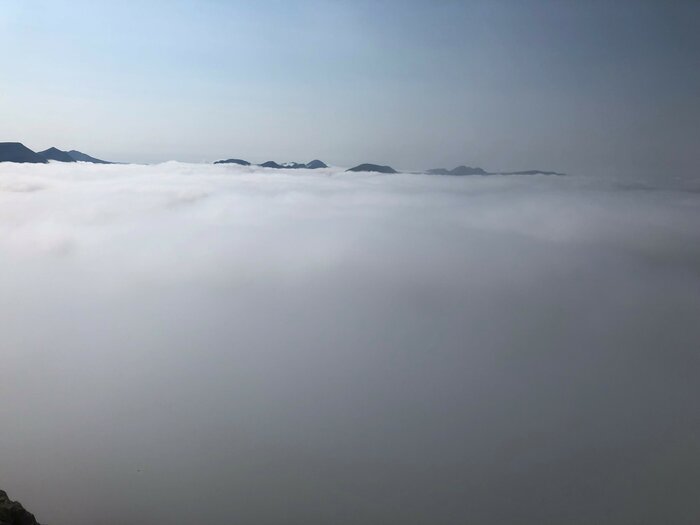 First glimpse of a view 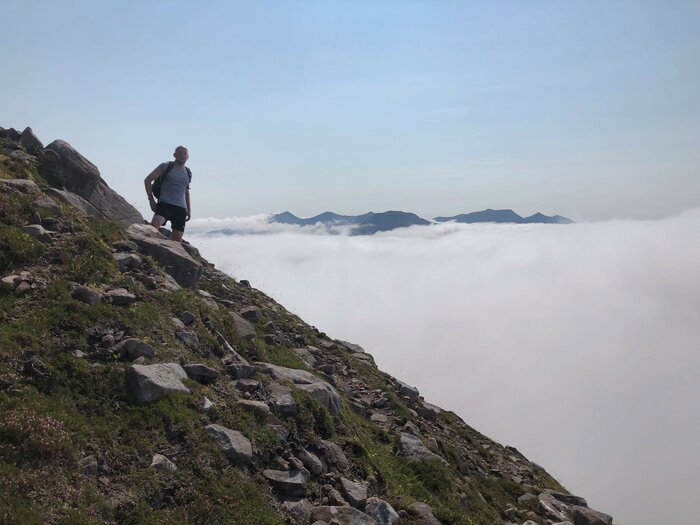 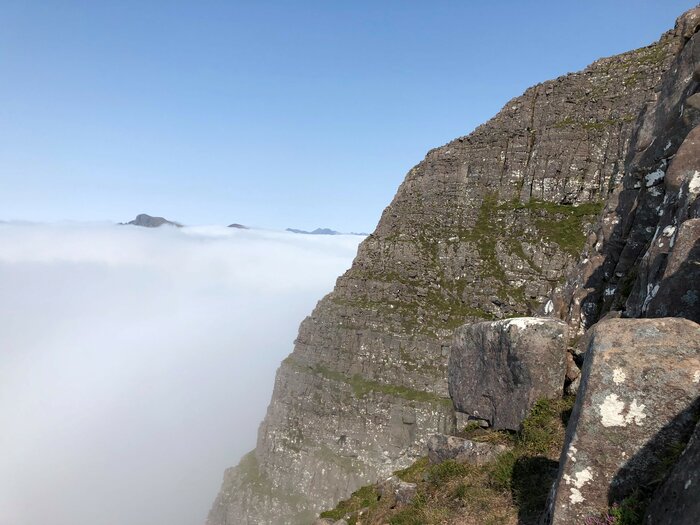 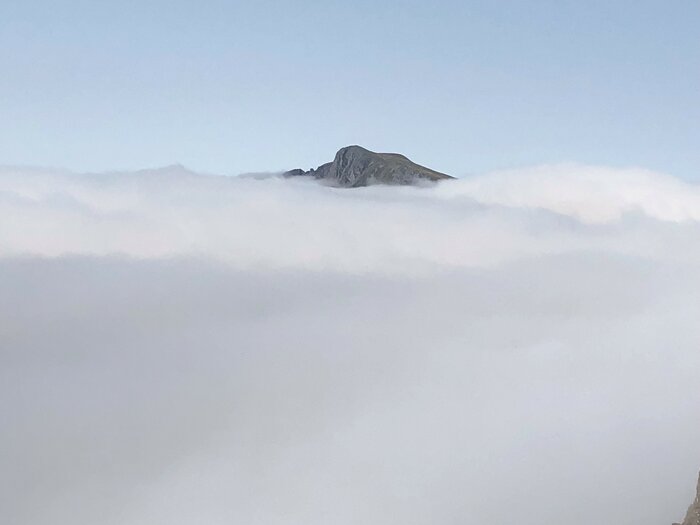 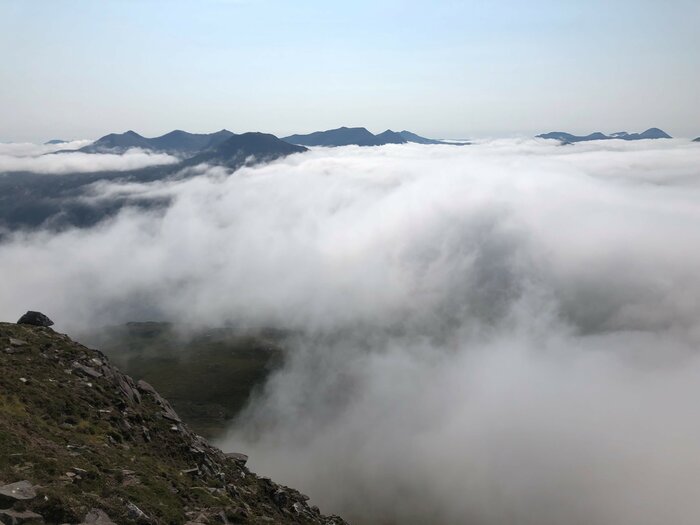 One more of the view

The rest of ridge was very pleasant scrambling in bright sun, up to a long horizontal section that looks as if it leads to a sudden drop, but in fact has an easy downclimb. 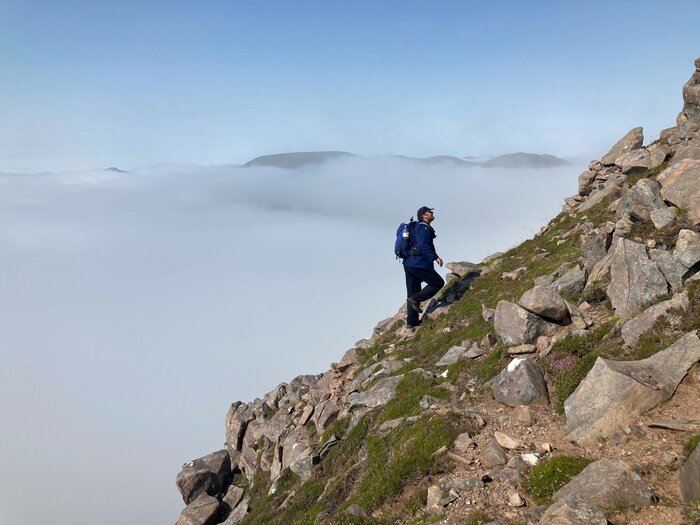 Getting towards the top 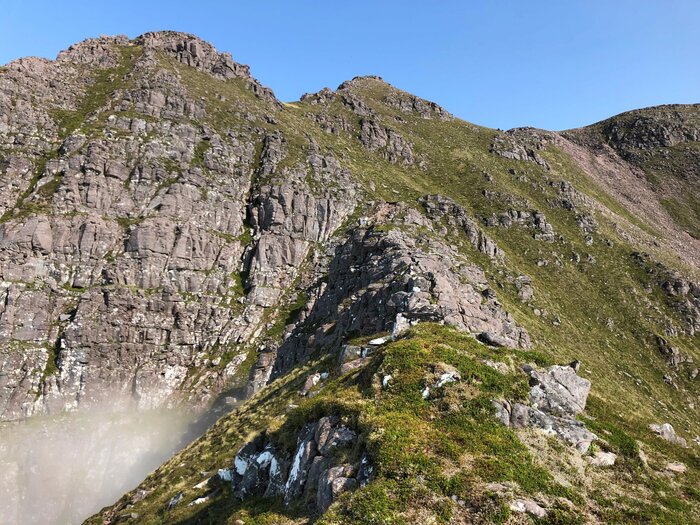 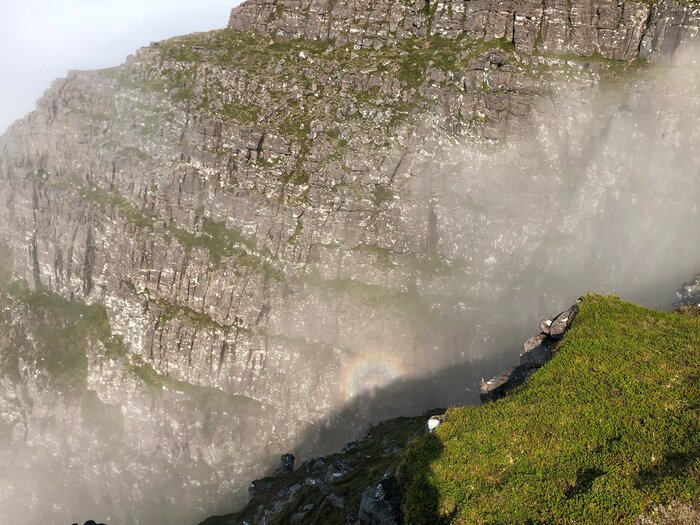 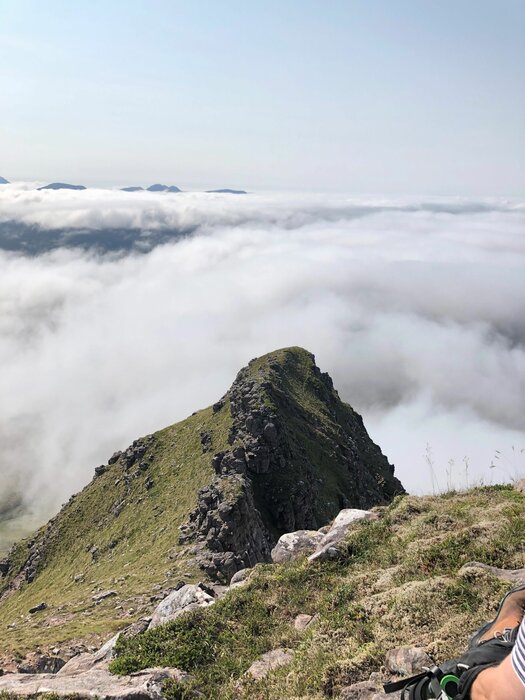 Rather than press directly for the top, we took the suggestion in the scrambling guidebook and traversed around to the left to the top of the main buttress and climbed the rest of that ridge to the top. 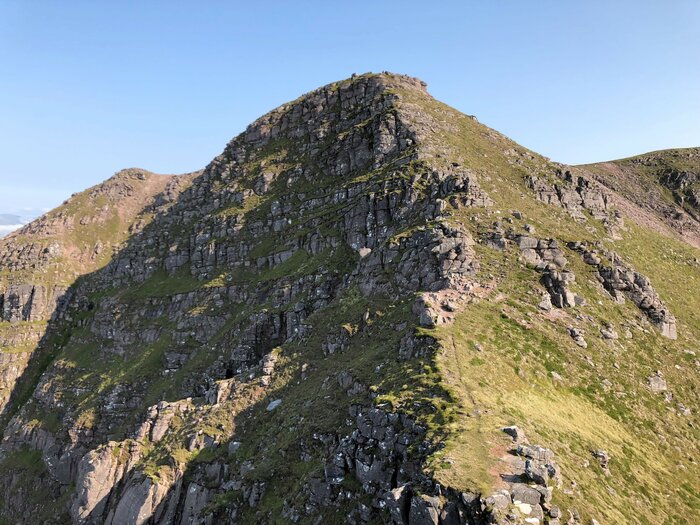 The ridge up from the main buttress

By the time we reached the summit, the cloud was beginning to break up. The views north into the Fisherfields, in particular, were breathtaking. It is not easy to decide which of the photos from the top are the best, and I took too many, but the following selection probably give a good impression of the views. 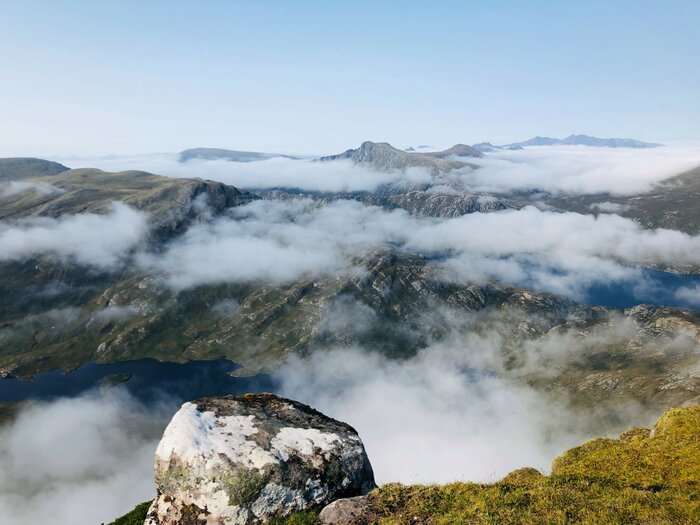 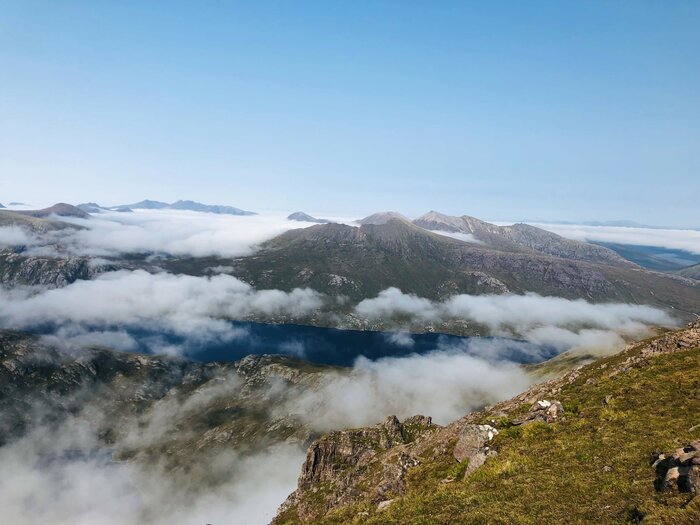 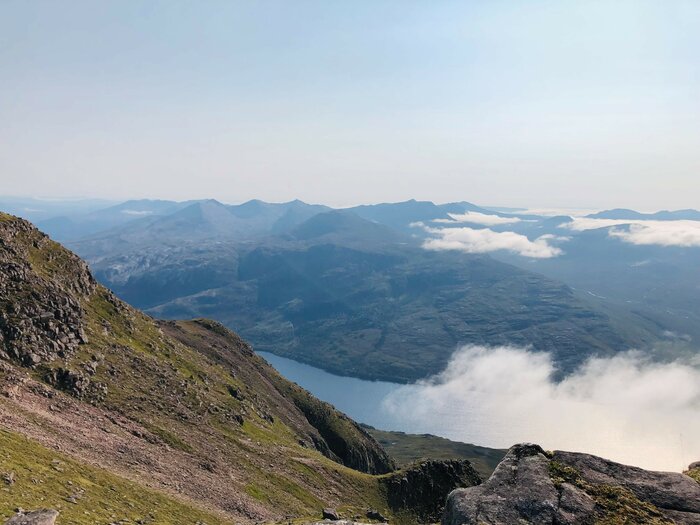 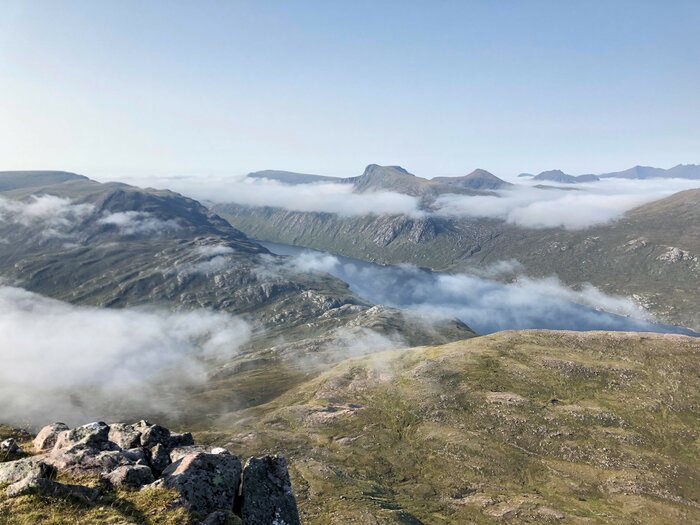 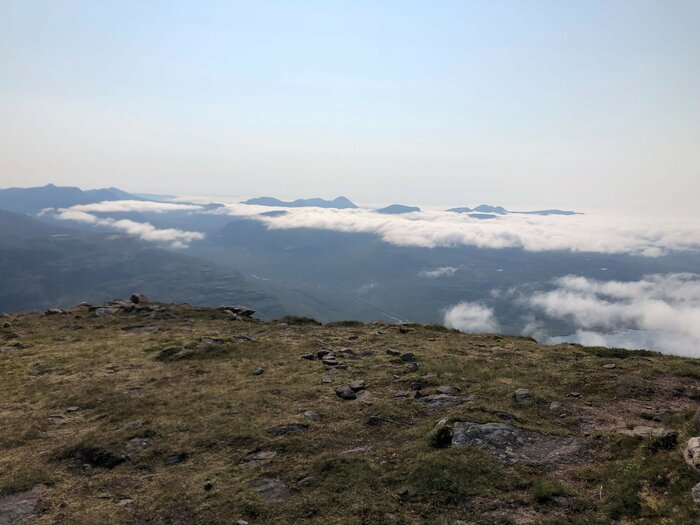 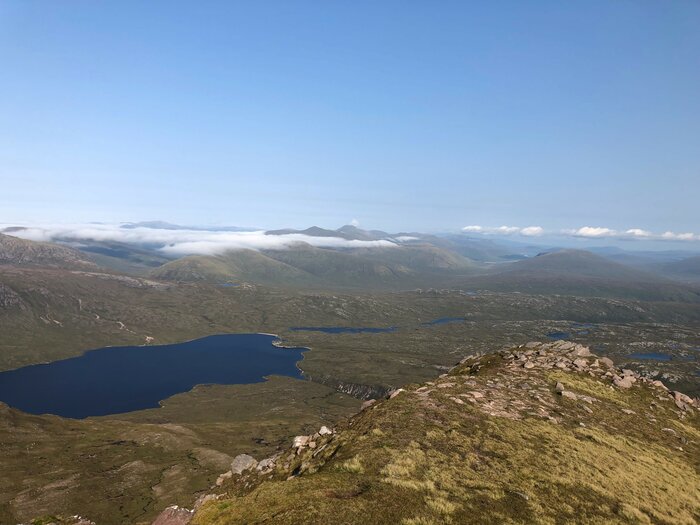 Clearer inland towards the Fannichs

We visited both tops of the mountain and descended via Sgurr an Tuill Bhain (via the usual path). We lost the path briefly around Meall Each but the ground was dry and we found it again once the descent resumed. I'll finish with a few photos of taken on the way down, showing Slioch in the evening sun. 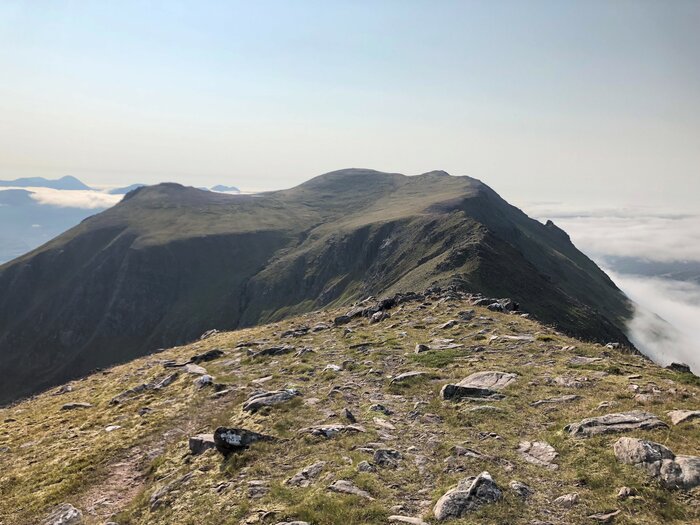 Looking back at the top of Slioch 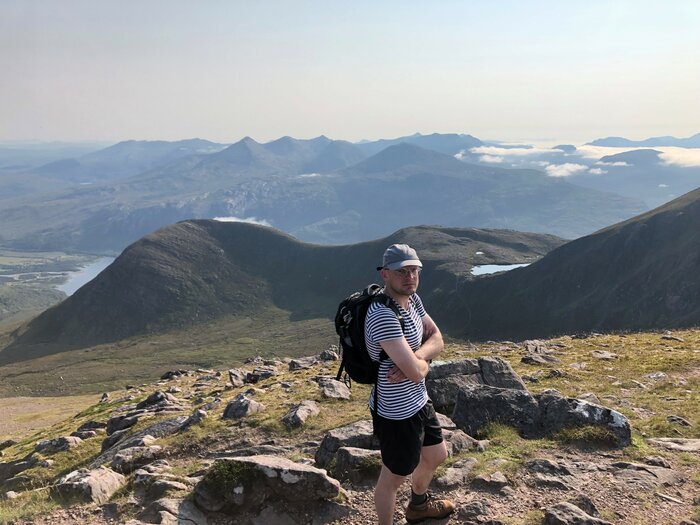 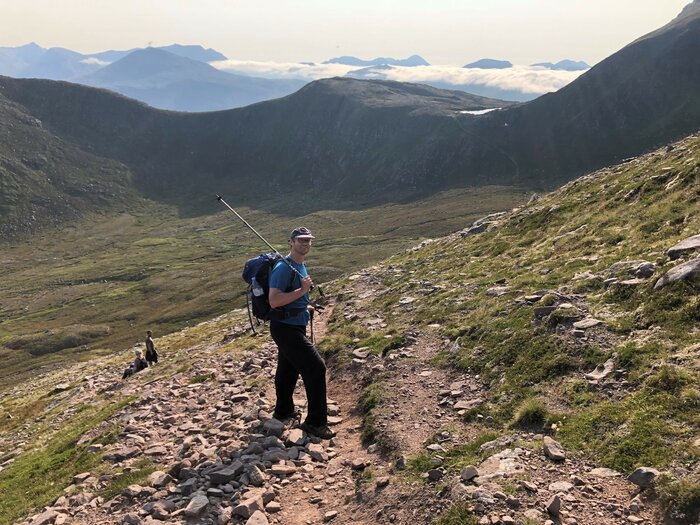 By contrast, I am a ray of sunshine 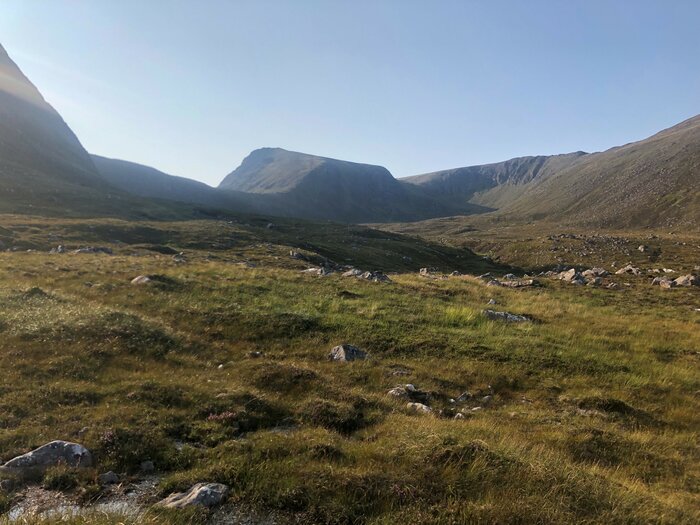 Down in the coire 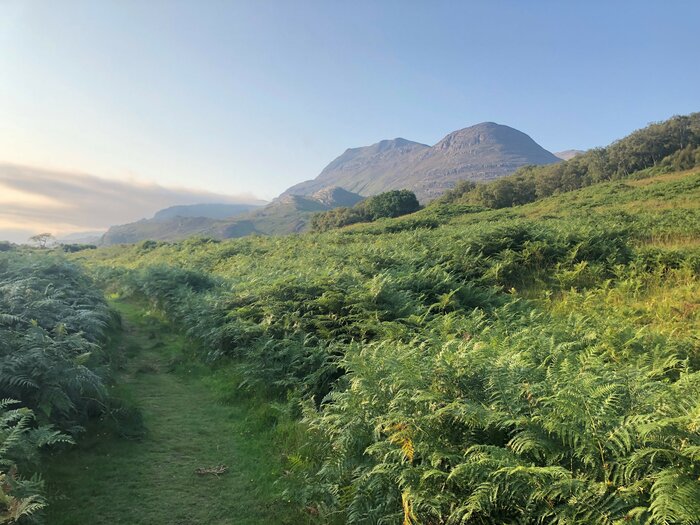 That does look like an excellent way up! And fabulous to get an inversion somewhere like that.

As the “Pete” so vilely slandered in this walk report I would like to clarify that I did NOT completely shite it at the crux as Chris implies. I simply had an unrelated issue with my legs, which forced me to sit down and rendered me unable to get up again for a few minutes, all the while trembling violently - which I did entirely of my own volition, in order to keep warm.

PDK_Mitchell wrote:As the “Pete” so vilely slandered in this walk report I would like to clarify that I did NOT completely shite it at the crux as Chris implies. I simply had an unrelated issue with my legs, which forced me to sit down and rendered me unable to get up again for a few minutes, all the while trembling violently - which I did entirely of my own volition, in order to keep warm.

Had planned to ascend the NW scramble side at the end of the summer this year - had a full inversion on Liathach a few days after this which, in the end, had to do as the weather/work didn't present a reasonable chance. Looked like a great way to take on Slioch!

Both reports look exposed but I suspect once on the rock you get more comfortable.

Another great report, thanks Chris. You will not be surprised that this is on our 2022 list.