After a couple of reasonable days out, Jackie decided to take it a bit easier today so we opted to cycle down the side of Loch Ba. We parked up at Killiechronan and cycled the first couple of miles on tarmac to the estate track turnoff.


New_Route (3).gpx Open full screen  NB: Walkhighlands is not responsible for the accuracy of gpx files in users posts 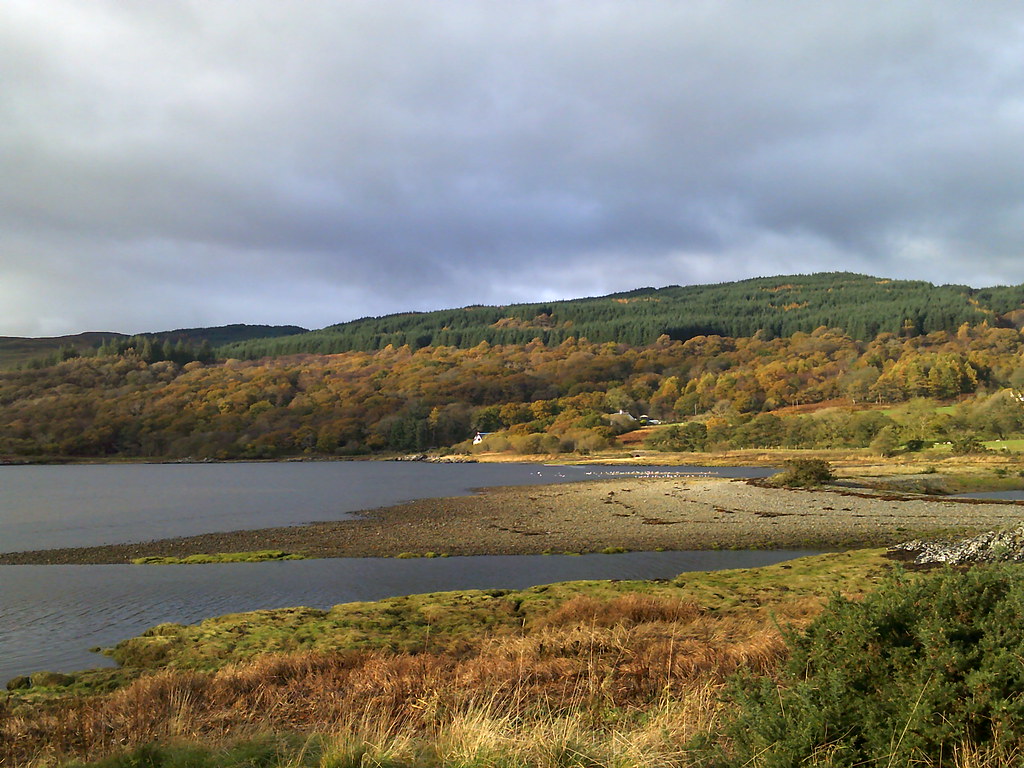 What we immediately discovered on leaving the road was that although the track looked decent, it was surfaced in sharp cube-shaped stone which was really painful to cycle over. We wondered if it would improve further on but it didn't, so we soon abandoned the bikes after reaching the loch shore. We didn't really have a plan in terms of how far we were going, so just wandered down the side of the loch for a bit. 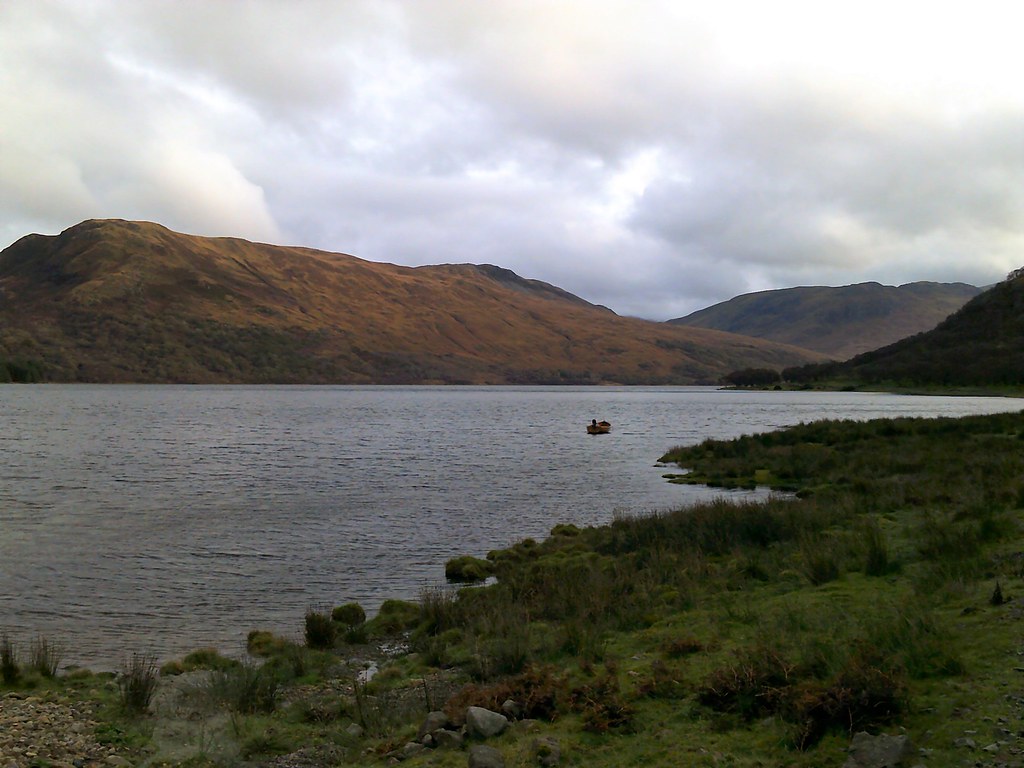 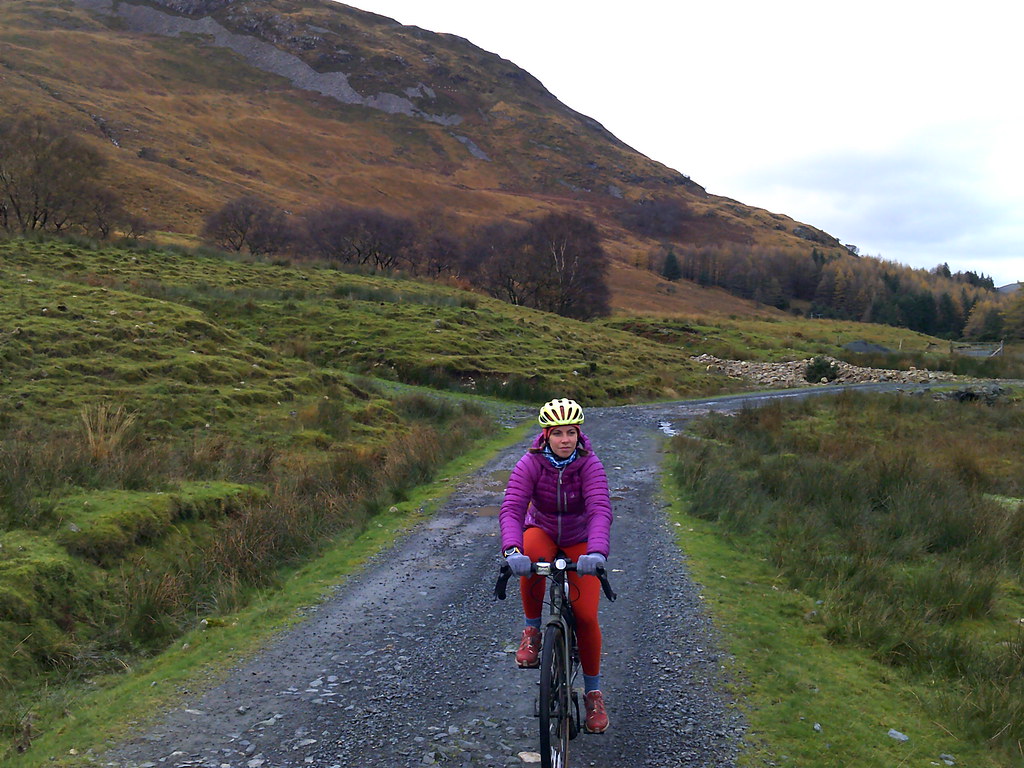 The cycling looks good but it's actually really rough!

Loch Ba is lovely, and feels much more like it should be up in Sutherland than way down in the SW Highlands. We could see some shooting was going on along the hillside, everyone gathering at Knockantivore afterwards. There were great views of the surrounding hills, with the lower summits of Beinn a Ghraig and Beinn na Duatharach looking well worth a visit sometime. 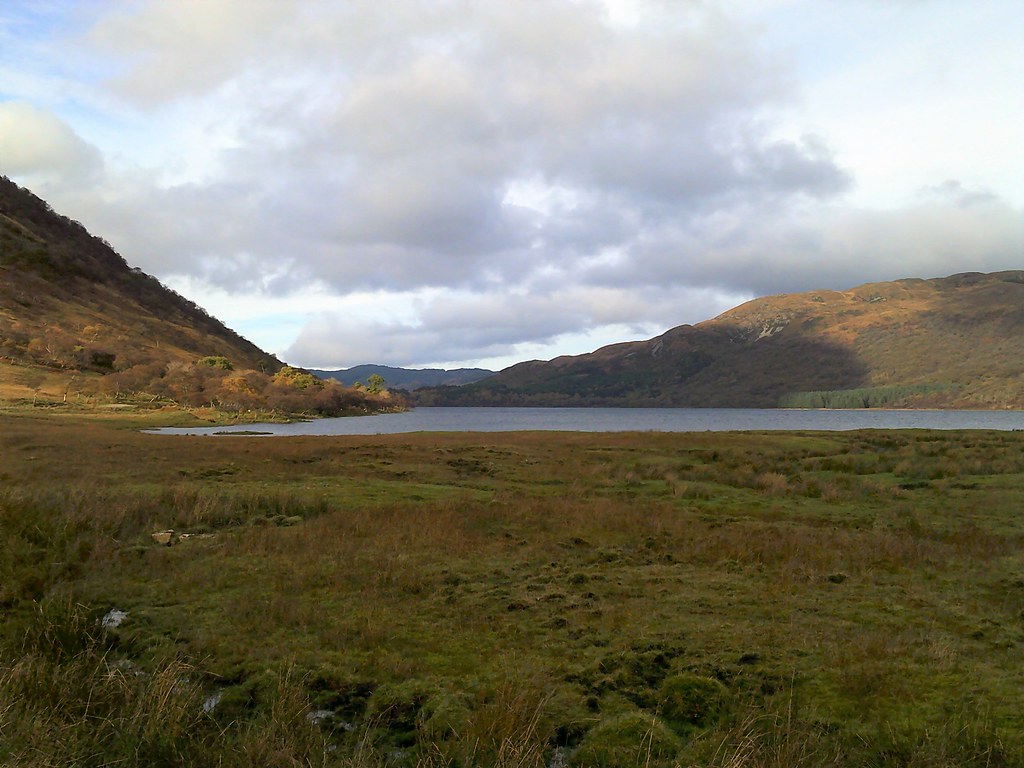 Looking back up Loch Ba from Knockantivore 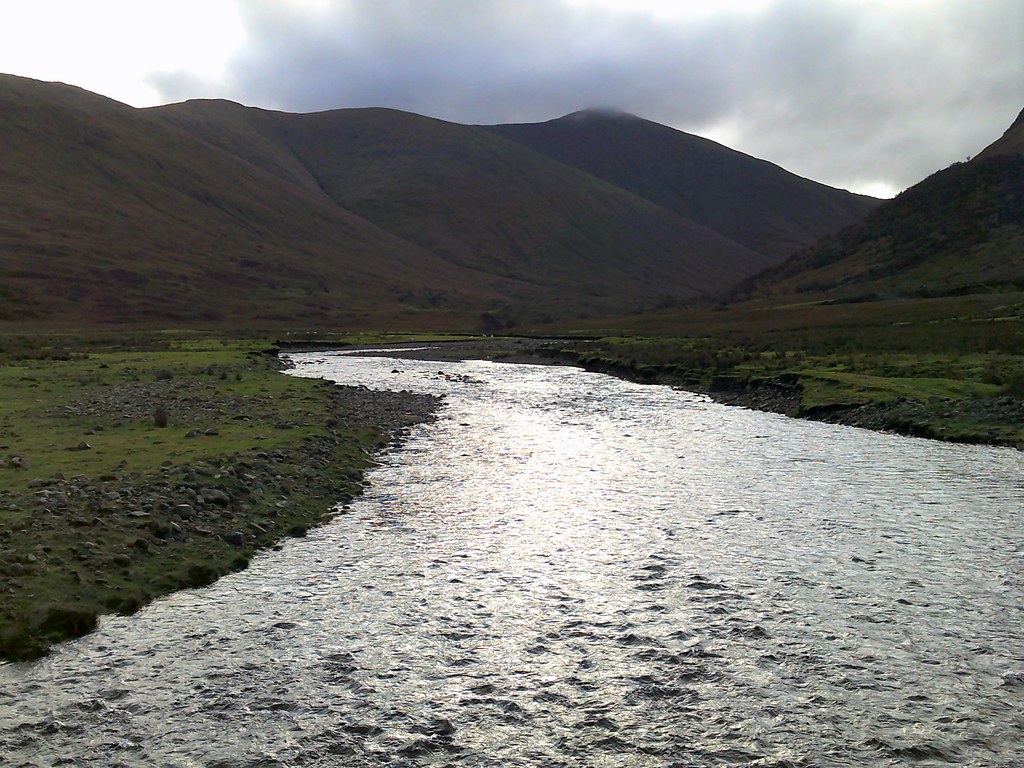 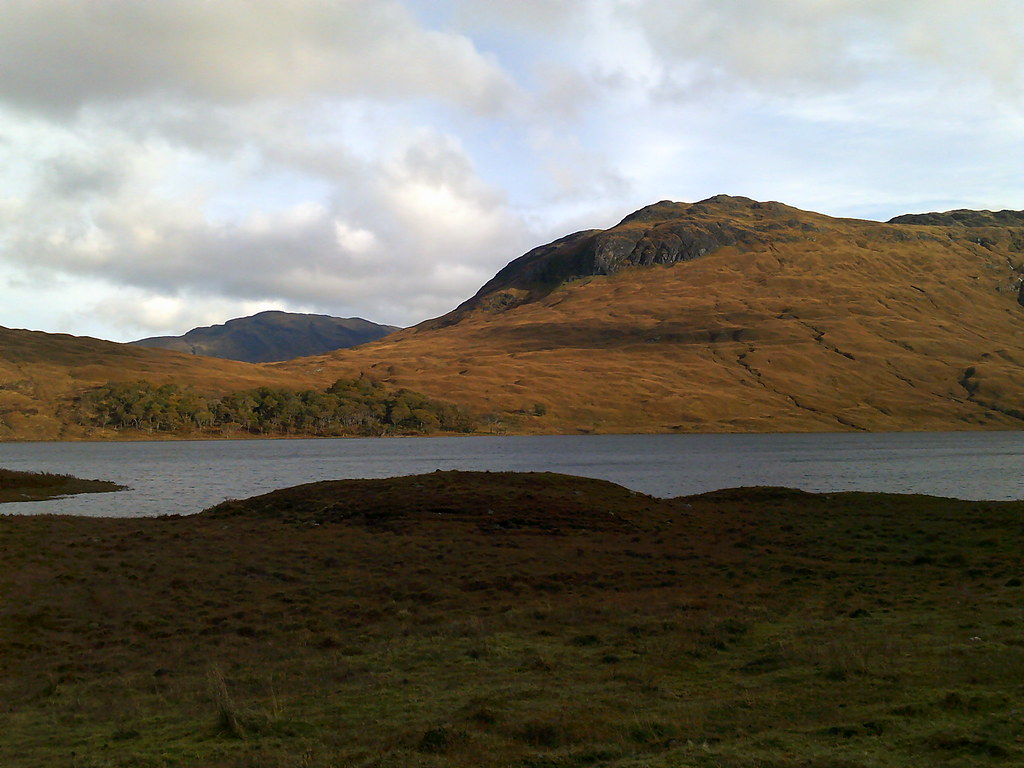 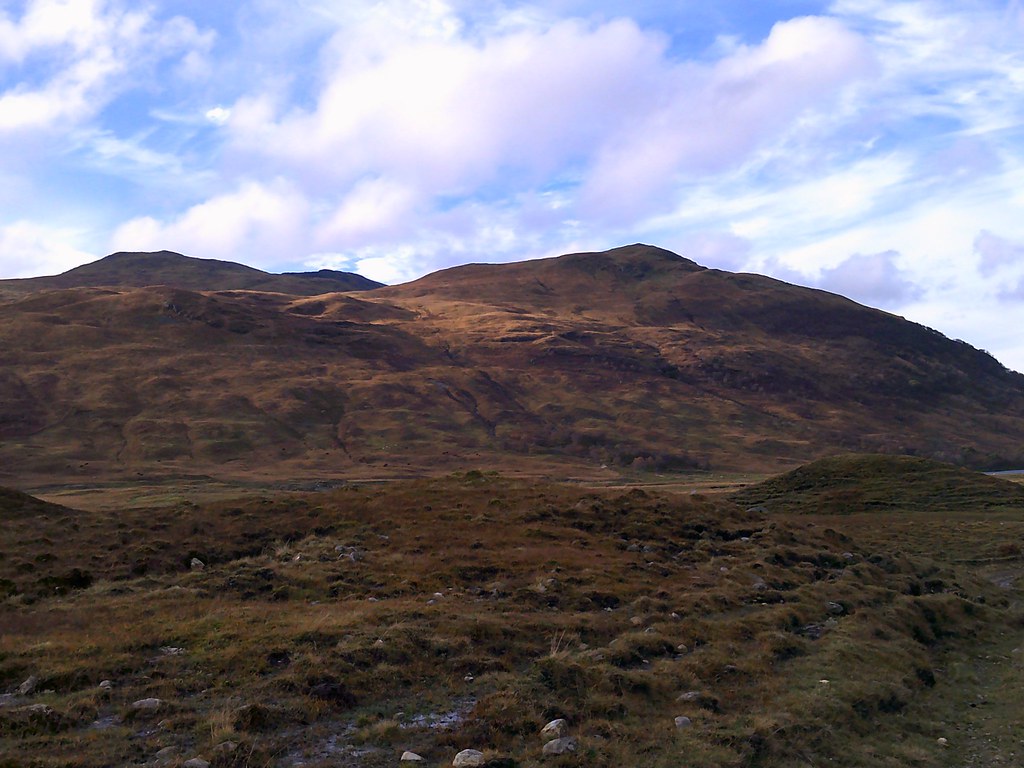 Back side of Beinn a Ghraig

We reached a ford just short of Coill' and Dubh Aird and decided to stop for lunch here rather than cross it. It was then a nice stroll back to the bikes. The wind was now getting up but fortunately it was behind us back to the car. 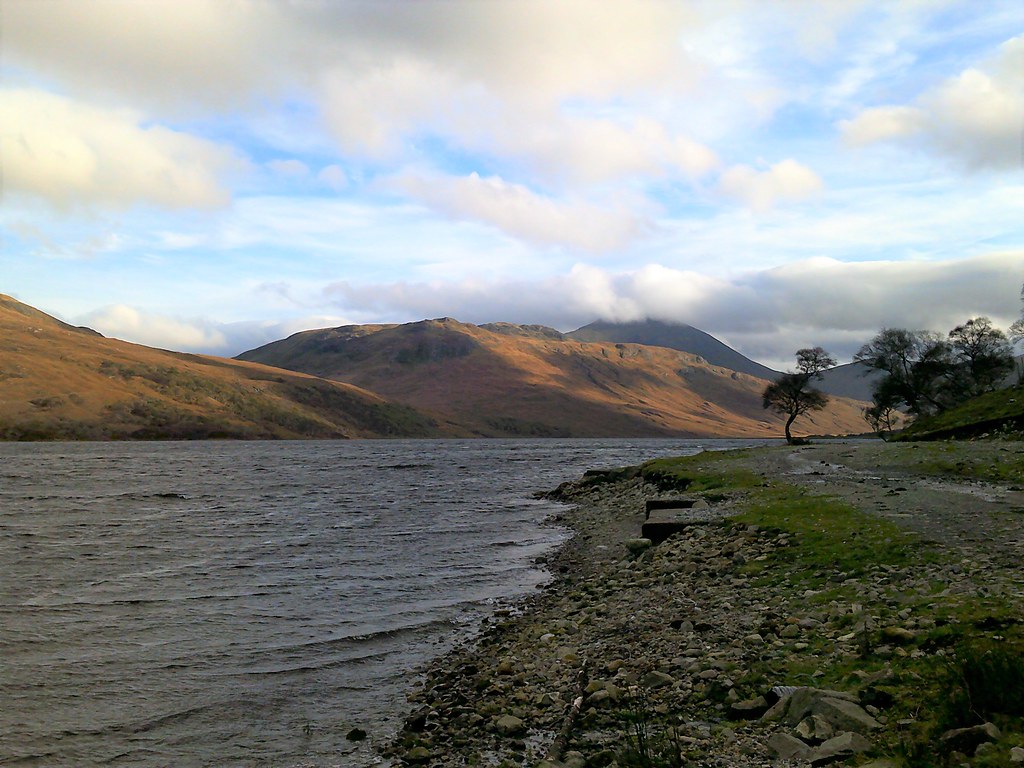 The weather was due to switch to windy with heavy showers later in the afternoon but I fancied doing one longer walk while we were here. The adjacent Beinn a' Ghraig would have resulted in Jackie having to drive the 12 miles home on winding roads in my car which she wasn't too keen on (I would have had to cycle back afterwards too), so I decided to go up Beinn na Drise instead from the Eas Fors - only 4 miles away from home and on the quieter bit of the road. We both had a look at the waterfall then I carried on above, crossing a couple of fences and some bracken and finding that I could have followed a small track up to a phone mast instead. Still - waterfalls! The views out across Ulva were great but it was clear that wetter weather was approaching. 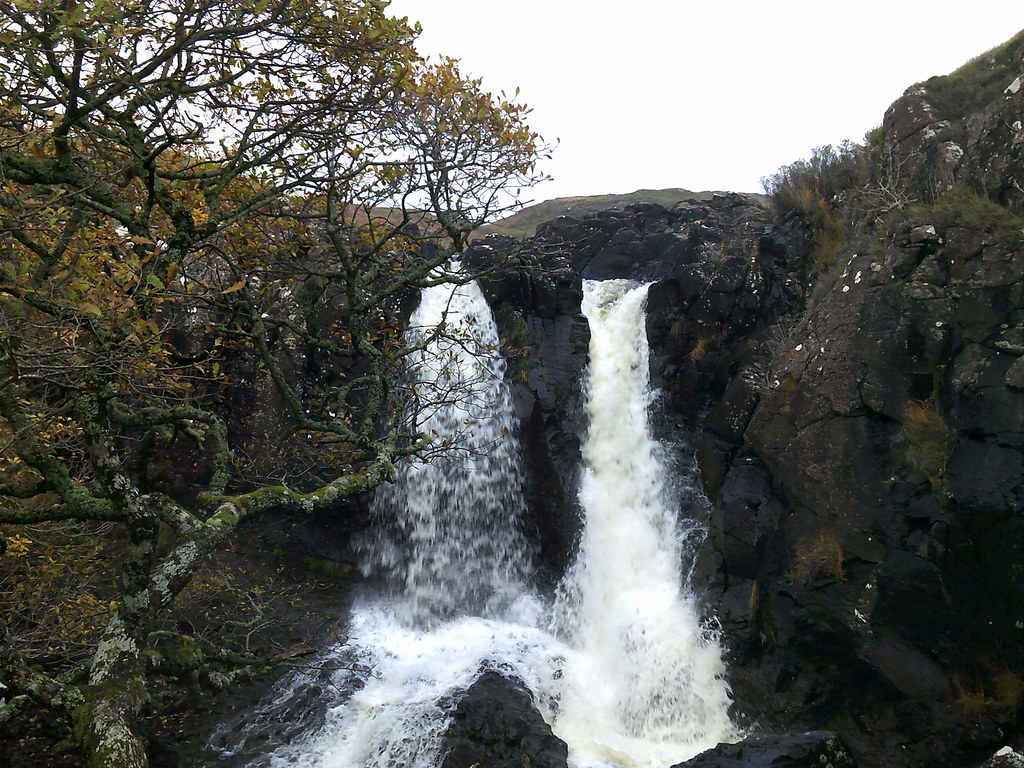 While I had thought to cycle back from Eas Fors, Jackie had suggested I do some kind of traverse, and sure enough it was possible to link a number of grassy summits together by a broad ridge, finishing up at Kilninian. This is what I intended to do so I didn't leave my bike at the waterfalls. 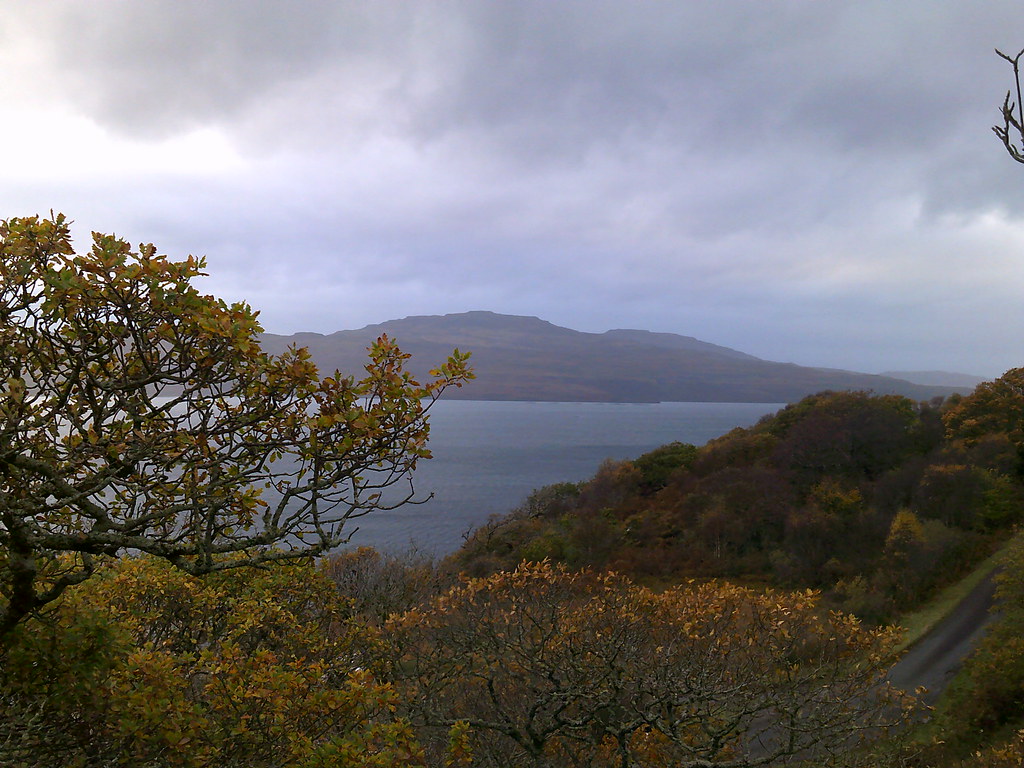 Ulva looked great as I made my way east to the main SW flank of Beinn na Drise. We had thought about visiting but it was more complicated beyond the end of October, and we decided to keep things simple. Since we'd like to go to Gometra too, it seemed better to keep it for another time when Jackie had more fitness. 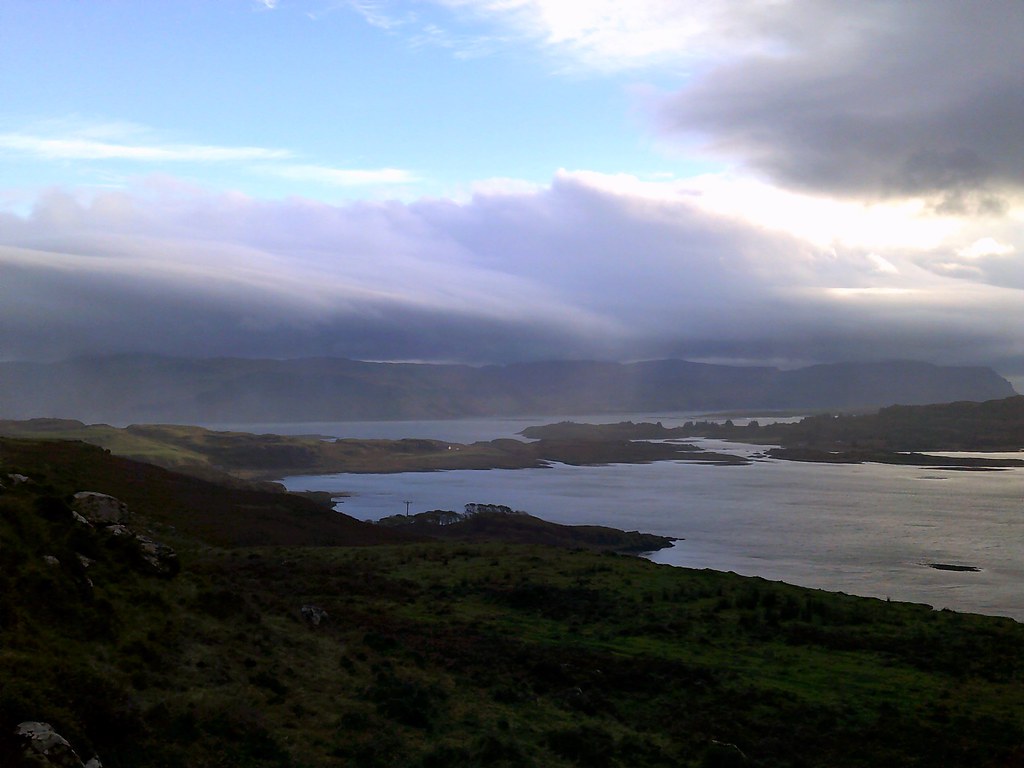 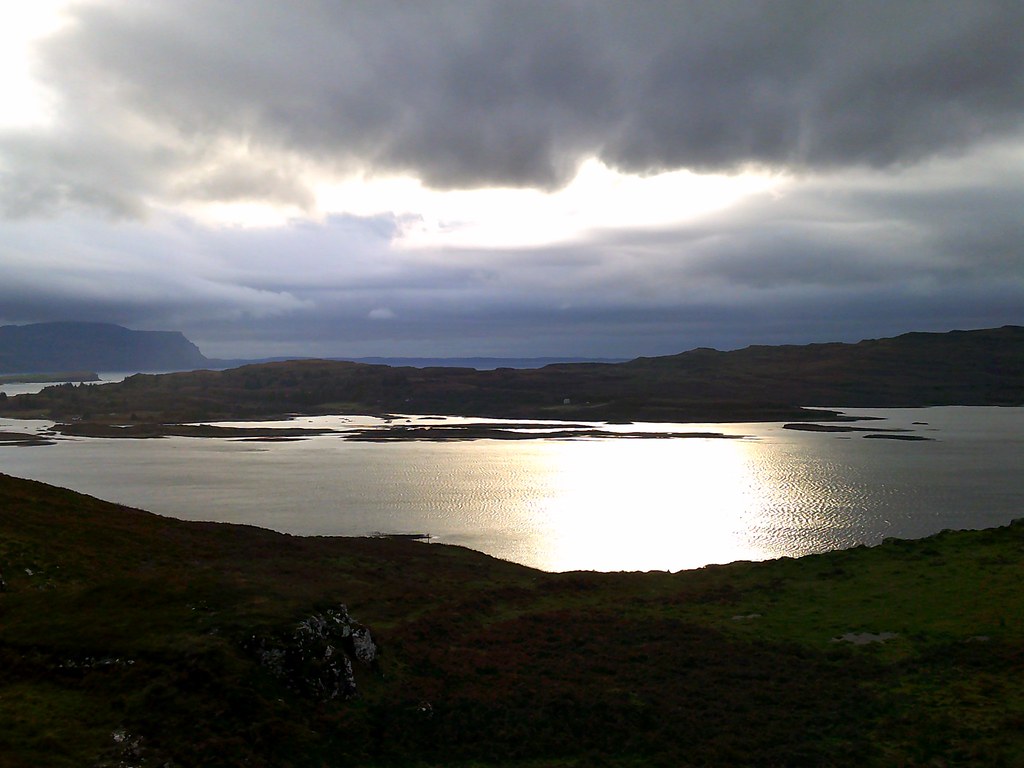 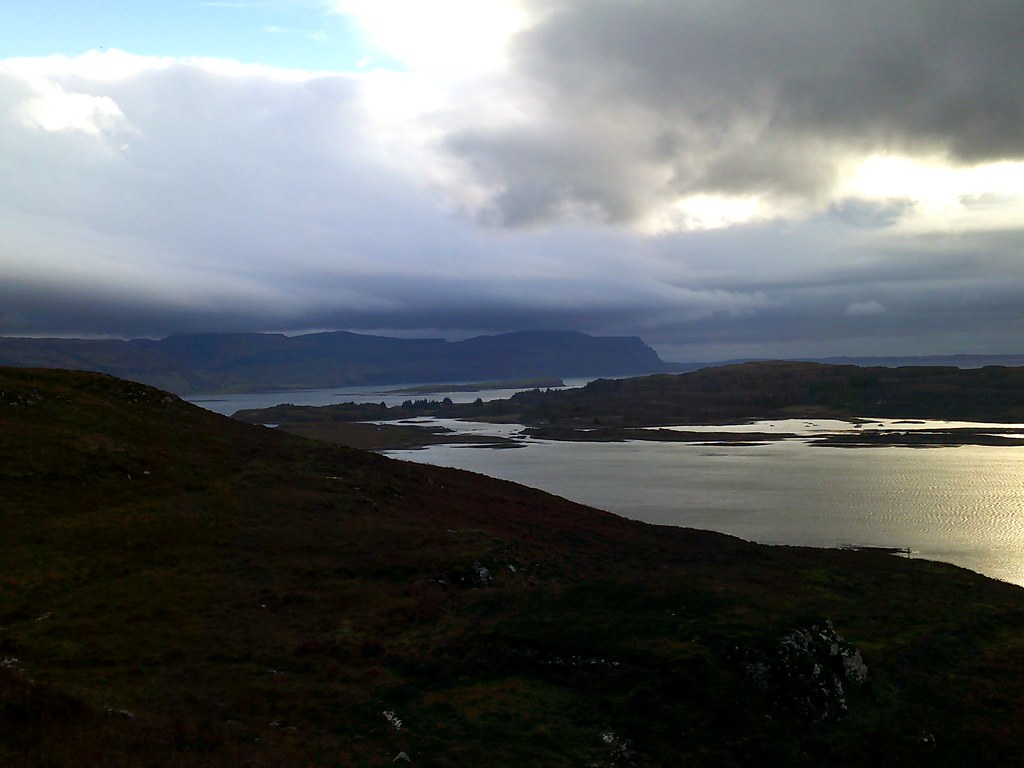 Ardmeanach across the Sound of Ulva

I crossed a burn before gaining the main flank of the hill and headed for a prominent outcrop which I knew wasn't actually the summit. Ben More and neighbours briefly came into view here, capped in cloud. Sensing some brutal weather I put my waterproofs on in the lee of the hill before braving the last section to the summit. While the terrain was easy going high up, the gusts weren't! I spent no time whatsoever at the summit (despite it having a sizeable circular shelter around the trig point) and immediately dropped off to the north where the shower stopped and the wind disappeared immediately. 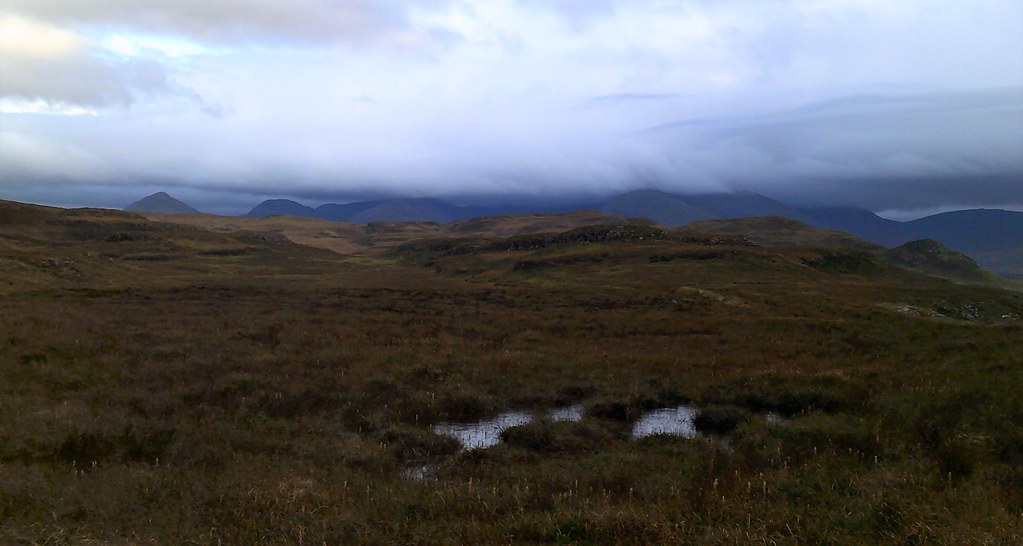 The big hills of Mull (under the clouds as usual) 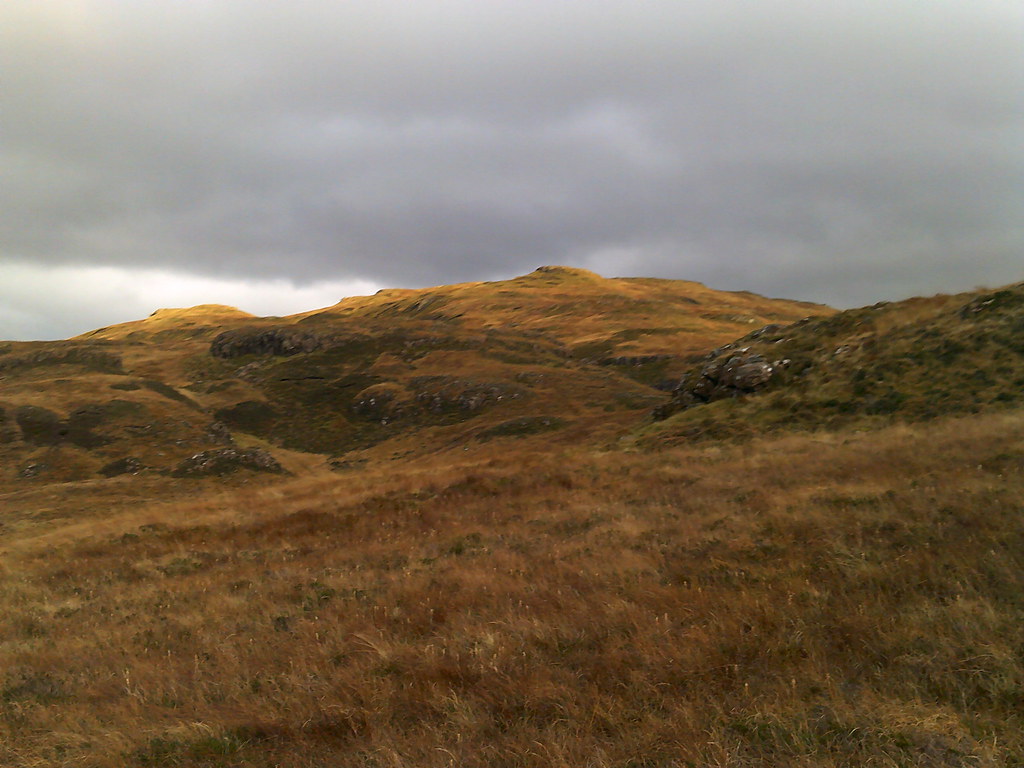 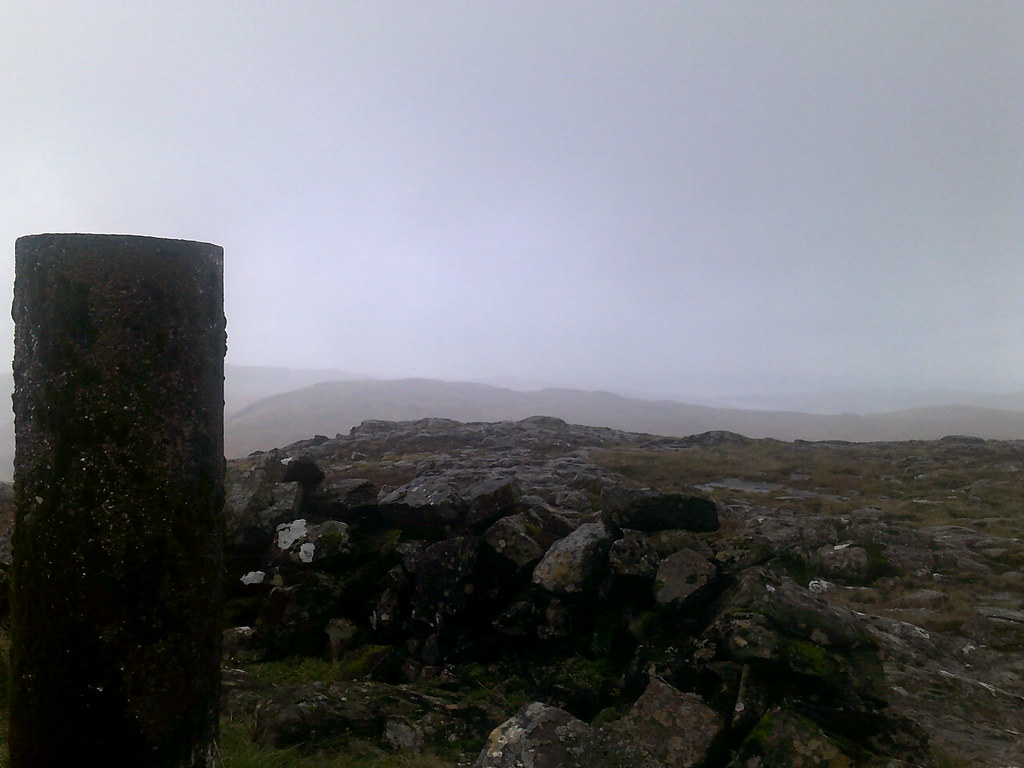 It only took about 5 minutes for me to start overheating once out of the wind, so the waterproof trousers were dispensed with very soon. I had managed to trap a nerve in my back earlier in the week which had tensed up all of the muscles in my right leg - this made the downhill sections in particular a bit of a hobble.... 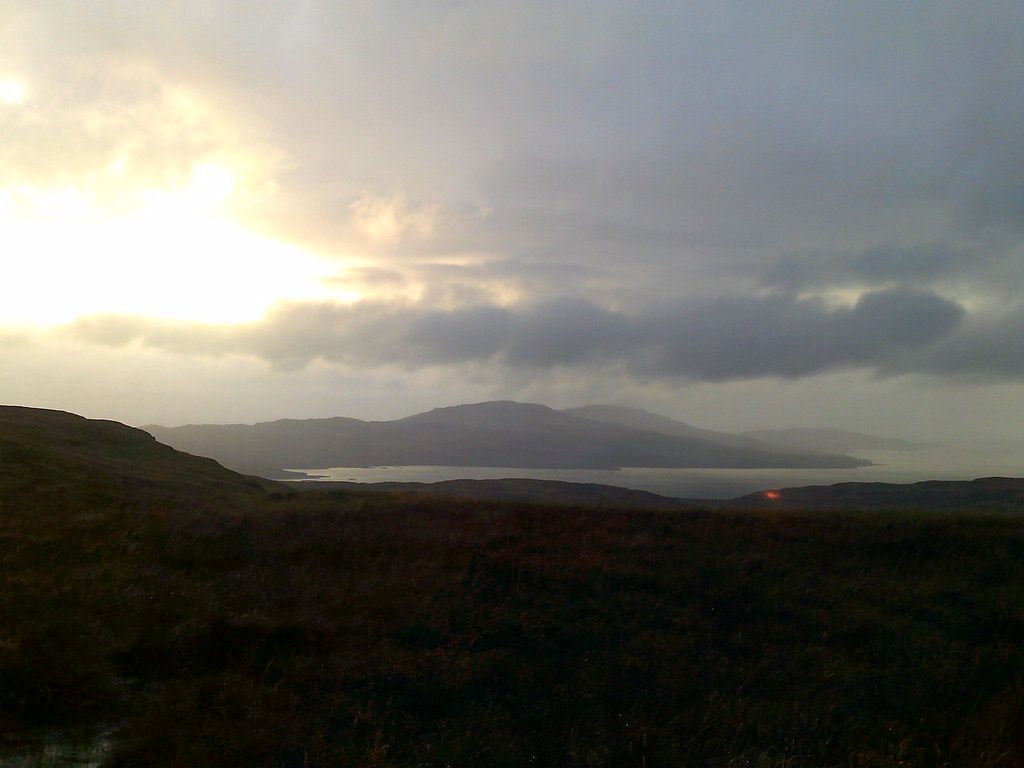 From here I continued my route over Beinn Buidhe, Cnoc an da Chinn, another Beinn Buidhe and Beinn nan Clach Corra. All of these were fairly similar grass-covered moorland with outcrops strewn around, the odd steeper rockier ascent notwithstanding. The visibility was never as good as when I started out but there were intermittent good views across Ulva, across the Treshnish Isles (the main theme of the week) and eventually to Ardnamurchan and Rum. 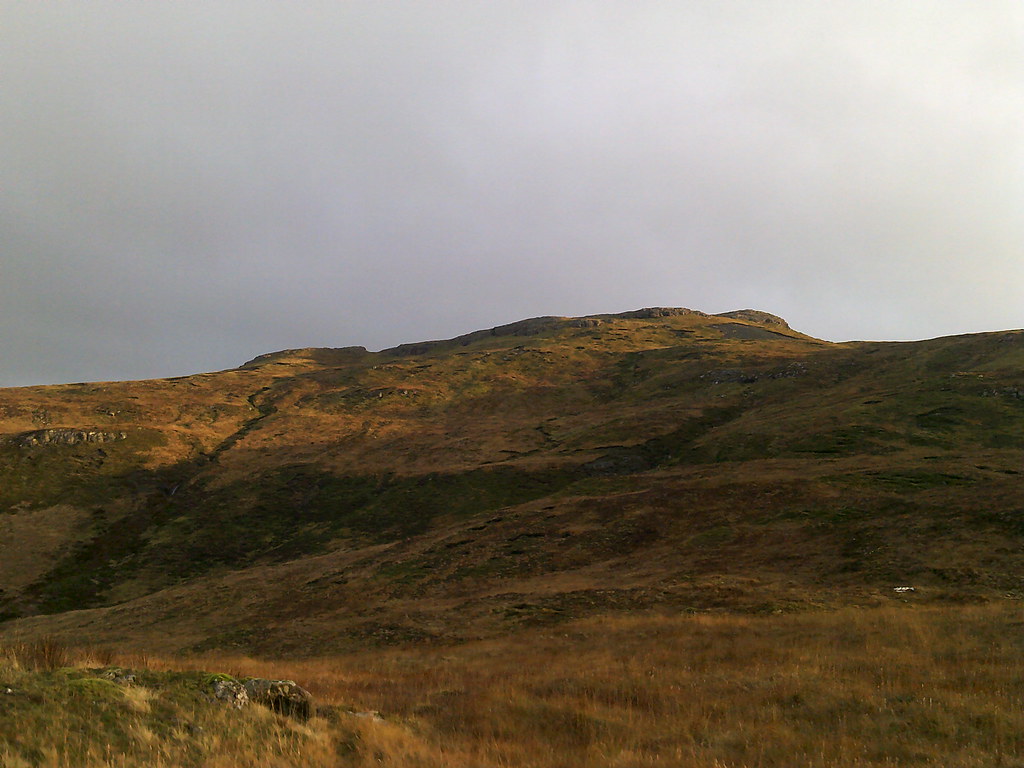 Looking back to Beinn na Drise 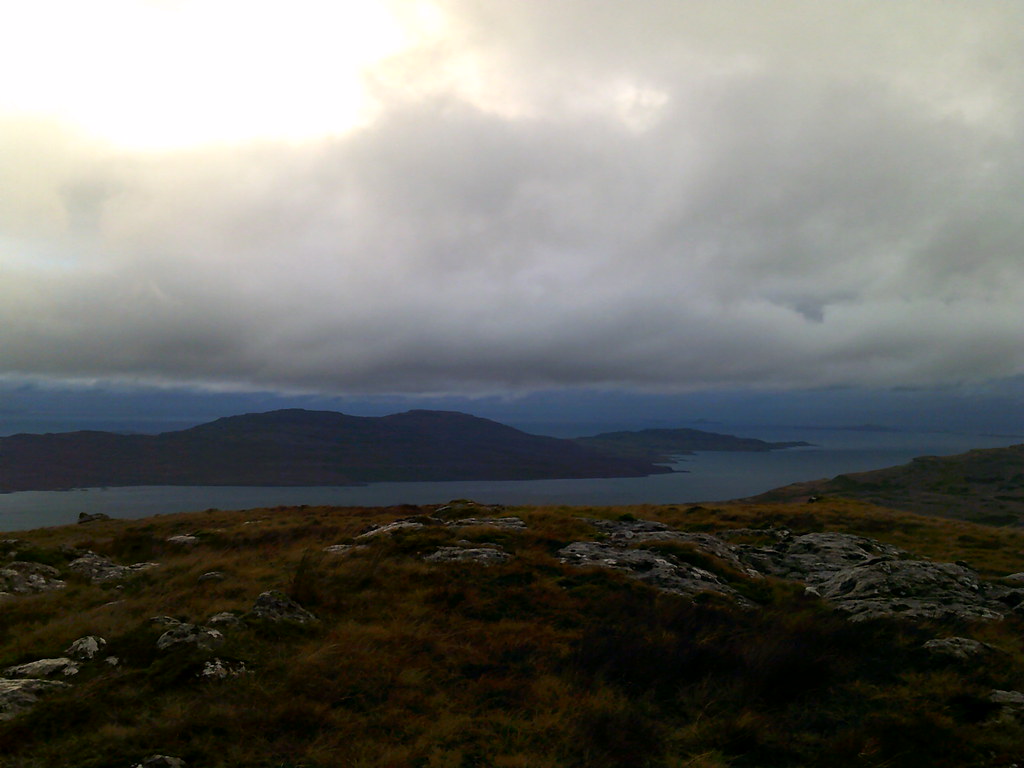 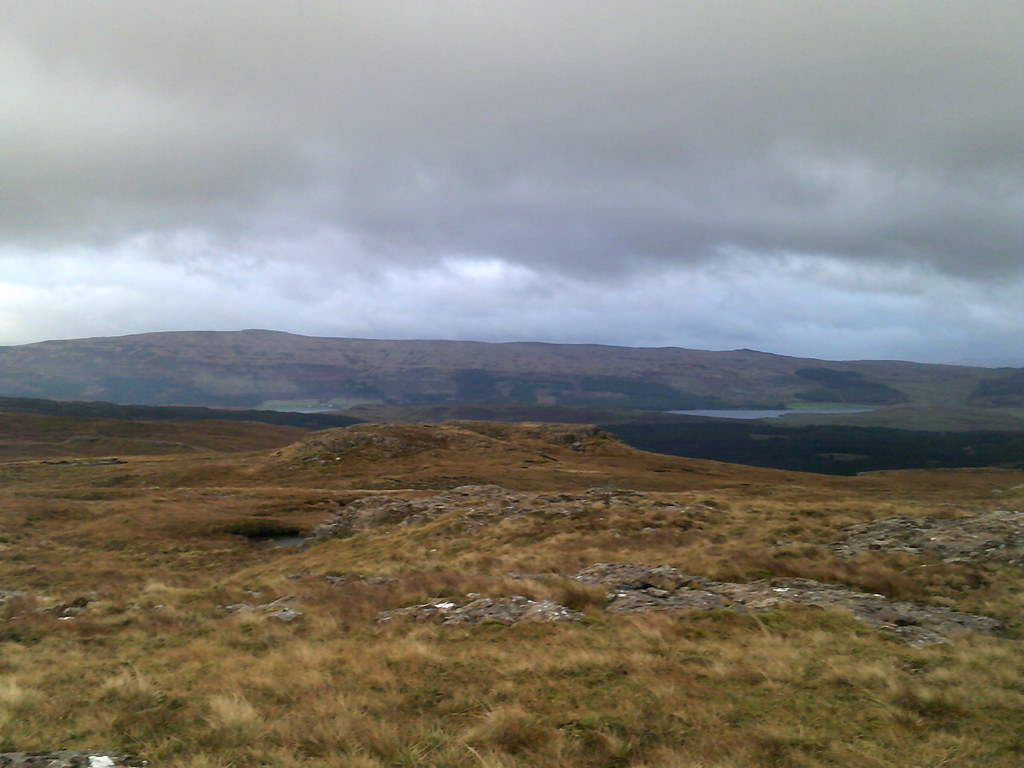 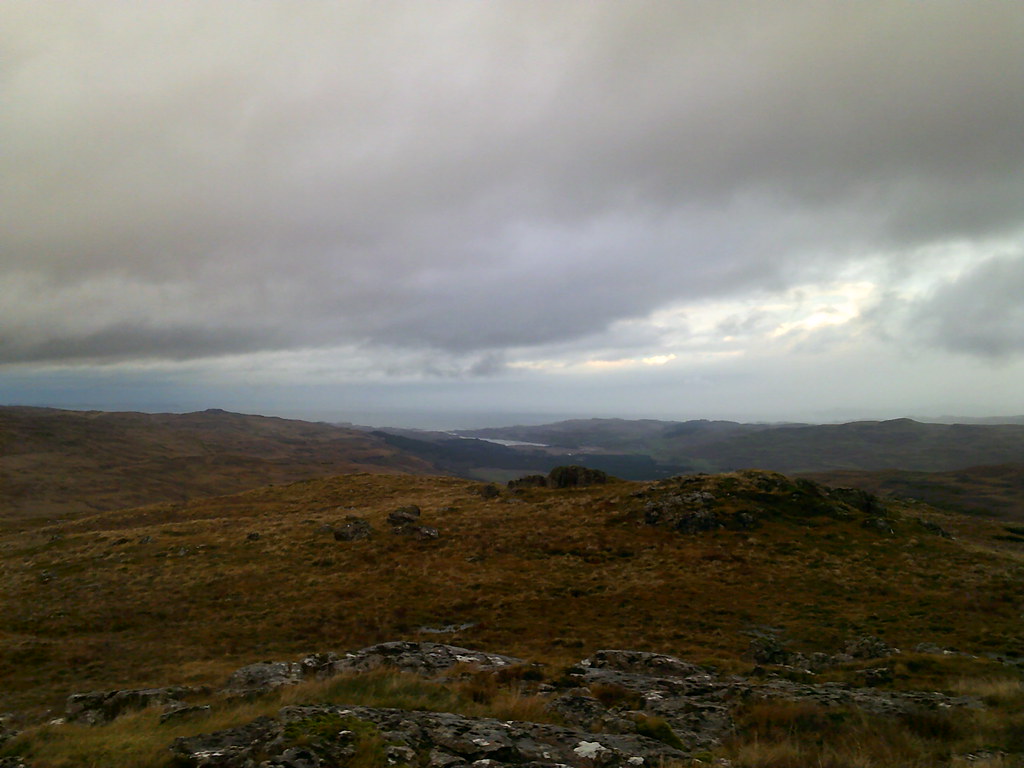 Dervaig from Cnoc an Da Chinn 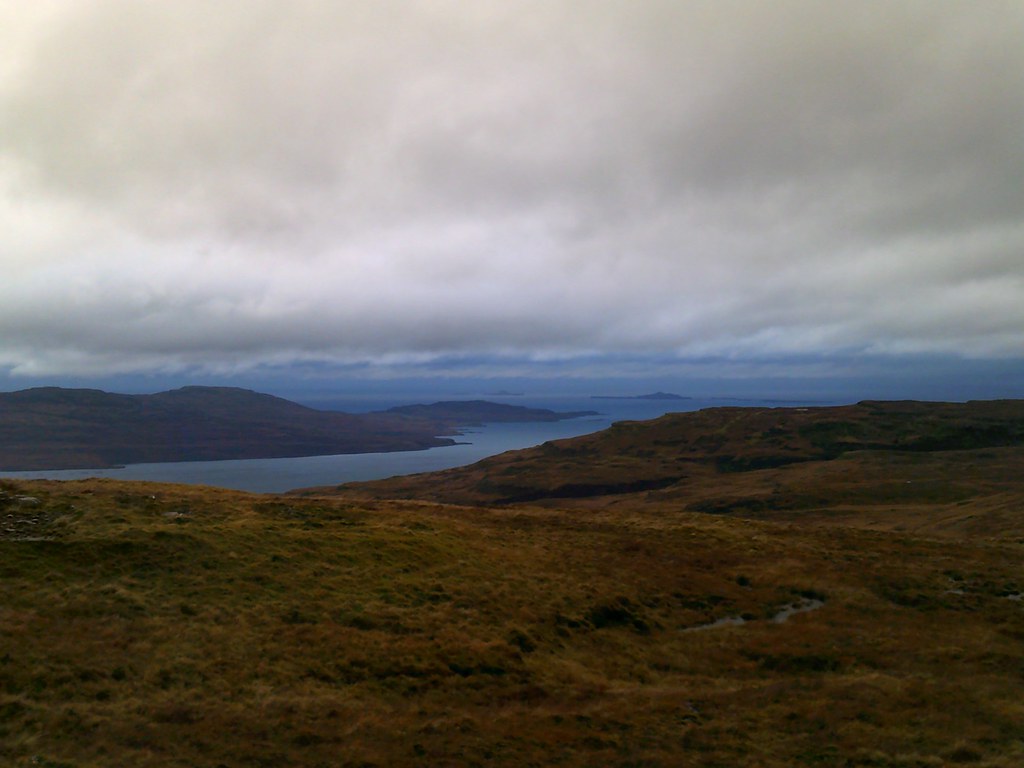 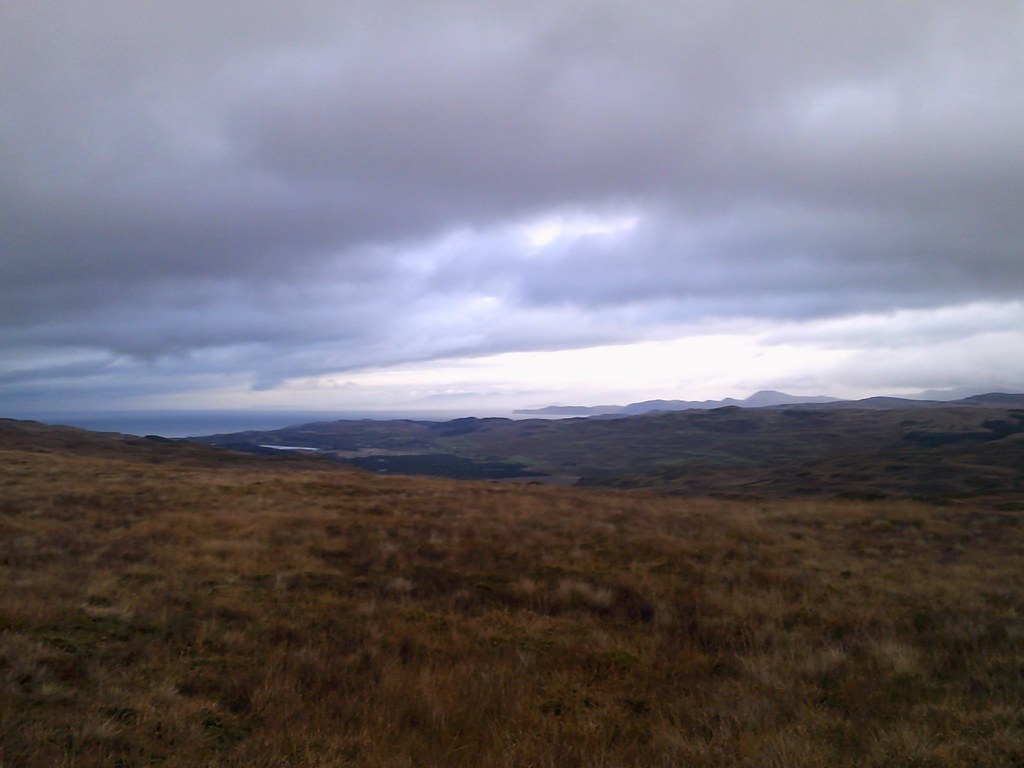 Last light and a glimpse of Rum and Ardnamurchan

By the time I reached Beinn nan Clach Corra (I wasn't originally sure if I would go this far), the light was all but gone and it was a stumbling 15 minutes down to the Dervaig road to the west in what was left of it. I was offered a lift within 5 minutes of reaching this but I declined - it was a pleasant walk back to Kilninian with the headtorch. Given more time I might have carried on to Carn Mor and dropped directly down behind the cottage, but this would have just been pointless stumbling in the dark. Once back, I had the fire lit in no time. 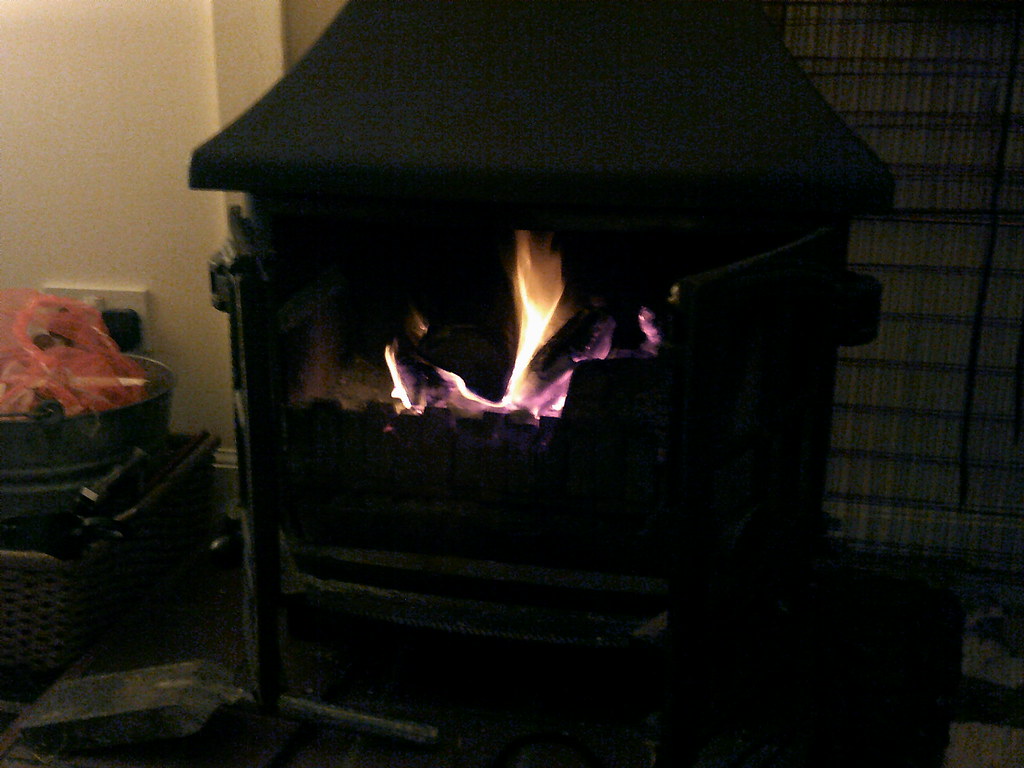 Not quite a bothy but it will do...

Not the longer walk I had in mind (if Jackie had been less able to get out and about and the weather better I might have nipped up Ben More one morning), but perfectly enjoyable despite that.