I've not been up Glen Affric for a couple of years, despite it being on my doorstep, so a short autumn visit beckoned. I quite fancied another round of Sgurr na Lapaich, Mam Sodhail and Carn Eighe, but with the weather looking poor on the high summits, I opted for a long bike ride and short Marilyn instead. I was on my way through Inverness shortly after 9am, and decided to hit the river and canal early on.

cannich.gpx Open full screen  NB: Walkhighlands is not responsible for the accuracy of gpx files in users posts
Weir on the River Ness at Holm Mill: 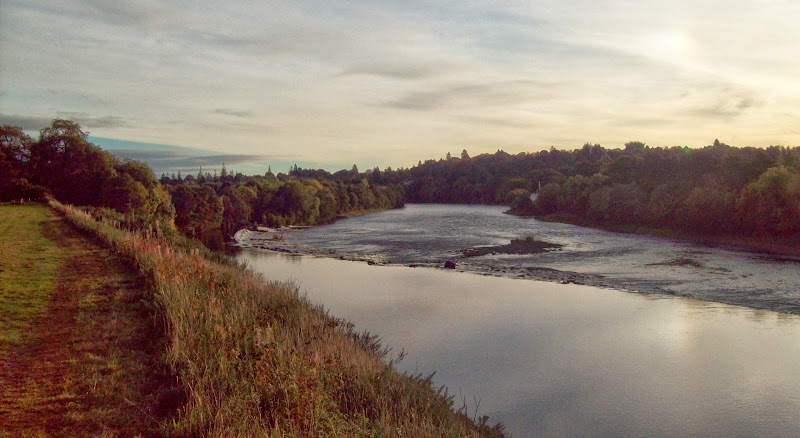 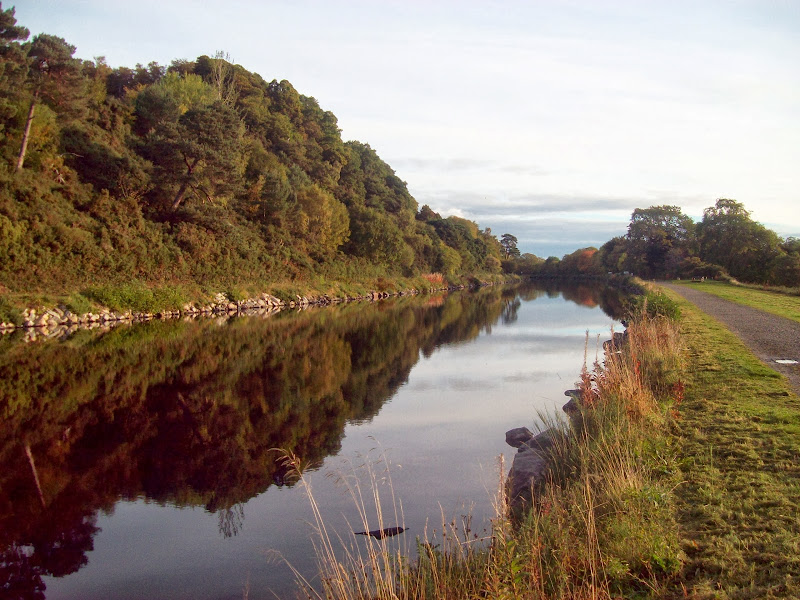 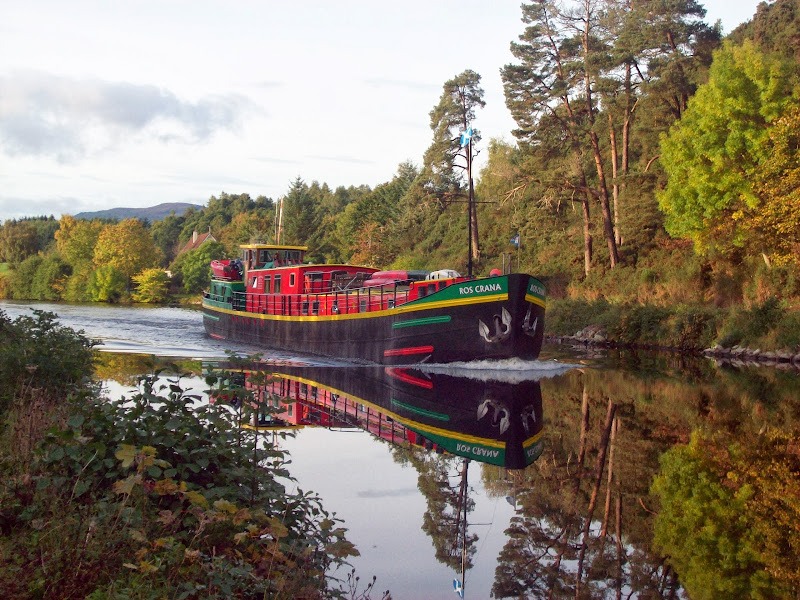 The canal towpath cuts out the first few miles of A82, and has a nice secluded feel even close to town. After that you just have to suck it up and cycle on the main road (there are some offroad alternatives but they take much more time and effort). Fortunately I'd timed it well, and the road was quiet with most of the traffic heading into Inverness. Before too long, I was turning off into Glen Urquhart and the quieter road to Cannich. I stopped off at the church by Loch Meiklie for a second breakfast and some views of the loch (which is hard to see from the road). 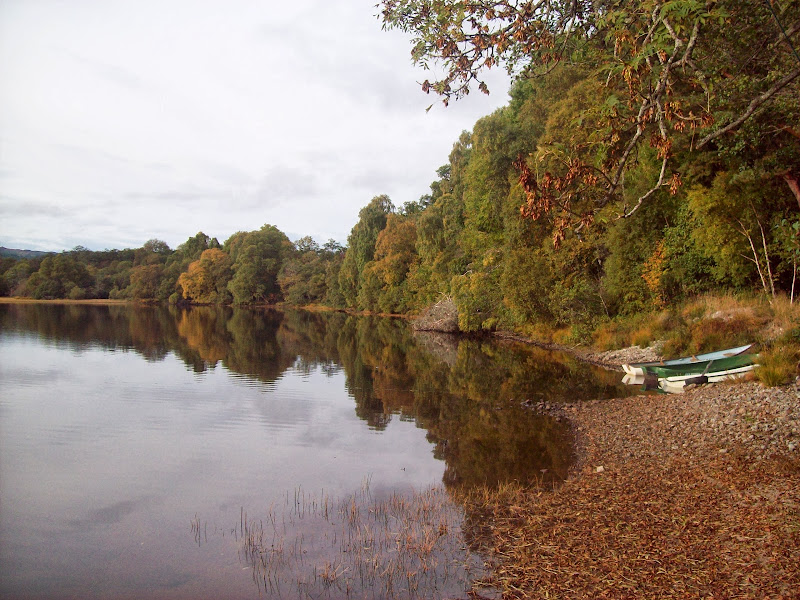 A bit of gradual ascent took me under the new Beauly - Denny powerline and down a nice big hill towards Cannich. I was plunged into mist here. It was fairly short lived, and I took a left just before Cannich to follow the east bank of the Affric to Fasnakyle power station. The climb up to Glen Affric wasn't as bad as I was expecting - a fairly reasonable gradient - and I was soon at the Dog Falls. 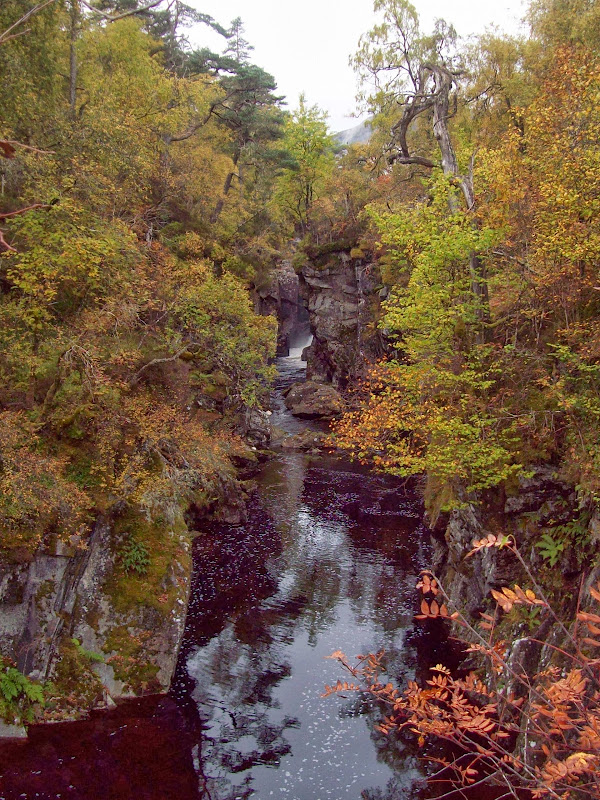 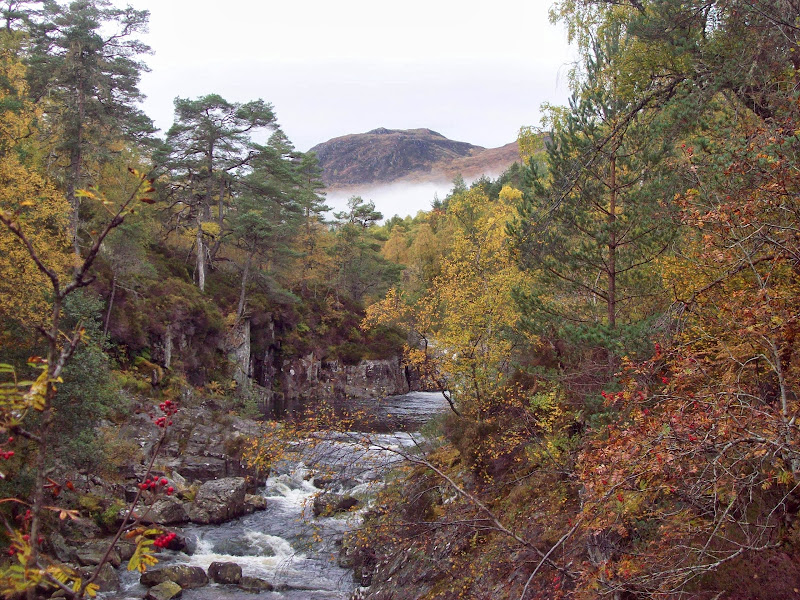 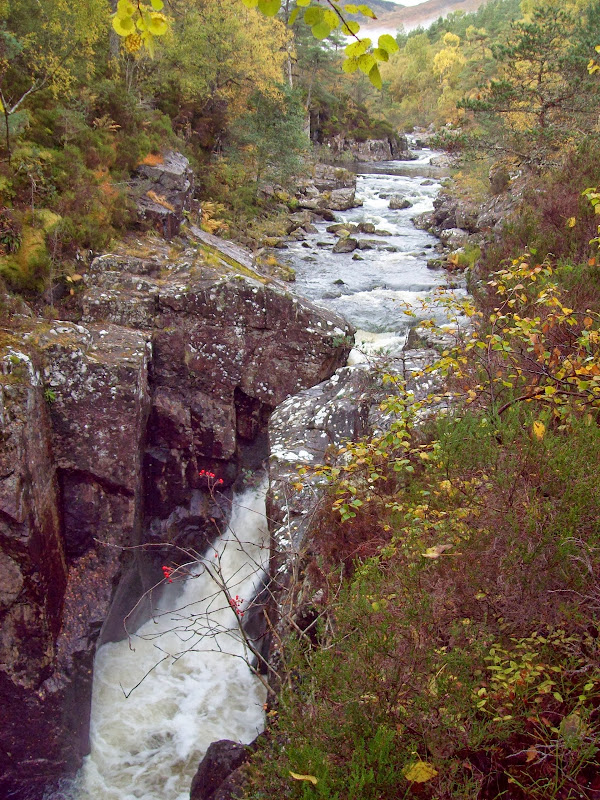 The route onward went up a steepish forestry track. In fact this wasn't too bad either (and well surfaced too), however I remember Gill giving me an earbashing some time back for making her cycle up it as part of a circuit of Loch Bheinn a' Mheadhoin (I had promised a nice flat bike ride). For people who don't fancy crashing through trees and don't feel the need to bag Marilyns, there is a decent viewpoint down the loch to upper Glen Affric here. 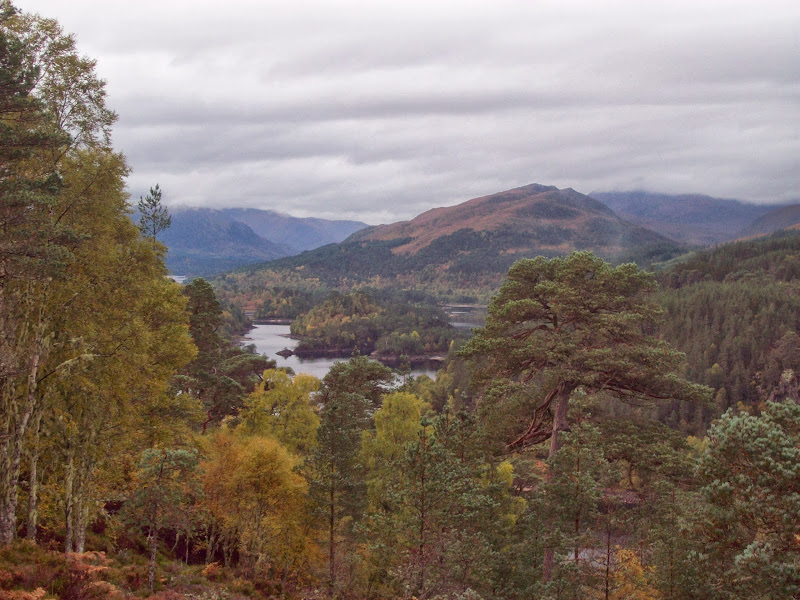 I left my bike here and headed into the woods. The undergrowth is pretty lush and attractive to look at here, but makes for hard walking! A steeper section led to the tree-line, which was very close to the summit. Surprisingly I met a couple here (plenty of people on the forestry trails but that was less surprising). We had a quick chat about the views and the weather then I moved onto the summit. 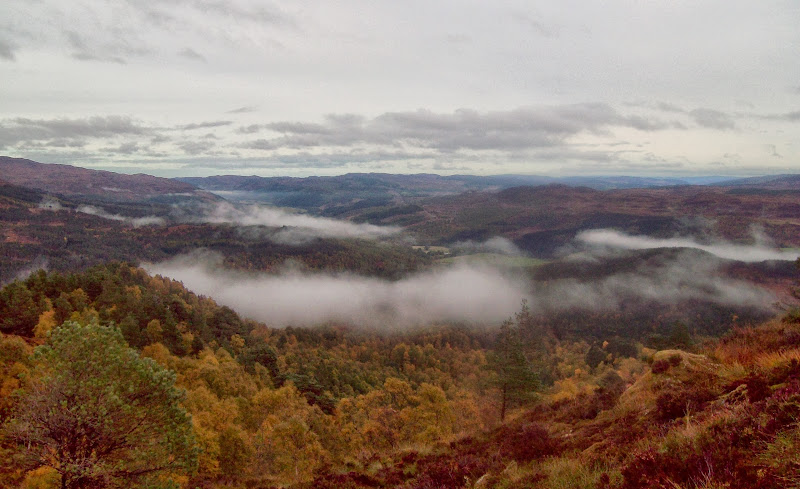 Loch Bheinn a’ Mheadhoin and Glen Affric from Carn Fiaclach: 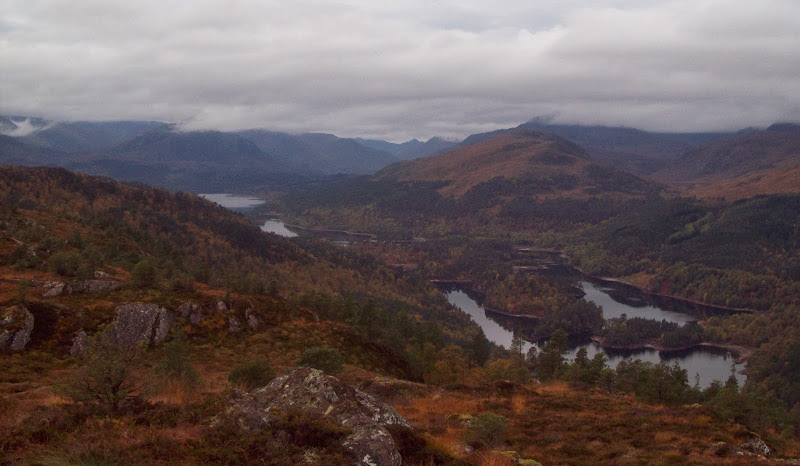 This was clearly marked with a survey post (presumably from when the Loch Bheinn a' Mheadhoin dam was built) and had nice views over the loch. The high Glen Affric hills would probably have looked good too, but they were
shrouded in mist. What I could see was pretty atmospheric though, and looked much better in reality than in the photos. There was a slight chill in the air but no wind, so it made a lovely place for lunch. 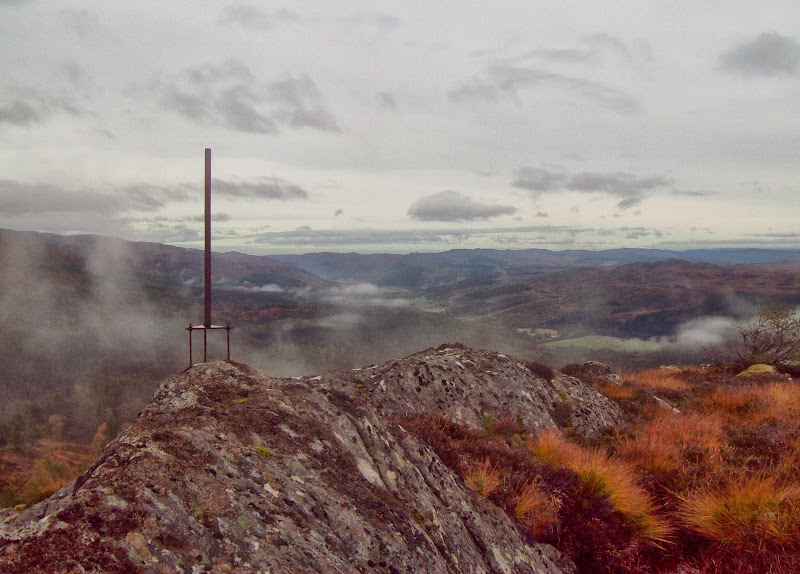 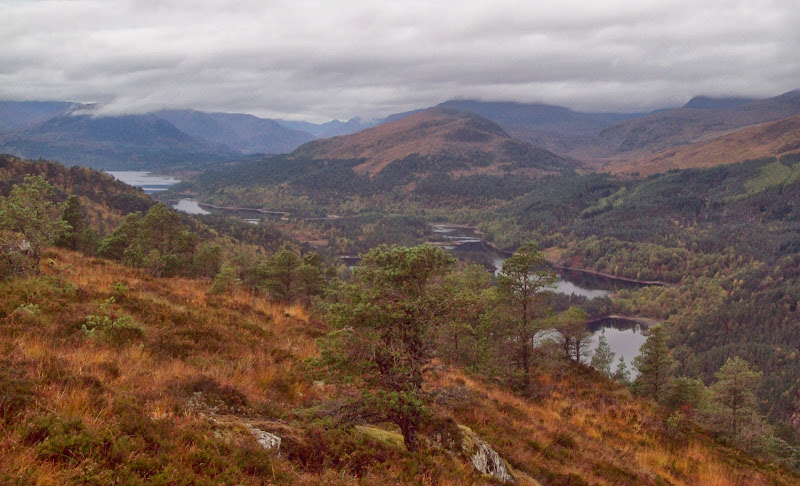 No paths up here, so it was just a case of crashing back down through the trees. I nearly fell over a few times as the way was steep and slippy. There was barely 40 minutes of walking in the day! 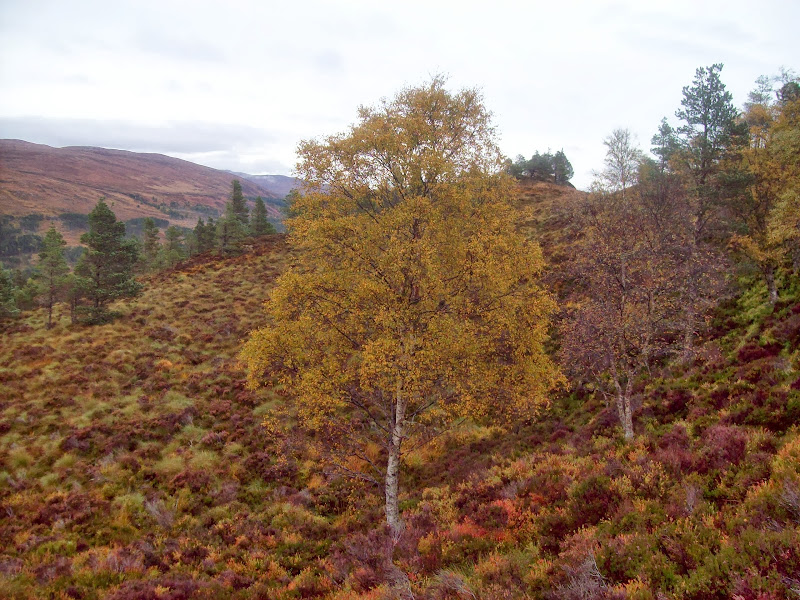 Back at the bike I was briefly tempted by a circuit of Loch Bheinn a' Mheadhoin, but I decided that the day would be long enough without. Theoretically, I was supposed to be using my time off to do house-moving chores rather than messing around outdoors

. I also had to call in at work to finish some stuff off, so it didn't pay to be too late back in Inverness.

Loads of lovely downhill to Cannich, where the Slater's Arms looked a bit more welcoming than it had on my last visit. I stuck to the main road back down Strathglass at first, as it was barely any busier than the minor road on the other side of the glen. Nice easy riding on almost flat roads led me to Struy, where I crossed the river, as there was a shortcut through Kiltarlity. I enjoy cycling around these roads almost as much as walking. 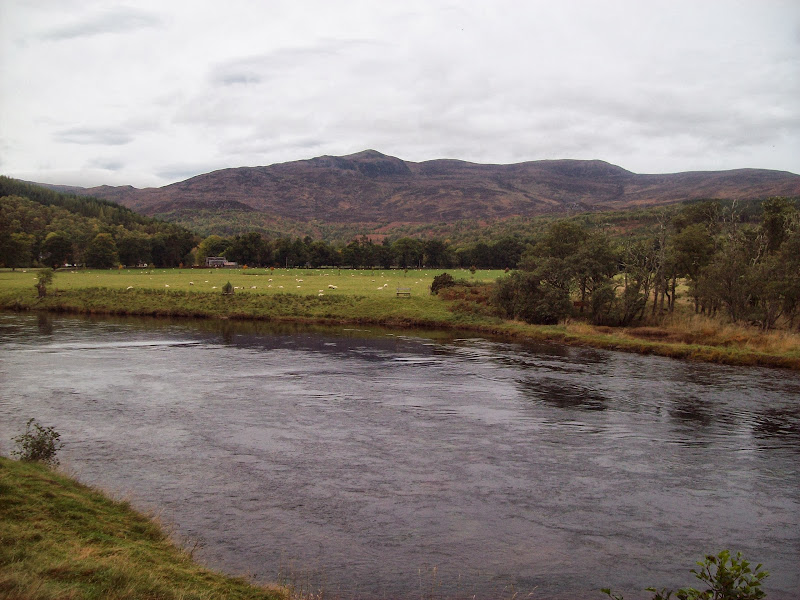 Then it was onto the busier Beauly road for the last 10 miles back to Inverness, where I was passed by a few lycra-clad types going twice my speed. Back in Inverness for 3:30pm - a satisfying day (which will probably be repeated for Creag Dubh at some point).

Enjoyed reading this very much having been in that area recently, as you know

Some lovely photos, Malcolm, and glad you managed to get out to Glen Affric

Thanks Susan. A visit partly inspired by your report. Shame I didn't quite get the weather you had.

Some lovely photos of an area I've not spent much time in.

I cycled that route from Killin few backs finishing off going downhill from Lawers. The hill was a killer over to Lyon!!
I really should've done that Corbett too

malky_c wrote:For people who don't fancy crashing through trees and don't feel the need to bag Marilyns, there is a decent viewpoint down the loch to upper Glen Affric here.

Yes, there is a viewpoint but the view from the top of Càrn Fiaclach is much, much better.