Tough round in tough conditions

Tough round in tough conditions


Another weekend, more Donald's on the menu. This time it was a planned outing that we were intending to tackle a couple of weeks until Parminder became unavailable due to Covid. He hasn't contracted Covid but had been in the company of someone who tested positive - so as a safety measure he took the usual tests and stayed indoors.
The route I suggested was to tackle the 4 hills from the south, last time I was here about 5 years ago I approached the last 3 from Loch Trool.
We arranged to meet Parminder at Straiton park and ride and then head SW down the A702.
I had chatted to Tommy on Whatsapp and told him we would be at Auchinleck at about 8am, as it turned out we didn't arrive until shortly after 9am. We were all equipped with head torches as I knew the walk be about 7hours and as we near the shortest day, daylight is becoming a problem. As it turned out we arrived back at the cars about 15 mins before it started to get dark.

The car park at Auchinleck, enough room for 4 vehicles

The way ahead, a couple of Km's on a good road/track

Hills looming on the horizon

Looking back, the blurry dog is Tommy's - Max who was obviously pleased to be out on the hills, he must have covered 3 times the distance we did

Still a track but not quite the same quality

The undergrowth, one of the easier off piste experiences

George opting for a different part of the wall

We are heading up to the fence, then turning left following an ATV track

We were initially heading for the slight dip on the horizon

Welcome to the smaller hills terrain, the wind was right in our faces

George sheltering behind Tommy, almost getting a piggy back

Black Cairn not far from the summit of Drigmorn Hill 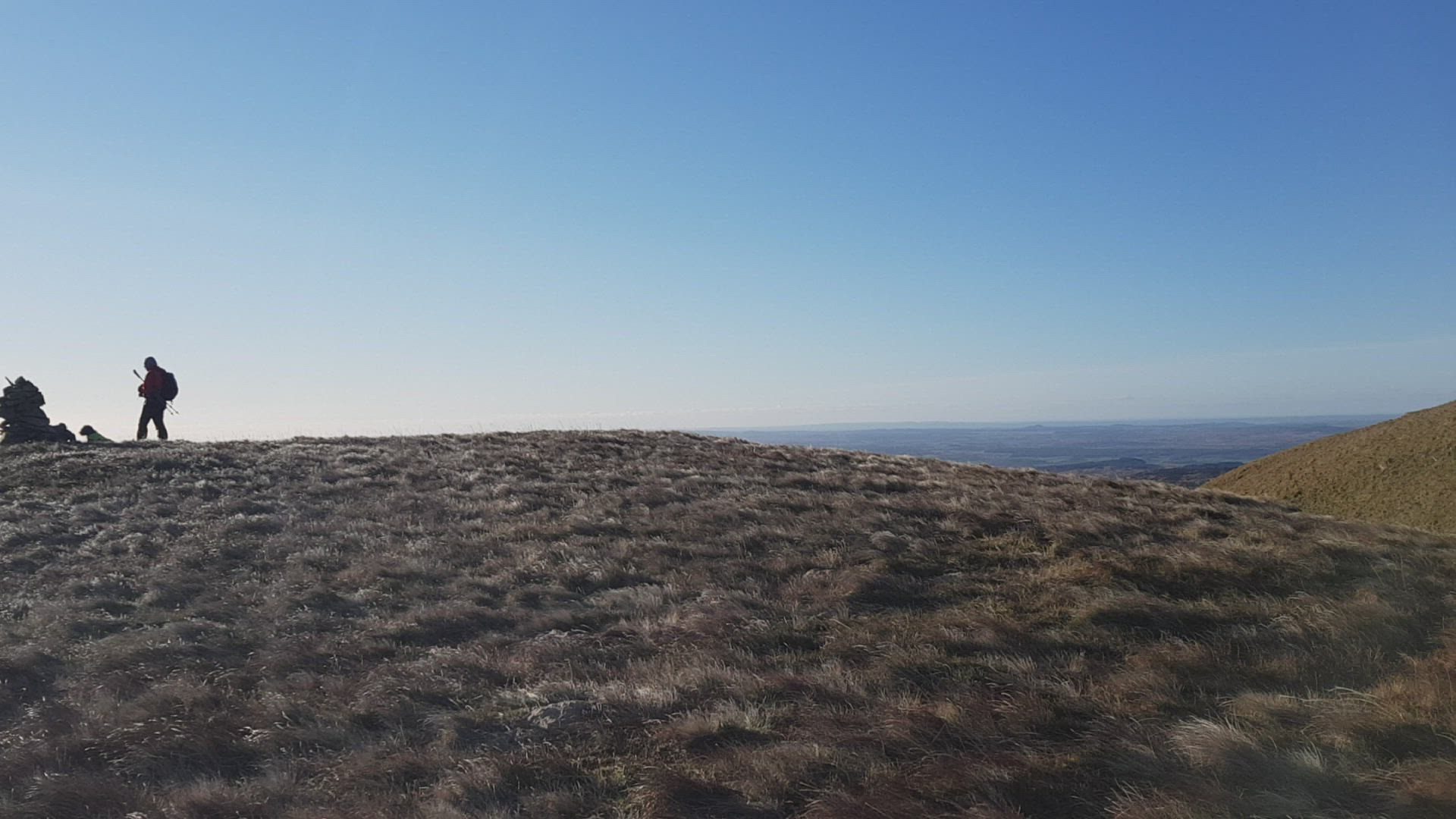 A video I took at just over 500m, it will give you an idea of how brutal the wind was. Apologies for the end of the video pointing at the ground, I thought I was about to lose my hat

Our first view of Curleywee, with Lamachan to the left

Panning a bit further left, the one thing we can't see from here is the drop between the hills

Looking SW, Drigmorn Hill and the Solway Firth in the distance

George and Parminder taking a breather. One thing I should point out, George very rarely wears any headgear and he would have his beanie on soon as well

Curleywee on the right just peeking out, the other 2 hills along the ridge

The way ahead to Millfore

Looking north, Merrick on the left with a slight dusting, the hills on the right are Corserine and the Rhinns of Kell also with a dusting

Not far from Millfore, looking across to Curleywee and the rest of our route

On our way to Curleywee, what we can't see is the drop that lies in wait

The same lochan close up

Not sure what this used to be, certainly not very big

More descending, after a huddle we opted to head left to try and retain a bit of the height we had struggled to gain. the height of the terrain at the foot of Curleywee is about 350m so that means losing well over 300m

Curleywee, we are heading left and would ascend it up the easier shoulder to the left

Traversing trying to keep the height

Having reached the wall, we found a faint path uphill, we would be heading uphill to the right

Looking down on George and Parminder

Angle of ascent looking across to Larg Hill

Loch Dee to the NE from Curleywee

The way ahead to Lamachan Hill

Looking back to Curleywee and the undulations

Nice broad ridge, with a path

Looking west, zoom in and you will see Ailsa Craig on the right

West again with Ailsa Craig in the middle on the horizon

Marching downhill, our start point is behind Parminder

Once at the foot of the descent we crossed a forestry track and headed downhill utilising a firebreak. The underfoot conditions were rather soggy

Still heading down in the fire break

We reached the track that would take us back to the car park and came across a victim of Storm Arwen, as well as 4 trail bikers that we saw earlier. They were struggling to get there bikes round the fallen tree

You can see why it was a struggle the bikes, Tommy saved them by using his dog lead to pull up the bikes from the front having put the lead round the front forks

Another action shot. We had to laugh as the guys were local and asked what the hills were called that we had been up and also asked where the track would take them - we were more than happy to assist

Parminder leading the way for Max

The track back to the car park

This turned out to be a really tough shift, we were very surprised when we looked at the scores on the doors when we got back to the cars. The ascent figures seemed to be far less than we felt, George had an extra 400m on his GPS but we have been doubting that for quite a while. Tommy had very similar stats as me, having said that we are both using Viewranger. The obvious standout hill has to be Curleywee which looks quite impressive from all directions.
Next week I will be flying solo as both my colleagues are unavailable, so I will probably tackle a local hill to keep the legs moving.

Re: Tough round in tough conditions

A great report, thanks for sharing.
I did this round 25 years ago, and they are lovely hills.

Re: Tough round in tough conditions