I set off early from Cannich down the scenic but in places, badly pot-holed Glen Affric road, reached the large car park at the end and debated whether to use the bike for the first 3km. In the end I decided to walk in - but in hindsight it would have saved at least 30 minutes walking in total as the track was good for riding. As I walked down to the bridge over the River Affric I suddenly couldn't remember locking the car, so returned and yes, I hadn't!
Take two: back to the bridge and then along the track, past the impressively large Affric Lodge complex of buildings on the far side of the river and to the signpost off to the left for Cougie. The path meandered at a distance from the Allt Garbh burn and was quite boggy in places, despite the dry summer. After a while, the path started heading east and soon reached a wide estate track where I turned right and headed SW, through a few large gates and then alongside the Allt Garbh again.
On reaching a bridge the track ran out so I continued on rough heather and grass along the burn for a bit then veered left heading for the NE shoulder of Aonach Shasuinn. Traversing over rough ground, I gradually gained height until it was decision time : head SE up to the bealach east of the hill or continue up steepish slopes to the west of the summit and approach the top from there. I settled on the latter as it looked much shorter albeit fairly steep. Indeed it was pretty steep and I was glad to emerge on the summit plateau and reach the summit cairn. It was 10:50 and had taken just under 3 hours from the car. 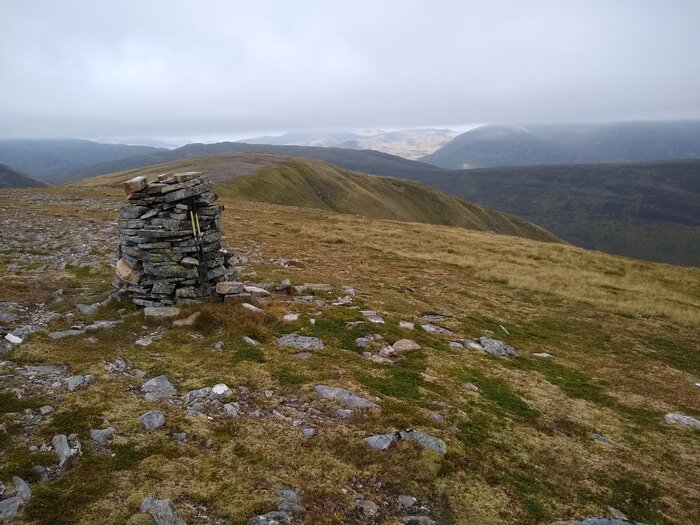 Most of the higher hills around were capped in cloud but Aonach Shasuinn was, to my relief, clear. After a short rest I set off westwards, taking in the west top, then dropped steeply down to the Bealach an Amais. The sky was at last beginning to brighten as I headed up the narrow ridge of An Elric where I got a good view of the route ahead and round to the second hill. The Munro of Sail Chaorainn and Munro Top of Tigh Mor na Seilge were just off to the left - I had been on those two back in May 2002 when climbing the Munros north of Lundie on the shores of Loch Cluanie. The views were opening up to the Munros to the south and west as I carried on westwards - the Munro Top, A' Chioch in front of a cloud-capped A' Chralaig looked particularly impressive. 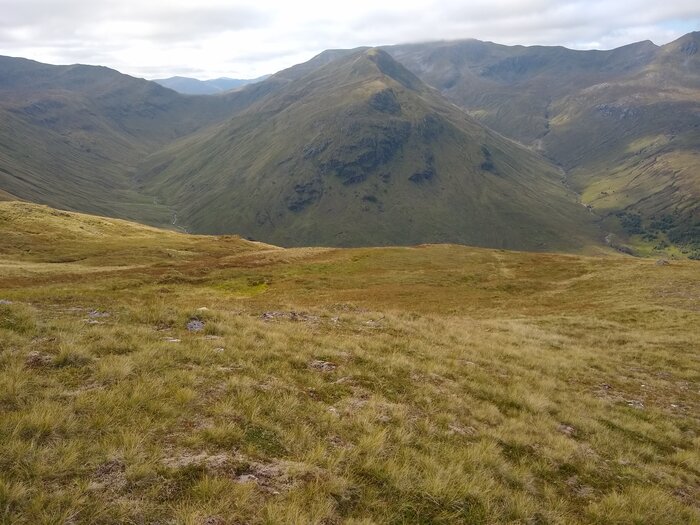 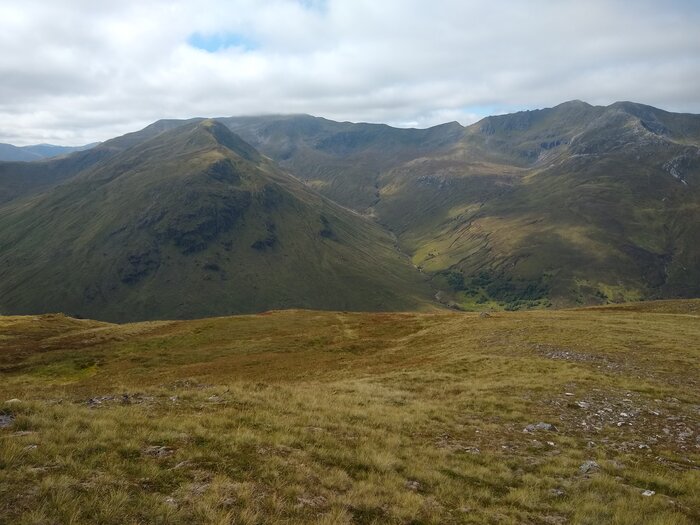 I thought briefly about detouring off my intended route and climbing Tigh Mor na Seilge as it looked tantalisingly close, but then I thought I may then be tempted to continue on to Sàil Chaorainn or even to Sgurr nan Conbhairean as there's only 80m drop between the last two. I still had a long way to go, so put such thoughts aside and continued instead on a westerly bearing, past Loch a' Chòinich on the left and then descended easy slopes to the bealach SW of Carn a' Choire Ghairbh. A short pull up alongside an old deer fence led to a large cairn and a short distance further I reached the summit cairn atop a small rocky ridge. There was plenty of blue sky now and the cloud had lifted off all the surrounding peaks, most of them Munros that I had previously climbed. 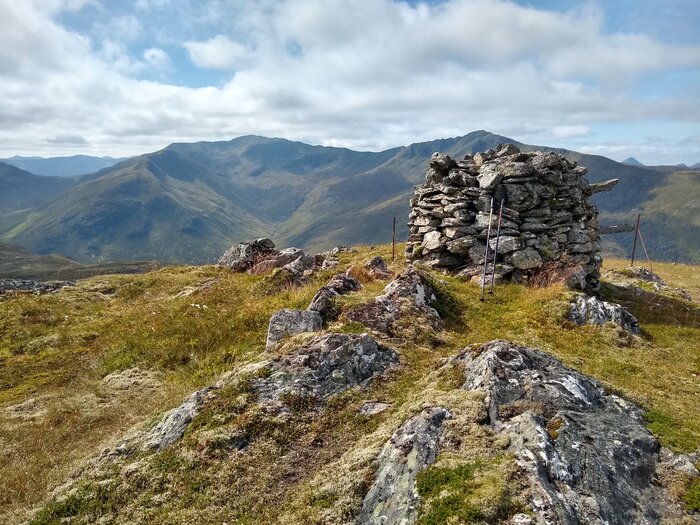 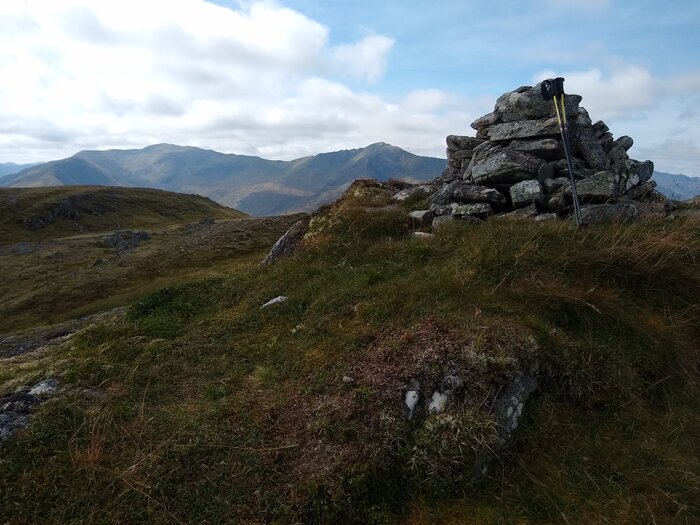 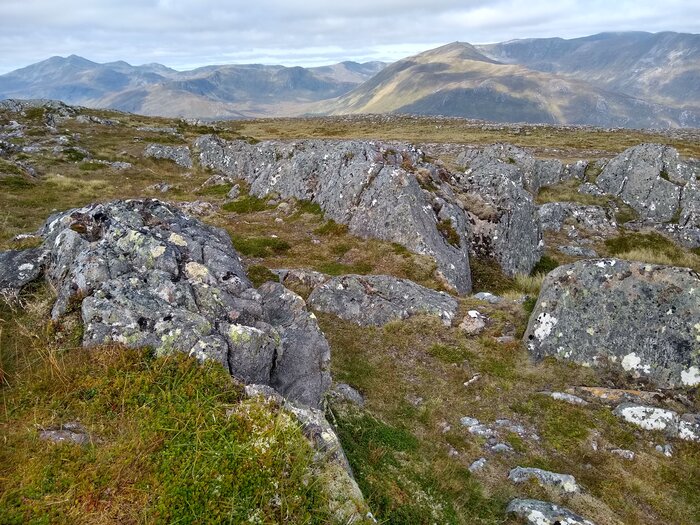 View to north from Carn a' Choire Ghairbh

I enjoyed a leisurely lunch then set off down the NE ridge. I had three choices for the way down:-
a) a steep and hard to find stalker's path down to Loch Affric
b) a return down to the Allt Garbh and back the same way in
c) continue NE down to the forest and back on the west bank of the Allt Garbh (which is, coincidentally, the WH route but in reverse )
Aesthetically, I always prefer a circular route if it makes sense, so I chose option c, although at the time I had no inkling of the difficulties it would present! The going was good as I made my way on grass tracks to the intermediate peak, Carn Glas Lochdarach and then, peering down the steep northern flanks, I looked for a way ahead to get down to the forest. With difficulty I scrambled down steep slopes covered in thick vegetation and large rocks and reached a deer fence. I had to cross this at some point so headed further along until I found a corner and clambered precariously over the 2m high wire fence. 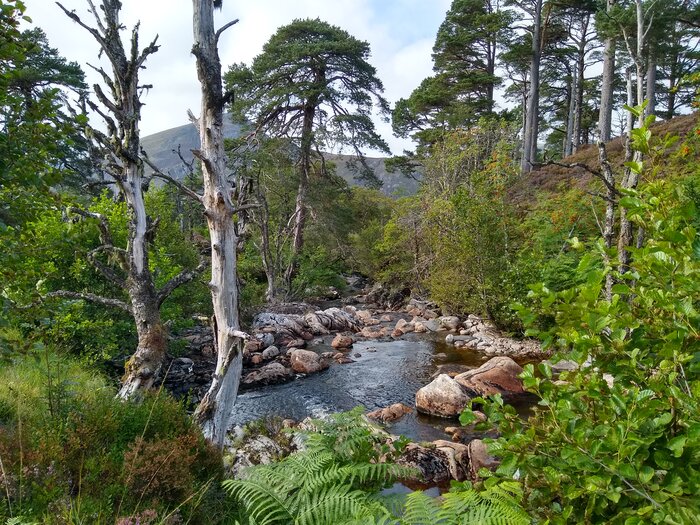 Back into the pine forest

I was now heading down along a faint overgrown path, ducking under branches and over piles of vegetation. I was now opposite to where I had walked in but there was no way of crossing over to it - a stream and more fences! So I continued heading through thick heather and bracken, hoping to eventually find a path, however none appeared, until with much relief I staggered out onto the main footpath up Glen Affric. It was now just a 3km walk back to the car, which I reached at 5:30pm (I was now wishing I'd used the bike to that point!). 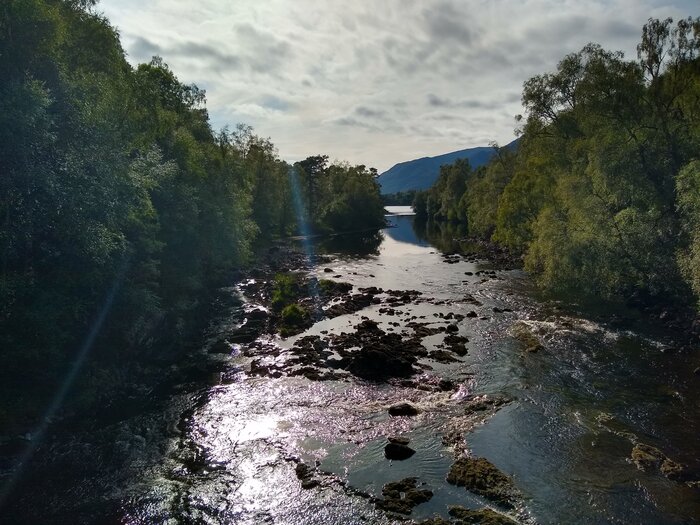 View from bridge shortly before the car park

A memorable day overall but on hindsight my choice of descent route was sub-optimal!

Re: Aonach Shasuinn and Carn a' Choire Ghairbh

Enjoyed your report, it's a timely nudge for me; I've still to do AS, am hoping to do it on a cold clear day in the next few weeks so I get the benefits of easy parking in the quiet months, frozen bog and good views!

Re: Aonach Shasuinn and Carn a' Choire Ghairbh

I've had a plan in place now for some months now to attack these two from the south. Need to find my mojo though before I'm ready for a walk of this length......one for the longer summer days I think.