On reading the bold warning on Walkhighlands about the number of trees down and the road being blocked from the other side, we decided to choose this route. It was fabulous and meant we were in the sunshine for most of it.

It was much quieter this side and driving up past the lodge the storm damage from Arwen is obvious as the lodge itself had taken a bit of a skelp, though could have been a lot worse judging by the van sitting in their yard which was crushed under a giant pine. Just past here, the road forks left down to the farm and we parked up into a space just to the left of the gate at the right fork. Not much room here for more than one car but there was a bigger space back down before you get to the lodge.

Walk down the left fork past the (incredibly tidy) farm. Even the dog kennels were immaculate. After about 400m there is another fork, this time take the right one up the side of the forest. You can't really go wrong here and a fit mountain biker or an e-bike would take you up here in no time. There aren't even any potholes in the road. 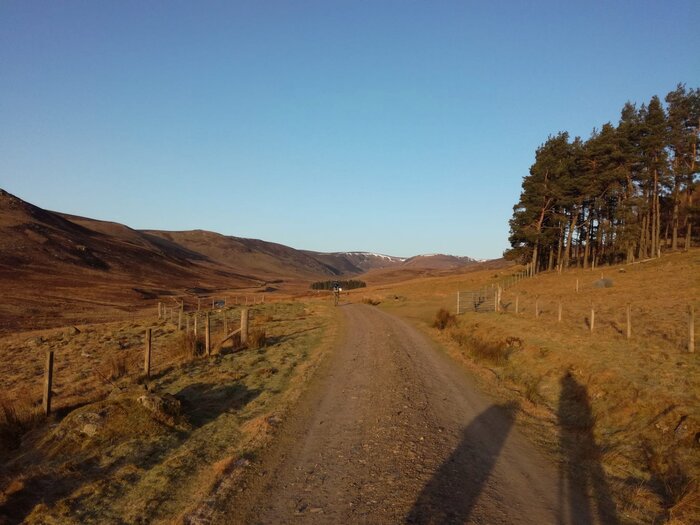 The road ahead at the start

After not too much effort we came out on top of Lick Hill then the path climbs slightly steeper to Dreish. Saw a couple of mountain hares in their winter coats but they zoomed off before I could get a pic! 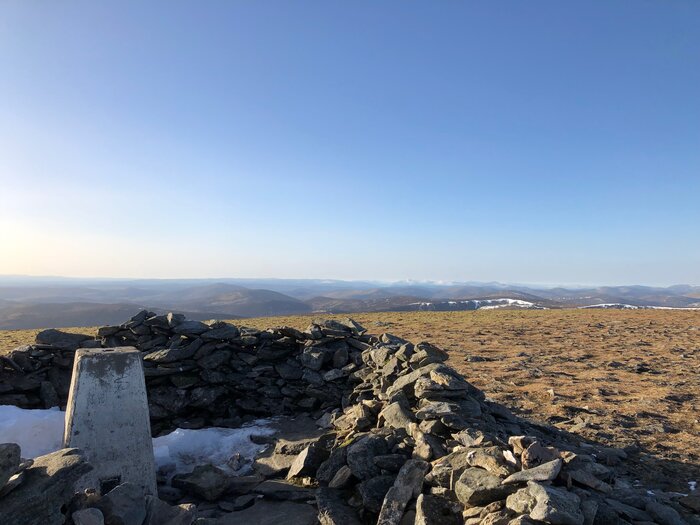 The weather was glorious and the forecast slightly wrong in that there was little wind so just a tad chilly rather than a minus 8C windchill. Nonetheless we didnae hing aboot and headed off Dreish towards Mayar, descending quite steeply but on an obvious path. 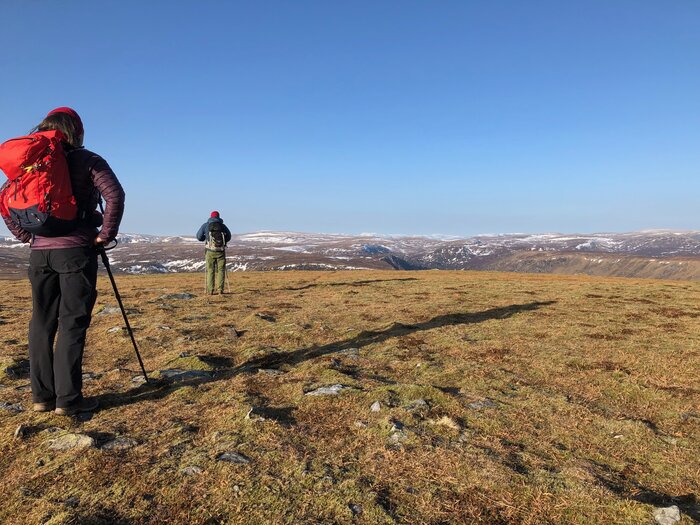 Watch out for another sheep path heading off to the right, this isn't the one you want. Didn't appreciate how precipitous it was to the right off the path until we reached the bealach. We climbed up to some prominent rocks to find the perfect picnic spot, in the sun, out the wind. 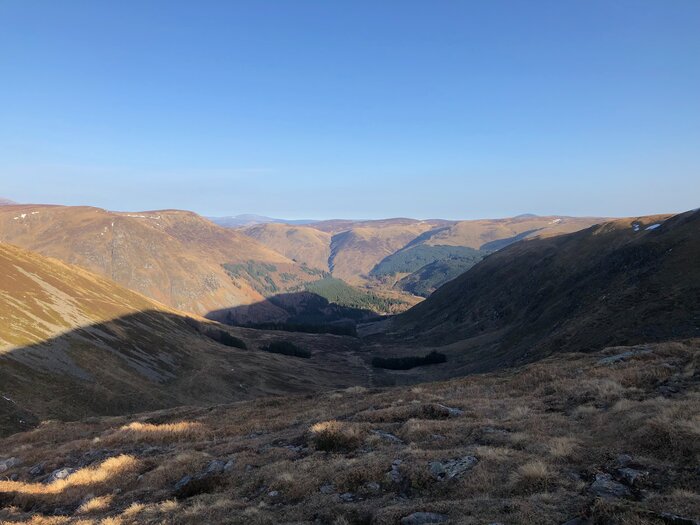 Looking down into Glen Doll

Scoffed our pieces admiring the views and then pressed on noting the Kilbo path off to our left which was our return route. But first a quick ascent of Mayar to find a couple of other walkers who'd come up from Glen Doll and said it wasn't too bad circumnavigating fallen trees. 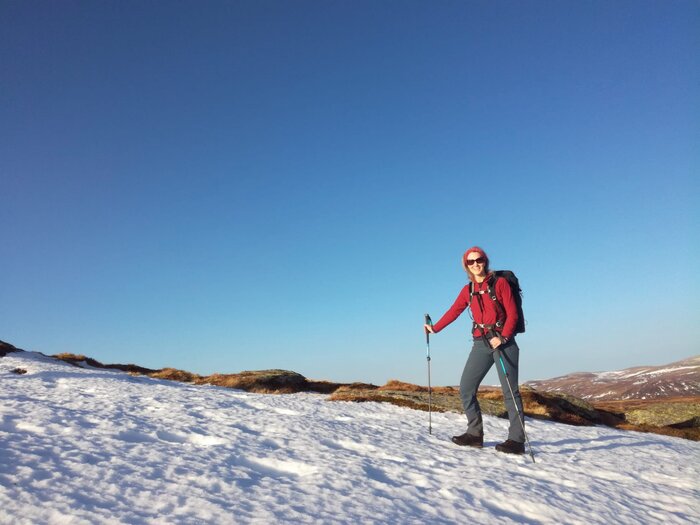 Me on the only sizeable bit of snow (easily avoided) 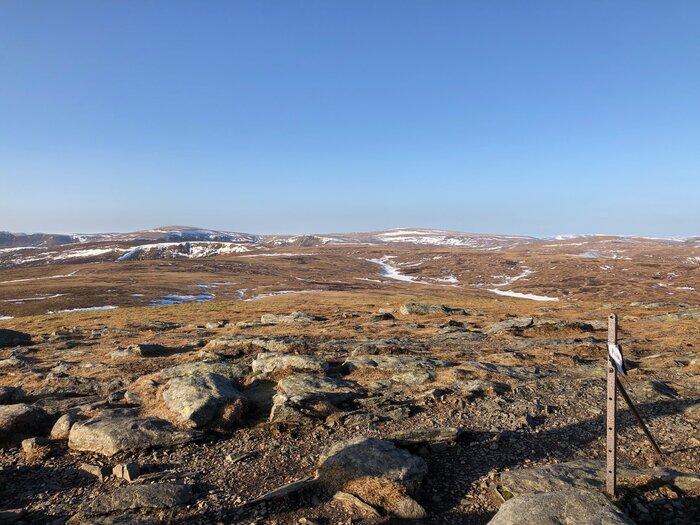 Not much snow but ground frozen

After a quick blether we retraced our steps back to the start of the Kilbo path and had an easy descent all the way to the bothy. Previous reports state that there was a forest here which was very muddy underfoot but it has since been felled and there was proper track most of the way. 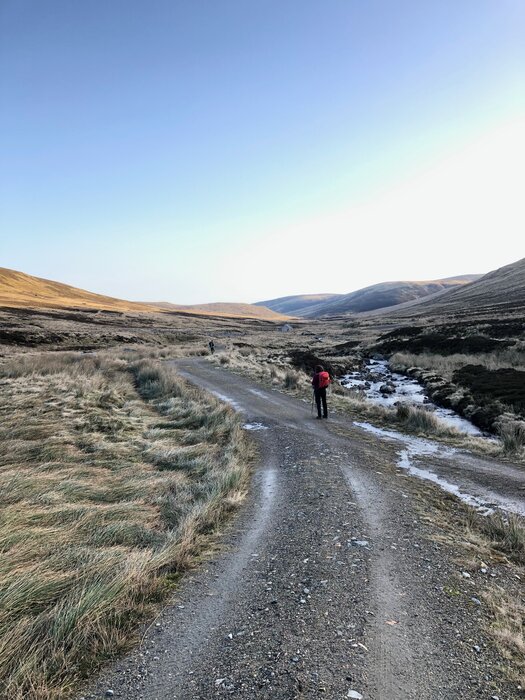 The long but easy road back, bothy in the distance

Didn't bother fording the river to take a better look but it's been done up nicely though looked very locked up. I think it's just used for private shooting parties on the estate. 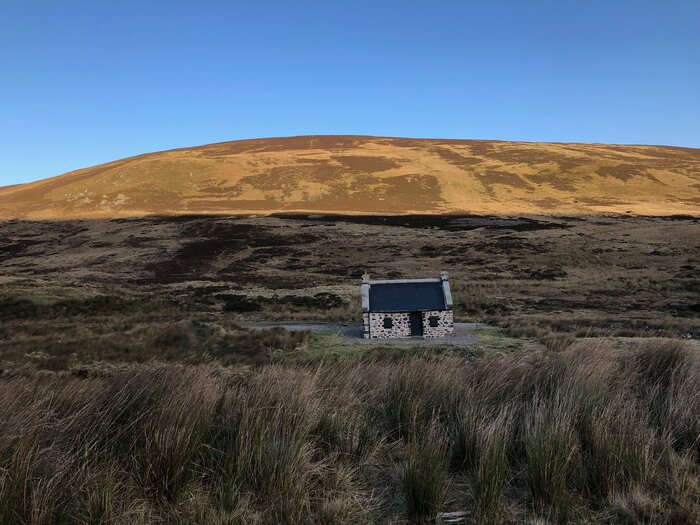 Cross the bridge and it's an easy hike back to the car.

A wonderful, easy way of getting these two. Not so pretty as Corrie Fee but we enjoyed the peace and quiet.

The rollings uplands look good for ski touring, if there was any snow.

Yes it would be braw for ski touring.