I had been looking forward to doing this pair of hills for some years and now, camping in Kinlochewe, I had the perfect opportunity. The skies were a bit grey, however, as I left the campsite just after 9am and drove alongside Loch Maree and parked at the green barn a few hundred metres east of Loch Bad an Sgalaig. I set off over the bridge opposite the car park then followed the wide path through the newly planted pinewood, past a rocky knoll on the left and then stepped crossed the Abhainn Loch na h-Oidhche burn, which was just a trickle.
At a point marked by two giant glacial erratics, I set off eastwards towards a narrow gully to the left of the steep NW buttress of Beinn an Eoin. Once in the gully, I followed traces of a path to a larger open gully and worked my way round to the NE side of the hill, past a number of crags and where I could get onto the main ridge of the mountain. From this point, the walking was excellent, passing over three minor tops until the final, much steeper summit ridge. With a combination of a few scrambling moves and bypassing the harder sections to the west, I made it to the top, a narrow ridge, only a few metres wide. It had taken three and a half hours to get there, and I was ready for my first lunch. The sky was still rather grey, however, the visibility was good with all peaks clear of cloud. 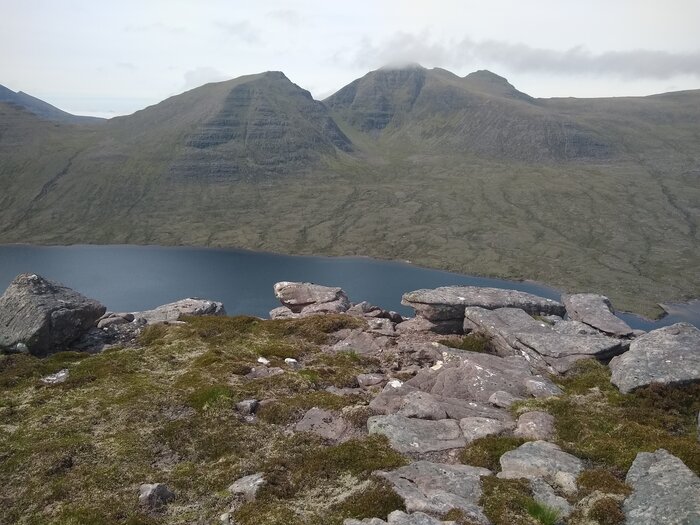 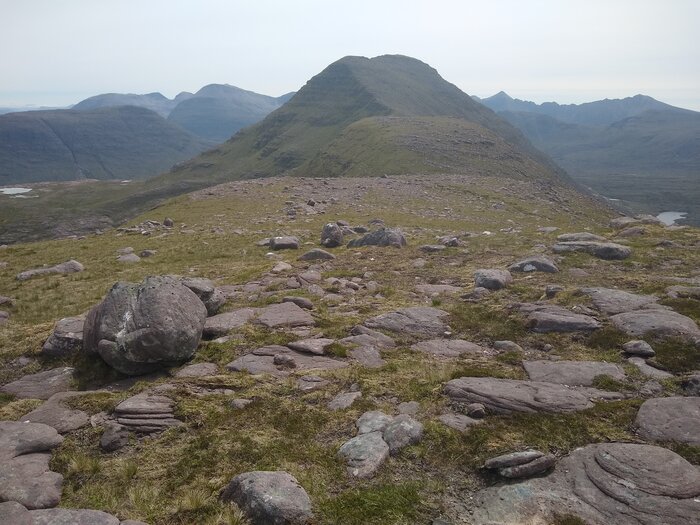 View towards summit of Beinn an Eòin from the 715m point The insignificant cairn at the true summit of Beinn an Eòin 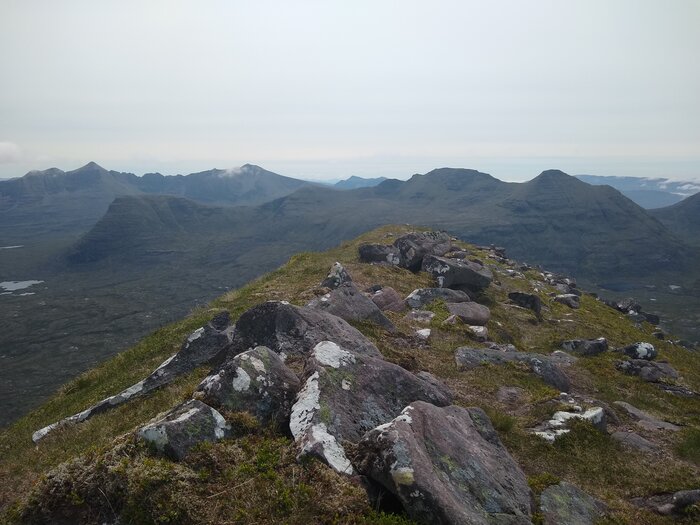 It was now decision time - to get to Baosbheinn, did I want to try the descent off the southern end, which involved traversing steep bands of sandstone crags with some down-climbing, or reverse tracks and ascend via the easy NE ridge? I decided to play safe and chose the latter option, so set off back along the ridge to the NE end. I had a few problems finding the route round to the final gully, but eventually recognised my earlier upward route and was soon heading down and back to the end of Loch na h-Oidhche.
There was no path across to the NE ridge of Baosbheinn so I had to work my way across rough ground with a few detours around pools and streams. As I got closer I could start climbing onto easier but steeper ground and was soon heading up the easy-angled shoulder on short grass and heather. On reaching a small col at the top of the slope, I walked round and up to the left onto the summit plateau and to the cairn. The clouds had gradually dispersed as I was ascending and at the top, it was mostly blue sky with good visibility in all directions. 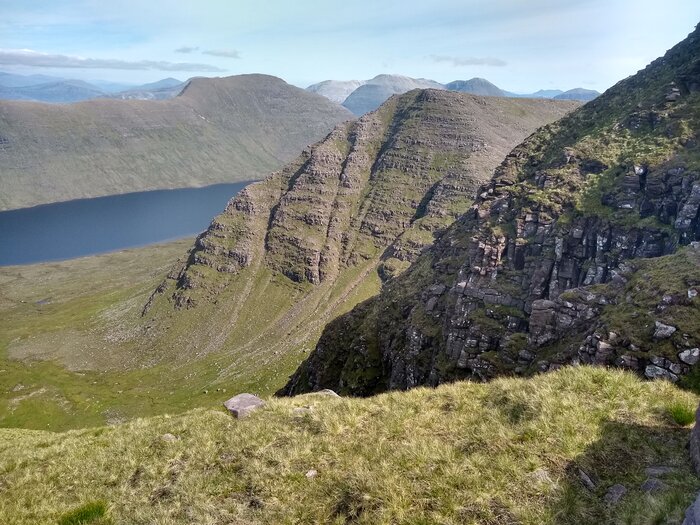 Looking NW from summit of Baosbheinn to its subsidiary peaks 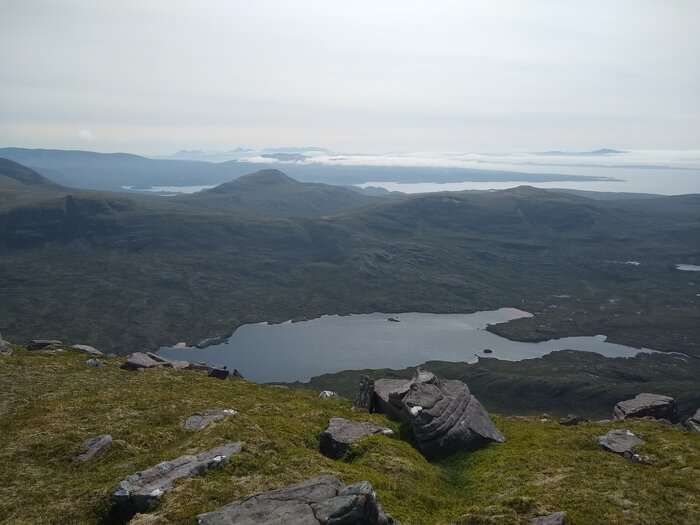 Loch a' Bhealaich and, in distance, Loch Torridon

Beinn Eighe, Beinn Dearg (with Liathach behind) and Beinn Alligin from Baosbheinn summit

After a good rest and more food, I began the descent, reversing my tracks back down to the loch, rather than continuing on to the northern tops - there's always next time! I made rapid progress back down to the floor of the glen and was soon striding along the good path I had come in on. There was still a matter of almost 5 miles to walk but the going was easy and either flat or slightly downhill all the way. I certainly felt quite weary towards the end - I had done five consecutive long days - but I'd already decided to drive home the next day - maybe just as well!
Near the end, I caught up with a couple of young ladies who had been rock-climbing and discovered the car park had been closed for road-resurfacing not long after I'd got there and they had had to park half a mile away. In normal times I would have offered a lift but with Covid, there was no expectation on either side so I bade them good luck. I got back to the car about 7pm and was soon back at the campsite for a welcome shower and meal. As it was my last night away and I had run out of beer, I set off for the Kinlochewe Hotel, hoping to get a drink - however - due to Covid, they were only allowing in people who had booked a meal so I returned disappointed and had a diet coke instead!

Re: Flowerdale Forest Corbetts - Beinn an Eoin and Baosbhein

Some smashing views from Baosbheinn in particular!

I've had my eye on that pair for a while...what a grand day you had for them.

Re: Flowerdale Forest Corbetts - Beinn an Eoin and Baosbhein

Excellent views, and a slightly different route than I've seen before, a bit easier than the full circle perhaps.

I've only done the Baosbheinn side so far, and that was long enough without another climb.