Ben Meabost and Dun Ringill - Bit of a wet affair...

Ben Meabost and Dun Ringill - Bit of a wet affair...


It was one of those mornings when all the tops were in the clouds. While walking through the cloudst can be very atmospheric certainly, I decided to go for one of the marilyns that had been on my list for a while: Ben Meabost. Supposedly it comes with good views in all directions. The weather would be changeable - so, why not give it a go!

I parked at the Camasunary car park wanting to walk up the slope on the northern side which is gentler and avoids the escarpment. I followed the main trail for a bit up to a metal gate that allowed me to get through fences without climbing. A few rain drops started to fall - I kept my fingers crossed and headed up the slope. The ground had turned boggy with the odd patch of heather slowing progress down a little. It had been raining a lot lately, so this did not come as a complete surprise.

A few hundred meters in, the rain started to come down heavier and the nice views across Loch Scalpin and over to Bhla Bheinn and Beinn na Cro started to disappear in the clouds. I was half way up already and the hill isn't that high - turning back did not sound like a good option. So, on I went, braving the rain and the wind. As the vision turned worse and worse, I followed the escarpment when the climb leveled out into a plateau. Every now and then little tops appeared out of the clouds. I started to realise that with this poor vision I may have to take out my GPS to actually find the top. No point going up a hill when you have not really been at the top!

And there it happened - the clouds started to open up! I couldn't believe it. Within minutes the plateau had cleared and I could see the surrounding hills, coasts and islands. Somebody must have taken mercy on me - I did not ask why, sometimes you just have to be grateful. The disappearing clouds made for a spectacular theatre in the Bhla Bheinn range with the clouds crawling over the tops opening up the views. With the light this was nothing short of stunning (I appreciate it does not show in the photos really... unfortunately...).

The cairn that is indicating the top also showed - no doubt anymore where I needed to go! The way down was a fairly straight line from here. Boggy for most of it, but very quick and within no time I found myself back by the gate and on the main trail to the car park.

With the rain having stopped and the sun now coming out, I did not want to hop back into the car. Up and down was only some 4k.- so I decided to check out Dun Ringill, the ruins of an iron age fort that were just a short walk from Kilmarie. So , I turned left towards Kilmarie and took the turn to the right in Kilmarie following the road towards the coast. Just before the hotel, an iron gate leads towards a bridge and into the woodlands. The bluebells were out and having veered right to follow the river the walk couldn't have been more beautiful. I followed the coastal path for a bit before crossing a stile into the woods - the bluebells were too tempting after the long winter.

The lovely little trail up the hill quickly disappeared. I kept the direction however and hit another trail. Turning right to follow the direction of the coast I followed a boggy trail through the woodlands. The trail had definitely seen better times. The frequent Rhododendron bushes suggeted that this must have been part of an estate at some point, probably well used by walkers. Now the trail was overgrown in places and fallen trees needed a bit of navigating here and there. Before long I hit the trail along the coast again and started to come past ruins. Some are quite sizeable and the coast line is very scenic too. The view over to Ben Meabost is grand - just that a solid cloud cover had now found its new home right across the top of the hill.

At the last ruin which has the remains of a doorway (I did not walk through it although that seems to be well possible), I turned uphill following a small trail to the top. The trail turns back towards the woodlands, so I kept following it. It became more and more overgrown, and I was wondering whether I may not be following a sheep trail only. I kept on it though as it headed towards the woodlands and the back to the road. After a while it turned more distinct and clearer and shortly after it reaches the woodlands it even turns into a very solid trail that looked freshly made. Somebody was clearly investing into the revival of the trail system. Well worth it as the little loop to the ruins and back is definitely worth a little detour.

When the trail turned into a forestry road, I decided to turn left into the woodland again as I assumed the trail may take me back to the bridge. After a short and very scenic walk through the woods I reached the bridge and was back on the little road. I followed it along the coast, past a WWII graveyard and a few cottages. The road turned quickly into a forestry road and into a well sized trail that runs above the coast with good views towards the Sleat peninsula. The trail is uphill for most of the time before reaching another road. I turned right uphill and within a few hundred meters was back at the main road to the Camasunary car park. By that time it had started to rain again and where Ben Meabost should have been towering right in front of me, there was only a big cloud. Guess I was lucky after all catching what may have been the only moment of the day during which the top was free from clouds. Following the escarpment ... there is not much else to see on the top yet... View toward Bhla Beinn with the clouds moving across from the tops... very scenic though View towards Lock Scavaig and Gars-bheinn View of Kilmarie and Loch Scalpin on the way down The very solid bridge suggest trails that aren't quite there in reality... but maybe soon? Bluebells along the way... so lovely! 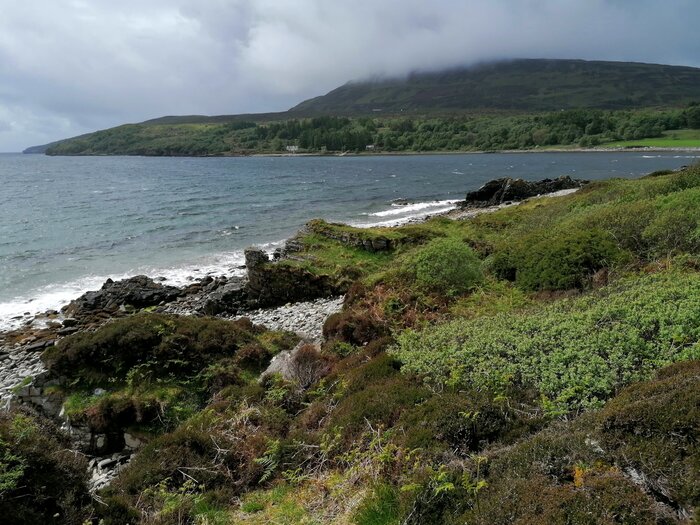 View over to Ben Meabost, in clouds again... Some ruins along the way View along the coast at Dun Ringill There is a rock with hole even - maybe a former window or a door? View back towards the Suirinish coastline There should have been Ben Meabost...