Waking up above the clouds in West Monar

Waking up above the clouds in West Monar


My usual approach to tackling the more remote Munros so far has been to wait until the height of summer, get up at 3am and get them done in a day. For several reasons (the main one being that I’ve been eating too many biscuits lately!) that wasn’t an option for these though so thought I’d try the whole wild camping thing.
I don’t have the lightest kit for camping so I settled for the idea of just taking less of it to compensate, and with everything neatly packed away in my rucksack I headed up the track that follows the Allt a’ Chonais. It was a nice easy start to the day following the large vehicle track and the low cloud that had worried me on the drive up was gradually clearing to give some fine areas of blue sky and allowing me to see the tops.

This was my first time carrying camping kit into the mountains so I had no idea what to expect when it came to my pace or how comfortable I would be, but the early signs were good that I could march along at least on the sections of decent paths (not that there turned out to be a lot of that!)
I took the small path off to the right to take me to the river crossing and the stalkers path that lead to the Bealach Bhearnais. There was a 2 wire bridge at the crossing with a sign saying “you use this bridge at your own risk” I could also see that the post it was attached to was rotten and lying on the floor.

This wasn’t a problem though as the water was low enough to hop across the stones for a dry footed crossing.
The clouds were lifting and dispersing at a nice rate so as I got to the Bealach, I had some fine views and I pushed on to the summit of Beinn Tharsuinn. A fine mountain, albeit very much in the way of the Munro bagger.

The view of Biein a’ Choire Sheasgaich, my next mountain, was a bit daunting.

I could see that there was a big drop down between the hills and some hefty crags that looked to block the direct way to the summit. I Had read some previous reports on this site that claimed that it was easier than it looked, so decided to take them at their word.
Sure enough, it was possible to follow some grassy gullies all the way up without having to detour much from the direct line and I was soon onto the easier ground leading to the summit.

Lurg Mhor by contrast looked pretty close and easy to get too, with a relatively high Bealach at about 750 meters. From the Bealach it was a simple out and back to the summit, so I ditched my bag and had a nice light and fast section of the day bagging this one.

I was re-acquainted with my bag and set off on a particularly tough section of pathless, heathery and boggy ground down towards the western tip of Loch Monar. This was the section of the route that felt the most remote. No sign of other people, no sign of any civilisation at all in fact. Just me and the mountains!
My plan was to heat straight up the south west flank of Sgurr na Conbhair, but the closer I got the tougher it looked, and I was tempted by the path up the Allt Bealach Crudhain, which took a longer but less steep line up. This would have meant almost crossing my steps from the morning though so I took a deep breath and headed directly up the steep heather.
I had to play a few games with myself to get through this, as I was fading fast. I’d been on my feet for 9 hours and the heavy bag was starting to take it’s toll. I gave myself 90 minutes to reach the top and checked my altitude every 10 minutes, rewarding myself with e breather if I was a head of schedule. It might not be everybody’s idea of fun, but I get a certain satisfaction from the suffering!

Once I got to the ridge I could see that the clouds were starting to build again and it was nearing 7pm so I decided to get to the top of Sgurr Chonnich, then look for a suitable spot to camp.
Being on the summit of a munro in the evening light was superb, and Sgurr Choinnich is a fine summit. Although the cloud was building, I could see down Loch Carron towards the Isle of Skye and the Torridon mountans where looking fine, silhouetted against the lowering sun.

I dropped down to the Bealach between Sgurr Choinninch and Sgurr a Chaorachain and found a lice flat piece of ground to set up camp. With the tent up, the stove on and the views of the setting sun to the west it was a pretty perfect evening.

I woke up at 2am regretting my choice of sleeping bag. I was cold and I knew I would feel better if I put all of my spare clothes on, but the thought of exiting the sleeping bag to do so did not appeal. I don’t know how long I procrastinated over this but it was far too long. Eventually I relented to the inevitable and managed a couple more hours snoozing before deciding to just get up and make a hot drink.
Being forced to get up at half 4 might sound like a bad thing, but when I popped my head out of the tent I saw I was looking down on the clouds from my lofty perch.

This lasted for 10 glorious minutes before the cloud lifted and engulfed me. If I’d had a comfortable night’s sleep I probably would have missed it, so there’s a silver lining.
I’d had my coffee and breakfast and was packed up and walking by the time my 6am alarm went off and had a very sort climb to the first summit of the day. The top 10 meters of Sgurr Chaorachain was just sticking out of the clouds and in the sun. A fantastic start to the day. 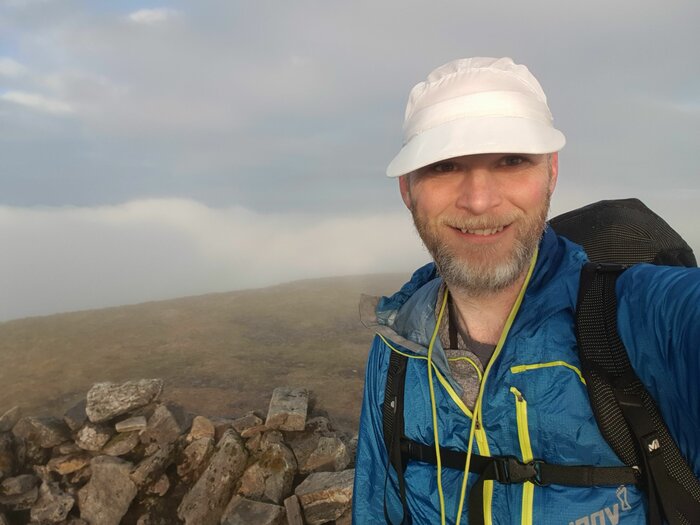 I sat down to have my 2nd breakfast (most important meal of the day!) and by the time I’d finished I was back in the clagg and remained so until I’d dropped to Lochan Gaineamhach where thankfully I had some visibility for the tricky terrain to get to Drochaid Mhuilich.
It was a nice steep climb from here and the heather gave way to much easier grassy ground as I climbed back into the clouds. It was nice to be strolling along the plateau, over Carn nam Faiclan. I reached the cairn at Creag Toll a’ Choin and noticed it was marked at the same height at Maoile Lunndaidh so touched the top to be on the safe side before heading off the what I thought was the Munro summit proper. I read later on that the tops have been re-measured and Creag Toll a’ Choin is now the Munro, so was glad I did!
I headed north from the summit and met a vague path, which I followed along the Allt an Fhuar thuil Mhor until I once again dropped below the cloud level.

The path was then nice and easy to follow all the way down to the floor of the glen, where I paddled across the River Meig, climbed slightly on the path to Glenuaig Lodge, then followed the large vehicle track all the way back to my car.
I’ll be adjusting my kit a bit in the future, but for a first time wild camping in the highlands, I’m super chuffed with how it went. It’s a very different experience to take my time and camp out, compared to doing big distances in a day trip, so I’m sold on it!

Nice report. The area does look very remote. Don't get many remote areas nowadays. You are getting closer to your completion.

I like this. Big route and lovely pics. Probably get into this area over the course of this summer but not sure whether I'll do all 5 in the one trip.

Ah, interesting one! Had mad a group of guys on Beinn Liath Mhor the other week who were talking about doing part of that in one day. I quite like the idea of adding some additional ones and doing it as an overnighter. Will definitely add to my to do list! Thanks for the idea