Ben Avon (not quite) and Beinn a Bhuird from Keiloch

Ben Avon (not quite) and Beinn a Bhuird from Keiloch


Halfway through my Braemar holiday and finally a day which was a) dry and b) clear Munro summits. Since I had walked some of the central Cairngorm summits earlier in the week, I decided to have a go at the eastern Cairngorm summits, Ben Avon and Beinn a Bhuird.

A short drive to Invercauld Bridge and the car park at Keiloch, then off on the bike, the first stage to cycle to the glen Slugain ruins. Easy enough on metalled roads to start with, then as I progress the road becomes a track, which gradually gets rougher until I give up and start pushing the bike uphill near where the path splits. I took the higher path and left the bike in a side gully, but looking down, the lower path looked in much better condition for cycling and I probably should have used that to get to the ruin. From where I left the bike it was a short walk to the ruin, then a climb out of the head of the glen onto a large open area with the mountain plateux of Ben Avon and Beinn a Bhuird dominating. The views along the Quoich water towards glen Quoich were nice as well. I now see what people mean about the drainage channels across the path and the difficulty to cycling they present. I reckon a good mountain biker would have no problem with them.

It is a fair hike along the moorland path to get to the base of Ben Avon, but I just took a comfortable pace and eventually made it to Glas Allt Mor. Started the climb proper, passed someone on the way up and reached the Sneck, where I immediately got buffeted by wind being funnelled over the col, so I didn't hang around and went straight up to the Ben Avon plateau. It was up there on the last mile that the wow factor really kicked in. The landscape with its tors is scenic enough, but I was not expecting the views out to the horizon to be so massive. I thought the plateau would take the edge off the extent of the views, but I was surrounded by distant peaks all around. According to a couple returning from the summit tor the high peaks I asked about in the distance was the Beinn a Ghlo range, which is a good 40 miles away (I stand corrected, it is only about 20 miles away as the crow flies). It was breezy but less so than at the Sneck, and I had my lunch in the shelter of the summit tor. I investigated the possibility of scrambling onto the summit proper and there is a cleft where you can get in and scramble up, but I was like a sore thumb sticking up into the wind, and I didn't fancy risking losing my balance and falling off, so I gave the true summit a miss.

After lunch Iwalked back to the Sneck and up to the Beionna Bhuird plateau. This was equally spectacular with superb views of the eastern corries and down to the Dubh Lochan. There were some cornices on some of these corries, and I can see how in winter conditions this could be very dangerous. I followed a route close to the corrie rims, over the Beinn a Bhuird north and south tops, then headed for Carn Fiaclach where a path leads back to the inbound path. Before reaching the path, I had to stand trial in the form of a Cairngorm boulder field, which required some careful negotiation, I was glad I had my poles for extra stability.

Once I reached the path it was an easy walk back to the ruins apart from the simple river crossing that even with poles I managed to cock up and I lost balance and got my left foot partially damp, fortunately not managing a complete submersion. Back to the ruins and along the glen where I picked up my bike. Because I suck at mountain biking, I was pushing the bike for most of the first mile and a bit until the roughness decreased to the point where I felt comfortable riding. Took it steady, once back at the woodland the track improves significantly and on reaching smooth track/road I could hammer back to the car park. Given my feet were starting to get sore towards the end of the walking, I was so glad I didn't have a hideous footsore slog back to the car. The ruins, Gleann an t-Slugain 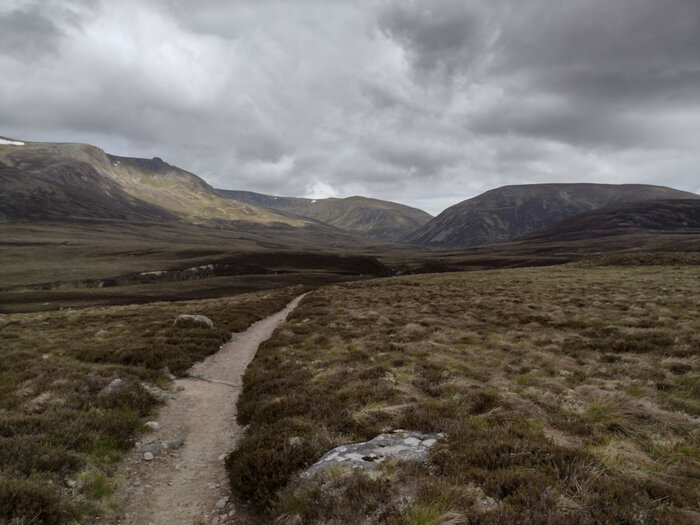 Beinn a Bhuird and Ben Avon on approach across the moorland Looking towards the rest of the Cairngorms Looking west from Ben Avon to the northern plateau of Beinn a Bhuird. Huge views, Beinn a Ghlo on the horizon Looking back to Ben Avon Don't play on the snow. Re: Ben Avon (not quite) and Beinn a Bhuird from Keiloch

al78 wrote:According to a couple returning from the summit tor the high peaks I asked about in the distance was the Beinn a Ghlo range, which is a good 40 miles away.

Didn't think this sounded right, Beinn a Ghlo is relatively close to the Cairngorms, even if it's a long drive round from Blair Atholl.

Re: Ben Avon (not quite) and Beinn a Bhuird from Keiloch

al78 wrote:According to a couple returning from the summit tor the high peaks I asked about in the distance was the Beinn a Ghlo range, which is a good 40 miles away.

Didn't think this sounded right, Beinn a Ghlo is relatively close to the Cairngorms, even if it's a long drive round from Blair Atholl.

Thanks, it is probably 40 miles by road, not as the crow flies.