Beinn Bheula on the way past

Beinn Bheula on the way past

our_route.gpx Open full screen  NB: Walkhighlands is not responsible for the accuracy of gpx files in users posts
Day 3 of a family holiday walking the Cowal Way (North to South) and the 4th Corbett of the week for me.

All 3 of us started from the Drymsynie House hotel and had a very pleasant stroll along the shores of the north end of Loch Goil, following the Cowal Way waymarkers to show us the correct route through/out of Lettermay - watch out for a left-turn when straight ahead feels like what you should be doing.

Steady climb up through the woods, with improving views back over Loch Goil to the 3 Corbetts beyond.

My wife turned back around the middle of the right-left dog-leg, to check out from the DSH hotel and drive round to Strachur, while my adult son and I continued the walk north & then westward up the forest track to a waymarker-free junction in the track NN 1769 0004, where my trusty and highly-respected friend, the UK's Ordnance Survey, let me down, big-time!.

Check out the 1:25,000 Explorer map at this location. The track to the right leads towards the river and the Cowal Way continues along the river to Sruth Ban, right? Nope! The track to the right leads to a little building and stops and there is NO path anywhere through the ankle-twisting, boggy, pot-hole-ridden, fallen-tree-filled, energy&morale-sapping clear-felled hellish wasteland that lies between there and the track that we should have just have stayed on. So, not really a navigational error (we knew exactly where we were, we just didn't want to be there!), just too much faith in the map and not enough in what our eyes were telling us (which is that there was clearly no path along the river!

We eventually floundered our way back to the track we should never have left and had a snack by a bridge over a wee burn, before climbing up the south side of the very-scenic Sruth Falls and a steady climb on a slightly-boggy path to the fence on the 310m contour, east of Curra Lochain (not yet in view), where we parted company, with my son continuing on westwards to Strachur, while I tackled the cloud-obscured Beinn Bheula. 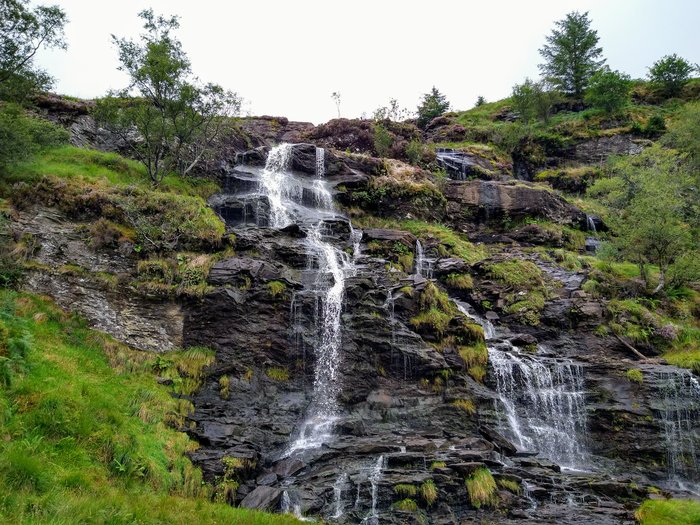 My route aimed right of the summit of Beinn Bhreac, (roughly halfway between the burn and the summit of the broad Beinn Bhreac ridge, and as a result was a bit of a pathless slog at times, with nothing but clag-obscured scary-looking cliffs where I was meant to be heading. I eventually decided that Beinn Bheula was going to beat me and would have to wait for another day, with better visibility, sat down on a big rock, took off my rucksack and had my lunch.

And, as I sat there, munching my squeezy-cheese wrap and cereal bar, I realised there was a faint path heading in the right direction, about 10m to the left of where I was sitting.

Rucksack on, hopes soaring again, I followed this path, which was perfectly visible once you were on it, round and over a couple more bumps and after about 200m it headed up the broad grassy rake that I had been peering into the clag to find for the past 25 mins. 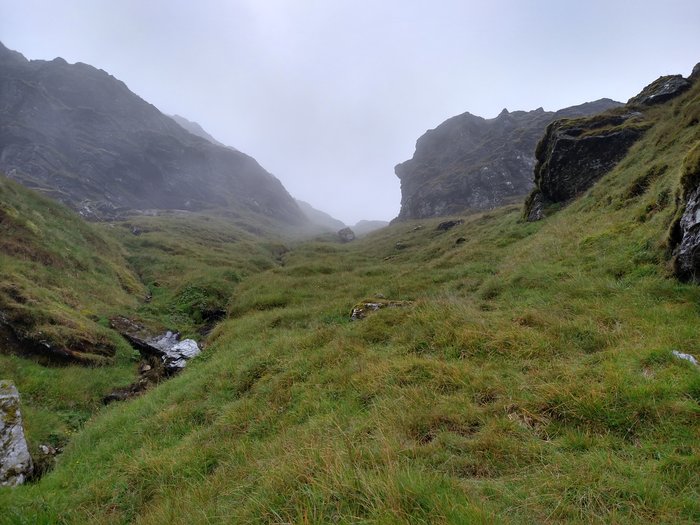 The Grassy Gully (providing the safe route through the cliffs)

This was the sort of moment you want some company with you, to high-5 with and do some manly-back-slapping and hand-shaking, etc, but as I was on my tod, I just grinned like a Cheshire Cat and ploughed up the steep but straightforward grassy gully as fast as my tired old legs would take me.

Reached the surprisingly-grassy ridge (at NS 1547 9851), still in the clag, so grabbed a Waypoint on my Garmin, to make sure I didn't do anything silly involving cliffs or dying on the descent and headed in a straight line for the summit, reaching the circular trig point and its 360-degree wrap-around shelter-wall shortly after 2pm (so 4 hours after leaving Lochgoilhead), still grinning and still in the after-glow of the adrenaline rush from having just dodged a 'Failed-to-Tick' bullet. 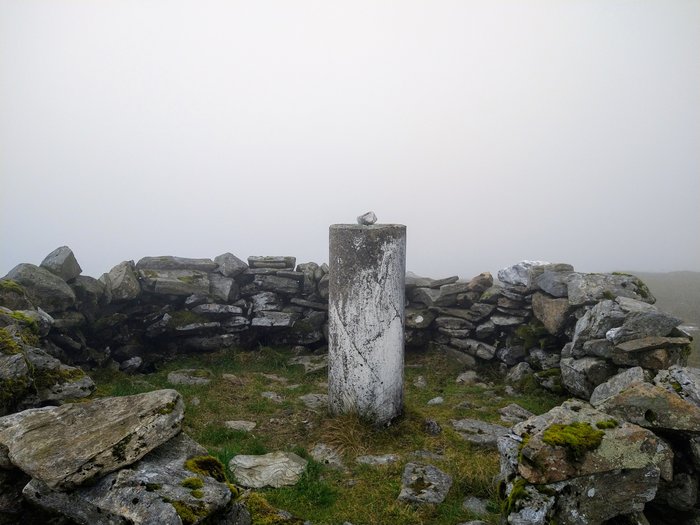 Descended by the same grassy gully and followed the faint path all the way back over the high-point of Beinn Bhreac (past some treacherous deep gullies, right by the side of the path (so be careful in snow!), a steep but straightforward descent down steep grass (likely to be lethally-slippy in slushy conditions) and back to the out-flow from the Curra Lochain and the very pleasant cross-country Cowal Way tramp down to Strachur , with some great views back to the long ridge (Carnach Mor to Creag a' Bhuic), which looks like a fun route to Beinn Bheula from Strachur and, eventually a well-earned evening of beer and luxury in the most-excellent Creggans Inn, on the eastern shores of Loch Fyne. 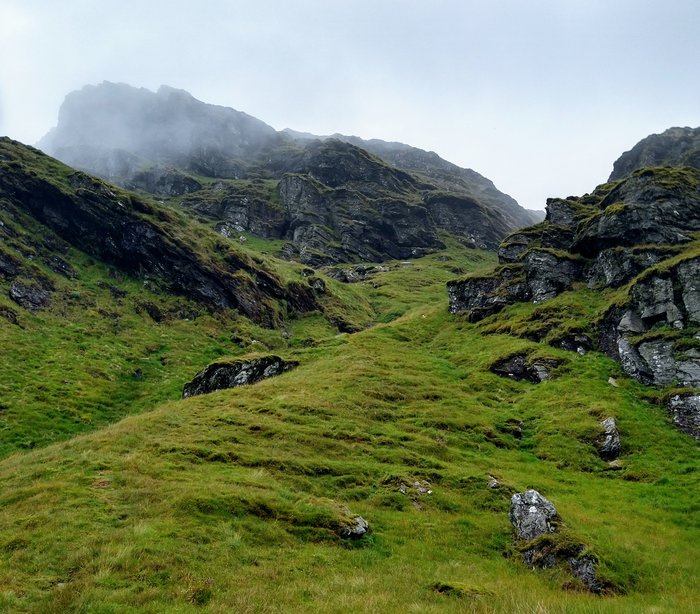 Looking back up the grassy gully 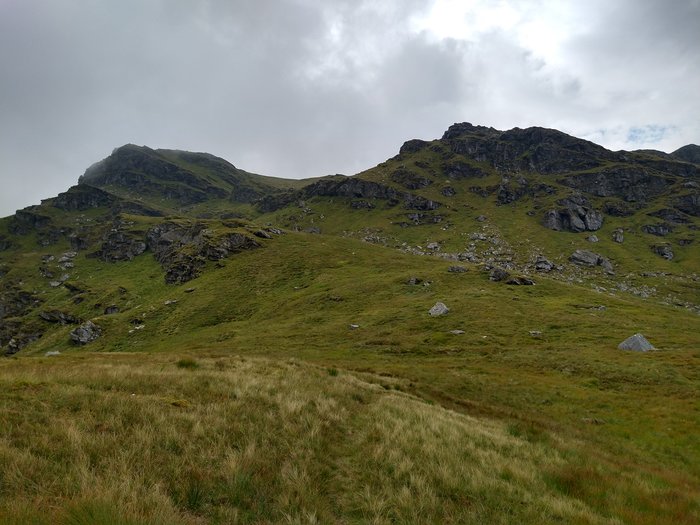 Looking back to a cloud-free Beinn Bheula and the faint path, from Beinn Bhreac 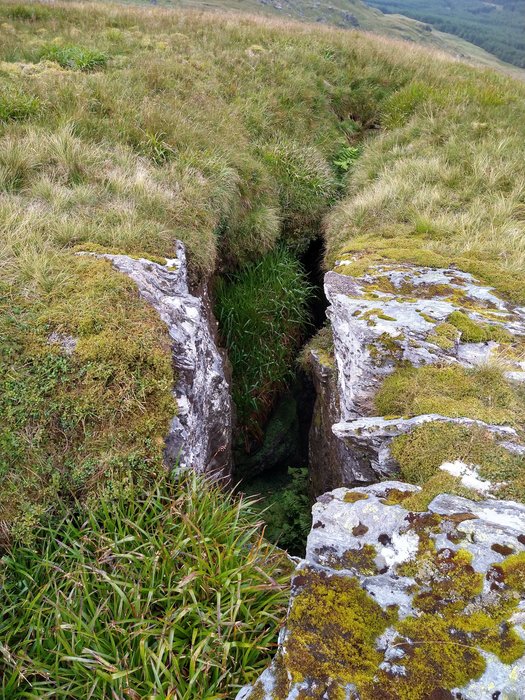 The Crack of Doom? 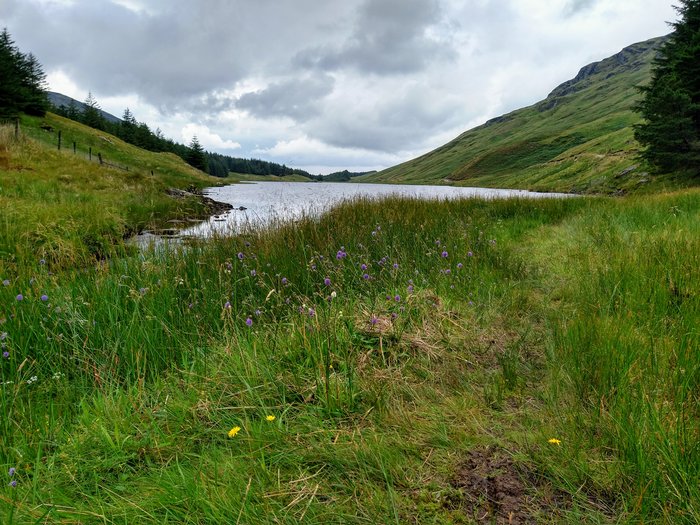 All-in-all, a cracking day out, a couple of dodgy navigational decisions and a great Corbett success snatched from the jaws of defeat. In terms of lessons-learned, I'd recommend heading for the high point of Beinn Bhreac on the ascent, to pick up the faint path asap.

(NB I'll do a Long Distance Routes Walk Report for the full Cowal Way week, when I get a chance, if anyone is interested in hearing more details of TheBold family's 2020 Summer Holiday adventure?)