I'm not one to climb a mountain just to touch the cairn, or to tick off a list, or simply to say I've been there. I like the challenge and excitement of the climb but most of all I love the fresh air and the scenery and I don't mind a bit of bad weather and discomfort as long as I can see something. So on 28th Jan 2011, with a forecast of cloud clearing the tops by late morning, daughter and I set off for Ben Challum on a fairly crisp morning. Unfortunately I forgot to pack my gloves but being always ready to improvise I fashioned two woolen scarves into gloves and off we went - you can always turn back!
Ground conditions were terrific that day. The bogs were frozen and higher up the snow and ice were made for microspikes. Problem is - the cloud never broke and a NE'ly wind sprung up - one of those lazy winds which would rather go through you than around you. Nevertheless we reached the 997m summit in quick time for us. This was decision time - we were in thick cloud with visibility less than 10m, we were forewarned that navigation in such conditions was tricky from that point, my makeshift gloves were losing their effectiveness and my hands were getting cold so we decided to cut our losses and retreat downhill to some sheltered spot where we might consume our hot soup. where's me gloves, it's freezin' up here still got a sense of humour though!

When we finally arrived at the car, to our great chagrin the cloud dispersed from all the tops. We both decided at that point - that bloody hill owes us one.

Still reeling from our previous failure so close to the top, on 12 Feb 2011, with another forecast for breaking cloud we set off to take our revenge and savage that infernal hill. This time we forgot nothing thanks to my new check list. 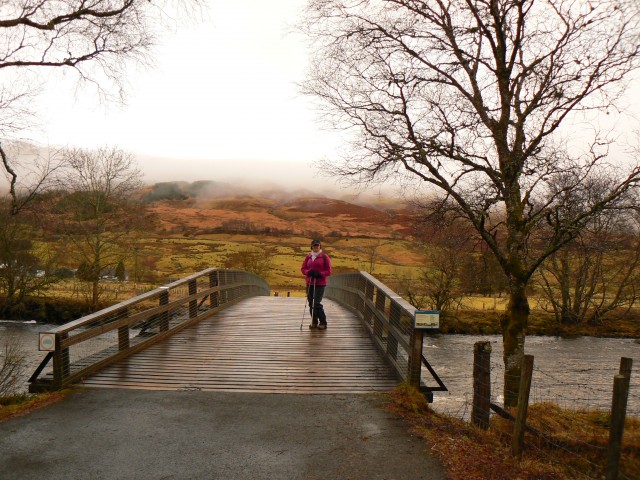 did you remember the kitchen sink dad?

So it was past the farm, in between the graveyards and up to the railway crossing. Yeah, that's a railway all right! 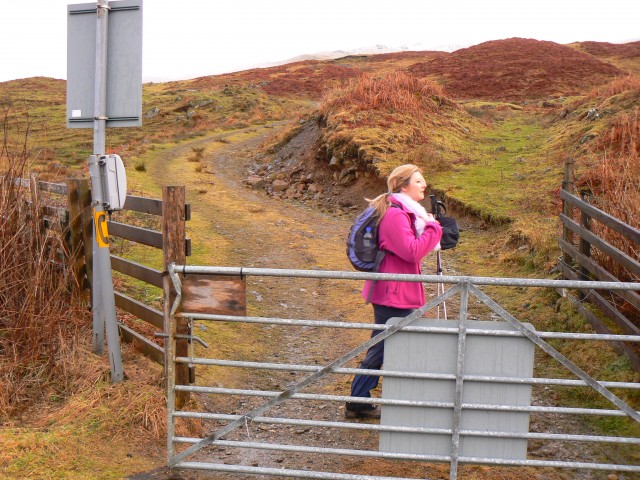 Leave the track here and join the faint path

Then onto the open hill. Initially the ground was exceedingly boggy, just above the snow line it was wet and slushy and higher up, thanks to overnight snow, it was slightly deeper than was comfortable. About half way up we were in cloud again - how rotten is that? 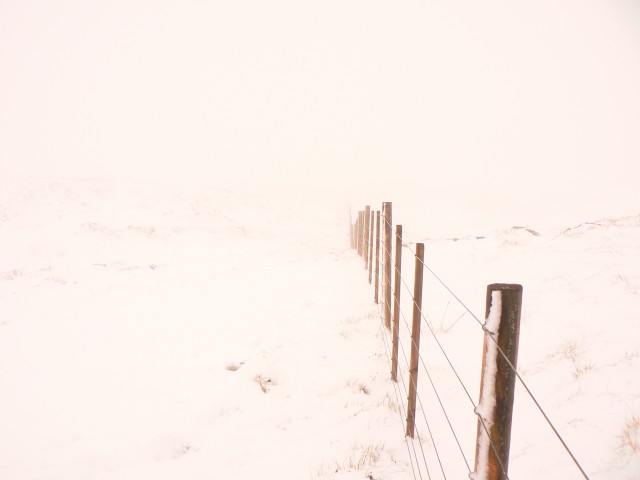 Our ascent was slower this time and I was beginning to feel the effects of the virus which the wife had so kindly passed on to me. The old lungs were gasping for air and the thighs were burning - but this bl--dy hill was not getting the better of me a second time so on we pressed. In addition to all the other problems, because the cloud kept promising to break and we could occasionally see the sun, the light was very bright and my reactolight glasses turned virtually black. In the high humidity condensation kept forming to the eye-side of the lenses rendering me almost blind - at this point I felt as old as I am - not a good feeling! However we eventually reached the south summit in a slow three and a half hours. Visibility was less than 10m again but we decided to go for it this time - after all, although we knew that navigation would be tricky we also thought that it was only a hop, skip and jump to the north summit - we should have known that this would not be the case in fairly difficult conditions. It took us a further 40 minutes to reach the true summit, but we got there, even though we saw nothing but a cairn and the bloke who passed us on the final little ascent and took our photo - thanks mate! Having taken so long to get to the top we didn't want to waste any time coming down so we didn't delay. As we decended I decided to remove the troublesome specs - what a difference, brilliant, even though I wear them permanently I was able to see a lot better without them on this occasion. They had been nothing but a hindrance. Soon we were warming ourselves with a hot drink and lots of chocolate and then it was not long before we were at the car slipping and sliding some of the way. As we got to the car what did the cloud do - you're right, it dispersed. At that point the mountain seemed to laugh at us as if it had beaten us again but I think we won on points - so take that Ben Challum (or is it Challium) you don't even know your own name.
Even though we didn't get many good views we got plenty of fresh air, a couple of good challenges and a final victory over that unseen piece of rock.

Cheers Y'all and good safe walking

Well done on making it at last oldman ,went up there last sunday and also had problems finding the top.You can read about our trials on my brother in laws (huck finn)report.

Hi Oldman, cracking report that had me laughing

I share your thoughts when you say "but most of all I love the fresh air and the scenery" me too. I think you beat that hill - with or without the views and I enjoyed reading all about it

Cheers Kevsbald, I read your report several times. The pics are brilliant. I'm green with envy 'cause your pics are the views I had hoped to see!!

'That bloody hill'.
We did it last year and I can honestly say it was the wettest day we have ever had on the hills: the rain was relentless and we were totally soaked through. We kept going because we thought the skies would run out of water! As we neared the top I was positive I could hear morse code (Wife thought I had lost it)- not quite - it was my camera calling for help as it was nestled in a puddle of water and was in the throws of a final short circuit. So, no views, soaked, cold and one knackered camera. Not a happy bunny that day!
'That bloody hill'!. Great report though - liked the moody skies.

Cheers y'all. I agree with the Walkhighlands Summary - That "bloody hill" may look undistinguished from the A82 but it seems that lots of folk, including myself, have discovered that it has lots of character with a big sting in its tail if you're not careful. I suppose it's just typical of our wonderful Scottish Mountains which sometimes look so benign that some underestimate them, don't give them the respect they deserve, and end up getting a harder time than they anticipated. It's all right having a sense of humour about one's experiences in the hills but you always have to respect the risks involved in such an exhilarating and worthwhile pastime.

Loved your report, and admire you for staying with it!

yokehead wrote:Loved your report, and admire you for staying with it!

This is not a sliding style, this is a man in great pain. At that point I had cramp in both thighs and was pleading with daughter for salt and water (poor oldman) - she thought it was better and a good laugh to take a pic first - thoughtful girl!!