With George away playing sailors on the Clyde, that meant Parminder and I could head back to the Cairngorms utilising our bikes. So where to go? Parminder had 5 hills left so I opted to tackle the trio from Linn of Dee, with these 3 done and dusted Ben Avon & Beinn a'Bhuird can be tackled together.
Next problem is work out a route, the trio planned are not normally linked together as the ascent/descent between Mheadhoin & a'Chaorainn is not exactly walker friendly. This wouldn't put us off though. I knew there wouldn't be a path up Mheadhoin as it isn't normally tackled from Glen Derry but we are getting used to improvising.
The last time I tackled Beinn Bhreac I linked it with Beinn a'Bhuird and then finally with Beinn a'Chaorainn.
As we were biking Parminder would be chief driver as he has a bike rack that fits on the back of his Beamer. Parminder even knows the way now without having to be prompted!!
We arranged to meet at our usual spot at 6.30 and head north. The weather forecast wasn't ideal, especially the wind and I thought the wind would mean no midges - wrong. Linn of Dee car park is in the middle of a forest and as such very sheltered, so the wind wasn't penetrating through the trees. Parminder was cursing and moaning and donned his midge net rapidly, suffice to say he isn't very fond of Scotland's favourite little insect.

I have to apologise for the lack of photo's especially towards the end of the walk, the main reason was the conditions, the wind made it nigh on impossible to hold a phone or a camera steady and I also left my phone cable in the car so was running low on battery - so my portable charger that I have in my rucksack was useless.

I stopped to wait for Parminder and it was lashing down, we made an executive decision when we left the car not to bring our waterproof trousers - a quick chat and we decided to soldier on and "man up"

Once you get to Derry Lodge, you are faced with a number of paths and options that will take you in different directions. Our path was the furthest right and would take us to the foot of Beinn Mheadhoin

Parminder getting himself ready for the many miles of marching

A bit of blue sky to motivate us, the walk along the path is a fair old hike

The plan was to tackle Beinn Mheadhoin first for a couple of reasons:
1. If we did it the other way we may decide against the slog up the heathery slope of Mheadhoin
2. I knew the route before and after Bhreac is long and decidedly boggy and didn't fancy wet boots for the long walk back
3. The wind direction. The forecast was for south westerly winds and doing the route clockwise kind of made sense

Our first glimpse of our first hill Beinn Mheadhoin

Scotland in all it's glory

The path varies in size and structure but is generally excellent

A going down bit which is never popular with walkers

The initial part of the walk is stunning

Bridge appears to be closed off, not that it affected us

We are out the forest now

Parminder with a tree on his head, bet I couldn't do that again if I tried

A newer plantation, although I do remember it from my last visit 5 years ago

Still plodding on, we would be ascending via the lump ahead up the right hand shoulder

A faint rainbow, I was pointing at it with my stick to show Parminder

Looking back from further along the glen

And again, if you look carefully you will see the Hutchison Hut on the left of the photo

We have now just left the comfort of the path and looking across to our planned ascent route up the 2nd hill Beinn a'Chaorainn, if you look closely there is a zig-zag path

This is our ascent route up Mheadhoin, no path for us we are used to going off piste. It was decidedly tough going, knee deep heather, bouldery and boulders hidden amongst the heather

Looking across the glen to our 2nd hill

Parminder leading the way, also shows how steep and tough it was

Looking across to the summit of a'Chaorainn

Once we reached the lower summit area of Mheadhoin the going was much easier, no heather and an easier gradient

Our first close up (ish) glimpse of the summit of Mheadhoin

Even closer now, plenty of these unique rock formations

Summit, normally we would have been all over these lumps but the wind made us use a bit of common sense

Parminder battling the elements to reach the summit

Looking back towards Linn of Dee etc

They really are quite big lumps, makes you wonder how much they have changed over the years 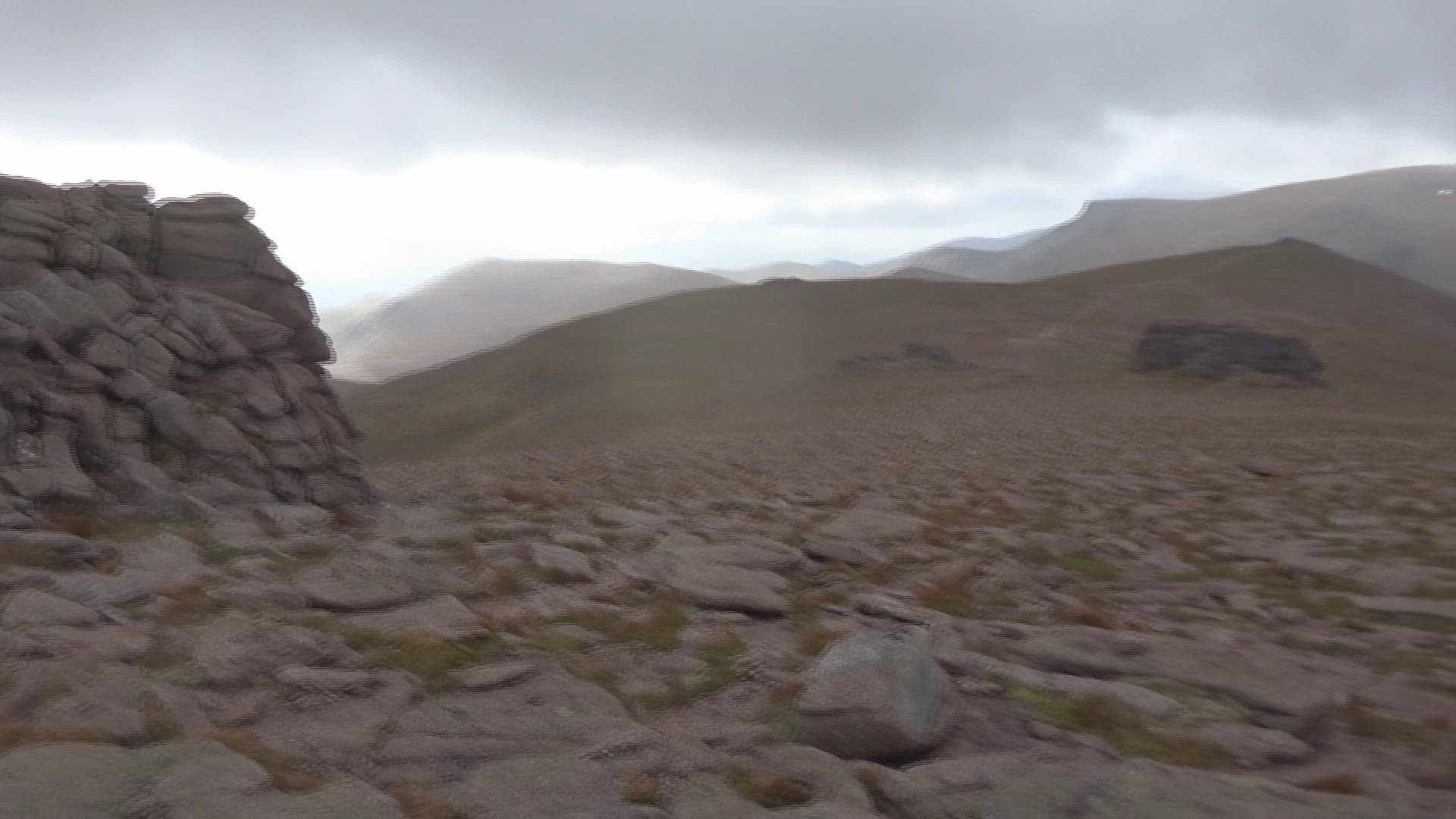 Video taken on the summit of Beinn Mheadhoin, you may need to turn the volume down as the wind makes quite a din

Now we are descending back down towards the main track, almost retracing our steps

Looking down the glen, also shows the angle of ascent/descent

During our descent we spotted our first signs of human beings, a couple of cyclists who looked like they were being caught by three runners

Good bit of balancing required on the large rounded stones

Looking north up the glen towards Dubh Lochan

Ascending up the zig-zag path up the side of a'Chaorainn

Looking back to the first summit Mheadhoin 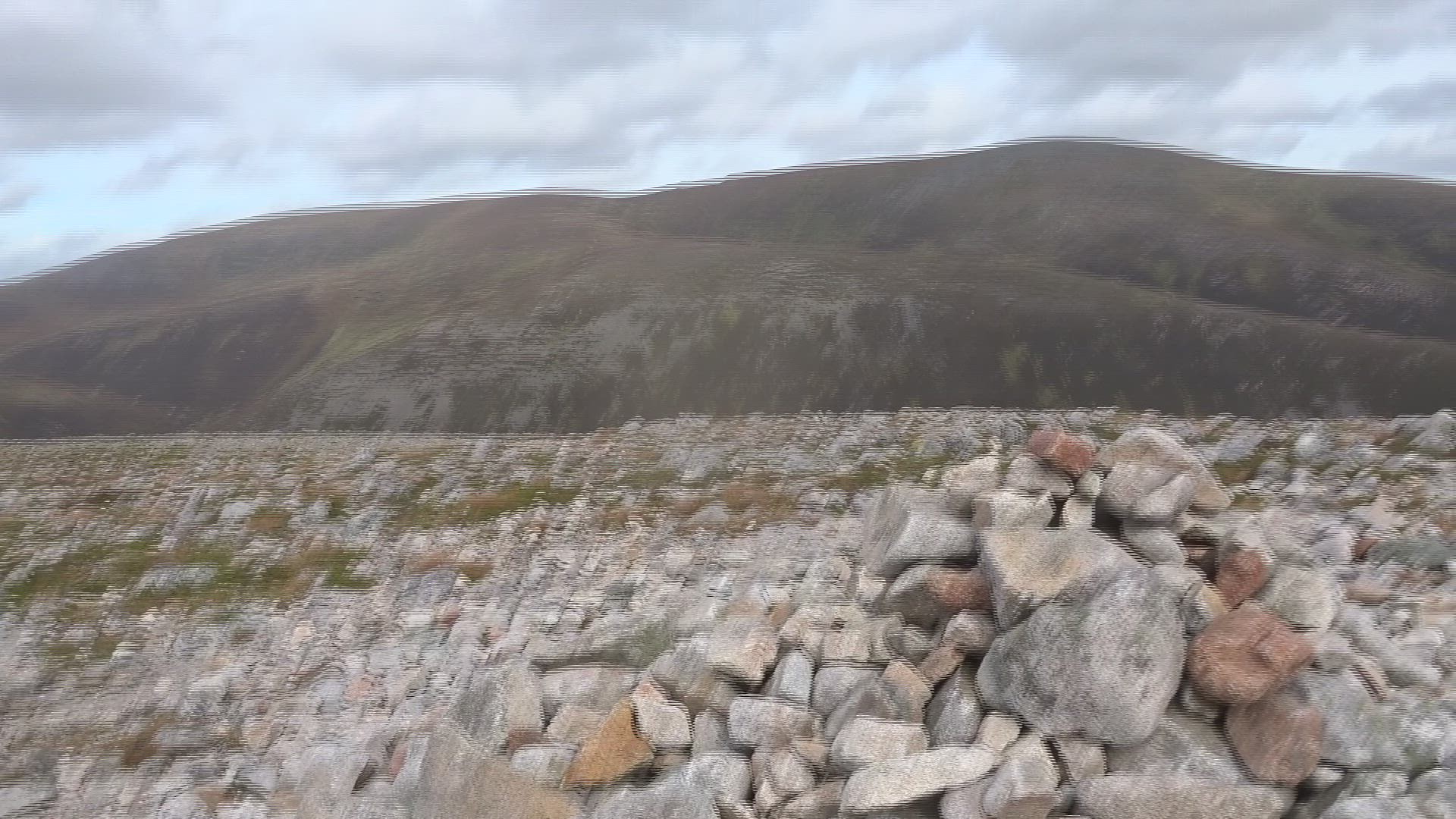 Video taken on the summit of Beinn a'Chaorainn, I didn't do a full 360 degrees as the wind was about lift my hood and my cap would have ended up in the North Sea

Looking down on the boggy mush lying between a'Chaorainn & Bhreac

After studying the terrain from on high we opted to head east initially, then head south on the slightly higher ground which in theory looks and should be slightly drier. We also attempted to avoid the majority of the peat hags, with a degree of success. Anyone who has walked between these two summits will I am sure agree that it is not particularly pleasurable.

Descending over that lot wasn't easy as the wind was gusting

Beinn Bhreac in the distance, you can see how flat the ground is in between the two hills

The walk across Moine Bhealaidh towards Beinn Bhreac wasn't much fun at all, I dread to think what it would be like after a spell of wet weather. All we could do was pick our way across the mush and hope we didn't find a real soggy bit, there aren't many patches on the Scottish hills that can compete with the approximately 2 miles of mush.

My final photo looking back again

No photo on the summit of Bhreac as I only had about 20% of my battery left on my phone, I even switched on "flight mode". Parminder took a couple of photo's which may be a bit blurry as the wind seemed even stronger, not that we need to worry as nobody ever sees his photo's.
This turned out to be another cracking day even with the strong wind and another 3 blue balloons for Parminder.

Re: A different Cairngorms trio

Well done guys, tough day given the wind too.