Went to bed reassured by the weather forecast that predicted a grand day on the hills. Perhaps I am too trusting in those engaging in chaos theory as mostly I trust them though seldom are their prophesies fulfilled. The view oot the windie

True to form we awoke – not to glorious sunshine but snow coming down in Narnia like proportions.Oh Jings! (actually I used a fairly strong adjective (or maybe its a verb?) if I am to be honest). With no wardrobe to play in we threw caution to the wind and got ready to embrace the elements – after it had stopped of course!
The route up Glen Lochay is a narrow road, fairly flat and even with a reasonable amount of snowfall the basic family car is capable of navigating it without exposing you to the shaking head of disbelief from the local farmers. Reaching the start we were amazed to find someone had beaten us to it and was already heading for them hills. We quickly followed but not as quickly as him (now named the 'gazelle')! The clearly marked track from the road up to the Shielings was not exactly straight forward and we realised that if this was the lower slopes the upper slopes were going to be a challenge – peat hags and all!
This is 'gazelle' heading off into the distance.. The books had said head straight up and this is what we did using a reference point (the 'gazelle'). This was hill walking – but not as we know it. The snow was deep between the heather clods and it became apparent that the best way to do this was to use the heather as stepping stones. Again, referring to the guidebook there is reference to paths and tracks – eh I don't think so, could not see any of that fancy stuff so we opted for the.. just go in an upward trajectory.
It did not look like shorts were going to be used today. Wish I had packed shorts Then again maybe not

Is that Darth Vader? (its all in the breathing). The fresh snow was tough going but nevertheless we set off in persuit of the 'gazelle' in front. (Boy was he going to get a surprise when he sees Darth V! 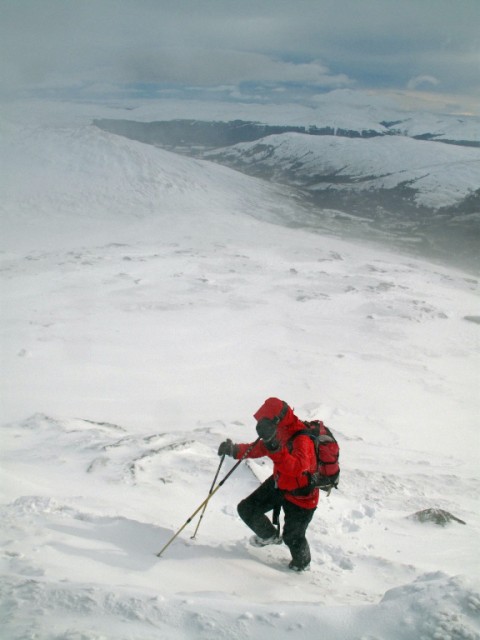 She just won't give in. Looking back to Glen Lochay

The books also make reference to the peat hags (they are in the background of the pic above)– this normally would be an excellent way of repelling tanks and people of an ambivalent disposition but we found a way round them without any major issue by staying as far to the left as we possibly could whilst still maintaining ascent.
Visibility was poor and the wind was from the north making progress ‘challenging’. Indeed so much so that our point man – the 'gazelle' was now waiting for us to catch up as he had decided that now it was time for us to do the leading. It was at this point that the cloud cover did lift and it became apparent that we would now have the chance of a cloud free summit. All of the slog would be worth it. It might not be the best Munro in the world but today we would be fortunate to enjoy the vista from the summit.
This is such a rich and fulfilling picture that many may wish to make this a screen saver but for the moment when the wind was battering my eyes this was all I wanted to risk opening my camera for. OK - not quite the hanging gardens of Babylon but I have lost two camera's to weather before - NO MORE!!!!
OK we had reached the summit – yes the cloud had lifted but the wind at the top was to say the least, challenging to anything above ground level. It was in fact so strong that I was unable to even look in its direction due to the spindrift and its force. It may well be that the vista was indeed worthy of inclusion in my Top 10 favourite views of all time but I will never know. But I did take this good pic of my dear wife... As we huddled at the cairn and ‘windbreak’ (just don’t start me on that one) to eat our feast + tea in the hope that all would relent. Alas, it was not to be, so we left the top leaning back at an angle of 35o to make our descent. It did not take long and the wind abated and the clouds parted and it was clear we were now pardoned. The views were spectacular- well they were from 15 mins ago! View looking out from the cairn (South). Great views to the south Coming off the top the wind which was NW was sorted and we now enjoyed the sun + the shelter: excellent. Now, remember what I said earlier about the clever negotiation of the peat hags – well little Mr complacent here did not descend with the same attention to detail that featured so well in the ascent. In one little ‘incident’ I sunk up to my chest in snow with my right leg still not hitting terra firma. This may seem a laugh but not being able to push up meant I was unable to extricate myself from the hole. Fortunately, my life insurance policy is poor and so my wife felt it appropriate that she stop laughing (that took a wee while – but I am a patient man. Especially when in a hole) and haul me out. Our new found walking companion came in very useful at this point as I wondered what I would have done had this happened on my tod!
A few views.... 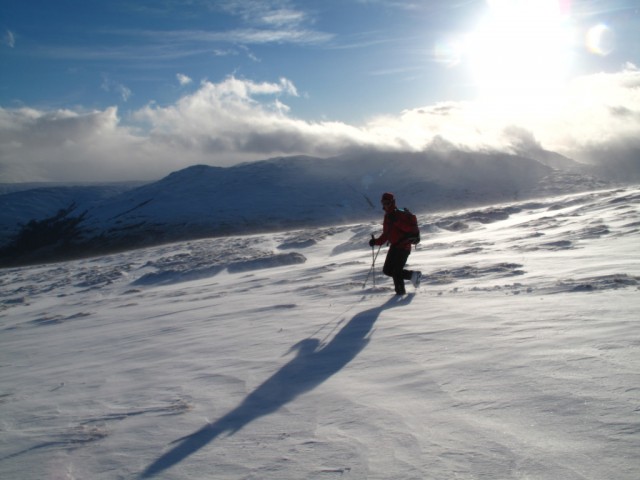 Eventually we rejoined the path and made our way back to the car.

The second day the weather had bucked up its ideas got its act together and allowed us the opportunity to marvel at the spectacle that surrounded us. Got this one on my list - nice to see what it'll be like although hopefully I'll get more of your later views. Great stuff.