Left house at 7-30am, stopped for coffee and energy bars and got to Grant around 8am. He hadn’t had his breakfast. So hung for 15 while he did that. As we left his drive, the sky to the West looked very dark. By the time we got to Perth on the Crieff road the rain started. It got progressively darker and wetter as we drove towards Crainlarach.
It was bouncing off the road as we passed Benmore Farm , the start point, so we continued on to Ben More Lodge hotel and had a coffee and bacon roll. This turned out to be the highlight of our walk.
As we finished our elevenses, the rain eased so we decided now was our time. A  mile drive to roadside parking and we headed up the hill aided by a Ben More sign directing us over a stile and up a track. We zigzagged up the path until we reached a gate. By this time the rain had been turned on again.
We had a choice on the other side of the gate, as the path diverted right or turned left. We pondered and then went left. Unsure we marched on and were encouraged when three behind us made the same choice. After 15 minutes there was a junction right up the hill. This seemed a logical choice but a brief excursion showed it to peter out after 50 yards. By this time the 3 behind had caught us. We asked them if they knew the route but it turned out they were following us, no matter there was another sole walker just 50 yards away and closing. Again he was just following us.
Grant and I headed forward again on the main path. After 10 minutes that path came to an end. We remembered the notes said the path was indistinct for a while so we took a 90 degree right turn up the hill. The terrain was boggy the rain was stair rods. The solo walker followed and soon overtook. After a couple of hundred yards yomping up the near vertical bog I stopped. Grant was way behind so I waited on him catching up. The choice was keep on over the bog uphill or turn round and go back. I had persuaded myself that I could see a path off the earlier spur on the main track, so we set off downhill in search of it.
By this time we were absolutely drenched but the rain had at least eased so I took off my waterproof and descended back down the bog. I didn’t think I could get any wetter, however a slip onto my bottom proved that in fact I could.
We encountered the 3 others scrambling up the bog to our right. I had a quick chat, took their photo and left them to their attempt for the summit up the drenched hillside. We tried to find the track upward again but it proved to be a stream and not a track.
Disappointed and soaked we decided it was time to head home. The rain was intermittent but mist kept drifting in and out reducing visibility to a few yards then lifting, allowing sight of the elusive summit. We got back to the first junction near the gate and thought we would try the right fork just in case, this was for research only, as we had already decided to call it a day on any summit attempt. After 2 or so steps up the right fork there on our left was a stone staircase. We stopped and laughed at our stupidity, well you have to really.
I walked up it for 30 or so steps and it revealed a path stretching upwards until it disappeared in the mist.
The walk description says Ben More is unrelenting in its ascent, today it proved to be unrequited.

I drove past the start point for Ben More yesterday at 11am. There were 2 or 3 cars there and I thought some poor souls on Ben More 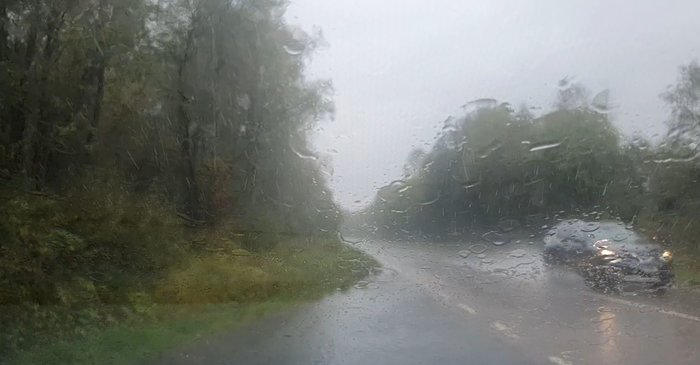 I think you made a good decision.