Given the weather forecast I thought I would get back out there, can't pass up the opportunity of some September walking without rain!

Had my eye on the Great Trossachs path for a while, given its easy access from Glasgow, thought I'd do it in reverse though, starting at Callander and ending at Inversnaid, can't beat a nice boat trip to end a journey ( starting from Callander also had a huge bearing on being able to complete the walk, more on that later).

A later than planned start due to a late night before meant I only arrived in Callander at 12 noon, still time to stop off for an excellent scotch pie and a cake at the bakers before starting, planning on taking it easy and completing the walk over three days, so plenty of time. 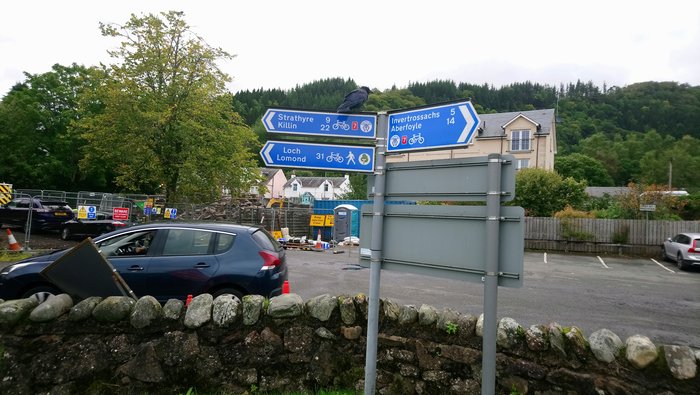 Callander to Brig O Turk a nice walk with cracking views over Loch Venachar, quite a busy trail and stopped for a few chats along the way, overcast, not too hot and just enough breeze to keep the midges at bay, it was great to be out! Slight disappointment as the tea room in Brig wasn't open (I have a cake deficiency in my diet, its a medical thing) , but onwards and upwards.

Loch Achray next, with Ben A'an starting to poke over the hills and time for a brew up and shoes off for a while. 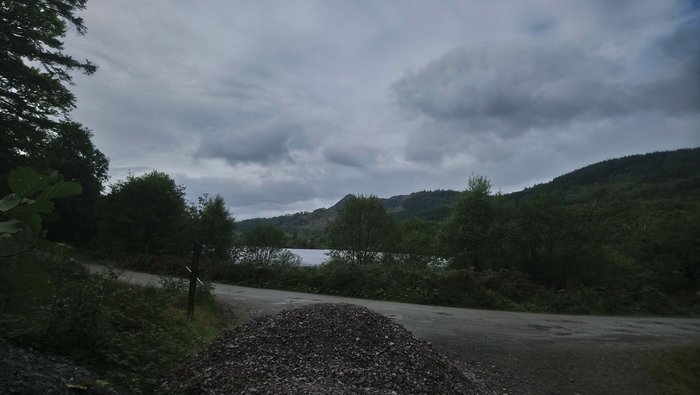 Ben A'an behind the tree, not the mound of gravel I was sitting beside for a coffee!

A half hour rest and I was ready to head off again, next stop Loch Katrine with some more beautiful woods on the way, so good to see real woodland rather than dense forestry monoculture! 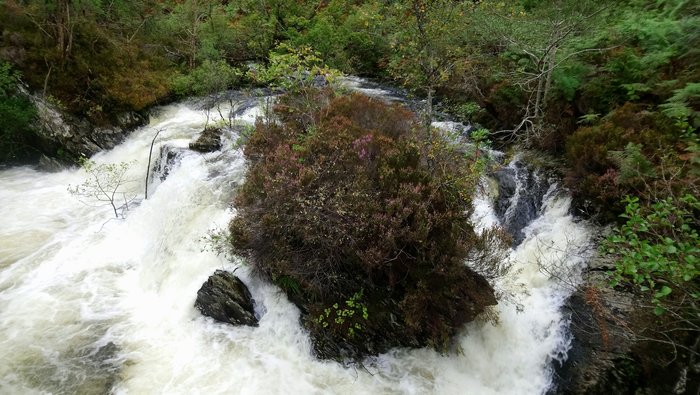 Must have been distracted by the nice waterfall, took a wrong turn and ended up by the Loch Katrine dam rather than the pier, oops! Hastily retrace my steps and onwards in the right direction this time.
Upon reaching Trossachs pier and starting aling the lochside road the first shadow of doubt arose, ROAD CLOSED TO VEHICLES AND CYCLISTS sign... Hmmm but I'm walking, should be OK!

So sign forgotten about it was pushing along the Loch to find a campsite for the night as dusk approached.
Brenachoile point proved to be my bed for the night, unfortunately with the approaching gloom and dropping wind, the ravenous midges appeared and seemed determined to stock up on blood before the approaching winter! 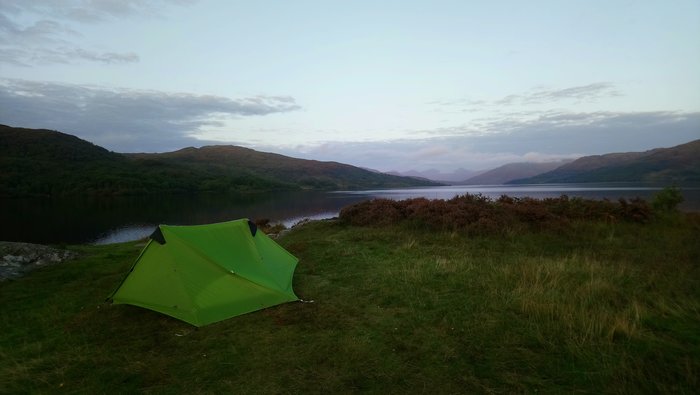 After a great night's sleep dawn broke clear and calm (more midges), a quick breaking of camp and check that I'd left the area as I found it and I was back on the trail, looking for somewhere high sunny and breezy for a cuppa away from the midges. 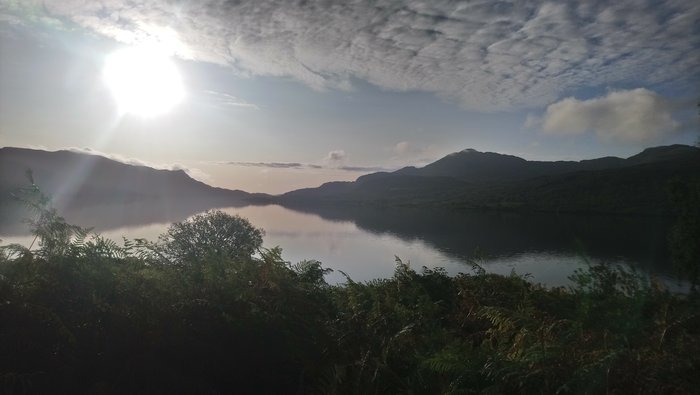 Back on the trail after my refreshment, it was ever onwards, avoiding the road as much as possible and taking smaller footpaths and game trails along the lochside, I returned to the road just before the MccGregor burial ground (Rob Roy isn't there!) as the lochside route was too tiring beating a path through all the ferns (and wearing shorts I was tickbait). 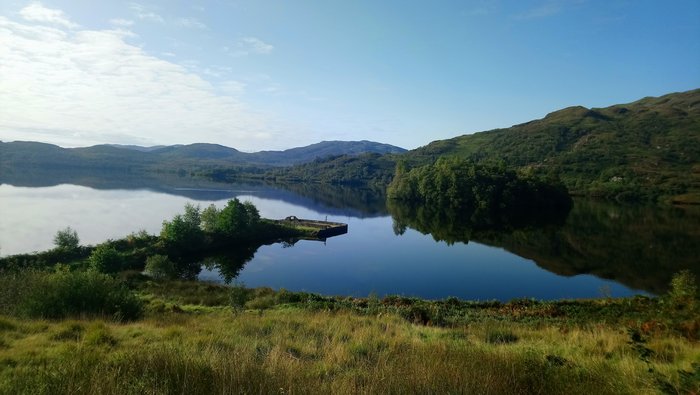 Sun getting higher and the day warmer I continued along the road... And ran into a portakabin and gate, a very polite guard advised that the road was closed and I couldn't go any further, scunnered!

Stopped and had a chat, advised him I would head up into the hills and contour round the closure and he got on his radio to speak to the site manager to explain the situation (20 miles back to Callander to exit the route for me via public transport if I didn't press on).
The site manager was very understanding and came and picked me up from the gate and halted all works for two miles as he drove me through the site (landslip and culvert replacement) and dropped me at Stronachlachar pier. 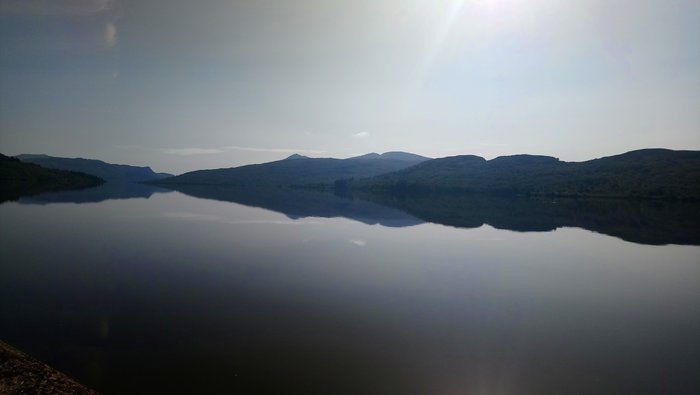 No cake pic (chocolate cupcake!) as it didn't last long enough to have its photo taken, a pic of the view will have to suffice.

After a brief rest and a chat with a number of people about the closure, anyone heading west to east was denied entry to the site (good job I was going east to west!) I headed off on the last stage to inversnaid, well ahead of my planned schedule (not as unfit after lockdown as I thought! Although the two mile car ride helped too!).

The last stretch along Loch Arklet to Inversnaid was almost a letdown compared to the glorious views earlier in the walk, but still stunning.
Arrived at the inversaid Hotel at 13:00, hours ahead of schedule!
Time to sit in the sun and await the ferry! Luck was with me as a glasgow bus pulled up as I arrived at the bus stop in Tarbet, home before tea time!
A great wee walk with fantastic views in some glorious September weather, I'll certainly do it again (once it reopens!)

A good walk for anyone wishing to dip their toes into trail walking and camping, just remember to leave no trace, its too beautiful a part of the country to spoil!

Re: The Great Trossachs path.. Not so great as it isn't open

Ps.
Went on to Scottish waters website this morning to leave a positive comment for the works site manager and the security guard, can't thank them enough for their assistance and understanding!