I'm surprised how few hillwalkers climb An Ruadh-stac, despite it being such a splendid mountain. Even WH stats speak for themselves: nearly 3000 ascents recorded for the Munro, only 480 for the Corbett. I could understand it if AR-S was a boring heathery lump in the middle of nowhere, but it is one of the best tops in Torridon and it can serve as a great scrambling training ground. Vistas are just as good as from any mountain in this area and the multitude of lochs and lochans surrounding the Corbett adds extra points to the views. An Ruadh-stac is a hill to be enjoyed - and respected. Shame it is kind of neglected and forgotten, seen as a sidekick of Maol Chean-dearg which it is not. It has its own character, its own soul and is worth saving for a sunny, dry day

We had already climbed this hill but it was eight years ago, so we were eager to re-visit. We used the obvious route from Coulags and on the way back took a small detour over Meall nan Ceapairean:

Track_AN RUADH STAC 16,8KM 1.gpx Open full screen  NB: Walkhighlands is not responsible for the accuracy of gpx files in users posts
We took the last free spot in the small car park at the start of the route: 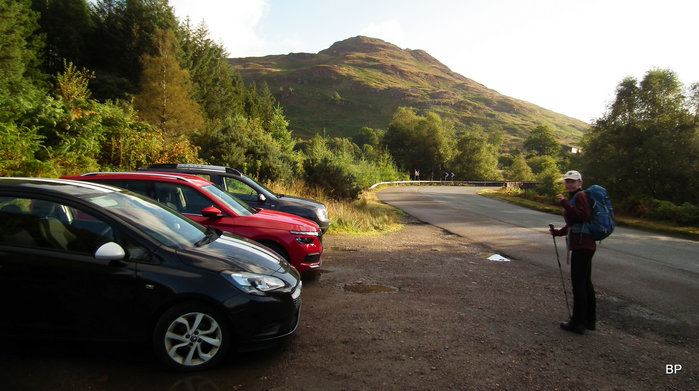 The initial stage of the walk follows a wide hydro track. Las time we were here, a couple of years ago I think, the hydro scheme was still under construction and the glen looked a mess, but I must admit that the situation has improved significantly since. Only a short section of the track remains as it leads to a small building (the generator shed probably), the rest has been covered and the vegetation is already returning - the scar not fully gone just yet but healing very quickly.
The track at the start, our hill in the background:

A nice, new footbridge was built over one of the smaller streams: 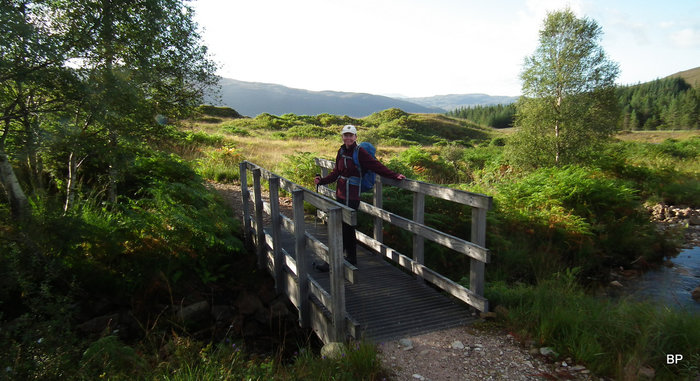 The hydro dam is not a big sore in the eye: 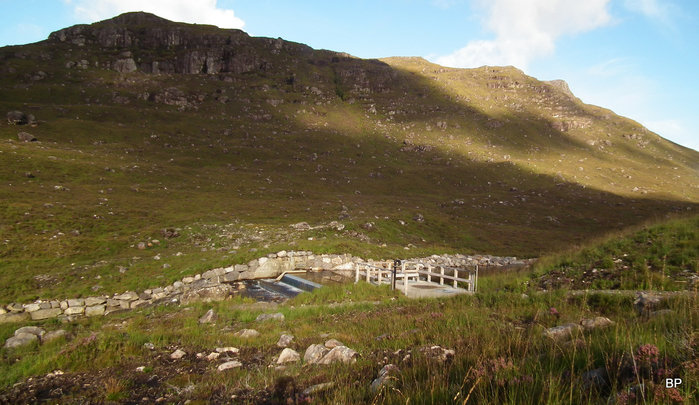 The old footbridge over Fionn-abhainn is still there, if missing a few planks. Walking along the river to the bothy was very pleasant, a few keds but nowhere near as many as we suffered in the previous weeks, hopefully the biting-stinging-wriggling season is coming to an end! 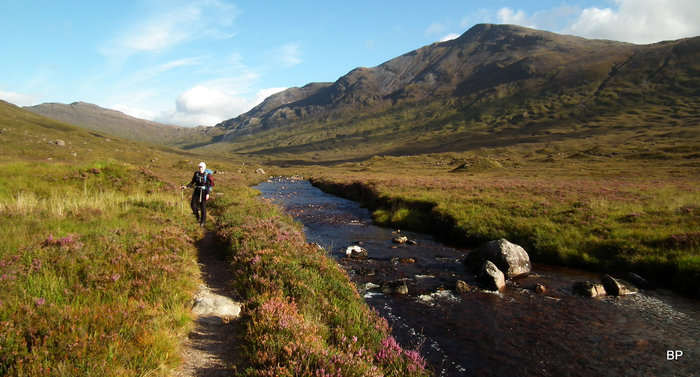 Nothing has changed since our last visit. The Clach nan Con-fionn stone still standing: 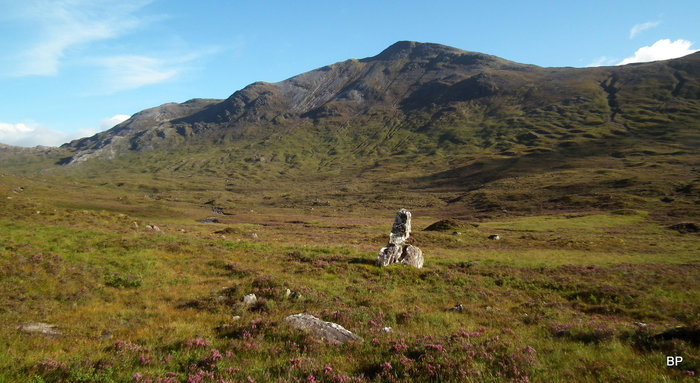 The path divides 1km past the bothy, we took the left branch, climbing to the Bealach a'Choire Ghairbh. The day was warm but as the path leads alongside a small stream, we had no problems with hydration: 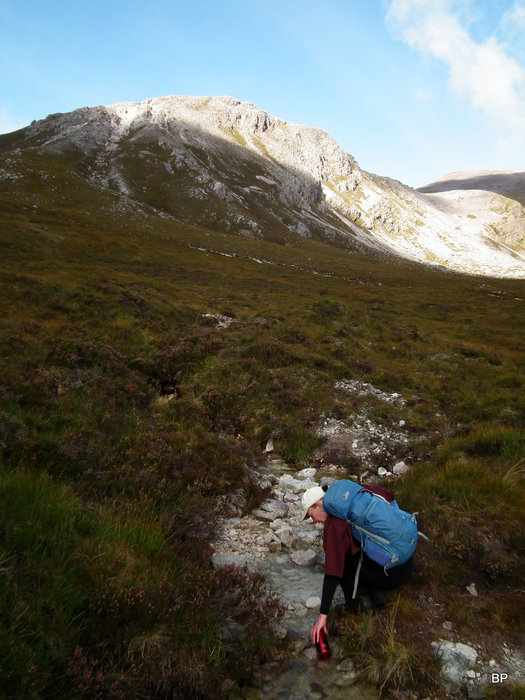 It was still quite early and we saw only one person higher on the ridge of Maol Chean-dearg. Later, from the higher slopes of An Ruadh-stac we spotted dozens of walkers - ALL heading for the Munro! We had the Corbett all to ourselves 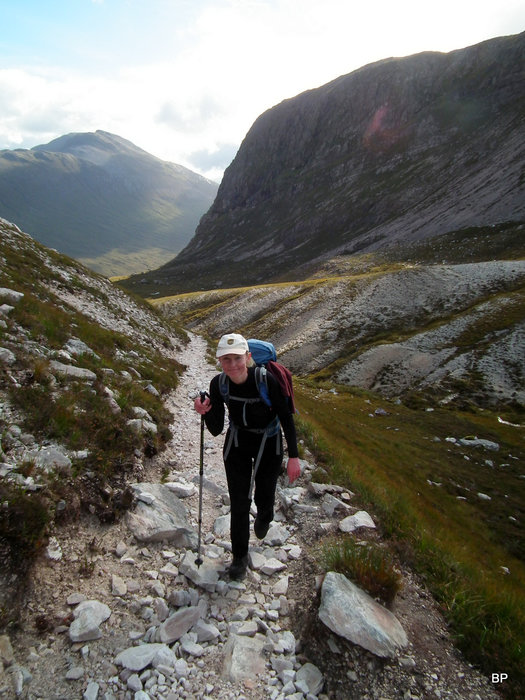 Every time we're doing this walk, the best moment is arriving on the bealach and seeing the shapely lines of An Ruadh-stac. The Lady in White, I call it (her?), gently sculpted in quartzite: 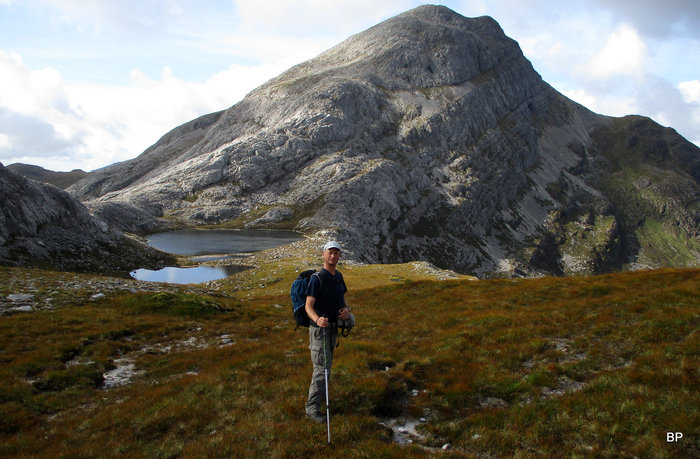 She might look intimidating but the initial impression is misleading. There's nothing technically difficult about An Ruadh-stac. The angle is much more acute than the ascent of Maol Chean-dearg, more rocky and eroded, also, one can do as much scrambling here as pleased, but the harder bits can be avoided. The slabs of An Ruadh-stac could be dangerous in wet conditions, as the quartzite is very slippery when wet, but on a dry day... Hey-ho, let's go!

We decided to walk around Loch a'Mhadaidh Ruadh, just to vary the route a bit. This side is rocky but one gets a better vantage point to the vertical side of the Corbett:

We tried to take a break by the loch, but as soon as we sat down, we were attacked by midges, so changed our mind and went on to the top - on higher ground the wee black army was dispersed by wind.
Beinn Damph seen from Loch a'Mhadaidh Ruadh with two other lochs in the frame: Loch na Cabhaig (the higher one) and Loch Coire an Ruadh-staic: 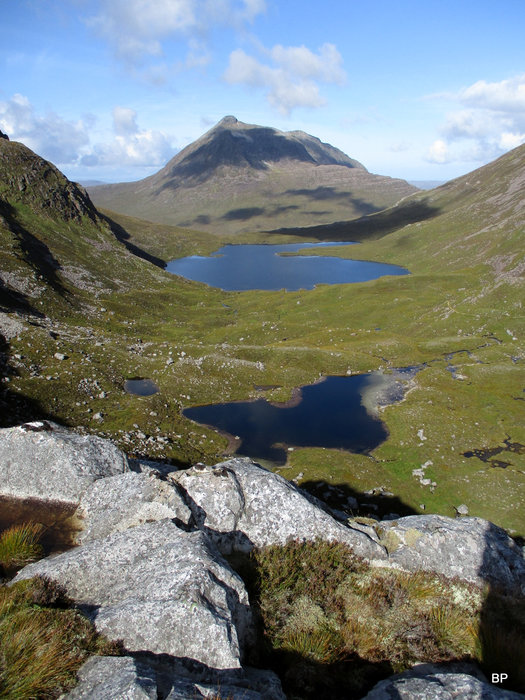 Ehmm... Do you know what you are doing, panther? 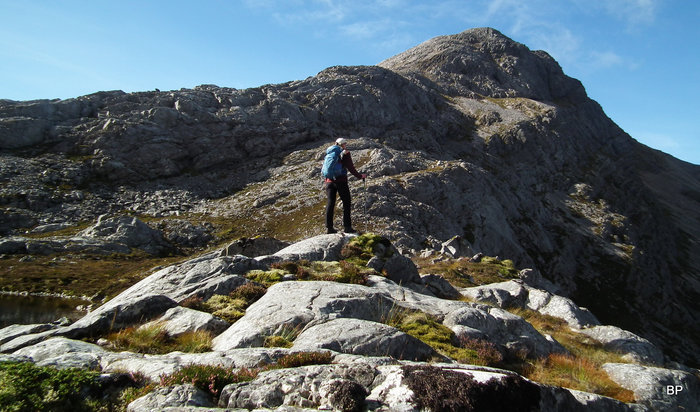 Having done this route in the past, we knew there was nothing to be afraid of here, but Kevin still assessed the rocks with caution: 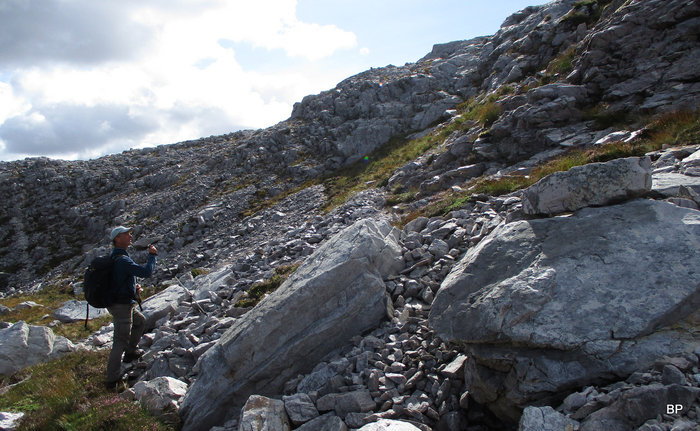 The first section of the final 300m is mostly on smooth slabs, in dry conditions, piece of cake: 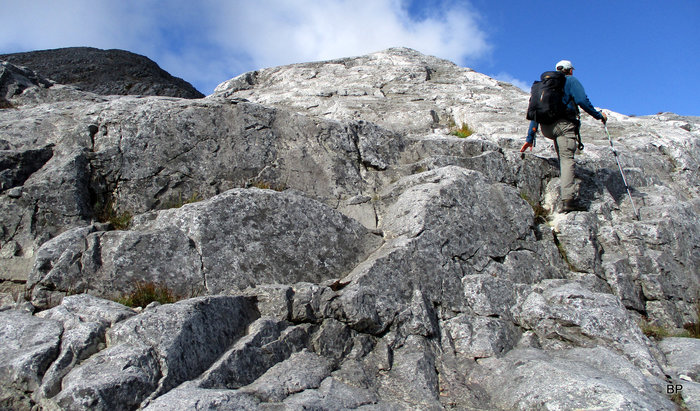 Fun on the slabs, Meall nan Ceapairnean in the background, with Fuar Tholl and Sgorr Ruadh behind them: 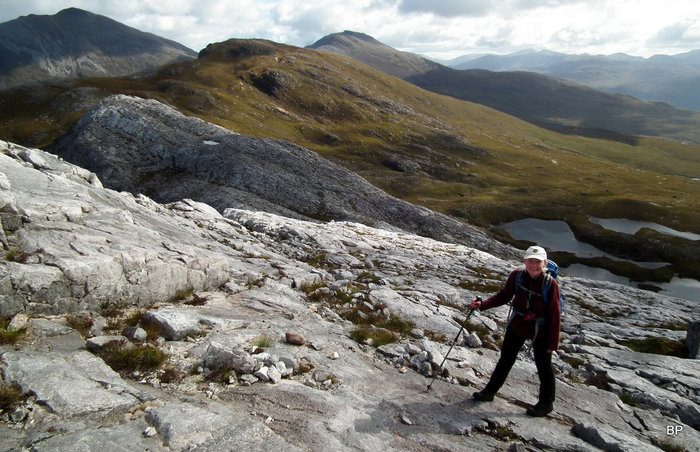 After the first 50m or so, if you don't fancy scrambling, look for a faint path to the left hand side, it is very eroded but it avoids all technical difficulties. We decided to stay close to the edge of the cliffs, this is a bit harder line of ascent, but more entertaining as well 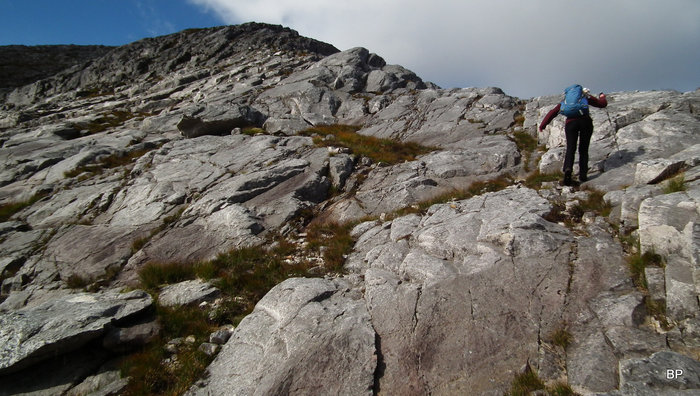 How to make your man smile? Take him up a mountain and let him loose 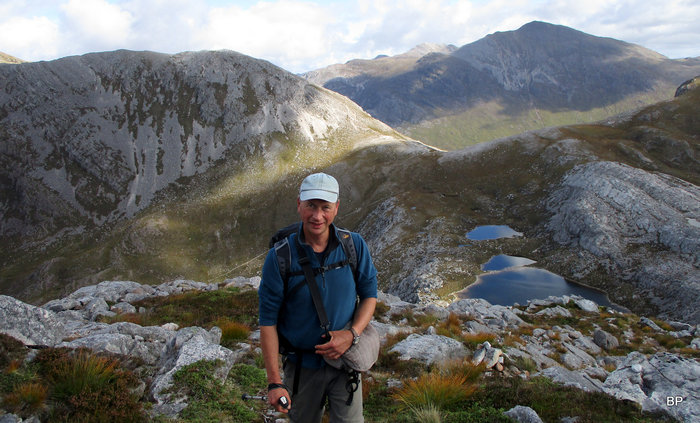 At some point, the ground became quite eroded, lots of loose scree and large rocks. The exposure could cause problems to some, but we had done much worse slopes/ridges in the past... 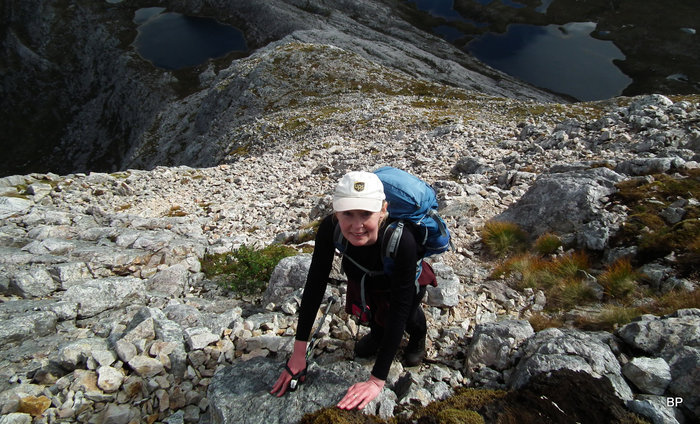 On an easier stretch, taking in the views and enjoying the good weather as long as it lasted... Summer is not going to stay forever 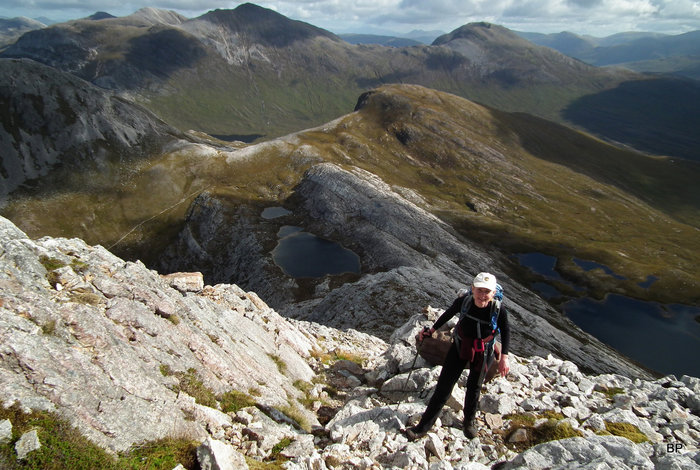 Views were now opening up to the north, to the giants of Torridon. Beinn Alligin and Beinn na h-Eaglaise:

By sticking to the edge of the cliffs, we found some interesting pockets of scrambling, mostly easy enough to enjoy them without tearing trousers and getting blue bruises all over your body 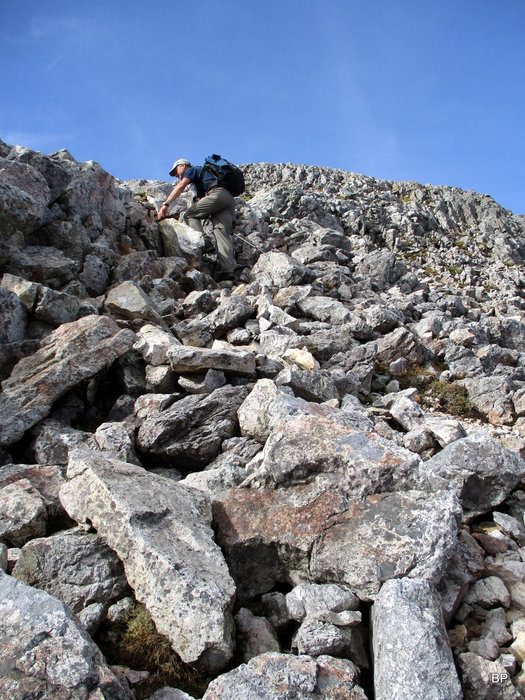 Eventually, we emerged on the rocky summit. It was already half past two - we spent far too much time having fun on the slabs, but who cares. We never planned to add the Munro anyway (we had already visited it twice so no pressure). We sat by the cairn for some time, enjoying the last touch of the Scottish summer. Lucy was happy - she climbed a new Corbett (her 115th): 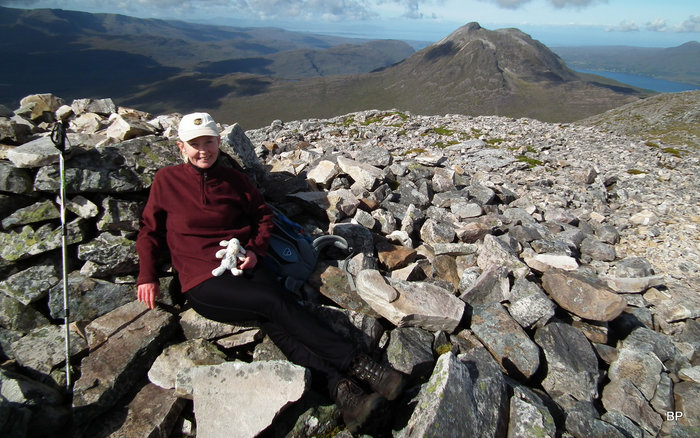 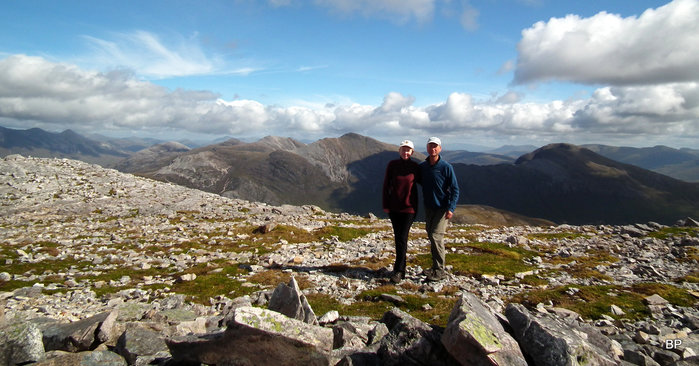 Panoramic view of the northern Torridons including Maol Chean-dearg, Liathach and Beinn Alligin:

Sgurr a'Gharaidh, a rather neglected Graham on the western edge of Torridon, really recommended as a full traverse:

South to the peaks of Strathcarron:

A short wander around the summit area, with Sgorr Ruadh and Fuar Tholl as a background:

There is a possible escape route if aiming due south from the summit then turning east over Ruadh Stac Beag and Meall an Daimh but we were discouraged by the peat-haggy ground on the lower slopes so decided to return the way we came, with a detour to Meall nan Ceapairnean as WH description suggests. When descending the steep section, we drifted to the left to follow a sketchy path over the eroded slopes. It wasn't a pleasant experience in descent, very wobbly and unstable, but lower down we simply hopped down the slabs like a pair of happy bunnies. Because happy bunnies we were! Having climbed such an entertaining hill, anybody would be a happy bunny

Kevin taking a hydration break at the bottom of the slabby section: 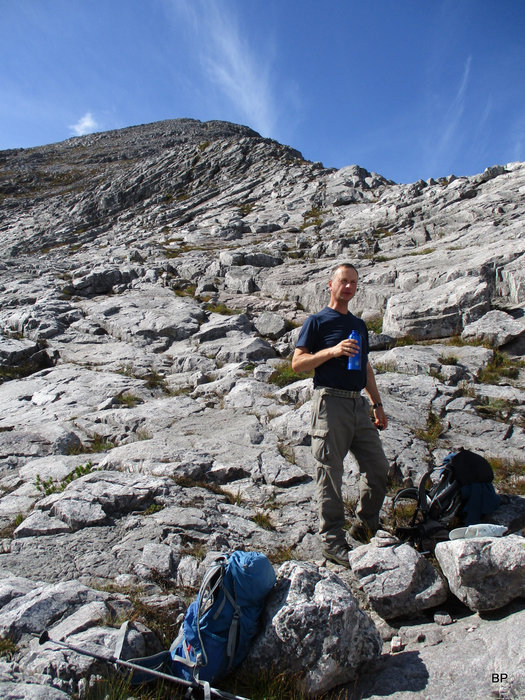 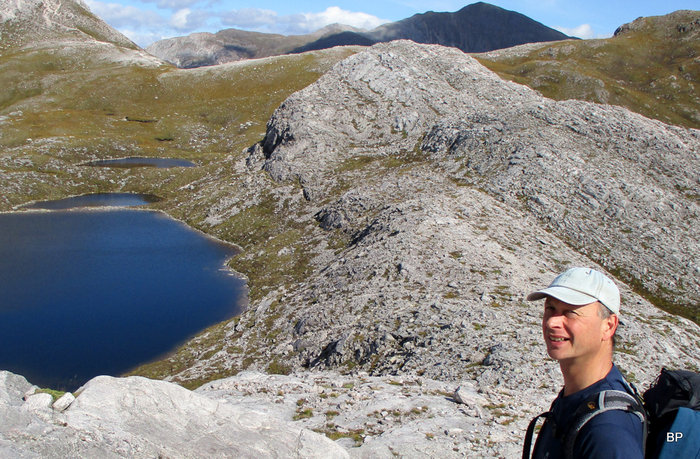 One last pose with the mighty slabs: 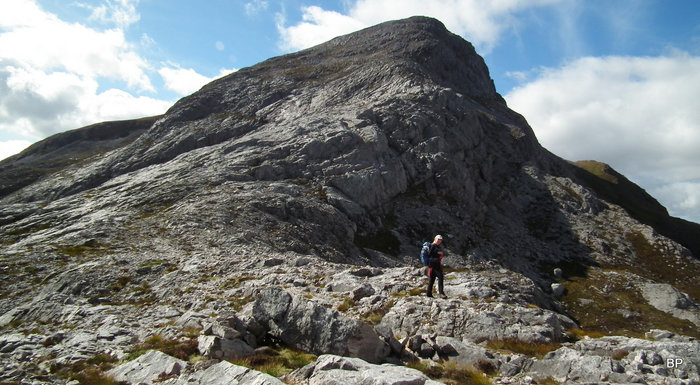 The traverse to Meall nan Ceapairnean didn't take much time with less than 100m of reascent (it is a Simm though, are we now bagging Simms???) and it is well worth the detour as it offers stupendous views to the duo of An Ruadh-stac and Maol Chean-dearg:

Finally, we followed the southern ridge of Meall nan Ceapairnean, nice gradual descent along the mighty cliffs with plentiful opportunites to strike a "me on a rock" pose:

The mighty cliffs with big Torridon hills on the background: 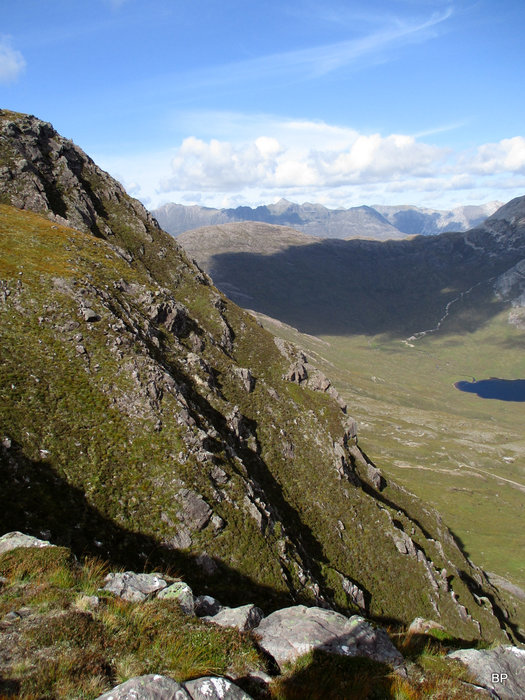 Sgorr Ruadh and Fuar Tholl seen from across the glen:

The last 200m of descent to the bothy was steeper and wet, but Kevin still found time to take more photos: 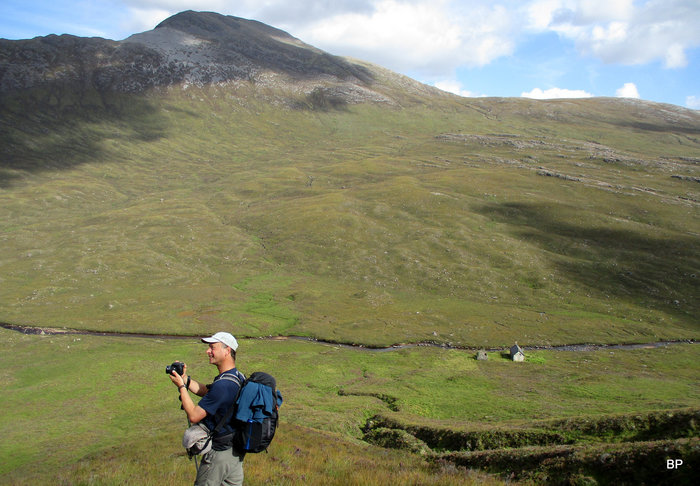 An Ruadh-stac is a good example of an excellent Corbett that suffers badly from being so close to so many Munros. Had it been 25m higher, it would be visited by crowds. I think most Corbetts in Torridon are underestimated (apart from Beinn Damph perhaps), but Fuar Tholl, Baosbheinn, Beinn an Eoin and most of all, Beinn Dearg, offer fantastic days out with a lot of optional scrambling (or not really optional in case of Beinn Dearg). I remember when we climbed BD, the car park was full to bursting but we were the only people doing the Corbett, the rest of the happy crowd went up the Horns of Alligin. On the other hand, maybe it is for the better that some hills are less popular. At least we could sit on the summit in silence, without somebody's dog begging for sandwiches or people giggling and shouting on the other side of the cairn. I like meeting other folks when hillwalking, but sometimes one just wants to taste the solitude

And that's what the Lady in White offers in abundance.

I agree that all of the Corbetts that you mention including An Ruadh-stac are finer days out that many of the Munros.

That's a fine hill as you say and looked like a brilliant day. It's a great path from Coulags, easy walking.

I like Maol Chean-dearg too, where recently as I approached the top there was a golden eagle sitting on the cairn.