The road beside Ben Hope is one of my favourite Highland drives. With the Ben on one side and a row of Corbetts and Grahams on the other, the view south is hard to beat, and the return doesn't disappoint. The road itself is better maintained than some but has some patches of grass in the middle, and enough bumps to scrape the bottom of my VW several times on the way - another reminder that I don't drive a 4x4 any more.

After a careful meander I found a decent parking spot and set off across the heather. My targets were Creag Riab(h)ach Mhor (the first H is missing from my OS map) and its twin, Creag Riabhach Bheag, which form two ends of a little ridge beside Ben Hope. Most of the walk was getting there and back, but it's none the worse for that - there are plenty of burns and waterfalls to garnish the route. 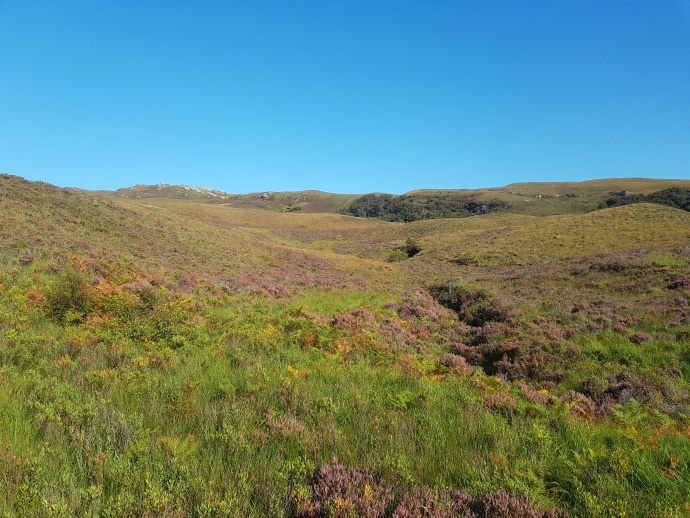 The first stretch was decidedly lumpy, both underfoot and on a larger scale - a lot of bumps and hillocks, some of them too small for the map. I love this kind of landscape, even though I'm constantly wondering whether I've chosen the best route. After a few minutes a tiny waterfall came into view, with an improbably loud background roar. It turned out that two rough burns met nearby, and both had a collection of falls to add to the noise. The sun was beating down and I was tempted to take a dip there and then, but wasn't sure about being soaked for the rest of the walk. 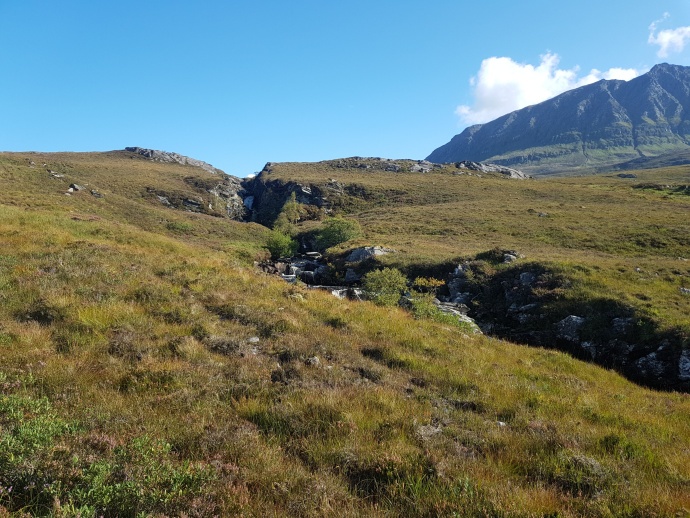 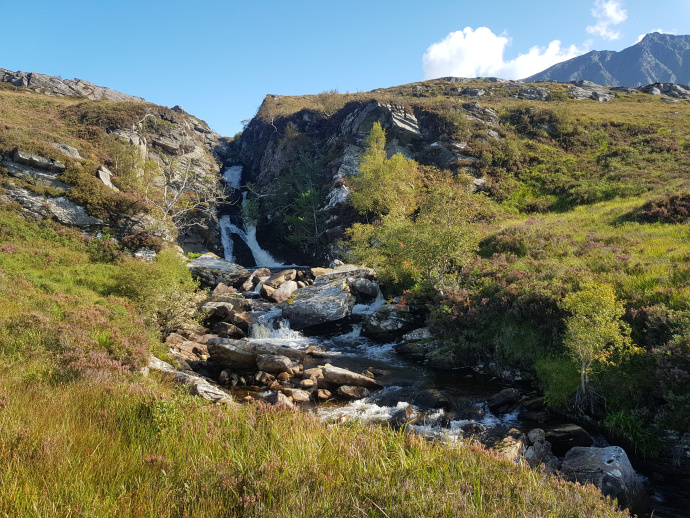 One of several falls... 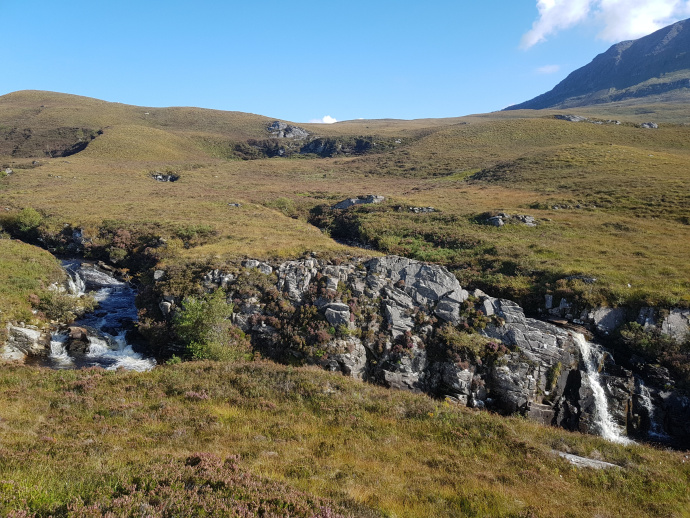 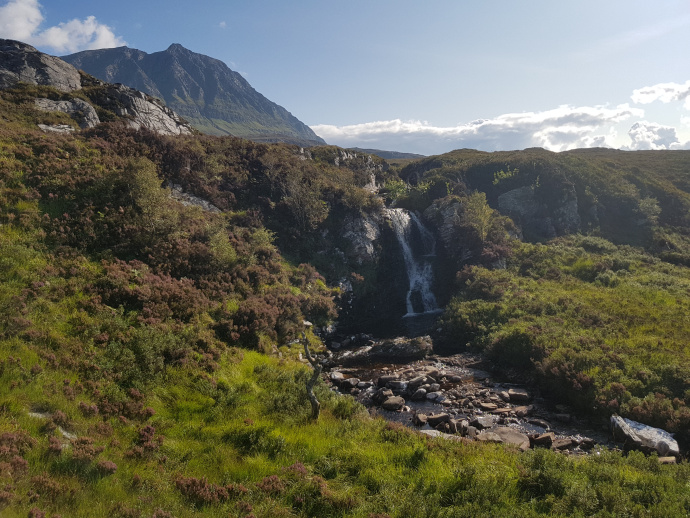 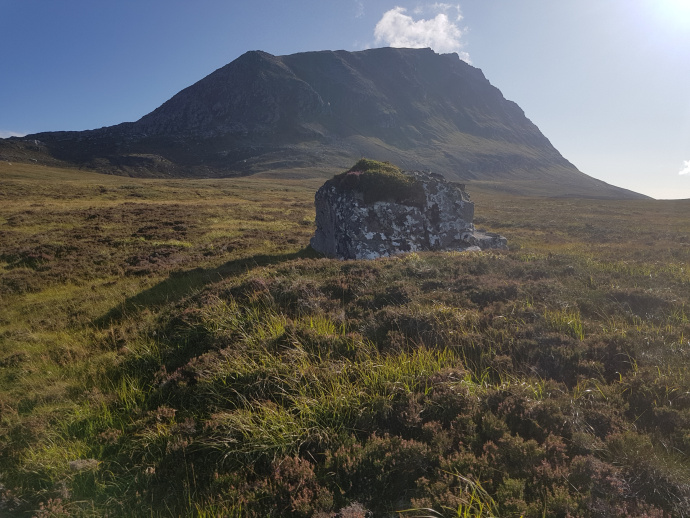 Ben Hope hiding behind a stone

After a while I met the Moine path and followed it briefly, but decided the direct route would be better. More heather-bashing followed until I reached the shores of Loch na Seilg, which today managed to look somewhere between a sheet of glass and a tropical lagoon. Ok, maybe the sun was getting to me. 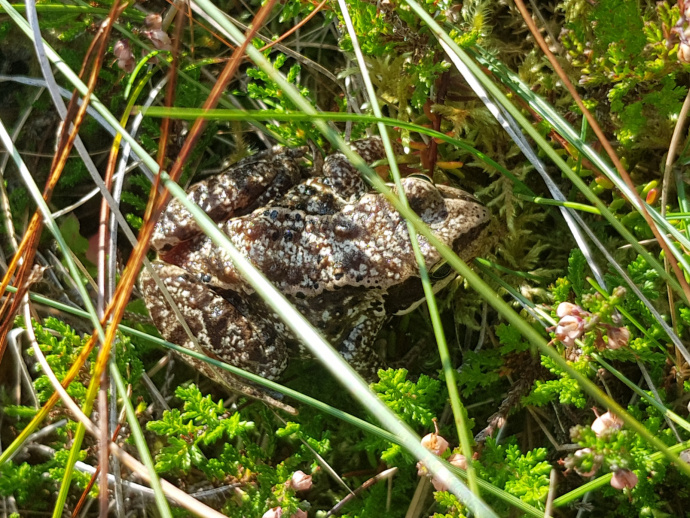 These chaps were abundant, but I thought this pattern was unusual 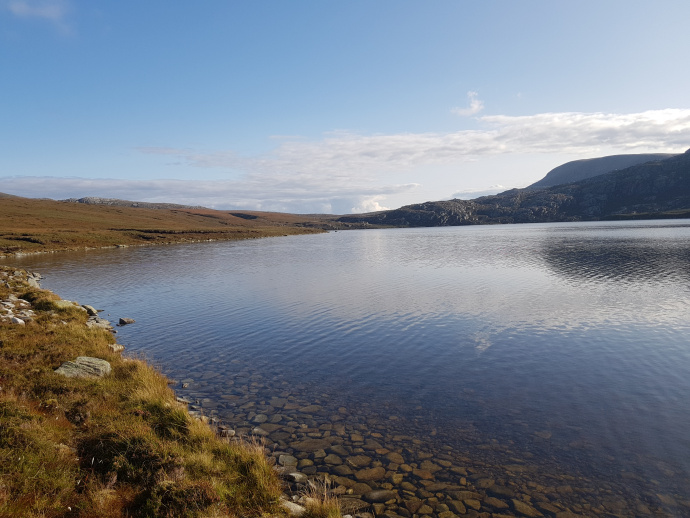 The least pleasant part of the walk was negotiating the huge peat hags that cover the slope to the east of the loch. I then detoured right to make a full traverse of the ridge, starting in the gap near Meallan Liath, which was already high enough for some good views east. 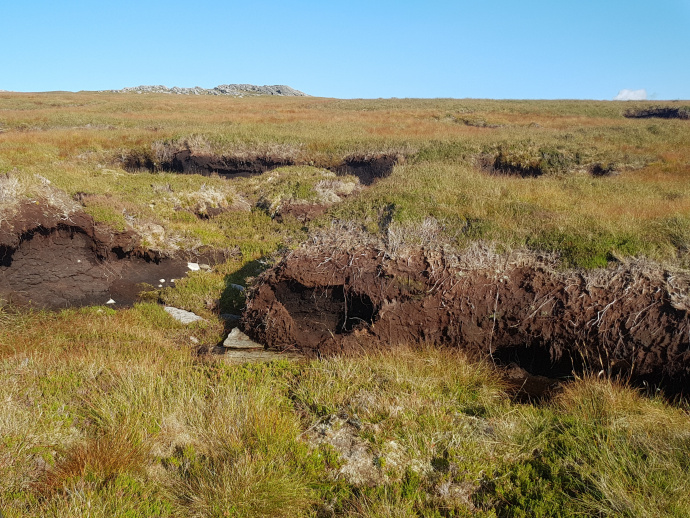 Kyle of (and Ben) Tongue and a bit of Borgie Forest 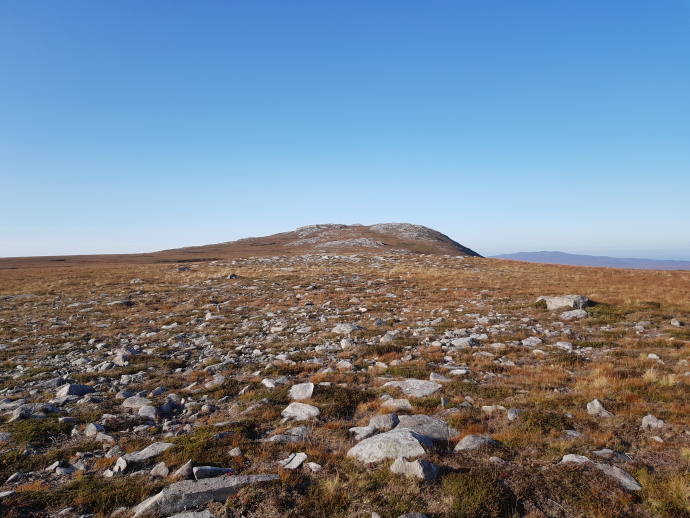 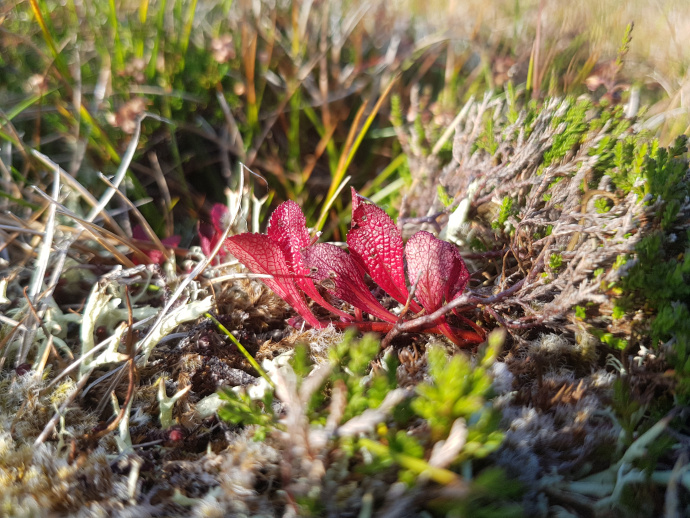 Red leaves near the top

C.R. Mhor had two craggy tops and Bheag made a third. It struck me that all three had a very similar character, which was different to either Meallan Liath or Ben Hope despite them being near neighbours. On the second top I felt a couple of insects crawling on me - I didn't recognise them but wondered if they were flying ants. They were robust wee beasties, and despite my attempts to lose them I was surprised to find both of them still hiding in my hair when I got home. The loch and beyond 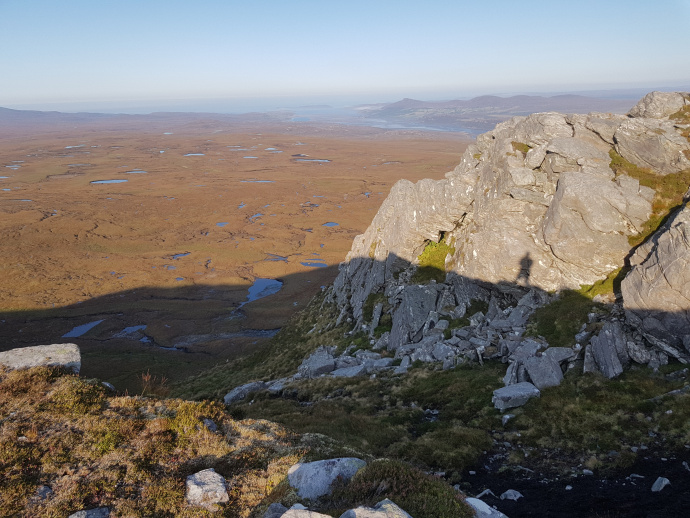 Looking NE from the top 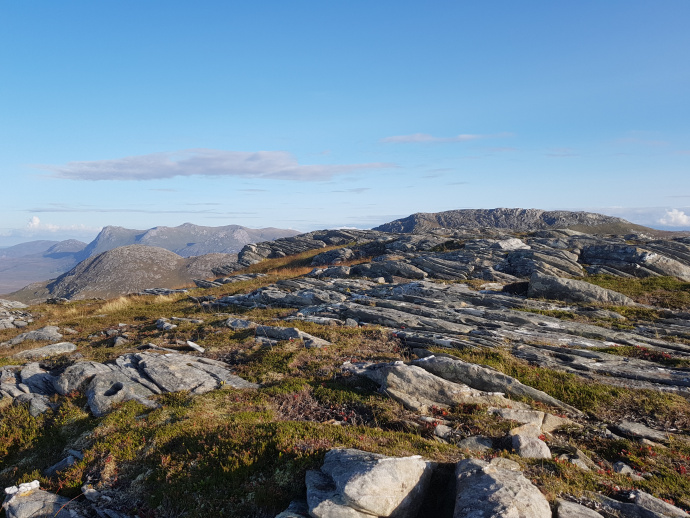 Looking back, a bit of Ben Loyal showing Looking NW from the second top... 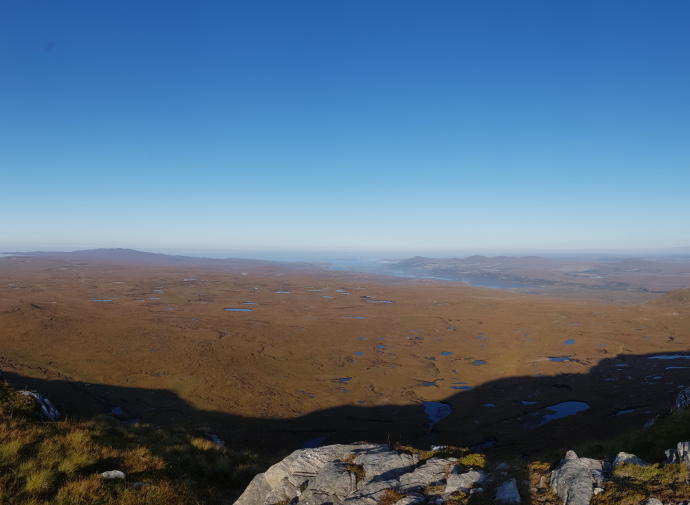 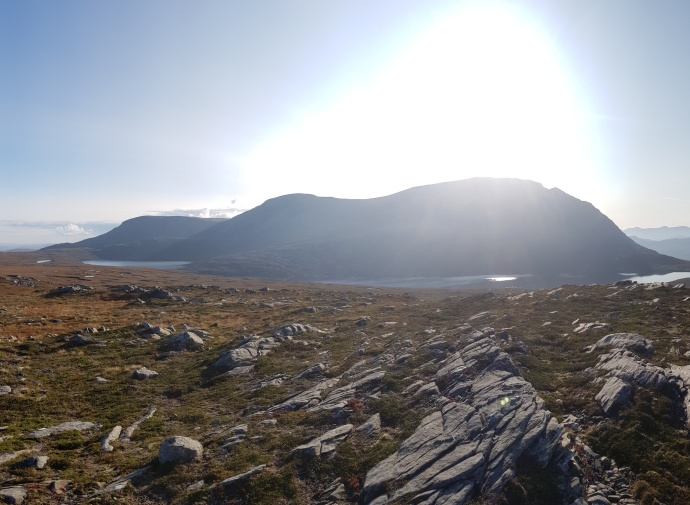 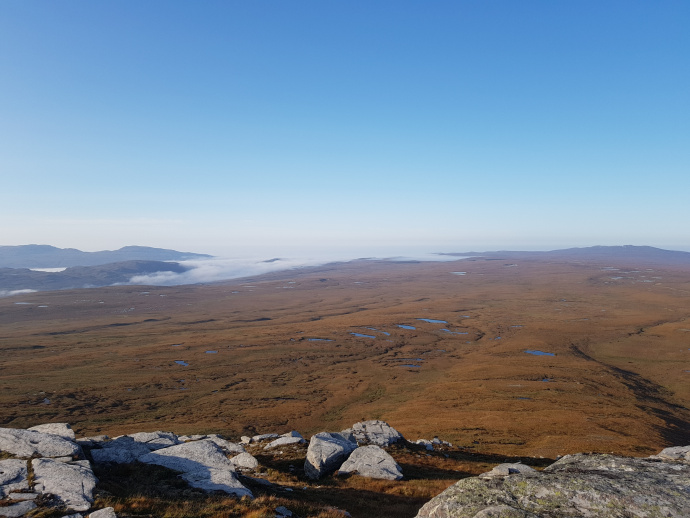 Back along the ridge from Bheag A crag on Creag Riabhach Bheag Looking back at the north of the ridge

From the end of the ridge I heather-hopped to the path then followed it for 15 minutes until it crossed a branch of An Garbh-Allt, which I followed down to the waterfall and pool I saw earlier. I arrived there exactly as the sun was dipping behind An Lean-Charn and this time I did make use of the gloriously cool stream. I didn't drink from it, though - although the area seemed deserted, on a day like this one can never rule out the possibility that some clown is taking a dip further upstream. 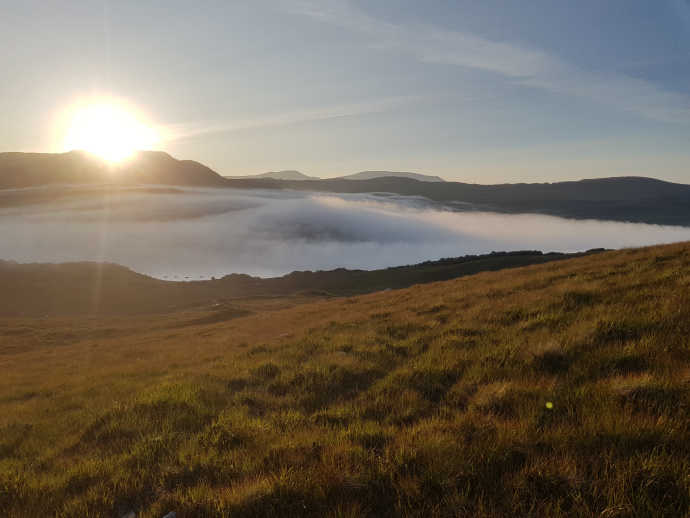 Now the mist was rising from Loch Hope The last view of the sun A last look back - Hope rising from the mists


Riabhach.gpx.gpx Open full screen  NB: Walkhighlands is not responsible for the accuracy of gpx files in users posts